Imagine Covid doesn’t exist and you have a day off from work. You are free to spend the day doing exactly as you please. Inspired by U2’s It’s a Beautiful Day – “It’s a beautiful day, don’t let it get away” – we asked Wilson Pipkin to describe his perfect Lancaster County day. 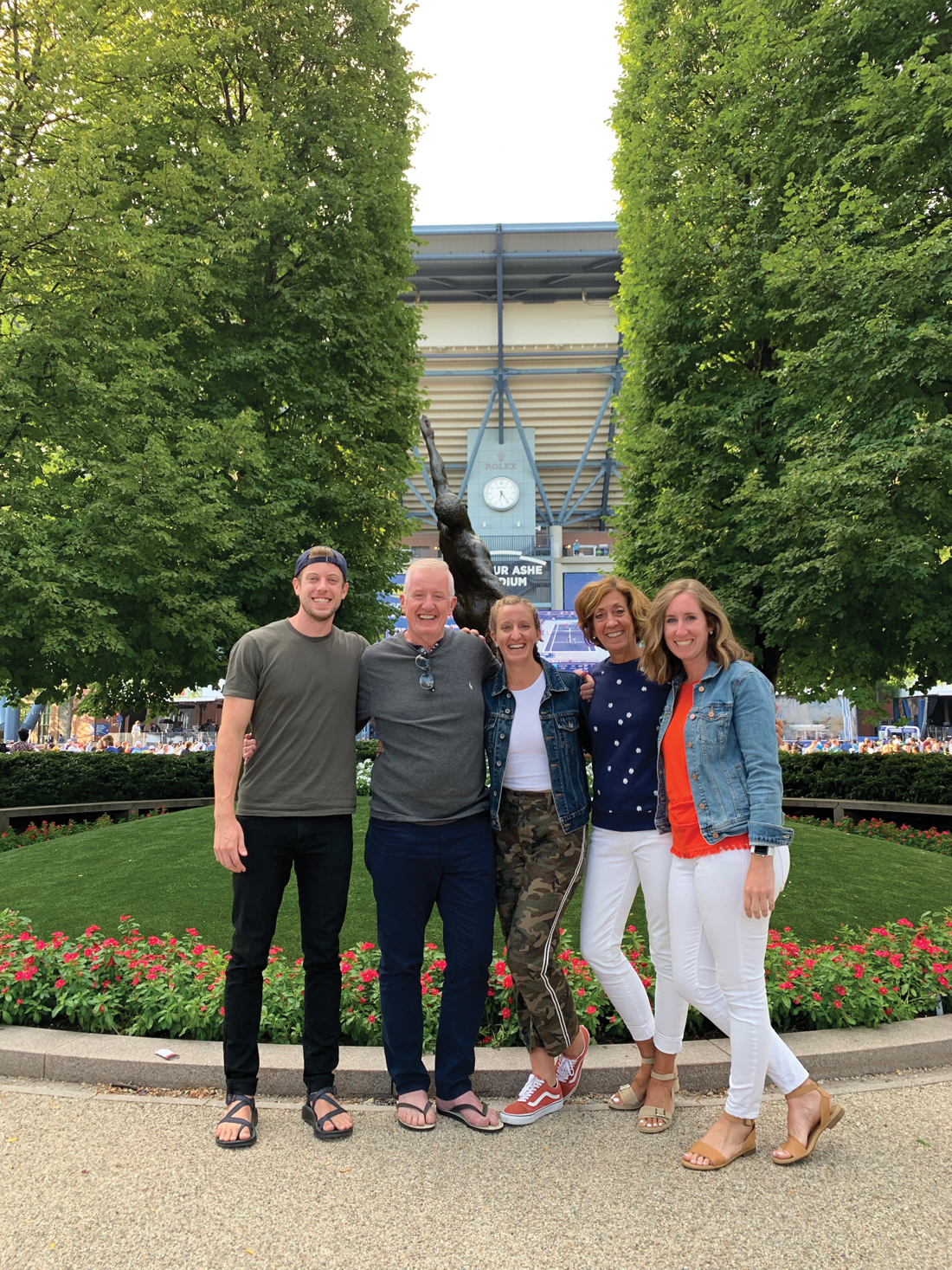 The Pipkins – Chase, Wilson, Hannah, Jennifer and Madison – at the U.S. Open in New York.

Born in Fort Worth, Texas, Wilson started playing tennis at the age of 5. “One day I grabbed a racket and just started hitting a ball against a wall,” he recalls. He ultimately developed a ritual whereby he didn’t allow himself to stop until he hit 100 balls in a row. Lessons followed and Wilson progressed to tournament play and became a member of his high school’s team. He was recruited to play at Navarro College in Corsicana, Texas, and then at Arkansas State University.

After spending two successful summers overseeing a tennis program at a country club in Peoria, Illinois, Washington Tennis Services then recruited Wilson for another assignment – the director of tennis at Four Seasons, which is now the Hempfield recCenter.

The move to Pennsylvania in 1985 proved to be life changing in another way. It was a “love” match for Wilson and Jennifer Shiner, who was a lifeguard at Four Seasons. Married in 1989, they are the parents of Madison, who like her mother is a teacher in Lancaster County; Hannah, who is a studio director for the Philly Art Center, as well as a fine artist; and Chase, who is a producer at Freethink Media in Washington, D.C. All three grew up playing tennis and continue to play through the United States Tennis Association (USTA). “Jennifer was the last holdout,” Wilson says of his wife becoming a tennis player.

Wilson shares that one of his greatest accomplishments in life came in 2019, when the Pipkins were named USTA’s National Family of the Year.

In 2008, Wilson was approached by the USTA about the possibility of Hempfield hosting a warm-up tournament for women ahead of the U.S. Open – the last of the four Grand Slam events – that is held in New York in late summer. (Hempfield is one of 20 facilities in Pennsylvania, New Jersey and Delaware that is deemed a USTA Premier Provider Facility.) With six indoor and 10 outdoor courts, as well as stadium seating for 1,200, Hempfield was more than qualified to host such a tournament.

The first several tournaments were held in May. The purse was $10,000. It was up to Wilson and his staff to line up sponsors. “I’ll never forget the first time I met with Randy and Betsy Wolgemuth,” Wilson says of the owners of Koser Jewelers. “I was a nervous wreck about asking them to be a sponsor. I think the amount we needed from them was something like $1,000.” To his surprise, they immediately said yes. “It’s been a great collaboration,” he continues. “You need something and Randy jumps right in. He personally selects the awards – pieces of jewelry – the winners receive. Jewelry eliminates having to haul a trophy around,” says Wilson, alluding to life on the road for players. “The girls love it.”

Several years ago, the prime date on the tournament calendar – mid-August – opened up. “The date was offered to us,” Wilson explains. “The purse increased to $60,000.”

This year, USTA is upping the ante. The tournament, which will be held August 9-15, will have a $100,000 purse, which will undoubtedly attract higher-ranking players. “This is a primo tournament,” Wilson says. “Admission is free. We welcome people to come and watch some great tennis.”

Wilson loves being involved in a sport he views as a lifetime endeavor. “I’m living it,” he says of continuing to play tennis. While Jimmy Connors and Chris Evert “rank” as his all-time favorite players, Wilson gained a new-found admiration for Rafael Nadal when he had the opportunity to work in the player registration area at the U.S. Open three years ago. “Nadal ended up registering at my desk,” Wilson recalls. “He was the only player to go around the room, shake everyone’s hand and tell us how much he enjoys coming to New York. I was impressed.”

He’s also become a fan and friend of Ons Jabeur, a player from Tunisia, who, as a teen, had to train on hotel tennis courts because of the scarcity of facilities in her homeland. She played in the Koser tournament three years ago and is now ranked 24th in the world. She is the first Arab woman to reach the quarterfinals of a Grand Slam tournament (Australia in 2020) and was named Arab Woman of the Year in Sports in 2019. “We talk about once a week,” he says.

Speaking of Grand Slam tournaments, Wilson put together a trip to Wimbledon a few years ago for 22 Hempfield members. “That was so much fun. I’d love to do it again,” he says. He also arranges annual bus trips to the U.S. Open for the qualifying rounds, as well as the main draw.

In His Own Words

I know I’m supposed to take the day off from work, but I love my job – It’s in my DNA – so I’d need to come to the office just to check in with everyone. If it’s Saturday, I’d then head for Central Market and grab some breakfast or lunch – Jenn helps out at the Central Market Juice Company on Saturdays. If it’s Wednesday, we’ll be joining some of our neighbors that evening for our weekly Wine Wednesday get-together that we’ve been doing for years.

No matter the day, I’d like to pick up on something fun that Jenn and I did during Covid –
we went on an ice cream tour of Lancaster County and hit eight or nine places. Everyone told us we had to go to Fox Meadows, which we did. It certainly lived up to the hype – in fact, I wouldn’t mind going back there. I know there’s more to discover, so I’m “game” to sample more ice cream.

On my perfect day, the kids would be home. When they were all home during Covid, we really got into playing board games – we got some massive Rook games going!

For dinner, we’d head for one of our favorite restaurants – Rice & Noodles or The Belvedere.

I’d end the day by watching television – undoubtedly, something on the Tennis Channel. Needless to say, tennis is on TV a lot at our house!

The Pipkins – Chase, Wilson, Hannah, Jennifer and Madison – at the U.S. Open in New York.