The John Wright Restaurant combines local farm-fresh ingredients, an unparalleled waterfront view and a bit of history to create a relaxing and memorable dining experience. 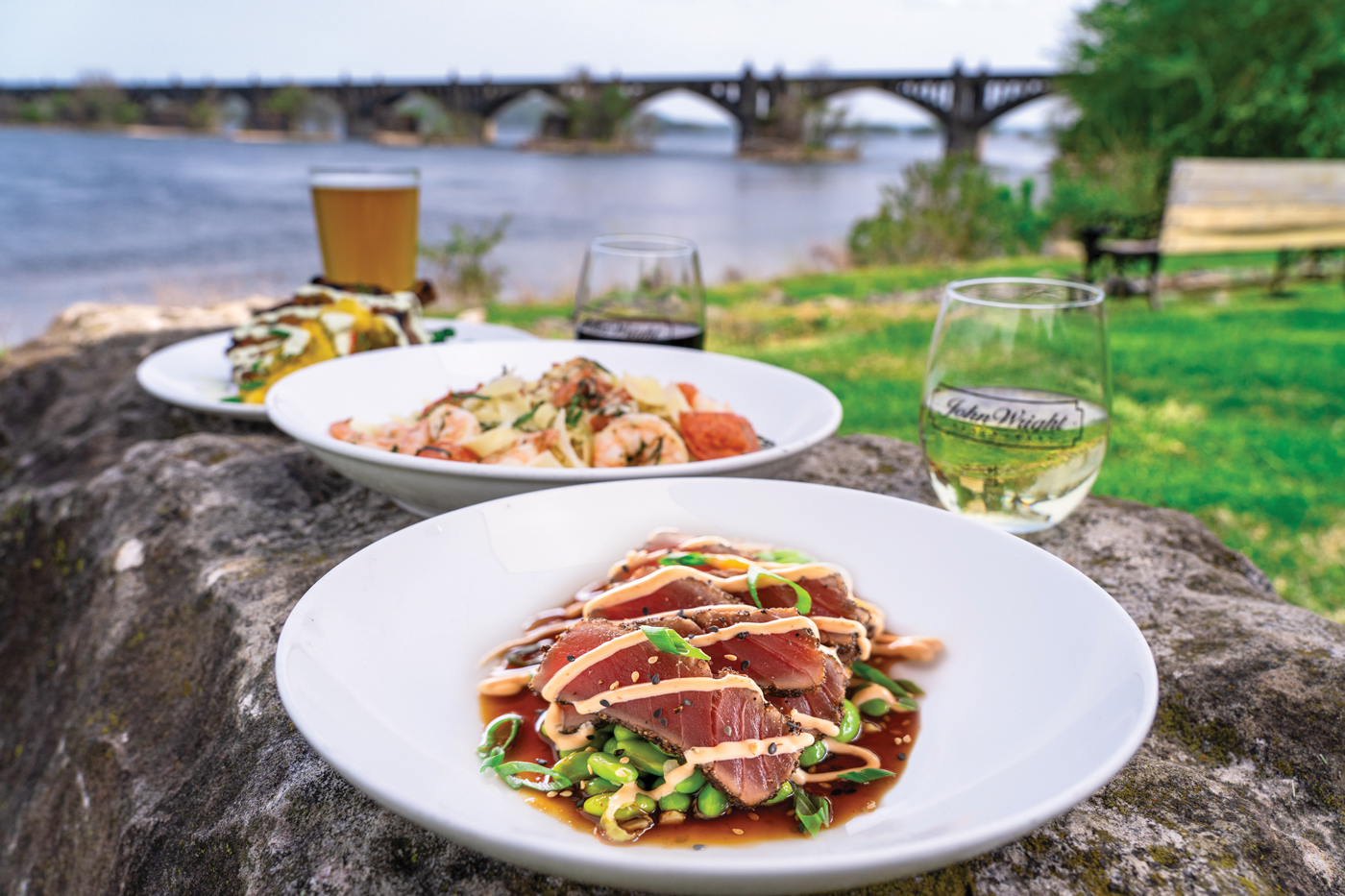 The restaurant makes its home in a 27,000-square-foot brick building that was constructed in 1916 as a warehouse for the Wilton foundry. It was used as a silk mill from 1932 until the early 1960s. In 1965, it was purchased by Donsco, which used it as a warehouse and manufacturing facility for its line of John Wright products. In 1974, a factory outlet store opened in the building.

The restaurant’s humble beginnings date back to 1988, when it was simply a sandwich shop – serving only breakfast and lunch – for patrons of the John Wright Factory Store. During the summer, a tent was erected to allow guests to enjoy outdoor dining with a river view. Word spread and the eatery became a popular destination for shoppers and locals alike because of its unique riverside setting. Since then, John Wright has become a multifaceted dining destination, offering indoor and outdoor dining, full-service bars and event space for weddings, etc. All areas of the restaurant take full advantage of the spectacular riverfront setting. 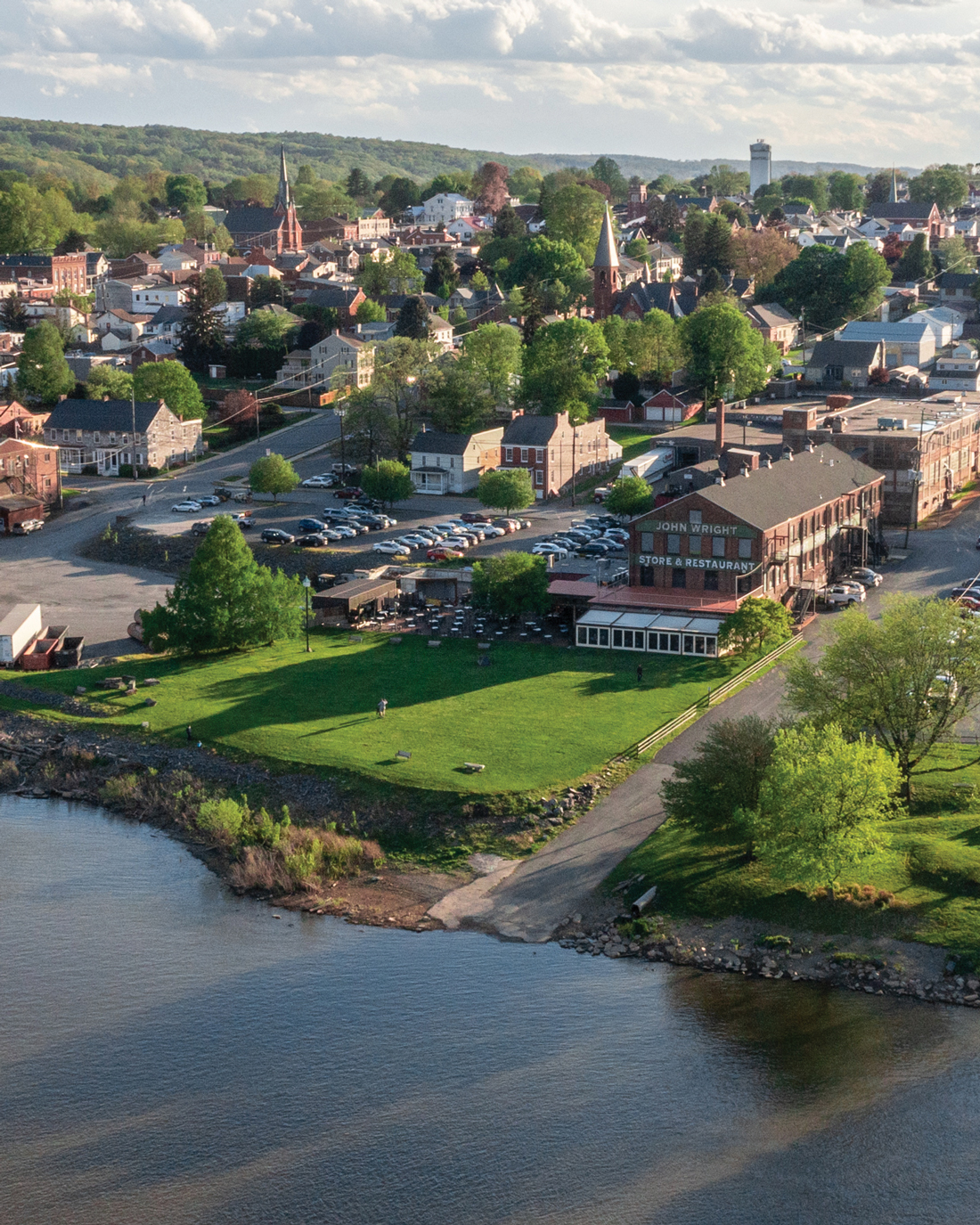 The décor celebrates local talent and craftsmanship. The restaurant’s barstools, dining tables and outdoor bars were built/repurposed by a local craftsman who used fallen trees from the area for the project. The wine cellar was crafted across the street at Donsco. A historical display behind the reception desk features mechanical toys and banks created by the John Wright Company.

Jim Switzenberg, the restaurant’s director of operations and executive chef, points out that John Wright is, in reality, two restaurants in one. While the indoor areas – including the spectacular Four Seasons Room that features timber construction and glass walls – focus on casual fine dining and farm-to-table, he notes that the warm weather brings “a whole different vibe,” thanks to the 400-seat Pizza Patio, which is open May-September, and its indoor/outdoor bars and wood-fired Italian pizza oven. 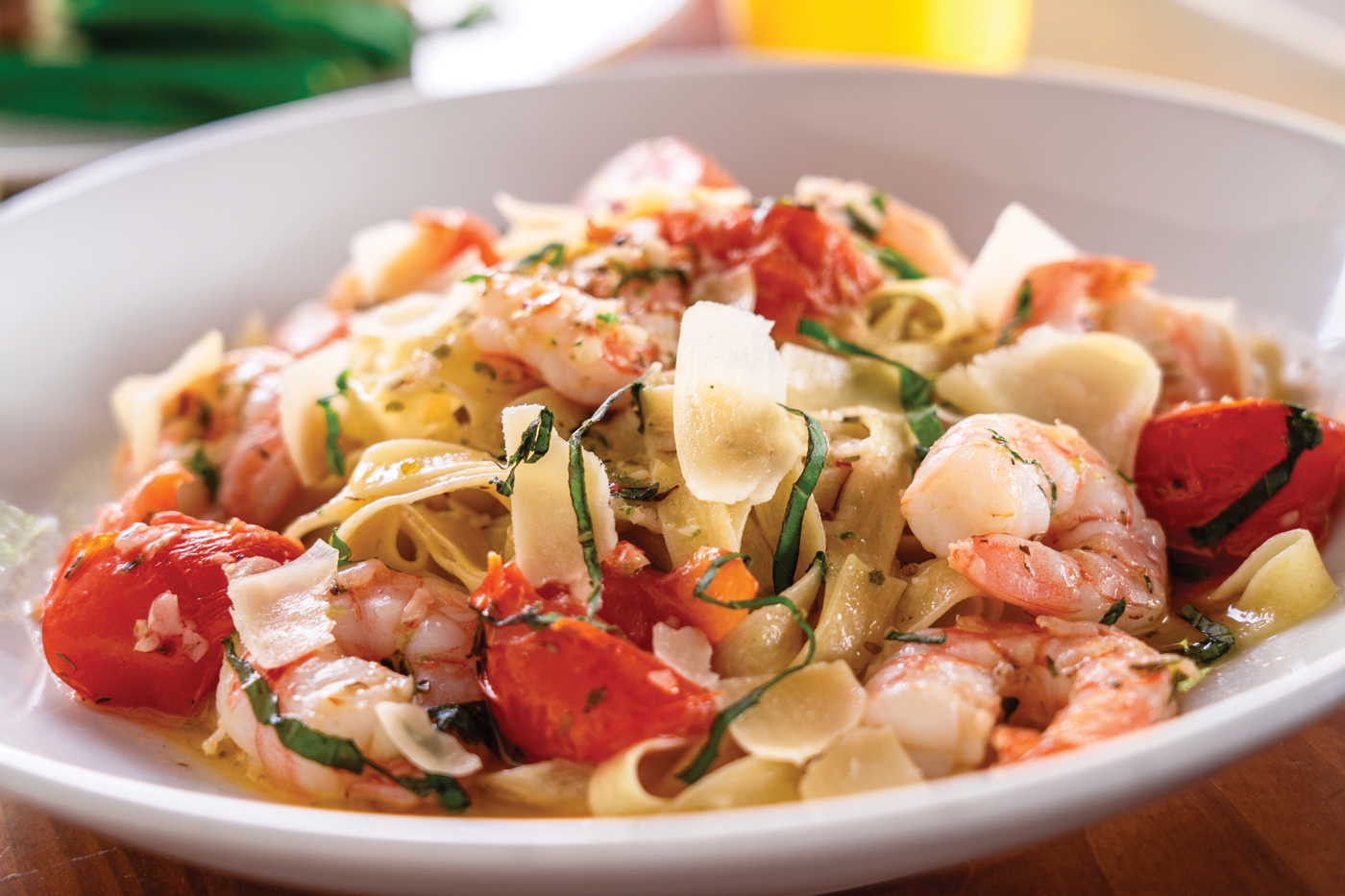 John Wright is also unique in that it offers a third entity – the 180-seat River Room, which boasts a separate entrance, exposed brick walls, beautiful wood floors, a bar and a spacious second-floor patio. The restaurant’s setting makes it a perfect destination for an outdoor ceremony by the water and a reception with a view in the River Room. 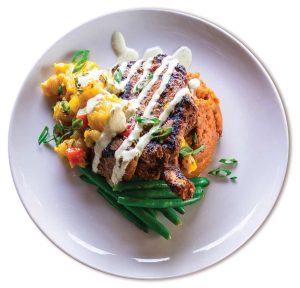 As for the menu, local is the key ingredient. “We are all about local and non-GMO products,” Jim shares. “We’ve gotten better over the past few years at eliminating GMOs from our ingredients. We work with local farmers to source produce, meat and dairy products.” Local ingredients include produce from Shady Acres Farm (Elizabethtown); produce and butter from Lehman’s Farm (Wrightsville); dairy products from Pine View Dairy (Lancaster); produce and herbs from Horn Farm Center (York); beef products from Locust Point Cattle Co. (Dover); cheese from Farm Fromage (Lancaster); and honey from Gingrich Apiaries (Dover). Flour is purchased from a mill in the region.

The kitchen staff’s talents extend beyond cooking. Beef for burgers is ground in-house, while sausage is made in-house, as is the sauerkraut. “We work with the farmer who raises the pigs,” Jim says. John Wright’s chefs also create desserts, ice cream and pizza dough in-house. The newest addition is a pasta machine, allowing all of the restaurant’s pasta to now be made from scratch in-house. “Over the past year, we’ve adapted and changed so we could continue to serve our customers but also keep our loyal staff working. When we purchased the pasta machine, we also pursued certification as a food manufacturer and we started an off-premises catering company,” Jim explains. 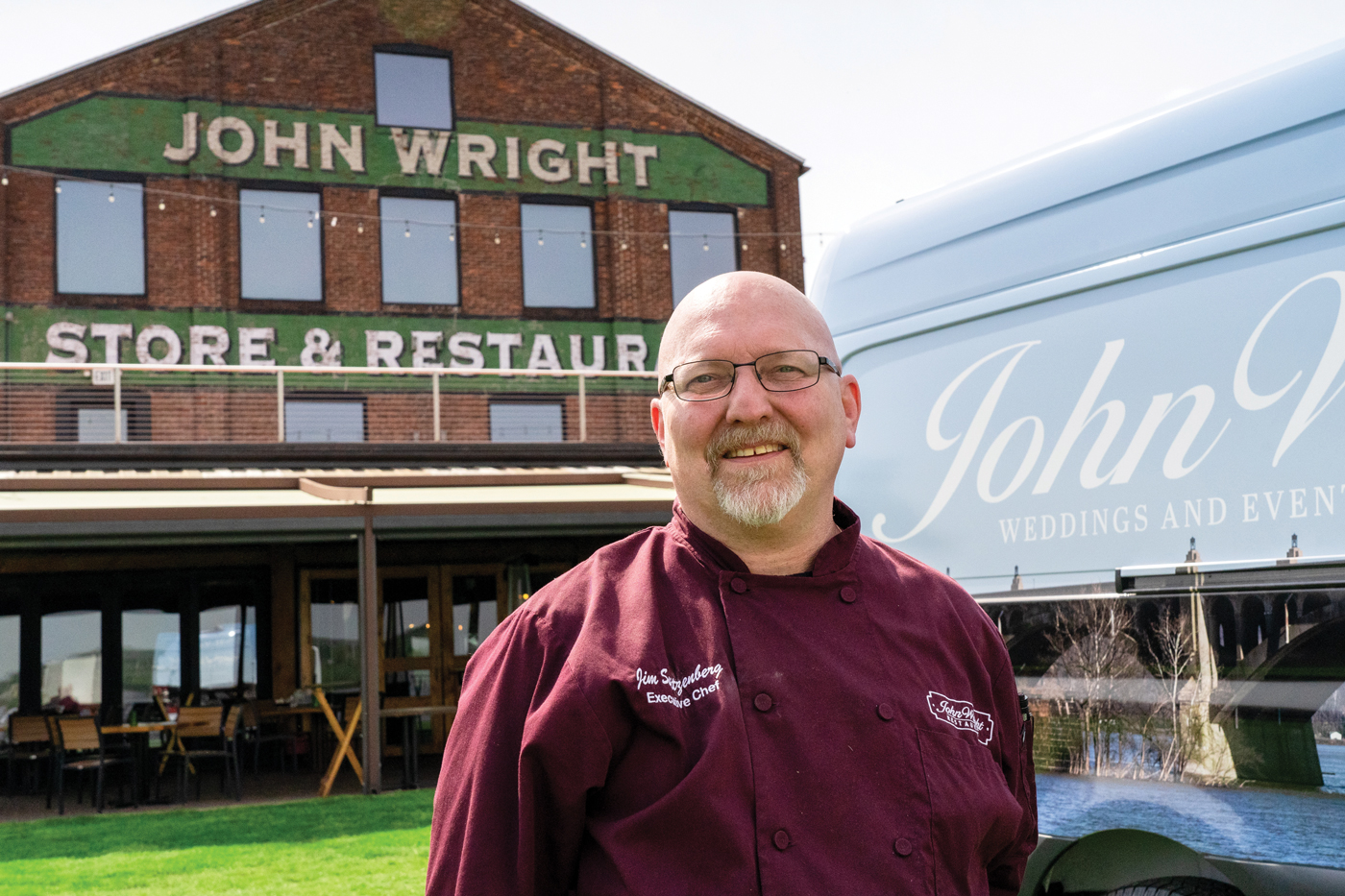 Jim Switzenberg, the restaurant’s director of operations and executive chef, is a graduate of the Culinary Institute of America. His career has taken him to New York, Los Angeles, Houston, Italy and Spain. He served as a senior instructor for HACC’s culinary program before joining John Wright in 2011.

A new service offered by the restaurant is Real Food Emporium, which launched in February. It was established as a way to bring fresh, local ingredients and to-go family meals to the area. Some of the items that can be found in the emporium are entrées such as shepherd’s pie and beef stroganoff, mac-and-cheese, house-made ice cream, cakes and signature desserts, as well as locally sourced milk, cheese, eggs and honey. John Wright is also partnering with El Serrano to offer their Finca de Torres wines. 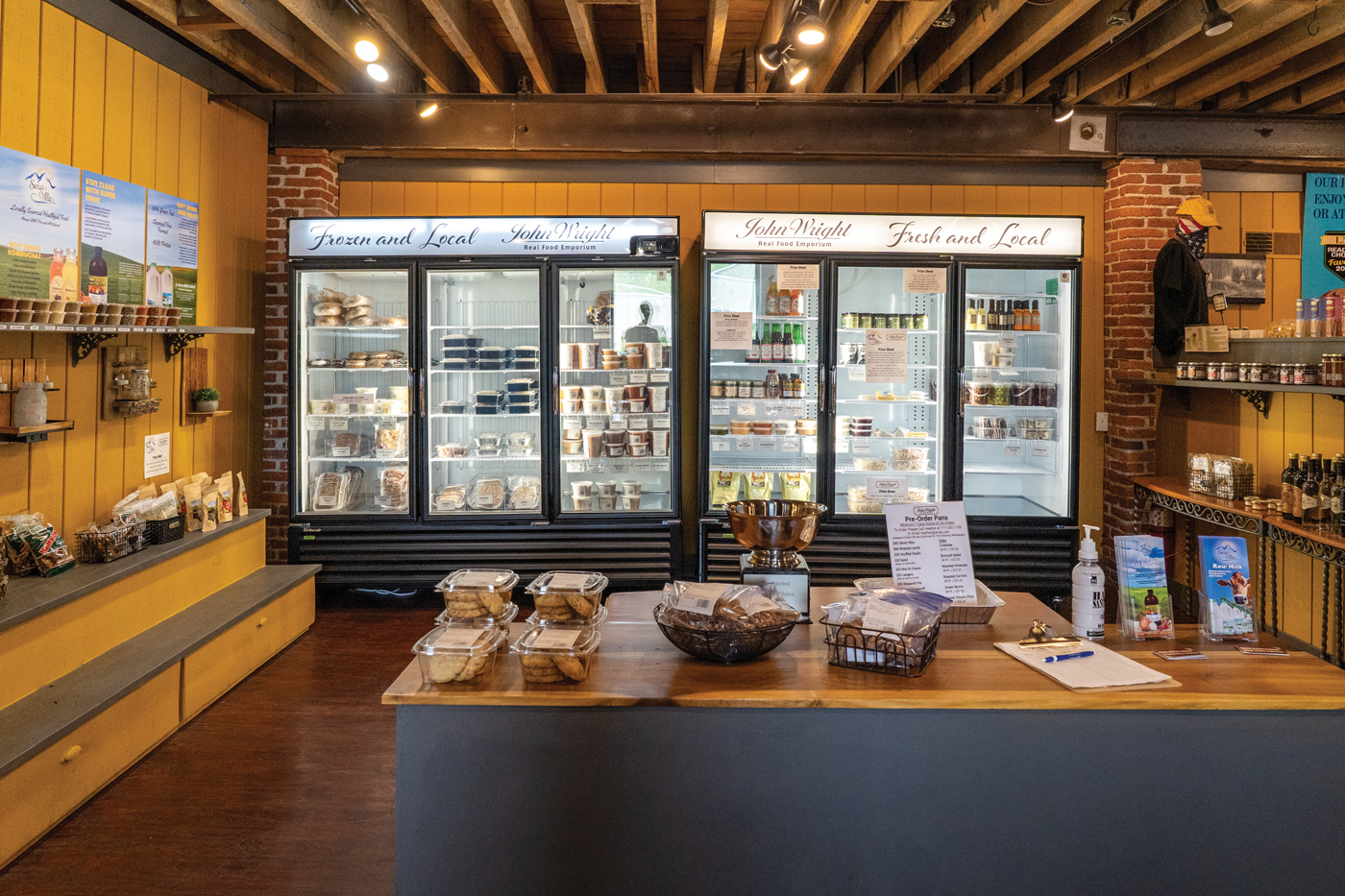 The Pizza Patio has its own menu that features salads, burgers, sandwiches, kabobs and an array of 10-inch wood-fired pizzas. (While some items on John Wright’s menu are offered gluten-free, pizza is not.) 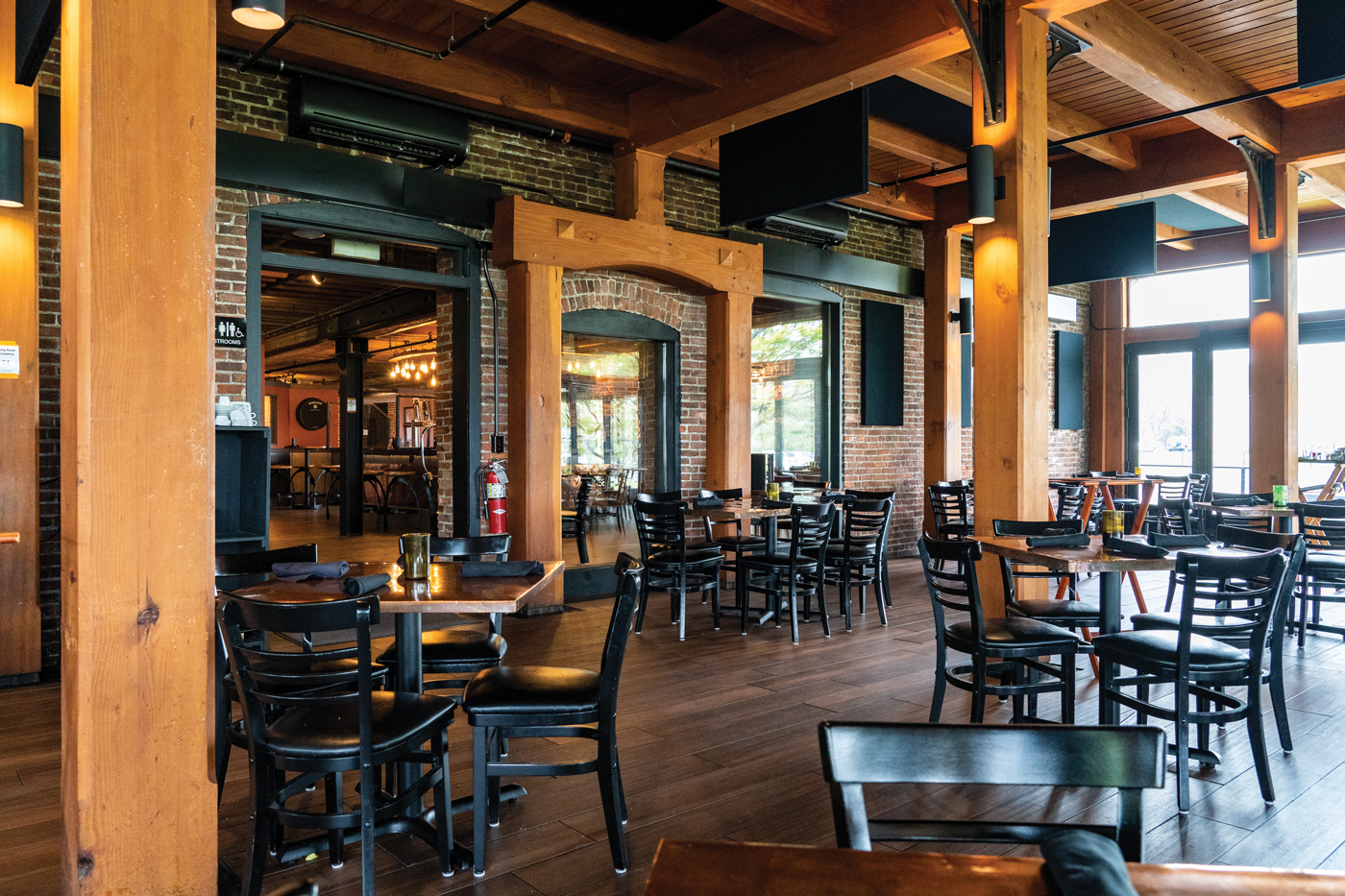 The bar selection focuses on local brews and spirits. The eight taps feature a rotating selection of Pennsylvania craft beer. Craft beer is also available in bottles and cans, and there’s also a selection of domestic and imported beer. Spirits are from local distillers including Thistle Finch Distillery (Lancaster) and Stoll & Wolfe Distillery (Lititz). Finca de Torres wine, as well as wine from Allegro Winery in Brogue, are included in the wine selections.

The restaurant also hosts a number of special events throughout the year including cigar dinners, Oktoberfest and benefits for the Hellam Township Police Department’s K-9 unit (the next one is May 27). “We try to be community friendly,” Jim says.

John Wright Restaurant is located at 234 N. Front St., Wrightsville. Reservations are recommended for both indoor and outdoor dining. Take-out is available. Call 717-252-0416 or visit jwrpa.com and on Facebook. Check online for current hours of operation.