Ten years ago, his 80th birthday party was cancelled – buried in Snowmageddon’s 20+ inches of snow. When Bob Groff hit the 90-year milestone this year, his family made certain that the redux would be a grand celebration of his many friendships gathered along the way. Fortunately, there wasn’t a flake of snow in sight! 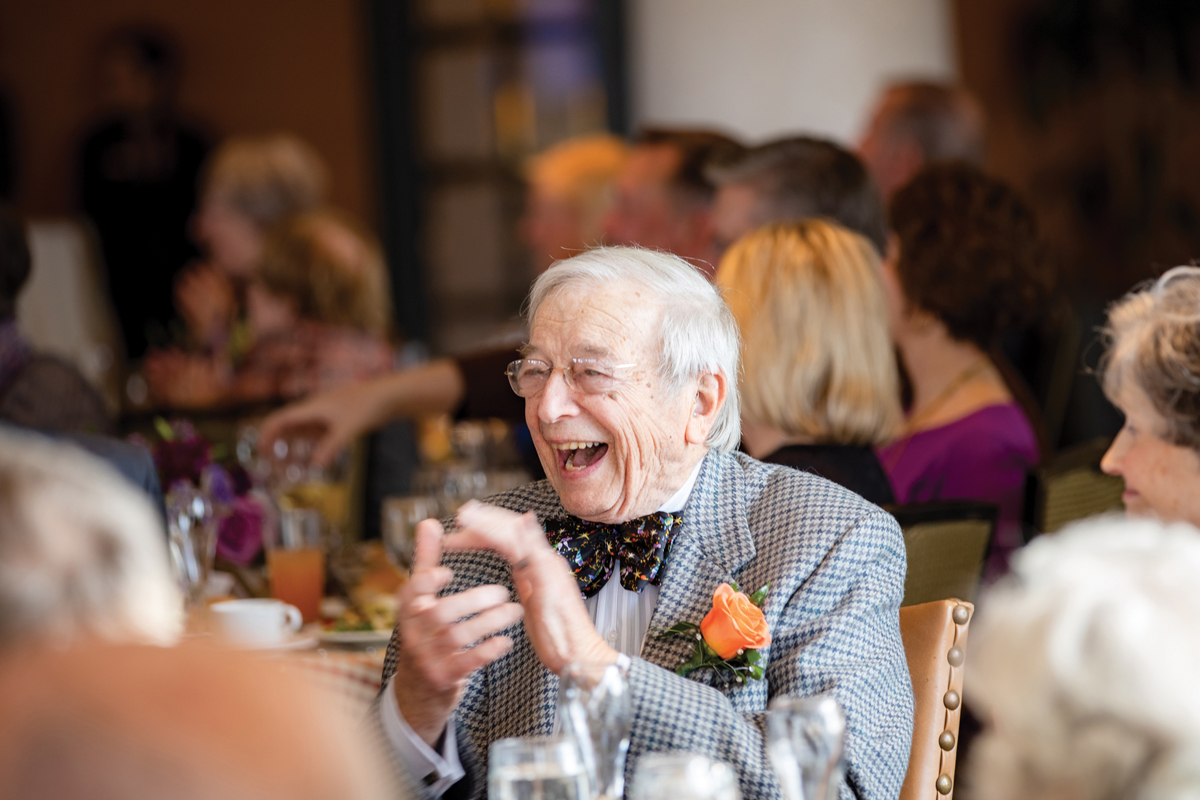 “Joyful” is an often-used adjective to describe Bob Groff. That may seem a bit contrary when one considers his profession as a third-generation mortician, leading Groff Funeral & Cremation Services for four decades before retiring in 2000. Yet, it may be the ever-present reminder of life’s brevity that has prompted Bob’s appreciation for cultivating a life full of profound relationships and rich with curiosity, learning and meaning.

It was only natural, then, that Bob’s 90th birthday celebration, which was held at the Lancaster Country Club, was epitomized by a room filled with 163 friends and family and a shared sense of joy among them that was as effervescent as the bubbles in the champagne.

“I wanted to make up for the past failure of the 2010 cancelled party for all the people I meant to entertain at that point in my life,” Bob says with a laugh.

It was worth waiting for.

Illustrator and artist, Mike Abel, created a bow-tie-inspired invitation for the party.

His encore party was billed as a “Jollification,” a term for festivity and merriment first used in the 19th century.

As emcee and Bob’s best friend Wally Otto good-naturedly reminded the crowd, “You’re lucky you made the cut; you are one of Bob’s 200 closest friends.” Lucky, indeed, as guests were treated to classical music performances by the New York Philharmonic’s violist, Peter Kenote, and William Wright, musical director at Lancaster’s St. James Episcopal Church. A seated multi-course dinner was peppered with eloquent anecdotes that revealed some of the deepest friendships, community contributions and family guidance that Bob has sculpted during his nine decades on the earth. 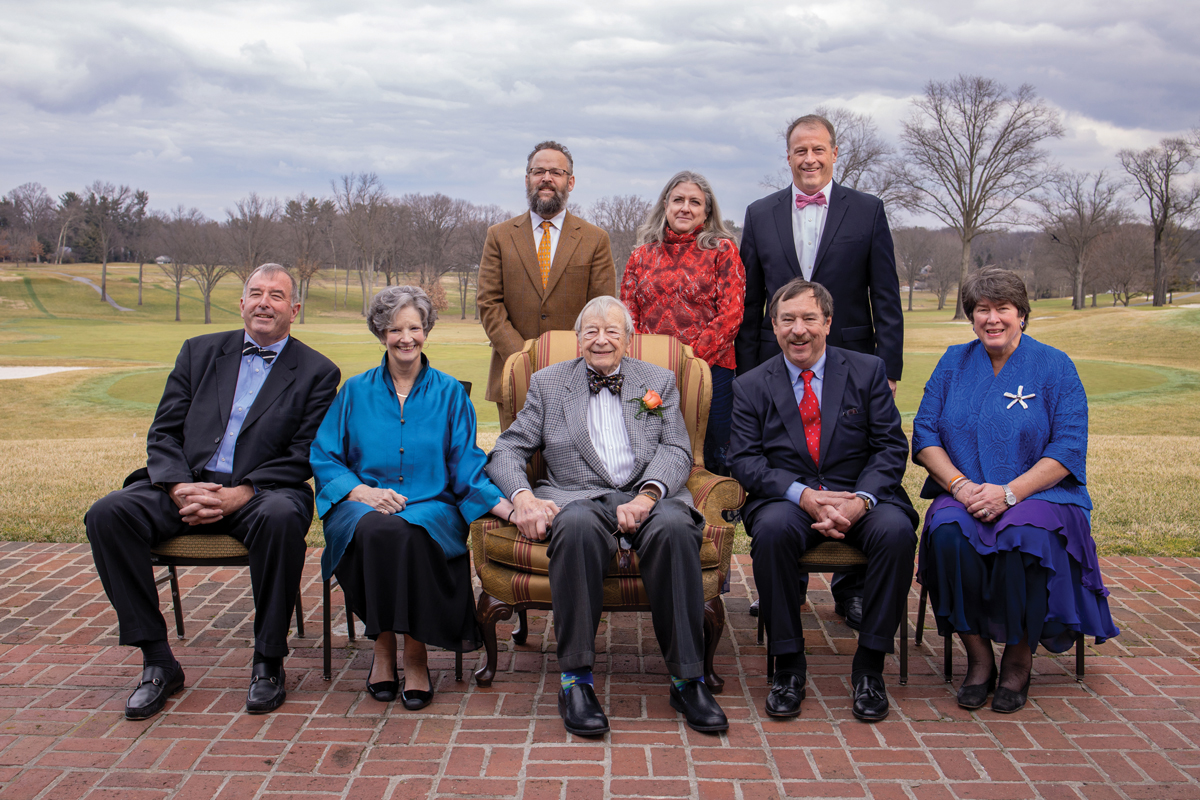 Tom Ryan, the president and CEO of LancasterHistory, credited Bob with refocusing his organization’s mission to include “fun” in every aspect of its work. “Because of Bob’s requirement that his experience of serving on our volunteer board be fun, he changed my perspective,” said Tom. “We now include the importance of having fun in our planning and initiatives for our members, donors, volunteers and staff.” 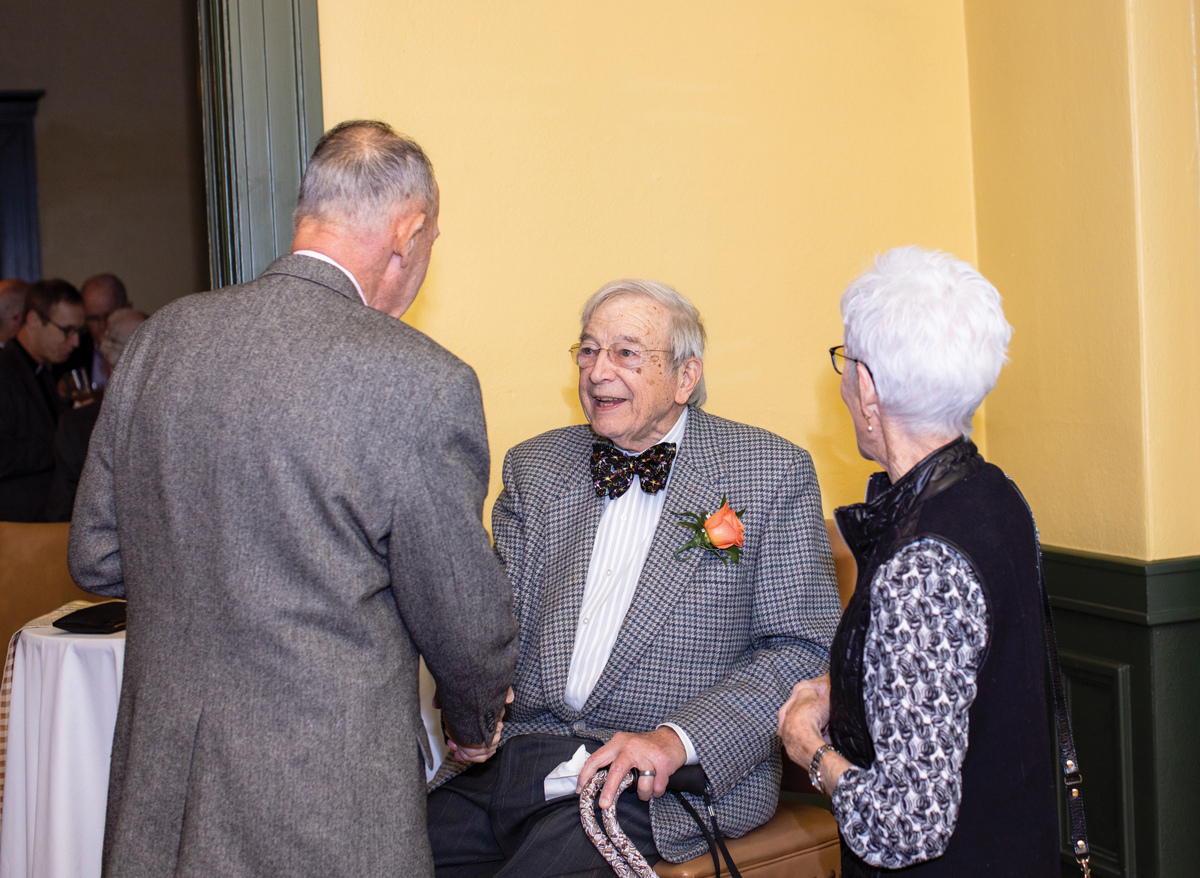 Bob’s desire for the personal touch was fulfilled by his greeting every guest individually during the cocktail hour.

Tim Watt joined the blended Groff family as a five-year-old, when Bob married his mother, the late Ellen Arnold Groff, who was a dynamic patron of Lancaster’s arts for many years. In a passionate tribute, Tim thanked his stepfather for teaching him “how to say ‘yes’ to life.”

Since many of Bob’s most rewarding moments in his daily life are spent in one-to-one conversations and very small discussion groups, it was important to his family that each table of eight was a carefully selected mix of guests that could foster meaningful relationships. Planning the seating of his guests was one of Bob’s most enjoyable tasks. “The reward for our family was hearing that he enjoyed his party, even though hosting a large crowd is not his daily cup of tea,” said his son, David Groff. 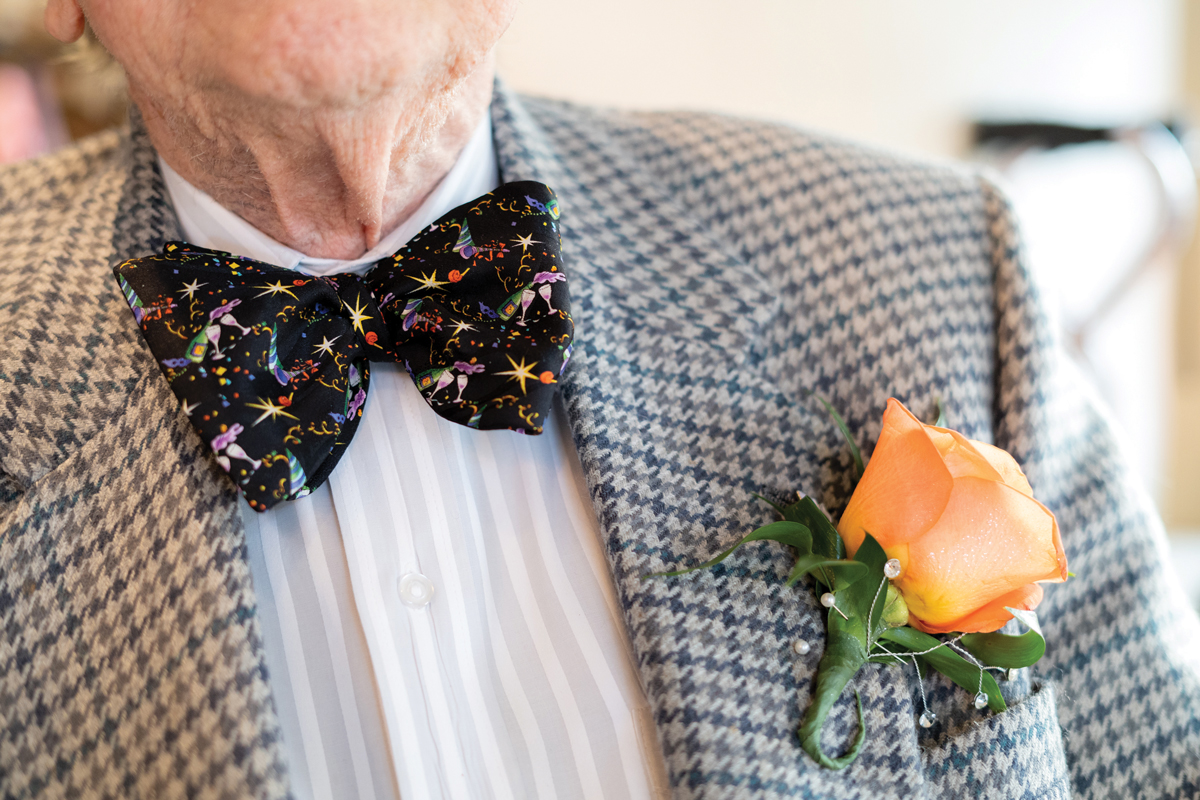 Bob dressed for the occasion, wearing a celebratory bow tie and a rose on his jacket’s lapel.

Ninety, according to Bob, is a fabulous age. He is using his next decade to focus on being fully present and realizing how much fun it is. “At 90, you don’t have too many reflections about the past, and you’re not worried about the future, so you can focus on the now,” he says. “I plan to make this decade especially interesting,” he promises.

In addition to working out for more than an hour three times a week –
treadmill, anaerobic training and stretching – Bob also participates in a philosophical discussion group and schedules numerous breakfasts and lunches with friends to strengthen his relationships with them. 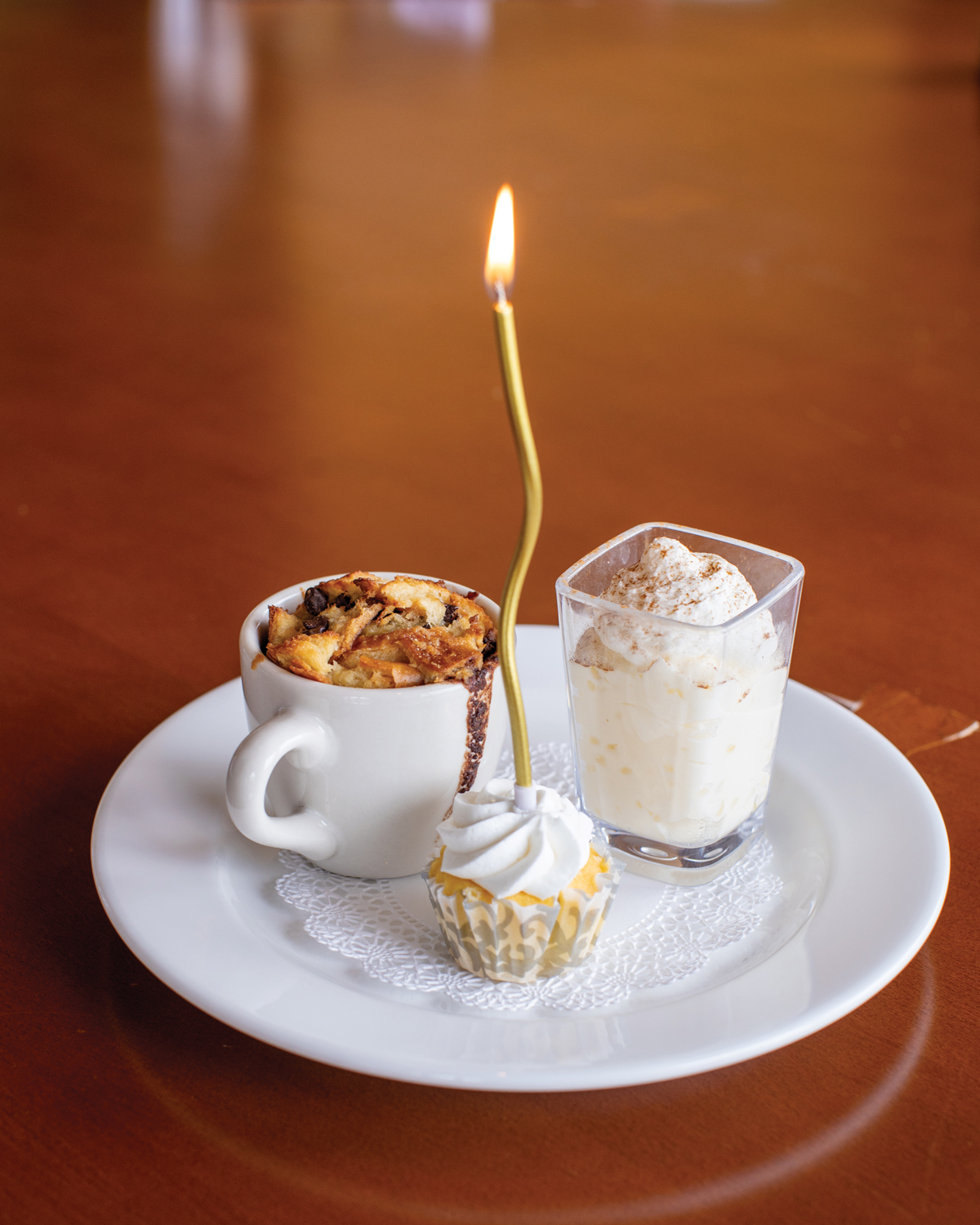 The dessert course included gold candles, which were simultaneously lighted to symbolize the spark Bob added to the lives of his guests.

“Every one of you is very special to me and has played different roles in my life over the years,” he said to his guests. “I have three thoughts to share: thank you for coming, thank you for being my friend, and I intend to increase and deepen our friendship over the coming years.”

Bob’s emcee followed up with a challenge to every guest: “Don’t rest on your laurels,” said Wally. “Be careful so you make the cut for the next decade’s party.” 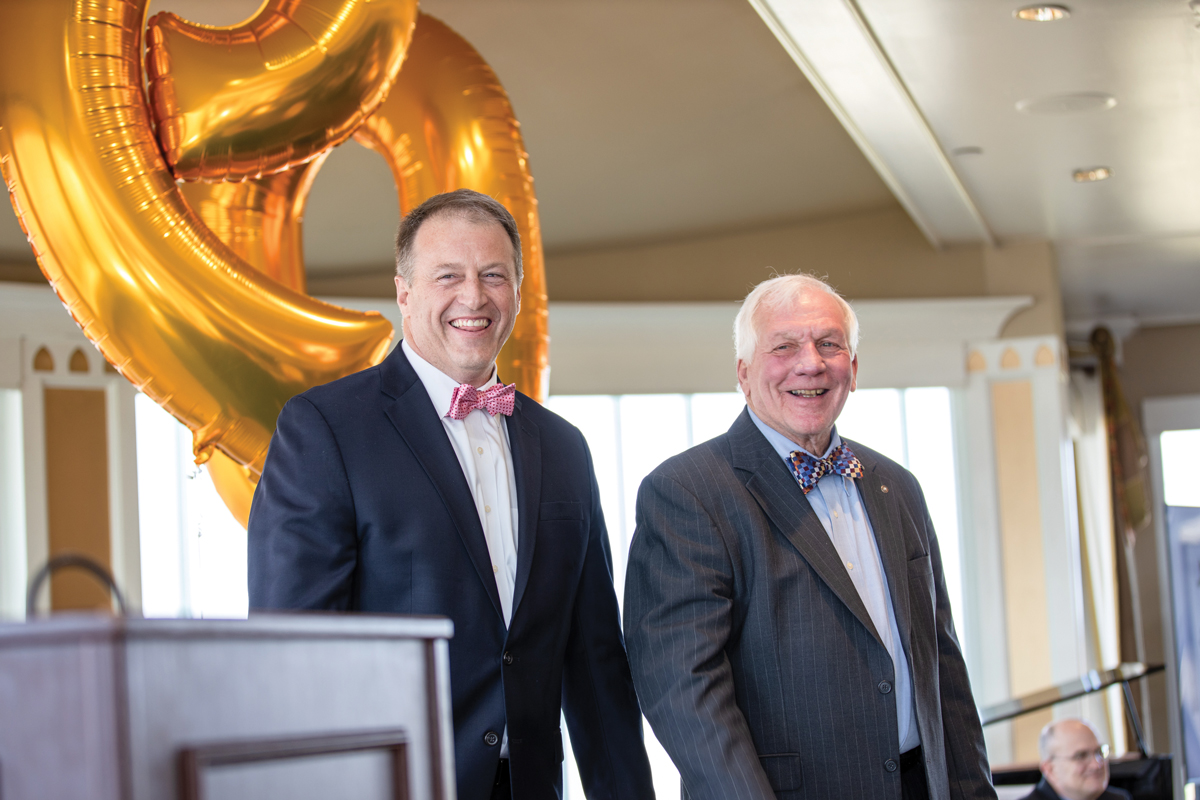 Along with a trio of desserts, guests received gold candles, which were to be simultaneously lighted. The small flames illuminated the room, a glowing symbol of the spark that Bob added to each of the lives present.

“It was like a kaleidoscope,” Bob says when describing his party. “You get a different design from every guest’s perspective. And, it was that bright and colorful.”

Bob dressed for the occasion, wearing a celebratory bow tie and a rose on his jacket’s lapel.