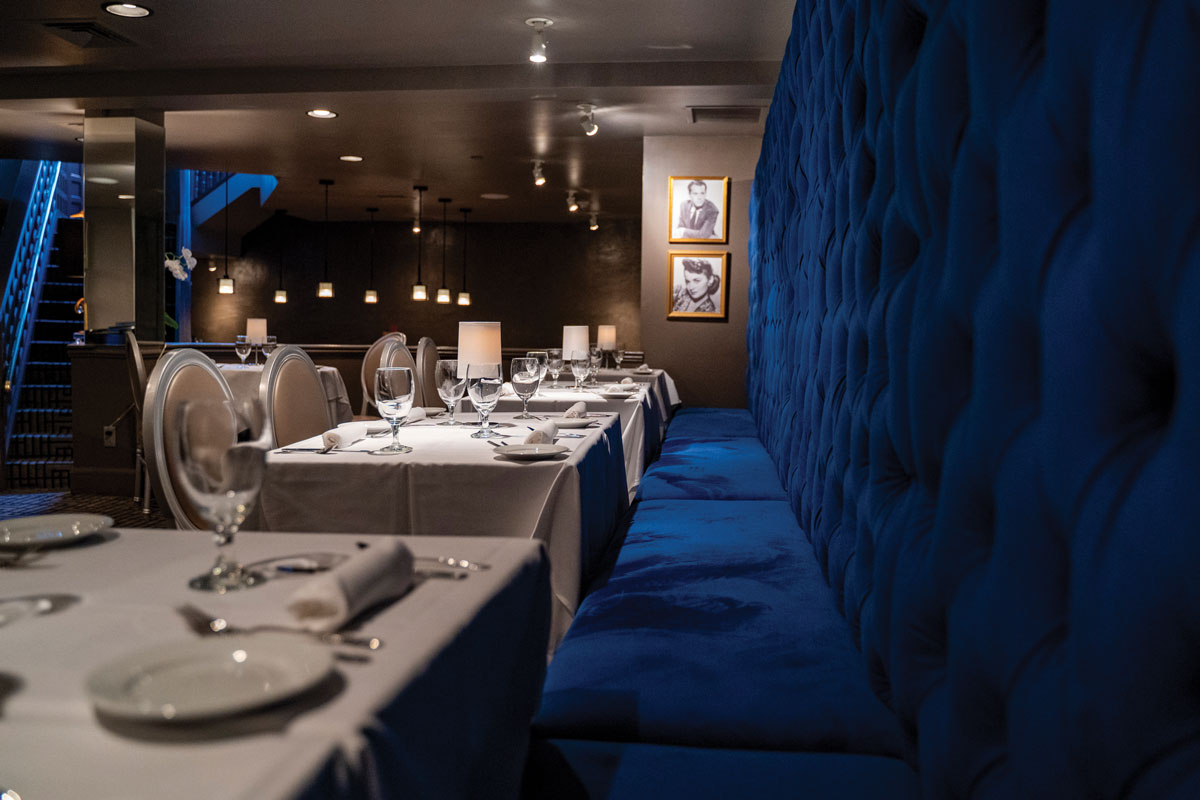 A dramatic color scheme and portraits of legendary Hollywood stars set the mood for dinner at Josephine’s Downtown.

Located in the heart of Lancaster, Josephine’s Downtown is owned by Dean Oberholtzer and Daniel LeBoon, who also serves as executive chef.

Dean, of course, is the owner of The Belvedere Inn, which has been a downtown favorite for more than 20 years. Daniel was the chef/owner of the popular Marietta restaurant, Josephine’s, which closed in 2011. The two began collaborating more than a year ago when Daniel became the executive chef at The Belvedere. With the closing of Carr’s Restaurant in the spring of 2019, they saw an opportunity to relaunch Josephine’s.

“It’s a refined Belvedere,” Dean says of Josephine’s Downtown, which opened in September. “We combine the touches that make The Belvedere a top restaurant with Josephine’s creative food and fine-dining experience.”

The passage of time hasn’t dulled Josephine’s reputation. “People still remember the great dining experiences they had at Josephine’s in Marietta,” Daniel notes. 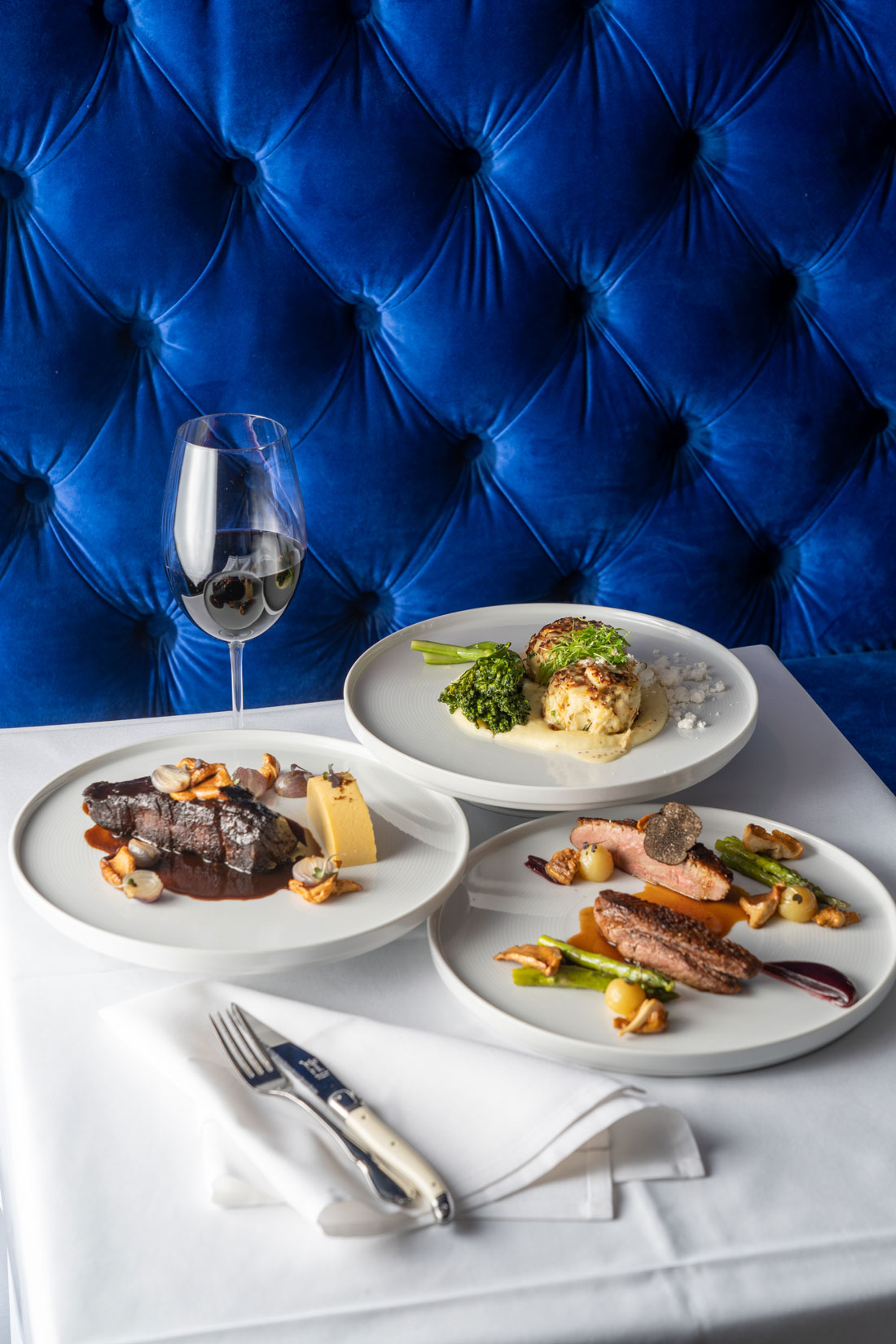 As guests make their way down the stairs to the 120-seat restaurant, they are greeted by an elegant chandelier, a projection of the restaurant’s logo (a stylized “J”) and a large portrait of Josephine Baker, the American-born singer and dancer who helped to define the Roaring 20s and was the inspiration for the design of the restaurant. Dean compares the restaurant’s atmosphere and décor to that of a “swanky supper club.” 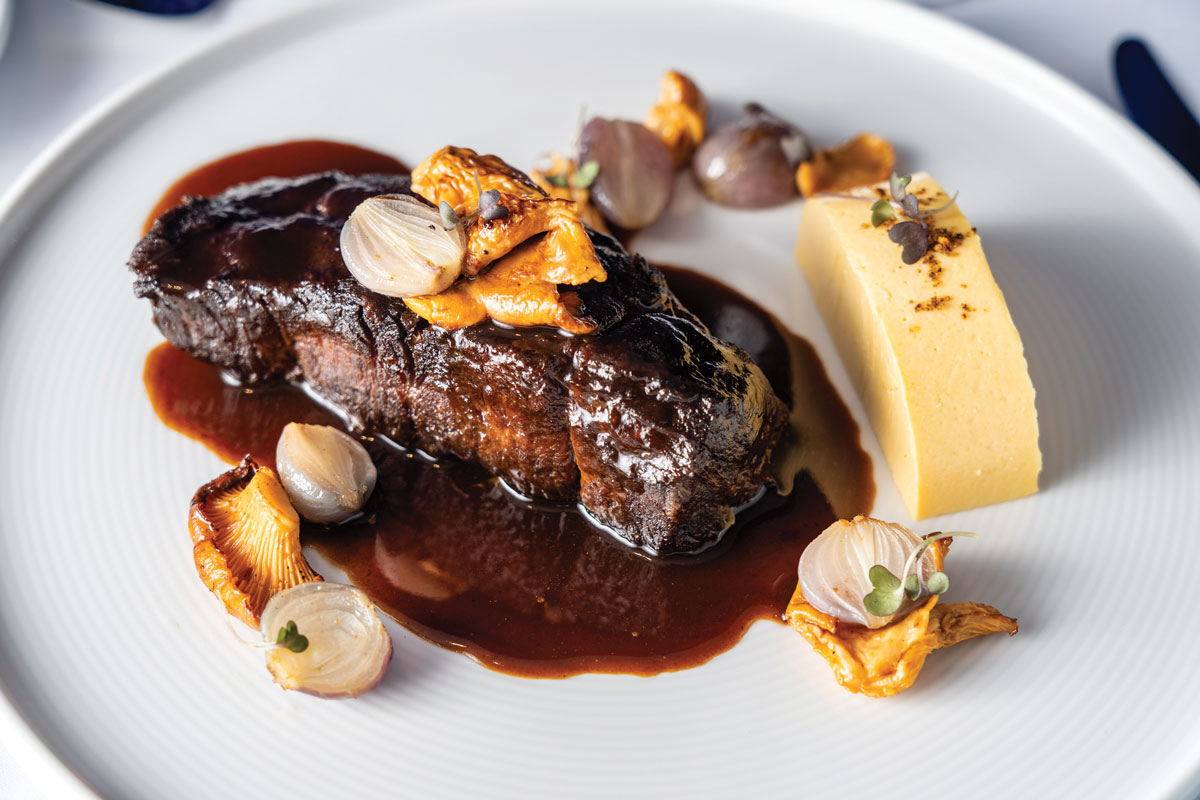 Black-and-white photos of Hollywood legends also adorn the walls. “We often see people looking at the pictures, trying to identify the stars. It’s not that easy – many of the photos are of the stars in their younger days,” Dean notes.

A bar area is tucked under the staircase. In addition to bar seating, a few tables are placed in front of a mirrored wall. A grand piano graces the adjoining dining area, which features tables and a floor-to-ceiling blue-velvet banquette. 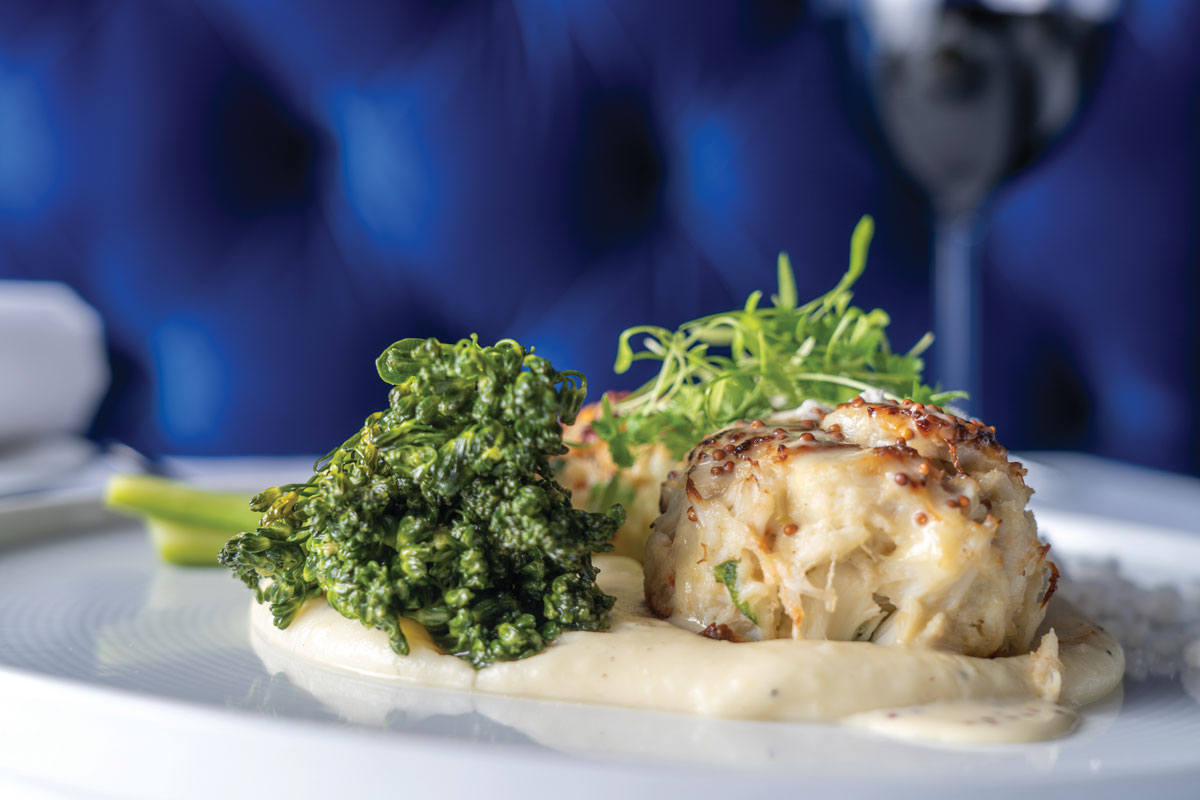 Josephine’s legendary crab cakes are also on the menu. They are accompanied by broccolini, brown butter powder and micro chervil.

Seating is also available in the glass-enclosed wine room. “Initially, the wine room was the most requested seating area because of its intimate feel. While that’s still popular, guests are now requesting the tables in the bar area – they can hear the piano music there,” Dean explains. There’s also a private dining room that can be reserved for special occasions such as birthday, engagement and anniversary parties. 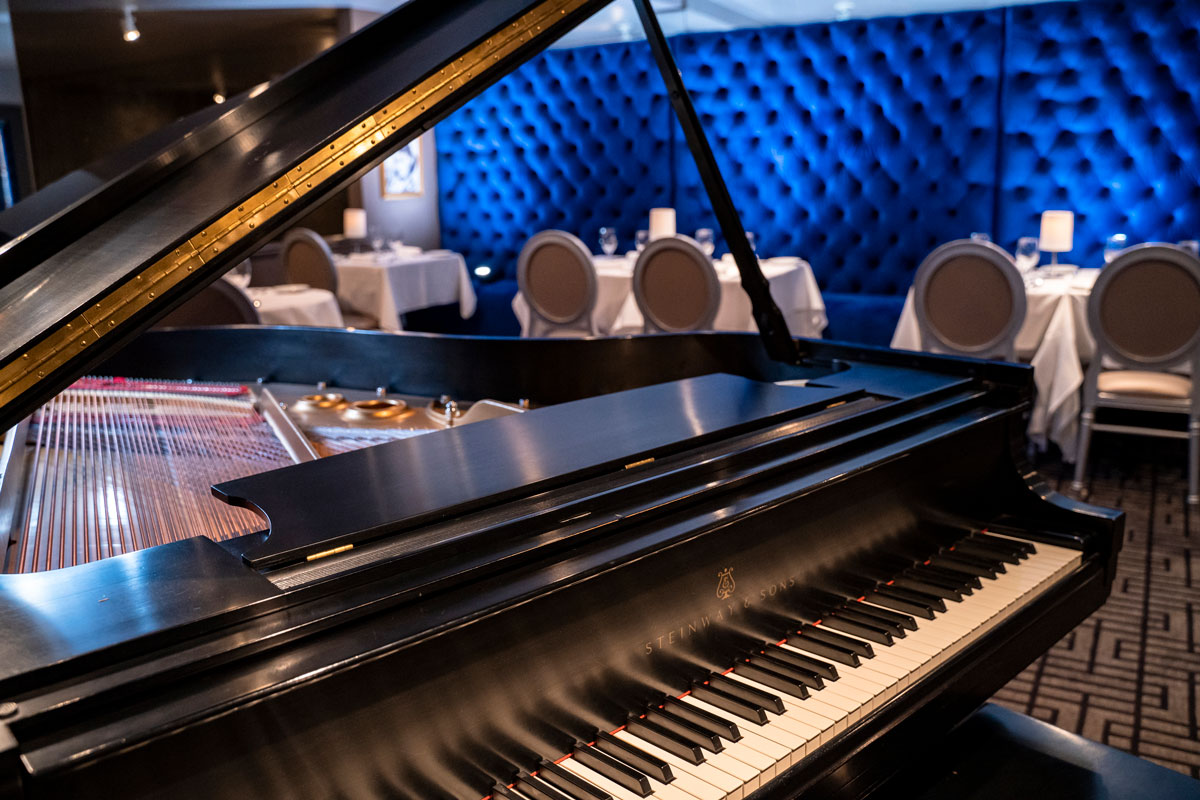 Live piano music is featured Thursday through Saturday and special holidays. Local musician Mark Huber is usually seated at the keyboard. “A lot of people have suggested we offer jazz music [because of the restaurant’s atmosphere], but the piano is the perfect touch. We like to have music, but we also want our guests to be able to enjoy their conversations,” Dean says. With several theaters nearby, Josephine’s has become a popular pre- or post-theater destination.

Daniel LeBoon traces his passion for food back to his childhood, when he began watching his father cook for the catering company he owned. Soon, he was helping his father. He officially launched his career at age 19, with his first stop being New York. He continued to learn and refine his craft as an intern at Philadelphia’s renowned Le Bec Fin. He worked in Paris at the Hotel Vernet under chefs Alain Solvere and Alain Ducasse. In 2004, he became the chef/owner of Josephine’s in Marietta. 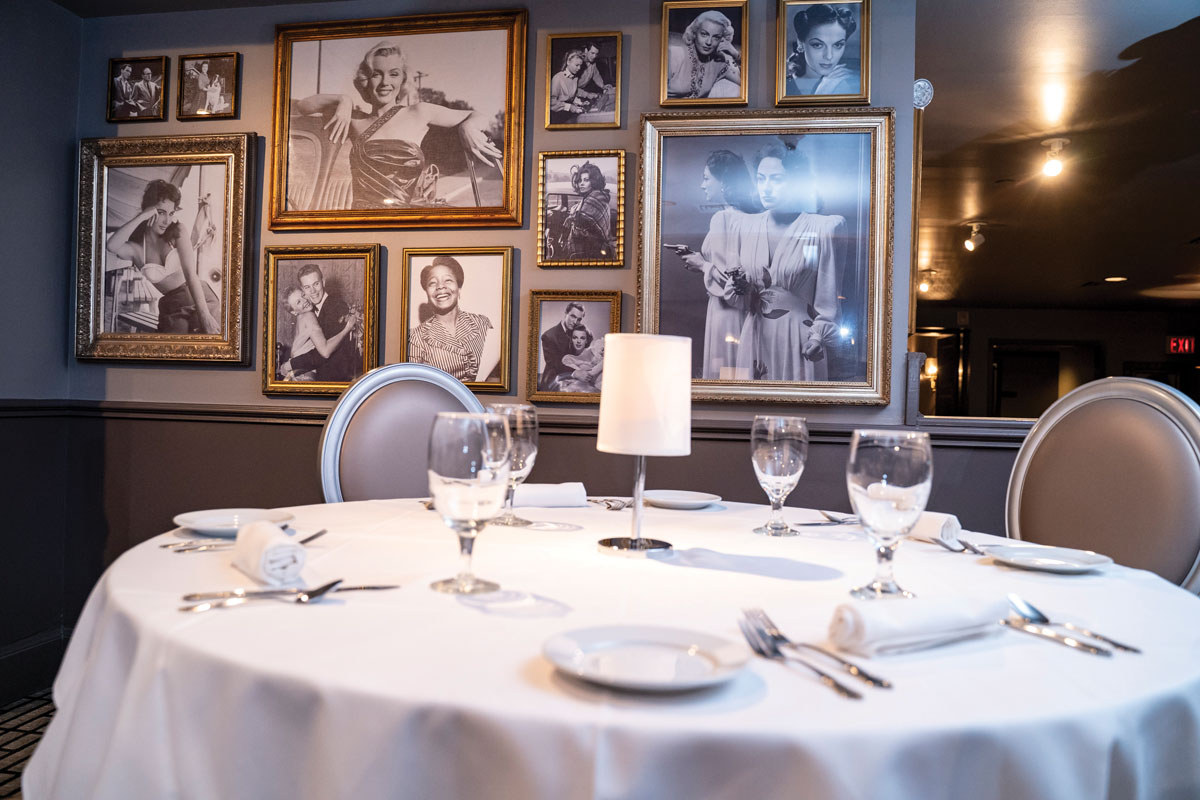 Photos of Hollywood legends decorate the walls, helping to create the ambiance of what owner Dean Oberholtzer calls a “swanky supper club.”

The restaurant’s newest menu was unveiled in January. “We refined the initial menu to include more of the classic dishes Josephine’s [Marietta] was known for,” he says, referring to signature items such as duck breast, mussels, shrimp Beurre monté and jumbo lump crab cakes. Gluten-free and vegetarian options are also available. Menu items are all made from scratch, using high-quality ingredients. Weekly specials augment menu items.

Daniel promises a special menu for Valentine’s Day – it may not be as extensive as the regular menu, but items will be prepared with the same attention to detail. Additionally, future plans call for Josephine’s to host wine dinners on a regular basis.

The bar menu includes several microbrews on tap, as well as signature cocktails named after Hollywood legends. Dean reports that the dining room manager researched stars such as Olivia de Havilland, Rock Hudson and Marilyn Monroe to find out what their favorite drinks were. The signature cocktail list was created using that information.

The two have also partnered to create a second restaurant in the former Carr’s space. A casual French bistro, C’est La Vie, opened in November.

Josephine’s Downtown is located at 50 West Grant Street, Lancaster. Hours are Tuesday-Thursday, 5-9:30 p.m., and Friday and Saturday, 5-10 p.m. Closed Sunday and Monday. For more information, call 717-299-7090 or visit josephinesdowntown.com and Facebook. Reservations are suggested and can be made by phone or online via a link on Josephine’s website or through Open Table.