When December approaches, hundreds of railroads – in almost every state in the country – dust off the cobwebs, blow the leaves off the tracks and welcome the tidings of the holiday season with themed rides and excursions. Pennsylvania offers “the most prolific collection of railroad attractions throughout the country” cites the train enthusiast entity American-Rails.com. Fortunately, Lancaster and neighboring counties have many options that have not been derailed this holiday season.

Trains became synonymous with Christmas during the Golden Age of railroading – late 1800s to post-WWI – when rail-riding families traveled home for the holidays. But, alas, the industry declined and railroads as a primary means of transportation were replaced by highways and skyways.

The model train under the Christmas tree became a popular reminder of Christmas past, as have movies that excite the imaginative connection between the holiday spirit and the train. In Lancaster, we’re also fortunate to have The Choo Choo Barn, The National Toy Train Museum and the Railroad Museum of Pennsylvania, which celebrate trains both large and small. 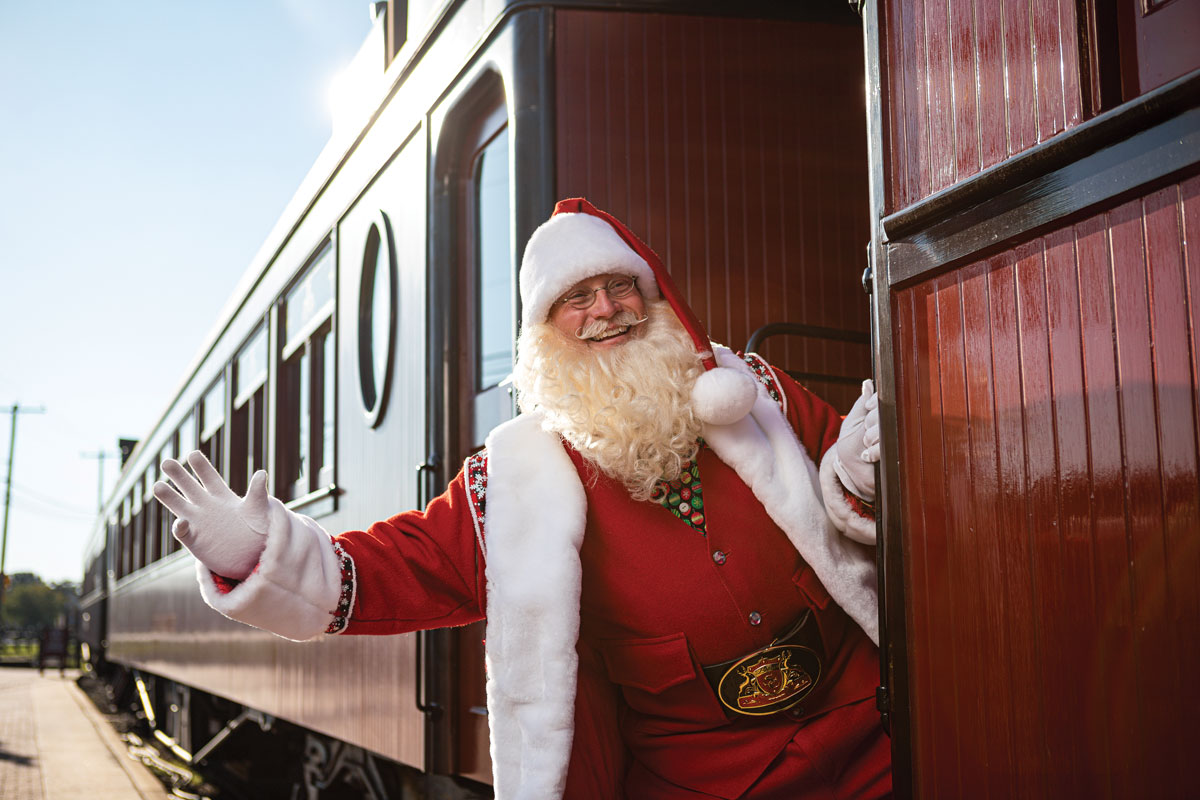 Riding the Rails with Santa in Strasburg

The nostalgia lives on through the themed events that are held at the Strasburg Rail Road, which is regarded as America’s oldest operating railroad. “Celebrating the magic of Christmas has been a tradition for more than 60 years at Strasburg Rail Road,” says Tony Gebbia, president of the popular attraction for both tourists and locals. “The tradition continues this year with added safety measures, including Santa wearing a mask, too, social distancing and enhanced cleaning protocols aboard the trains and on our property.”

Beyond a masked Santa, the departure schedule is modified to allow for a designated cleaning and sanitizing time between trips. The capacity of each train car has been reduced by 50%, meaning no more than 34 people will be on any given car. Carolers and musicians, who normally stroll about the cars, are instead singing and performing outside in the mall area near the station. Safety is at the forefront of operations this year, Tony explains. His mission is to allow guests to enjoy four unique experiences in the safest way possible.

Santa’s Paradise Express, which runs through December 24, sees Santa Claus – who afterwards must get back to work at the North Pole – welcome passengers of all ages for a “truly magical steam train and Christmas experience.” The jolly old soul greets families onboard the 45-minute ride through the countryside and back and presents children ages 11 and under with special gifts.

Santa’s Christmas Trolley (through December 23) is a bit more exclusive, as passengers young and old board the historic LO&S Motorcar for a visit with Old St. Nick; built in 1915, this Lancaster, Oxford & Southern railcar is one-of-a-kind. For this ride, children are able to meet with Santa individually during a 45-minute ride to Paradise and back.

The Night Before Christmas Train (through December 22) recreates the excitement and anticipation of Christmas Eve. A performer in Victorian garb reads aloud the classic Clement Clarke Moore poem as the train rolls down the tracks. Passengers are treated to milk and cookies (because those snacks should not only be for Santa).

If you haven’t already been aboard or made reservations for the Christmas Tree Train – described as Strasburg’s “Currier and Ives Christmas experience” – as it rambles to Leaman Place Grove and back toting pre-cut Fraser fir trees, then you probably need to plan ahead to next November. It ends December 4-5.

A Victorian Christmas in Jim Thorpe 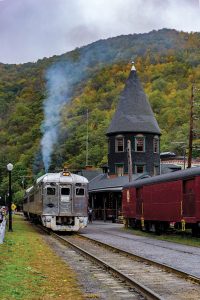 The Reading Blue Mountain & Northern Railroad resumed its scenic trips between Reading and Jim Thorpe in time for viewing fall color and plans to continue them through the holiday season. Photo by Seth Dochter.

Speaking of trees, this fall the Reading Blue Mountain & Northern Railroad (RBM&NR) restarted scenic trips to Jim Thorpe via Rail Diesel Cars. The trips allow shoppers and sightseers three hours at the popular destination before making the return trip to Reading Outer Station. (While the town’s annual Olde Time Christmas Weekends festival has been canceled for 2020, homes/buildings will be decorated and shops will be open.)

The Jim Thorpe expeditions receive high praise from travelers, which is a good thing for a conductor hoping to stay on Santa’s “nice” list. Santa usually visits a handful of communities along the Reading & Northern line by means of a steam locomotive. The Santa Claus Specials are usually sold out in advance – even before social distanced seating became the norm on all railroads.

Something to think about for spring: from Jim Thorpe, the RBM&NR runs a special Lehigh Gorge Train through Lehigh Gorge State Park. The 16-mile (round-trip), narrated excursion winds along the Lehigh River, rounding curve after curve until reaching Old Penn Haven. The Lehigh Gorge line runs an open-air car, a circa-1932 standard coach, a gondola car and a 6-person caboose – that’s where I want to ride!

Hot Chocolate With Santa and an Elf in Kutztown 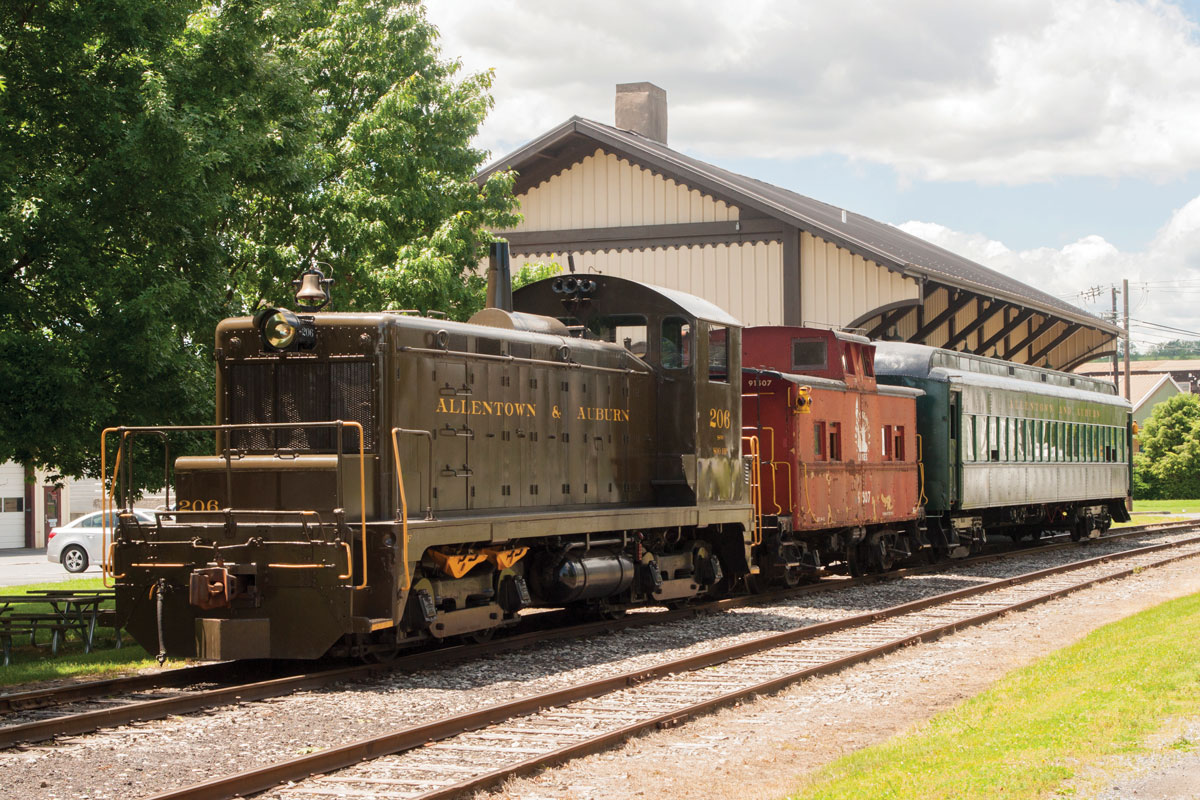 The Allentown & Auburn Railroad, departing from Kutztown, will once again be running its Hot Chocolate with Santa trains every weekend until Christmas. This year, the sought-after tickets will be a bit harder to come by as seating capacity has been reduced to keep in line with COVID-19 sanitation and social-distancing standards. All railroad personnel wear face masks and each car is sanitized between runs.

The Elf Express will return on Saturday, December 5, in conjunction with Christmas in Kutztown activities. This one-day-only event is inspired by the popular The Elf on a Shelf and is a short run to Topton and back. The ride lasts about an hour aboard the Pennsylvania Doodlebug. (A Doodlebug is a self-propelled railcar used on smaller passenger-volume lines in the early 1900s.)

“We are trying to keep some kind of magic,” said railroad president Mike Bast before the first Elf Express run in 2019. “This is something new and different for us. Kind of like The Elf on the Shelf, except this is elf on a train.”

A Pajama Party in Boyertown

Holiday events sell out quickly, says Director of Marketing Frank Buttaro, who has seen their popularity grow every year. This year, the holiday excursions have been reimagined “to be both virus-conscious and kid-approved.” Santa will be perched on an open-air car where children can visit and hand him their Christmas lists.

“We encourage families to come to the ’Twas the Night Before Christmas train in their pajamas, and frequently they do,” says Frank. The big kids will marvel at the trains themselves. Colebrookdale runs luxurious cars “restored to the golden age of railroading.”