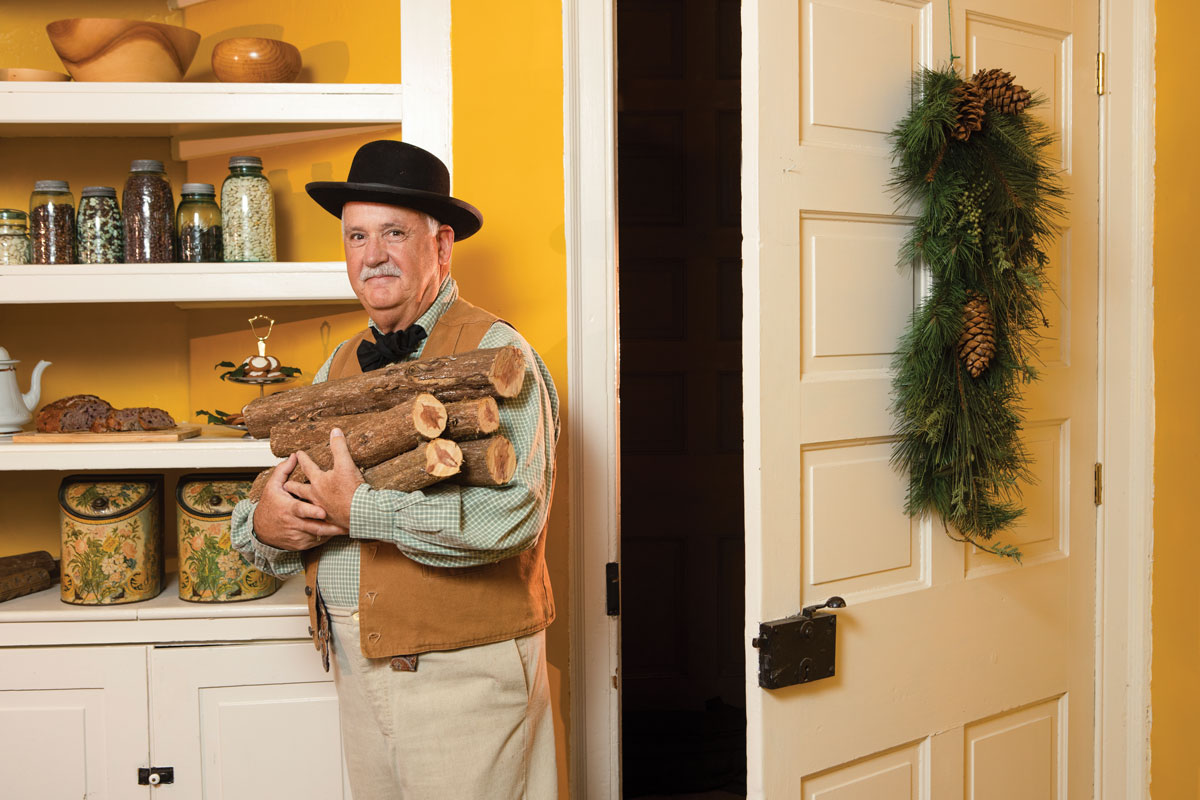 Like many localities along the East Coast of the United States, Lancaster is not without its share of historic properties that serve to connect our past with our present. Many celebrate the holidays with simple events or in grand style. In Lancaster, history buffs can travel back in time and celebrate the holidays at such properties as Historic Poole Forge, Rock Ford Plantation and Wheatland.

“Our Pennsylvania German heritage brought over a number of different traditions at Christmas time, everything from upside-down Christmas trees to the very fun and mischievous tradition of the Belsnickel –
he’s the one who puts the coal in your stocking instead of presents,” explains Joel Cliff of Discover Lancaster, when talking about the myriad of holiday traditions to be found in Lancaster County. “The first written mention of a Christmas tree in American history is in the 1821 diary entry of Matthew Zahm, who lived in Lancaster.”

The National Christmas Tree Association credits German settlers with introducing the Christmas tree to the United States in the 1800s, with Pennsylvania being credited with the first “display” Christmas tree in 1830. Today, the holiday traditions of the early German, English, Welsh, Irish, French Huguenot and Scots-Irish immigrants are kept alive by foundations and organizations that maintain some of the county’s most historic sites. 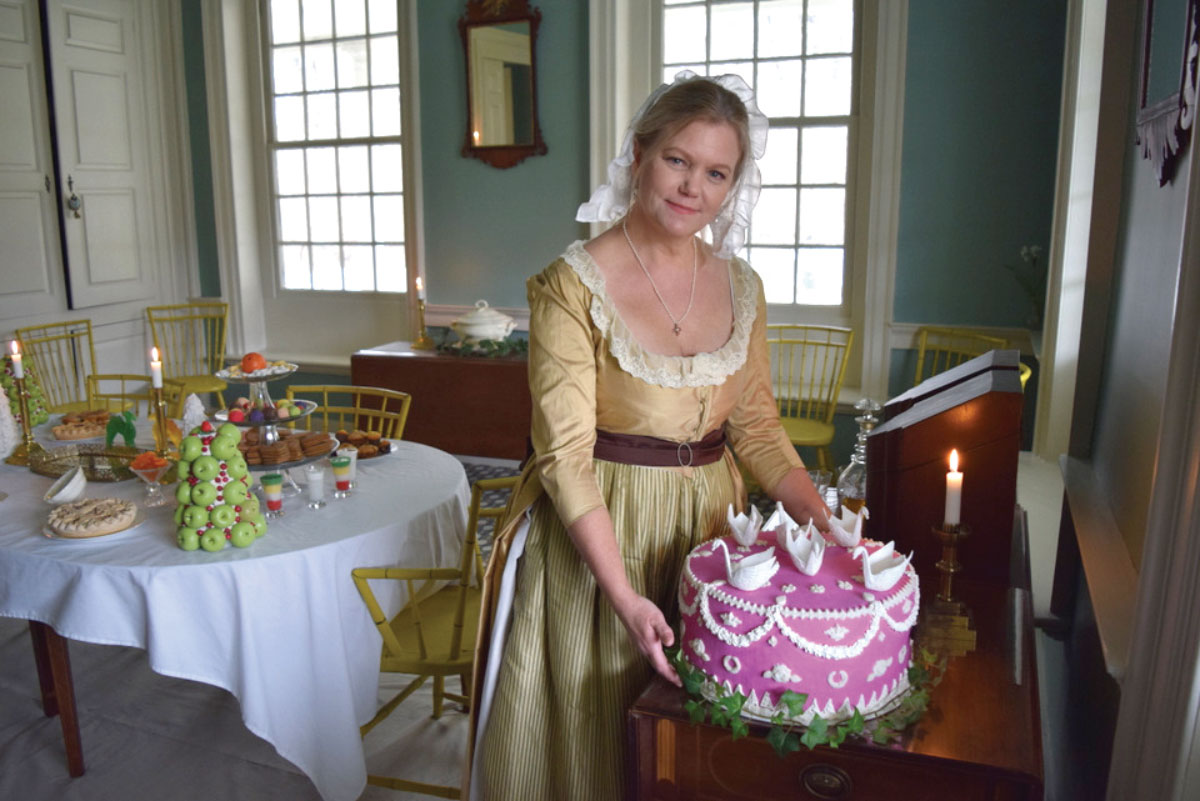 The holiday tours at Rock Ford Plantation focus on the traditional Yuletide celebrations that were held when General Edward Hand and his family resided there. Photo courtesy of Rock Ford.

The public is invited to Rock Ford, home of Revolutionary War general and Pennsylvania statesman Edward Hand, to revisit a time – late 1700s – when Christmas Day was “only the beginning” during the historic Yuletide celebration. According to Samuel C. Slaymaker, executive director of Rock Ford Plantation, “This is a celebration of the Christmas season as would have happened during Edward Hand’s time living here. Hand was Anglo-Irish and would have celebrated the old English traditions. We call it Yuletide at Rock Ford for a historic reason,” he says, referring to the 12 days of Christmas. “The Christmas season would begin on December 25, commemorating Christ’s birth, and go on until twelfth night on January 6.” 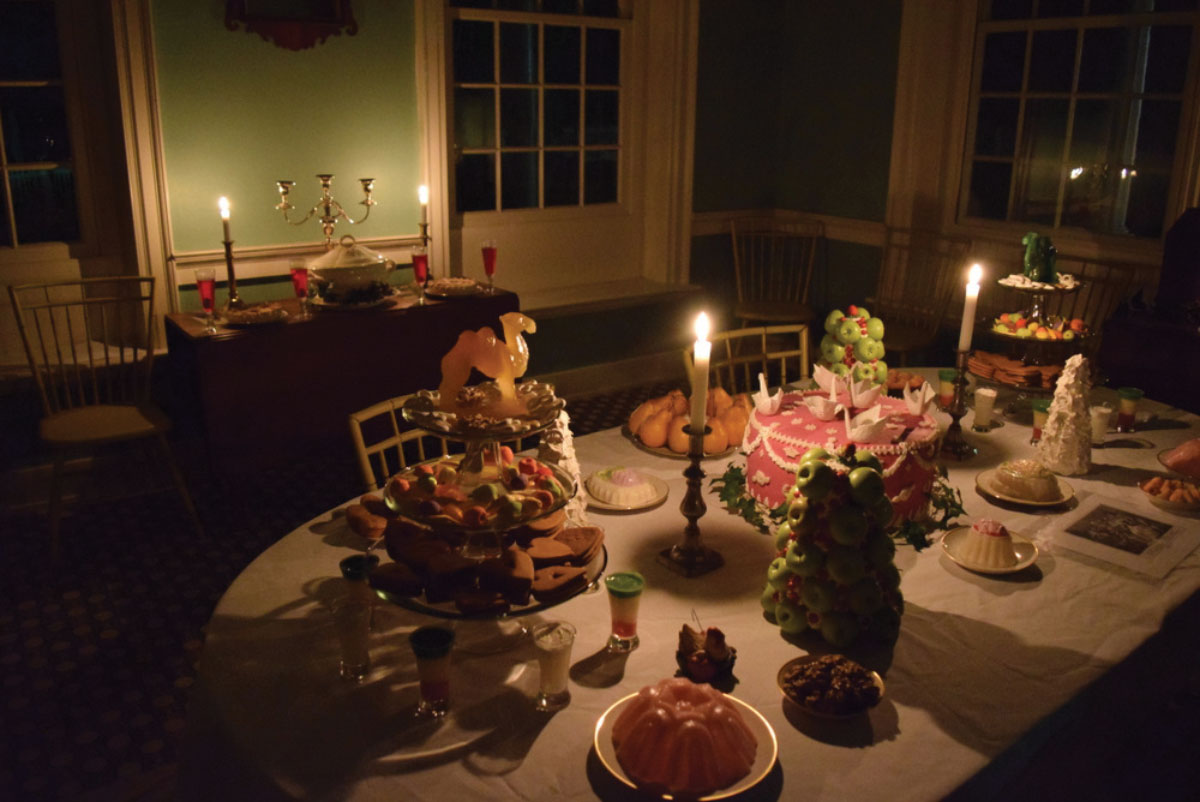 Yuletide at Rock Ford, a tradition started by the Rock Ford Foundation in the 1960s, has evolved over the last 10 to 15 years, morphing from simply decorating for the holidays into one with more of a historical focus, as today’s open-house style celebration features period music, dance and cooking demonstrations.

Candlelight evening events will take place on December 26 and December 27 (4-8 p.m.), while one daylight celebration will be held December 28 (10 a.m.-3 p.m.). “It’s very pretty and very relaxing,” Samuel says. “People are welcome to come and walk from room to room. They can stay as long as they want and leave whenever they want.” 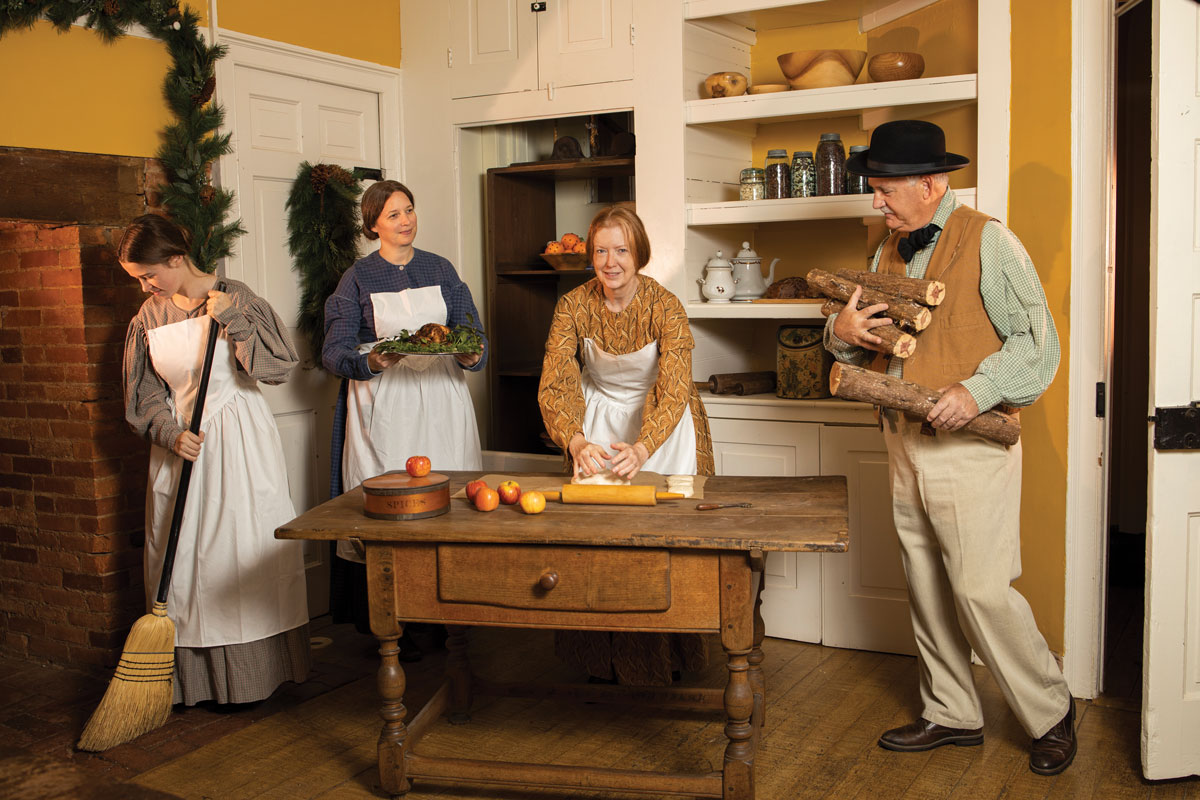 Wheatland’s holiday celebration will acquaint visitors with the ways in which the President’s staff celebrated Christmas. Photo courtesy of LancasterHistory.

Another of Lancaster County’s historic properties also celebrates the yuletide. This year, Wheatland, home of President James Buchanan, is moving away from simply welcoming visitors to tour the mansion decorated for the holidays Victorian-style and instead is presenting Yuletide at Wheatland: Christmas Below Stairs. The guided tours, running six times a day, Monday through Saturday, November 25-December 30, will take visitors “below stairs” to learn about Buchanan’s domestic help and how the housemaid, butler, etc., would have celebrated during the mid-1800s. From advent calendars to mistletoe, guests will learn about German and Irish Christmas traditions while touring both floors of the historic mansion. 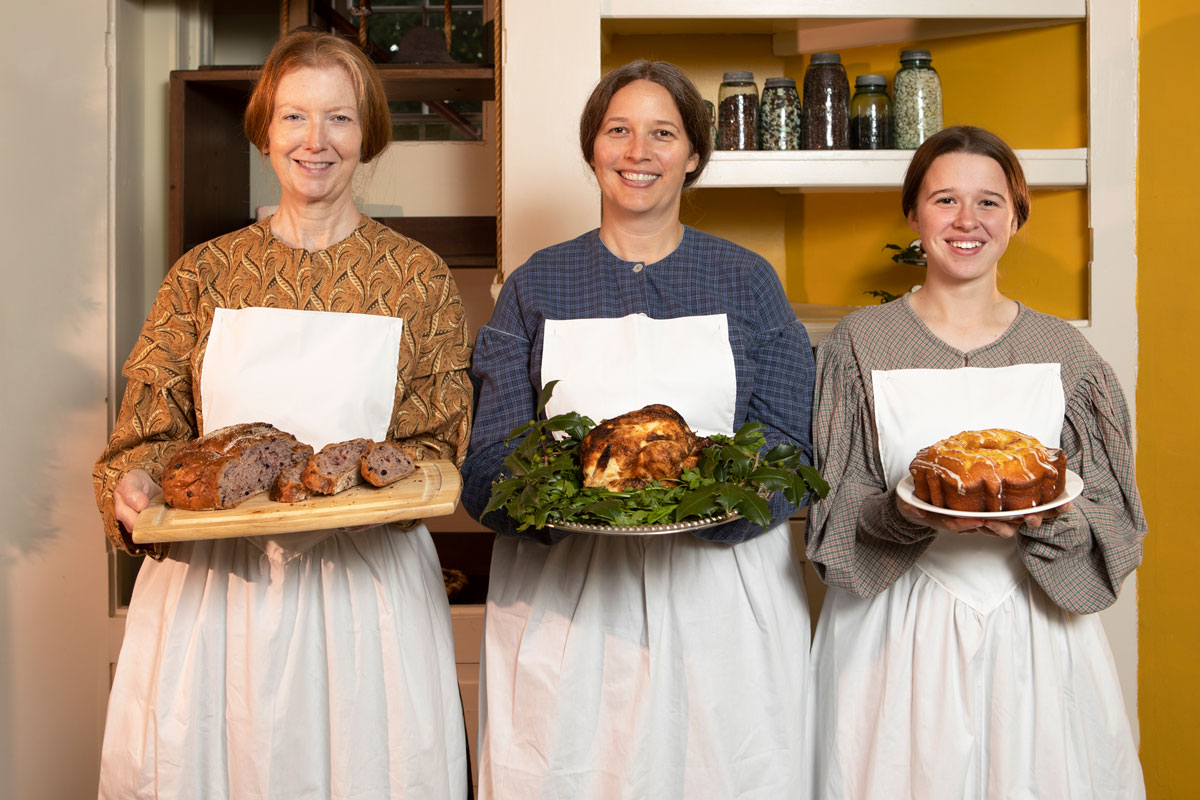 Prior to the one-hour tour, visitors are invited to view the film Buchanan’s America: A Nation Divided. Tickets for Yuletide at Wheatland also include admission to the self-guided exhibits at LancasterHistory. The newest is Lancaster in the 60s, which delves into conflict, resolution and protest during the 1660s, 1760s, 1860s and 1960s. 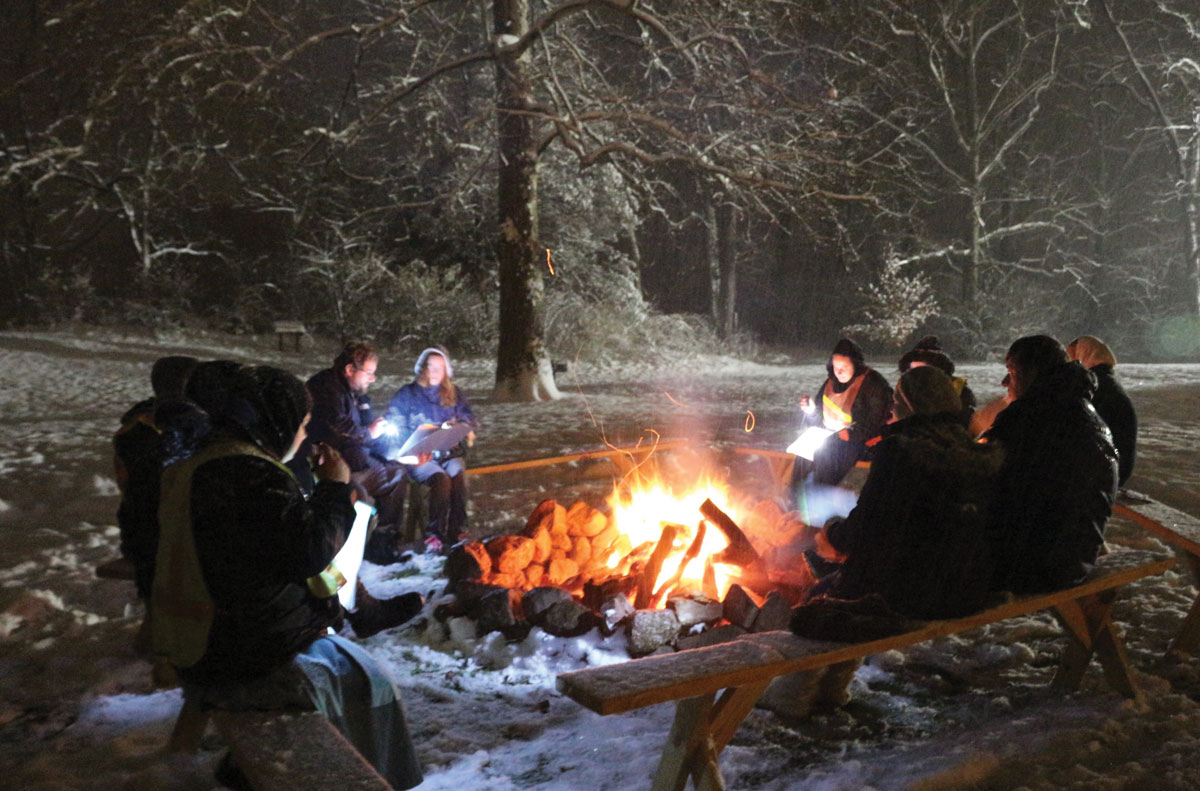 Historic Poole Forge, a property that may not be a household name like Wheatland and Rock Ford, is situated in eastern Lancaster County. However, it does have a Wheatland connection. The once-bustling iron forge is said to have been a summer stop for lawyer, statesman and future president, James Buchanan.

Every other year, a special holiday celebration takes place at Poole Forge called Christmas at the Ironmaster’s. It’s a celebration of community and culminates in an exquisite Christmas tree decorating exhibit in the circa-1770’s mansion, which was added to the National Register of Historic Places in 1980.

In need of an event to fill the off years, Executive Director Dawn Rise Ekdahl turned to the ancestral roots of the area. “We used to do absolutely nothing on the off year, but I would get phone calls from people asking us to do something,” says Dawn. “Up to that point, we had never done anything highlighting our Welsh heritage.” Welsh Christmas Eve was devised to celebrate the area’s Welsh heritage. 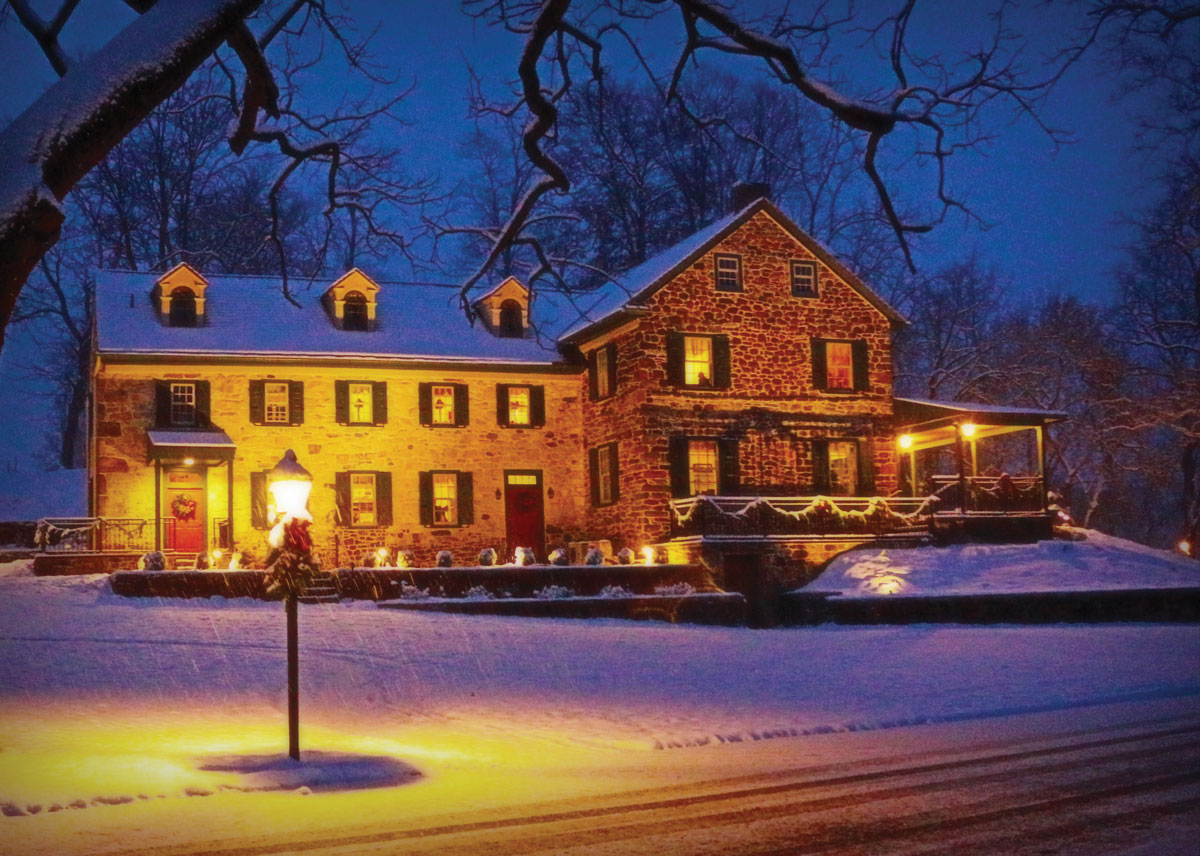 As this is an off year, the one-night-only Welsh Christmas Eve will take place on December 14 (4-8 p.m.). The celebration will feature the Amity Colonial Dancers, caroling, toffee making and a bonfire. The tradition of toffee-making on Noson Gyflaith (Toffee Night) in old Wales focused on a gathering of friends for supper before concocting the sticky candy. Caroling and bonfires have survived into modern Christmas celebrations.

“There’s a Welsh New Year’s tradition we incorporate as well called Calennig. I wanted a craft activity for kids, and this is kind of like our trick-or-treating,” explains Dawn. The popular custom of Calennig, as done in olden days, saw groups of young boys visit all the houses in the village with water from the local well. Dipping a bough of twigs into the water, the boys would splash townspeople, chant a verse or two of merriment, and receive a gift – usually a few coins.

“There’s some pretty weird Welsh traditions, too,” says Dawn, who shares she decided to pass on Mari Lwyd, the parading of a decorated horse skull through town.

Other holiday events that will be taking place in historical settings – including entire towns – are Lantern Tours at the Ephrata Cloister (ephratacloister.org), December 26-29.

Landis Valley Museum (landisvalleymuseum.org) will be hosting Belsnickel dinner and lunch tours on December 10 and 14, Christmas in the Village, December 7-8, and the annual Holiday Bonfire on December 13.

Lititz Historical Foundation (lititzhistoricalfoundation.org) will host its annual Candlelight Tour of the museum and Johannes Mueller House on December 13.

Wheatland’s holiday celebration will acquaint visitors with the ways in which the President’s staff celebrated Christmas. Photo courtesy of LancasterHistory.