History books will tell you the War of the Roses ended in England sometime around 1487, with the last significant victory going to the House of Lancaster following the death of King Richard III of the House of York. On this side of the pond, the battle rages on in South Central Pennsylvania. However, in this modern-day “war,” the royal houses have been replaced by Lancaster and York counties, the soldiers are now athletes, and the battles take place on the ballfield.

It’s great to root for the home team! The Lancaster Barnstormers have been representing the Red Rose City and Lancaster County since their first season in 2005. On many a warm summer evening, you’ll see “GAME DAY” signs around the stadium. That section of North Prince Street becomes electrified when the team is in town. If the York Revolution is visiting – representing the White Rose City – it’s “code RED,” and a sea of red-clad Barnstormers’ fans fill the stadium to show their support. The games between the two teams are referred to as the War of the Roses Series.

Baseball has become more than a game; it’s a social and entertaining experience. If you happen to be driving by, don’t be surprised to find yourself curious enough to park. The smell of ballpark food and the excitement in the air are alluring. It’s nice to stop after work, grab some dinner, then head to your seat and socialize a bit. There are even alcohol-free sections, which can be nice when you bring the whole family along.

The kids love to get there early and hit the playground. There are typically a number of activities for young people spread out around the stadium before the game. Be sure to keep your eyes open for a giant furry red cow – it’s Cylo, the team’s mascot, who’s always up to something. His 13th birthday will be celebrated August 4. He’s active with the kids and so are the Barnstormers.

The team hosts multiple themed nights throughout the season, with some especially focused on young people, such as Scout Night (the girls get their due on August 4). The theme for the August 4 game is Celtic Night and will feature music, dancing, sheep herding, vendors and more. August 5 is being celebrated as Star Wars Night; costumes are encouraged.

Many Saturday night home games conclude with a very nice fireworks display (upcoming dates are August 5 and 12 and September 2 and 9), making it a great way to end an affordable and entertaining evening.

Be sure to check out lancasterbarnstormers.com for all the details on what’s happening at the ballpark! 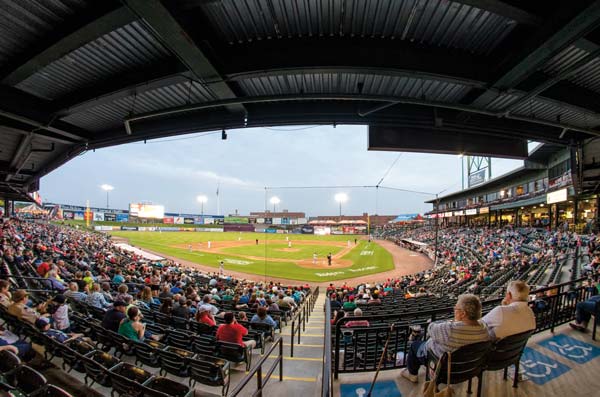