Does your bucket list include traveling to New Orleans to celebrate Mardi Gras? If that’s not in your cards for 2023, you can at least indulge in a treat – the beignet – that is specific to New Orleans, thanks to the opening of Lancaster Beignet Co. The good news is that unlike our fastnachts that are generally only available on Fat Tuesday – February 21 this year – beignets are available year-round. 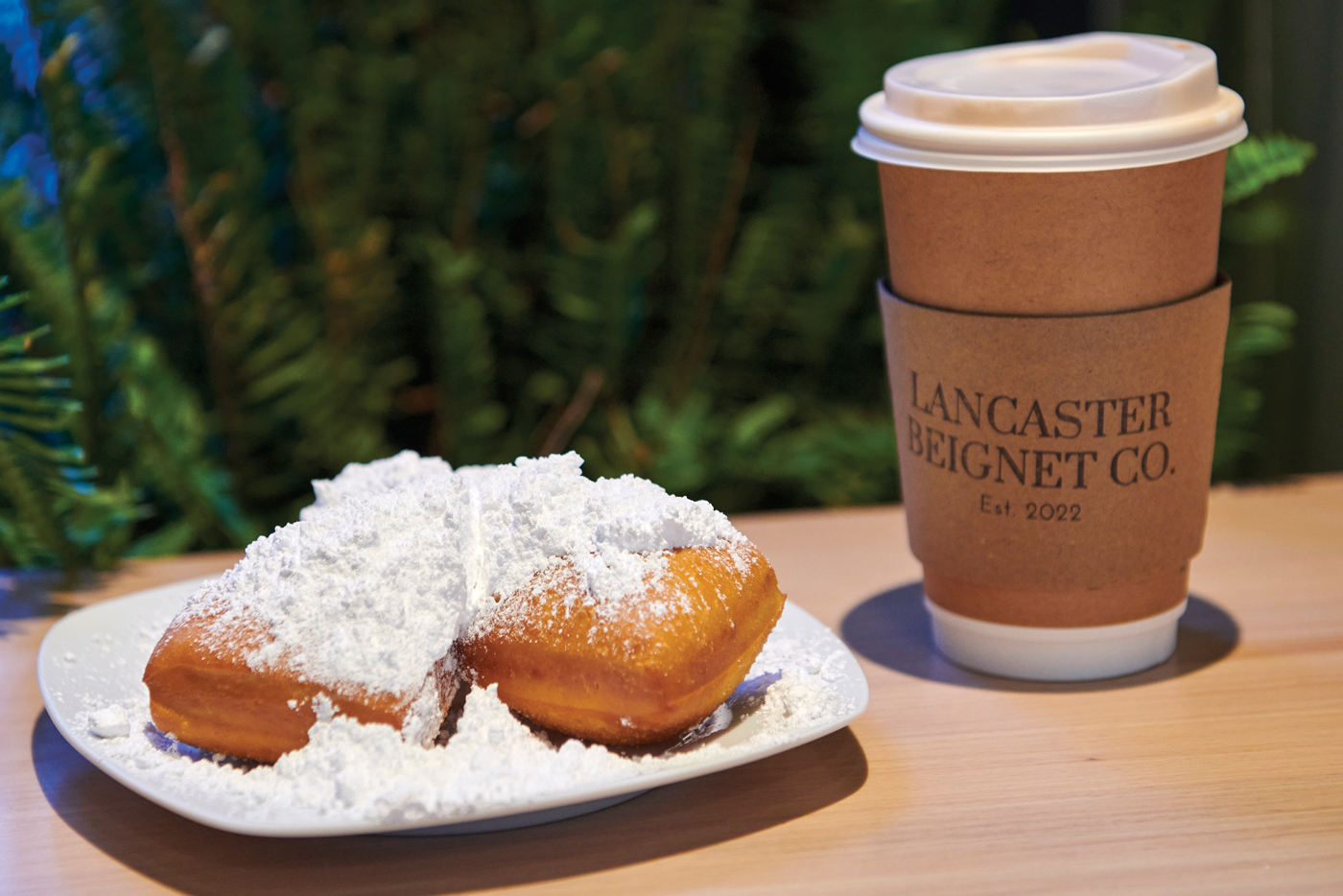 A taste of New Orleans has come to the area, thanks to the opening of Lancaster Beignet Co., which is located on North Prince Street. Owned by Annie and Collin Dawkins, the beignets take their inspiration from a Dawkins family recipe. As with all beignets, the Dawkins’ version features a generous topping of powdered sugar. The café also serves the perfect accompaniment to beignets: coffee. Among the choices are a Ugandan blend from Lancaster County Coffee Roasters and café au lait, made with the famous chicory blend from Café du Monde in New Orleans.

First things first, for the uninitiated, beignet is pronounced “bin-yay.” Second, beignets are not a version of funnel cake, which is an oft-made comparison. Louisiana locals might consider them a French donut and therefore, it could probably be argued that the beignet is a cousin to the Pennsylvania Dutch fastnacht.

These square, airy donuts that are served hot out of the oil and are doused with tons of powdered sugar are at their best when they’re dunked (sugar and all) in chicory coffee. Chicory is essential for a New Orleans-style café au lait. Derived from a woody root, roasted chicory adds robust earthy and woody flavors to coffee, making it slightly bitter. Café au lait, however, is typically brewed using a drip or French press method; scalded milk is added, although steamed milk is now more common, thus adding a note of sweetness to the beverage. 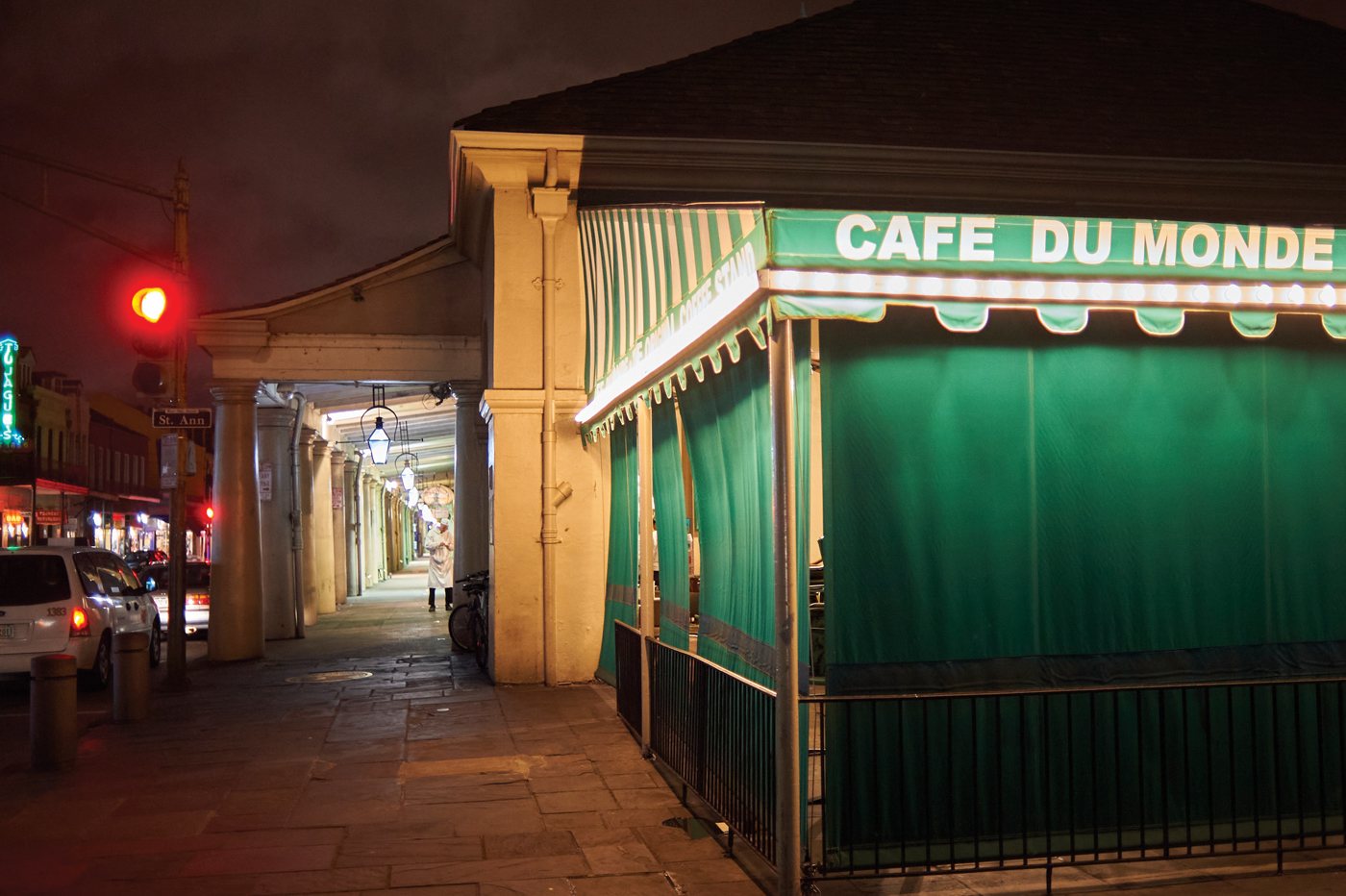 The world-famous Café du Monde has been a fixture in New Orleans since 1862.

I was fortunate to have lived in Baton Rouge for a time. Needless to say, I often ventured to New Orleans, where one of my favorite haunts was the famous Café du Monde in the French Quarter. Dating to 1862, it is open 24 hours a day, seven days a week and only closes for Christmas and hurricanes. Owned by the Fernandez family since 1942, it has carried on the tradition of operating as a coffee shop, only breaking with its status quo in 1988, when it added iced coffee and soft drinks to the menu. Over the years it has expanded to include 10 locations in and around New Orleans. Café du Monde also operates a lucrative online store that offers mix to make your own beignets and its signature bright-orange cans of chicory coffee.

My favorite time to visit this beignet and coffee mecca was mid-to-late winter (after the hoopla of Mardi Gras festivities). Tourists and the often hour-long line had vacated by then, leaving the streets and seats wide-open. With a chill in the air and the bellow of a lonely trumpet echoing down streets paved with stone ballast, hot beignets and café au lait hit the spot on a winter’s day.

While I love Pellman’s cheesecakes, every time I hear jazz legend Louis Armstrong singing his song, Cheesecake, I cannot help but sing along, trading his weakness for mine: beignets.

Finding someone to make me beignets locally was always a penultimate hope. In the summer of 2022, a promising venture – Lancaster Beignet Co. – announced via Instagram its plans to open on North Prince Street in Lancaster. My optimism wavered between glass-half-empty to glass-completely-empty: it seemed too good to be true! 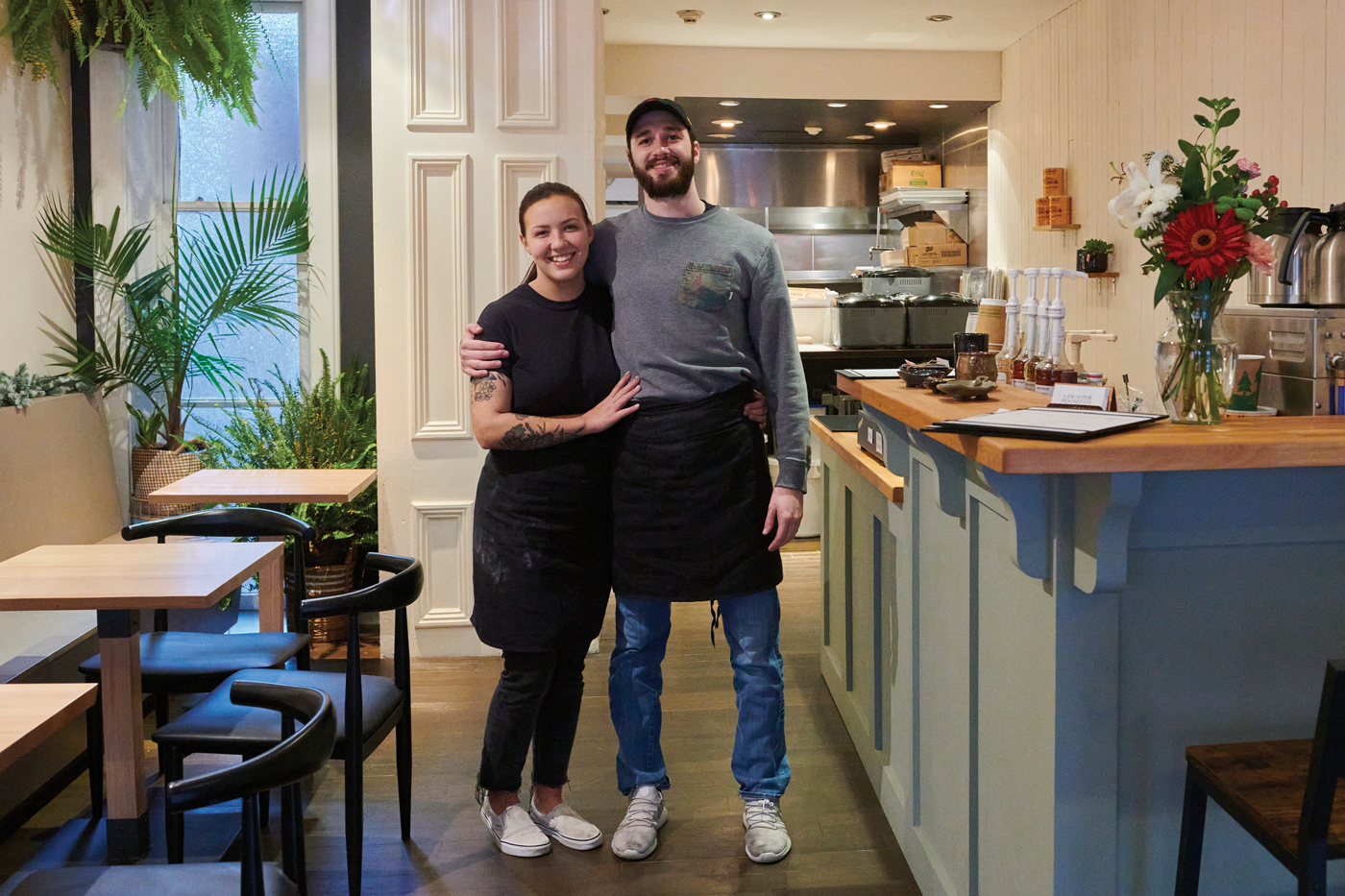 Annie and Collin Dawkins launched their business in a community “cloud kitchen” in the city, offering take-out and delivery of Cajun-inspired menu items. Their brick-and-mortar café made its debut in the fall of 2022, specializing in beignets, breakfast sandwiches and coffee drinks. The public’s enthusiastic reception now has them contemplating adding other services to their venture.

By August, owners Annie and Collin Dawkins had taken the next step by leasing space that was formerly occupied by the restaurant, Ma(i)son. That sounded promising!

The pair had found their footing during the pandemic, working out of Crowded Kitchen Community Cookhouse on North Plum Street as Mississippi Gumbo Cajun Kitchen. Described by Collin as a “cloud kitchen,” they only offered delivery and take-out of prepared family recipes such as gumbo, po’boys and beignets. 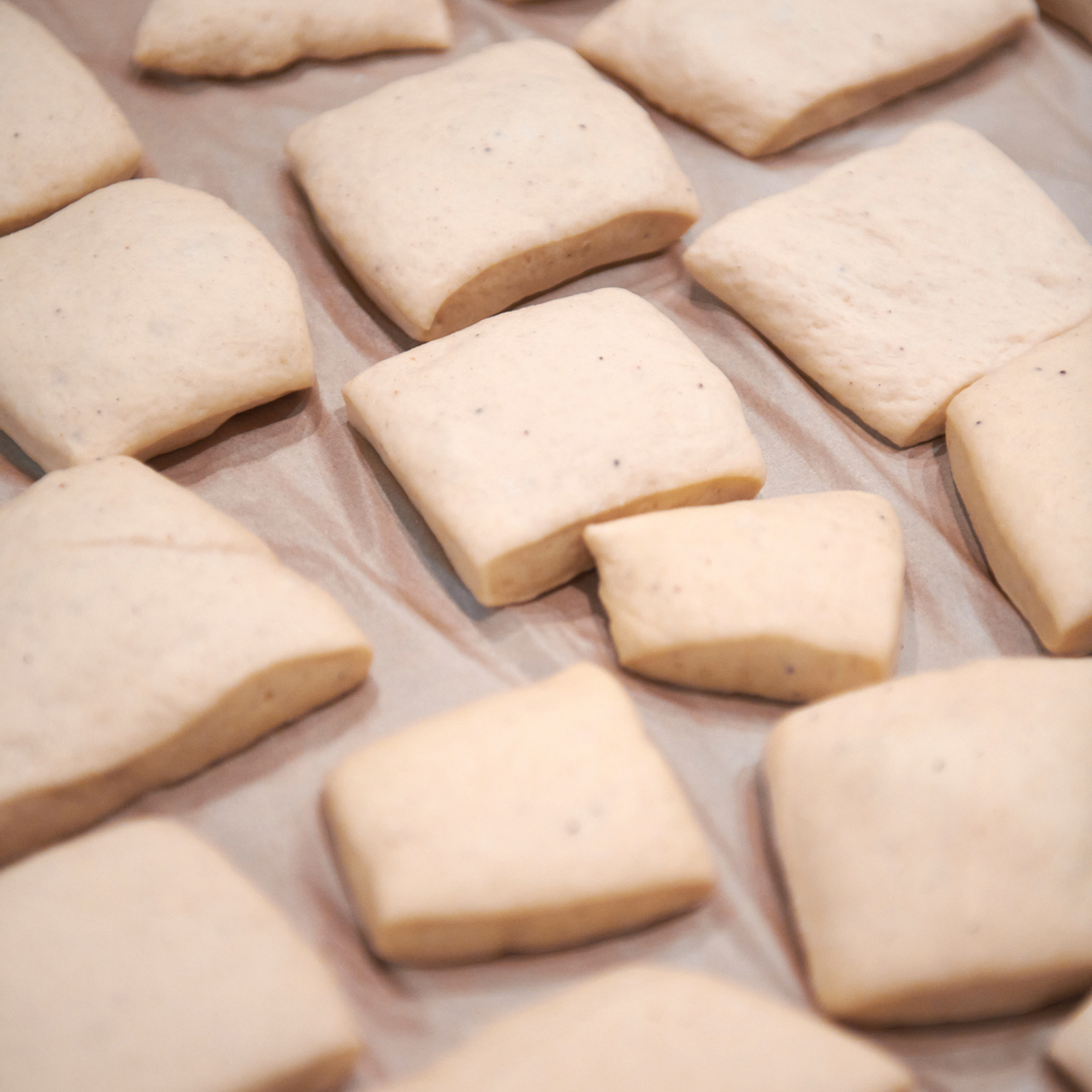 The process of making beignets begins with leavened dough that is cut into squares and then is proofed on baking sheets.

Their beignets were a stand-out item. “There’s something that people connect on, that we picked up on,” says Collin of the popularity of the confections. The success of their venture prompted the couple to contemplate opening a brick-and-mortar café of their own. 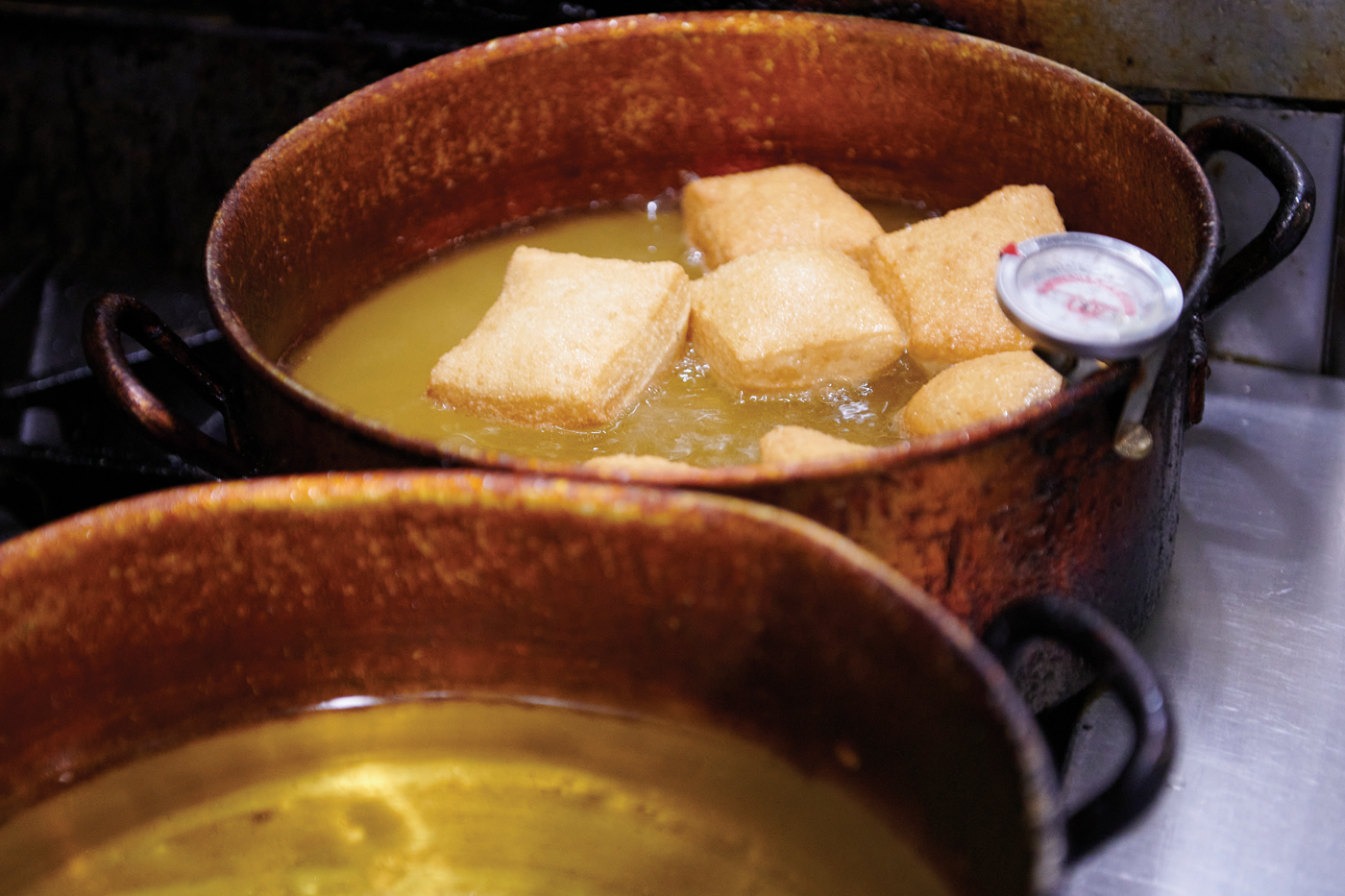 Beignets are then fried in hot canola oil.

One ace up their sleeve is the Dawkins family’s southern roots – Collin grew up in Tennessee – through which a heritage of family recipes came to be enjoyed across generations. “My mom and dad would make beignets,” Collin says of childhood memories created by Morgan and Jennifer Dawkins. Homemade beignets celebrated birthdays in the Dawkins family. As for a New Orleans connection, he remembers taking summer trips to the Crescent City from his grandparents’ home in Picayune, Mississippi. 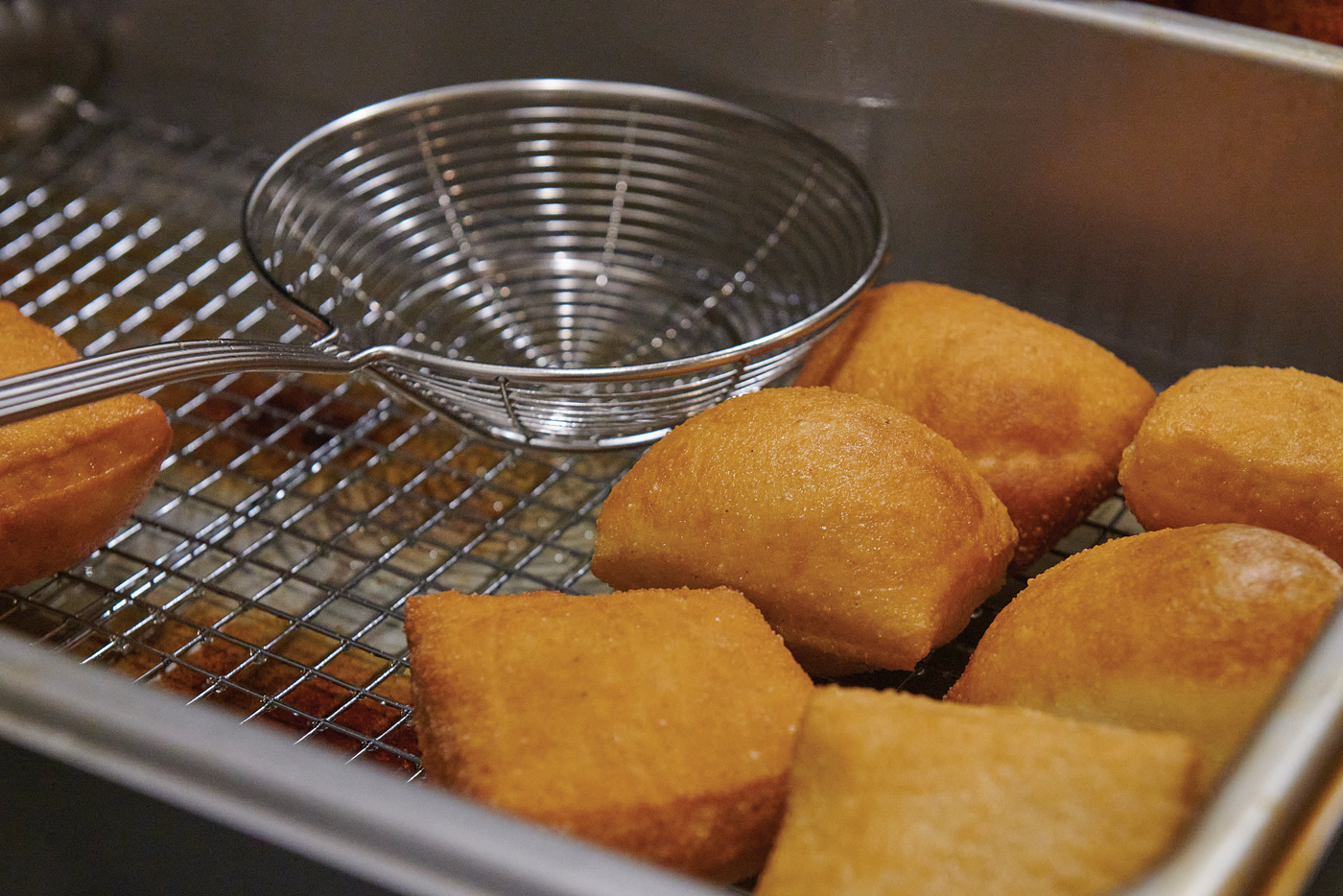 The beignets come out of the fryer with a light and airy texture. They are then topped with generous servings of powdered sugar.

Collin and Annie, who hails from North Pole, Alaska, met as high school students in Oxford, Chester County. They went on to attend Millersville University and elected to put down roots in Lancaster following their marriage. 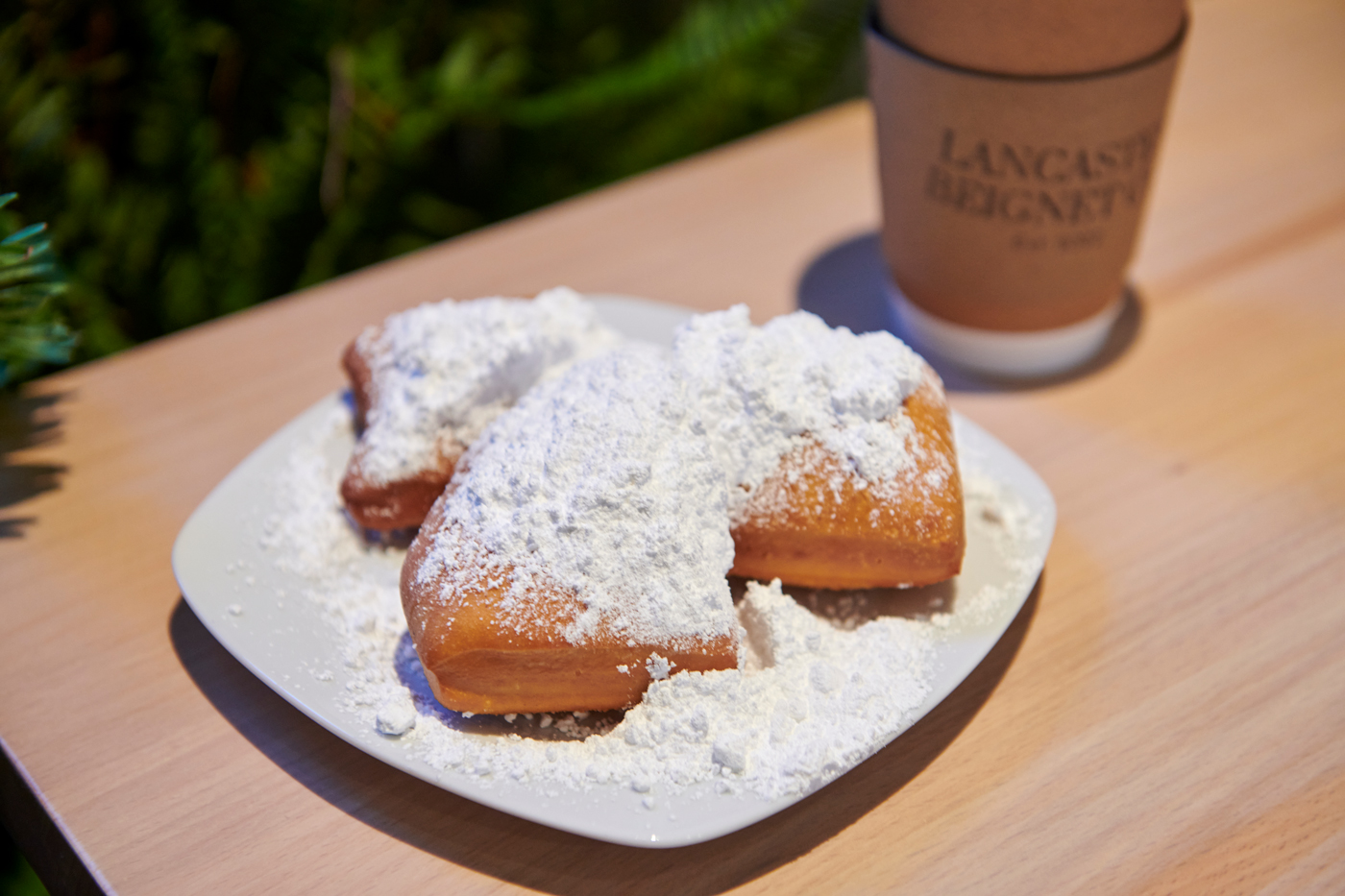 As for their delicious beignets, “We use a family recipe,” says Collin. “I’m not sure where it came from, it’s just the one we’ve always used.” However, Collin and Annie made a few tweaks to the recipe and brought it to scale, due to the fact that they initially (and quickly) sold out of product before increasing their dough-making capacity. “Not everyone knows what a beignet is,” reports Annie’s mom, Laura Maloney. “They come in because they are curious and leave with a newfound love of beignets.” 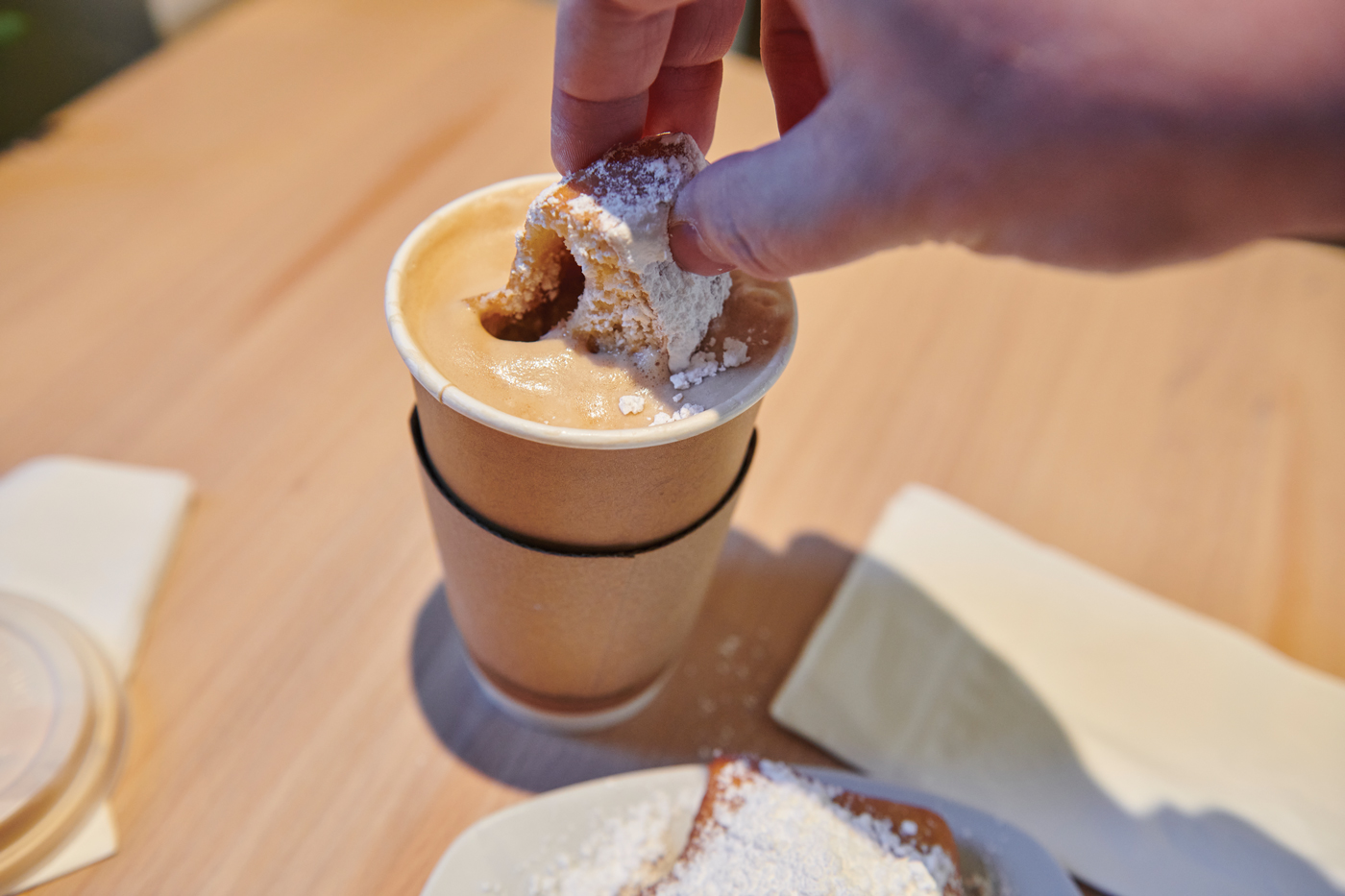 The best way to enjoy a beignet is to dunk it in coffee or in this case, café au lait.

Lancaster Beignet Co. opened on October 22 (2022) and was embraced by foodies (and those who simply love beignets) as a great addition to Lancaster’s diverse culinary scene. The menu features beignets (including Beignet Bites for small appetites), Beignet Breakfast Sandwiches and a variety of coffee drinks, including café au lait made with Café du Monde’s coffee-and-chicory blend. On First Friday in December, Lancaster Beignet Co. joined the festive atmosphere in Downtown Lancaster by offering po’boys and gumbo, which is made using Collin’s version of a family recipe. The menu served as a callback to their cloud-kitchen days. Hoping to have the items available from 5-7 p.m., both the gumbo and po’boys sold out in as little as 30 minutes. 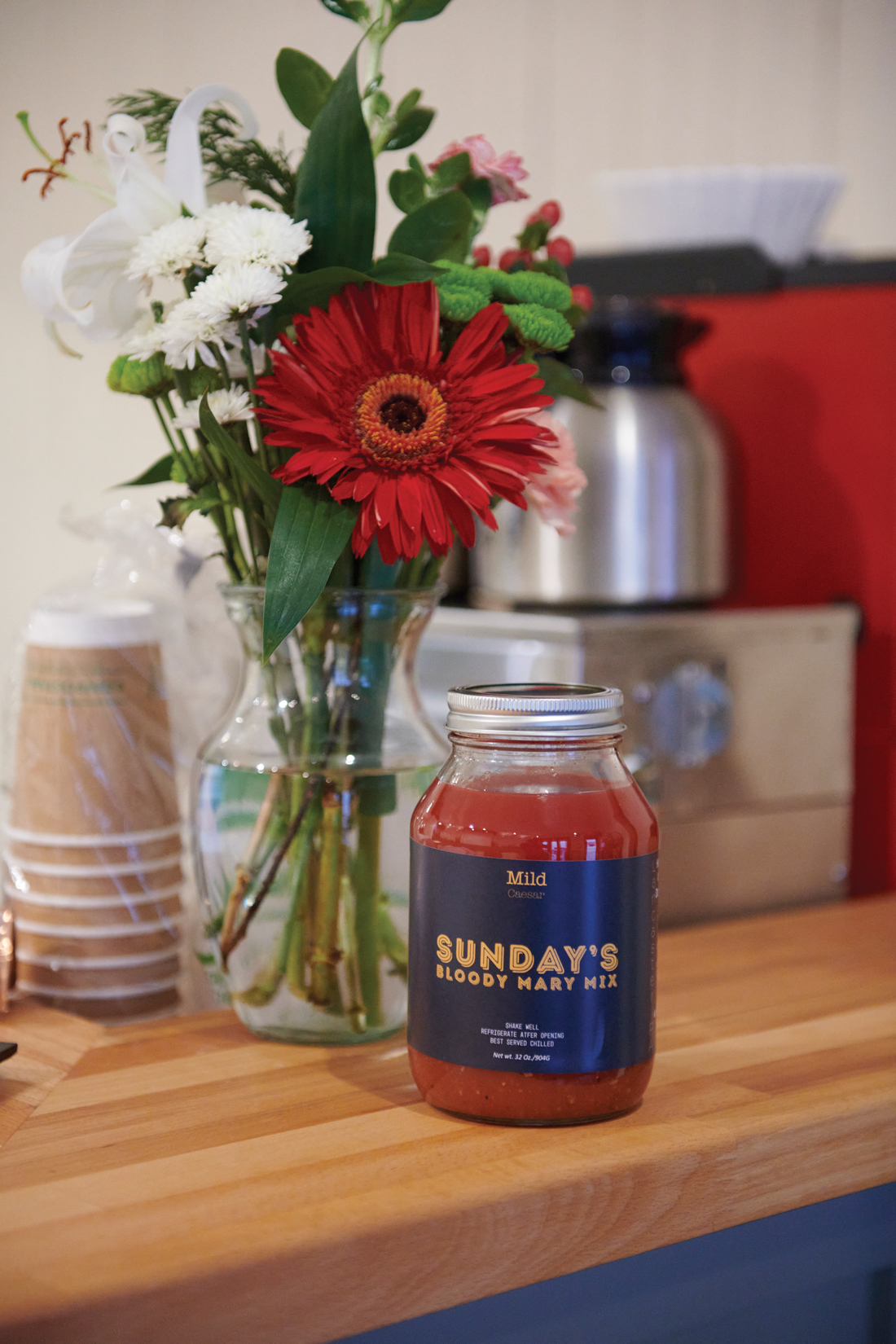 Sunday’s Bloody Mary Mix, which was created by Annie and Collin, is available for purchase at the café. It has also gained a fan base of local restaurant owners who purchase it for use in their bars.

Annie and Collin see their horizons expanding. They have created Sunday’s Bloody Mary Mix, a jarred cocktail mix that is sold directly to consumers and is used at local restaurants. (After years of trials, I’ve discovered a Bloody Mary pairs well with coffee and beignets to kick-off a lazy Saturday or Sunday morning.) They now offer delivery via Door Dash and will be expanding the menu to have gumbo available full-time and po’boys on First Fridays. Catering is another venture they are considering. 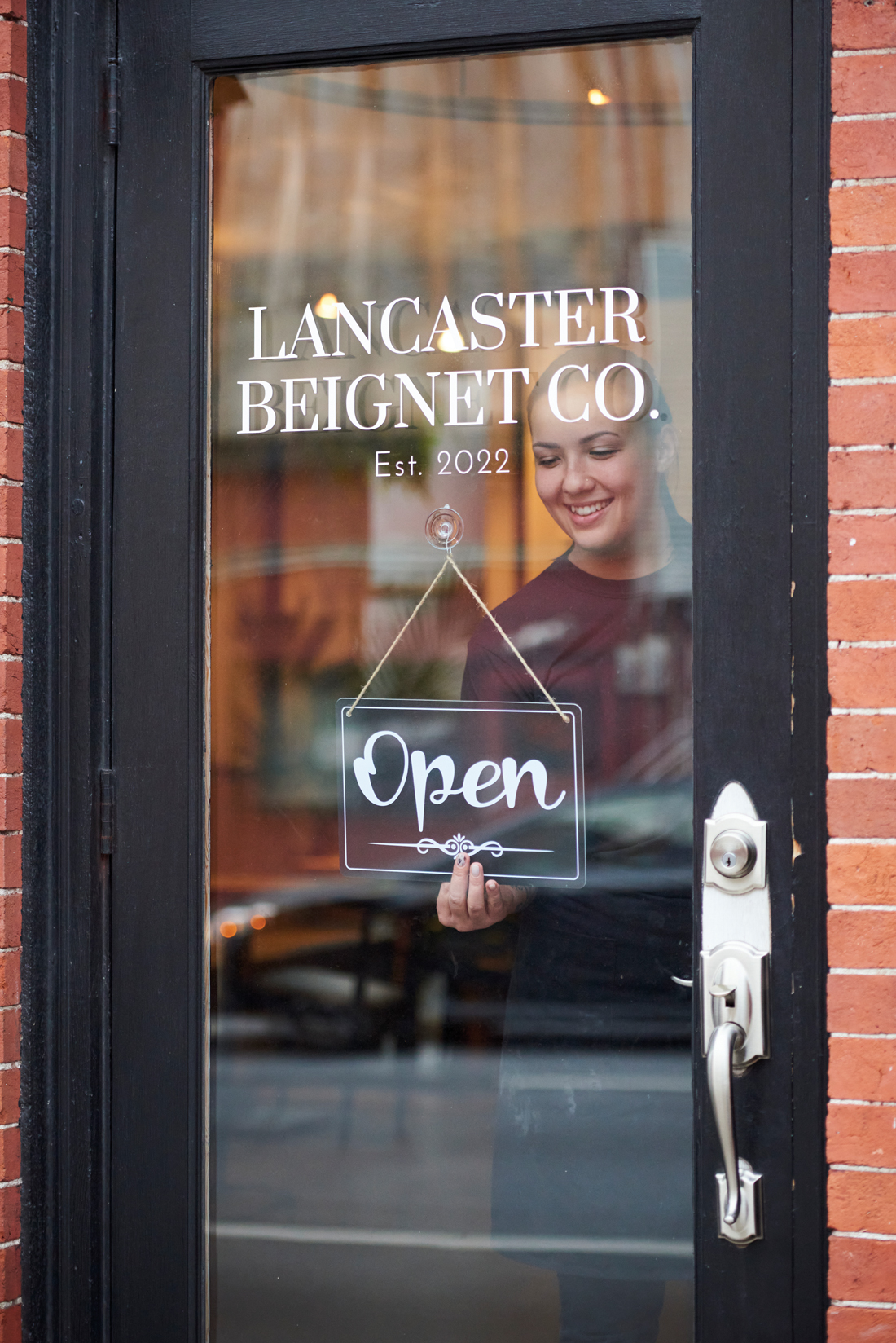 “We want everyone to feel welcome, that you belong here, [enjoying] high-quality food and beverages,” says Annie. “We care about the products,” she says of their efforts to source ingredients that are ethically and locally produced. “I love seeing the reactions when we bring the food out,” she continues.

Without a doubt, you’re sure to leave wearing a smile … and lots of powdered sugar.

Lancaster Beignet Co. is located at 230 N. Prince St. For hours and other information, visit lancasterbeignetco.com.

A taste of New Orleans has come to the area, thanks to the opening of Lancaster Beignet Co., which is located on North Prince Street. Owned by Annie and Collin Dawkins, the beignets take their inspiration from a Dawkins family recipe. As with all beignets, the Dawkins’ version features a generous topping of powdered sugar. The café also serves the perfect accompaniment to beignets: coffee. Among the choices are a Ugandan blend from Lancaster County Coffee Roasters and café au lait, made with the famous chicory blend from Café du Monde in New Orleans.