There are a number of eye-catching sights in downtown Lancaster: art, historical monuments, architecture, floral displays and so on. But, one of the most awe-inspiring sights that kids and adults both enjoy and appreciate are the horses and officers that make up the Lancaster City Bureau of Police Mounted Unit. 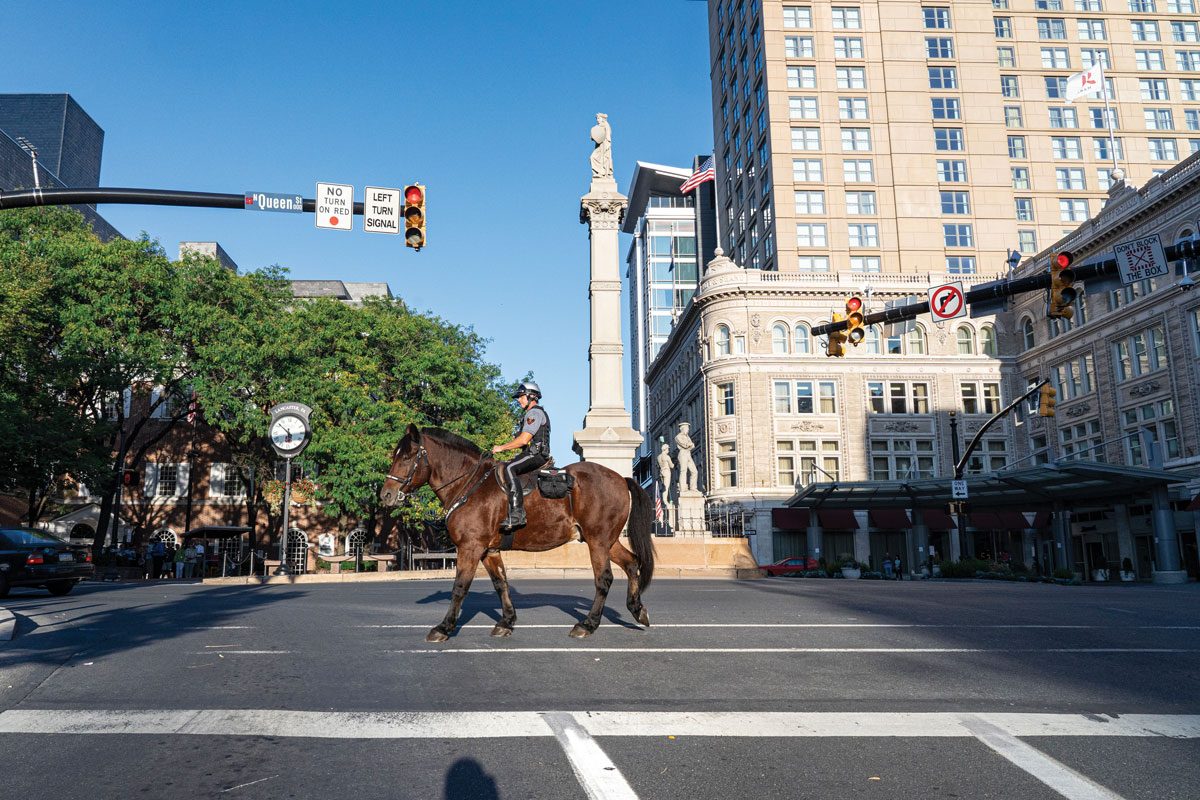 The tradition of mounted police units began in Europe many centuries ago; units are now found throughout the world, including the United States. Lancaster’s unit, which is one of five in the state, was launched in 1979 as part of the city’s revitalization efforts. To commemorate the unit’s 40th anniversary, special T-shirts were designed earlier this year, which pay tribute to all of the equine members that have been part of the unit since its inception.

Currently, four horses and three full-time officers are members of the mounted patrol: Officer Eric Lukacs and his horse, Liam; Officer Scott McDonald and his horse, Ozzy; Officer Greg Berry and his horse, Charlie; and the fourth horse, Duke. 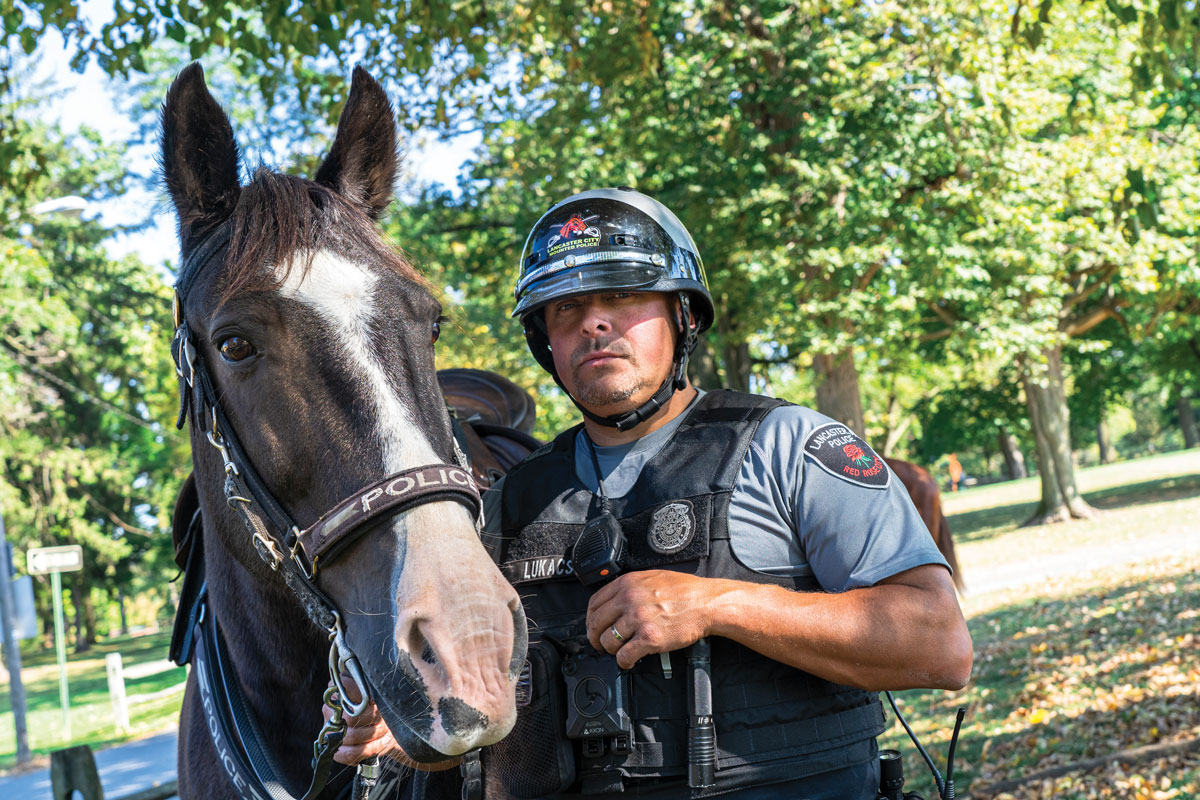 Top to bottom: Officer Eric Lukacs and his horse, Liam, are the main characters in a recently published children’s book titled What Does a Police Horse Do?.

During the beginning stages of establishing the mounted unit, horses were donated, which at times led to issues down the road. Now, horses for the unit are purchased from sources spread throughout the country and beyond. Duke is a 20-year-old Percheron from Toronto, Canada. Liam is an 18-year-old Clydesdale/Hackney cross also from Toronto. Ozzy is a 20-year-old Quarter horse originally from Missouri (his previous life was that of a show horse). And, Charlie, the largest horse of the four, is a 16-year-old big draft-cross breed.

Some police horses are born and then trained at universities. In such cases, training takes place in an arena, where pool noodles, smoke, tarps and other pieces of training equipment are utilized. Officers Lukacs, McDonald and Berry agree that arena training can only go so far.

The horses are housed in the police stables located within Long’s Park; however, the work that goes into training a police horse isn’t just a walk in the park. It can take anywhere from a couple of weeks to several months for a horse to complete its training. As for the human component, it takes eight weeks for an officer to be certified as a mounted patrol officer, but even after the process is completed, one still continues to learn.

“A lot of their desensitizing training is in an arena, and that’s OK for certain things,” explains Officer McDonald. “But, then you get that horse out on the street, and he walks around the corner, and now there’s a jack hammer. This is something he’s never seen before, and I don’t care how much desensitizing you do in that arena, that horse is still going to spook to a point.” 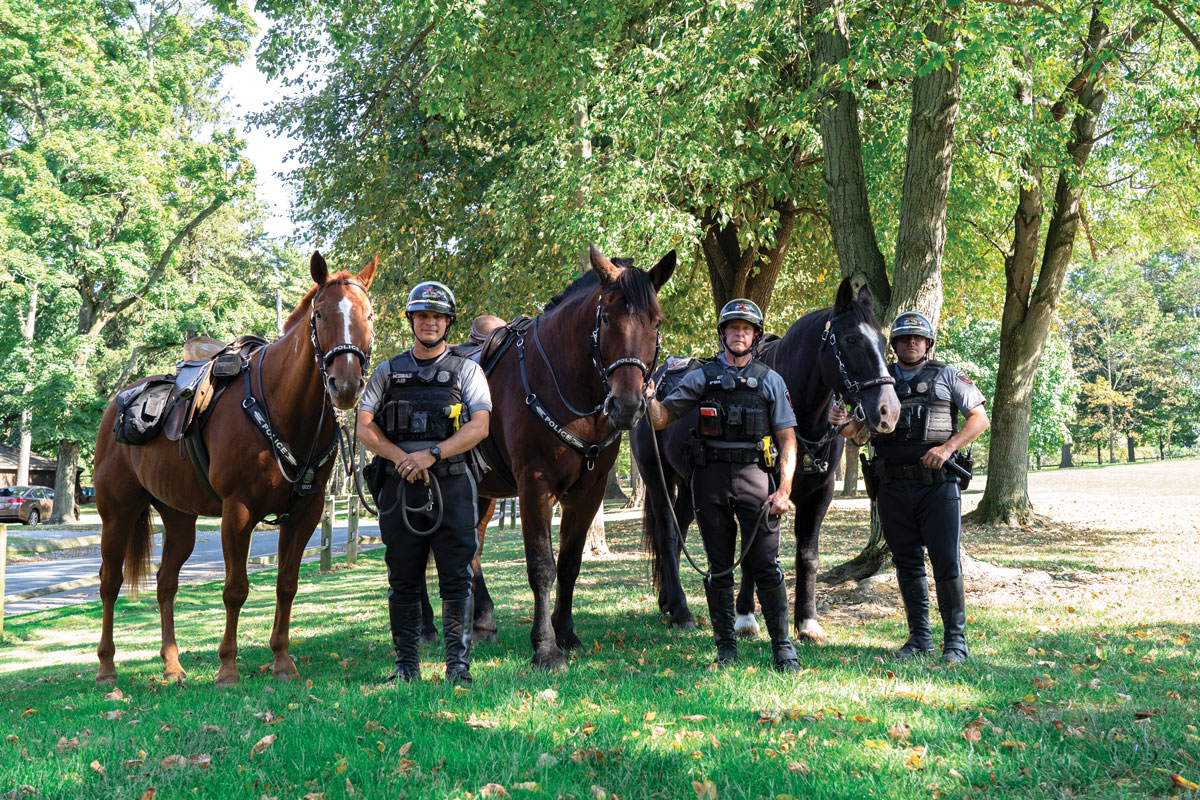 Officer Lukacs suggests taking the horses “out of their element” to receive proper training.

“We don’t train our horses here [at the stables] anymore because our horses are so worried about coming back to the barn because there’s a comfort level here,” Lukacs says. “When we want to raise their stress levels and get the proper training out of them, we’ll take them out of their element somewhere else.”

While some see the majestic four-legged creatures as cute petting pals, there is so much more that goes on behind-the-scenes that many don’t consider while walking about downtown. The city’s mounted patrol force covers a distance that spans from Vine Street to Lemon Street and Water Street to Lime Street – approximately a 10-block area.

“The animals are big ice breakers. Most people aren’t generally going to walk up and just talk to a police officer. Whether we have the horses, or the canine guys have the dogs, it’s something they want to come up and ask questions about,” Officer Berry says. “While they’re talking, they get to realizing that it’s not just a uniform up there, it’s a human being. I’ve had so many people tell me, ‘Wow! This is the first positive interaction I’ve had with the police.’ They don’t have a very good outlook on police officers, and once they get done talking with us, they don’t paint the entire profession with that broad brush that we’re all just out there to hassle everybody.”

The unit provides a highly visible presence throughout the downtown business district and surrounding neighborhoods. They respond to 911 calls, accidents, retail theft, or if someone simply needs help with directions. They also aid in crowd control during events such as Celebrate Lancaster, New Year’s Eve, festivals, parades, etc. They venture beyond Lancaster, as well. Each August, they join with other mounted patrols to work at Musikfest in Bethlehem. 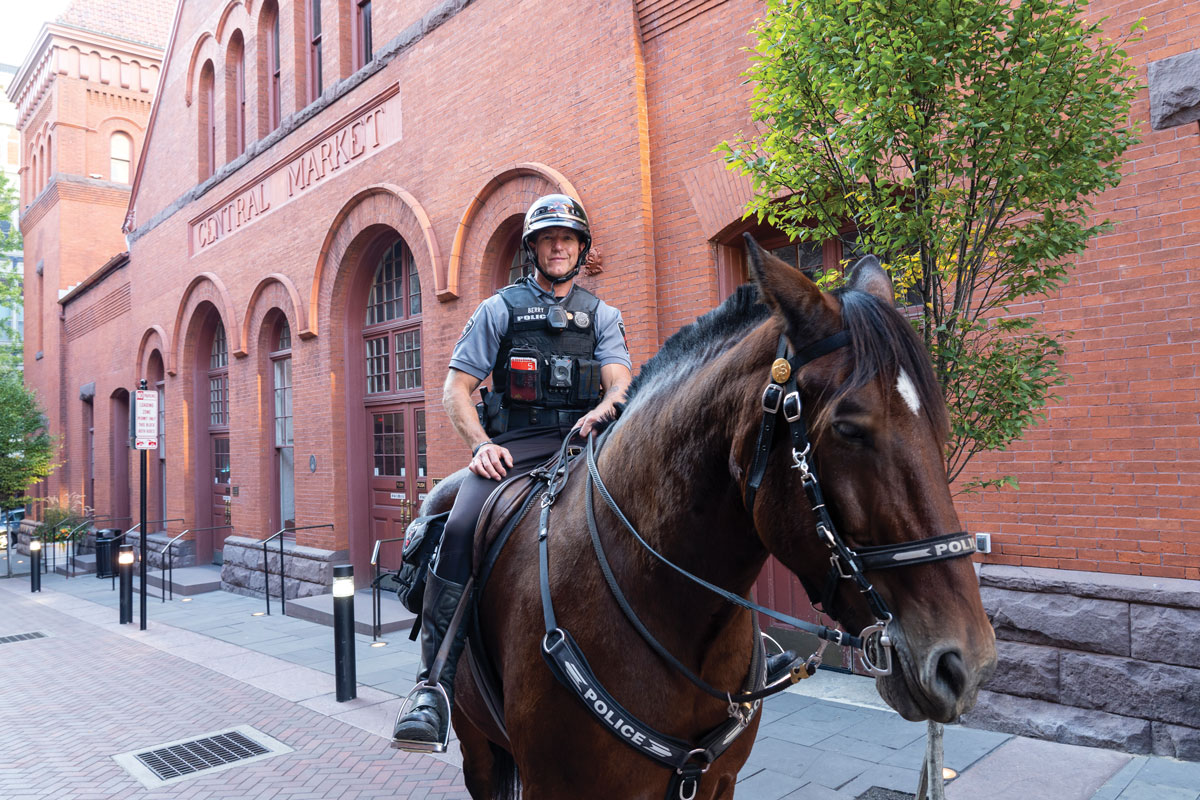 The Lancaster City Bureau of Police Mounted Unit celebrates its 40th anniversary this year. The horses are a downtown fixture on market days and First Fridays.

“I’ve heard it different ways, but the ratio is usually one officer on horseback for crowd control is equivalent to 10 officers on foot in a crowd-control situation,” states Officer McDonald. “People will want to argue with an officer when he tells them to do something, but they can’t argue with my horse.”

The officers and their partners also take time to volunteer at schools, scout meetings, career days, memorial services and more.

Ways You Can Help

The Lancaster Mounted Police Unit serves a major purpose for the downtown area, but it wouldn’t be possible without the help of donations made through the Lancaster Police Foundation. While the officers’ salaries are handled by the city, everything pertaining to the horses – from hay and housing to trucks and trailers – is funded through the foundation and donations.

“There are a lot of mounted units that have shut down in the past several years throughout the country. Most of those mounted units that have shut down is because of funding,” says Officer McDonald. “Horses are not cheap, so if tough times hit that city, and they’re looking to save money, a lot of times the first thing they look to do is cut the mounted unit. So, with Lancaster City, ever since we’ve had a mounted unit, it’s always been funded through donations through a foundation, so it doesn’t cost the city budget or the police budget anything.” Lancasterpolicefoundation.org.

The Lancaster Police Foundation will be participating in the Extraordinary Give being held November 22. If you would like to donate to the mounted or K9 units, their division will be listed under the government entities section. Be sure to write in the memo that you would like to donate specifically to either the mounted patrol or K9 unit. Extragive.org.

Another way of donating to the mounted unit is through fundraising events, such as the Horse World Expo, the Columbia Riding Show and the Susquehanna Equestrian Club’s Pace Maker. T-shirt sales are an on-going fundraising endeavor. 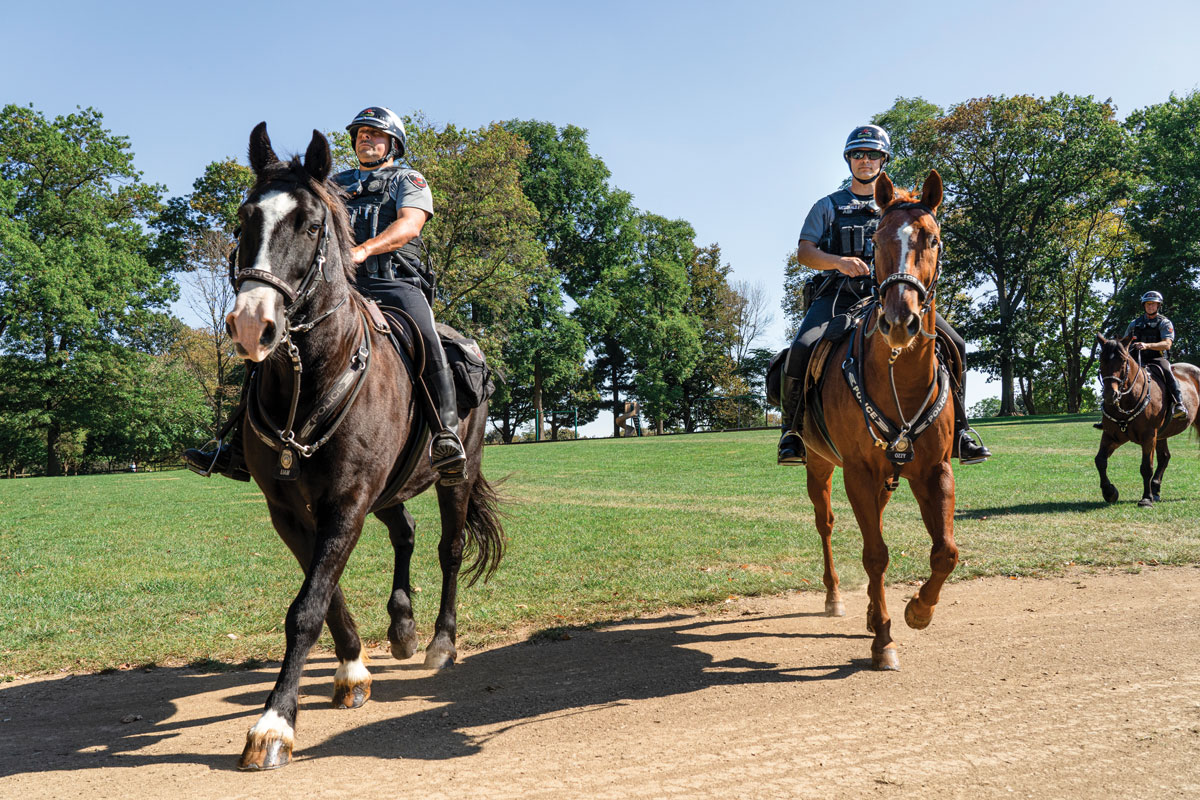 It can take anywhere from a couple of weeks to several months for a horse to complete its training.

A major fundraiser is the popular Santa Stumble, which will be held December 14 in downtown Lancaster. This will be the event’s 10th year. A $10 donation earns you a button that provides access to the drink and food specials at participating bars and restaurants, as well as the costume contest that’s held at Tellus360. A $30 donation earns you a button and a limited-edition scarf. Participants are encouraged to wear creative holiday attire. The mounted patrol and K9 units will have a booth set up in the downtown area, as well. Presented by People of Lancaster, last year’s event raised $43,800. For details, visit lancastersantastumble.com.

Still, another way of helping is to buy a book. Officer Lukacs and Liam have been especially busy this year with appearances at schools and even businesses – they are the subjects of What Does a Police Horse Do?, a children’s book written by Massachusetts author Ellen F. Feld. “We were at the Horse World Expo in Harrisburg with two of our horses at our booth, and we were giving out information, talking to people and selling our T-shirts,” he relates. “The author, Ellen Feld, was there and came over to talk to us. She ended up driving all the way down here from Massachusetts, and we just went through a simulation over two days of what we do in one day.”

A portion of the proceeds from book sales goes toward the mounted unit. “It’s been a good fundraiser for us,” he notes. A recent book reading hosted by Lancaster Cupcake was an instant sellout. Locally, the book is available at Bomberger’s and Whiff Roasters in Lititz; E.M. Herr in Willow Street; Pro Look Uniforms in Rohrerstown; and Pottery Works in Lancaster. It can also be ordered through the publisher, willowbendpublishing.com, and through Amazon.