After learning a friend had developed a passion for foraging, I decided to look into the practice here in Lancaster County. Introducing any wild food into your diet should be done with caution and moderation. Always consult the advice of an expert or a field guide from a trusted source before eating any foraged foods. 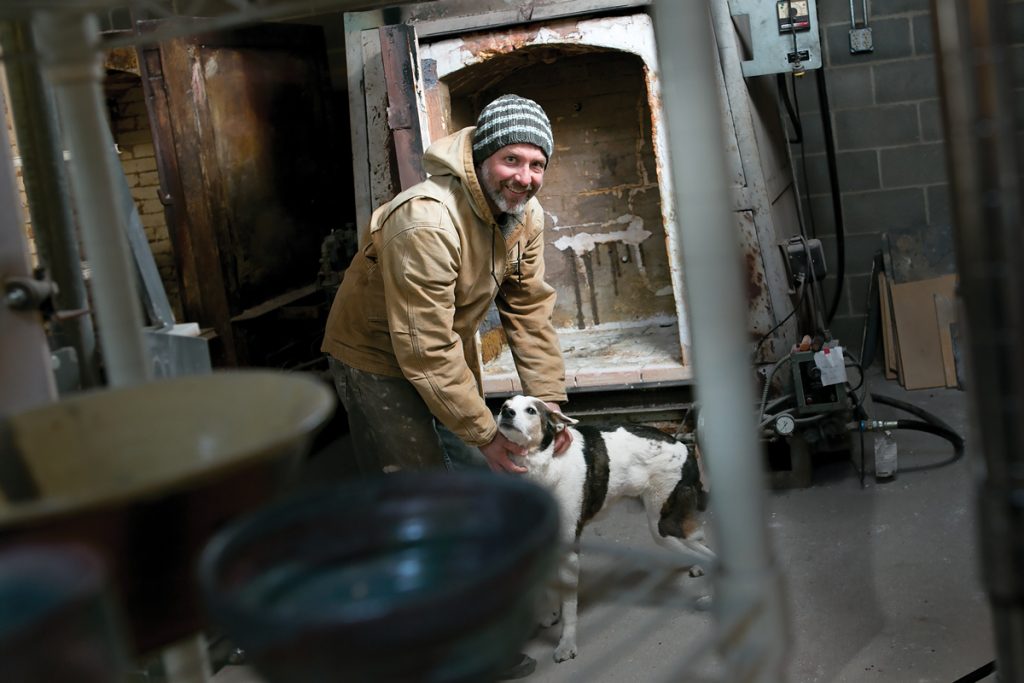 As an artist who uses nature as a medium, sculpturist and potter Kevin Lehman has a special connection to the Earth. For him to find this world bountiful and appetizing seems a simple association. One day, while out in the woods with his friend Casey Spacht (founder of Lancaster Farm Fresh Cooperative and co-founder of Lancaster Farmacy), the two came upon a wild mushroom.

“He said, ‘Hey, you can eat that.’ And, I thought, ‘Okay, here we go, eatin’ mushrooms and …” recalls Kevin. But, the idea stuck, and he has been actively foraging Lancaster County for more than five years. 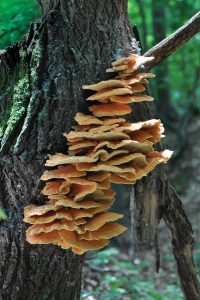 The Chicken of the Woods, Laetiporus, mushroom can be found growing on the wounds of oak trees.

The mushroom that Casey pointed out to Kevin was the Laetiporus, which is commonly known as Chicken of the Woods. This genus of edible mushrooms grows as “shelves” consisting of tiny tubular filaments. This particular mushroom is commonly found on wounds of oak trees. The mushrooms’ young, fruiting bodies are primarily yellow-orange with bright tips. It is one of the most foraged mushrooms in the world.

“These bright-orange mushrooms grow on the sides of trees, and nothing looks like them,” says Kevin. Laetiporus is a great mushroom for beginning foragers, writes Ellen Zachos in her book, Backyard Foraging.

Zachos, an educator at the New York Botanical Garden, lists several other mushrooms new foragers can start with: Black trumpets can be harvested in the summer and fall months and grow near oak and beech trees; hedgehog (or sweet tooth) mushroom caps have no poisonous lookalikes and are easy to identify by their irregular shape and short, spiny “teeth” on the underside; and Hen of the Woods are fast-growing mushrooms usually found in large clumps in the early fall. 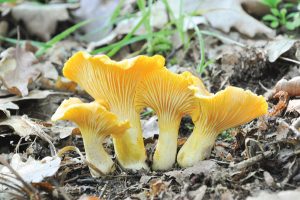 Chanterelles, which are a favorite ingredient in French dishes, grow in small clusters on forest floors.

Some of the most popular foraged mushrooms are chanterelles. Made popular by traditional French cuisine, chanterelles can have a fruity aroma and rich flavor. As attractive as these mushrooms are, they are not the easiest to distinguish from potentially hazardous varieties. Chanterelles are often found on forest floors in small clusters.
“There’s a saying, ‘If you are not 100% sure, don’t eat it,’” says Kevin, passing on words to literally live by. “I started with plants that don’t have lookalikes.” 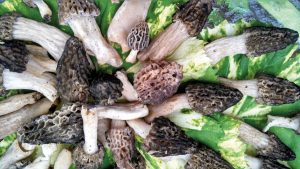 Besides truffles, the most prized foraged-mushrooms are morels. As a foodie, I first heard chatter about foragers finding morels in Lancaster County a couple years ago. The alien-looking fungi is identified by its honeycomb cap upon a white stem. (There are several “false morel” mushrooms, which should be avoided due to toxicity.) What makes this delicacy so prized is the almost impossibility of farming the mushroom on a large scale, so foragers often keep their spots a secret. To satisfy demand from top chefs, morel foraging has become a multi-million-dollar industry. 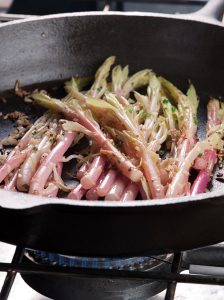 According to a number of Southern-cooking websites, pokeweed and bacon are a match made in heaven.

“Edibles are everywhere,” says Kevin, but that doesn’t mean he is going to simply scarf up everything he identifies as tasty. “To me, it’s more of a bigger picture connection – connecting to the natural world in a new way and developing a relationship with these plants.”

Casey echoes these sentiments almost verbatim. He started distinguishing edible plants and berries as a kid. He’s been foraging ever since. Sustainability – even with things growing in nature – is an issue of concern.

He provides as an example Allium tricoccum, otherwise known as ramps, a wild onion prized for the delicacy of its greens and beautiful garlic flavor. Ramps exploded in popularity several years ago when they began to make their way into new American cuisine.

“They’re here in Lancaster County. Sometimes you can go into the woods and find a whole swath of ramps,” Casey notes, but he is quick to caution those who may be overzealous with their harvesting. “Ramps take a long time to propagate and get that whole community built up.”

His personal choice is to harvest only what he needs, sometimes taking just the greens and leaving the bulbs to extend the life of the plant. He also replants smaller bulbs, which may come up attached with his harvest. Over-foraging will wipe out an entire population; and, once they are gone, they may be gone forever from that area.

Seasonality is important for two reasons. The first is to know when to look for the plant, which is as important as knowing where to look. Fiddleheads (fern sprouts) must be harvested in the spring 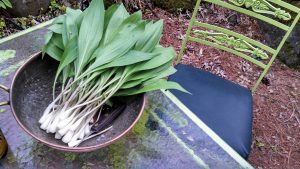 Ramps are increasingly being found in this part of the country. Ramp festivals are held throughout the Appalachian region in the spring.

… otherwise they turn into ferns.
The second function of seasonality is safety. Some plants must be harvested at certain points in their growing cycle. Pokeweed is a traditional staple in southern Appalachian areas, but as the plant grows, so does its toxicity. The leaves and stems are boiled repeatedly and taste like spinach and asparagus respectively, but the purple berries of the plant appearing in maturity are highly toxic and can cause death. “That plant is awesome, but if it gets big, it’s poisonous,” says Kevin.

Pokeweed is not alone in these characteristics and a good example of how foraging is a connection. To be safe and successful, a proper forager must know the Earth he or she is harvesting. There is a thrill in both Kevin and Casey’s voices when they start talking about foraging.

“Part of the excitement for me is realizing all the stuff we can use. It’s a great connection. It’s nice to have availability of things on the grocery store shelf … I mean, I love a good cheeseburger, but spring is coming up, so I know Caltha (Marsh Marigold) is coming up. Then it will be morel season. Then black locust, the flowers are awesome to eat. Then it’s berry season. I’m constantly looking forward to the next thing,” says Kevin.

Expert advice can be found locally through Casey Spacht and Lancaster Farmacy. For information on foraging classes and workshops, visit lancasterfarmacy.com/happenings.

Debbie visited Lancaster several times last year; she presented a program at Landis Valley Farm Museum and helped to put together a foraging-themed pop-up dinner at Commonwealth on Queen in September. Visit her website, wildediblesnjpa.com, to check out her 2018 schedule. 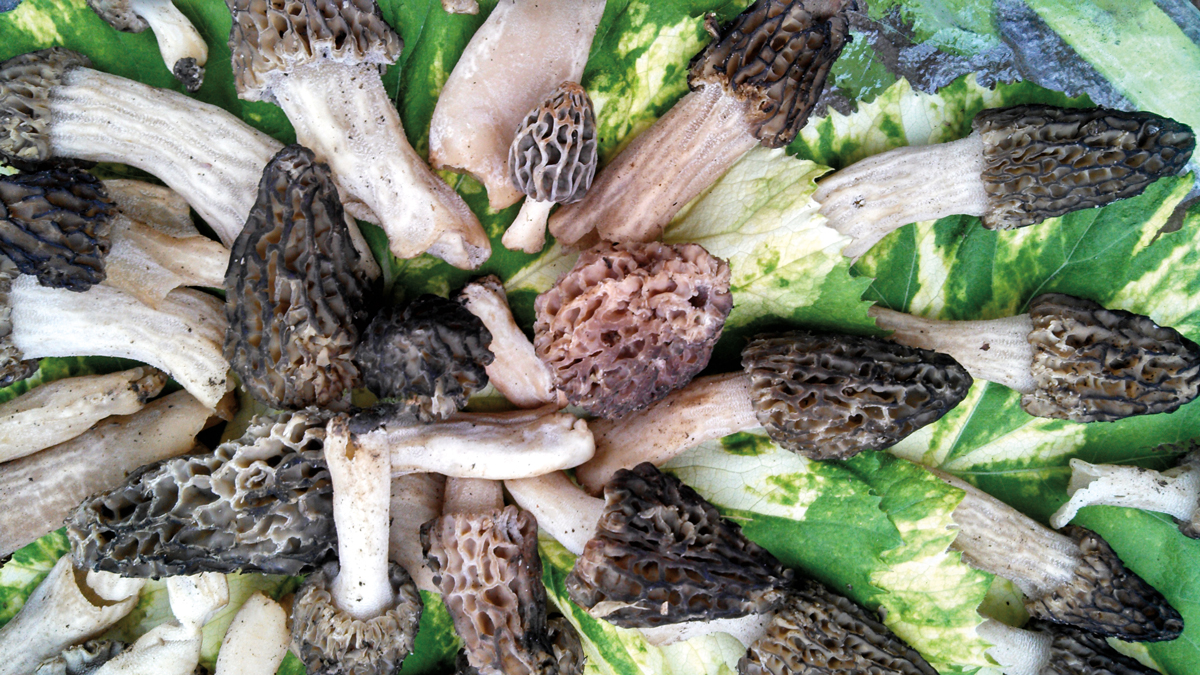