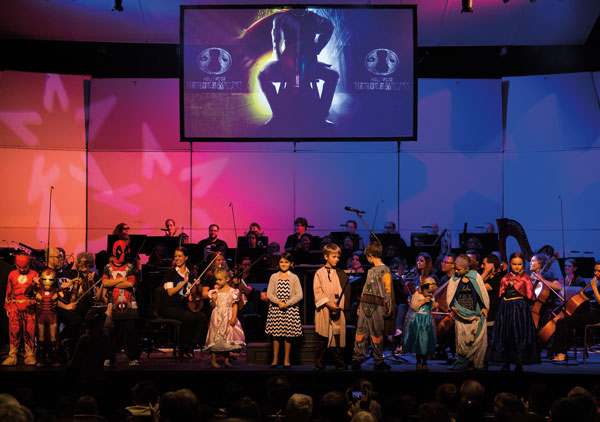 There is a low hum in the air. It’s the sound of bows gliding across strings to make certain they are in tune. It’s followed by the rumble of a pounding bass drum contrasting with the light, airy sound of woodwinds chirping. One last check before everyone takes his or her seat and the Lancaster Symphony Orchestra raises the curtain for another brilliant performance.

Now in the midst of its 69th season, the Lancaster Symphony Orchestra has been under the direction of Maestro Stephen Gunzenhauser for more than three decades. Its official debut dates back to May 1, 1947. On that night, the symphony, directed by Louis Vyner, performed in the McCaskey High School Auditorium. Previous attempts to create a hometown orchestra were thwarted by two world wars and the Great Depression. But on that night, the Lancaster Symphony Orchestra played to a standing ovation.

The 2015-16 season opened in September with Hollywood Heroes and Villains, which served as a tribute to many of our favorite movie scores (the selection ranged from Batman to Star Wars). The very family-friendly event was held at the Winter Center at Millersville University. The musicians received roaring rounds of applause throughout the concert, as did the many pint-sized superheroes – in costume – who kicked off the show with a small parade up to the stage.

The excitement is rising to a “crescendo” – appropriately it’s the theme of the 2015-16 season – as we approach the holidays. There are three performances you will want to attend in December. Holiday Brass: It’s All About the Toys will feature holiday favorites (including Haydn’s Toy Symphony). The date is December 3 at The Ware Center. Harry Potter fans will want to experience Sounds of the Season: Christmas at Hogwarts. The dates are December 18 and 20 at the Barshinger Center for Musical Arts at Franklin & Marshall College. Finally, LSO will end the year/ welcome the New Year with Cirque Musica, through which the music of the symphony meets the theatrics of the circus. The date is December 31 (two shows) at the American Music Theatre.

If you’ve never attended a performance, the holiday season provides the perfect introduction (tickets also make great gifts). It’s a wonderful way to show your support for a local treasure, as they serenade you with their passion for classical music.

Looking ahead, mark your calendars for February 6, when LSO presents The Godfather LIVE! (the orchestra will perform the film’s score as the movie is shown in hi-definition on the big screen at the American Music Theatre). On May 14, brothers Anthony and Will Nunziata will bring their best-selling concert, Broadway Our Way, to the Winter Center. The Classic Concert Series (with guest artists), which is held at the Fulton, continues with Monumental (January 16-17), From Bollywood to Concerto (February 20-21), Mozart Meets the Tango (April 2-3), and American Sampler (May 21-22).

You haven’t experienced Lancaster until you’ve seen and heard these unforgettable musicians.