When Bette Ruby and her friends passed by Champ’s Barber School during First Fridays in Lancaster, she would often say, “I would really like to go there one day!” At her friends’ urging, Bette did just that.

At the age of 67, Bette began collecting Social Security. She contemplated retirement (she had been working for several years at the JCPenney Hair Salon at Park City Center). Working on a part-time basis was also an option. But, she also yearned to satisfy a lifelong dream of becoming a barber. So, she cashed out two 401(k)s, which enabled her to pay the tuition for barber school.

Although Bette had been styling people’s hair since she was nine, her childhood dream was to become a nurse. Her mother even bought her a nurse’s uniform from the JCPenney Catalog one year for Halloween. She remembers wearing the uniform all day long if she could, or at least until her mother would make her take it off. She was determined to become a nurse.

It wasn’t until years later, as a senior in high school, that a guidance counselor changed the future course of her life, observing, “I see you doing everybody’s hair at school. You seem to really love this. You should become a cosmetologist.” Bette remembers reminding the counselor of her desire to become a nurse. The counselor pointed to similarities between the two professions. Both involved a love of people, a skill with scissors and required medical knowledge (after all, barbers were considered the first surgeons).

Bette devoted considerable thought to the proposal and decided to attend Empire Beauty School in Lancaster. Barbering was her first choice, but since she didn’t have a driver’s license at the time (the closest barber school was in Harrisburg), she had to attend a school close to home. Empire fit the bill.

That decision led to a 51-year career as a hairdresser that has taken her to a wide range of salons in the area and brought her much joy both professionally and personally. She’s seen styles come and go: from beehives, bouffants, Afros and the sleek Twiggy look of the ‘60s, to the Farrah Fawcett “feathers” of the ‘70s, the big hair of the ‘80s, the Rachel (Jennifer Aniston) that ruled the ‘90s and the bob that has set the tone for the first decade+ of the 21st century. Many of her clients have been along for the entire ride and now rely on Bette to help them chase away the gray or pump up the volume.

Known for having a big heart, it’s not unusual for clients to walk away with holiday treats and goodies that are disbursed on a year-round basis. And, if a client is lucky enough to be celebrating a 90th birthday, she’ll treat him or her to dinner!

Bette’s desire to become a barber never wavered. She wanted to learn how to cut and style all types of hair. Her school of choice was Champ’s, which draws a diverse clientele. More importantly, Champ’s would offer her the training she had been searching for all these years. She strongly believes that as a hairdresser, you must be willing to continually educate yourself in order to stay current.

“I feel I have met my goal by graduating from Champ’s. Anything I do from now on will be icing on the cake,” Bette confides. “I am blessed for having worked with Champ,” she says of the school’s founder, Champ Hall. “He is a great man – a generous man and truly devoted to mankind.” She is in the process of taking her state boards and should receive her barber’s license as a 70th birthday present. She hopes to work in a barber shop one or two days a week.

Bette continues to work at William Parmer Hair Designers on Harrisburg Pike, where she has worked part time while finishing barber school. Being a cosmetologist and a barber gives Bette the right to tell her clients, “I’m two for the price of one.”  She says every day she looks forward to getting up and coming into work because she loves what she does.
But hairdressing is not Bette’s only talent. She is also on the cutting edge of throwing great parties. She is well known for her summer luaus and Halloween parties. The guest lists now total over 100 (and grow yearly).

A longtime resident of Lancaster, Bette is married to her husband Vincent. Her son Mike teaches art at Mountville Elementary School.

Thanks to her impressive organizational skills, she has been able to maintain a huge “memory box” of pictures that she has taken of special people and events in her life, meticulously kept since high school. Each picture is autographed with a sentiment written to Bette. Someday, she would like to “sit down” and put all these pictures into an album. But, that may be easier said than done for someone who’s been standing (behind a chair) for 51 years – and is still not ready to sit down! 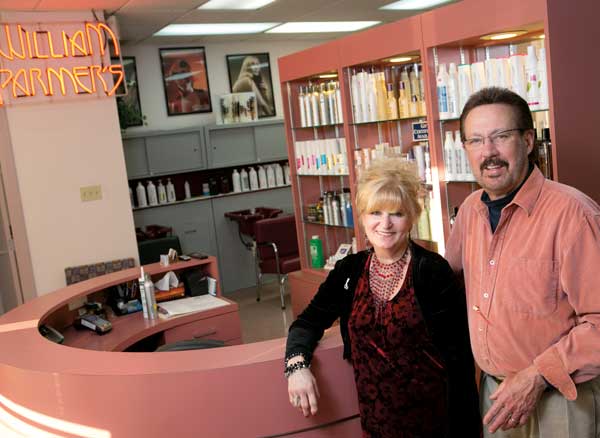 Bette has worked for a wide range of salons throughout Lancaster County over her 51-year career. She’s been at William Parmer Hair Designers for the past year. Bill started his career at Man’s World in downtown Lancaster.