“It was the perfect year for snowmen,” says Tim Arpin, making a tongue-in-cheek reference to last winter’s horrid weather. We’ve returned to the home that was seen on the October 2014 cover so that you can see how Tim seamlessly decorates a residence from one season to the next.
Colleen and mike warren are firm believers in the notion that certain things need to be handled by professionals. So, since building their home in 1991, the Warrens have turned to Bobby Herr and Gary Baer for interior remodeling and River Valley Landscapes for exterior projects. Gardening was another project that definitely required the professional touch. “We have no time and even less ability,” Mike says.
Colleen always admired the seasonal floral and decorating displays she saw at the Hamilton Club and decided to give their creator – Tim Arpin – a call. Tim began collaborating with the couple in the spring of 2013. “He came out and took a ton of pictures,” Mike recalls. When Tim began tossing out plant names, Mike admits his eyes glazed over. “I had no idea what he was talking about and I didn’t pretend I did. We left everything up to him.” 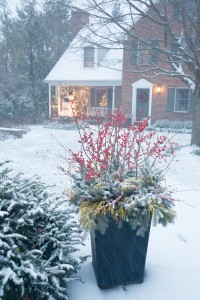 Because the Warrens didn’t want to maintain beds of flowers, Tim decided their property would provide the perfect setting for large container gardens. The containers beautify door entrances, walkways, the front porch and the outdoor-living area that spans the rear of the house. They easily transition from season to season.
last year, as the holidays approached, Tim discussed his winter-décor idea that centered on snowmen with Colleen. Luckily, she shared that she loves snowmen. So, Tim went to work, creating two larger-than-life snowmen out of oak and birch branches, which were then painted and glittered. Their hats and scarves were fashioned from chicken wire that was then densely covered in black and red glitter. Lights were woven in and around the finished snowmen.
The tallest of the snowmen was positioned on the porch, where it sat amidst Douglas fir trees and branches of white birch that were set into containers. The resulting backdrop was embellished with white LED lights, oversized snowflakes, winterberry branches and cardinals. The floor of the porch glistened with super-sized tree ornaments and natural pinecones. The smaller snowman sat atop the pillar where the pumpkin had stood. Both were surrounded by wreaths of black-drago 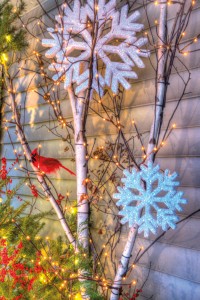 n pine.
Once again, Tim incorporated items the homeowners had purchased, including the metal snowmen they found at Cherry Acres in Lititz and the door wreath he embellished with greens.
The smaller containers were filled with branches of blue spruce, gold cypress and winterberry. “Anything I can grow and use, I do,” Tim says of the plants and trees that grow on his property. Among them are 75 winterberry bushes that, according to Tim, are yielding a “gorgeous crop for 2014.” The larger containers that sat along the side and at the rear of the house were filled with branches of white birch, white pine, Serbian spruce, Douglas fir, cypress and winterberry. “The nice thing about this design is that it’s just not for Christmas,” Tim explains. “It has a winter theme that could remain in place through February.”
Tim, who launched The Gilded Lily 25 years ago, began decorating clients’ homes – inside and out – in 1993. Business has grown to the point where he and his staff work seven days a week from early November right up to Christmas. “This year, we started doing exteriors in late October and interiors the first week of November,” Tim says of his schedule, noting that he planned to be halfway done by Thanksgiving. He takes pride in the fact that no two projects are the same: every year promises something new and different for each and every client. The Warrens appreciate the approach Tim takes. “We love the element of surprise,” Colleen says of arriving home to see the finished design for the first time.
However, there’s no rest for the weary. Once January rolls around, Tim’s schedule does an about-face and he’s kept busy removing what he’s installed. In mid-February, he transforms the Hamilton Club into a winter wonderland in support of LancasterHistory.org’s annual benefit that coincides with Valentine’s Day. Then, it’s time to think about spring and the whole process begins anew. 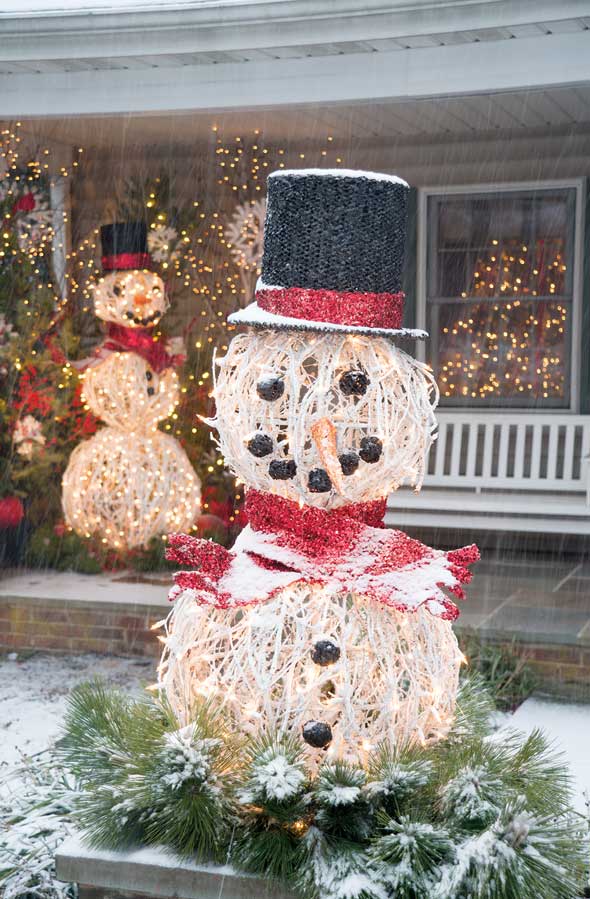