Earlier this year, the Lily Pulitzer Collection crashed Target’s website and sold out in stores within hours. Another Palm Beach style statement from the 60s has also staged a comeback: Dodie Thayer’s Lettuce Ware is once again gracing tables thanks to fashion designer Tory Burch.

Thayer launched her wildly popular pottery in the early 60s. The artist stopped by a craft shop that was closing its doors and upon spying a kiln, made an offer. Hoping to duplicate the look of European pottery, she began experimenting. Initially using grape leaves set into clay molds to create small plates, Thayer wanted more definition and began substituting lettuce and cabbage leaves. Shops around Palm Beach began selling what came to be known as Lettuce Ware. Thayer became known as the “Pottery Queen of Palm Beach.”

The publicity in food and home-design magazines generated a legion of fans that included Brook Astor, the Duchess of Windsor, Frank Sinatra, C.Z. Guest and Jacqueline Kennedy. Refusing to go the mass-marketing route, Thayer created each and every piece herself. The wait list for her signature soup tureens grew to three (or more) years.

Thayer retired in the 80s, which only added to the allure of her pieces at auctions, estate sales and eventually online sites. Jacqueline Kennedy’s 10-piece collection sold for $3,450 in 1996, while Mrs. Astor’s 218-piece collection later sold at Sotheby’s for $75,000. In May, four luncheon plates were offered on eBay for $1,450. Those signature tureens now command as much as $7,000.

Tory Burch, an avid collector, met with Thayer in 2013, at which time she proposed they collaborate on reintroducing Lettuce Ware to a new generation of hostesses. Again, the distinctive green dinnerware was heralded by food and home publications. To see it, visit toryburch.com or the Tory Burch store at King of Prussia. And, if you happen to spy Lettuce Ware in your mother or grandmother’s china cabinets (or attics), put your dibs on it! And, keep your eyes peeled in Adamstown. 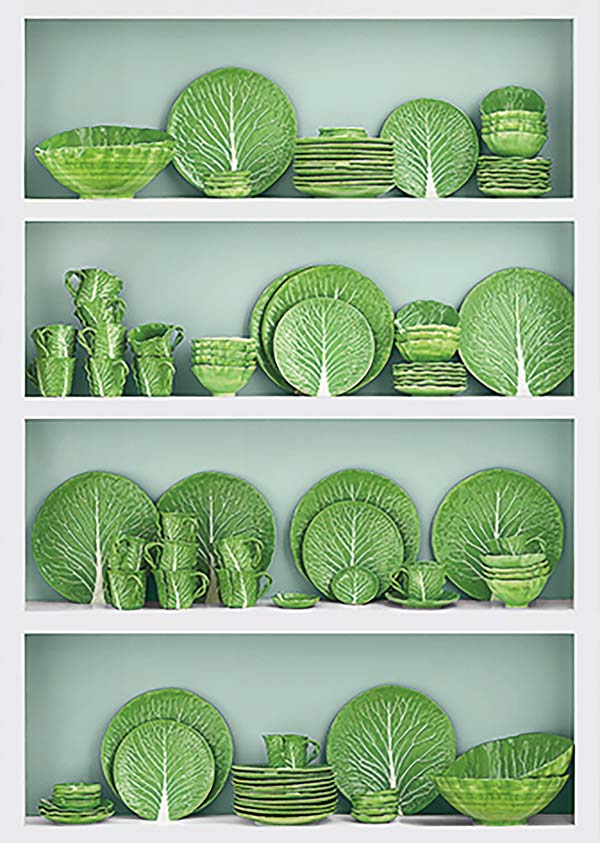