The above motto that appears on signage, pillows, glassware and other home décor items perfectly sums up what homeowners discovered during the Victorian era and what their modern-day counterparts are rediscovering – a porch is the perfect place to relax and sip a glass of lemonade – or wine, in the case of Karen and Mark Haldeman – on a summer evening. 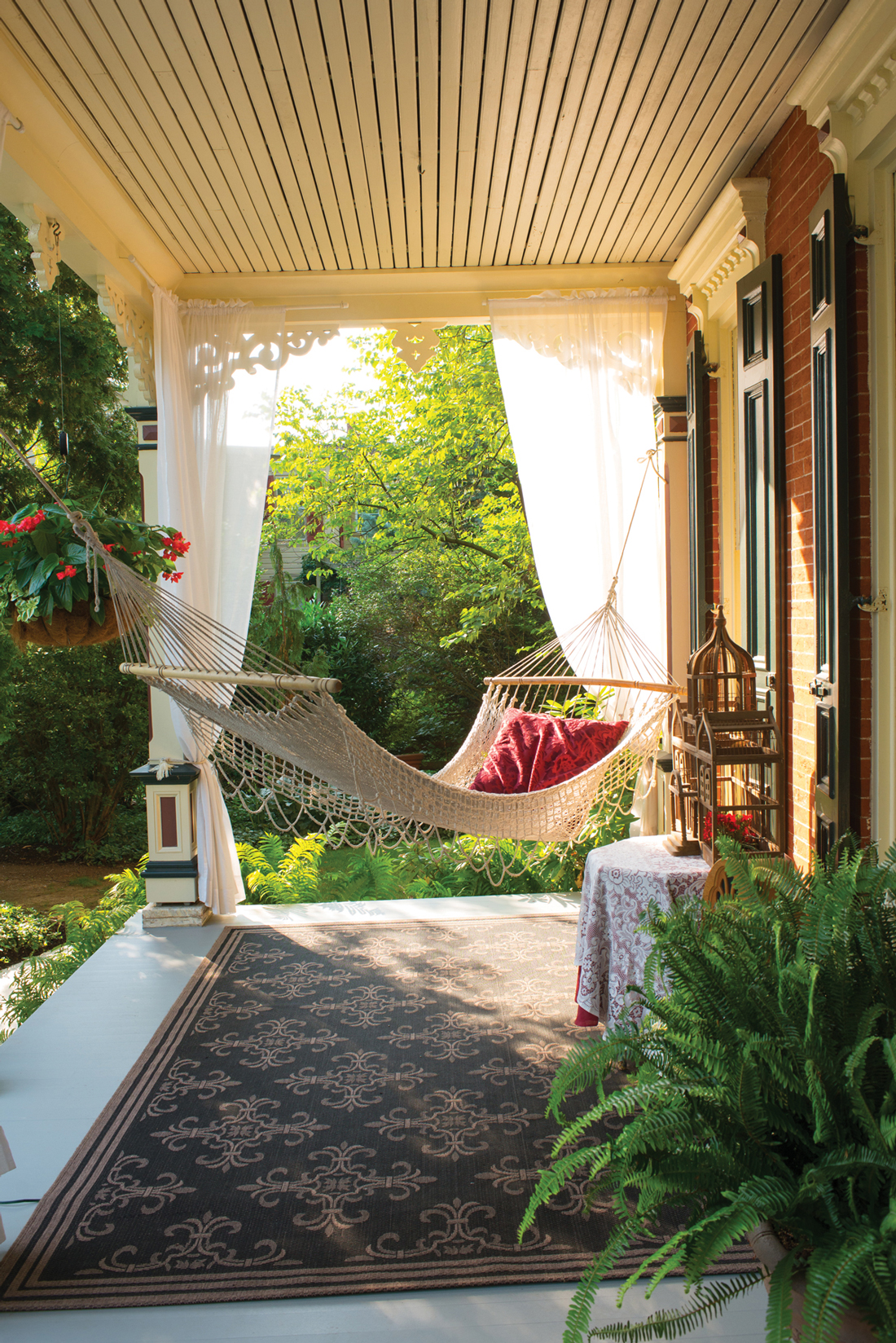 Karen Haldeman is always on the lookout for decorative items for her porch. During the spring and summer months, it is furnished with a hammock, wicker chairs and tables that hold birdcages and vases of flowers. Hanging baskets and containers filled with ferns and other plants echo the popularity of greenery during the Victorian era. Karen’s mother-in-law made the draperies that encircle the porch.

Porches are back in vogue. During a marathon viewing of HGTV’s Home Town, which is based in Laurel, Mississippi, it was evident that porches are the deal makers for clients working with home renovators Ben and Erin Napier. In towns across the South – notably historic places such as Charleston, Savannah and New Orleans – porch parties have reentered the lexicon of entertaining. Because of the manner in which they are decorated, porch tours have become a new fundraising tool for nonprofit organizations. Locally, Mount Gretna’s famous porches are a prime attraction for the annual August home tour that benefits Music at Gretna. In Lititz, the annual Artisan’s Porchwalk transforms porches into mini-sized art galleries each October. At the other end of the spectrum – new construction – the popularity of farmhouse design is helping to revive interest in porches. 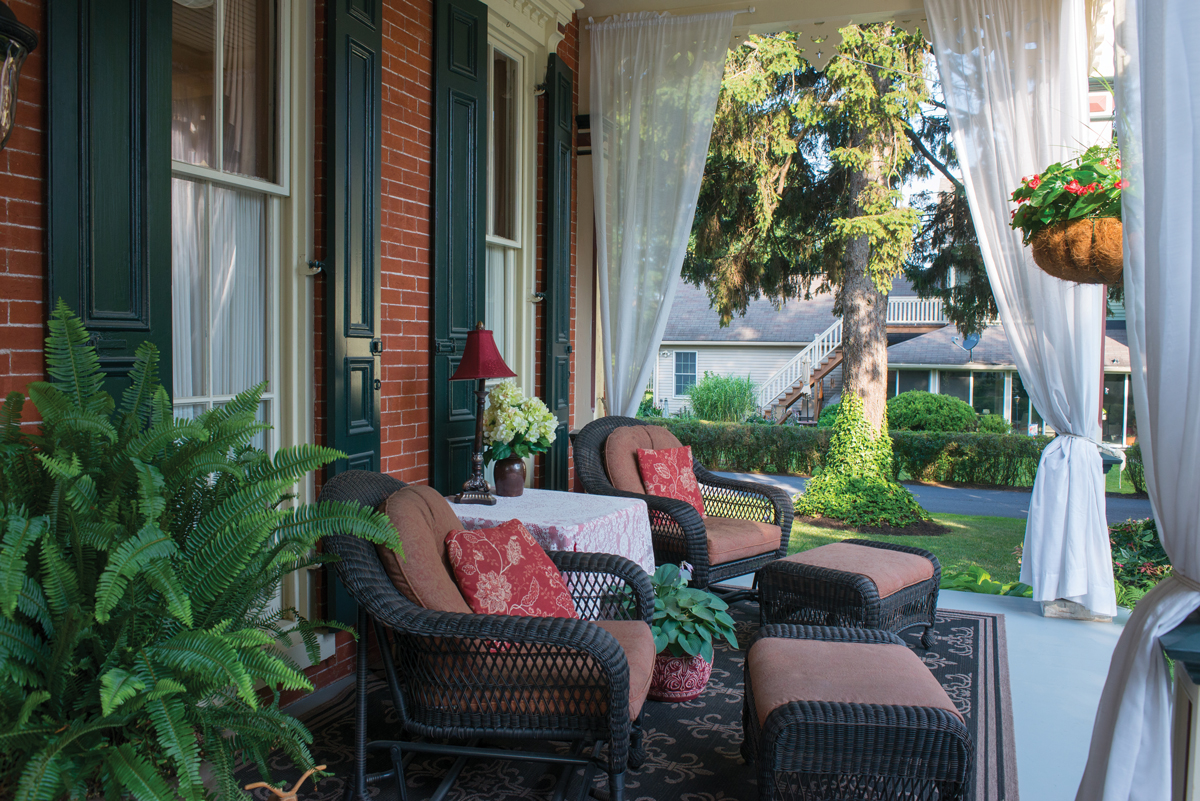 Porches are synonymous with the Victorian era. With the exception of the South, few homes in America had porches prior to the 1850s. However, during the second half of the 19th century, an interest in landscaping, an awareness of the healthy benefits of fresh air and the increasing availability of mass-produced millwork prompted an interest in what was called a “rocking-chair porch.”

The porch, whose heyday extended into the 1920s, served many purposes. It was a place to escape summer’s stifling heat. It was a place to relax with family and friends. A porch fostered a sense of being a part of a neighborhood. It became a place to entertain. It provided curb appeal. A porch was a place to dabble with the newest Victorian obsession – houseplants. With that said, a porch verifies that the more things change, the more they stay the same.

A Victorian in Landisville

The Haldemans’ home, which sits along Main Street in Landisville and dates to 1875, is one of the town’s best-known properties. While the house has been impeccably restored and the grounds artfully landscaped, your eye is nonetheless drawn to the porch that spans the front of the house and is decorated to reflect the seasons and holidays that mark the calendar. 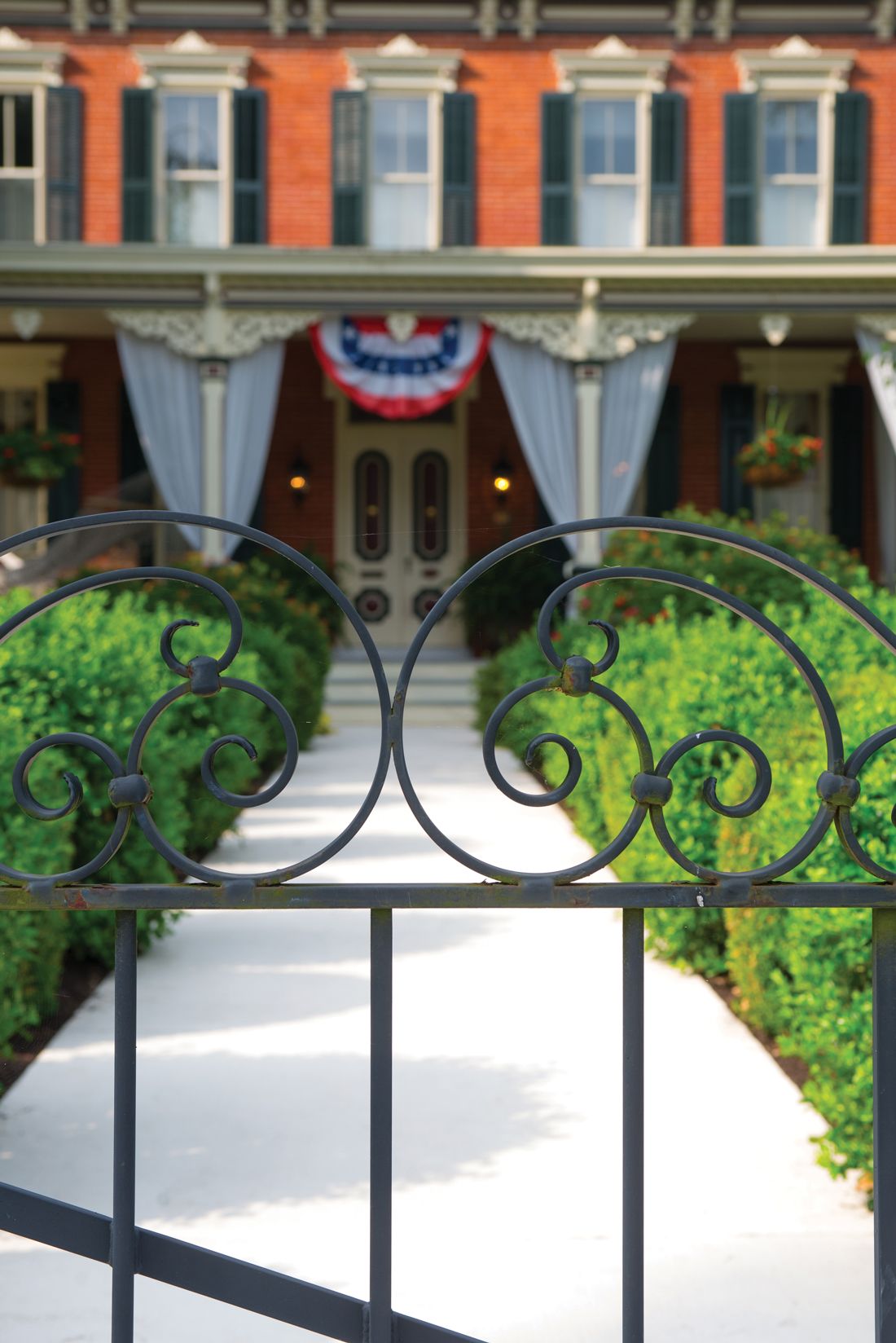 Jeremy Stief and Kauffman Iron Works in Manheim, designed and crafted the entry gate and fencing that fronts the property.

Karen, who oversees Galebach’s Floor Finishing, credits her previous career – 17 years as a floral designer with Royer’s Flowers & Gifts – for her creativity. “I’m always looking for things to put on the porch,” she says.

In the summer, the scene is set with patriotic bunting, a large American flag, wicker furniture, airy curtains, birdcages, containers of ferns and a lace-trimmed hammock. In the fall, the porch glows with pumpkins and Halloween fare. Last year, one of the trees in the front yard was hung with large, bronze-hued ornaments. As soon as Thanksgiving arrives, trees and an antique sleigh transform the porch into a holiday vignette.

The property looked far different when Karen and her late husband, John Galebach, purchased it in 1996. “It was condemned,” she explains. “We bought it from the bank.” A tour of the house revealed why it had fallen into a state of disrepair – animals and birds were living inside the house, graffiti covered the walls, while bottles and cans carpeted the floors (it had become a local “party house”). The roof was greatly compromised, which allowed the elements to penetrate the interior of the house. “We found a kiddie pool in the rafters that was being used to catch the water,” Karen says. Outdoors, trees and shrubbery were so overgrown that they were encroaching on the house. 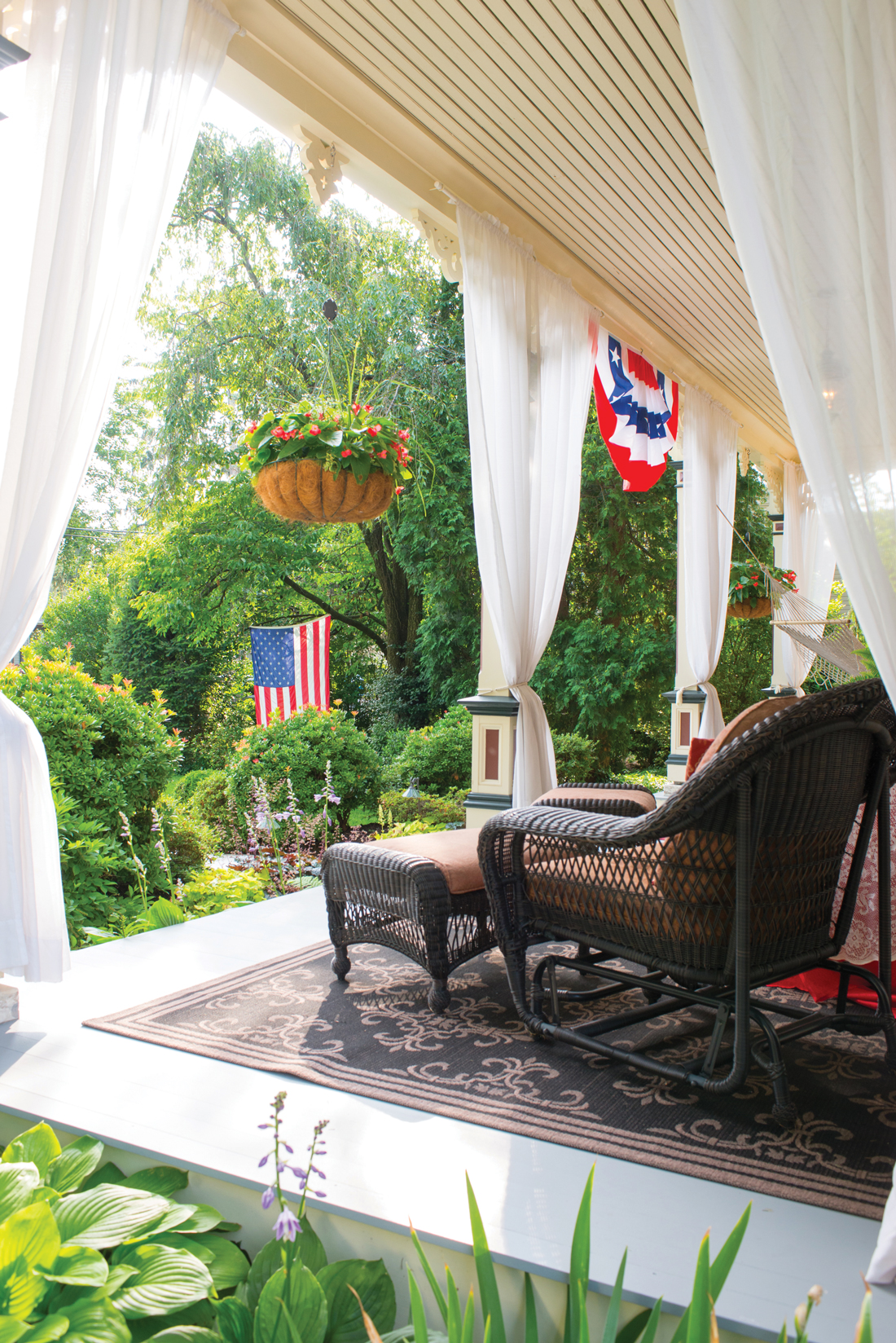 During the spring and summer, bunting and a large American flag provide the porch with a patriotic theme.

Despite the horror story the house had become, Karen had fond memories of it. “I grew up in Landisville,” she explains. “One of my friends lived in the house, so I played there a lot. I always loved it.”

The house has an interesting story attached to it, as well. Known locally as “The Spite House,” it was built by John Hiestand after he retired from farming at the age of 70. Unfortunately, Mr. Hiestand passed away before it could be finished.

A man named Simon Hershey – Karen believes he was related to Milton Hershey – then bought the house with the intention of finishing it and making it a home for himself and the woman he was courting. 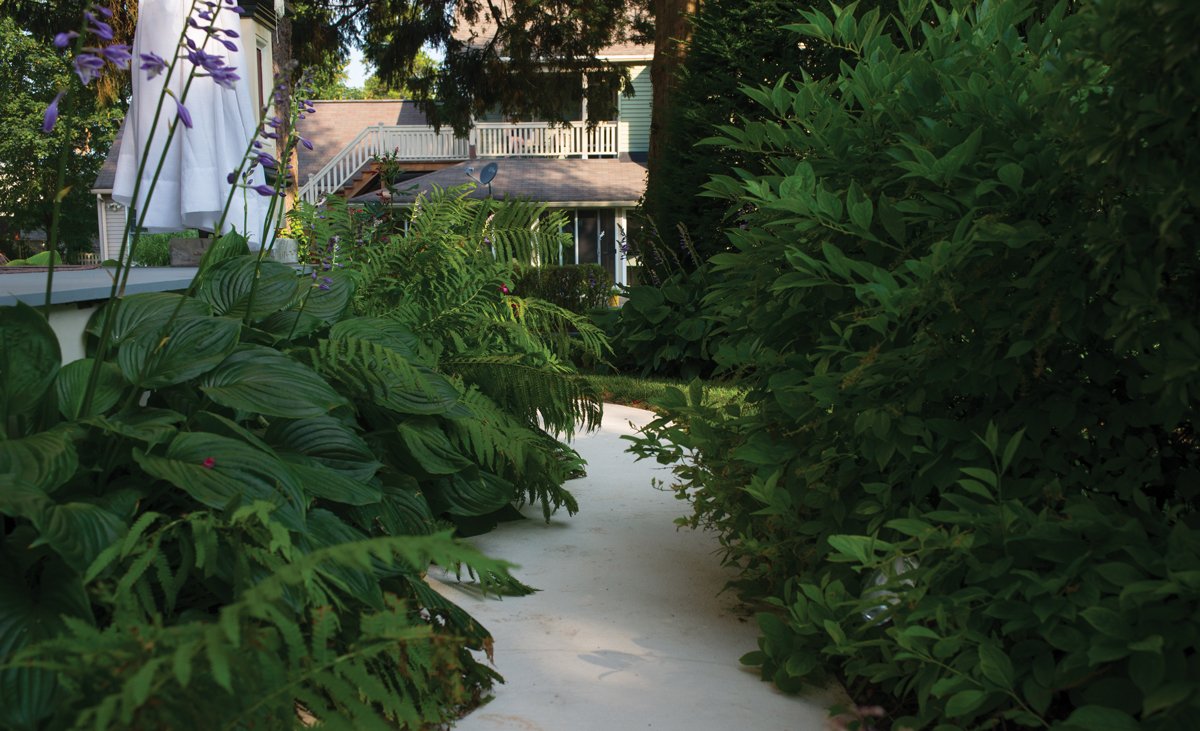 The Haldemans worked with John’s Quality Landscaping to surround the porch with ferns, hosta and other plants. Karen believes the ferns are original to the property.

To Hershey’s dismay, she turned down his marriage proposal. A la The Notebook, Hershey vowed to create the most elaborate house in the area. He also went on to marry another woman. “Hence, The Spite House,” Karen says.

Later, ownership of the house was passed to the Church of God of Landisville. “The plan was for it to become a retirement home for missionaries,” she says, adding the plan never materialized. “There’s a lot of history here,” she remarks. 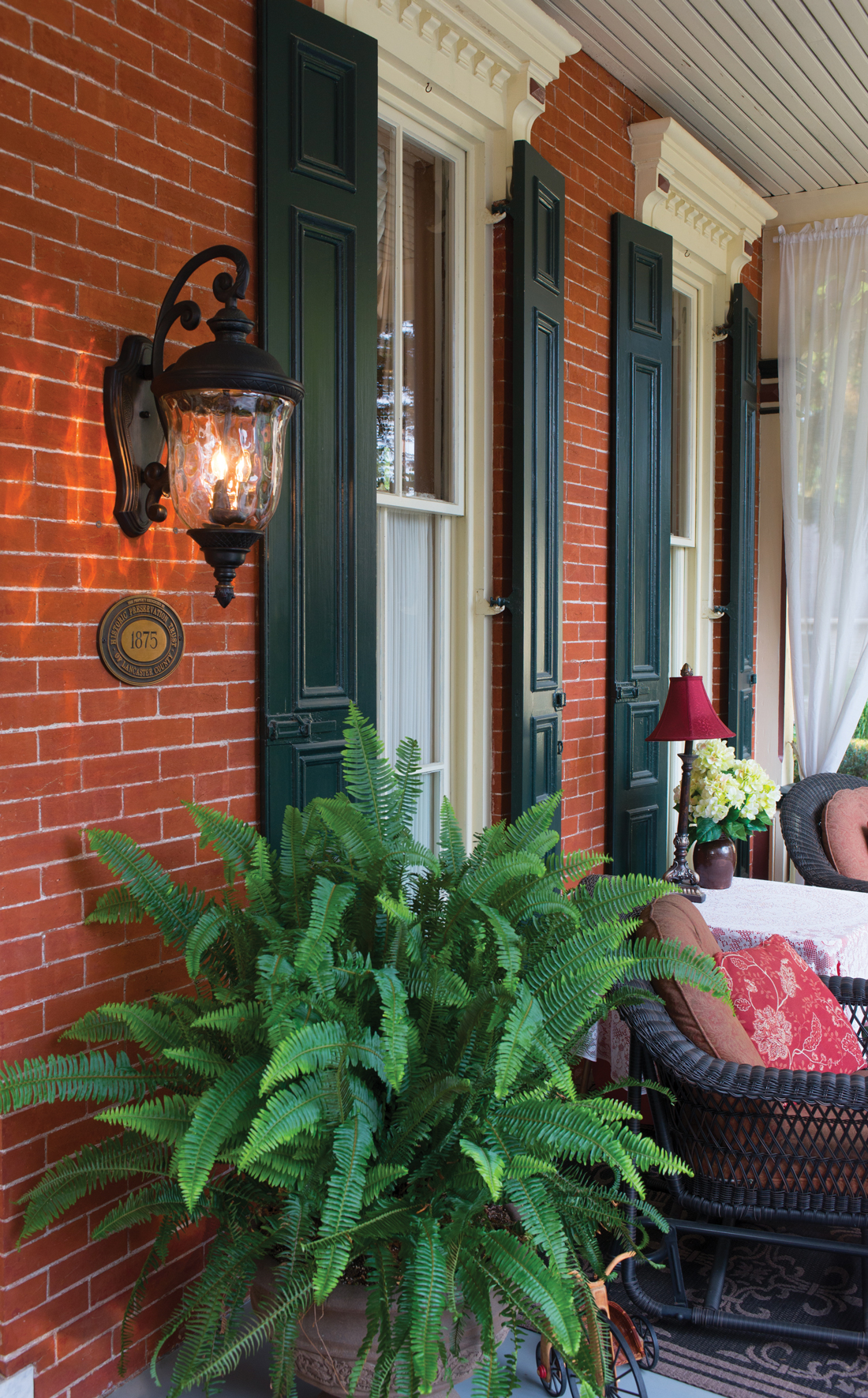 Built in 1875, the house is listed on the Historic Preservation Trust of Lancaster County’s register of historic properties.

Before they could even begin to restore the house, Karen and John had to let it dry out. “That took a year. Everything was wet from top to bottom,” she notes. Once work could commence, she recalls having “to beg our contractor friends to work on the house.”

The porch had its own issues. “It was rotted,” she says. “Everything had to be replaced. Part of the problem is it gets all the weather. In fact, we had to replace it again last year.” 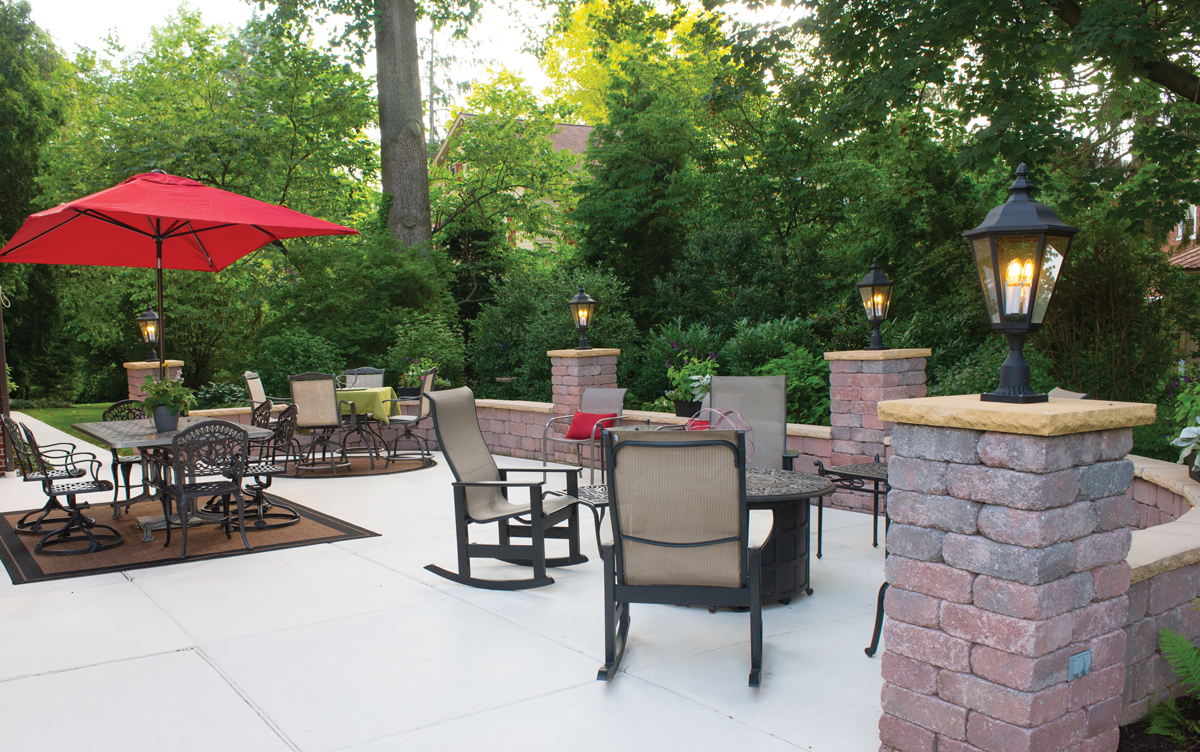 Trees and a grape arbor that Karen says provided the neighborhood rodents with treats, were removed in order to create a large outdoor-living area in the side yard. The patio merges with the back porch and second-floor balcony to create a multifunctional space.

Once it was completed, the porch took on a life of its own. “We do use it,” Karen remarks, noting that it’s perfect for everything from entertaining to just relaxing with a glass of wine at the end of the day. It’s become a favorite Trick-or-Treat stop at Halloween as well as a much-utilized backdrop for holiday portraits because of the large antique sleigh that decorates the porch. “People think we’re a B&B and will just walk up and check out the porch,” Karen adds.

Sadly, John Galebach died shortly after the renovation work was completed. Karen and Mark, who heads Haldeman Mechanical, have been married since 2001. Together, they’ve worked on several projects, including restoration work following a fire in 2005 and designing a wine cellar. 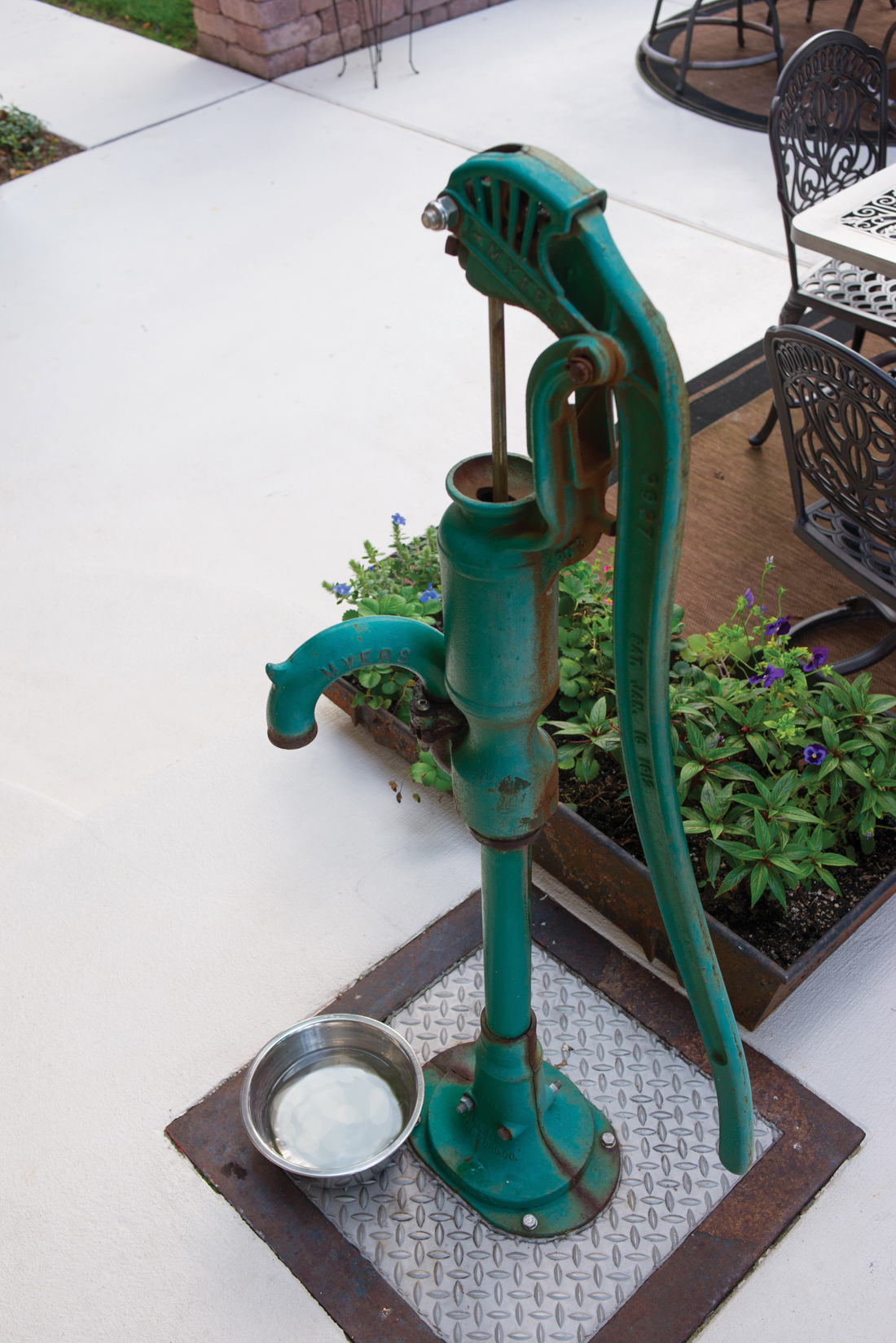 Jeremy Stief also restored the pump that once serviced the hand-dug well. “It was in pieces,” Karen says. Now, it’s handy for filling the dog’s bowl with water and for watering plants.

They also transformed the side yard into a spacious outdoor-living area. Removing trees and a grape arbor opened up the area and helped to unite the new patio with the house’s back porch and balcony. “We’re out there a lot,” Karen says of the space that’s now used for entertaining, relaxing and even watching television. 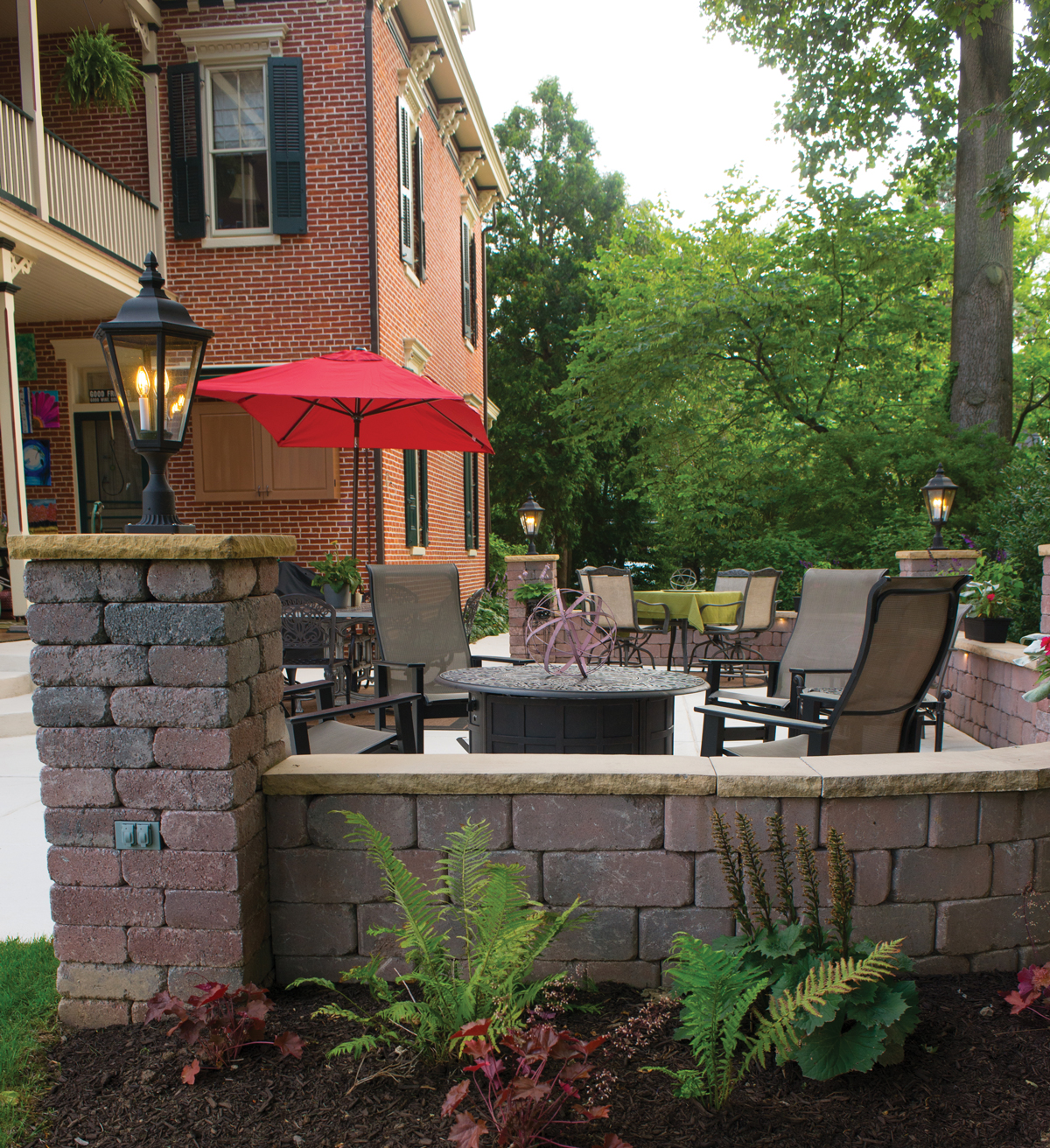 Now that they are completely finished – “You can’t say that about an old house very often,” Karen notes – the Haldemans are contemplating downsizing. They’ve signed on the dotted line for a residence in Pleasant View Communities’ The Lofts at Lititz Springs. This will probably be their last summer at the house. “I’m hoping whoever buys our house will want to keep some of its treasures,” she says.

While she’ll have to bid farewell to her porch, Karen is excited by the prospect of adding her creative touch to the balcony her new home will have. 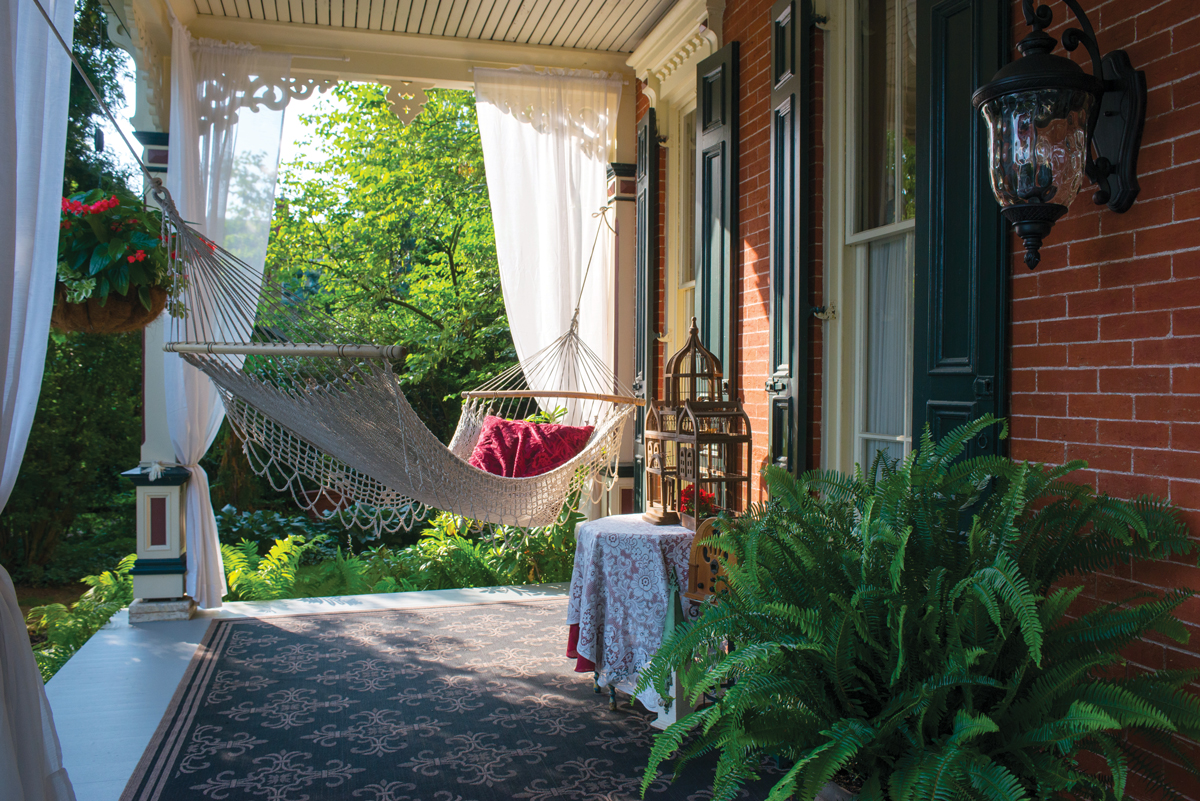