There are houses across Lancaster County that are must-sees at holiday time due to the elaborate light displays that often include elements such as inflatables, computer animation and synchronized music. One such destination is the home of Dennis and Theresa Cross in Lititz. 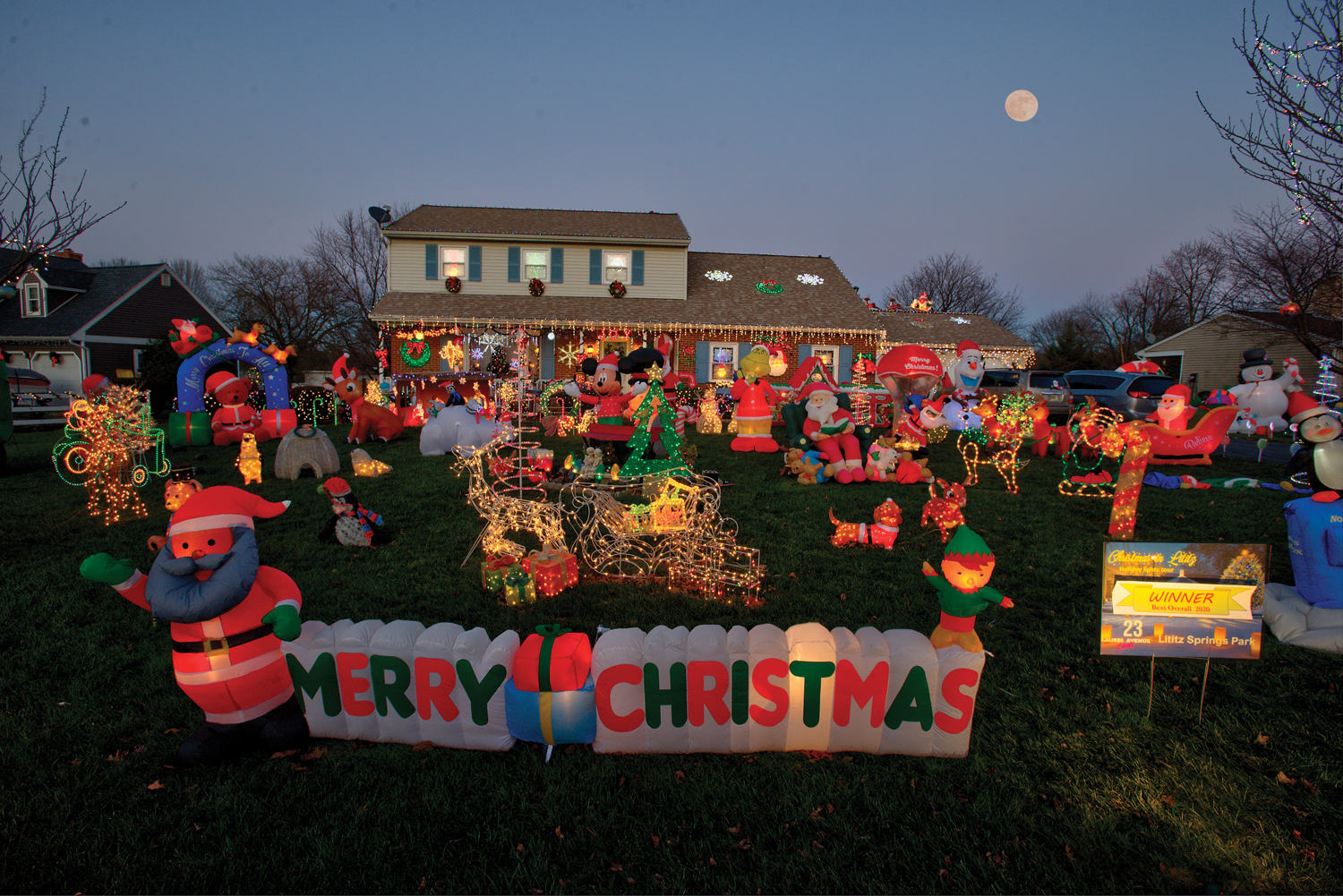 The home of Theresa and Dennis Cross garnered the most votes for “Best Overall” display from the public and was declared the winner of Lititz’s first Holiday Home Decorating Contest in 2020. The contest is open to residents of the 17543 zip code.

The Crosses are native New Yorkers who followed Theresa’s mother to Lancaster County after Dennis retired from the New York Police Department in 1994. “We visited Lancaster a lot and just loved it,” Dennis says. The wide-open expanse that defined their new yard in suburbia allowed them to indulge in their love for decorating … not only for Christmas but for all the holidays. “In New York, we lived in the Glendale section of Queens,” Dennis explains. “We didn’t have much of a front yard and couldn’t decorate too much.”

When the couple moved to their home in Lititz in 1995, they became regulars at Builders Square, a big-box home store that was located along the Fruitville Pike. They began buying decorations – ranging from lights to inflatables – for not only Christmas but for Halloween, July 4th, Easter, Memorial Day and Thanksgiving. “Thanksgiving is a little hard to find,” Dennis notes. Of course, the main events are Halloween and Christmas. “Last year we didn’t do Halloween because of Covid and the uncertainty about trick-or-treating,” Dennis explains. “Boy, did we hear it! People wanted to know why we weren’t decorated!”

For the Crosses, prepping for Christmas starts in early October. That’s when Theresa, who works for the Warwick School District, starts checking every string of lights for outages. “She works and works until she finds the bad bulb in a string,” Dennis says. Her least favorite chore is finding the bad bulbs in the light globes that hang in the trees. “My fingers get wrecked working with those,” she reports. As the weeks pass by, the family room becomes filled with lights, extension cords and other necessities that are brought down from the storage space over the garage. 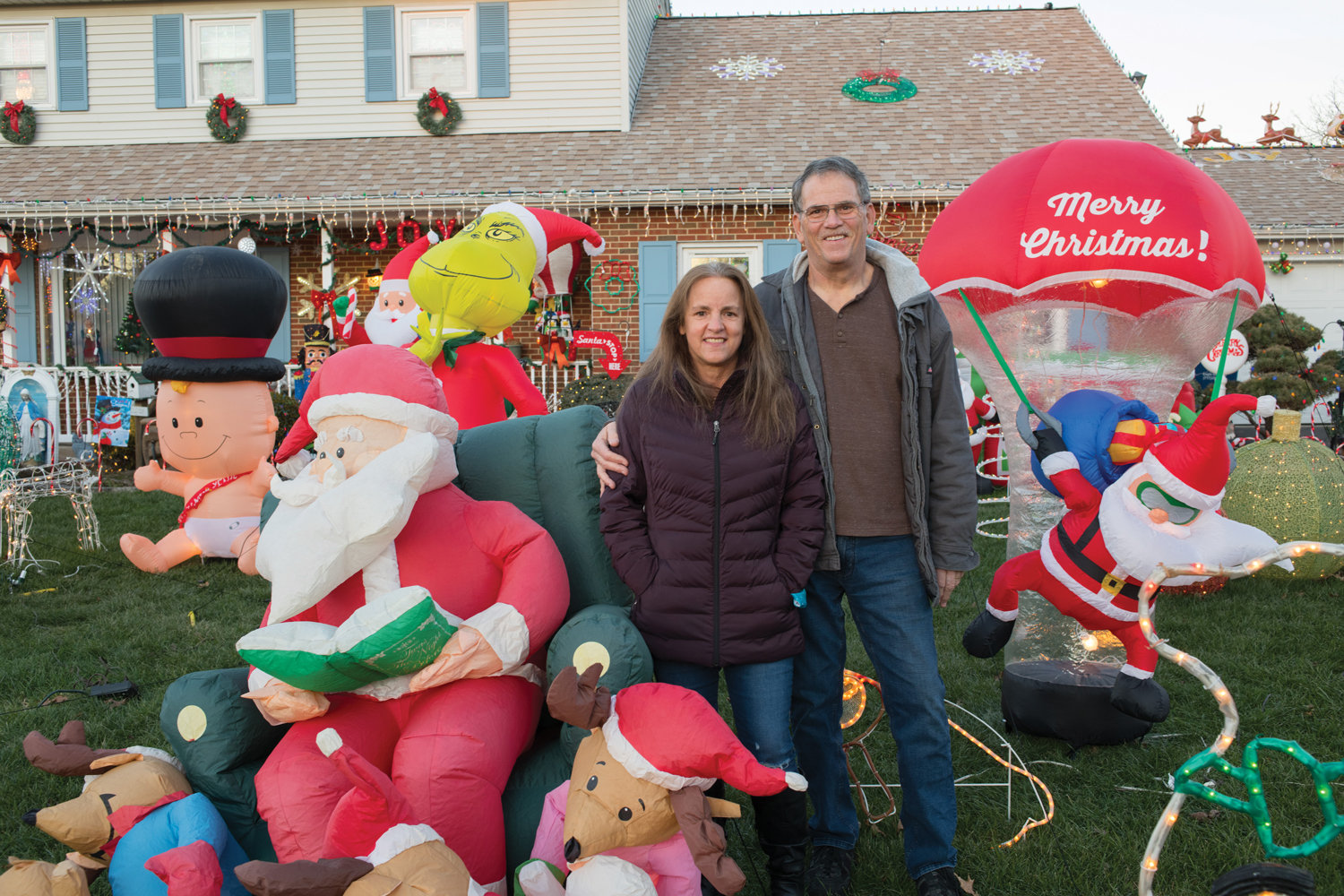 The Crosses, who launched their collection of inflatables in 1995, love all the holidays. Their home continues to be the gathering place for holiday dinners that include their four daughters and their husbands and nine grandchildren (another is on the way). “We all live within a mile or so of each other,” Theresa says.

“It’s a lot of work but we know how much it means to people,” Theresa says. Because three of their four daughters are nurses at Lancaster General Hospital and the other works in dentistry, the Crosses are keenly aware of the impact the last 21 months have had on people. “If this helps to make people happy, we’re glad to be able to do it,” she says. “It’s rewarding to have people enjoy it. If we can make people happy for just a month, it’s worth it.”

After 25 years, the Crosses have their decorating routine down to a science. While Theresa takes charge of checking the lights, Dennis goes over the inflatables and other large decorations. “They just don’t make ’em like they used to,” he says. “The fabric is thinner, the strings are flimsy and the stakes are lighter.” He keeps his Builders Square purchases in working order with the help of a welder who fine tunes them each year. As a result, recycling has become part of the process – anything that is beyond repair is stripped of its reusable elements. “I have buckets of stakes stocked away,” he notes.

Halloween is dismantled on November 1 and by November 9, the trees are being strung with lights and a friend arrives to assist Dennis with installing lights on the highest rooftop. Theresa assumes the job of lining the lower rooflines with lights. Dennis, meanwhile, uses a rebar to create deep holes along the drive and walkways to ensure that the decorations that line them won’t become dislodged. As Thanksgiving Eve – the night of the big reveal – approaches, the inflatables take their place on the lawn. “Except for the New Year’s baby – he comes out after Christmas,” Dennis says. 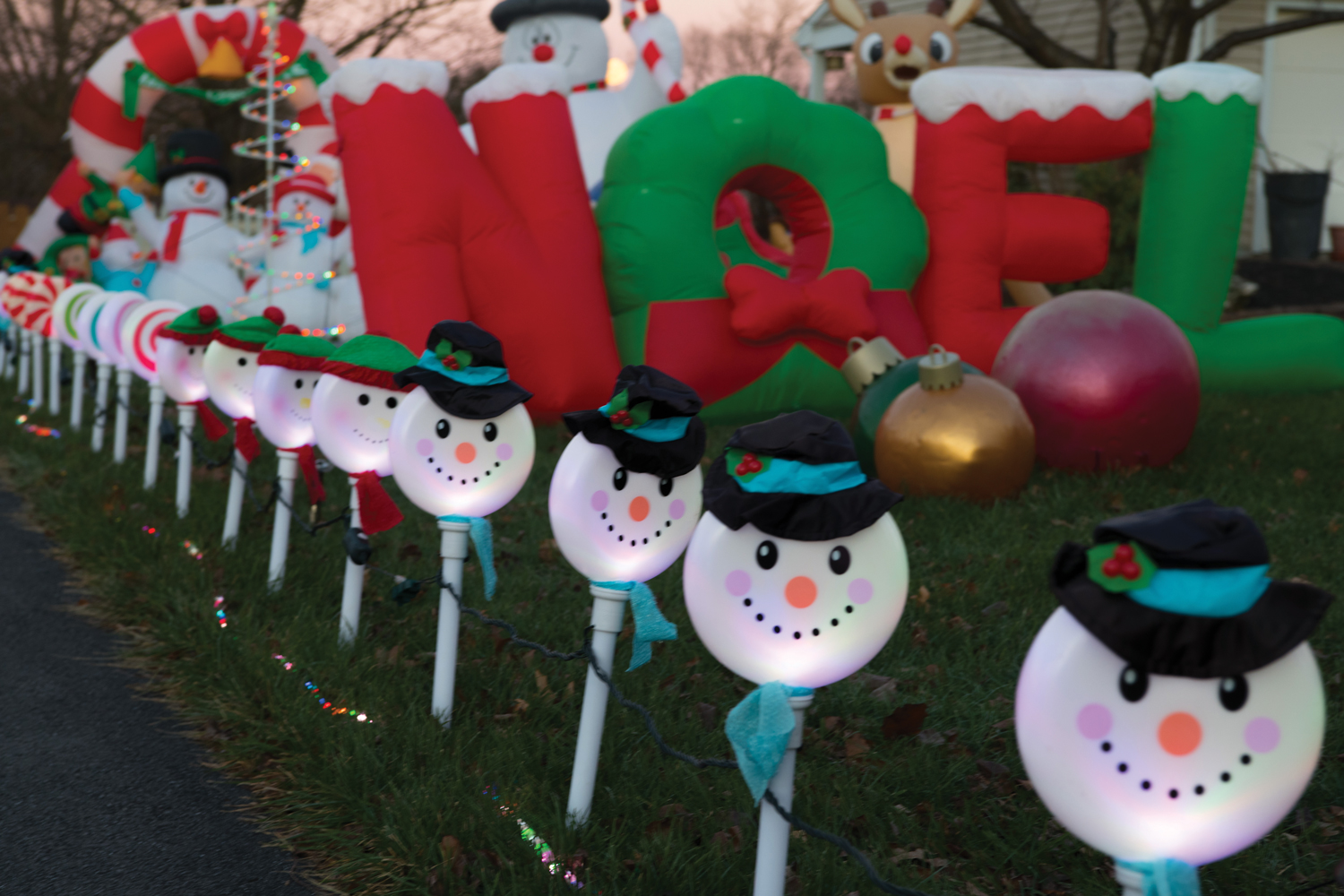 Dennis uses a rebar to create deep holes that ensure decorations – such as the snowmen that line the driveway – don’t become dislodged.

To make the lighting process go smoothly – and not overload the electric system – the Crosses have installed outlets throughout the front yard. “Outlets are at every tree and along the driveway,” Dennis points out. “In the early days, we couldn’t use electrical devices – such as hairdryers –
inside the house when the lights were on,” Theresa recalls of having fuses blow. Such calamities led to the installation of a new electrical box and a new electric meter (courtesy of PPL). Seven switches were added beside the front door that allow the lights to be easily controlled from inside the house. “It’s easier to switch them on,” Dennis says. “We’ve probably bought millions of timers over the years.”

If you’re wondering about the electric bill, it’s not as bad as one might assume. “The LED lights have really helped bring the cost down,” Dennis says. They’ve also learned to become thrifty shoppers. “I now know when stores put things on sale,” Dennis reports. “Each one has a different schedule.” He’ll also track things down online and then drive to the stores where they are in stock. “I like to be able to look things over,” he says. Theresa does her part by perusing garage sales for finds. “You’d be surprised by what you find,” she says.

The two admit that they don’t know how much longer they can physically handle the work of decorating to the extent they do. Both of them postponed surgeries in order to decorate for the 2021 holidays. “People will get the message when we decide to stop,” says Dennis. “I’m thinking the year we call it quits, we’ll only put up a grinch inflatable in the front yard.” 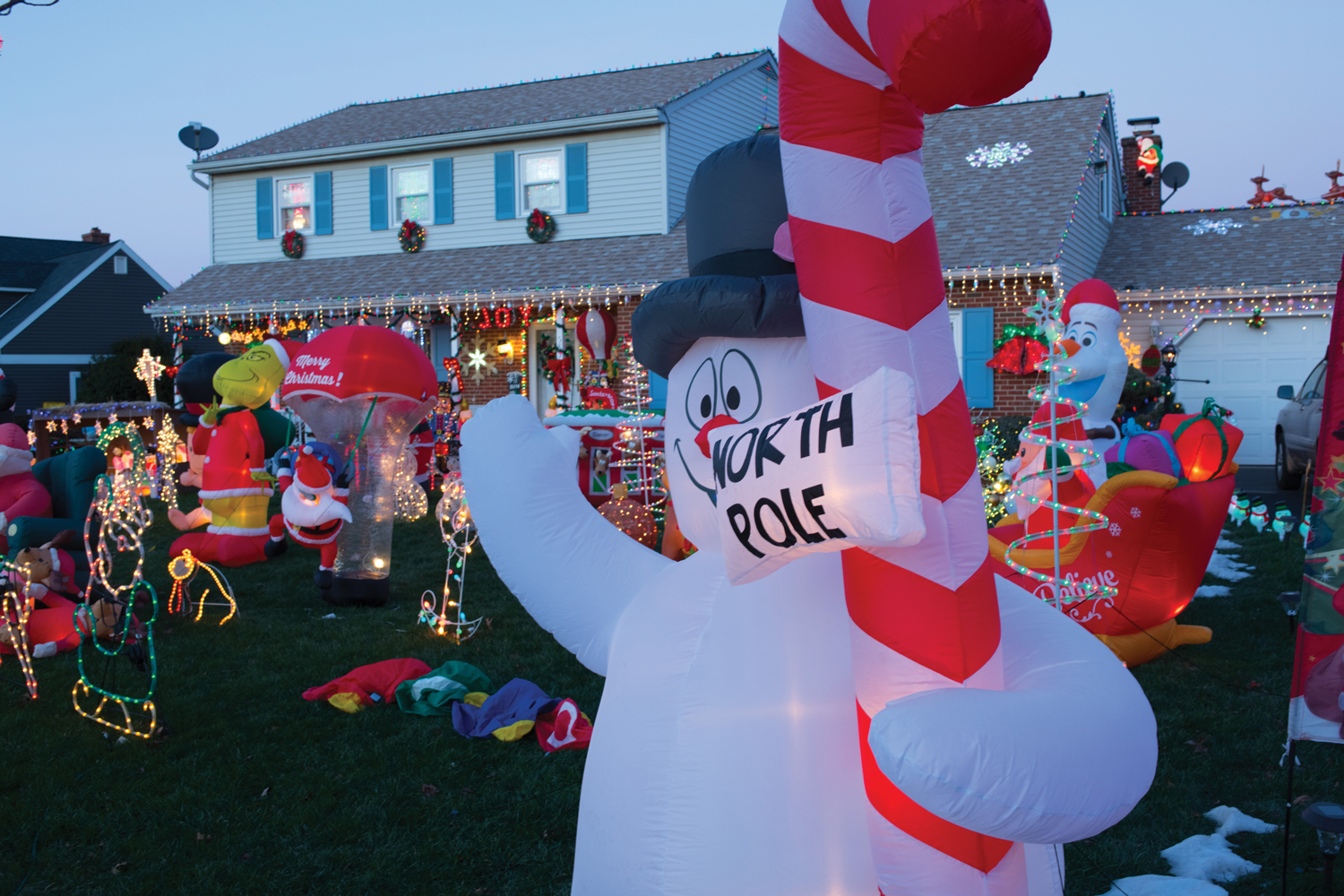 For the time being, they will continue to welcome those who love to take in lights at holiday time to come by their award-winning display. That honor came last year, when a home decorating contest that was sponsored by Lititz Springs Park and hosted by Laurel Avenue Lights (see sidebar) was held in the 17543 zip code area. Of the more than 1,000 votes that were submitted for “Best Overall” display, the Crosses’ home garnered more than one-quarter of them.

“They’re doing the contest again this year and when Rich [Motz] invited us to participate, I declined, telling him to give someone else the chance,” Dennis says.  While the Crosses’ home won’t be part of the contest, it will be part of the tour. “It’s fun to watch the people come by,” Theresa says. “All the retirement communities in the area bring their residents by,” adds Dennis. “And, the priest [at St. James in Lititz] always reminds people, ‘Don’t forget to see the lights.’” 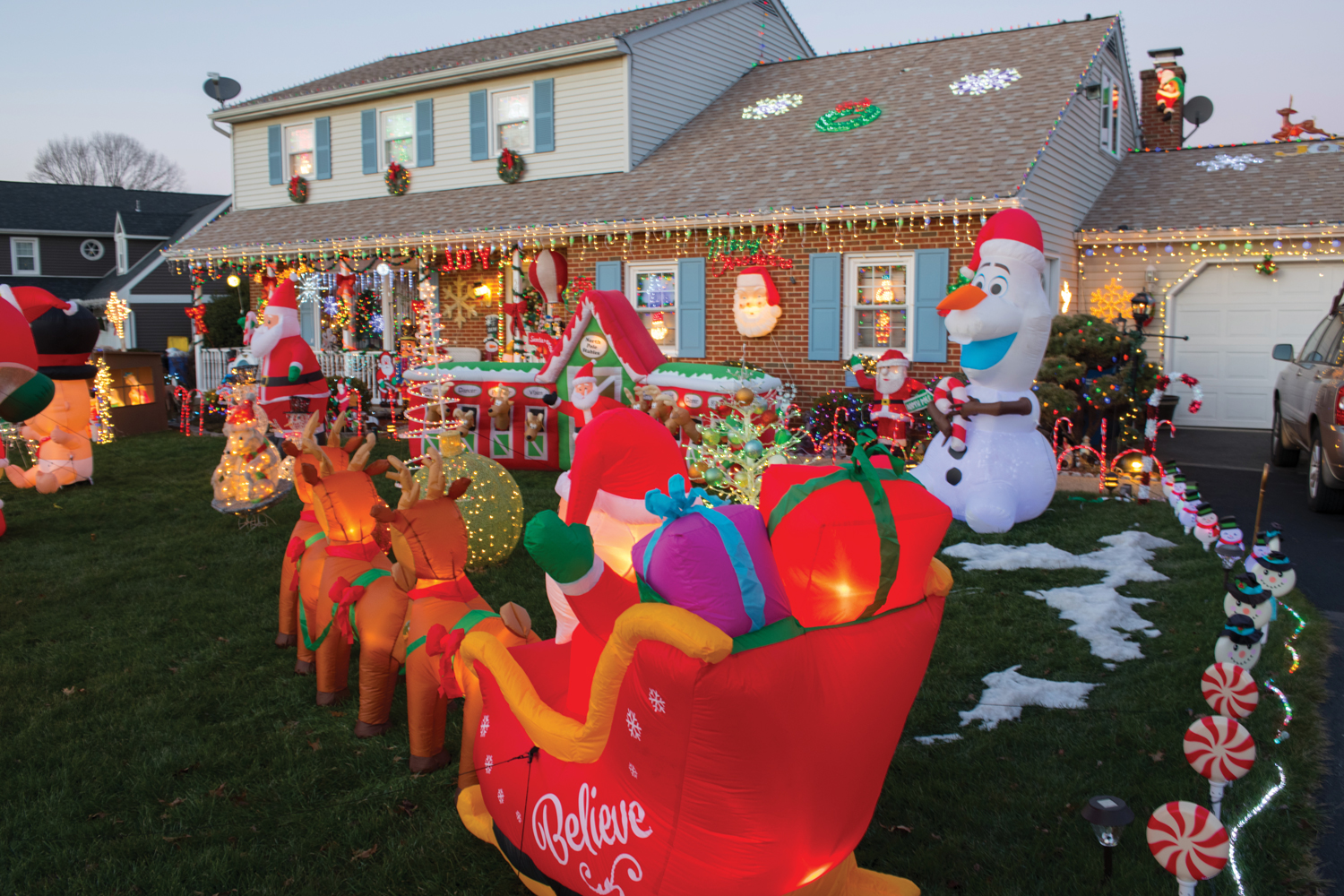 Fans of lighting displays are welcome to visit the Crosses’ display at 583 Crosswinds Drive in Lititz. The display will be on view from November 24 through January 1. Hours are 6-10 p.m.

Another Lititz home has been a show-stopper for the last decade. Now referred to as Laurel Avenue Lights, the endeavor of the Motz family has taken on a life of its own, as it’s become a fundraiser for community efforts and serves as host of the Holiday Home Decorating Contest that is open to residents of the 17543 zip code. 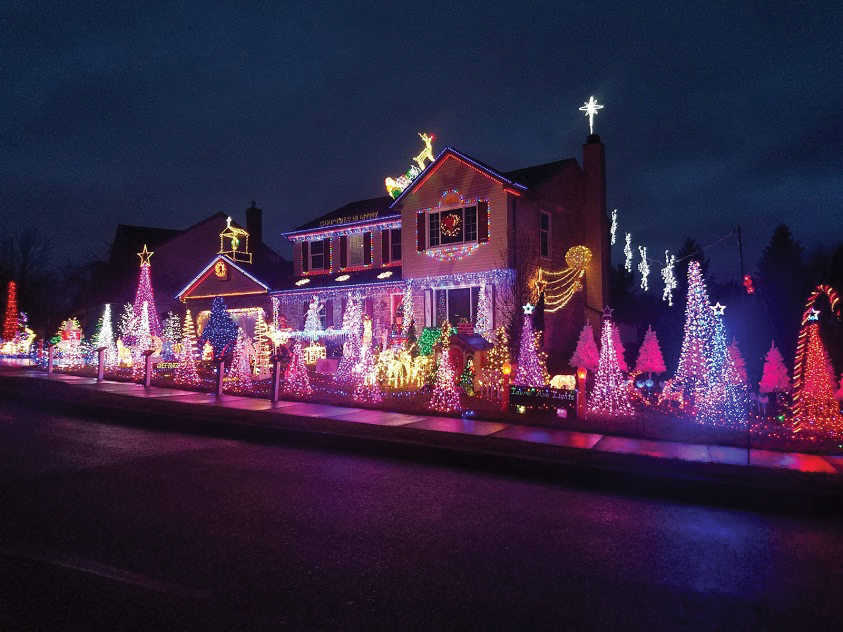 The contest – now in its second year – materialized when Lititz Springs Park canceled the Fourth of July celebration in 2020. The idea to sponsor a patriotic-themed home-decorating contest was formulated. The contest was so successful that a holiday-themed event took root. More than 20 homeowners participated.

Sponsored by Lititz Springs Park, Laurel Avenue Lights serves as the host for the contest. Homeowners Rich and Wendy Motz have been decorating their Laurel Avenue home for years and began accepting donations six years ago that are earmarked for a community organization. For the last five years, their organization of choice has been the Lititz Fire Company. Thanks to corporate advertisers and public donations, the Motz family was able to give more than $3,500 to the fire company last year.

As was the case in 2020, while Laurel Avenue Lights doesn’t participate in the home-decorating contest, it is part of the tour and welcomes visitors to stop by.

Laurel Avenue Lights is located at 659 Laurel Avenue in Lititz. The lights will be on from 5:30-10:30 p.m. daily from November 27 through December 31. Two 30-minute shows will alternate each evening. The choreographed music prompts the lights and props to move with the music.

For information about the homes participating in the contest (and tour) and to obtain a map, visit lititzspringspark.org beginning December 3. Voting (online) will take place December 11-24. Winners – in four categories – will be announced December 26.

Dennis uses a rebar to create deep holes that ensure decorations – such as the snowmen that line the driveway – don’t become dislodged.