Field of Screams is celebrating its 25th season this year. Owners Jim and Gene Schopf credit their success to hard work and a solid family ethic that was taught to them by their parents, Ed and Annette Schopf.

Ed Schopf taught 6th grade at Rohrerstown Elementary School for 31 years. He was known and loved by his students for making school interesting and fun. Mr. Schopf, who never failed to arrive at school wearing his trademark bow-tie, also loved to entertain Rohrerstown’s families. For the annual FunFest PTO fundraiser, he brought his tractor-drawn wagon to the school and provided hay rides. He was definitely in his element – he always appeared to be having more fun than anyone! 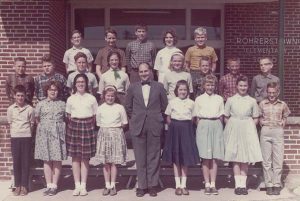 Ed was also a farmer, which explains his access to a tractor and wagon. Jim and Gene’s childhood memories include picking corn and potatoes for their dad on the family farm in Mountville. Being promoted from from digging potatoes to riding the potato digger was a big deal for them.

In middle school, Gene decided he could “make good money” by picking berries on the farm and selling them door-to-door in town. The venture met with success, and Gene convinced his parents that he could add to his earnings if he could grow other things. He began cultivating spring onions and corn, eventually adding all kinds of produce to his growing list. Gene admits that as a high school student, he was “more interested in picking sugar snap peas – in order to make a lot of money – than I was in going to school.”

Later, he conned his little brother, Jim, into helping him sell the produce from a small wagon, giving him a percentage of each day’s sales. “Jimmy was littler and cuter,” Gene says of their six-year age difference, “so sales soared with Jimmy along.” This “partnership” was the advent of Schopf Bros., LLC (Farms), which has locations in Silver Spring (Gene’s farm) and East Petersburg (Jim’s farm). Like their dad, the Schopf brothers became farmers.

Both boys also went on to attend college. They again followed in their father’s footsteps and became teachers. Gene taught graphic arts for 13 years, while Jim taught math for seven. Both were very successful wrestling coaches during that time (Jim continues to coach).

How it All Began …

Considering their line of business, many people assume Jim and Gene must have been enthralled by horror flicks as kids. They dispel that notion by saying they didn’t have a television growing up, and they rarely went to the movies. However, they do recall wearing costumes to go trick-or-treating.

What really piqued their interest was Youth for Christ’s Scream in the Dark event, which they attended in the ‘70s and early ‘80s. They never forgot the fun they had. According to Gene, “Since we had to pay to get in, after we finished walking through the ‘haunt,’ we’d carefully work our way back to the beginning and then do it again.”

By 1983 they had concocted their own haunt by assembling a simple straw-bale maze in their dad’s barn. Ten years later, Field of Screams debuted. It, too, began as a rather simple affair. “We took a bush-hog mower and hooked it up to one of the tractors and cut a path through the cornfield for hayrides,” Jim recalls.

Field of Screams’ popularity soared over the years. Today, more than 100,000 people visit the haunt each season (it has entertained more than 1 million visitors since its opening), making it one of the most successful agritainment ventures in the country. It has been featured on the Travel Channel’s America’s Scariest Haunted Attractions, and was voted No. 1 Haunt in America by USA Today. It was also featured in Time and Newsweek magazines, as well as on the Howard Stern Show. Patrons come from all over Pennsylvania, as well as Maryland, Delaware, New York, New Jersey, Virginia (and even farther) for the thrills and chills.

This level of popularity – and notoriety – was born from ingenuity, hard work and the collective brainstorming sessions that are held on a monthly basis. The Schopf brothers – both of whom retired from teaching in order to devote all their time to the business – like to think they have raised the bar in the haunt industry. They constantly come up with new ideas and bring them to fruition.
While their “busy season” lasts only three months, their work is never done. Planning and designing the fliers that are distributed throughout the Mid-Atlantic region is a job in itself (nearly 2 million are printed). As soon as one season ends, they immediately begin working on the next. Essentially, it’s become a year-round business. 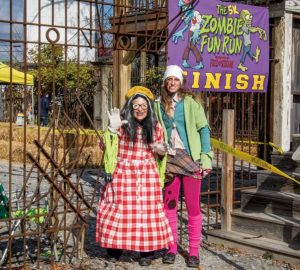 Field of Screams is also a family affair, as it includes the brothers’ mom, dad, wives and kids. Annette, who was the original “witch” during the haunt’s earlier years, has played other characters over the course of the last 25 years. She leads the actors in a prayer before each evening’s activities during the season (and enforces a no-cussing rule).

Annette and Ed are very proud of their sons’ success and the fact that “the boys were able to keep their standards high over the years.”

Along the way, Field of Screams has collected a cast (100+) of very talented and believable actors, as well as the services of an over-the-top makeup artist who does a little bit of everything to keep the show fresh and frightening.

The scenes at Field of Screams have become more intricate with each passing year. The days of a wagon ride with a couple of chainsaw-toting characters wearing bad wigs and popping out of a cornfield are long gone. Technology has taken the simple act of scaring people to all new depths. A set in the Haunted Hayride attraction that may have cost less than $100 to build years ago can now cost as much as $250,000. Scenes may now entail odors, fire, water, pneumatics, intricate lighting and digital surround sound.
Jim and Gene’s “scare” theory at Field of Screams is to take people’s fears and completely blow them out of proportion. Their main focus, however, is for people to have fun. They get a huge kick out of showing people a good time.

The brothers are also adamant about safety being the No. 1 factor at Field of Screams. A safety protocol is practiced every day for weeks before opening day each year. Every possible situation is covered to ensure the safety of guests. They have a disaster plan in place working with the local police, fire department and EMTs. They are regulated by the Department of Agriculture’s Amusement and Ride Division, ensuring even more safety for their patrons.

While Field of Screams is geared to all ages, research demonstrates that the average age of guests is around 30. Adult attractions include the Den of Darkness, the very popular Haunted Hayride, the Frightmare Asylum and the Nocturnal Wasteland, which this year will feature a “first-time ever” element — visitors will be able to traverse catwalks over various areas of the haunt.

Those who are extremely brave will want to put November 10 on their calendars. Billed as Extreme Blackout Night, the Schopfs warn that the lighting will be scaled back and the intensity level cranked up for this season-ending event. It’s not recommended for those under the age of 18. Since it’s usually a sell-out, buying tickets in advance is suggested.

For the squeamish, live music and a food court make for an equally good time.

And, Field of Screams continues to support the community in various ways. Jim and Gene are proud to report that they buy most of their building and prop-making materials locally to keep the money in Lancaster County. They also utilize the services of local people; for example, they employed Amish craftsmen to make the wagons that are used in their hayride attraction.

The Central PA Ghostbusters will be on hand October 7 to raise funds for the NHS Autism School, while the Central Penn Blood Bank will be at Field of Screams on October 27 to receive “donations.” The annual 5K Zombie Fun Run will be held November 11, with proceeds benefiting the Pennsylvania Breast Cancer Coalition.

What is the one thing that scares Jim and Gene the most? Jim is quick to answer, “Rain on a Saturday night!” And, they don’t want to even talk about the Halloween night – a Saturday – it snowed several years ago.

Field of Screams is located at 191 College Avenue in Mountville. The attraction is open Friday-Sunday nights and Halloween night through November 5. For details, visit fieldofscreams.com. 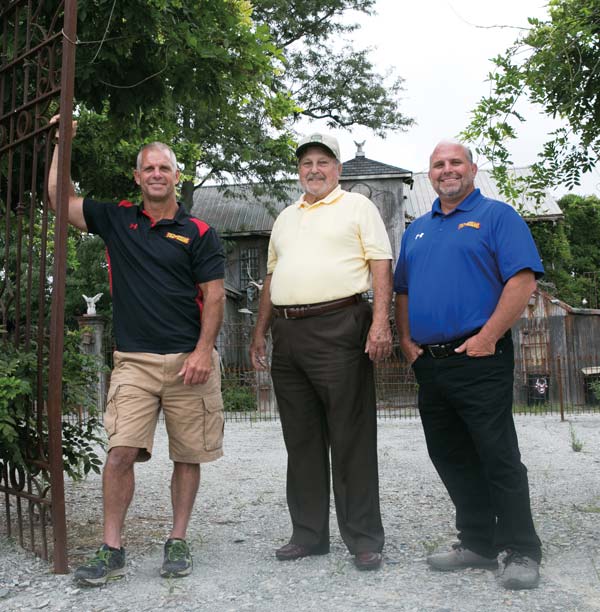