July 4, 2017, will mark the 200th time that Lititz celebrates Independence Day, making it the second-oldest continuous and community-minded event of its kind in the nation. 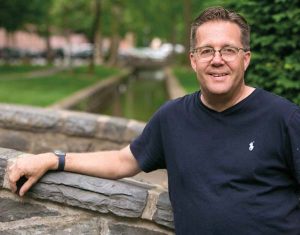 It’s safe to say that the chairman of Lititz’s landmark celebration, Tim Reedy, has never taken a vacation over the Fourth of July holiday. Now in his fourth year of running the show – with the help of nearly 400 dedicated volunteers, not to mention the support of local businesses – Tim nods his head and says that from the time he was a child, he knew where he’d be on the Fourth of July: Lititz Springs Park.

Unabashed pride in Lititz’s now-historic celebration is an inherited trait. His grandfather, Raymond S. Reedy, was a mayor of Lititz and was, therefore, heavily involved in the event. Tim remembers sitting on a bench as a college student with his grandfather one Fourth of July and being told that he was part of something very special.

The passage of time has only reinforced that sentiment. “The event and the park are both very special,” Tim affirms. “The Fourth of July is an important part of Lititz’s identity.” Indeed, in 1984, Lititz resident, Paul Foreman, wrote: “If you took the July Fourth celebration out of Lititz, it just wouldn’t be Lititz.”

And, the celebration has become a part of Tim’s own legacy; he has a tradition of community service to uphold. Tim’s father, Ron Reedy, who passed away last November, has always been regarded as the caretaker of Lititz’s history. If you wanted to know anything about Lititz, Ron was the man with the answers. He was especially dedicated to the Fourth of July celebration, having chaired the endeavor for decades (including the last milestone year, 1992).

Ron maintained meticulous records and had amassed an amazing collection of memorabilia. “He documented every year of the celebration,” Tim notes, “and he had a copy of every program,” the first of which was published in 1934. “My father always wanted to publish a book about Lititz’s Fourth of July celebration,” he adds.

Like his grandfather, Tim takes pleasure in sitting on a park bench during the Fourth of July festivities. “I like to sit and just watch the people who come to the park to celebrate,” he says.

Planning this year’s celebration began in earnest in April 2016. While this would be a milestone event, the planners wanted it to stay true to its mission of keeping history alive yet make it culturally relevant. “We want to remind everyone – especially the kids – that the Fourth of July isn’t just about  fireworks,” Tim says.

Thus, this year’s event will honor the pomp and ceremonies of the past all the while recognizing the age in which we live. Appropriately enough, this year’s theme is Independence, Remembrance, 200. “Keeping it fresh and new is always the challenge,” Tim adds. “Our ultimate goal is for everyone to leave with a memory.”

With that said, the planners were challenged with providing guests with an event befiting its milestone year. Lots of ideas were presented and discussed – including inviting high-profile government officials and chart-topping musical acts to the event. In the end, they decided that they would stay true to form and make the day about Lititz. “This is a tremendous, giving town,” Tim says.

Instead of expanding programming on the Fourth, the planning committee elected to create a series of events that would lead up to the big day. They began with a fundraising Lititz 200 Gala (held at Rock Lititz) in March and continued through the spring with Wine & Whiskey Fest, ArtsFest and Old-Fashioned Family Game Day.

Activities for the fourth will actually start the evening before, with the annual Lititz Lions Patriotic Parade, followed by entertainment in the park. July Fourth activities will include the inaugural Red, White and Bluegrass Festival (1-4 p.m.), featuring the bands Colebrook Road and The Dirty Grass Players. The Baby Parade, which dates to 1937 and features homemade floats and patriotically dressed tots, will kick off at 1:45 p.m.

Live entertainment will be offered in the bandshell throughout the day. “The goal was to create a USO feel,” Tim explains, alluding to appearances by the 85-member Lititz Community Band (patriotic music) and Mama Tried Band (high-energy dance music), as well as entertainers such as Rubi Nicholas, AKA “the funniest mom in America” and Chris Poje, a recent Pennsylvania Senior Idol winner, and A Legendary Remembrance by Pulse Dance Studio.

As dusk settles, the 76th edition of the Queen of the Candles pageant will take over the bandshell, followed by the 177th Grand Illumination that will see 7,000 candles (red, white and blue in honor of the occasion) set the park aglow. Sue and Mel Rohrer and their army of 80 volunteers have handled this aspect of the celebration for the past 20 years.

Tim estimates that the frames into which the candles are set are 50 to 60 years old. At one time, beeswax candles made by members of the Moravian Church were used, but as the quantity that was needed grew, organizers turned to commercially made candles.

DJ Ronny Ramone will then take over and host the high-energy Fireworks Party (design courtesy of Stray Production Services).

At approximately 10 p.m., Lititz will put its reputation as the entertainment center of the world – thanks to the Rock Lititiz Community – on the line with its spectacular fireworks show. The pyro/music show will once again be a collaboration of Celebration Fireworks near Allentown (which claimed second place in a worldwide competition two years ago) and Clair Global (soundtrack). “People put their chairs and blankets out as early as 7 a.m.,” Tim reports. He also shares that while as many as 15,000 spectators are in the park for the show, another 5,000-plus gather at prime sites around Lititz to view the fireworks.

“You are not going to want to miss this year’s show,” Tim says of the surprise element that will take the display to an all-new level. “It’s never been done in this area,” he adds with a sense of mystery.

While the event is a celebration of the Fourth of July, it’s also a fundraiser for one of the town’s most iconic landmarks: Lititz Springs Park. “It’s such a blessing to have this beautiful park in the middle of town,” Tim says. “It’s loved and used by everyone.”

Originally owned by the Moravian Church, a Declaration of Trust, signed in 1956, deemed it a public park on private property. A 17-member board is in place to oversee its maintenance and upkeep. “Every church in Lititz is represented on the board, plus there are community at-large members,” Tim explains.

At one time, the board oversaw the Fourth of July festivities, but turned it over to a committee of community volunteers about 10 years ago. The planning committee abides by the Moravian Church’s original by-laws: no alcohol, no games of chance and the event must be held on July 4, unless the holiday falls on a Sunday. 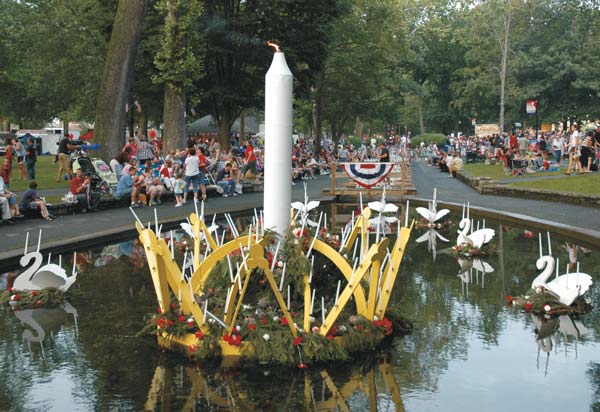