According to Tim Reedy, one of the goals of Lititz’s historic Fourth of July celebration is to educate younger generations about the freedoms that were fought for during the American Revolution.

When Lancaster County was organized in 1729, Warwick was one of its original townships. Wheelwright Richard Carter, one of that area’s first settlers, named the township in honor of his English birthplace, Warwickshire.

Lititz grew out of a Moravian settlement that was founded in 1754. However, the town’s roots extend back to the 15th century’s Bohemian Revolution, whose cause was religious freedom. Despite the demise of its leader, John Huss, in 1415, the revolution’s fervor lived on. By 1457, his followers – primarily from Bohemia and Moravia in Czechoslovakia – had found refuge on the estate of the king of Bohemia, whose palace was called Lititz.

In the early 1700s, Count Zinzendorf had become the leader of the movement, which had spread to England and North America. The faithful became knowns as Moravians.

Zinzendorf visited Warwick Township in 1742, which led to plans of building a settlement there. Land was secured in 1754, when John George Klein and his wife donated nearly 500 acres to the church. Building lots were laid out three years later. The settlement was named Litiz (the postmaster added the second “t” a century later).

Supporting the Cause for Independence

By the early 1770s, the seeds of independence from England were being sown in the colonies. From the beginning, Pennsylvania was regarded as the “keystone”  of the colonies due to its geographical, political, cultural and social significance. (In architectural terms, the keystone – or the central wedge in an arch – is the piece that all the other elements depend upon for the arch’s strength.) Pennsylvania, for example, sent nine delegates to the Continental Congress. One, John Morton, cast the deciding vote for independence. His vote was referred to as “the keystone vote.”

When the Revolution began, Lancaster riflemen were among the first to make their way to Boston. George Ross, William Henry and John Hubley were delegates to the Continental Congress. General Edward Hand led a group of volunteers who fought in New York and New Jersey. Hand, who later became Washington’s adjutant-general, is depicted in the famous painting of Washington crossing the Delaware River. James McMichael, a native of Scotland, who settled in Lancaster County, enlisted in the Pennsylvania Militia and served at Brandywine, Germantown and Valley Forge. Valley Forge Historic National Park includes him among General George Washington’s inner circle. 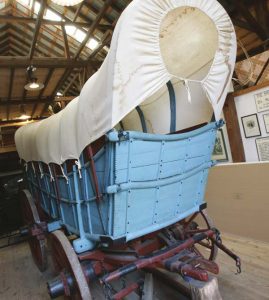 The fact that Lancaster County was a hub for agriculture, manufacturing and commerce made it a major contributor to the Revolution. According to Lancasterhistory.org, “Large quantities of supplies for the patriot army were shipped from Lancaster – cannons, ammunitions, rifles, camp kettles, as well as grain, shoes and uniforms.”

Transporting the goods was not a problem thanks to a Lancaster-made product, the Conestoga Wagon. Developed by Mennonite-German settlers in the early 18th century, the wagon caught the attention of James Logan, secretary to William Penn, who established an irregular freight line between Philadelphia and the Conestoga Valley with the purchase of one wagon (eventually adding two more). He called the wagons “Conestogas” due to their destination. Historians speculate the name could refer to the river, the town or the Indian tribe that all bear the name Conestoga.

The boat-like wagons were built to withstand the rugged terrain they had to negotiate. Their design also ensured that loads would not shift.

By 1775, 10,000-plus Conestoga wagons were traveling the roads of Pennsylvania (and beyond). It was not uncommon for a single wagon train to consist of 100 wagons. One of the major thoroughfares was Route 322, which at the time was the primary route between Harrisburg and Philadelphia. What is now the Brickerville House Family Restaurant was a popular stopover for teamsters to take a break and feed their horses.

Conestoga wagons departing from Lancaster County were a major source of supplies for Washington’s encampment at Valley Forge during the winter of 1777-78. In the spring of 1778, a Conestoga Wagon delivered $600,000 in silver – a loan from the French government – from Portsmouth, New Hampshire, to York, Pennsylvania.

By the Civil War era, the Conestoga Wagon had become obsolete. They were replaced by canal systems and the railroad.

Lititz and the American Revolution 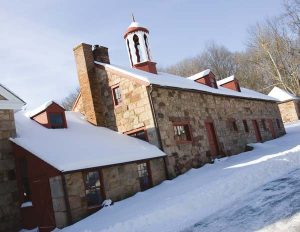 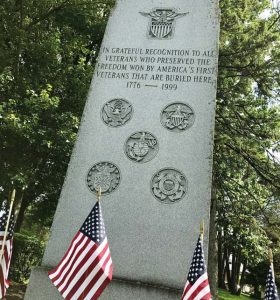 The Lititz area has two significant connections to the Revolutionary War. Following the battles of Brandywine (September 11, 1777) and Germantown (October 4, 1777), the Moravian Church’s Brethren’s House in Lititz became a hospital for injured soldiers. More than 500 soldiers arrived in Lititz between December 1777 and August 1778, 110 of whom died. Their remains were buried on the outskirts of town. The exact location remained a mystery until 1932, when a cellar that was being excavated revealed the burial site.

Ultimately, the remains were reinterred in the cemetery along East Main Street. A memorial sign declared them as being among the first of America’s unknown soldiers.
The winter of 1777-78 also took its toll on the troops who were encamped at Valley Forge. According to LNPs Jack Brubaker (The Scribbler), more than 2,000 soldiers died there that winter. Soldiers suffering from wounds, illness and starvation were ultimately cared for in Pennsylvania, Maryland and New Jersey. However, the largest contingent were nursed back to health in Lancaster County, namely in Lititz, Lancaster, Ephrata, Manheim, Reamstown and Brickerville.

A year earlier, troops of another sort arrived in the Lititz area. In the winter of 1776, the Continental Army was on the run following their defeat at the Battle of Long Island.

Morale was low. The Army had retreated to eastern Pennsylvania, while the British and their hired troops, Hessians from Germany, were encamped on the opposite side of the Delaware River near Trenton.

General George Washington hatched a plan that would ultimately win battles and raise morale: an attack on the Hessian camp that would be launched late on the night of December 25. Knowing the Hessians would be celebrating Christmas, the Army took them by surprise. The ploy met with success: Not a single Continental Army soldier was killed. However, 30 Hessians lost their lives, while 900 were taken as POWs.

Hessian and British POWs were problematic for the Army. Prison camps were almost nonexistent due to the lack of food and manpower. Instead, Washington would barter their services for munitions. A contingent of Hessian POWS was sent to the Elizabeth Furnace in Brickerville to serve as laborers. The foundry, which produced munitions for the Army, agreed to trade cannon balls and other items for Hessian laborers. They were housed in buildings that still stand on the Coleman Estate/Elizabeth Farms.

The Hessians were assigned the task of digging a trench that would carry water from Seglock Run to a newly constructed waterwheel that would add to the foundry’s efficiency. What came to be know as the Hessian Trench was dug over a six-month period starting in early 1777.

Following the war, many of the Hessian soldiers elected to stay in Lancaster County due to the already large German/Swiss population that resided here, religious freedom and the availability of land. 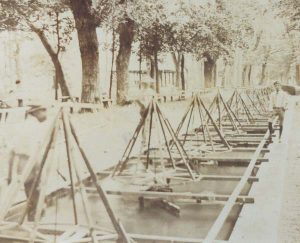 Prior to the arrival of settlers, the swampy area located on the western edge of Lititz was used by Native Americans as a place to take the waters. The Moravians sought to beautify it and transform it into a park. In 1780, Tobias Hirte, a music teacher, attempted to improve the area by planting willow trees. Flooding carried them away.

Twelve years later, townspeople added fill to the swampland, planted trees, built a wall around the spring, erected structures and constructed a bridge over Lititz Run. Once again, the project met with disaster. The only trees to survive were the locusts, and area farmers were miffed that their cows no longer had access to the spring.

By 1846, John Beck, the principal of the Lititz Boys Academy, was put in charge of the park. Not willing to give up, he and the town’s residents launched yet another beautification project. Fencing materials were purchased through a fundraising effort. A new wall was built around the spring, and more trees were planted. This time, the trees thrived.

It wasn’t until 1957 that another beautification/modernization project was conducted thanks to a $100,000 grant from Warner-Lambert. While the land is owned by the Lititz Moravian Church, the park is operated by a board of trustees and is supported by civic groups and businesses.

A Celebration Is Born 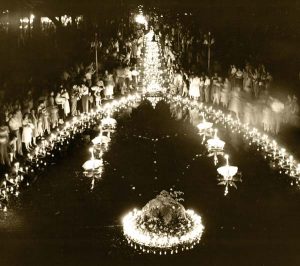 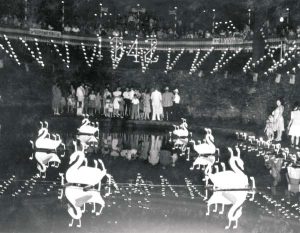 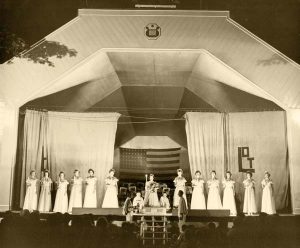 The Fourth of July was commemorated in Lititz as long ago as 1778, when Tobias Hirte and an orchestra organized a concert for soldiers who were recovering from injuries and illnesses in Lititz. Impromptu celebrations continued into the early 1800s. However, the Moravian Church did not condone the events, as is reflected in the minutes from the Board of Overseers’ meeting that was held on July 22, 1811: “By this opportunity came up the offensive conduct of many of our young people on the Fourth of July (Independence Day), who not only associated with the neighboring military company, which had paraded here during the day, but made merry with music at the Spring, and greatly disturbed the village late into the night, thereby giving the cause for criticism from our outlying neighbors.”

By 1818, the Moravian town fathers had adopted a new viewpoint; not wanting to appear unpatriotic, they bestowed their approval for Fourth of July celebrations. In 1822, Lititz Springs Park was named the official home of the town’s Fourth of July activities. 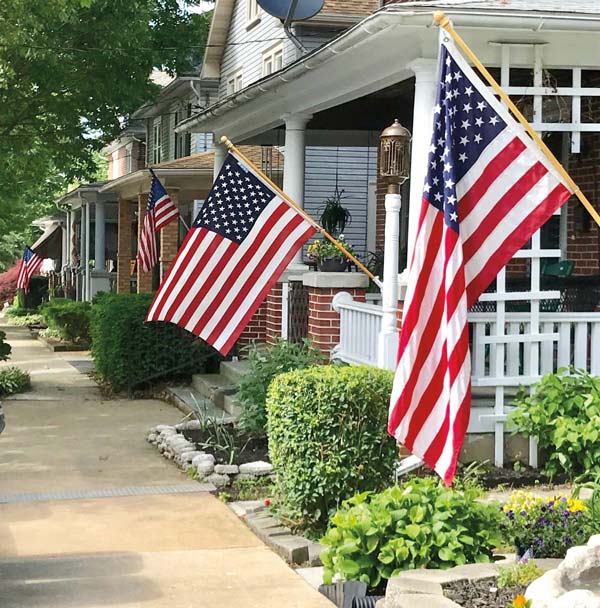