It’s funny how contacts are made. Three years ago, when a trip to the Pet Emergency Treatment Services center was needed, I was fascinated by the gorgeous photography of dogs that graced the walls. I made a mental note of the name – Willow Street Pictures – and assumed the photographer was based in Willow Street. I googled the company’s name and learned that it didn’t relate to Willow Street at all, but is Reading-based. However, the owner, Darren Modricker, had connections to Lancaster, which was intriguing. The images from the website stayed stuck in my head.

Then, in January I took my new dog to Happy Tails Animal Hospital for her shots and annual exam. I found Miss Paisley, whose last stop was Kentucky before the Delaware County SPCA took her in, through PetFinders. I wanted to rescue a dog from the South because of the high rate of euthanasia that plagues southern shelters. I liked the fact that Dr. Diane Hodges, who owns Happy Tails, hails from Charlotte, North Carolina. Anyway, there was that photographer again! This time, I took a card that was made available. I had always wanted to do a “working dogs” feature and decided Darren was the man to do it. Fortunately, he agreed to take on the project.

Soon after Darren was born, his family moved from North Plum Street to Berks County where, as a sixth grader, he took an elective photography class. After making his first print, Darren was hooked and was never without his camera. His talents took him to the School of Visual Arts in New York.

After graduating (BFA), Darren was accepted into the Eddie Adams Workshop. Adams, a Pulitzer Prize-winning photographer, launched the workshop as a way to mentor emerging photographers. Only 99 photographers were accepted into the program, with 10 being deemed the best of the best based on the work they created during their tenures at the workshop. Darren was among the 10. From there, the world was his oyster. He traveled constantly for corporate clients, magazines and other media. “I was having the time of my life,” he says.

One morning he woke up with excruciating pain in his right leg. A trip to the ER resulted in a diagnosis of deep vein thrombosis (DVT), which claimed the life of NBC newsman David Bloom during an assignment in the Middle East. The diagnosis prompted Darren, who was in his 30s, to rethink his life. He had a family he dearly loved and wanted nothing more than to see his daughter grow up. “So, I bought a warehouse in Reading and decided to go in the direction of fine-art portraiture,” he explains. Willow Street Pictures, which refers to the street on which the warehouse is located, was born.

Darren was determined that his portraits would be different. Not the grip-and-grin or deer-in-the-headlights variety, but more along the lines of windows to the soul. He wanted his images to capture the essence of an individual or a family and become cherished mementos that would be shared with generations to come. The phone didn’t exactly ring off the hook.

Then, a family with twins and sextuplets called to inquire about Darren’s services. Yes, that family of reality-TV fame. The photo shoot became an episode on Jon & Kate Plus 8. Soon the phone was ringing, and the UPS man was delivering packages. “It was crazy,” Darren says. “People would send gifts for the kids to the studio and ask me to get them to the Gosselins.”

Then, Darren’s life changed once more when a client, nervous to have his portrait done, asked if he could bring his dog along. Darren had so much fun with the dog that he took pet photography in an all new direction. “Dogs bring out the human side of people,” Darren theorizes. But, working with dogs “requires patience,” he admits. “Dogs will be dogs,” he says of their exuberance or reluctance to follow directions, “but that’s often part of the charm of the images.” So, he’s willing to devote the time that’s necessary to get the money shot that makes people ooh and aah or even burst into tears.

The walls of Darren’s gorgeous studio and gallery in West Lawn – he moved out of the warehouse – are hung with portraits of dogs (and their humans) that cover the gamut and range from show dogs to beloved family members to rescue mutts.

The affirmed dog lover also uses Willow Street Pictures to do good by supporting organizations that concern themselves with everything from health issues to animal rescue. “Animal rescue is near and dear to my heart,” he says. 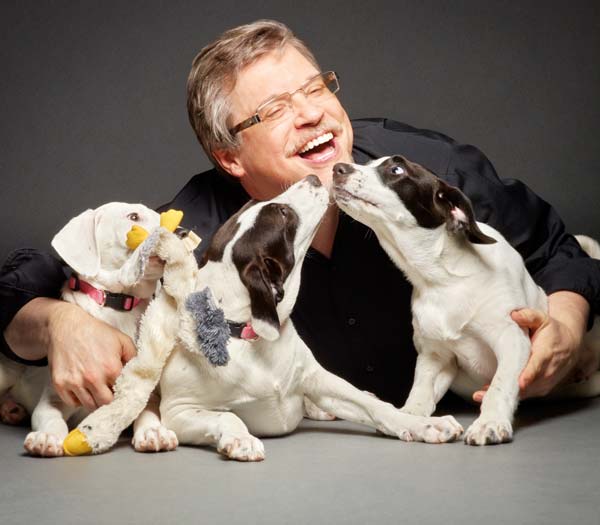 By releasing this self-portrait to the Reading Eagle newspaper, Darren helped find forever homes for these pups that were found abandoned along a rural road in Tennessee and were taken in by a rescue organization in Reading.