Isn’t it odd how food can trigger a memory. Back in June, my son, Charlie, treated me to a Nationals game in D.C. I haven’t been in D.C. in probably eight years and was amazed by what they’ve done in the section of town where the stadium is located. Northeast D.C. used to be no-man’s land. Now, it’s filled with restaurants, shops, office buildings, parks and condos. Construction was taking place everywhere, most likely in preparation for D.C. hosting the All-Star game in 2018.

But, I digress. Charlie was intent on finding a restaurant called Due South. The nearly 2-mile odyssey took me back in time (about 45 years) to college in North Carolina. I’ll always remember the night my roommate took me to College Barbecue in Salisbury and introduced me to Carolina-style barbecue, slaw and hush puppies. You didn’t pair the combo with sweet tea, but with a local delicacy called Cheerwine.

Cheerwine was developed in 1917 by LD Peeler, who owned the Carolina Beverage Company. The highly carbonated drink’s wild cherry flavor made people forget about sugary drinks. That was part of Peeler’s plan: due to World War I, sugar was in scarce supply.

The rest, as they say, is history. Cheerwine was solely available in North Carolina until the 90s, when it expanded across the border into neighboring South Carolina. Now, it is going nationwide thanks to a partnership with Pepsi and will be available in all 50 states in time for its 100th anniversary in 2017.

Still family-owned, Cheerwine is also available as an ice cream and sherbet flavor. A local bakery also makes Cheerwine cakes. The newest claim to fame is a Kreme drink that combines the tastes of Cheerwine and Krispy Kreme Doughnuts. Finding that is at the top of my shopping list when I’m on Hatteras Island in late August.

But, it’s Cheerwine’s connection to barbecue that has solidified its fame. It’s the No. 1 or No. 2 brand of soft drink sold at barbecue joints, and it’s the official soft drink/sponsor of the National Barbecue & Grilling Association.

Yep, I remember many a late night when we wanted something to eat and would cross the Tar River in Greenville (I transferred to East Carolina University) and go to some ramshackle gas station for barbecue and Cheerwine. Lord knows where and how the barbecue was made, but it was fantastic!

If we wanted seafood, we went to a cinderblock building out in the sticks called Cliff’s. The food was unbelievable. For weekend trips to Myrtle Beach, we always reserved $10 from our beer money so that we could go to a small fishing village on the NC/SC border called Calabash for dinner (right off the boat) on Saturday night. Again, the food was beyond comprehension.

Guess what was on the menu at Due South? Cheerwine! I had to have it, along with Carolina-style barbecue, cornbread, collard greens (with bacon), and mac-n-cheese. I smiled the whole time. Charlie, who had shrimp & grits, thought it was a little strange that something as simple as a drink could make me so happy. But, then again, according to legend, that is why it’s called Cheerwine.

Speaking of Greenville, I’m now obsessed with Chef Vivian Howard, who has a restaurant, Chef & The Farmer, that’s reached mecca status in the nearby farm town of Kinston, North Carolina. Vivian, who couldn’t wait to get out of her small town, landed in New York. Her parents enticed her to move back home with the promise of helping her to launch her own restaurant.

I discovered her PBS show, A Chef’s Life, while channel surfing one Sunday. Again, it brings back memories of my North Carolina relatives (all of whom can cook up a storm) and college. I even called to see how long it would take to drive to Kinston from the Outer Banks. Three hours (counting a ferry ride) was a little daunting, so one of these days, I’ll have to take a road trip and also stop at the Lantern Restaurant in Chapel Hill. I read somewhere that its heralded owner/chef, Andrea Reusing, credits summers with her Lancaster County grandparents for forging her interest in the farm-to-table concept.

The same phenomenon happened when photographer Kirk Zutell and I visited Central Market for this month’s issue. Following in Martha Stewart’s footsteps, we stopped by Ric’s Bread and sampled the most incredible sticky buns and croissants. The sticky buns reminded me of sleepovers at my cousin Cassia’s house and going to Pfannebecker’s Bakery on Manor Street the next morning.

The girls tending the stand at Maplehofe Dairy invited us to try a sample of the chocolate milk. One sip and I was at my grandfather’s Cabbage Hill dairy, where he made chocolate milk on Wednesdays. I bet I haven’t had chocolate milk since I was a kid!

Kirk and I just looked at each other; words could not express how good that chocolate milk was. 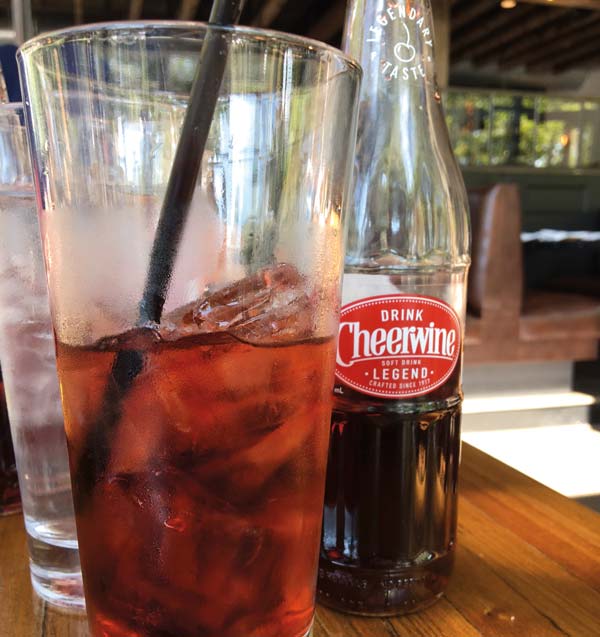