As Mainspring’s Kelly Withum explained, attractions such as breweries and wineries are some of the hometown amenities that appeal to potential residents, specifically millennials.

David Gallagher is from New Jersey. Rebecca Gallagher hails from New York. They met and married in Texas. Now, Ephrata is home. 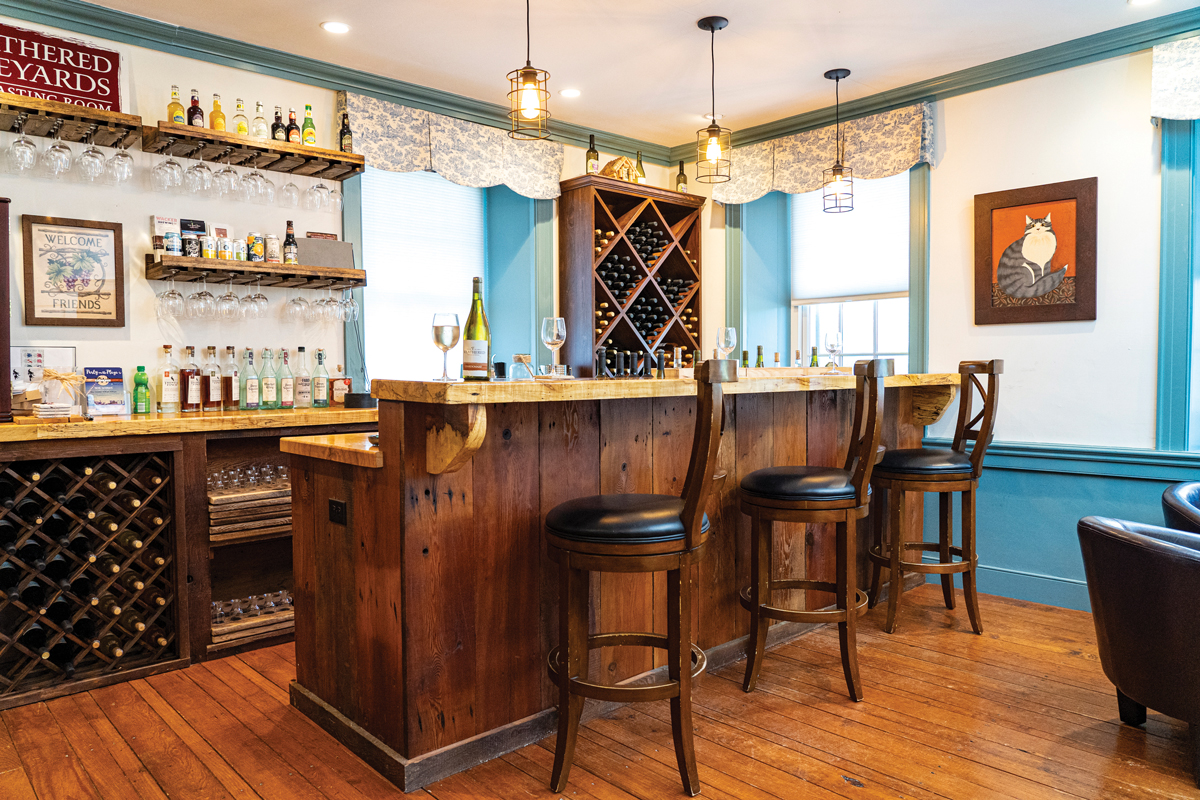 A seldom-used sitting room was transformed into a tavern room. Dwight Graybill of Cocalico Builders designed and crafted the bar using reclaimed wood.

Ten years ago, the Gallaghers fulfilled their dream of moving back to the East Coast when they purchased the Historic Smithton Inn, a 7-room bed & breakfast whose roots extend to the early days of the Ephrata Cloister. The house (and a tavern), with its distinctive checkerboard pattern, was built by Henry Miller in 1763 on land that his father obtained (as a debt settlement) from Conrad Beissel. The Miller family was a householder member of the Cloister congregation.

Henry died 15 years after building the house as a result of falling prey to the fever that spread through the Cloister when it served as a hospital for soldiers convalescing from wounds received during the Battle of the Brandywine. Ownership of the house then transitioned to succeeding generations of Miller’s family until it was purchased by Israel Erb in 1856. It remained in the Erb family until 1979, at which time Allan and Dorothy Smith bought it and transformed the home into a bed & breakfast. Allan, who was an architect, did much of the remodeling work himself. When the Gallaghers purchased the property, it was in need of a new roof and windows, plus a stormwater drainage issue needed to be resolved.

Rebecca put her marketing background to work in order to nurture the business and become a part of her new hometown. In 2013, the Gallaghers celebrated the Smithton’s 250th anniversary with a year-long slate of festivities; each event served as a fundraiser for an Ephrata-area nonprofit organization. Rebecca also involved herself in community endeavors, including the Winters Memorial. 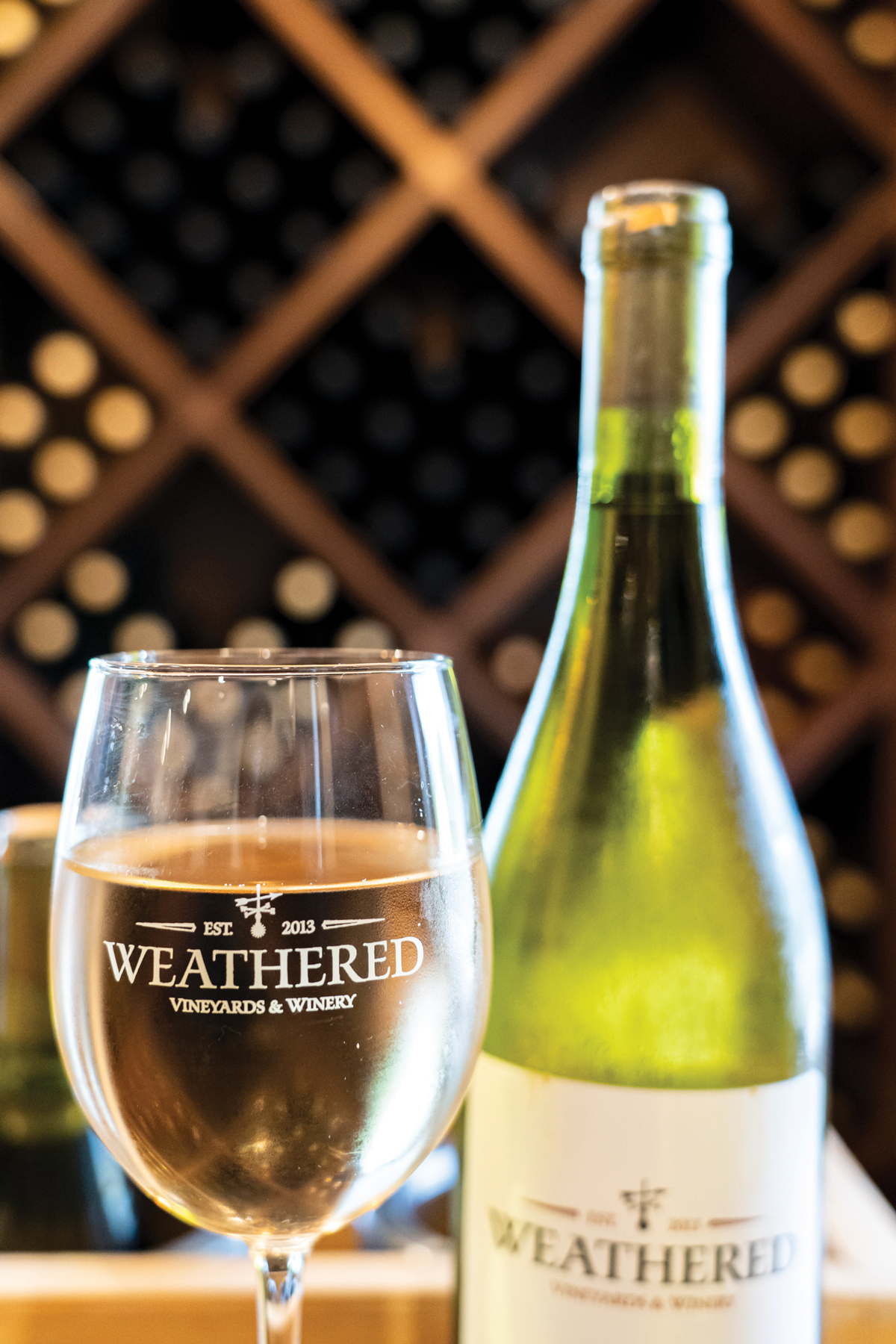 Inn owner Rebecca Gallagher reconnected with her high school classmate, Richard Woolley, who with his wife, Dana, operates Weathered Vineyards & Winery in Lehigh County, and a partnership was formed to open a tasting room at the Historic Smithton.

Rebecca is a firm believer that in order to be successful, a business must constantly evolve. In the case of the Historic Smithton, gardens began springing up. A cottage was renovated. A guest house was acquired that offers two bedrooms and a full kitchen. The inn became small-wedding friendly. Pets are welcomed. Technology is an amenity and extends to two electric vehicle charging stations.

A few years ago, Rebecca began contemplating a new use for the sitting room that went unused. “In a business such as this, if something’s not working, you need to make a change,” she explains. The answer came as a result of Rebecca reconnecting with a high school classmate, Richard Woolley, who, with his wife, Dana, launched Weathered Vineyards in New Tripoli, Lehigh County, in 2014. The Gallaghers and Woolleys formed a partnership to open a wine-tasting venue at the Historic Smithton.

The Gallaghers went to work, transforming the retiring sitting room into an inviting tavern room – Dwight Graybill of Cocalico Builders created the bar using reclaimed wood. Outside, they created an equally inviting courtyard. The menu includes Weathered Vineyards’ lineup of red and white wines, as well as locally sourced craft beer, soda and spirits. A Wine & Dine menu was created by Javateas, a local café.

The Gallaghers also added live music to the agenda, as well as special events such as holiday parties and maker/craft events. The tasting room is home to the Boozy Book Club; last month they hosted a Wine & Ice Cream Pairings event.

Their efforts have not gone unnoticed. Guests love the convenience of staying on-site, while locals are embracing the novelty of having a tasting room in their own backyard.

Room with a Brew

Denise and Bob Harter were able to realize dual dreams when they purchased the 1777 Americana Inn. 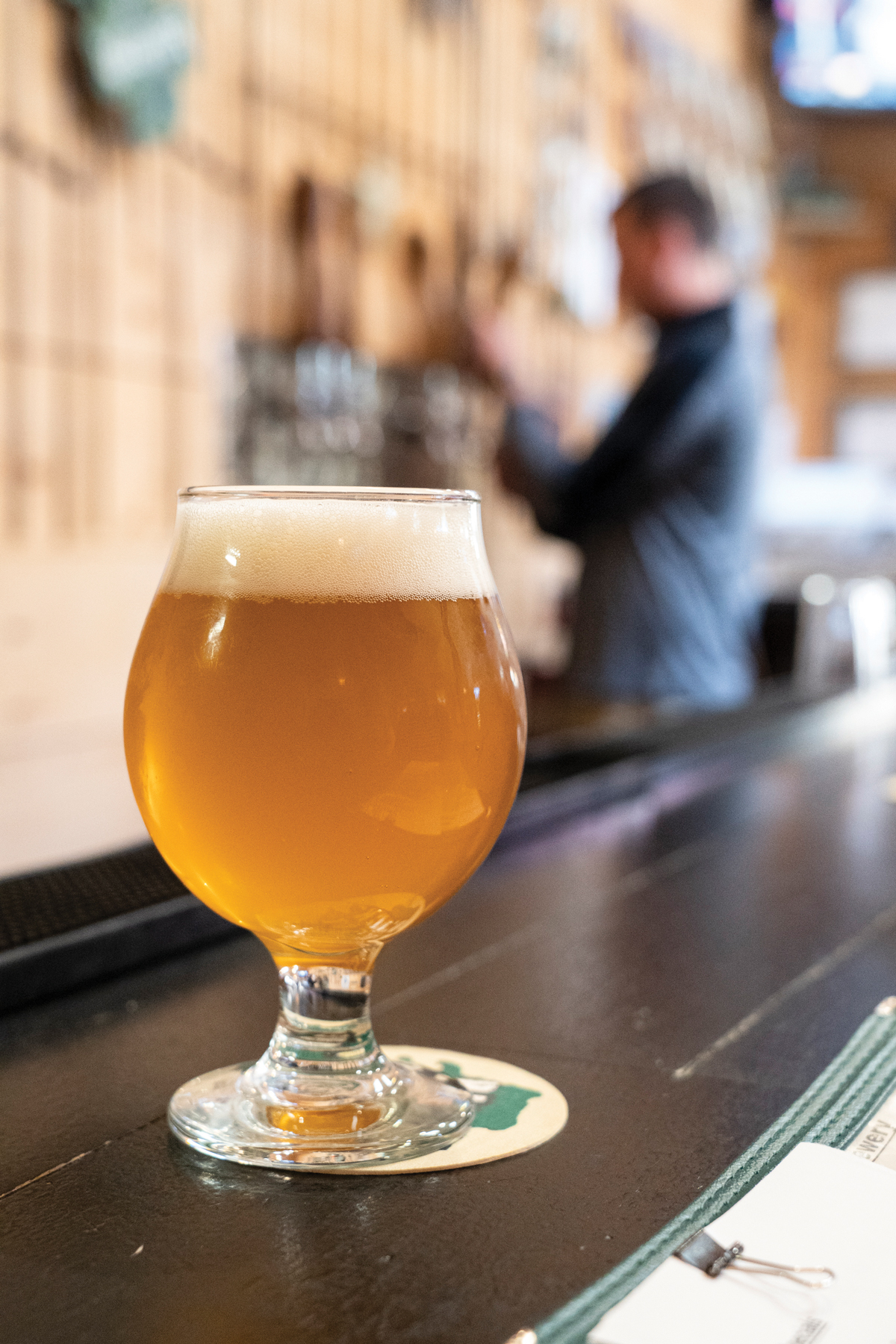 Black Forest Brewery was a dream of home-brewing enthusiast Bob Harter, who often brainstormed brewery ideas with his sons as they hiked the Black Forest Trail. He realized his dream when he and his wife, Denise, became the owners of the 1777 Americana Inn.

What’s the perfect second act for a consumer science teacher and a project manager for an accounting firm who is also an avid home brewer? If you said “innkeepers,” you would be correct. About 10 years ago, the Berks County residents launched their search for a suitable property. Their search led them across the border to Lancaster County and a distinctive white house on Main Street in Ephrata that was built by the renowned tall-case clockmaker Jacob Gorgas in 1777. After his death in 1798, the house was owned by a series of owners. During the 20th century, it was home to a doctor’s office. In 1988, Bill Donecker added it to his Doneckers community, transforming it into a bed & breakfast. When Doneckers closed, the inn went on the sale block. The Harters took it over in 2014.

Today, the inn offers guests a unique amenity – a brewery – hence its tagline, Room with a Brew. That concept came into fruition as Bob and his three sons hiked their favorite trail – the Black Forest, which loops through parts of Clinton, Potter and Lycoming counties – and would discuss beer. Bob and one of his sons, Ryan, were avid home brewers and dreamed of opening their own craft brewery. By 2009 they had turned their trail conversations into reality and trademarked their enterprise as Black Forest Brewery. With the purchase of the inn, the property provided them with space for a small brewery/brew pub. 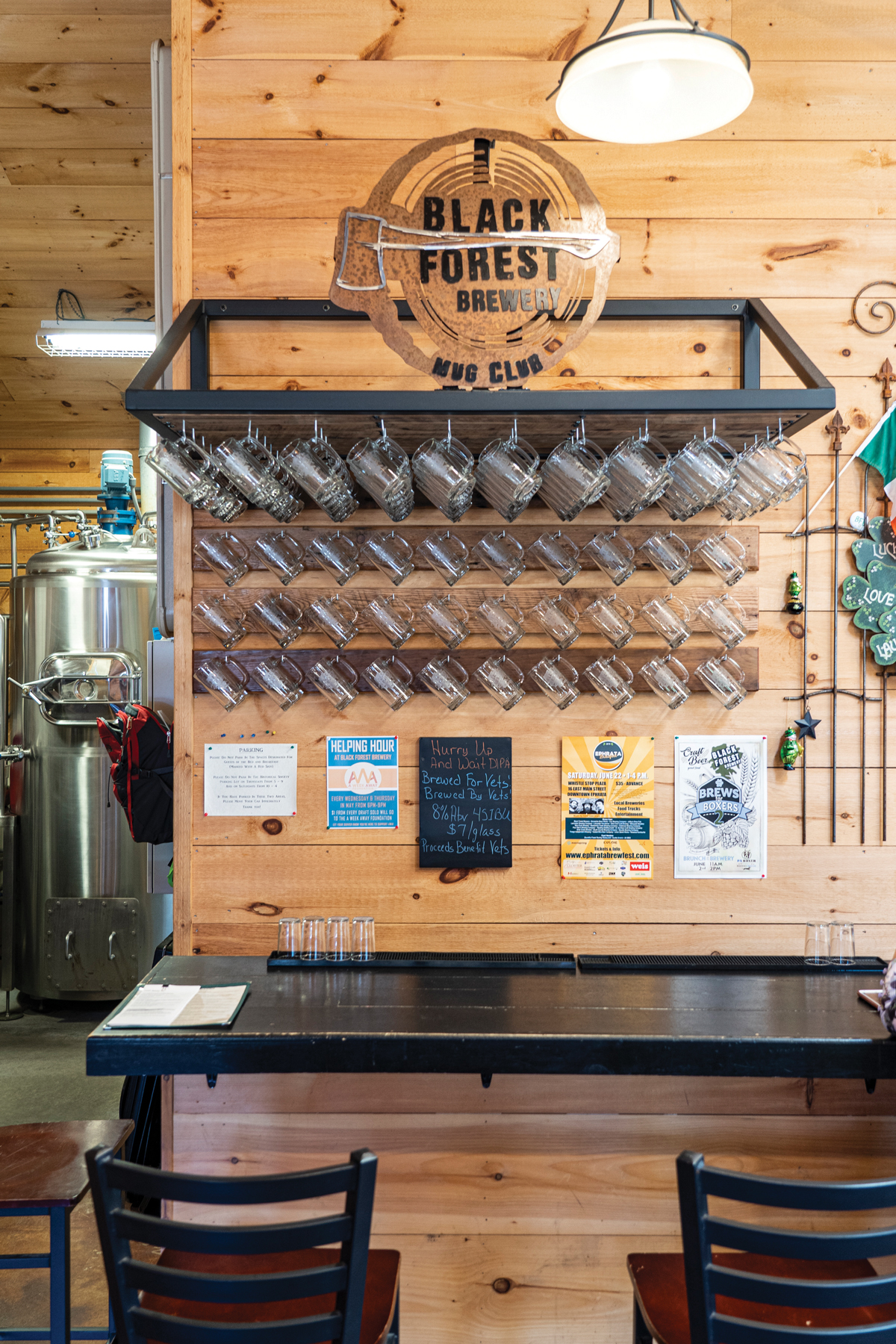 The brew pub has become known to guests and locals for its beer that is named after local history and its extensive food menu.

Step inside the brew pub and the impression is mountain cabin. On the day we visited, locals were joined at the bar by a group of day trippers from Reading. Outside on the patio, guests were enjoying food, brews and sunshine.

The rotating beer selection, which is named after local history, could include IPA, bock/maibock, stout and ale. The focus of the extensive food menu is pub fare, with many ingredients locally sourced. Wine from Allegro is also available. Live music and special events dot the calendar.

The ventures met with success — in 2015, the 1777 Americana Inn was named a Top Beer Lovers Inn by BedandBreakfast.com.

The Harters feel as if they were destined to live in Ephrata — Conrad Beissel hailed from the Black Forest region of Germany.

St. Boniface is the inspiration for an Ephrata craft brewing company that has grown by leaps and bounds since Jess Northrup and Mike Price launched the county’s first one-barrel nanobrewery in 2011. 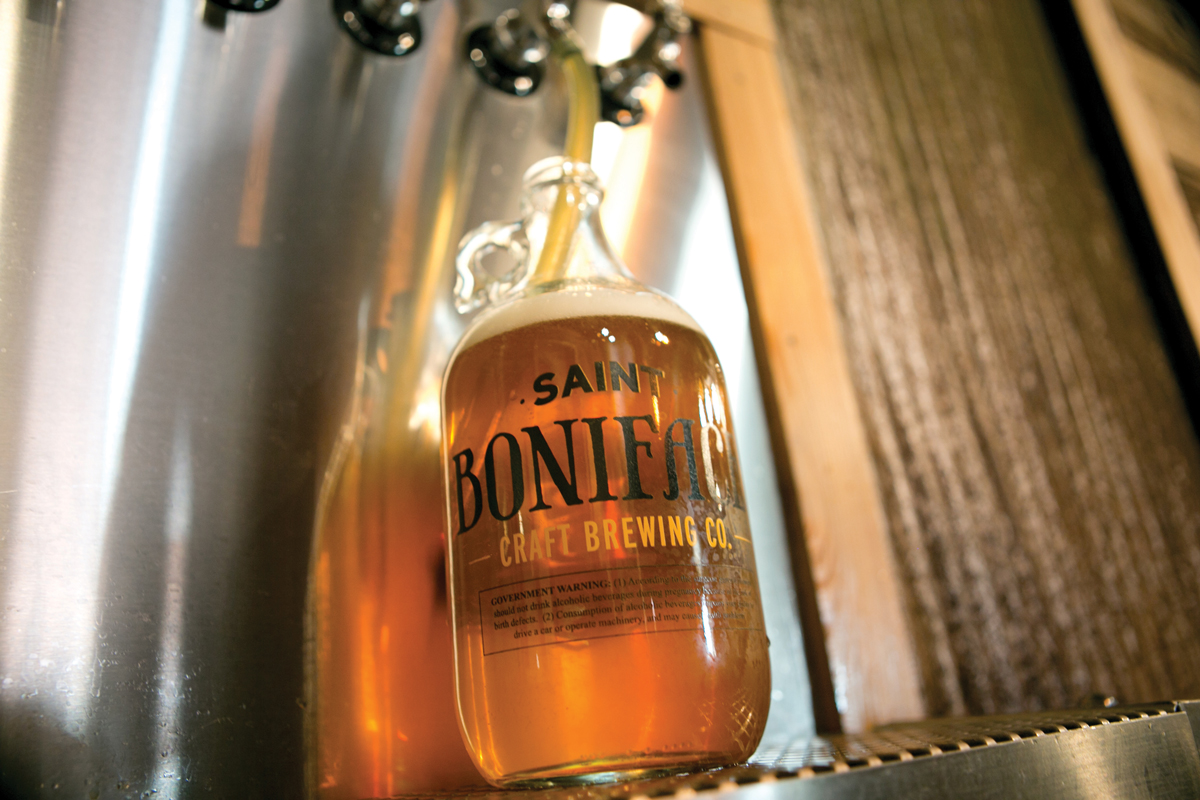 St. Boniface Craft Brewing Company made its debut as Lancaster County’s first nanobrewery in 2011. Its popularity prompted two moves, the last being to a former milk-processing facility. The location provides space for a full-scale production facility and canning line, as well as a kitchen that pumps out pizza, calzone and other goodies.

The St. Boniface connection is a multifaceted one. In the pre-Christianity days, people worshipped trees that the gods deemed to be sacred. Boniface, an English priest who ventured to Germany, set out to dispel that belief by taking an axe to such a tree that grew near the village of Fritzlar. A mighty gust of wind helped him to complete the job. When onlookers saw that the gods did not retaliate and Boniface remained unscathed, they converted to Christianity. His feast day of June 5 marks the date on which he was killed by robbers.

Boniface is also regarded as a patron saint of brewers. That distinction harkens back to the days in which monks would brew beer that was sold to inns and helped to establish the pub tradition. In order to differentiate one beer from another, the monasteries began to name their brews after their patron saints.

The founders of Ephrata’s St. Boniface Craft Brewing Company adopted a mighty oak tree as part of its logo and promised beer lovers that they would take an axe to bland beer. If the brewery’s success is any indication, it seems that St. Boniface has been protectively looking over the operation. In turn, the brewery has hosted an event in Boniface’s — and Ephrata’s — honor since 2014. Called Bonifest, it is held on a Saturday near to Boniface’s June 5 feast day. The annual event features beer, food and music. Attendees are encouraged to bring canned goods, which are donated to local food banks. Last year, nearly 350 pounds of food was donated. 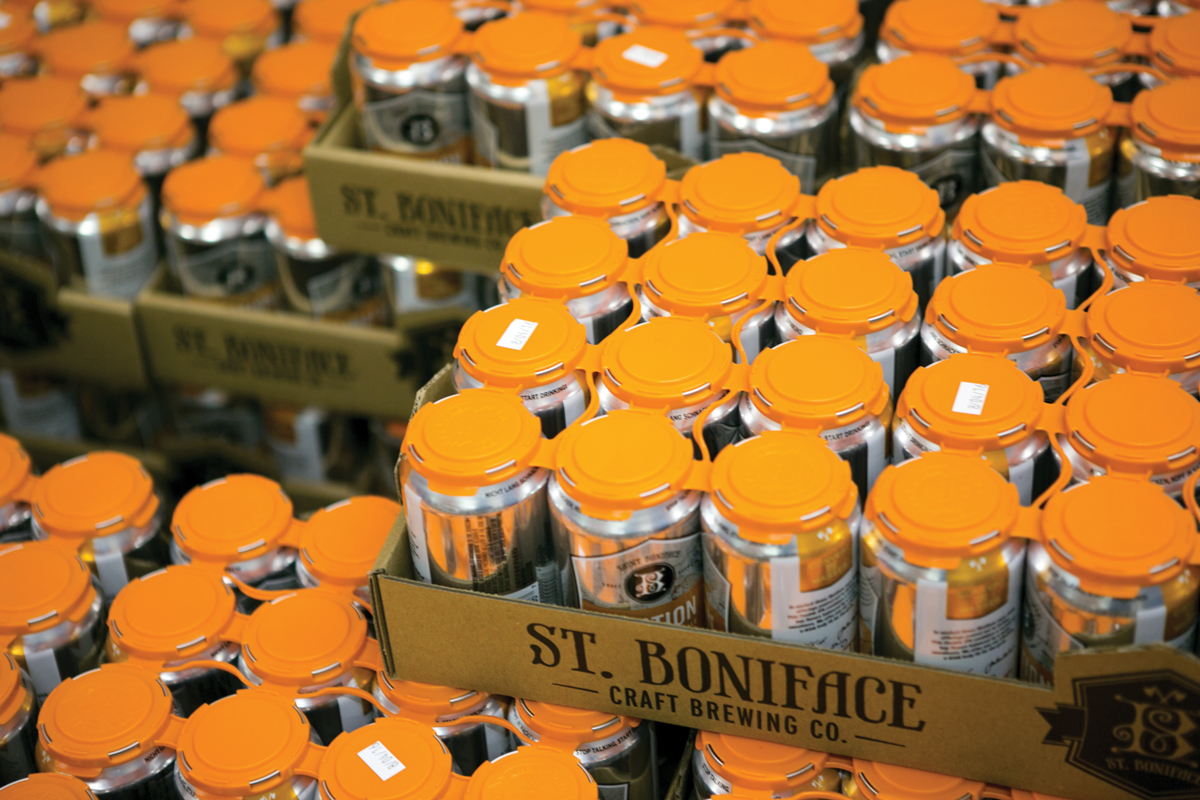 As for their nano beginnings in an equally small building, on the first Saturday they opened to the public, the beer was gone in a matter of hours. So, they moved and expanded to a three-barrel operation. Demand continued to outpace supply. St. Boniface relocated once again to a building that had formerly served as a milk-processing facility. Again, demand — and the presence of food trucks on Saturdays — literally tapped the kegs dry.

On August 24, another annual giving-back event will be held. Called the Amazing St. BoniRace, it takes its inspiration from CBS’s reality show, The Amazing Race. Proceeds will benefit the No Limits Foundation.

Black Forest Brewery was a dream of home-brewing enthusiast Bob Harter, who often brainstormed brewery ideas with his sons as they hiked the Black Forest Trail. He realized his dream when he and his wife, Denise, became the owners of the 1777 Americana Inn.