This year marks the 75th anniversary of D-Day, June 6, 1944. Operation Overlord, which included the Normandy Landing, was the largest seaborne invasion in history. The operation, which was a year in the planning, would see Allied forces storm the beaches of Normandy in France and eventually liberate all of mainland Europe from Nazi Germany. Throughout the operation, a young man from Ephrata played a key role in the outcome.

Ephrata native, Richard Winters, enlisted in the Army immediately after he graduated from Franklin & Marshall College in 1941. Upon completing basic training, he was selected to attend Officers Candidate School, after which he was commissioned as a second lieutenant. He joined the parachute infantry, which was part of the Army’s new airborne force. 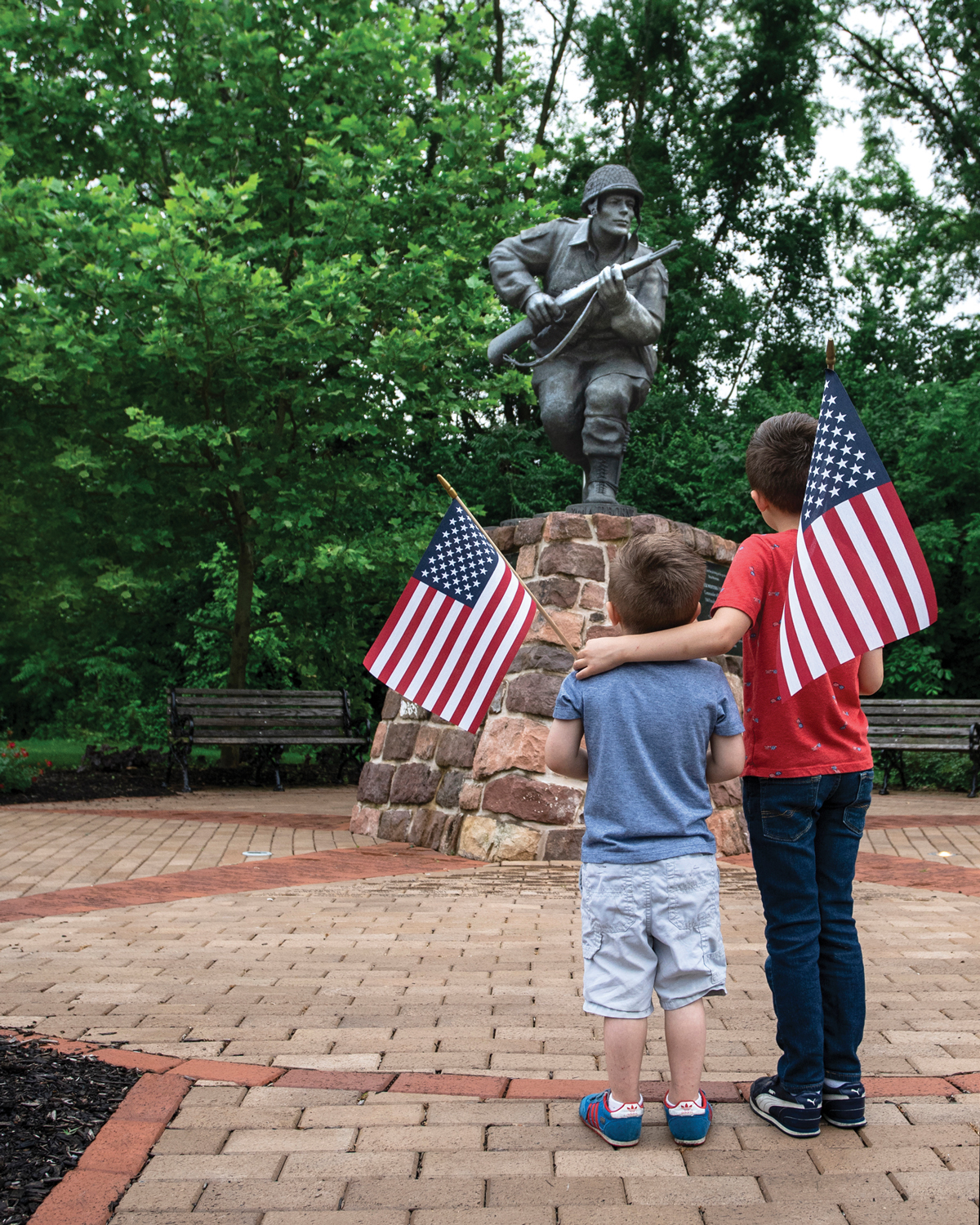 In 1943, plans for the D-Day invasion were well underway. Along with thousands of other members of the parachute infantry, Winters was sent to England to prepare. Like many other members of the infantry, Winters resided with an English family. He spent the months leading up to the invasion preparing mentally, physically and spiritually. He poured over tactical manuals, refrained from socializing and attended Sunday church services without fail, missing only three in nine months’ time.

On June 6, Winters assumed command of Easy Company (2nd battalion, 506th Parachute Infantry), when the 101st Airbourne Division parachuted under the cover of darkness into Normandy. Winters led a contingent of his men in destroying an enemy battery and obtained a detailed map of German defenses stationed along Utah Beach. Following Normandy, Winters and his men fought across Europe, including the Holland Campaign and the Battle of the Bulge, during which they held their place until the Third Army was able to break through enemy lines. Following the Battle of the Bulge, he was promoted to major. 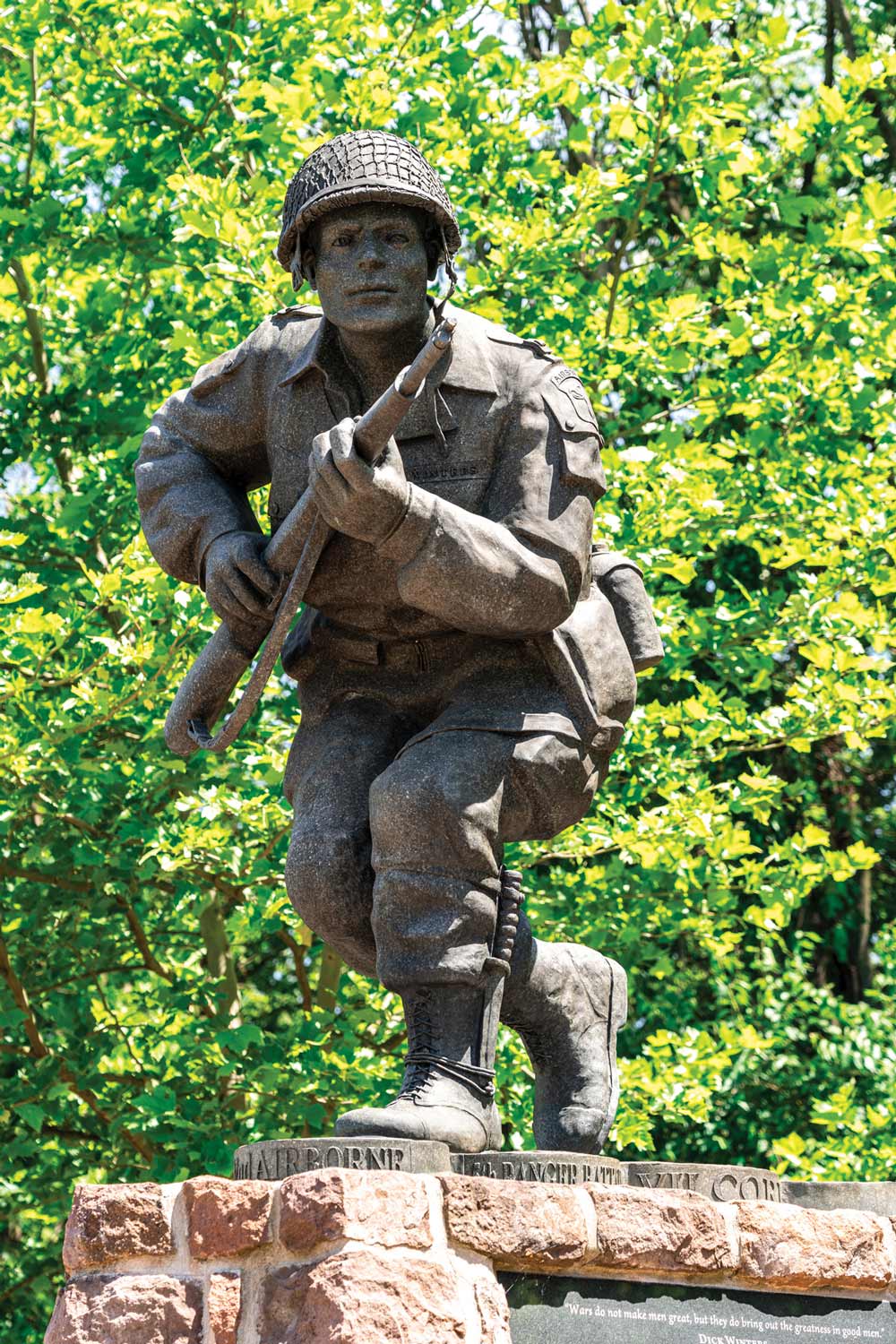 After Germany’s surrender, he remained in Europe as part of the occupation and demobilization process. He separated from the Army on November 29, 1945, and eventually settled in Hershey, where he realized his dream of buying a farm, and went on to become a successful businessman.

Winters’ war-time experiences, which he documented in diaries and letters he wrote home, became public knowledge in 1992 thanks to the Stephen Ambrose book, Band of Brothers. Winters’ wife, Ethel, whom he married in 1951, helped him prepare for his sessions with Ambrose. The book was optioned by actor Tom Hanks and director Steven Spielberg, who created a miniseries that aired on HBO in 2001. English actor Damian Lewis portrayed – or as he prefers to say, “represented” – Winters. The series received 13 Emmy nominations, winning seven awards including Best Miniseries. Band of Brothers also received multiple Golden Globe nominations, winning Best Miniseries in 2002. Winters’ own memoirs, Beyond Band of Brothers, were published in 2006.

Winters died on January 2, 2011, at the age of 92. In the days following his death, millions of comments were posted to the Band of Brothers Facebook page. He was buried in the cemetery at Bergstrasse Evangelical Lutheran Church in Ephrata, where his gravesite is visited from people from around the world. Tokens of respect are often left behind.

Winters’ death didn’t quell interest in his story. On June 6, 2012, the Richard D. Winters Leadership Monument, which was spearheaded by the World War II Foundation, was dedicated on a causeway near Utah Beach in Normandy. The statue that tops the monument bears a resemblance to Winters, who agreed to the honor only if the monument was dedicated to the junior officers who played critical — and often unheralded — roles in the war.

In Winters’ hometown of Ephrata, the artist who created the Normandy monument, Stephen C. Spears, offered a way to honor him in the United States. In keeping with Winters’ desire to honor all veterans, a committee of local community members worked together to build Veterans Plaza with the Winters Leadership Memorial as its centerpiece. The statue is a replica of the one Spears created for Normandy, making it possible for people who don’t have the ability to travel to France, to experience this moving monument.  Inspirational quotes and informational plaques surround the plaza. Bricks were sold to raise funding and are inscribed with the names of hundreds of veterans dating all the way back to the Revolutionary War. The project was funded entirely by private donations from across the United States.  It was dedicated on May 25, 2015.