Time spent together may be the one gift everyone will remember.

If your home is anything like mine, Santa Claus (or his theological equivalent) does a pretty good job of making sure my children get what they want more than what they need. There are also the aunts and uncles, grandparents and doting best friends who spoil my kids rotten. By the time the end of the year rolls around, my house looks like the inside of a giant claw machine with colorful boxes, plush animals and games of all sizes occupying every inch.

As this has happened year after year, we’ve come to a realization: Spending some quality family time on an adventure – especially over the holidays – can last longer than any trendy piece of plastic. We’ve done Segway tours of Washington D.C., trips to Baltimore’s Inner Harbor and National Aquarium, and staycations close to home. As we’ve discovered, Lancaster County has a great selection of memory-making locations. And, we’re just a short car ride away from Philly, New York, Baltimore and DC. 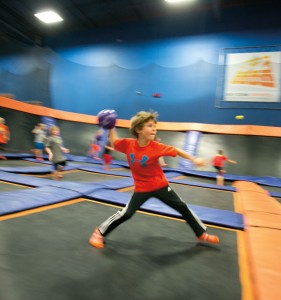 It’s no secret Lancaster now has a Sky Zone. The chain of indoor trampoline parks opened in the Greenfield Corporate Center last summer, and people have been talking about it ever since. I took this opportunity to check it out on my own.

The 28,000-square-foot indoor park consists of bouncy dodgeball courts, basketball hoops for spring-assisted dunking, and a general bounce area giving the option to fly into a sea of foam blocks. Angled trampolines allow friends to ricochet off the walls … all while being safe. Safety is emphasized at Sky Zone, and everyone who enters must complete and sign a valid Sky Zone waiver. Court monitors encourage guests to jump with people of similar age and size and master the fundamentals of a single trampoline before moving onto advanced skills like aerials or flips. All good things to know!

One of the most important things I learned is that a trip to Sky Zone is a workout. The company prides itself on being inventors of “fun fitness” and even offers classes like SkyRobics several times per week. Open Jump gives visitors full access to all Sky Zone activities, including the Main Court (free jump), the Foam Zone (freestyle jumping into foam), Ultimate Dodgeball and SkySlam. Open Jump is available during normal operating hours, and costs vary on how long someone wants to jump. Prices start at $12 for a 30-minute jump. 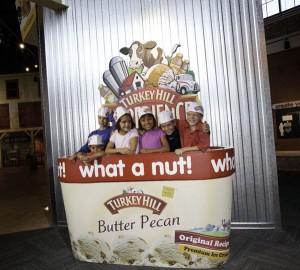 I practically grew up on Turkey Hill Iced Tea – back when there was one flavor and it came in a cardboard container – and thought it was quaint the first time I saw “Imported from Lancaster County” on a Turkey Hill Dairy product. Now people all over the United States know – and love – Turkey Hill products.

The company even has its own theme attraction. Part museum, part family fun center, the Turkey Hill Experience lets visitors learn every aspect of a dairy farm – without getting messy. Kids can milk mechanical cows, create a virtual ice cream flavor, and even star in a Turkey Hill commercial. The newest addition to the experience is the Turkey Hill Taste Lab, where visitors can make their virtual flavor a reality (reservations required). 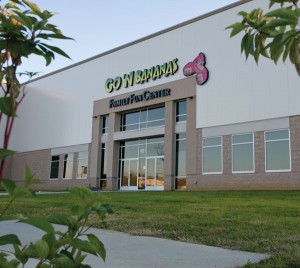 Lancaster’s newest attraction, which is tentatively slated to open this month, is the monkey-themed Go ‘N Bananas, a family fun center with tons to do. The massive space is separated into six locations where kids (and adults) of any age can find something they will enjoy.

Switching to a chillier theme, adventurers can check out the Arctic Zone, where team-building fun can be had on the massive ropes course or at mini-bowling. Go ‘N Bananas says it’s “all the fun of bowling in a fraction of the space.” Guests 42 inches or taller can ride the Spin Zone bumper cars – they’re shaped more like flying saucers than traditional cars!

For the little ones, there’s Toddler Zone, which is located in the Discovery Forest. Go ‘N Bananas aimed to create a visually exciting, safe and fun adventure playground for the toddler set.
For the big kids looking for serious, competitive fun, Urban Quest takes laser tag to another level by utilizing 3,800 square feet of space filled with a two-level arena of haze-filled and black-lit obstacles.
Pricing at Go ‘N Bananas varies by activity, but Nano’s Deluxe Pass can be purchased for $29.99 and includes entry to all attractions, a $5 game card, and unlimited time in Ballocity. 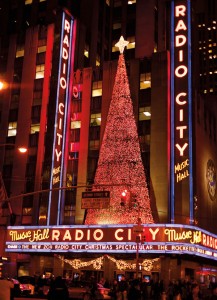 For those who want to schedule a holiday getaway, there is no place like New York! That’s where we’re heading for family-bonding experience this year. My wife has been itching to see the Radio City Christmas Spectacular ever since we considered having children, and we figure now is the perfect time (with their ages being 6 and 10).

Radio City’s legendary dance troupe, The Rockettes, presents one of the most recognizable moves – their signature leg kick – in all of dancing history. Over the past two years, the show has incorporated new content while preserving its traditions. In 2013, the show introduced a new finale featuring GPS-enabled snowflakes. Last year the show presented a re-imagined “Rag Dolls,” a classic dance number from the 40s. (Santa’s North Pole toy factory serves as the setting for the tap routine, which features the Rockettes as rag dolls come to life.)

I’ve driven in the city before, and it is not as bad as depicted on television; however, this comes from the guy who drove the wrong way on Broadway in a moving van in the middle of the night! So, we’ve opted to take Amtrak, leaving the Lancaster station on a Friday and staying in the city for a Saturday show. The charm of train travel and the sights of the decorated city will make for one merry Christmas indeed! 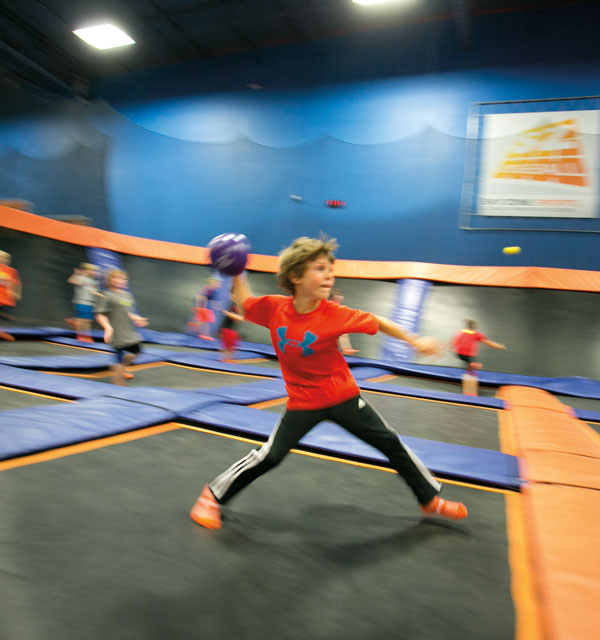