Rollin’ Into the Future of Bicycles
Search
October 9-13
The fairgrounds are located at 400 Adele Avenue, while food stands are located along the avenue in the vicinity of Manheim Central High School and Veterans Memorial Park.
Admission and parking are free.
Details: Manheimfarmshow.org

Manheim’s present-day Farm Show was launched in the early ’50s, when the Community Farm Show Association was reorganized (for a second time). According to the book, Manheim Revisited, the tradition of holding a Farm Show in Manheim dates to the 1920s when it was first held in the basement of the Waughtel Moving Picture House on West Ferdinand Street. Two years later, large tents set up on Market Square played host to the show.

The show disbanded for several years, but returned in 1931 under the leadership of Ammon H. Bucher. For the next 10 years, the show operated out of tents on Market Square and on properties owned by local businesses. Amusement rides were added to the event during this period.

After reorganizing in the ’50s, the show continued on Market Square, as well as at the Fire Hall, Scout Hall and on property owned by Spahr’s Garage. The focus of the fair returned to showcasing animals, arts & crafts, sewing, cooking and baking projects, and farm-related equipment.

Today, the association maintains fairgrounds that are located between Manheim Central High School and Chiques Creek. The location has its challenges. In 2011 Tropical Storm Lee caused the Chiques to overflow its banks and deposit up to 4 feet of water in the fairgrounds’ buildings. Volunteers spent the next month cleaning and readying the buildings for the fair, which went on without a hitch. Prior to the fair, the association gave back to the community by welcoming the borough to use the property as a distribution center to aid those affected by the flooding.

Two years later, flooding overwhelmed Manheim, causing many fair activities to be relocated or canceled. But, Manheim vowed to forge on. The good news is that the fairgrounds continue to grow and improve. A new Exhibit Building was completed in 2013 and this year, a remodeled and enlarged Champions Arena is set to make its debut.

As in other communities, volunteerism is what drives the success of Manheim’s fair. But, even before the fair gets underway, fundraising is ongoing through such events as a chicken barbecue and a golf tournament. During Fair Week, volunteers donate an estimated 5,000 hours to their hometown event.

Food stands, which are operated by civic and community groups, generated nearly $110,000 last year, all of which was redirected back to the community.

One such stand is operated by the Farm Show Committee, whose expertise is French fries. In the days leading up to the fair, volunteers peel 6 to 7 tons of the freshly dug spuds that are donated by Walnut Run Farms. They are hand-cut at the stand in order to ensure freshness. Earl Moyer, who has volunteered for the effort for 50 years (and chaired it for a large chunk of that time before “retiring” in 2015), shared the following observation with Rochelle Shenk (for the Lititz Record Express): “That’s what makes them so good. Plus, we do our fries the old-fashioned way – we fry them in lard.” Nearly 200 volunteers are involved in keeping fairgoers plied with fries. Through their efforts, as well as those of other ag-minded groups, $240,000 was raised for 4-H and FFA projects last year.

Of course, fries and milkshakes go hand-in-hand at a fair. In Manheim, the stand to hit for a shake is operated by the Manheim Brethren in Christ Church. Last year they sold more than 14,000 milkshakes!
While Manheim Young Farmers don’t operate a food stand, they do make a significant contribution to the Manheim Food Pantry by conducting a food drive during Fair Week. The food pantry and the Central Pennsylvania Food Bank also benefited from the 2,000 pounds of meat that were donated to them through the Youth Livestock Sale.

The fair is also deeply rooted in tradition. A queen is crowned Monday night, and baked goods are auctioned a night later. There is a parade Wednesday evening and a livestock auction Friday.

Innovation helps to keep the fair a vital part of Manheim. Last year a theme-basket competition and auction made its debut. Cooking demos were also held. Chainsaw artists were in action. And, the Children’s Farm Show has proved to be very popular with the youngest attendees as it provides an entertaining way to explain the farm-to-fork process. 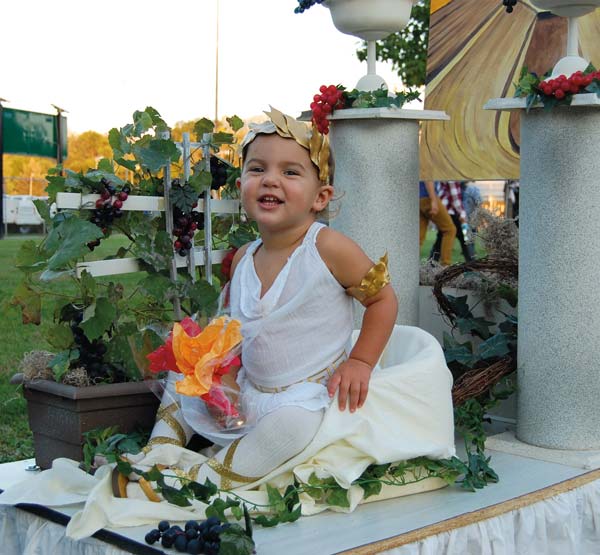