Manheim Twin Kiss has been a favorite destination for families, first dates, sports teams and ice cream lovers since 1952. 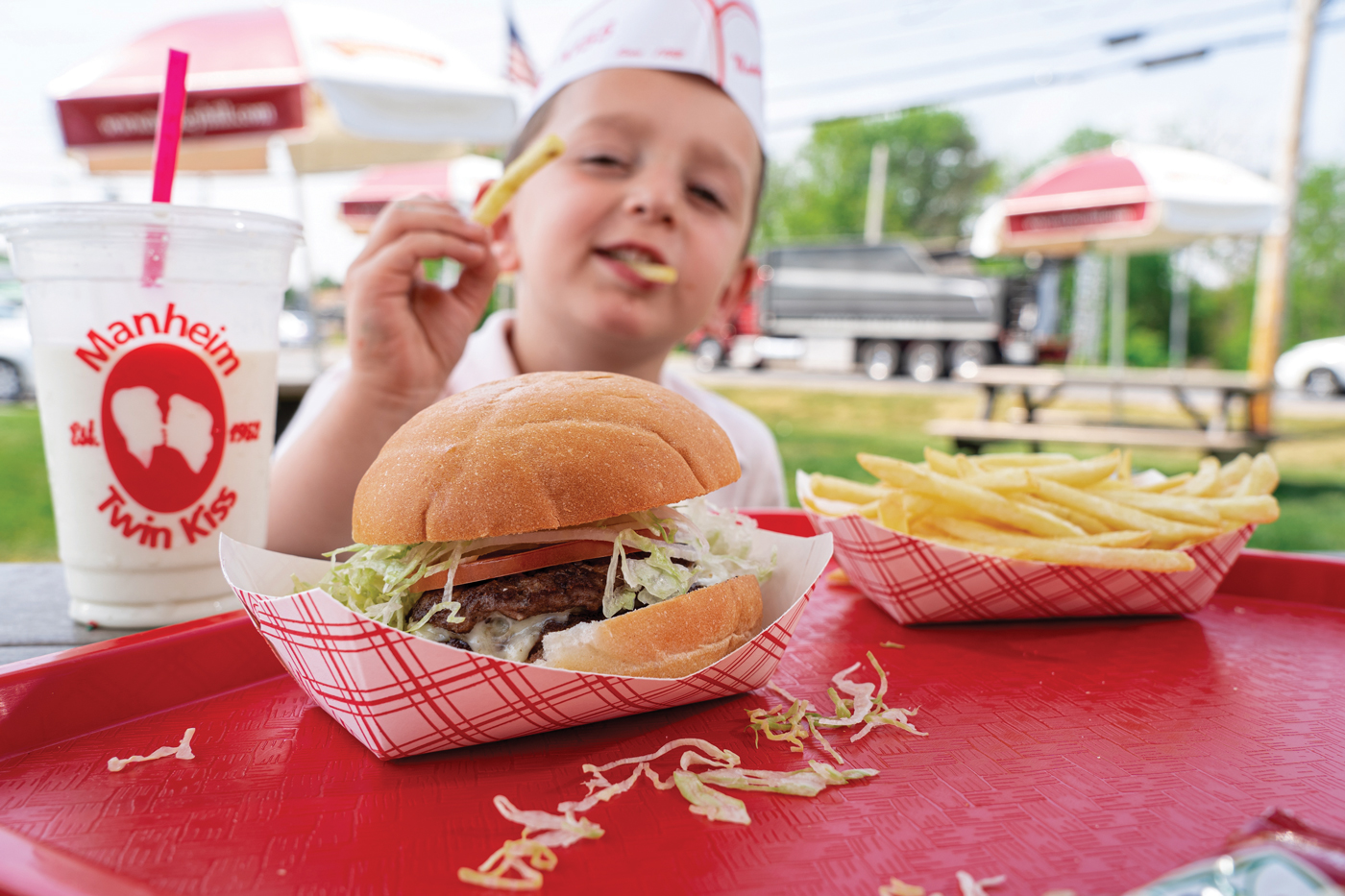 The quintessential summer indulgence: a burger with all the fixings, French fries and a milkshake.

Jennifer Rettew Bushey, who represents a third generation of ownership at the Twin Kiss, is especially proud of the family aspect of the business. “I grew up in the business,” she recalls. “When I was a little girl, I helped by washing the trays that people used to pick up their food orders.” Twin Kiss manager, Mark Murr, is almost family – he has been with the business for nearly 30 years. For countless  generations of teens, the Manheim Twin Kiss has been a home away from home, as many got their first jobs there.

The Twin Kiss also holds a soft spot in the hearts of many Manheim residents, as it’s been the scene for quite a few first dates and subsequent anniversary celebrations. “We’ve had people come back to celebrate the anniversary of their first date or mark other special occasions they had here,” Jennifer says with a smile.

As for its history, Manheim Twin Kiss was started by Chet Ruhl as a seasonal business selling ice cream. Jennifer’s grandfather, Ned Rettew, who was a teacher, worked in the business over the summer; he became a part-owner in 1959. “It was originally an ice cream stand – a drive-in where people would order ice cream at the window and take it back to their cars and eat it,” Jennifer explains. “A few years later, someone began selling food at a small stand beside it. Over the years, the stands were joined together and then enclosed. We have old photos on the wall inside the restaurant showing the evolution.” 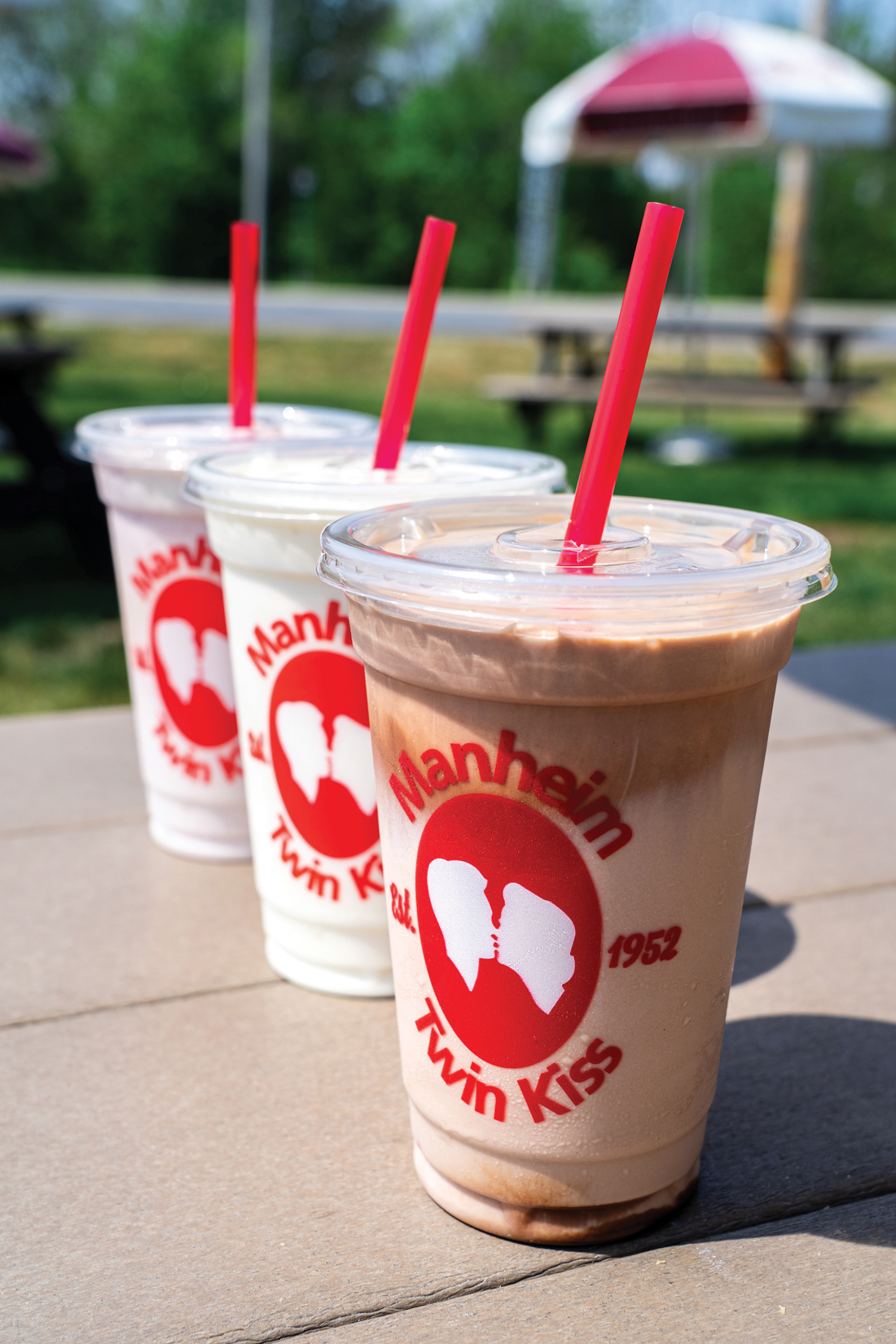 Jennifer’s father, Bruce Rettew, joined the business in 1973 and eventually took over ownership. He made a number of changes including the addition of a dining area and an enlarged kitchen.

Jennifer, who earned a degree from Penn State University in hotel, restaurant and institutional management, and her husband, Steven Bushey, who is from Califon, New Jersey, and is a graduate of the Culinary Institute of America, became its owners in 2019. One of the first things they did was add a drive-up window. “We wanted to make it more convenient for our customers. Last year, we were glad we had it – the drive-up window got lots of use during the pandemic,” she acknowledges.

Twin Kiss ice cream stands began to pop up all over America in the early 1950s. In Lancaster County, Twin Kiss stands could be found in Manheim, Mount Joy, New Holland, Elizabethtown and other locations. Manheim and Elizabethtown are the only two still operating.  According to some internet sites, Twin Kiss was the first to debut soft-serve ice cream. Twin Kiss is also regarded as the first to offer a vanilla/chocolate combo. Root beer was also a specialty of the house. “We’re known for our frozen mugs of root beer, as well as the ice cream,” Jennifer says. “The ‘Twin Kiss’ in the name refers to the combination of vanilla and chocolate ice cream that are swirled together on a cone and topped with the signature curlicue. When we serve cones or dishes, we make sure there’s a curlicue – it makes people smile to see that.” 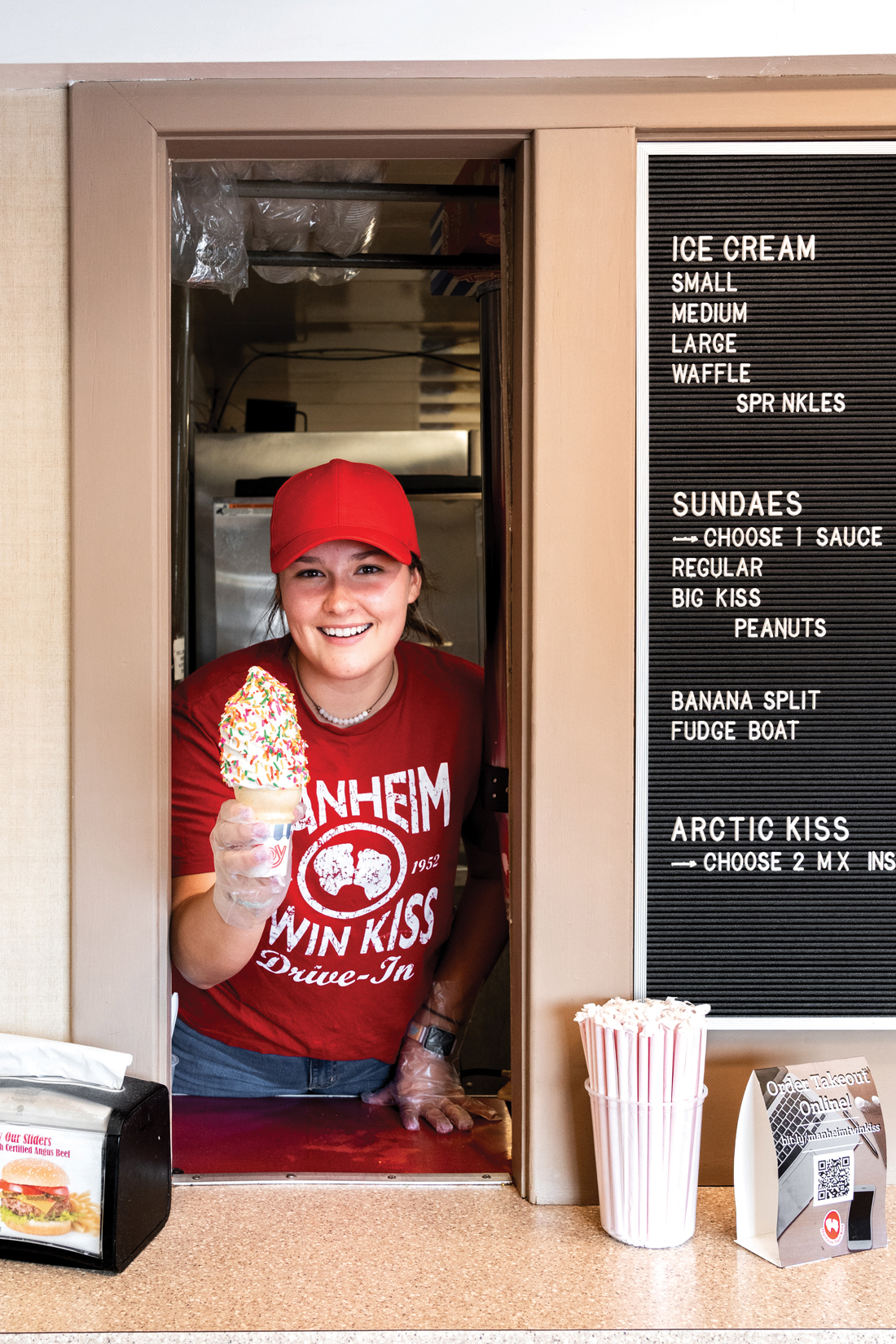 Other ice cream-related treats include milkshakes that are made with real ice cream (10% premium cream), floats (Pepsi, root beer and Orange Crush), banana splits, fudge boats and sundaes such as hot fudge, dusty road and CMP (chocolate, marshmallow and peanuts). “Our ice cream menu is like a trip back in time – we have all the favorites that delight today’s kids as well as their parents and grandparents,” Jennifer says. 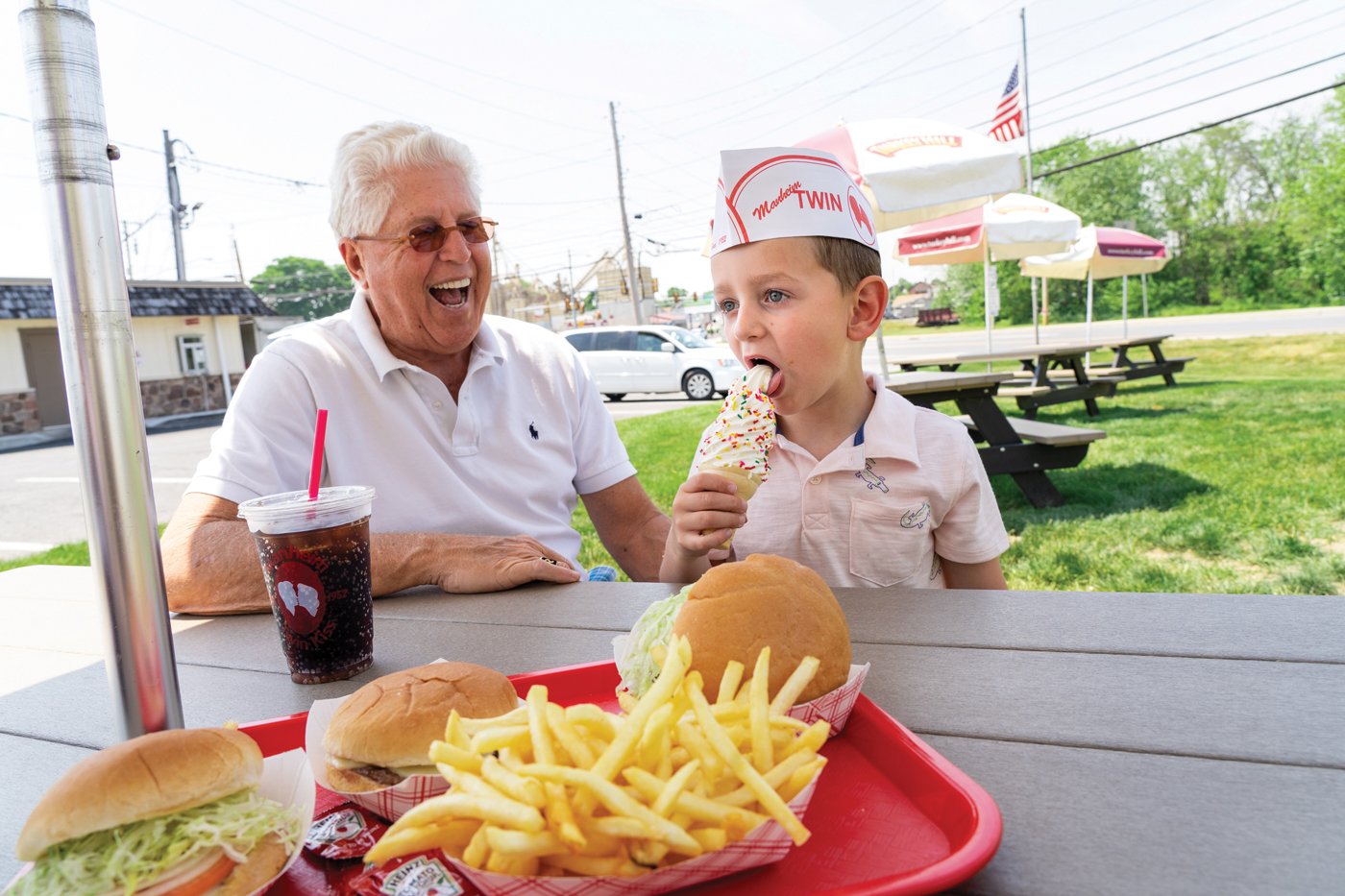 There’s also a catering side to the business – Rettew’s Catering. Jennifer says the catering business, which dates to the late ‘80s, was an outgrowth of the Twin Kiss. “People would ask my dad for food for their picnics and it just grew from that. Now we do a lot of weddings and corporate events,” she remarks. “We are professional caterers – we help clients think through their event and then execute it from start to finish.” Menu items are made with the freshest and finest ingredients and, as part of customer service, Rettew’s has a pastry chef on staff.

Jennifer and Steven recently launched a new venture. In May, they purchased Tony’s Mining Company Restaurant in Cornwall, Lebanon County. Open since 1974, the restaurant was known for its atmosphere (copper-topped tables) and classic menu. The restaurant closed in April due to the owner retiring. The Busheys’ initial plans include adding a patio or deck and designing a bistro menu. Other details will be finalized in upcoming months. 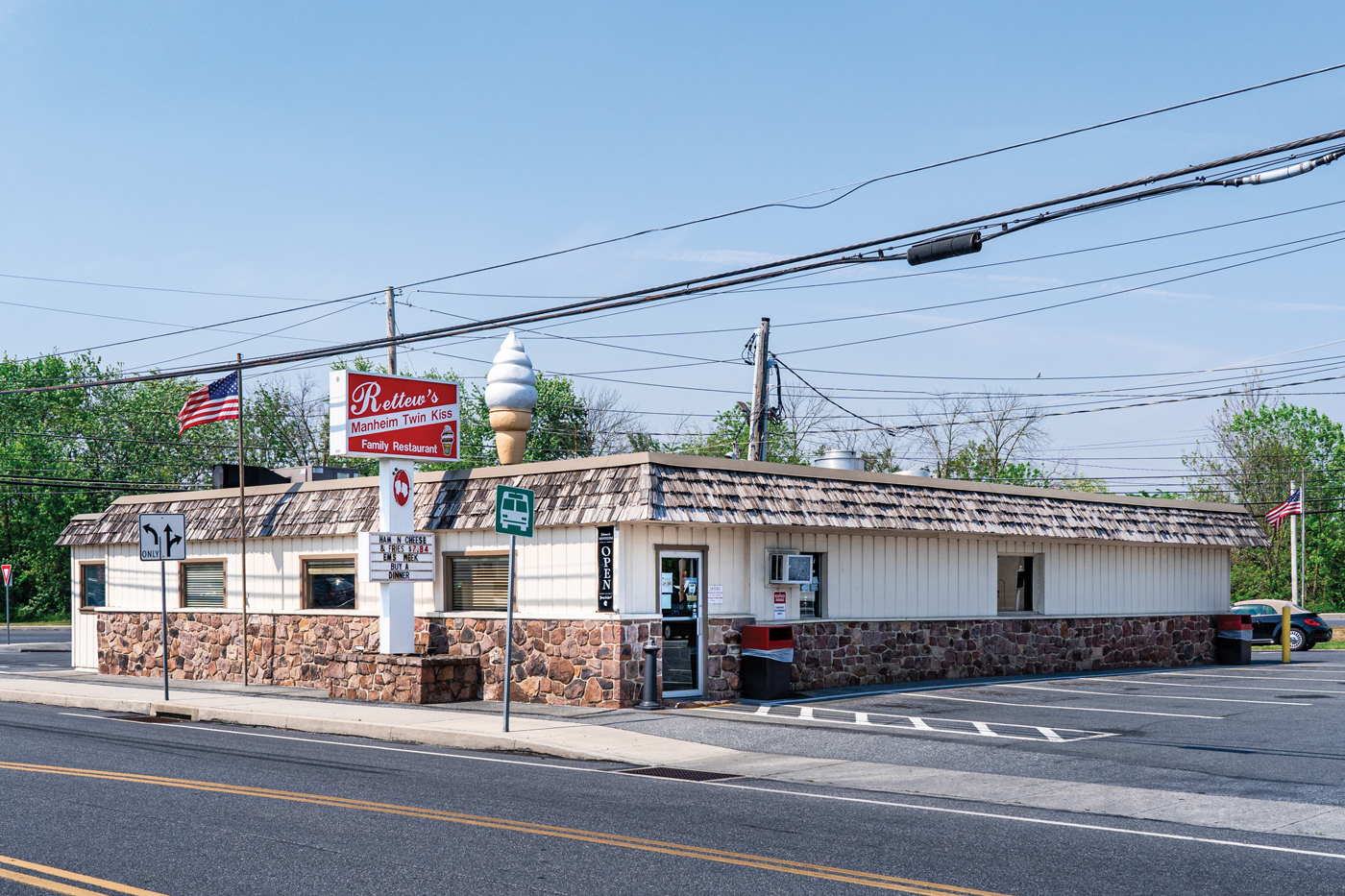 The Manheim Twin Kiss, which dates back to 1952, grew out of two seasonal stands that offered ice cream and food.

Manheim Twin Kiss is located at 309 South Main Street in Manheim. Hours are 10:30 a.m.-9 p.m., Sunday through Thursday, and 10:30 a.m.-10 p.m., Friday and Saturday. Take-out and party platters are available. Online ordering is available via manheimtwinkiss.takeout7.com. For more information, call 717-665-2897 or visit manheimtwinkiss.com and on Facebook. Information about Rettew’s Catering is available at rettewscatering.com.

The quintessential summer indulgence: a burger with all the fixings, French fries and a milkshake.