Historic preservation, adaptive reuse, a thriving restaurant scene and a new focus on the arts define this riverside town. 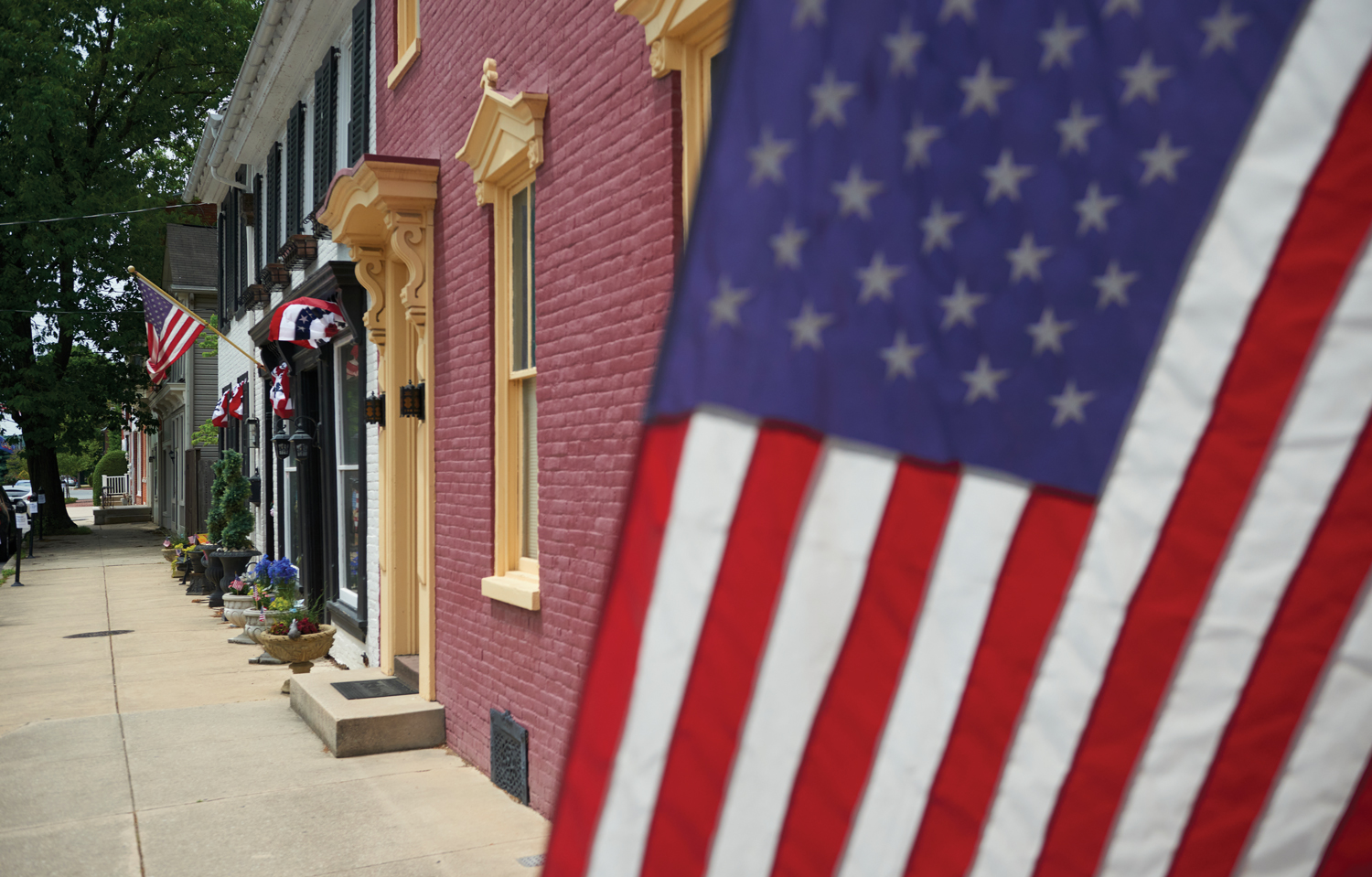 Marietta’s architecture is a work of art in itself! It endures thanks to residents, businesses and organizations that respect and revere historic preservation. The architecture is part of the reason for Marietta’s successful holiday tour of homes that is one of the oldest events of its kind in the state.

Upon buying the house at 264 West Market Street in 1919, Henry S. Hiestand made community the focus of its existence. Originally built in 1871 by Dr. John Huston, the house was sold four years later to Amos Bowman, a banker and entrepreneur. In 1909, Edith Gilliland purchased the property and transformed it into a sanitarium she named The Pines.

Upon buying the property, Hiestand and his wife renamed it The Marietta Community House. They also formed a corporation – using the same name – and dedicated both to the memory of their son, Lt. Benjamin Hiestand, a lieutenant in the United States Air Service, who was killed during a training session with a cadet in Florida. Dedicated on December 30, 1919, the goal of the corporation was “the promotion of the spiritual, intellectual, educational, social and physical welfare of men, women and children of Marietta.” 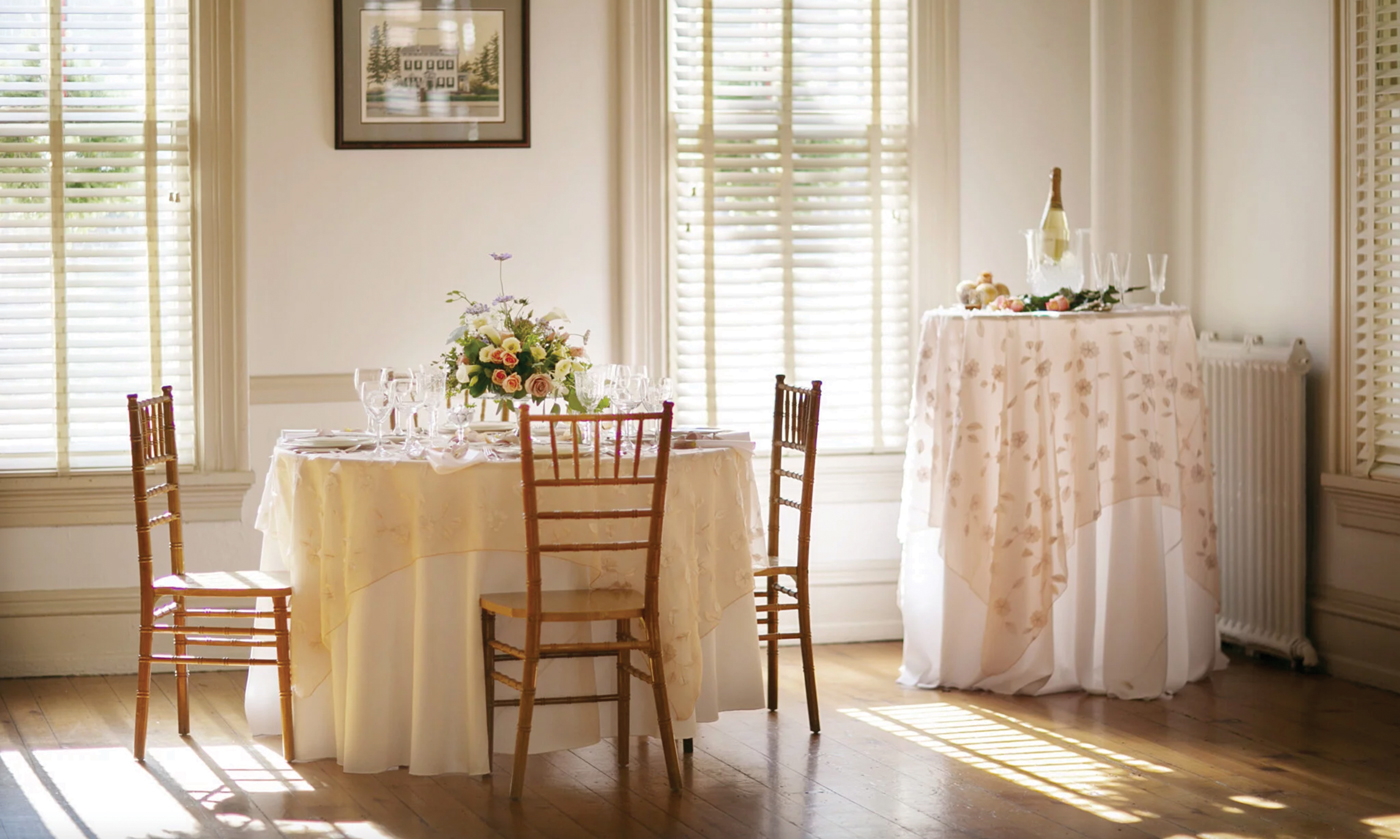 One of the organization’s first projects was building a gymnasium on the property. In 1920, townspeople gathered to launch the project by hand-digging a foundation for the building. Marietta High School utilized the gym until 1936. Since then, it has seen various uses, including serving as the home of Susquehanna Stage from 2008 to 2018.

Throughout the 20th century, The Marietta Community House met the needs of the community. From the ’30s to the ’50s, it was home to a well-baby clinic. During the Depression, it functioned as a soup kitchen and coal distribution center. When flooding occurred, the Red Cross arrived to set up a command center on the property. It became a meeting place for clubs, nonprofit organizations and youth groups. For a time, Community Bible Church held services there. It also served as a school for a time – the Pennsylvania School of the Arts (now Pennsylvania College of Art & Design) was headquartered there until 1982, at which time it moved to Lancaster.

The 21st century has seen The Marietta Community House once again adapt to the needs of the area it serves. A new emphasis has been placed on micro-weddings and other social events that require seating for 65 or less. While the venue dates to the Victorian era, the rooms for such occasions reflect the current trend of white walls and minimal décor, allowing for florals and linens to set the scene for the event. Get-ready suites and the house’s fireplace were also renovated as a result of the refurbishing project that was carried out in 2019-2020. “During the pandemic, the Community House Board approved of and worked hard to improve the amenities of the house,” Joy Persinger of Fancy Peacock Events shared via email. Joy was also brought aboard as the venue’s manager and is excited that the upgrades have proven to be a hit – events were booked throughout the spring.

She was also pleased by the “reception” that Make Your History in Marietta – a collaborative website of local venues and vendors – received during the inaugural Wedding Walk event that was held on March 27. Participants could tour venues in town, visit with vendors and win prizes. 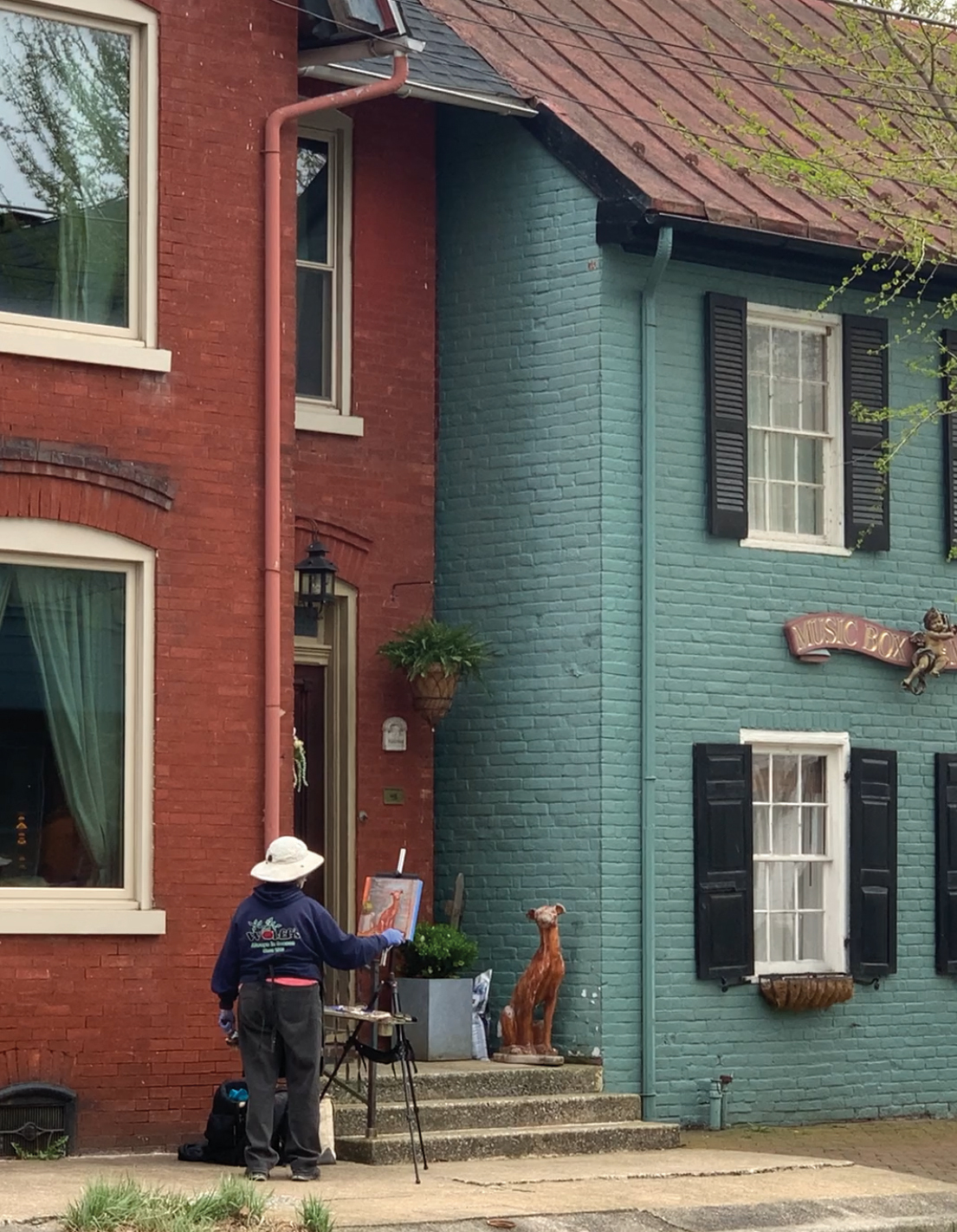 The reaction to Marietta Art Alive’s Plein Air event in April made organizers realize that the “draw” of the river appeals to both artists and art lovers alike. They will soon begin planning next year’s event. Photo by Kaylee Rex.

The former gymnasium has also been given a new lease on life. Now known as Studio 264, the refreshed interior was unveiled in late April when the Marietta Art Alive River Towns Plein Air art exhibit was open to the public for viewing. Members of the board that oversee The Marietta Community House perceive Studio 264 being used for a plethora of possibilities including fashion shows, craft/maker shows, art exhibits, educational classes, seminars, yoga/meditation … they are open to all suggestions.

In the meantime, The Marietta Community House is welcoming back popular fundraising events such as the dinner and auction that was held May 14 in Studio 264. Last month, the property served as the headquarters for the annual garden tour and a barbecue dinner.

Marietta Center for the Arts/Susquehanna Stage 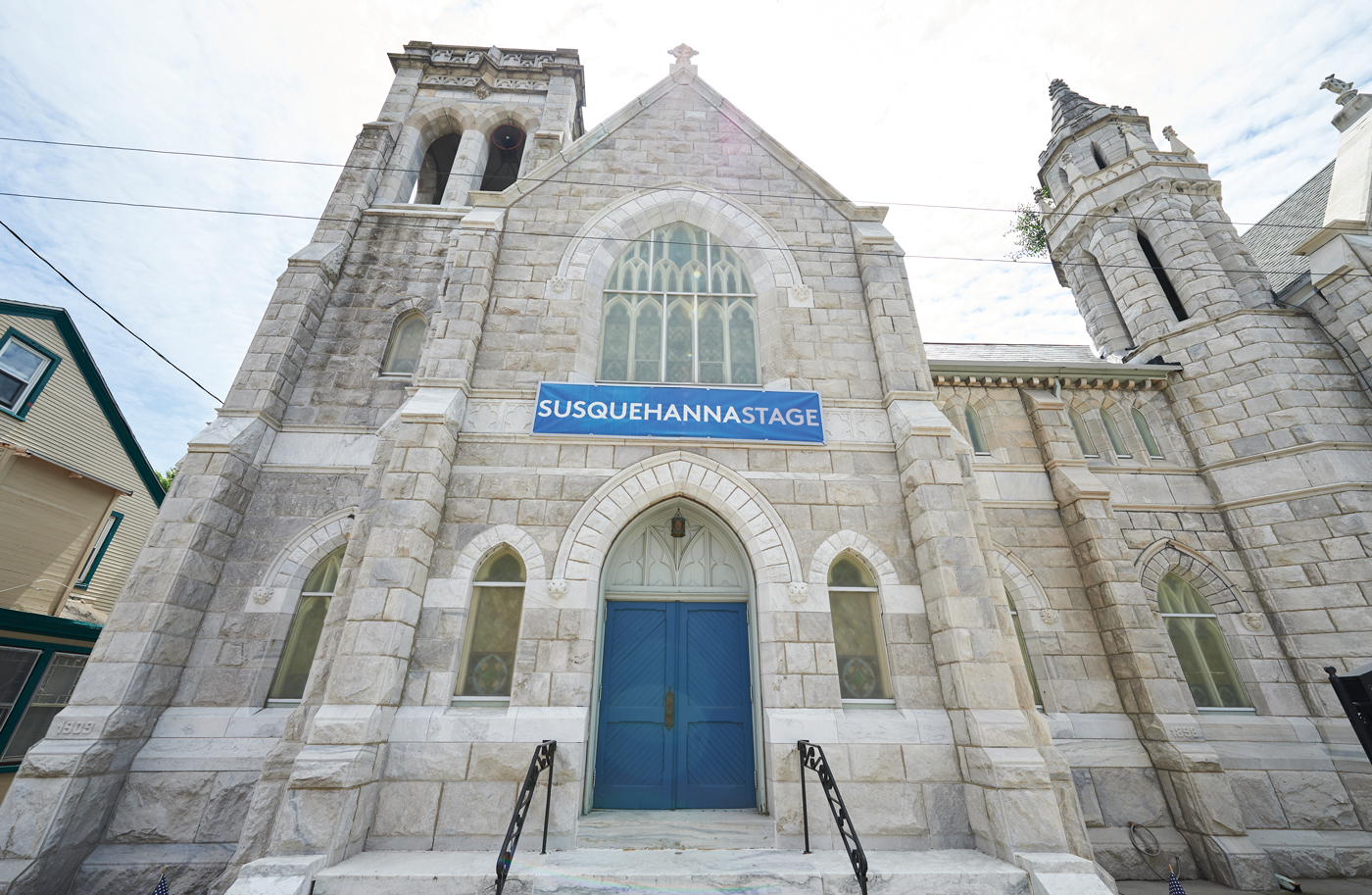 In 2018, Susquehanna Stage fulfilled its dream of owning its own theatre with the purchase of a vacant church building at 133 West Market Street.

Founded in 2008 by a small but enthusiastic group of theatre lovers who were intent on bringing community theatre back to Lancaster County, Susquehanna Stage made its debut in the former gymnasium that sat at the rear of The Marietta Community House. To their astonishment (and delight) the first production – The Music Man – was a hit. As productions grew more sophisticated, the public responded with donations and by buying tickets. The dream scenario was for Susquehanna Stage to secure its own building.

The dream became a reality in 2018 with the purchase of an empty church building on West Market Street that dates to 1853 and offers 12,000 square feet of space.

Now a part of an umbrella organization called Marietta Center for the Arts (MCA), Susquehanna Stage presents plays and musicals in Eater Theatre, the main stage that was named in honor of the Eater Family Foundation, which generously donated to the effort. A smaller theatre, the Gallery Stage, hosts events such as open-mics, live music and staged readings.

The lower level of the building holds a sewing room, storage for costumes and props, dressing rooms and classrooms. Spaces for private events are also available.

Education is also a key element of MCA. The expanded space now allows them to offer classes and workshops for adults, as well as activities for children, including camps in the summer.

The balance of this year’s lineup includes the following productions:

One of the longest-running shows on Broadway, Cats, with music by Andrew Lloyd Webber, won seven Tony awards in 1983, including Best Musical.

The Tony Award-winning psychological drama tells the story of a novice nun who gives birth to a baby and the psychiatrist and mother superior who clash during the investigation into the mystery.

The pop-culture phenomenon and Tony Award-winning musical focuses on falling in love, finding your voice and living for today.

All the Way by Robert Schenkkan

The play focuses on Lyndon Johnson’s efforts to achieve passage of the Civil Rights Act of 1964.

Presented by Teatro Paloma, Lancaster’s Latinx Theatre, the play tells the story of Lucia, a Mexican-born novelist who is offered a job on the set of a male-dominated television show. The only welcoming face belongs to Abel, who is the janitor.

Through learning the basics of musical theatre, campers will stage a musical for friends and family at the close of the session.

Thanks to the efforts of six women – Marianne Calenda, Melissa W. Carroll, Susan D. Darling, Marita Hines, Joanne McIlvaine and Linda Mylin Ross, who are collectively known as Marietta Art Alive – 60 artists from five states were painting up a storm from April 18-27. The event Marietta Art Alive sponsored, River Towns Plein Air, saw the artists fan out across the area to create paintings that captured the play of sun and shadows on the architecture of the river towns or the riverscape, essentially capturing a moment in time with paint. Another event, which was held on April 23, was called Quick Draw. Open to all artists, it was held in Marietta and the challenge was to finish a painting in under two hours. The following day, a family-oriented event saw children learn the nuances of the Japanese technique of “fish painting.” 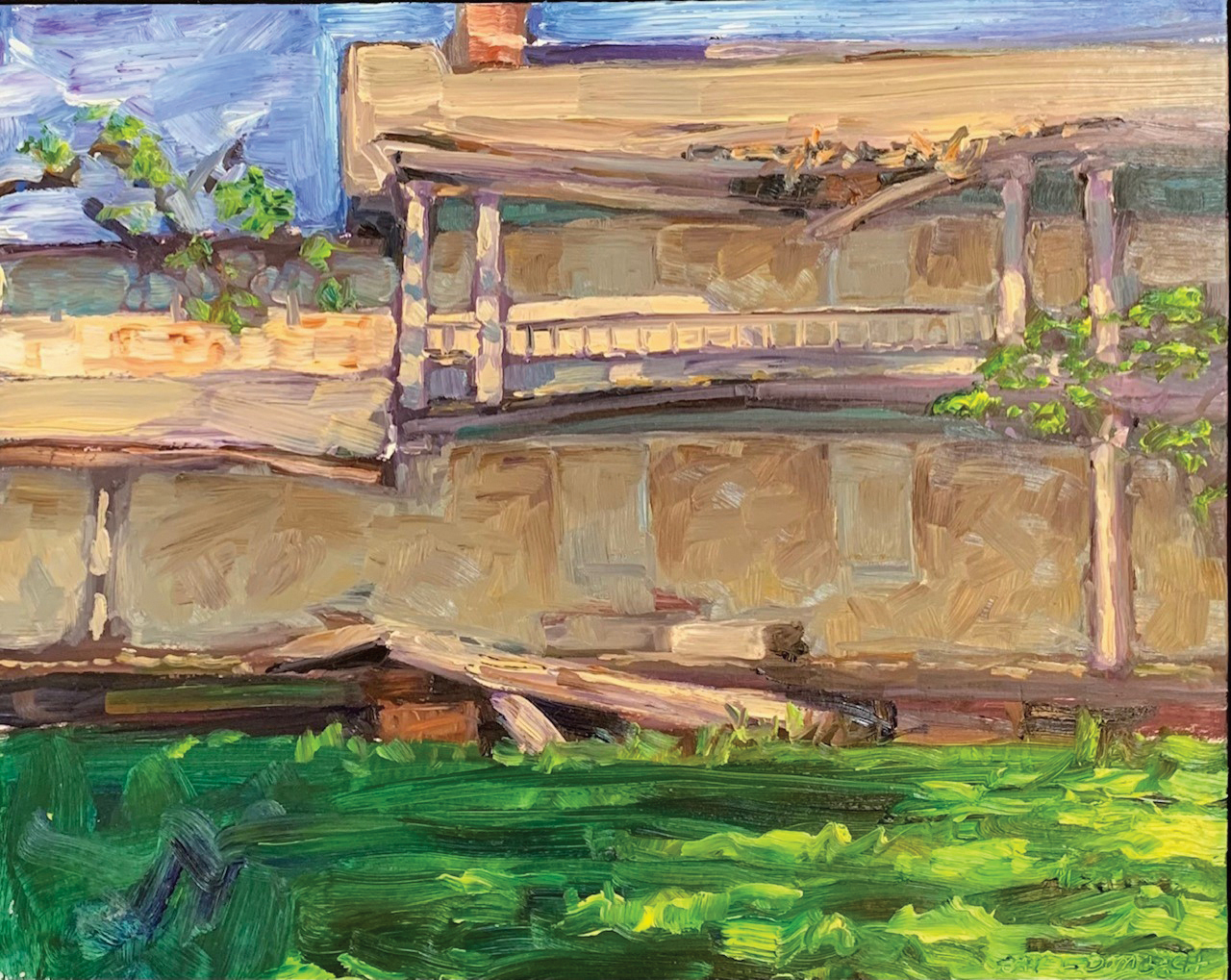 At the conclusion of the sessions, Marietta Art Alive staged a three-day exhibit of 323 paintings at Studio 264. The sale of the art on display benefitted The Marietta Community House and Rivertownes PA, USA. In reflecting on the event’s success, Linda Mylin Ross noted, “The Susquehanna River has always been a mecca for artists.”

The members of Marietta Art Alive are all accomplished artists who love to share their passion for art with others. Member Marita Hines remembers meeting at what is now Molly’s Courtyard Café in 2019 with a group that also included a business owner and other Marietta artists in hopes of starting a co-op. She shared in an email: “Our initial interest in forming an artist co-op never materialized but the group, which consists of six artists, keeps the MH Gallery [42 W. Market St.] open two days a week and has worked with other organizations such as the Marietta Center for the Arts, Susquehanna Waldorf School, Pennsylvania College of Art & Design and the Demuth Foundation. In 2020, we became part of Rivertownes PA, USA, whose mission is to cultivate art, heritage and recreation in the river towns of Columbia, Marietta and Wrightsville. It seemed like a great fit and helped us to further our alliances.” 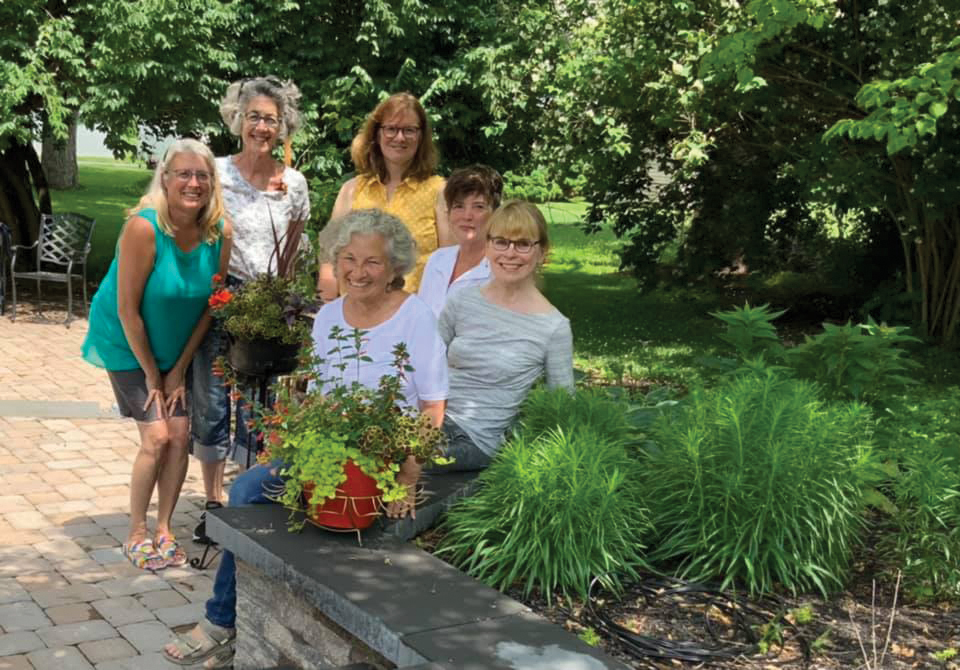 The success of the Plein Air event provided more than enough evidence that the public cherishes the river and feels a connection to it. Marita explained, “It was clear to the organizers that visitors to the final art show connected with the unique landscape portrayals on a personal level.” The group was also grateful to the residents (who hosted out-of-state artists in their homes) and businesses that supported the event. The visiting artists were also enthusiastic about the event, as well as the results – sales of art were brisk – and many asked if they could return.

The overwhelming response convinced the organizers that Plein Air #3 is in order. They will soon begin to plan next year’s event. “It was clearly the talk of the locals!” Marita reports. As the event takes shape, news will be posted to the group’s website.

Marietta’s architecture is a work of art in itself! It endures thanks to residents, businesses and organizations that respect and revere historic preservation. The architecture is part of the reason for Marietta’s successful holiday tour of homes that is one of the oldest events of its kind in the state.