The Stockyard Inn not only offers fine dining that’s perfect for special occasions, but it also offers a more casual experience that has been well-received by customers both old and new.

“We truly are a restaurant that offers both types of dining. There’s white linen for fine dining [in the Hunt and Crystal rooms], and also more casual dining in our bar and Silver Queen rooms,” says Athena Fournaris, one of the restaurant’s owners. “And, whether guests are seated in our more formal dining rooms or in the more casual area, they receive the same impeccable service and caliber of food.”
Consistency, high quality and attention to detail all play integral roles in the restaurant’s well-earned reputation. Familiarity is also key to the restaurant’s longevity. It’s also been a family-owned restaurant since 1952, when it was purchased by Jim (Jimmee) Fournaris. “We follow my dad’s philosophy and treat our customers like they’re family. If they have a special request, we do our best to accommodate it,” says  co-owner Tom Fournaris.

“We’re hands-on owners, and we hold ourselves accountable to the same standards that we set for our staff,” adds Jim Fournaris, the third generation owner who works alongside his parents, Athena and Tom.

The Stockyard also prides itself on another sort of longevity: the faces that customers see don’t change that often. Many of the staff have been with the restaurant for years, and some have served two or three generations of the same family.

History is yet another ingredient in the Stockyard’s success story. Athena says that first-time guests are always curious about its history. It’s believed the building that houses the Stockyard Inn dates back to 1750. It was built as a farmhouse, and notable architectural details include a wrap-around porch and the belvedere (or lookout) on the top. James Buchanan owned the property during his term as president. The restaurant’s name was inspired by the Lancaster Stockyards, which was founded adjacent to the property in 1895 and would grow to become the largest stockyards east of Chicago. While the land that was once home to the stockyards is being redeveloped, the Stockyard Inn continues its own tradition – and evolution – of memorable dining.

Each of the restaurant’s dining areas has its own décor. Named for its hunt-themed artwork, the Hunt Room seats 75 guests, while the Crystal Room, with its French doors, windows into the lobby and china-and-crystal-filled corner cupboards, seats 40.

The bar area, which was completely remodeled several years ago, features a black granite topped bar, Brazilian cherry floor and a few tables, which are original to the bar area. Located off the bar are two smaller and more casual dining areas known as the Silver Queen.

As for the cuisine, the emphasis continues to be on quality, fresh ingredients (most of which are locally grown) including vegetables and meat. As one would expect from the name, the Stockyard Inn is known for its steaks, which are hand-cut on the premises from USDA prime beef.
Jim says the dry-aged Delmonico steak is “something special.” He also points out that while the menu does include traditional items, such as prime rib, sometimes they’re done with a twist. The Cajun-style prime rib is one example. “I thought we’d try something different, and about half of the prime rib we serve is Cajun-style; it’s really been a hit with our customers,” he notes.

Specials are offered in both the dining room and bar on a daily basis. “The menu, especially in the dining room, doesn’t change much. We get creative with the specials and offer some fun sides,” Jim says. A children’s menu is available.

The restaurant is one of four in the county that’s a recipient of the 2016 Wine Spectator Award of Excellence. A number of wines by the glass, a broad selection of wines and a wide variety of martinis complement the dining experience. 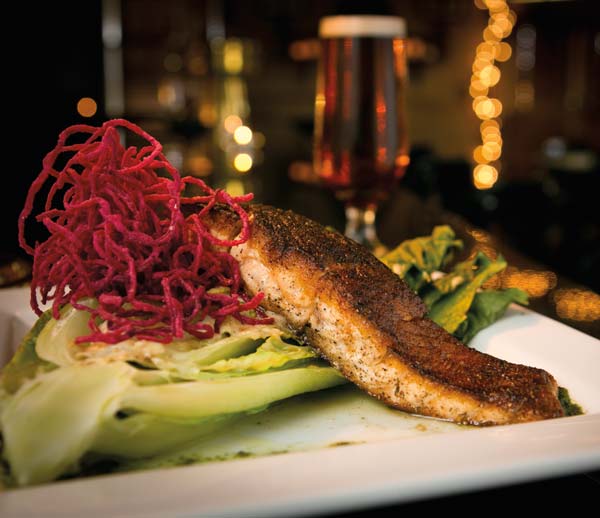 Blackened salmon is served with grilled romaine and deep-fried beets. The Stockyard once again earned an Award of Excellence from Wine Spectator.