November is prime time for mountain getaways – after all, it’s deer season and with it, male-bonding time! However, some high school buddies and I look forward to ascending into the solitude of nature – and eating to our hearts’ content – in the dead of winter, long after the crowds are gone. We fondly refer to our getaway as Men’s Mountain Weekend. 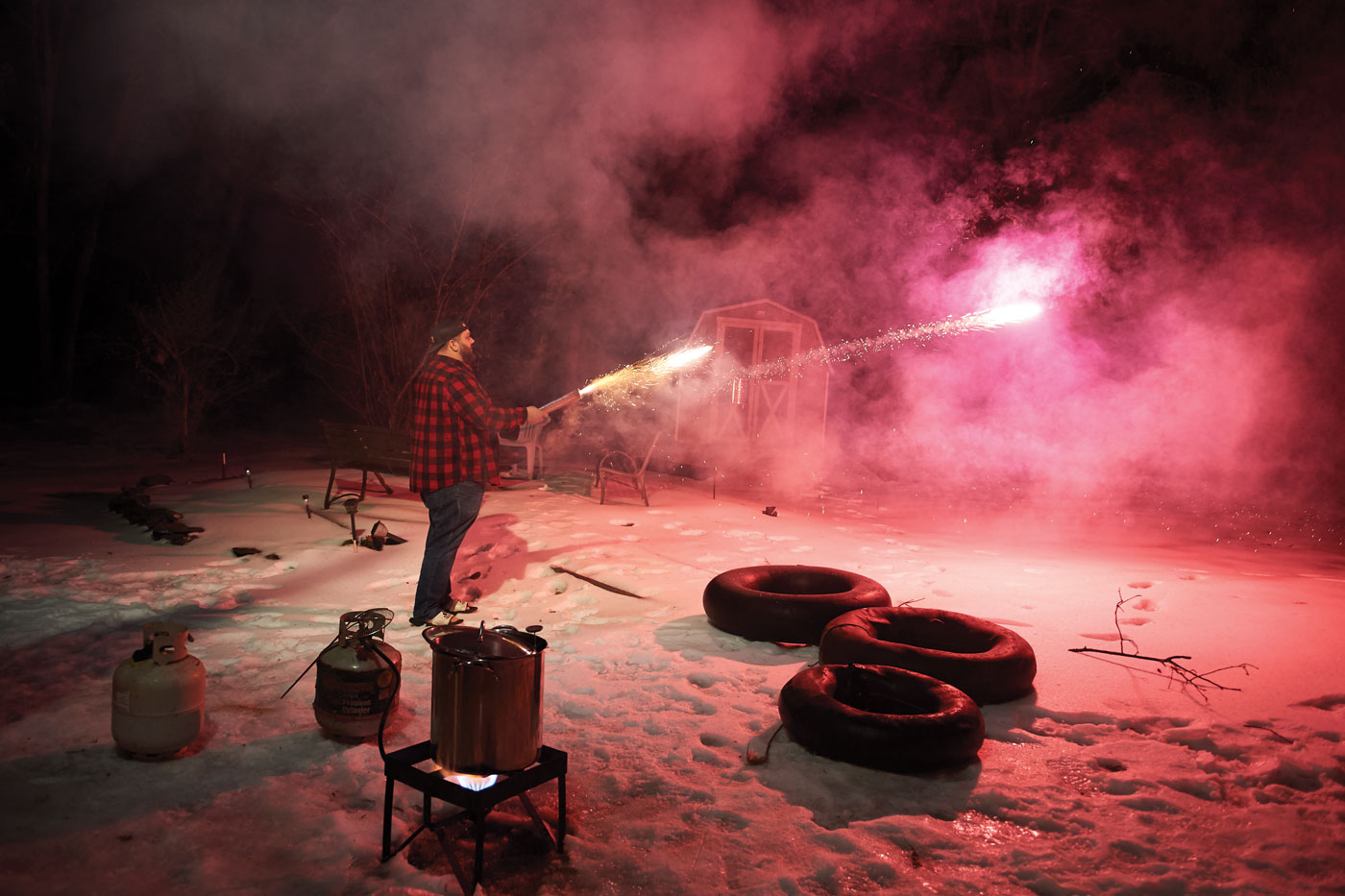 Josh Stoltzfus prepares chicken wings with a side of fireworks at the Martin family cabin in Blackwell, Tioga County.

Our winter excursions to Tioga County started during college. I don’t remember exactly how they began, but Derrick Martin (or likely someone else) volunteered his family’s cabin along Pine Creek. The Alpine, as it’s called, is a beloved spot; seasonal availability and winter break prompted us to schedule our now-annual pilgrimage after the holidays.

The Martins graciously continue to allow us to invade their mountain getaway. I hadn’t joined the trip in the past few years, so when plans started to come together for 2019, I decided to make it a priority to go along. Over time, the size of the group has diminished, thus making plans simpler. All of us are characters: good-hearted but sometimes comedic pains in the you-know-what.

Upon hearing that we’d meet at the Martin residence at 5:30 a.m. on a Friday, I thought it was a joke. For starters, this was 12 hours earlier than when I last made the trip. Second, not being much of a morning person, the joke wasn’t well-received, particularly when I found out it wasn’t a joke. Without naming names, certain individuals were given different arrival times in order to adjust for established tendencies on “timeliness.” 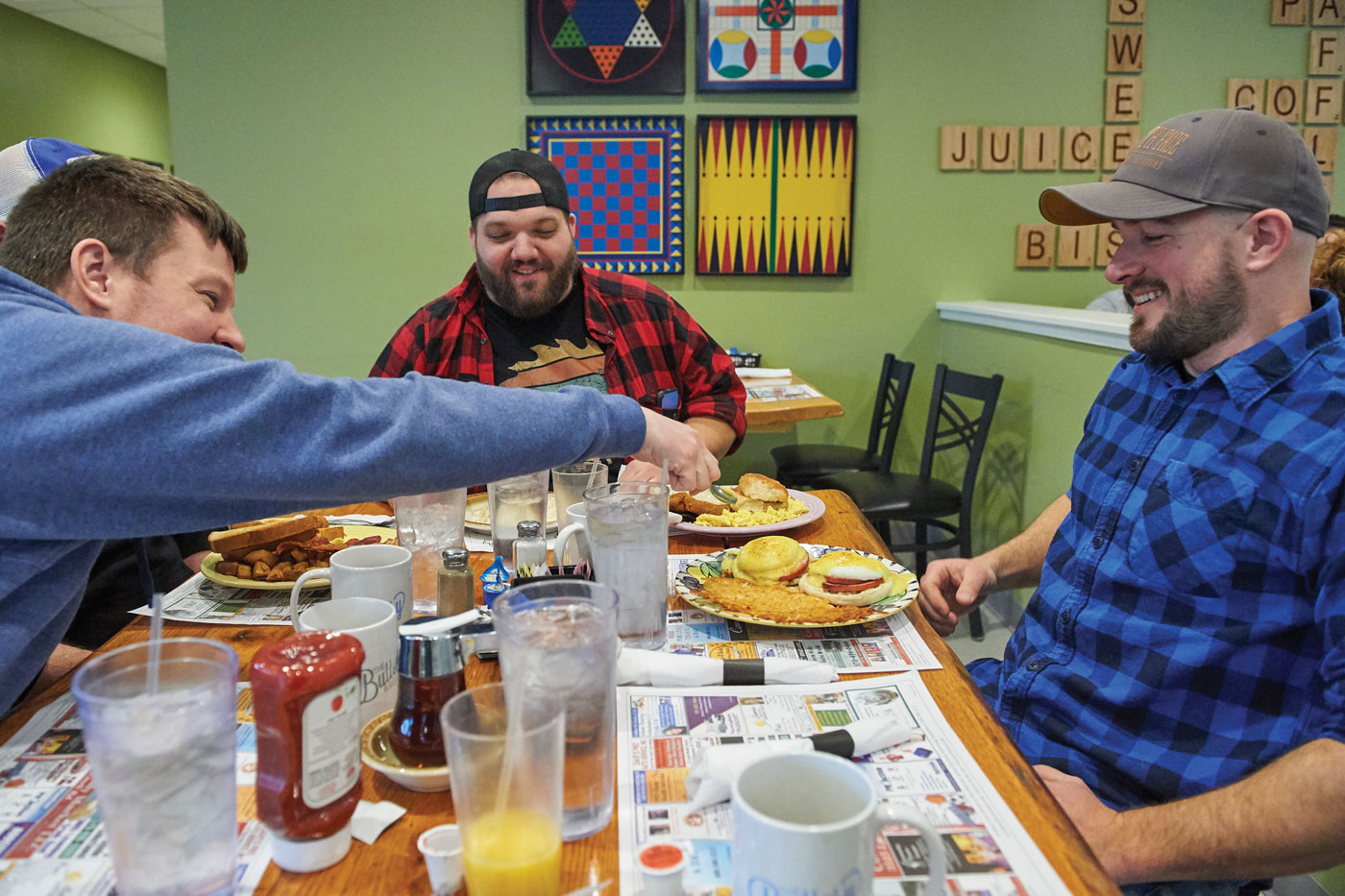 Derrick Martin, left, decides Jamie Weaver’s breakfast choices are superior to his at The Buttery Biscuit in South Williamsport.

When the day of departure arrived, we were all more-than-surprised to see Eric Musser’s Chevy Suburban loaded up and ready to connect with the turnpike at 5:54 a.m. I specifically remember that time because he mentioned it with such unexpected delight. I was further surprised to learn I drew the short straw and was destined to end up in the third row – all 6’3” and 240 pounds of me – holding my camera bag and a guitar case all the way to our destination, which is north of Williamsport. (Fortunately, on the ride home, I was rewarded with the shotgun seat.)

Once we arrive, the routine is always the same. After opening up the cabin and unpacking our gear in bucket-brigade fashion, everyone settles in. The water is turned on and a warm fire started. For a while, no one does much of anything, which is partly the point of the trip. Eventually, someone starts setting off mostly legal things that go flash and bang and the rest of us respond in kind. 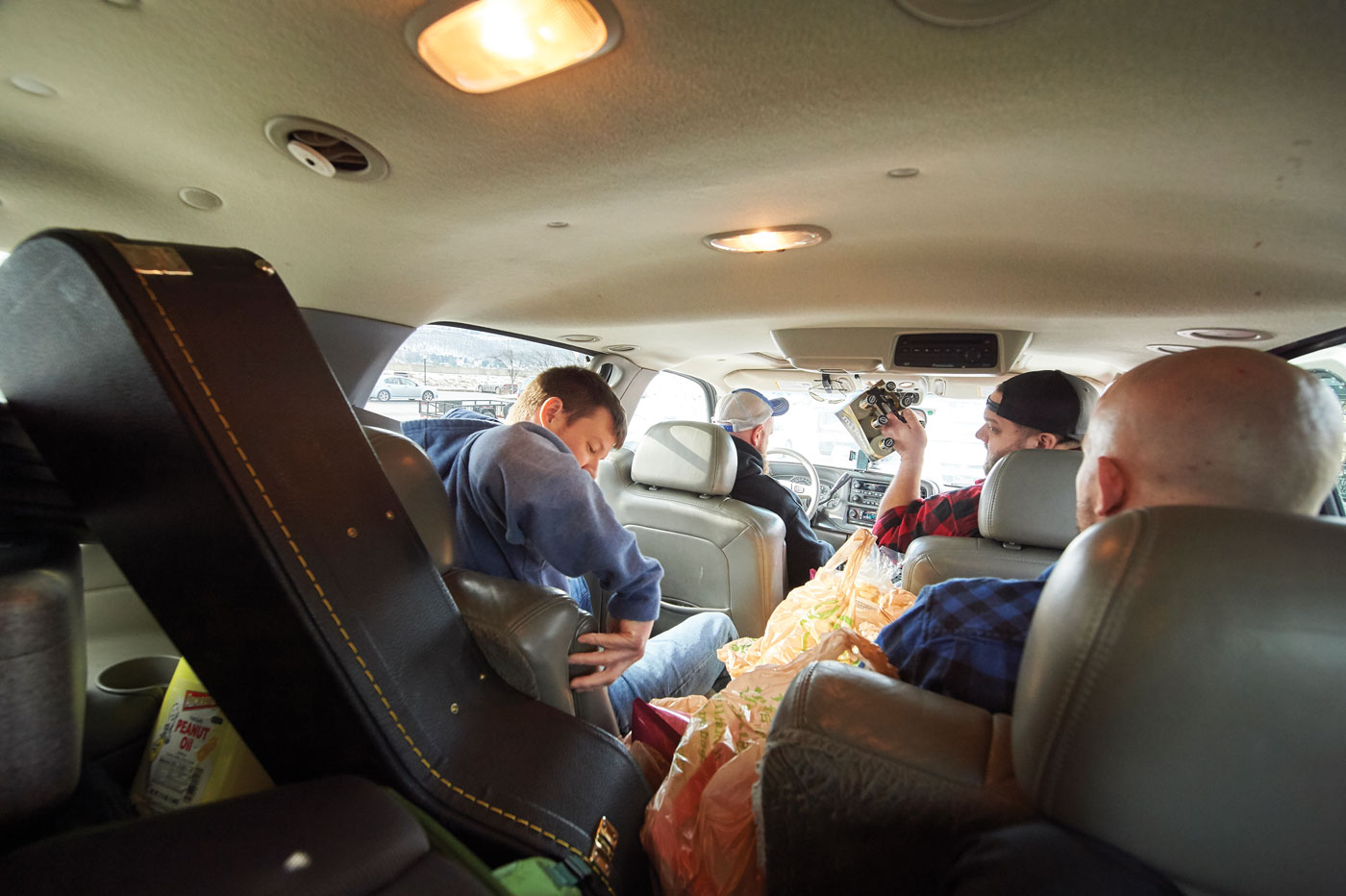 The view from the Suburban’s third row. With little room left over, the last 45 minutes of the trip require holding our groceries.

I usually bring a couple of books that I seldom touch until late at night, along with journals for writing. The others like to play the card game, Haus. Collectively, the group usually soon hatches a genius idea to go tubing behind the Suburban on unmaintained roads covered in a half-foot of snow. Did I mention the cell phone signal is poor? As college students, we wouldn’t have worried about sliding off the road in sub-freezing temperatures. As grown-ups, those sorts of things now occur to us.

On the side of an unnamed mountain, with an open view into other mountainsides and valleys, we’ll stop to take in the last rays of sunlight for the day as it glistens through the snowy trees. The scenery never fails to amaze us. 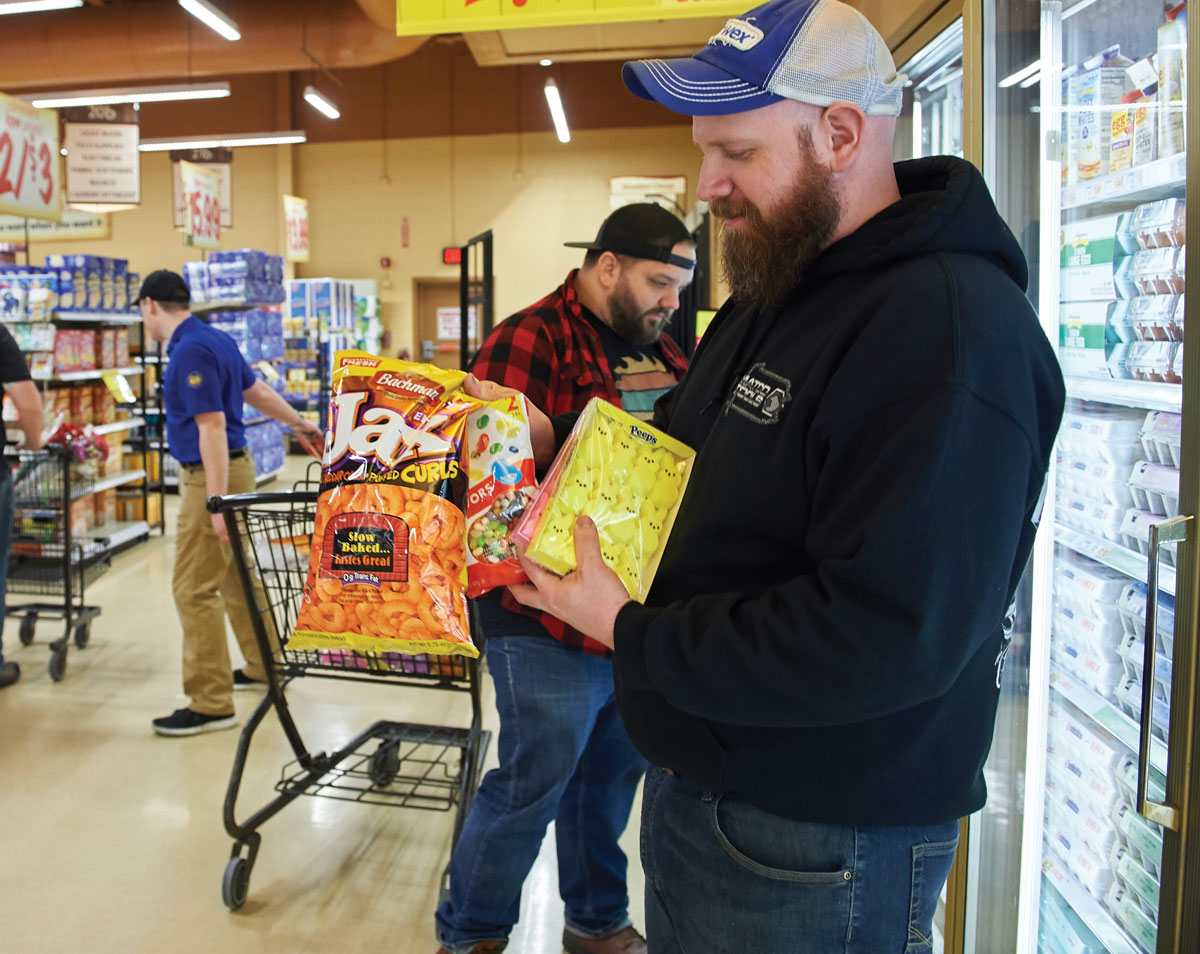 One of my favorite after-dinner pastimes is going for a walk along Pine Creek with a cigar or my pipe. It’s contemplative and introspective, revisiting the vector of life with a nip in the air. This time, the sound of countless coyotes barking and yipping, echoed throughout the mountains. One night on a previous trip, after standing silently in the snow for nearly an hour, a bobcat jumped out of a nearby tree. On another occasion (this one in the summer), while photographing night exposures of the sky, I was quickly shooed inside the cabin as a curious black bear loomed around the corner. You never know what might find you!

When Sunday dawns, the mood turns a bit somber at the thought of going home. Nevertheless, we still manage to make the most of the waning weekend. After cleaning up, we load the vehicle, pack away the cooking gear and winterize The Alpine. Until next year, old friend.

Food: An Integral Part of Our Weekend 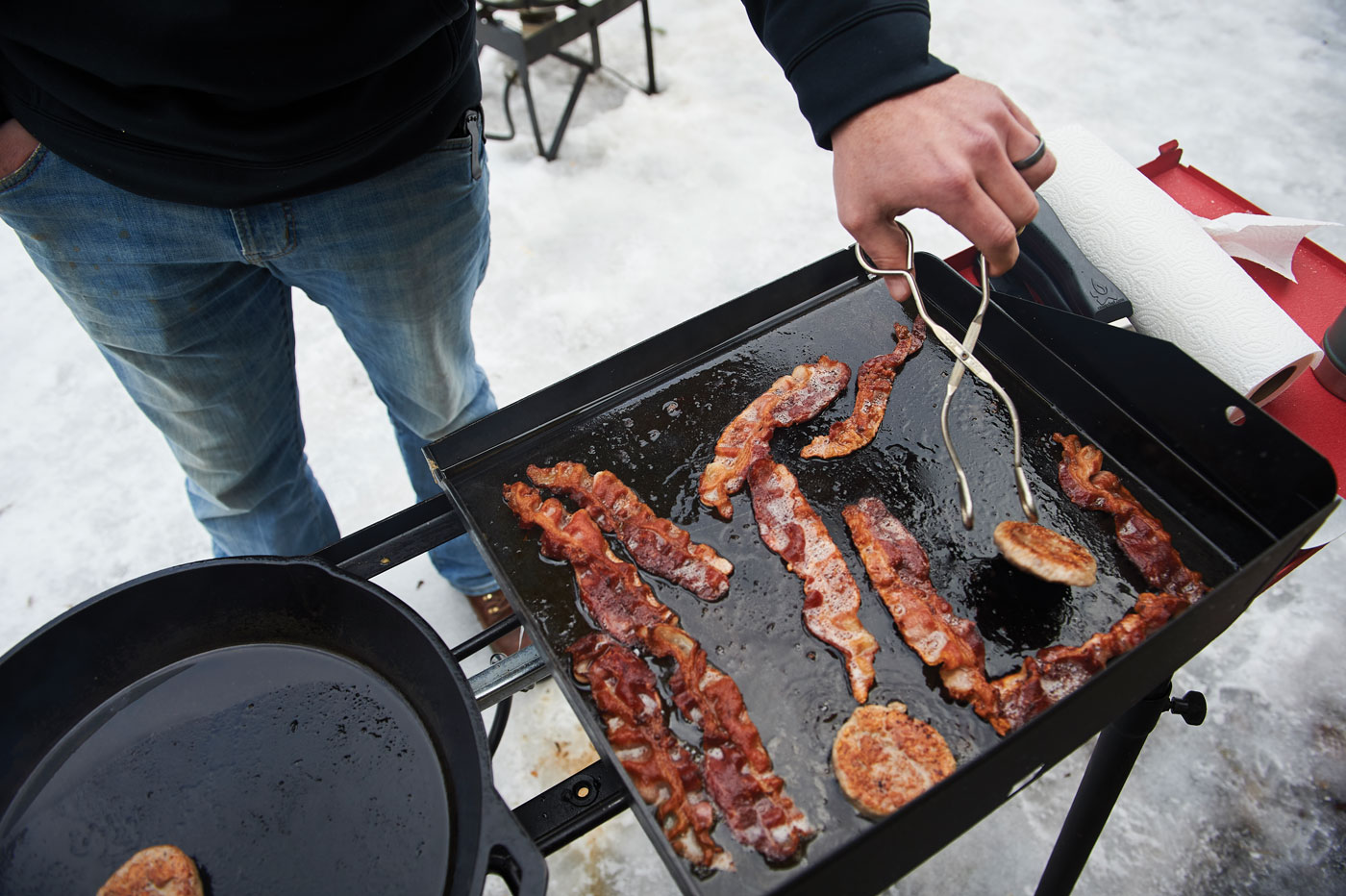 This is not a throw some hot dogs over the campfire and call it dinner kind of weekend. To be fair, I’m not much of an outlier in the group – we all have big appetites to address. It’s fantastic to be among so many guys who are passionate about food and cooking. On last year’s drive up U.S. Route 15 towards our solitary destination – it was still early in the day and we were already along the West Branch of the Susquehanna River – we researched and debated breakfast locations both local and afar.

Josh “Foos” Stoltzfus consulted Yelp and the various notes he had prepared in anticipation. We ended up at The Buttery Biscuit in South Williamsport, which was a definite win. I was in the mood for bacon and eggs but immediately regretted my decision as breakfast was served. Everything looked amazing! Fear of missing out took hold for everyone. We ended up turning the table into a version of Shady Maple Smorgasbord, sharing our portions in order to sample different plates. The chicken-fried steak was a winner and the eggs Benedict was right there with it. It occurred to me that The Buttery Biscuit was quite an upgrade from grabbing Taco Bell during our Friday night departures in younger years. 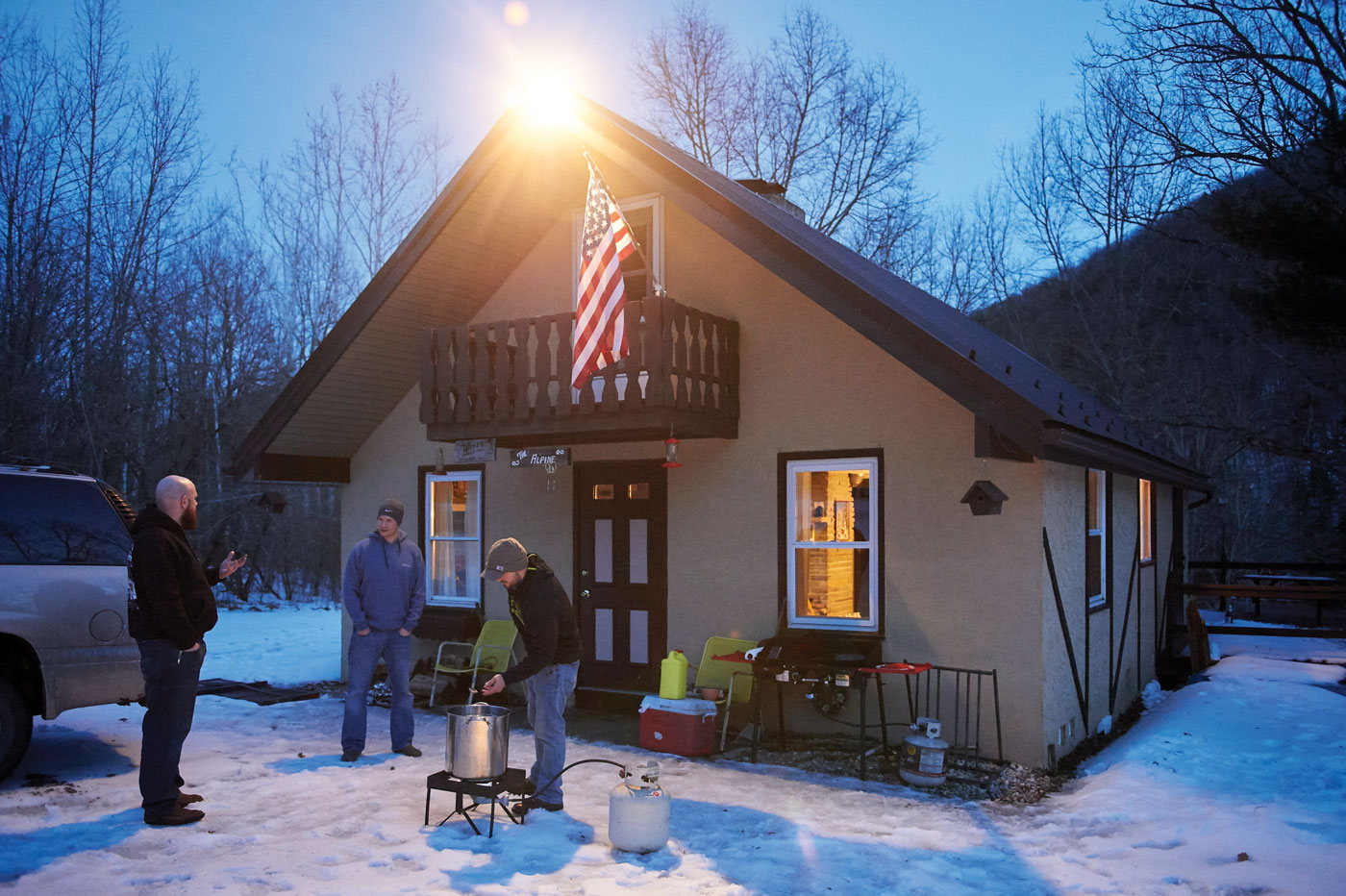 From left to right, Eric Musser, Derrick Martin and Jamie Weaver outside of the Martin family cabin, affectionately known as The Alpine.

Continuing with our trip, we stopped a few minutes later at our next and final stop: Wegmans in Williamsport. Stopping at Wegmans has become a tradition. It’s also the store that first introduced me to the Wegmans “experience.” From a sentimental standpoint, it’s the location to which I compare all others, including larger and more robust stores such as the one in Lancaster.

We shop on full stomachs, not because it’s wise, but because we’re hungry and impatient men eager to be at the cabin and certain to make child-like dietary choices. 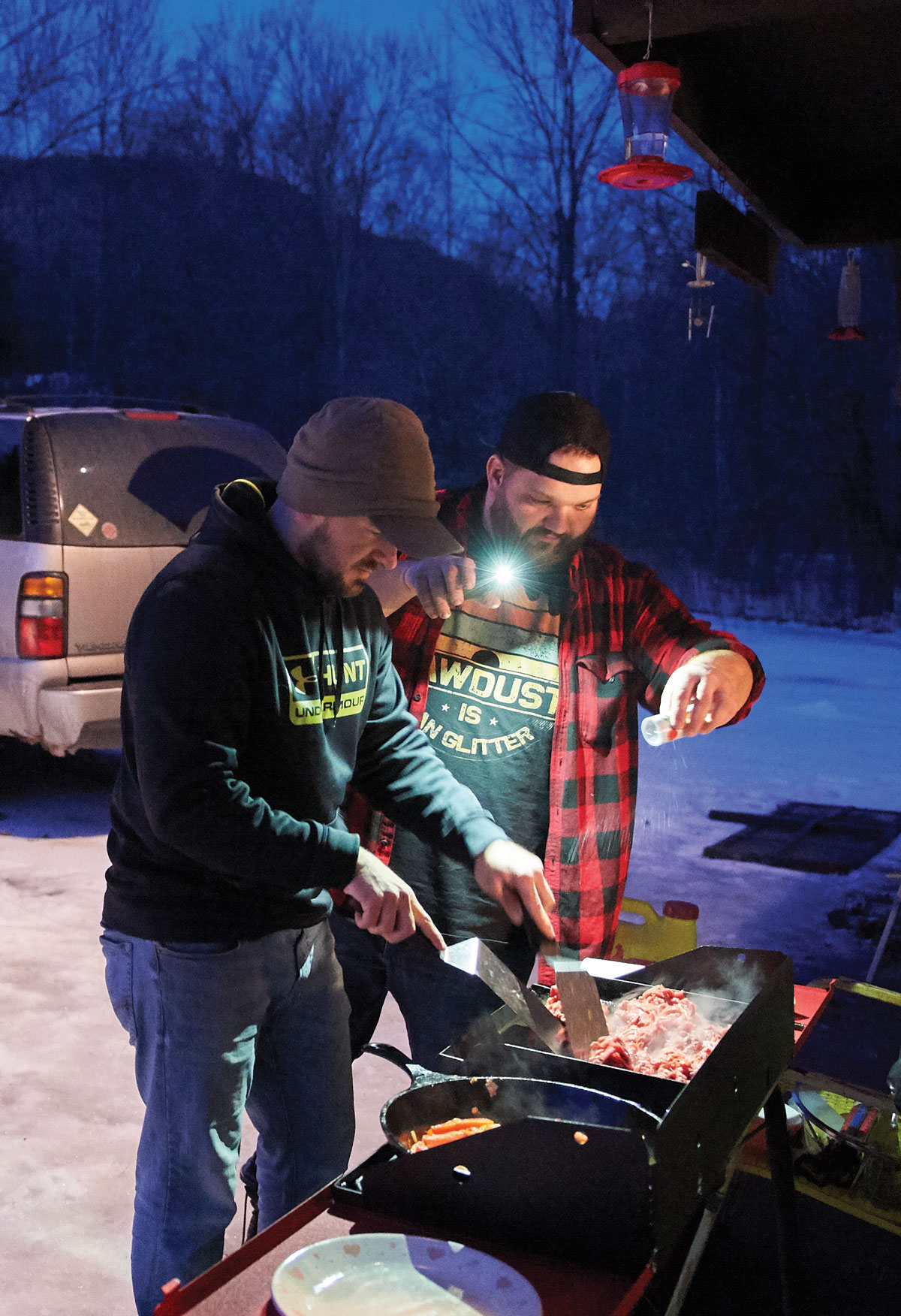 Just inside the Wegmans entrance, a random shopper stopped us and remarked, “You guys look like trouble.” Agreeably, we laughed and I quickly shot back that her optometrist is doing a fine job. 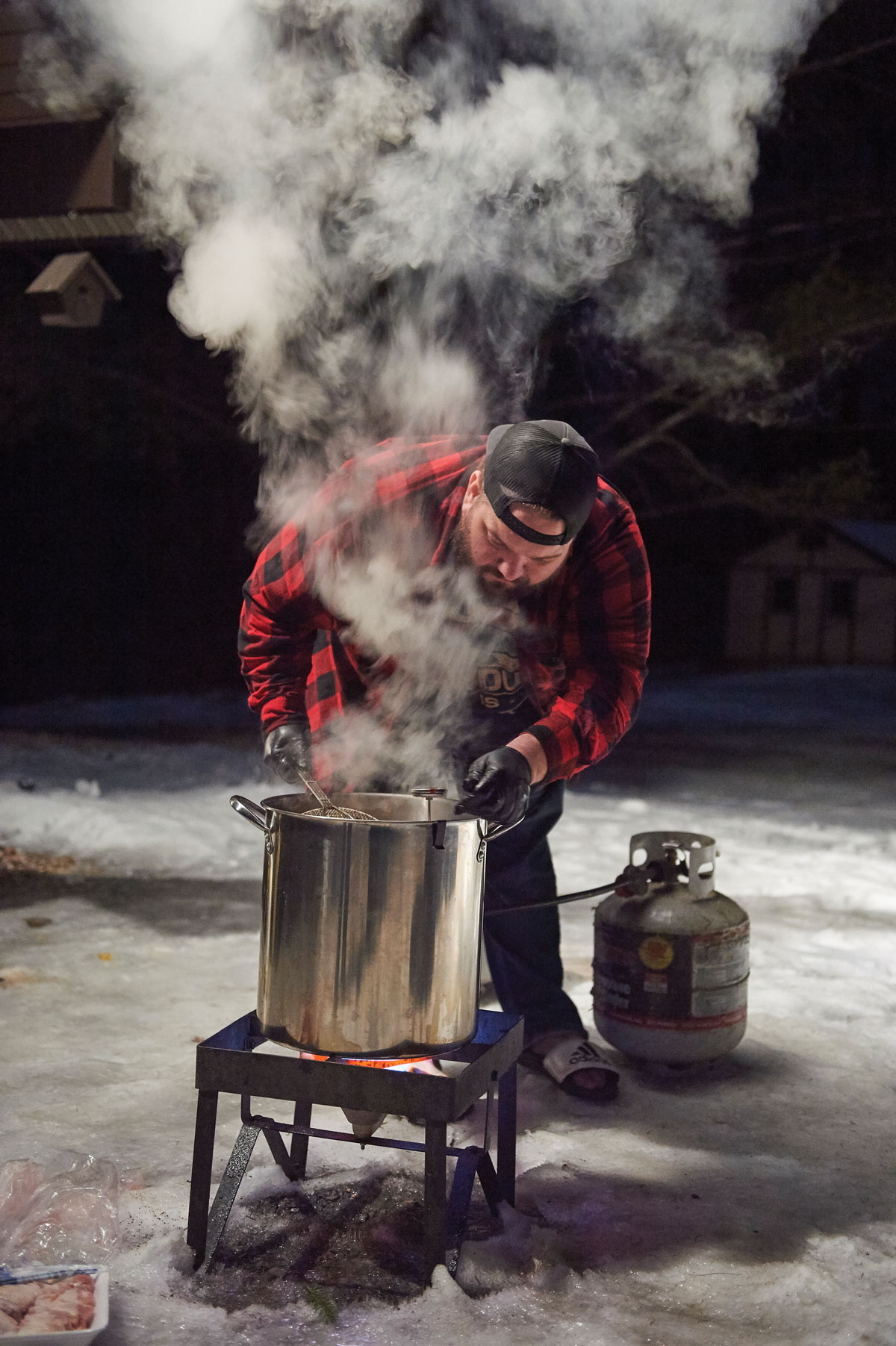 Josh Stoltzfus checks the temperature of the fryer we used throughout the weekend to cook fries, wings and onion rings.

As we’ve grown up, we actually meal-plan these days, so Jamie Weaver prepared a bit of a shopping list. When all of our preferences don’t align or we just want more of something special, side purchases from the collective pot are made. For example, Eric grabbed Mountain Dew and jelly beans. I almost always opt for chocolate-chip cookies and Swedish fish.

At checkout, wagers are placed in the fashion of The Price is Right as to what the total grocery bill will be. There is no prize beyond being right, or the least wrong, and that’s plenty. 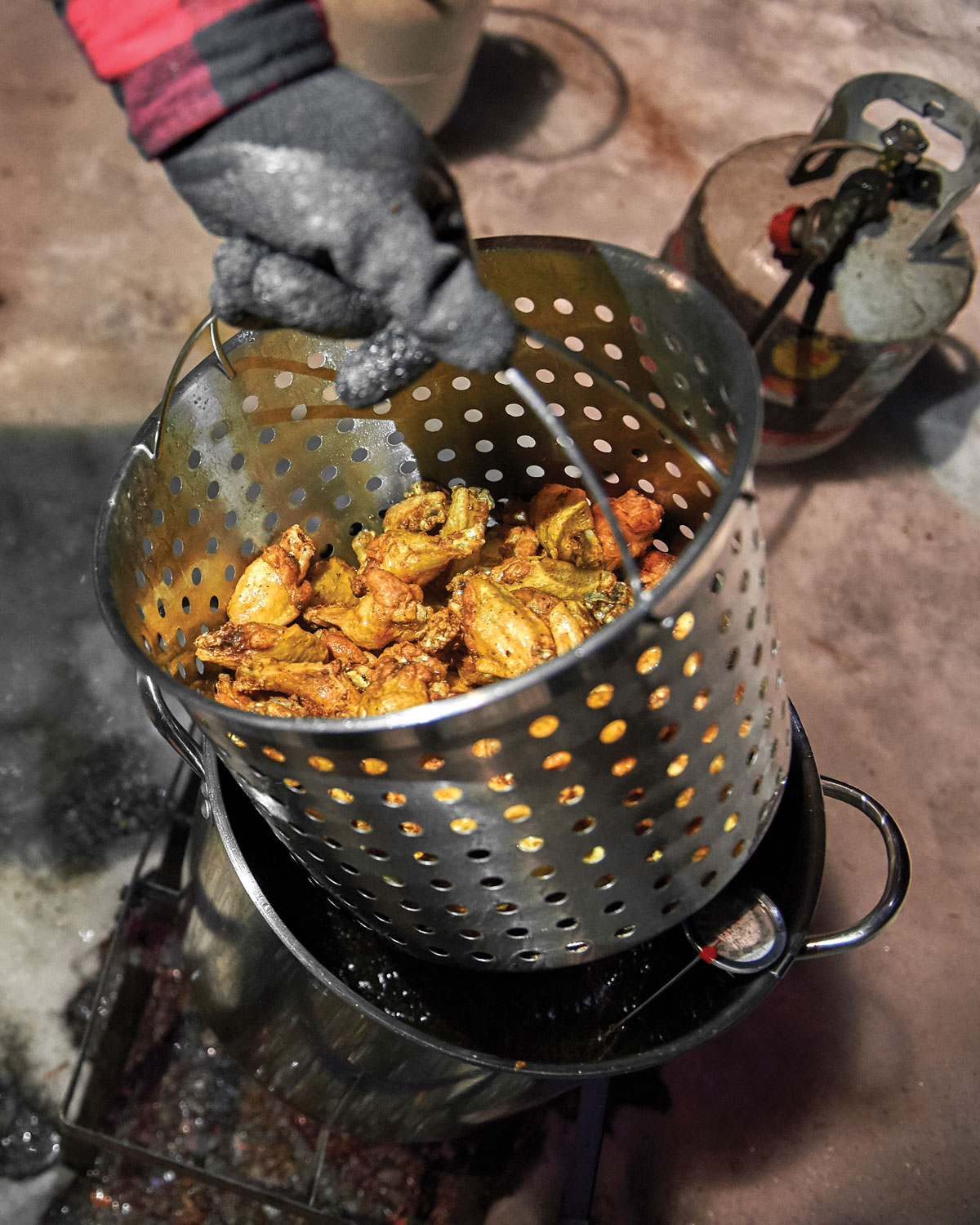 Later, funds are shuffled without adequate change or payment methods. Complex deals are struck to cover lodging, fuel and grocery expenses, making international trade agreements appear simple. Services like Venmo and PayPal didn’t exist at the time of our inaugural trip, so the challenge of settling all debts in cash and without adequate change has become a game.

For this trip, 100% of our cooking took place over a propane stove outdoors. Jamie brought his glorious, two-burner Camp Chef propane stove and it served us well all weekend. I think it was below freezing the entire time but we didn’t mind. Cleanup was easy and the meals fairly straightforward – they were made from scratch and more imaginative than hot dogs cooked over the fire. Cheesesteaks made out of sliced sirloins, seasoned French fries and onion rings kicked off our first night’s meal. 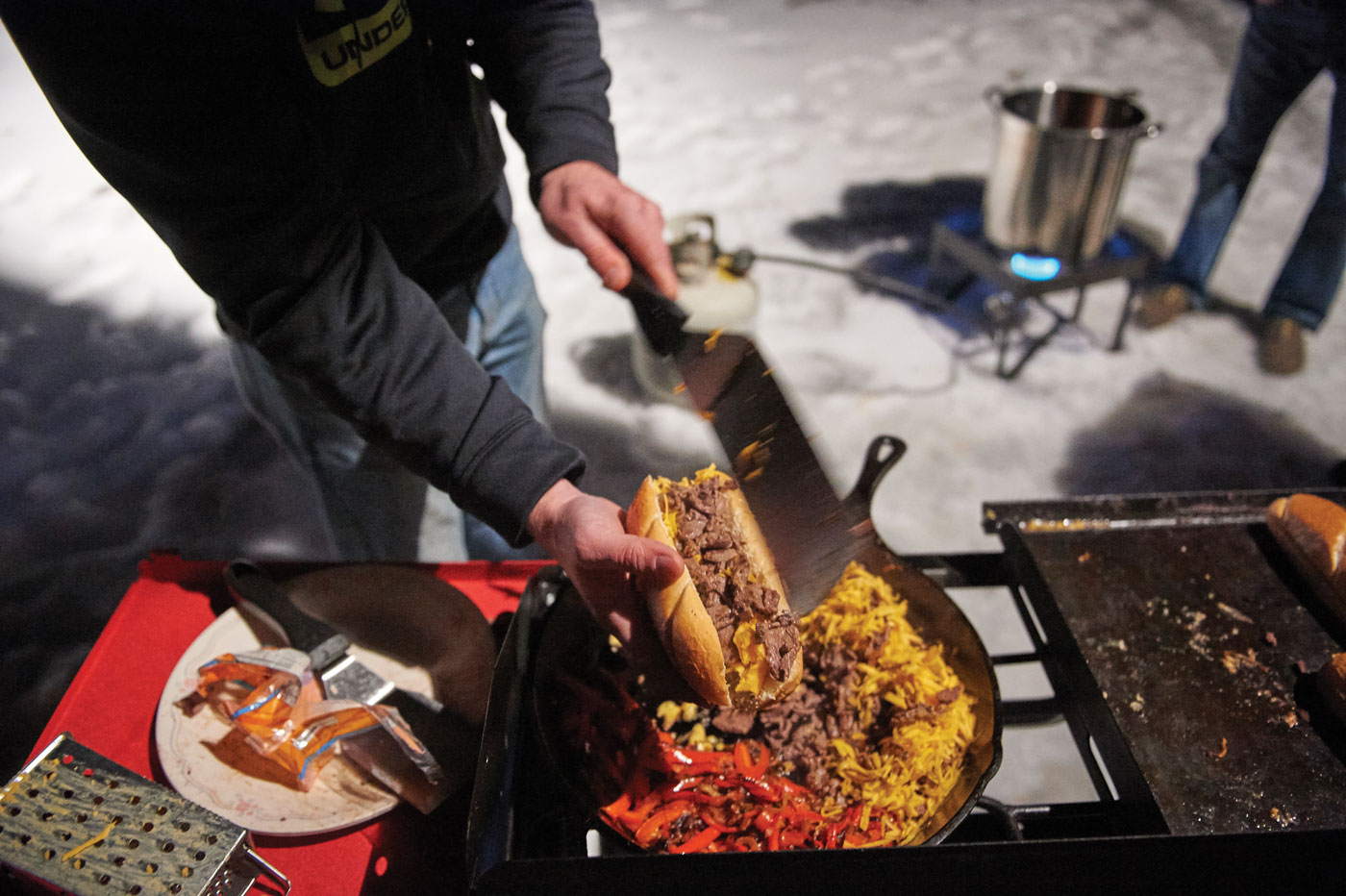 Breakfast the next morning was again outdoors: sausage, bacon, scrambled eggs with cheese (take them off early and keep them constantly moving on a hot skillet), fried tater tots, coffee and orange juice. As much as we all love the smell of bacon, outdoor cooking makes for a cabin that doesn’t smell like a fryer. 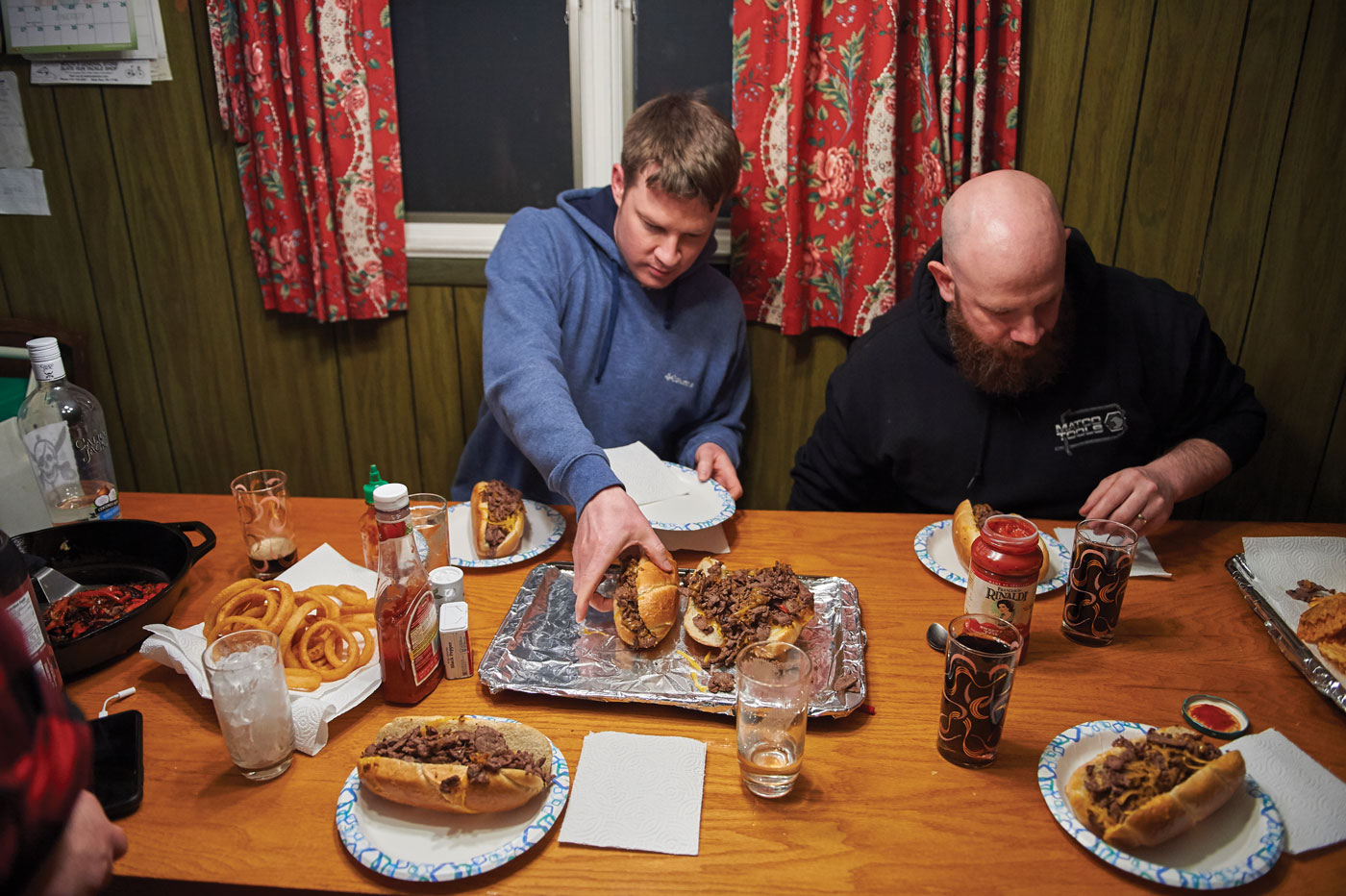 After a big breakfast, we made sure we were good and hungry for dinner that night: chicken wings dropped into hot peanut oil. Foos, standing on a sheet of ice in his sandals and wearing his “Sawdust is Man Glitter” T-shirt, fired up his high-pressure propane burner. Served with a side of fireworks, crispy-plain and Old Bay-seasoned wings came out of the fryer to be paired with an assortment of dipping sauces made from scratch. 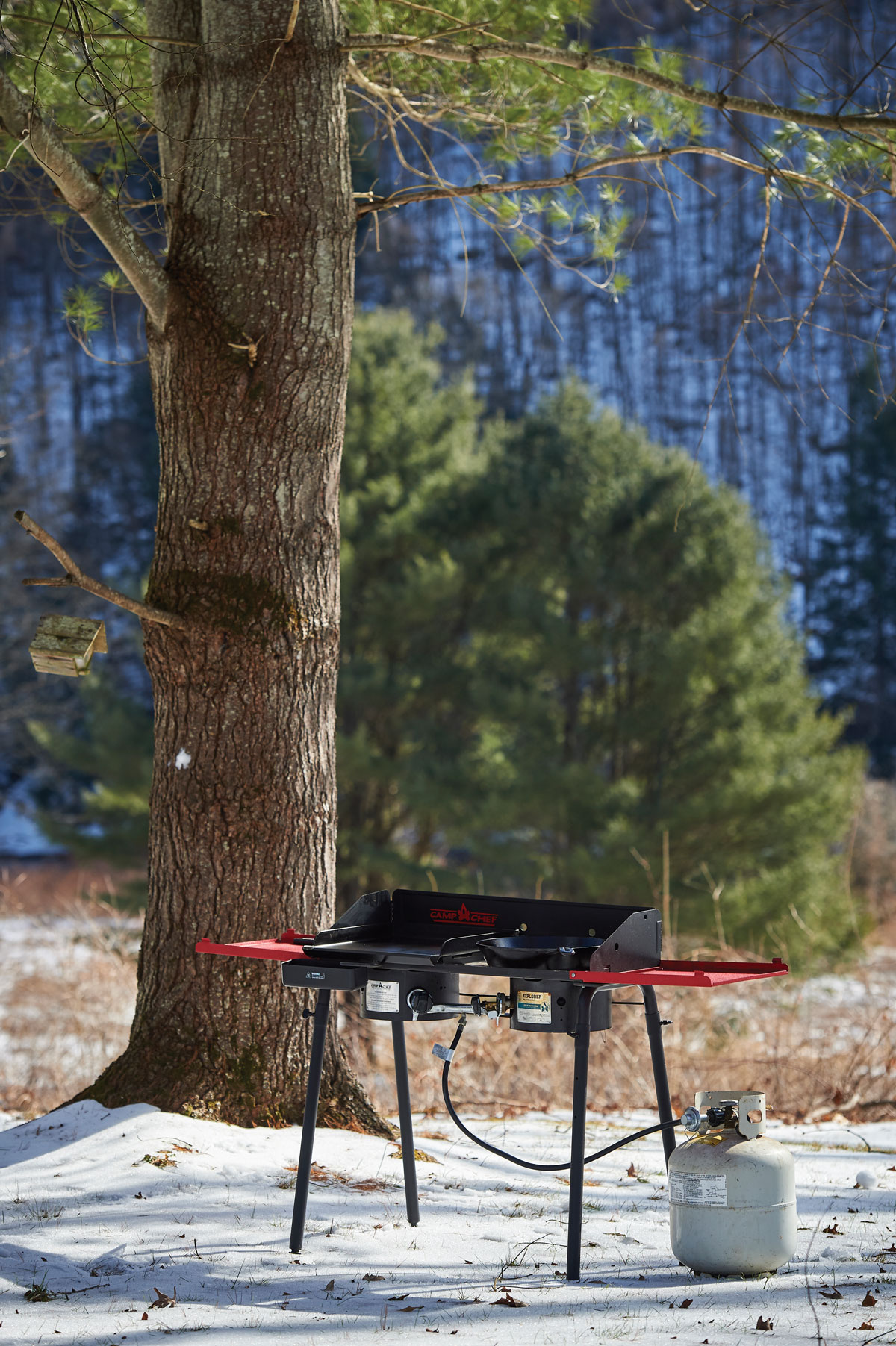 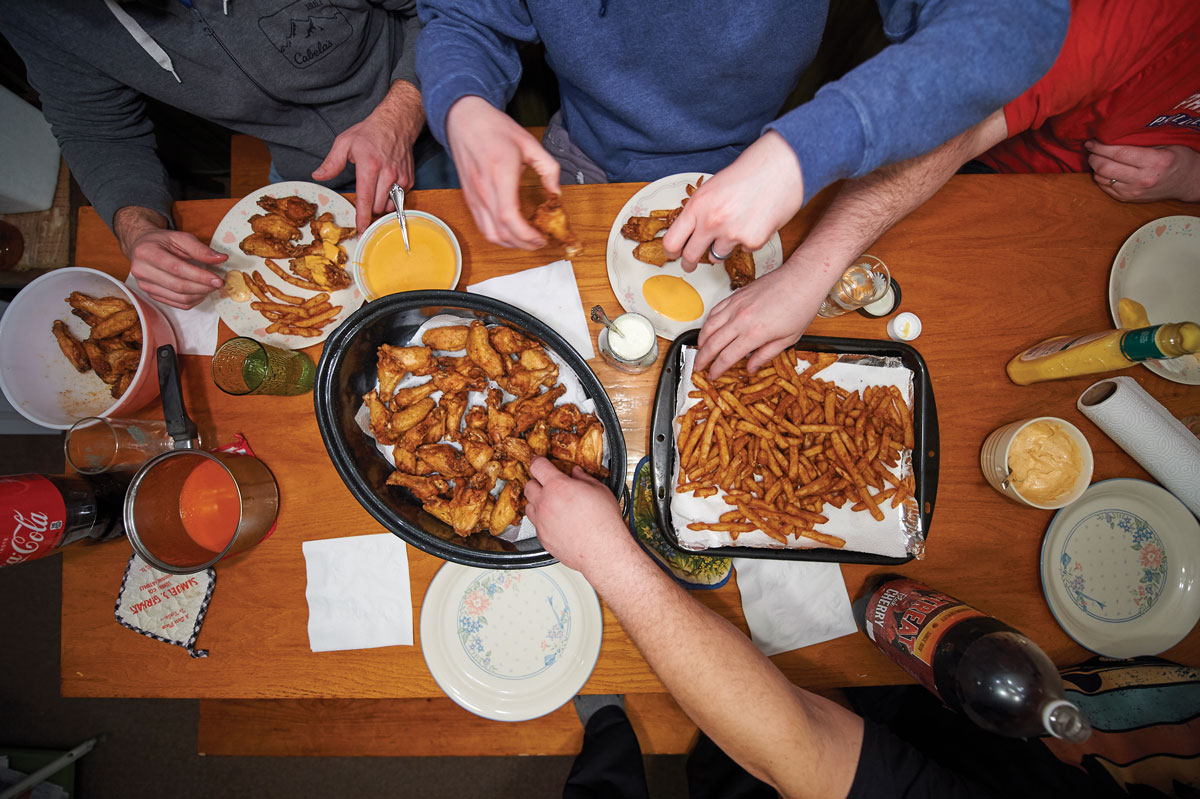 Wings and French fries for Saturday’s dinner made complete with homemade dipping sauces.

It’s been quite a while since we attended Garden Spot High School together. We all now find ourselves in different stages of life. Some of us have families. Where we each call home has changed, numerous times. Jobs and career paths have shifted and may not even be settled. Everyone is busier than ever with new responsibilities and commitments. 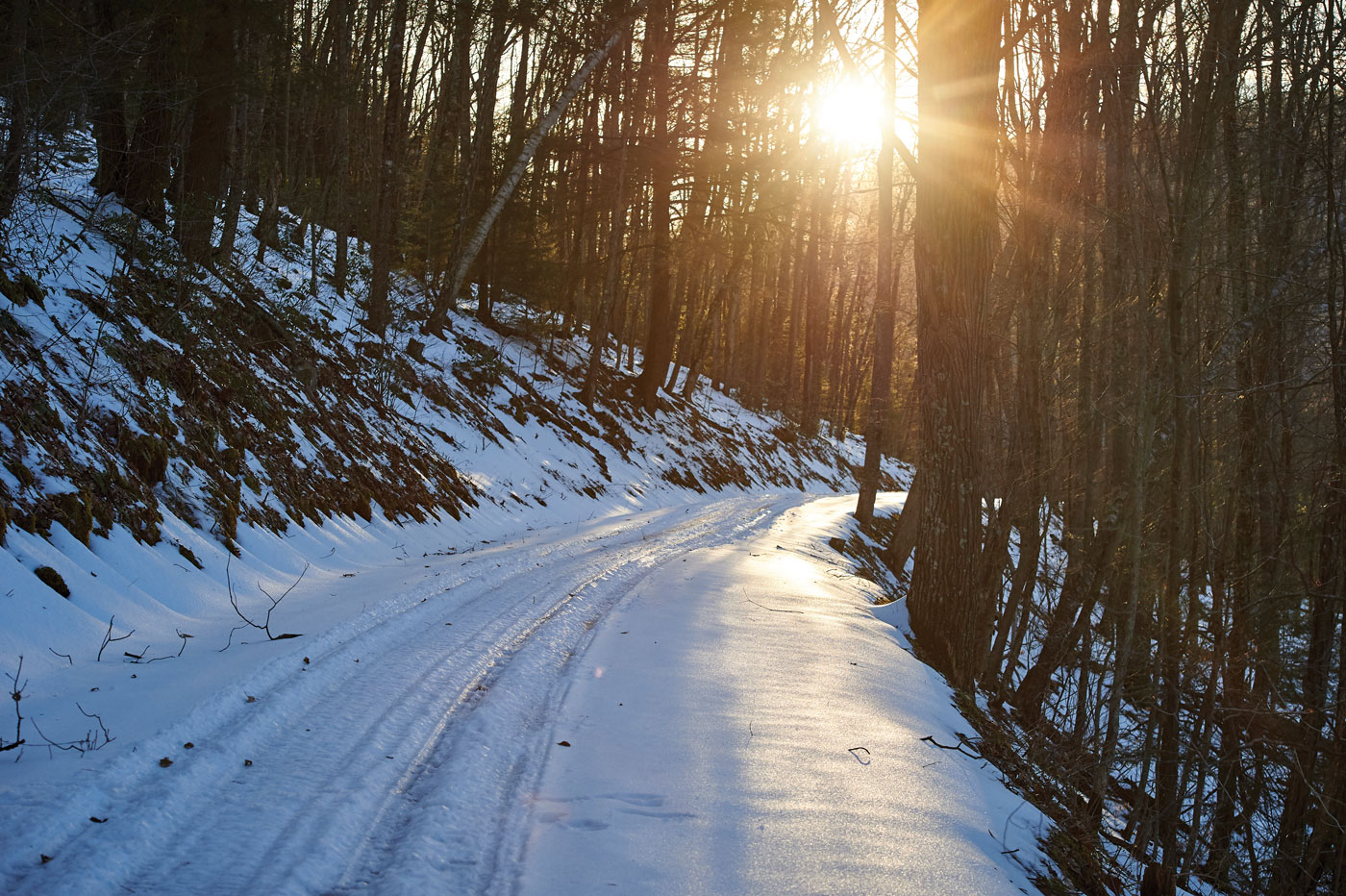 Even in our early 30s, we’ve endured the hardships of loved ones lost in all capacities of life. Yet, the refuge of the mountains, of The Alpine, which is quiet until we arrive, is thankfully a constant. Even better, so are our friendships. I asked Eric to read this for accuracy and he replied, “Seriously can’t wait for MMW! It’s funny, Lauren [his wife] and I were just talking about how much richer childhood friendships tend to be, because even if you only get to hang out a couple times a year, within hours – sometimes minutes – it’s like you are right back where you left off. You don’t have to explain yourself because you’re already known.” 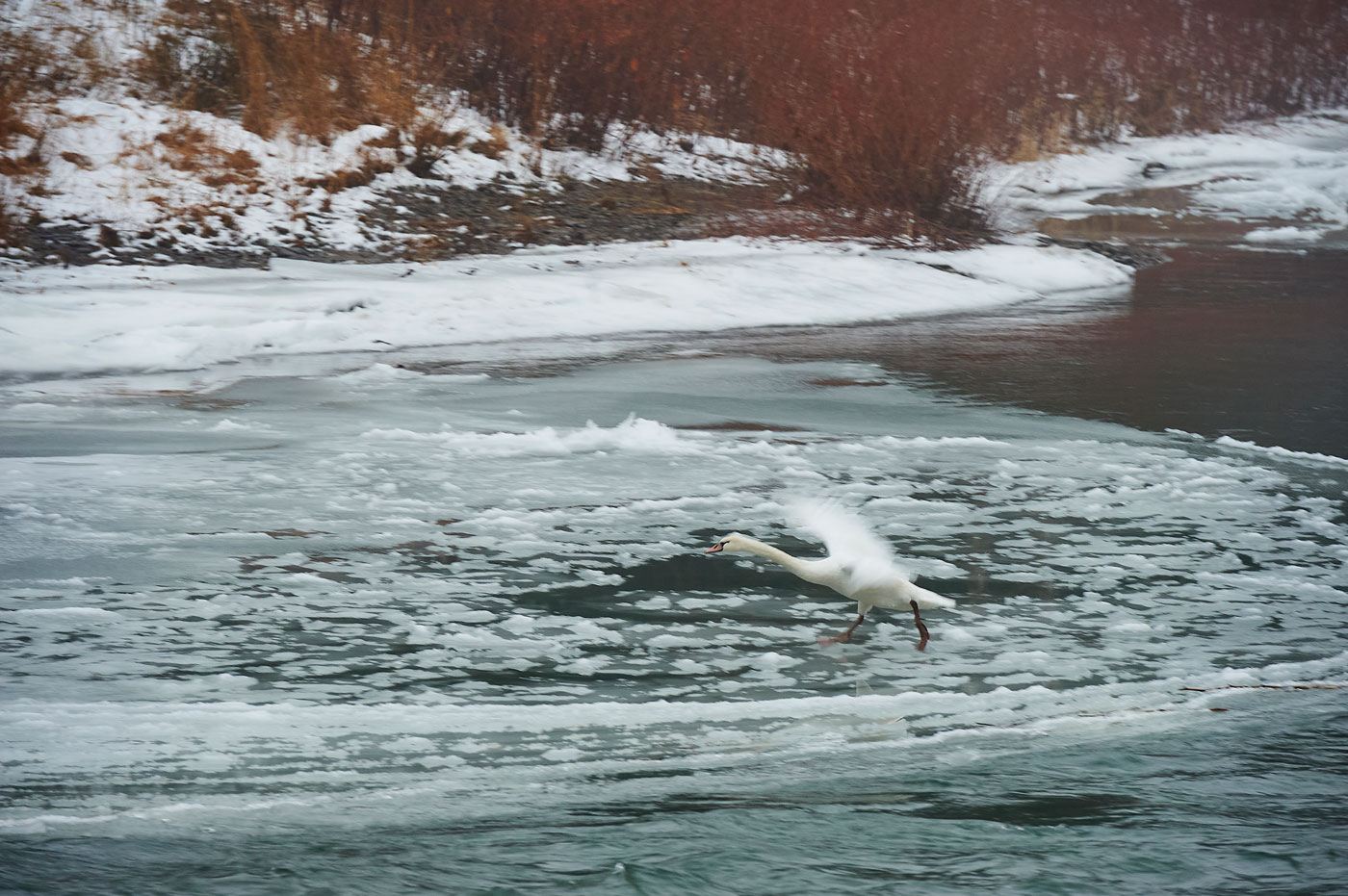 A Mute Swan takes flight on an icy Pine Creek.

As we’ve gotten a little older – I dare not say matured – we’ve come to appreciate better food and to deeply respect the shared occasion. It’s an annual highlight; the anticipation of it is almost as great as the event itself. Yeah, we’re still “trouble” – and without question, we each regress during our annual weekend at the cabin. It’s a part of life I hope we always hold onto.

Josh Stoltzfus prepares chicken wings with a side of fireworks at the Martin family cabin in Blackwell, Tioga County.