Many of today’s holiday traditions are rooted in the Victorian era. Greeting cards, handmade ornaments, feather trees and more can trace their beginnings to the 19th century. 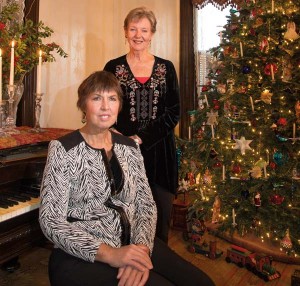 Jeanne Fisher never does anything half way. When she was asked to participate in last year’s Columbia Victorian Christmas Tour, she decided to transform her home, which dates to 1846, into a holiday masterpiece.

Jeanne, however, had a slight problem. Since purchasing and restoring her Columbia home nearly 10 years ago, she had never celebrated the holidays there. Her home in the Philadelphia suburbs is a more convenient gathering place for her far-flung children. “The decorations I use for that house are far from Victorian,” Jeanne notes. So, she turned to the Internet in order to find authentic ornaments. However, she instantly encountered a roadblock: authentic Victorian ornaments and decor are outlandishly expensive. It would cost a fortune to decorate even a small tree.

Jeanne then strolled down the street to Garth Gallery. She was sure the gallery’s owner, Cle Berntheizel, would have some ideas. Indeed, it was Cle to the rescue. One of his friends, Dawn Fisher (no relation to Jeanne), is an authority on period decorating for the holidays. “For as long as I’ve known Dawn, she’s been crazy about Christmas,” Cle says of their friendship that dates back to attending the York Academy of Art together. As an added bonus, Dawn is very familiar with the Victorian architecture for which Columbia is known. For a time, she managed Angela House, an antiques consignment shop that was located in a building that was formerly home to the town’s Women’s Club. At holiday time, she pulled out all the stops to entice shoppers to visit the store. “Every window had a tree in it that was decorated with angels,” she explains.

The windows created a buzz, and soon people were asking Dawn to help them with their holiday-decorating projects. That led her to the National Christmas Center in Paradise, where she began assisting curator Jim Morrison with displays. Soon she was helping him decorate hotel lobbies and other venues that serve as a way to promote the center. 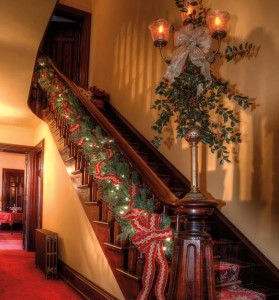 Guests for last year’s house tour were greeted by this festively decorated staircase.

Jeanne was impressed with Dawn’s ideas – “she’s very meticulous,” she notes – and the two agreed to collaborate on decorating the house as it would have been during the Victorian era, which is regarded as the period 1837-1901. The game plan included a fully decorated, floor-to-ceiling tree, table-top feather trees, a display of Jeanne’s vintage greeting cards and greenery throughout the house. Cle volunteered to take care of securing a tree and placed an order with Snyder’s Market for a 12-1/2-foot Fraser fir.

Dawn estimated the project would require three days to complete. The first day would be dedicated to placing the lights on the tree. “I always start from the bottom and wrap each branch with lights,” she explains. However, the size of this tree prompted her to deviate from routine and instead wrap the trunk with lights (for more dimension) and then move to the branches.

Dawn also arrived with what Jeanne estimated to be “a million boxes of ornaments.” Inside the boxes was a treasure trove of Victorian-style ornaments that ranged from reproductions of the distinctive styles of Germany to replicas of the “handmade” designs that would have been crafted from scraps of fabric or spun cotton/wool. “I used everything I have, plus I borrowed things from the National Christmas Center,” Dawn notes. The reproduction ornaments came from companies such as Old World Christmas and Christopher Radko. The ornaments took the shapes of angels, birds, balloons, trains and Santa. The Victorian custom of placing treats, such as candy, nuts and fruit in baskets (often created from blown eggs) and small gift bags, and hanging them on the tree was also represented. Antique prisms and Moravian-like stars also brought some sparkle to the tree. Wax candles and icicles also decorated the tree.

“The tree was a spectacular specimen,” says Dawn. “It was my honor and pleasure to decorate it. I like to think the 1,000 ornaments I added only served to gild the lily. My only goal was to do it justice.”

While Dawn worked on the tree, Jeanne and her friend, Doryth Deisley, decorated the staircase that ascends from the foyer to the upper floors. Jeanne and Cle also decorated the porch and hung wreaths on the front doors. Two kissing balls, made by a florist in Philadelphia, added to the Victorian ambiance.

But, Jeanne wasn’t quite finished. She borrowed costumes from Columbia’s renowned designer Janet Wood – or as Jeanne calls her, “the Cecil B. DeMille of Columbia” – and recruited some friends to join her in welcoming tour goers to her home. “We had a lot of fun,” she reports. “The day was definitely special.” And, not to let all their hard work go to waste, Jeanne hosted several parties at the house over the holidays.

Information on Victorian Christmas traditions was found on the websites of the BBC and Golden Glow of Christmas Past.

Christmas letters were popular during the Victorian era. Bored with their nondescript look, Sir Henry Cole instructed painter/illustrator John Callcott Horsley to create something that better embodied the season. Horsley supplied Cole with an illustration of a festive family gathering. Vines and twigs framed the illustration. A message – Merry Christmas and Happy New Year – provided the finishing touch and became a popular verbal greeting at holiday time in England. Cole, who owned a lithography company, was so impressed with the results that he reproduced the image on 3×5 cards. Queen Victoria became a huge fan of the Christmas card and sent out thousands each year. By the 1860s, Christmas cards were a big business in England. The first American Christmas cards were printed in Boston in 1874.
For this mantle-top display, Dawn utilized Jeanne’s collection of cards that date to the early 1900s. 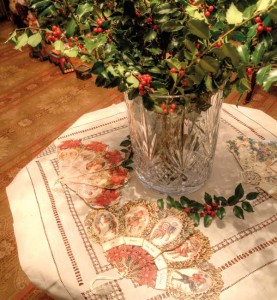 The Victorians decorated their homes with holly and other greenery at holiday time. They believed that holly brings good fortune. A holly tree in the garden was thought to protect a house from fire. Mistletoe was originally viewed by the Greeks and Romans as a holy plant in that it had the power to drive away evil and bring enemies together by embracing beneath it. The Victorians introduced the kissing concept to the superstition. In some cultures, kissing under the mistletoe ensures good luck. In others, it is believed that if a woman refuses the kiss, bad luck will follow. Note the reproduction fans. 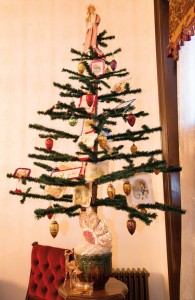 Feather trees originated in Germany in the mid-1800s. The Germans preferred table-top trees, hence many of the country’s trees were being lopped off at their tops, letting the remainder of the tree go to waste. As a result, deforestation projects decimated the German countryside. Laws eventually protected the trees from the practice. In the meantime, the Germans had to improvise. Enter the world’s first artificial Christmas tree. Made to resemble a white pine, the trees were constructed of wire to which feathers (goose, turkey, ostrich or swan) were painstakingly attached. The feathers were dyed green to resemble pine needles.
Dawn decorated this feather tree with ornaments shaped like grape clusters, greeting and trade cards that were transformed into decorations with the addition of fringe and the requisite angel tree topper, which was typically made from  tinsel and porcelain or wax. The angel toppers represented childlike innocence and purity. 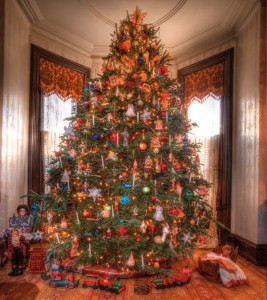 Prior to the reign of Queen Victoria, Christmas was a low-key celebration. In fact, it was business as usual on Christmas Day in England, as shops and offices were open and employees were expected to report for work. The queen’s husband, Prince Albert, played a major role in making Christmas a festive holiday in England. The German-born prince introduced England to the custom of decorating a tree. The first tree at Windsor Castle was erected in 1841 and was filled with German-made ornaments. In 1848, a drawing of the royal family gathered around a Christmas tree was published in the Illustrated London News, prompting Christmas trees to become an English tradition.
Gift giving also became customary. Children received such items as dolls and trains. Fruit was a cherished gift, as well, due to the fact that it was out-of-season and was quite expensive. “If you received an orange for Christmas, it was a big deal,” Dawn explains. 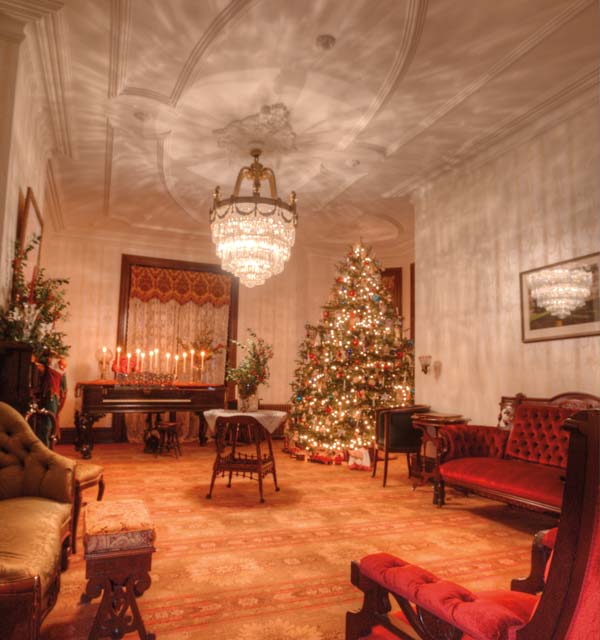 The decorative plaster ceilings that define the parlor were restored and recreated during the extensive restoration project. The chandelier is from the original Brunswick Hotel. The carpet was created by Family Heirloom Weavers in Red Lion. The company’s work was seen in the movie, Lincoln.