When David Boland and Jim Brown finally saw a house that had been on the market for years, they knew they had their work cut out. The Frank Lloyd Wright-inspired house was in need of all the TLC they could provide.

The history of this house is fascinating. It was designed by Jean Deavercard, a French Canadian who was inspired by the “one with nature” principles espoused by America’s greatest architect: Frank Lloyd Wright. In this area of the state, Deavercard’s work was especially evident along the Main Line, where his designs featured the flat roofs that Wright made famous during his Usonian phase. Instead of the Victorian ideal of purposeful, confined spaces, Wright’s visionary homes were designed to be open, fluid and livable.

Typically L-shaped, Wright’s one-story, ultra-modern homes included such innovative features as carports, clerestory windows and radiant heating. And, like any Wright-designed building, harmony with nature was critical. “In Wright’s estimation, a house shouldn’t stand out, but rather blend in with the environment,” David explains.

The home Deavercard designed for a Lancaster couple included all of those Wright-inspired features. Built in 1956 – Manny Murray was the contractor – it’s located on what had once been Meadia Heights Golf Club’s ladies’ nine-hole course. After World War II, when women were given access to regulation 18-hole courses, Meadia Heights closed the course and sold the land to a developer.

The Deavercard-designed house also functioned as an Armstrong Idea House (officially it was known as the Maintenance-free Malibu Ranch House). In addition to the Lancaster-based company’s latest products, the house featured innovations such as drywall and Formica. “Drywall had just come onto the market,” David points out. The entire kitchen – cabinetry included – was made of Formica. “It sort of gave it a doctor’s office look,” Jim says of the walnut, wood-grain pattern that was used. And, of course, the colors of the late 1950s resonated throughout the house.

According to David and Jim, Deavercard made all the selections, including the furnishings. “Like Wright, if you hired him, you had no say,” says David. “He took charge of the furnishings and finishes. He even had a mural done over the fireplace.” The house was comprised of living spaces, four bedrooms and 1-1/2 baths. It was sited on the 1/3-acre lot to take full advantage of the golf course views.

The original homeowners lived in the house for the rest of their lives. Unfortunately, they assumed “maintenance-free” meant just that. By the early ‘90s, the house and the grounds had fallen into a state of serious disrepair. Following the death of the wife, the estate’s heirs and a succession of real estate agents had no luck in selling it. Finally, it was handed over to a bank for auction purposes. That ploy failed as well. “Ranch-style houses were out of vogue then,” David points out. Now, of course, Mid-century Moderns are in demand.

Enter David and Jim. It appears as if their life experiences were purposeful, and they were meant to breathe new life into the house. David, who grew up in the Altoona area, always had an interest in architecture and design. “My grandfather was a contractor, so I guess it’s in my blood,” he explains. After graduating from Penn State (hospitality/hotel management), he accepted a managerial position at the Lancaster Country Club. He also obtained his real-estate license. And, he became a partner in The Groves, a senior-living residence that makes its home in a beautiful Victorian that sits along Main Street in Ephrata. David is now the sole owner of The Groves, which has undergone its share of renovations under his guidance. “One of the first things I did was paint the dining-room ceiling pink,” he recalls. “That got a lot of comments, most of them positive.”

As for Jim, he grew up in Leola. An interest in landscape design took him to Penn Technical College. A job with the High companies – overseeing Greenfield Corporate Center’s park-like environs – inspired an interest in property management. From there, he transitioned to the banking industry and in doing so, obtained a real-estate license. Presently, he is director of facilities for Ephrata National Bank, which entails everything from supervising the construction of branch offices to handling foreclosed properties. Between them, David and Jim have flipped, consulted on and renovated more than 40 houses over the years.]

David kept noticing the Mid-century Modern house when he perused the multiple listings. Clients of David’s expressed an interest in the house. David obtained the pass-key and made an appointment to show it. Before he could do so, they stopped by, looked through the windows and decided the work that would be needed was beyond their capability. Curious, David and Jim decided that since they had the pass-key, they would check it out.

“Horrified” might best describe their initial reactions. The shag carpets were saturated with water: 240,000 gallons of water had flowed through the house as a result of pipes bursting during the winter of 1993. It was now August 1994, and the inside of the house was so humid that the varnish on the wood paneling had melted. The original single-pane aluminum windows did little to keep the cold and heat at bay. Outdoors, plants were growing atop the patchwork roof. Trees and shrubs were so overgrown that the house was almost hidden from view. “Most people were convinced that the only option would be to tear down the house,” David says.

Still, David and Jim were intrigued. “We initially looked at it as a flip,” says David. But, there was so much to like: the location was fantastic (10 minutes from downtown), the neighborhood was established, and the house had an interesting story. So, they successfully negotiated with the bank on a selling price and put their Ephrata home on the market. It quickly sold. “We had to be out by November,” David recalls. They decided to move into the house and start renovations. “We ended up living in the four bedrooms,” he adds. Township officials were relieved someone had bought the eyesore and assured them that they would be supportive of their plans. In their estimation, anything would be an improvement.

So, they began by replacing the roof and updating the HVAC system. Landscaping was also given priority. “Everything was so overgrown that it made the house dark,” David notes. Jim recalls cutting down 17 trees that first year.

In 2008, david and jim decided to build an addition that would contain a foyer, den, office, dining room, butler’s pantry, bath and laundry. A free-standing, two-story garage was also built at the rear of the property. And, they also decided to fully renovate the original areas of the house. “We acted as the general contractors,” David explains. Jim’s father feared that the ambitious project was beyond David and Jim’s capabilities. He speculated that this time the duo had bitten off more than they could chew. Fortunately, that was not the case. The house stands as a testament to the original designer’s vision and David and Jim’s sense of design, problem-solving abilities and hands-on involvement.

The five-year process provided them with a house that is open, livable and in tune with nature. “It’s the way we like it,” David says of their home. “We use the house; we live in the house. Our dogs have free reign of the house.” They also like the fact that the house is very conducive to entertaining, inside and out. “We’ve carried on the tradition of being the party house of the neighborhood,” David reports. And, in saluting the philosophies of Wright and Deavercard, “We wanted it to appear that the house is part of the landscape,” he continues, noting that their property appears larger than it is, since it blends with the adjacent golf course.

Décor-wise, David is of the opinion that the house is very Lancaster County. “Yes, we have family antiques and our collections, but we’ve also incorporated our other interests, including art and decorative items from Santa Fe and Key West,” he says, noting that “mixing it up makes a home more interesting.” 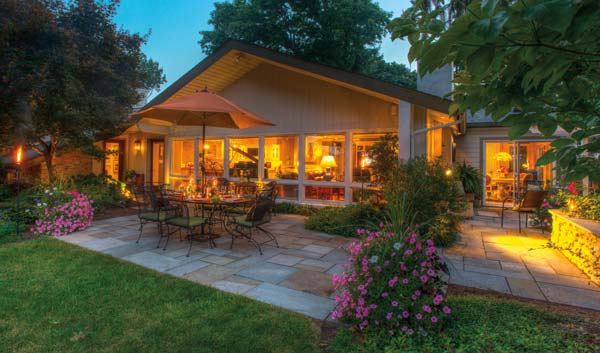 Frank Lloyd Wright’s notion that interior and exterior spaces should merge is exemplified in this Mid-century Modern update. The one-story house – circa 1956 – is surrounded by outdoor-living spaces. The oversized windows and glass doors provide a seamless transition between indoor and outdoor spaces. Two additions – to the left and right of the house – helped to expand it to 3,500 square feet.