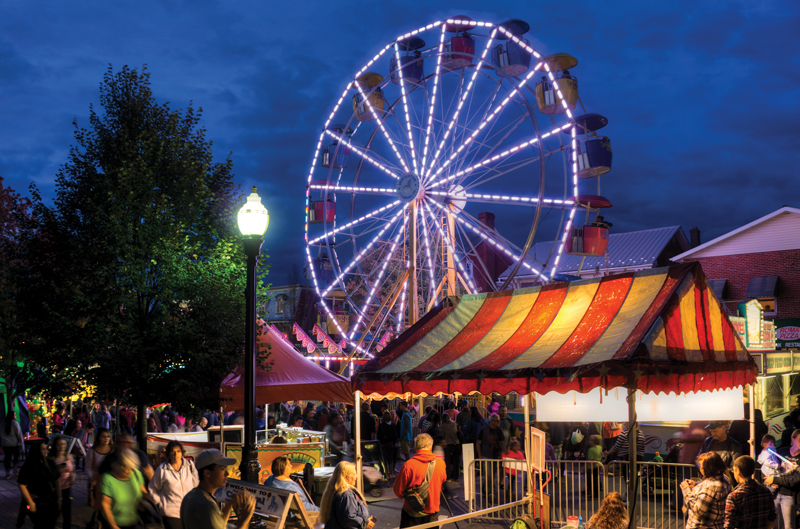 Fair season is finally here, and it’s one of my favorite times of the year! The sights, the sounds, the rides, the aromas and the flavors never fail to stir up memories. Just thinking about it gets me excited. This year one local fair will be celebrating a milestone. The Ephrata Fair, Pennsylvania’s largest street fair, is celebrating its 100th year!

It all began in 1919 when a few local businessmen came up with the idea of organizing and sponsoring a one-day event to honor veterans who had recently returned from World War I. The event was a success and even generated the funds to purchase the land that is now home to the town’s community park.

A year later, a farm harvest celebration was added, and by 1922, the now-annual event had become known as the Ephrata Farmers Day Fair. By the end of the 1920s, the fair was extended to a three-day event.

The fairs in the 1930s were similar to what we experience today, with plenty of games, competitions and a wide variety of foods. Unlike most of today’s modular stands, which travel from town to town, Ephrata’s stands were built to suit right on the spot. The 1930s also ushered in the start of the annual parade, which drew crowds from the surrounding areas, thanks in part to the participation of more and more floats over the years. Surviving both The Great Depression and World War II, the fair continued to grow in popularity year after year.

By the 1960s, the fair had become so large that some of the animal and agriculture exhibits had to be relocated from the midway. As a result, Tent City was created in Grater Memorial Park; it continues to host an array of agricultural and family-friendly activities.
In celebration of the 100th Annual Ephrata Fair, the Ephrata Farmers Day Association has created a variety of special activities throughout the week. The festivities will begin Sunday, September 23, with a “Welcome Home Ceremony” to honor local heroes past and present. It will be held at 2 p.m. at Winters Leadership Memorial in Veterans’ Plaza and will feature a number of special guests and speakers. Tuesday’s Opening Night Community Celebration at Tent City will kick off at 6:30 p.m. with food (including a pork chop dinner), games, music and Fun on the Farm activities. The 85th annual Ephrata Parade steps off at 7 p.m. on Wednesday.

Special guests will include the Philadelphia Eagles Pep Band. This year’s fair will also feature a Celebrate 100 Years Cake Contest, which requires participants to decorate their entries in honor of the milestone year.

Lots of memorabilia will be offered for sale, as well. Looking back, it’s difficult to even imagine all the cherished memories that were inspired by this annual community event. Having fond memories of the Ephrata Fair from my childhood, it’s been a joy to share the experience with my own children. I hope to see you there!

For a complete schedule and details for all of the fair’s events, visit ephratafair.org.