In the 1960s, when suburbia was expanding by leaps and bounds, members of Lions clubs saw an opportunity to serve their communities from a recreational standpoint through building and operating swimming pools. Many are now closed due to aging mechanical systems, crumbling foundations and decreasing memberships. However,  Millersville Lions Club Pool has managed to buck the trend and is not only surviving but is thriving. 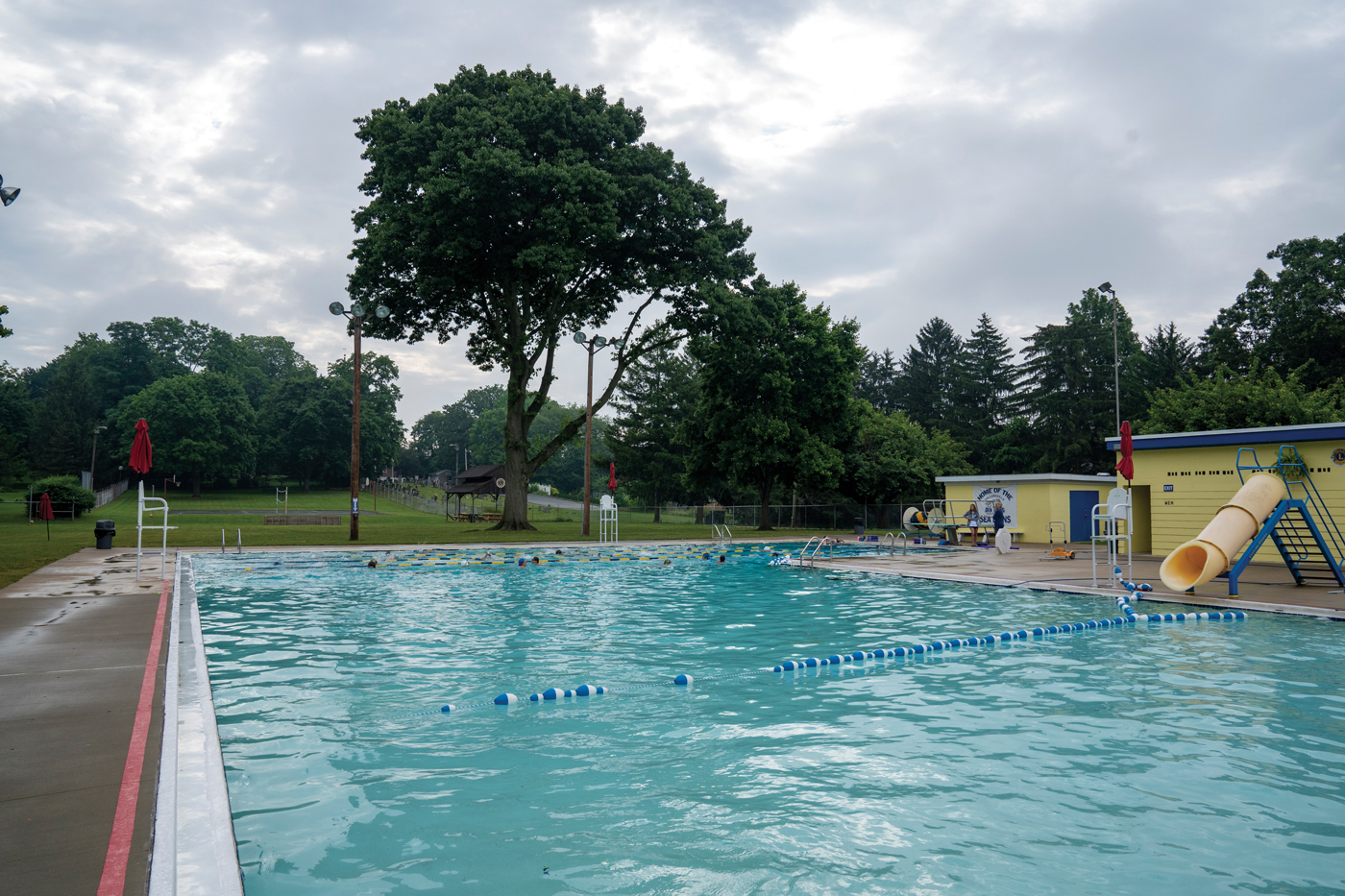 Early summer mornings at the Millersville Lions Club Pool are devoted to swim team practice. This year the team is composed of 130 members ranging in age from 6 to 18.

Pat Benson, who has been the club’s president for the past several years and is the pool’s treasurer, shares that Millersville is only one of two pools in Lions Club International’s District 14-D to have survived the past 50-plus years. According to the club’s website, the Millersville Lions Club received its charter in 1932. As the timing coincided with the Depression, the club’s initiatives centered on helping Millersville residents with medical expenses and needs such as heating their homes. The club also created a college scholarship fund. In the ’40s and ’50s, club members involved themselves in an expanding slate of other community-service endeavors.

The Millersville Lions also became a driving force behind the idea of building a pool for the community. The club went to work to raise $10,000 for the project through fundraising, securing bank loans and selling $100 bonds. The pool was dedicated in 1961, which coincided with Millersville’s bicentennial celebration. After nine years, the pool became self-sustaining, as all bank notes and loans had been repaid. 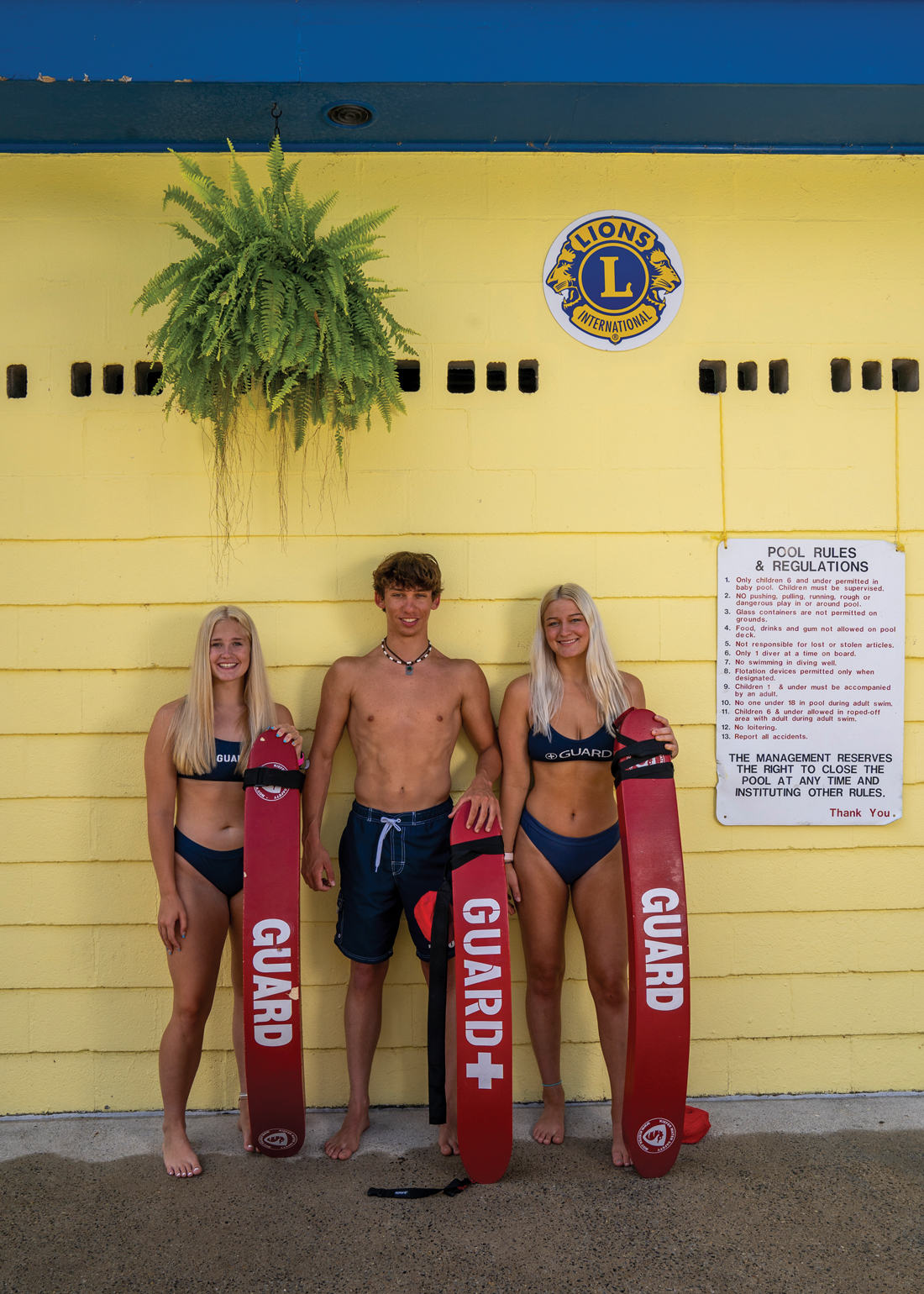 Kari Anderson, Scott Moore and Jordyn Kendig are among the team of lifeguards that oversees Millersville Lions Club Pool, which was voted “Best Pool” in last year’s LCM readers’ survey.

Today, with 47 members on the roster, the Millersville Lions Club continues to be a very active component of the community. “We’d love to welcome more members,” Pat says. “The more members we have, the more we can do in the community.”

Pat says that community support – on the parts of Lions Club members, businesses and pool members – has helped the pool to thrive. “It takes a lot of work to keep this pool operating,” she says. Fundraising helps the Lions Club with the all-important maintenance and improvement projects that keep the pool and its grounds in pristine condition. One such improvement – remodeling the kiddie pool – was carried out several years ago. This year, new umbrellas greeted members. A chair lift for physically challenged swimmers was added thanks to a grant from Lions Club International.

Pat notes that when work is needed for the pool and property, Lions Club members who have experience in plumbing, construction, electric, etc., volunteer their services. Members also volunteer to mow the lawn and take care of the landscaping. “That’s needed on an almost-daily basis,” she reports.

This season, new picnic tables in the pavilion were unveiled – they were a service project undertaken by Millersville University’s Construction Club. The pool’s food stand is operated by members of the Millersville Lioness Club, with proceeds benefiting their service projects. A pool member and his children built a new tether-ball area for the facility.

Banners that are displayed on the fences around the pool convey the support of businesses in the area. “It takes a village!” says Pat, who served as Millersville University’s retail operations manager before retiring. 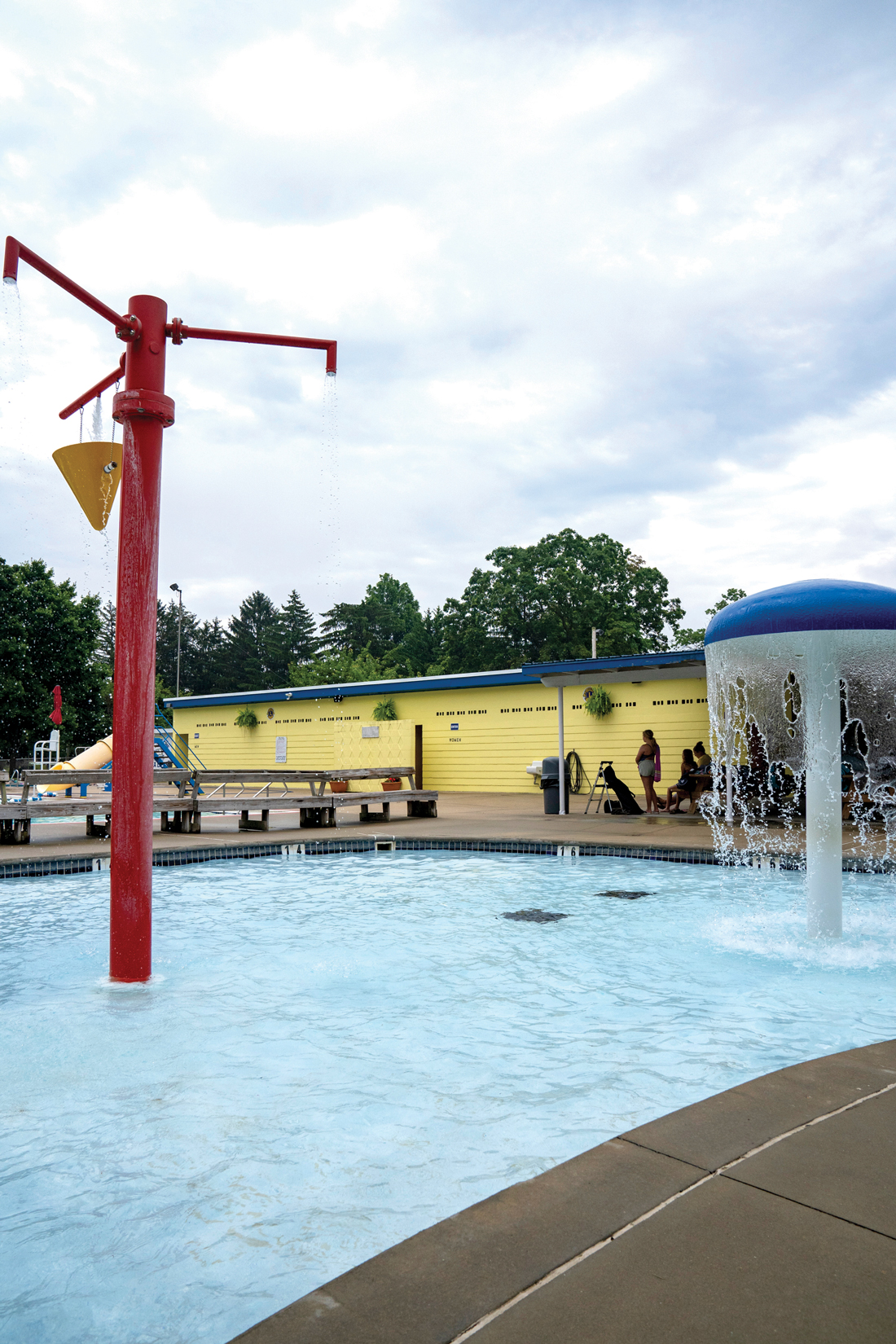 A recent project brought improvements to the kiddie pool.

Dedicated employees also add to the dynamics. Manager Wendy Blake has been on the job for 20 years. Cece O’Day has coached the 130-member Sea Lions swim team (Division 2 in the Summer League) for years.

As the summer of 2022 approached, many pool and beach goers feared they would be spending the summer watching the 1976 cult-classic movie Lifeguard (starring none other than Sam Elliott) or reruns of the original Baywatch television series instead of swimming under the watchful eye of an actual lifeguard. The American Lifeguard Association predicted that one-third of the nation’s 309,000 pools would have to remained closed due to a lack of staffing. Beaches and resorts are also dealing with staffing issues.

Lions Club members in Millersville were admittedly anxious about the looming nationwide dearth of lifeguards that began affecting pools last summer (in many cases, earlier) and was destined to continue in the summer of 2022. The shortage is being felt in Lancaster – especially at the pool in Lancaster County Central Park, which remained closed until early July, due to a lifeguard shortage. Other pools have had to curtail hours on occasion. 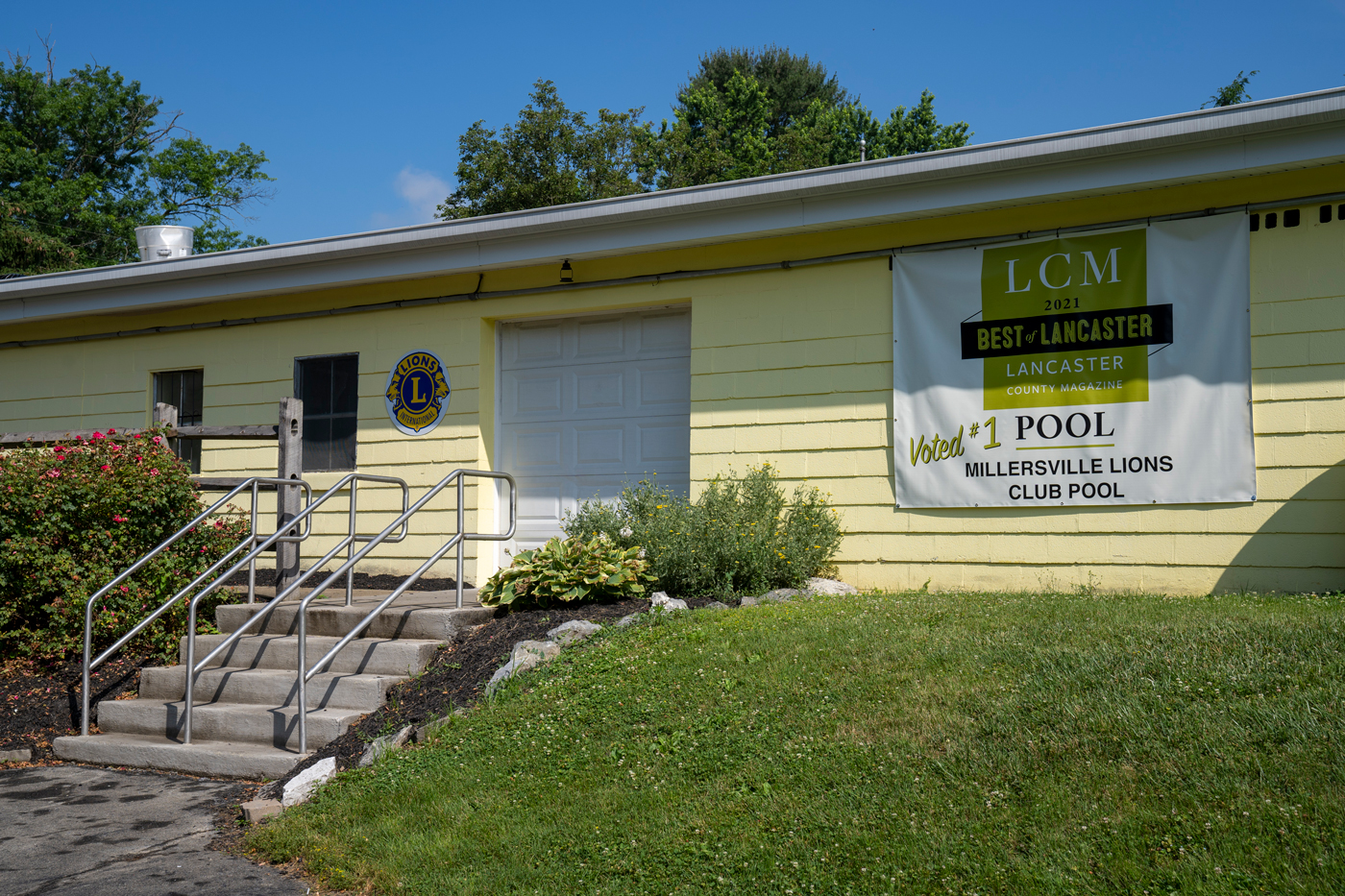 The lack of guards is attributed to the fact that certification programs had to be canceled in 2020 and 2021. Also, in the case of beaches, lifeguards were often recruited from overseas and with the curtailment of work exchanges via J-1 visas, that impacted staffing over that same period. In Philadelphia, the parks and recreation department thought outside the box and launched a recruiting effort through TikTok. One person who answered the call – Robin Borlandoe – is 70 years old and hasn’t guarded since she was 16. In Chicago, opening day for its 77 public pools and 22 beaches was pushed back first to June 25 and then to July 5, despite a punishing heat wave in mid-June. In Indianapolis, only five of its 17 pools have been able to open. In New York City, 516 guards were certified as of mid-June. That represents a 49% drop from 2021 and a 66% drop from 2016. It was hoped that the offer of free certification programs would ease the crunch. Now, as August approaches, pools fear they will have to curtail hours due to the fact that student-aged guards will be unavailable to work because of school being back in session.

Millersville counts itself as fortunate where recruiting lifeguards is concerned. Pat notes that some Millersville guards have been on duty at the pool for as many as four summers. “We not only have our core group, but we have backups who are ready to work,” she says. Three of those guards are pictured on this month’s cover. Kari Anderson, who will be a junior at Penn Manor High School, has been swimming since she was 5. Kari not only guards (this is her second year), but she teaches swimming lessons and is a member of the pool’s Sea Lions swim team. She also swims with the Marauder Swim Club that is based at Millersville University’s aquatic center. 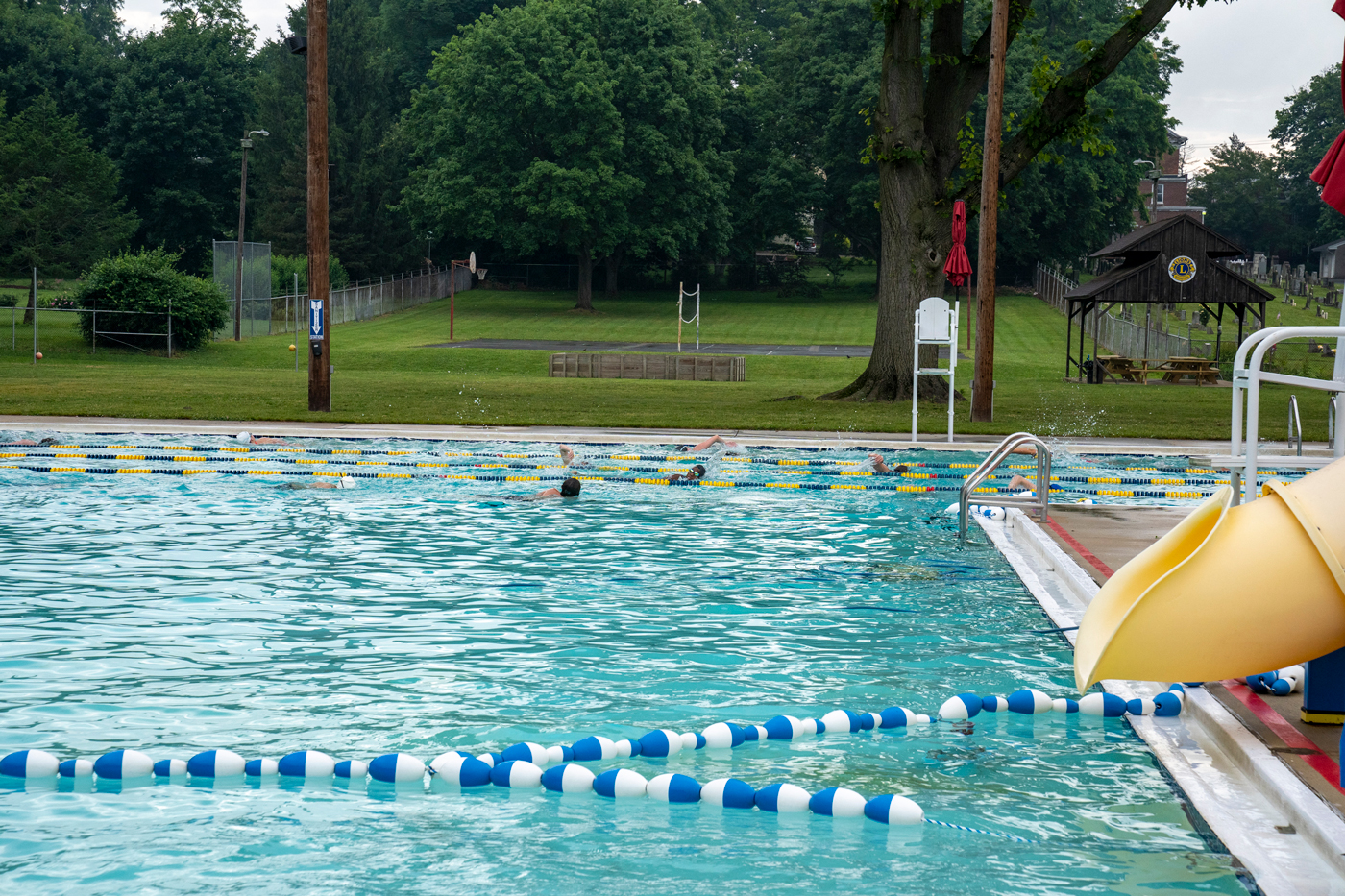 Scott Moore, who swims year-round with the Five Star Swim Club (Lititz recCenter), just graduated from Lancaster Catholic High School. This is his first year at Millersville, but he has guarded at other pools, including SECA in Quarryville. “This is the best job for my schedule,” says Scott, who will be swimming for Penn State this winter and plans to major in aerospace engineering.

Jordyn Kendig is the veteran of the three, as she has been a guard at Millersville for four summers. A graduate of Penn Manor, she is a psychology major at Shippensburg University, where she also swims for the women’s team. “I’ve been swimming forever,” she shares, explaining, “We have a pool at home.” She likes being a lifeguard, as it provides her with the opportunity to be outdoors. “I like working with the kids, too,” she says.

Speaking of being outdoors, Kari assured me that this generation of lifeguards does not slather on the baby oil and iodine concoction that guards no doubt used when Millersville opened in 1961. “The guard room is well-stocked with sunblock and sunscreen,” she says of being conscious of the importance of skin protection. 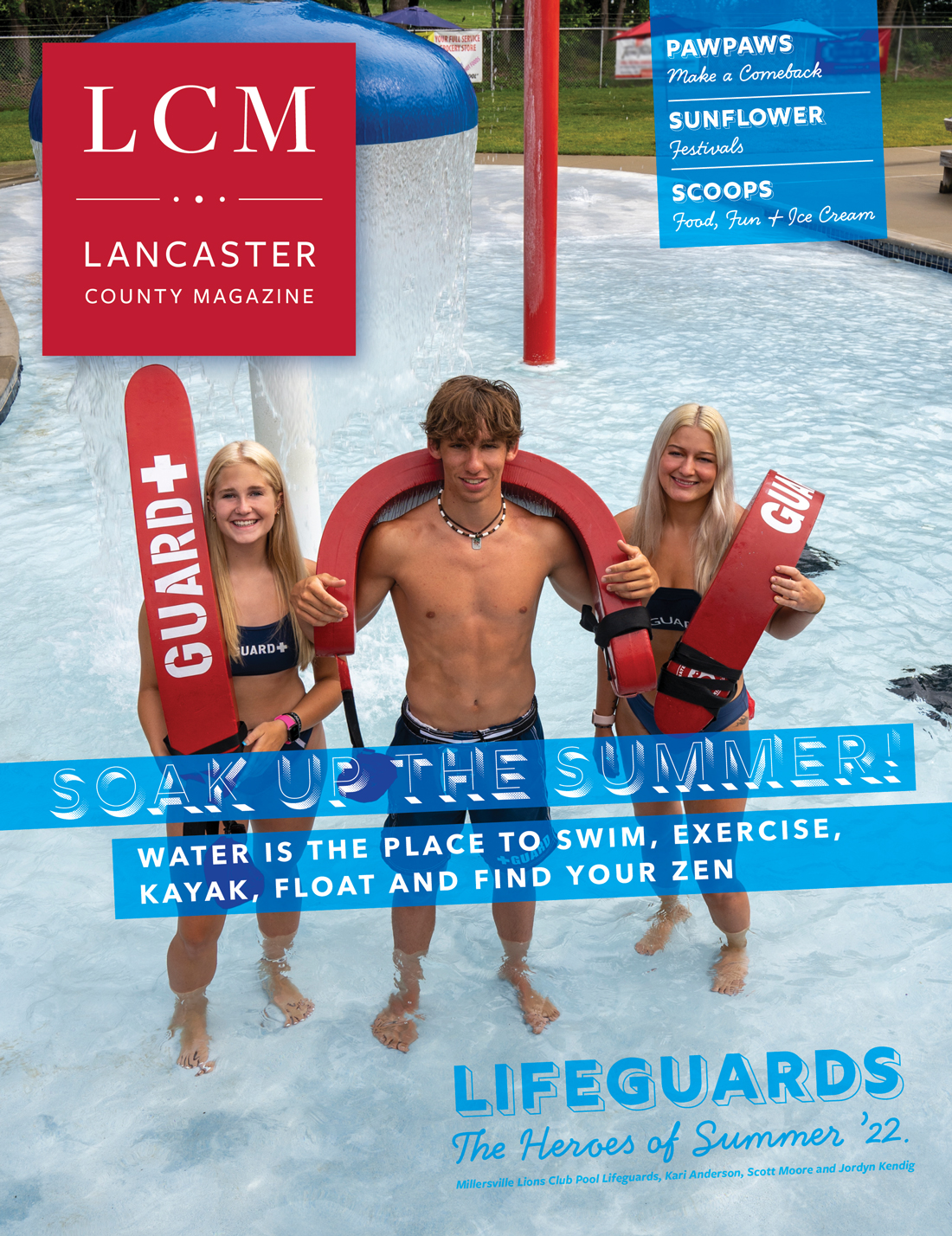 On the cover: Nick Gould photographed lifeguards Kari Anderson, Scott Moore and Jordyn Kendig at the Millersville Lions Club Pool, which celebrated its 60th anniversary in 2021.

Pat and other Lions Club members are proud of the events they provide to pool members, as well as the community. One event that is not pool-related takes place in the spring. The Lions have been hosting their legendary Easter Egg Hunt in a community park since 1954.

Events at the pool kick-off in late April, when the community is invited to help with a spring clean-up. “We’ve had members of the Cub Scouts and the Millersville football team help with that,” Pat remarks.

Each June, the club reserves the first Saturday for Community Day, which is held at the pool. Anyone is welcome to attend. The price of admission is a nonperishable can of food that is then donated to the local food bank. The day is marked with games, contests, kid’s activities and raffles, including one that awards the winner with a family season pass. “People are lined up at the door for Community Day,” Pat says.

This year’s event also reflected the effects that the pandemic and inflation have had on families. The Lions Club elected to purchase 108 40-pound boxes of food from Blessings of Hope that were made available to guests at Community Day. “Anyone was welcome to take one,” Pat notes.

The pool also hosts three splash parties each season. Again, anyone is welcome to attend the party (admission is charged) that includes a DJ, a 50-50 raffle, food trucks and, of course, swimming. “We close at 5 to get the pool ready and people start lining up at 5:30,” Pat says. “It’s always a fun time.”

The season officially closes the Saturday after Labor Day, when Doggie Dip sees four-legged guests take to the water. “It’s just the neatest thing to see,” Pat says of dogs braving the sliding board and diving into the pool. Again, all are welcome to participate. “We have people show up just to watch!” she says. Last year, 126 dogs took over the pool. Each of their owners paid $10 for their dog to participate, with proceeds benefiting the Lions Club’s efforts to fund the training for a service dog that will aid a person in need. “The dog’s name is Jax and we’re excited that club members will be able to follow his training and placement,” she notes of the project. Pat also adds that the official name of the event has been changed to the Mike Schaeffer Doggie Dip, which honors the Millersville Lions Club member who now serves as District 14-D’s second vice district governor.

Early summer mornings at the Millersville Lions Club Pool are devoted to swim team practice. This year the team is composed of 130 members ranging in age from 6 to 18.