Just walking by Modern Art, you are likely to find yourself right in the middle of a work of art in progress or, better still, invited to participate in one. 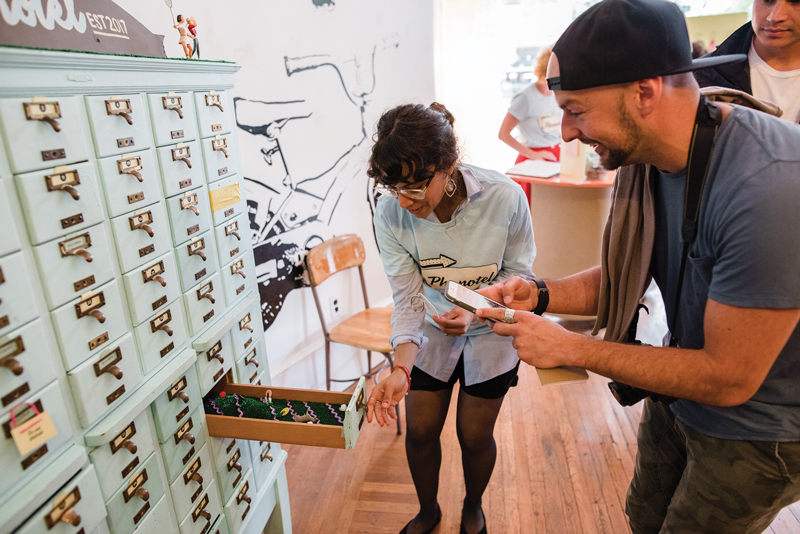 A guest checks his phone into one of the Phonotel’s decorated mini-motel rooms. Photo by Sara Code Kroll. 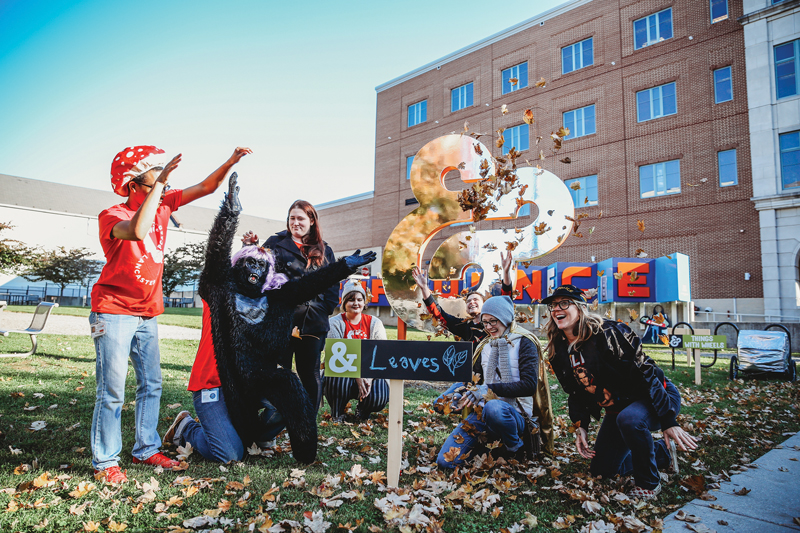 PCA&D artgarden installation, commissioned to mark the inauguration of the school’s new president, features a giant metallic ampersand and garden signs. Intended as “a symbol of forging, building and deepening connections, marking PCA&D’s re-introduction to the Lancaster community,” passersby and students are welcomed to write on the chalk signs. Michelle Johnsen Photography.

The West Chestnut Street studio is half design firm and half communal art studio. The design firm side specializes in the socially responsible/nonprofit community, working with clients like PCA&D, Lancaster Conservancy and the City of Lancaster. The studio side focuses on socially engaged, community-driven art projects and events that strive to amuse, surprise and challenge the way people think.

Libby landed in Lancaster in 2006 with her husband and 1-month-old baby after roving “everywhere from South Dakota to Russia to California.” In San Francisco, she had co-founded a socially conscious design studio called Half-full, working with organizations like Greenpeace. She continued that work, out of her home, after moving to Lancaster, all the while dreaming of a community studio space. During one of the couple’s first nights in Lancaster, they went out for a walk around town. Unbeknownst to them, it was First Friday, and the city was bustling with art and community. “A super nice couple saw us on the corner – we must have looked out of place – and said, ‘New in town, huh? C’mon with us. Let’s go meet the mayor.’ They led us right to Mayor Gray’s house where he was standing outside mingling with the crowds … I loved it immediately,” Libby explains. She had dropped anchor in the perfect place to open her studio. 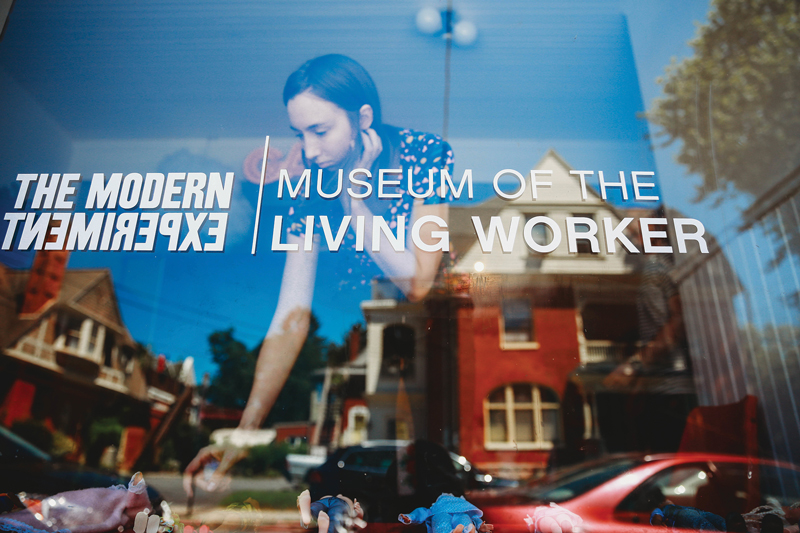 An artist at work in the Modern Art shop window. Michelle Johnsen Photography.

Libby moved into the studio space six years ago and, citing “the help of friends, neighbors and the community,” Modern Art evolved into what it is today, “an interdisciplinary, collaborative art and design studio with the goal of erasing the boundary between studio and the community,” as Libby describes it.

Projects at Modern Art range from creating a fleet of upcycled, free-to-borrow, bicycles (“ArtBike”) to a neighborhood messaging system, broadcasting submitted ideas and thoughts on the shop window (“Word to Your Neighbor”). “The PHONOTEL,” an installation made from an old card-catalog in the studio (in collaboration with Joanna Davis Seedorf), invites you to “Check in Your Phone, Check Out the World,” providing the chance to take a break from the digital and reframe your experience of the world. The project includes phone-free survival guides and even wooden dummy phones to ease your transition.

In collaboration with The Mix at Arbor Place and the City of Lancaster Public Art Department, Modern Art led a group of kids from The Mix through the city on a quest to listen, observe and record their experience. Then they challenged the student artists to create a piece that embodied the sounds of the city. The work was gathered into an exhibit, called “Sound Mixin’: What does our city sound like?” shown at the Lancaster Train Station. 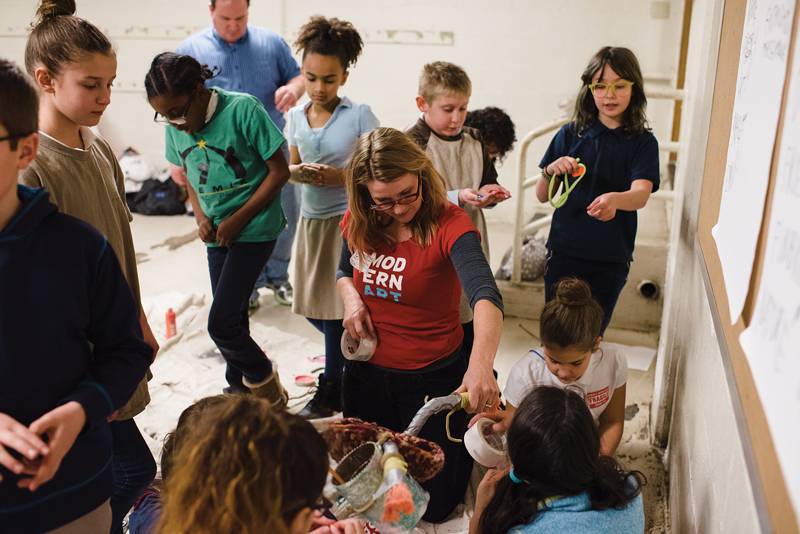 Libby Modern works with students from the School District of Lancaster creating collaborative, conceptual ArtBikes based on issues they’d like the district to address. Photo by Sara Code Kroll.

An ongoing project titled “Museum of the Living Worker” transforms the studio’s window display into a living artwork where artists create, in public view, a piece that includes some audience participation. One installment (in collaboration with Erik Anderson) called “Lancaster Office of Public Narrative” took over the whole studio, transforming it into a DMV-esque office where passersby were asked to share their best/worst/weirdest Lancaster stories; the artist translated them into entries in a print chapbook. The museum project will continue with the “Division of Public Enthrallment,” an installment aimed at involving the community in local government by asking locals to attend City Council meetings and respond with a piece of work inspired by it, culminating in an interactive exhibit.

An upcoming project, “The GREEN SPACE ship” (in collaboration with Jenny Schulder Brant and Mary Schroeder), aims to disrupt the city dweller’s concept and connection with nature and health and includes turning the studio space into a greenhouse oasis and health salon/chai shop. Visitors will be offered an opportunity to participate in events over the course of the two-week installation that challenge their daily habits and thinking while surrounded by greenery.

Whether it’s the sharing of stories and experiences in a creative way or challenging our preconceived notions and turning our perceptions on their heads, the work at Modern Art is aimed at doing what art does best: connect and inspire people.

For more upcoming events, projects and information, check out Itsmodernart.com or Facebook.

PCA&D art garden installation, commissioned to mark the inauguration of the school’s new president, features a giant metallic ampersand and garden signs. Intended as “a symbol of forging, building and deepening connections, marking PCA&D’s re-introduction to the Lancaster community,” passersby and students are welcomed to write on the chalk signs. Michelle Johnsen Photography.