From tall case clocks to Amish furniture, woodworking has been engrained in the persona of Pennsylvania for centuries. A melting pot of influences has shaped the craft since the foundation of the original colony and, while today Pennsylvania ranks only in the middle of labor statistics for employed woodworkers, it is one of the most lucrative regions for those who make their living carving, joining and surfacing wood. 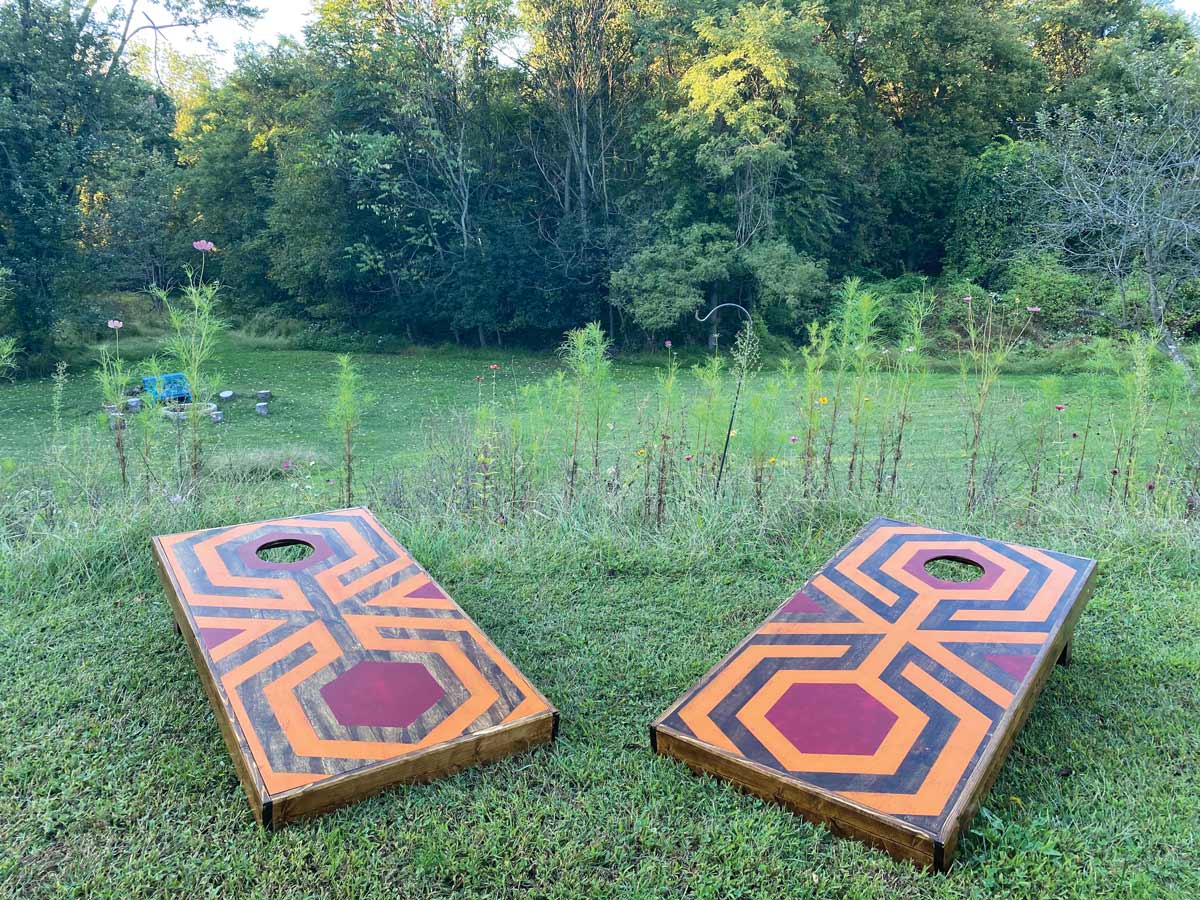 With backyard entertainment growing in popularity because of Covid, Frank’s custom and colorful cornhole boards are in demand.

Furniture regarded as authentic Pennsylvania Dutch dates from around 1720 to 1830 and is characterized as straightforward and direct, a result of colonial necessity. These pieces, containing the earmarks of European craftsmanship from whence the artisan traveled to the new world, are noted for their elaborate joints, resonant colors and resounding strength.

Today’s woodworkers are allowed a more creative flair, a poetic license in lumber. To get a sense of the current state of the craft here in Lancaster County, I found a couple of guys who know the difference between a sliding deadman and a shiplap joint. 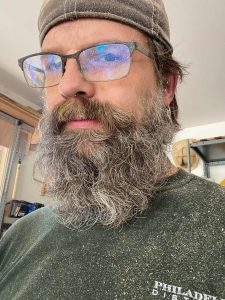 Frank Fontaine has always been into woodworking. Working as Dusty Beards Custom Creations, his company is described as a “one-man workshop building everything from decks and wine lockers to chess boards and shelves.”

However, if you have been around the Lancaster bar scene at all over the past couple of years, you will recognize the man under the bushy beard as one of the area’s premier cocktail creators.

When Covid chased him out from behind the bar he knew he wanted to pursue an art that has called to him since he was a kid. “It’s part of what I went to school for,” explains Frank, who graduated with a degree in theatre and focused on set design and construction at Indiana University of Pennsylvania.

While you can still find him tending bar at Double C a couple days a week, he recognized that as 2020 rolled on, he had to find another income stream. “With the bar world being the bar world as it is now, I knew I needed to find another way of getting by. I thought I’d tap into my other skillset and see if it would be of any use to anybody,” he explains. 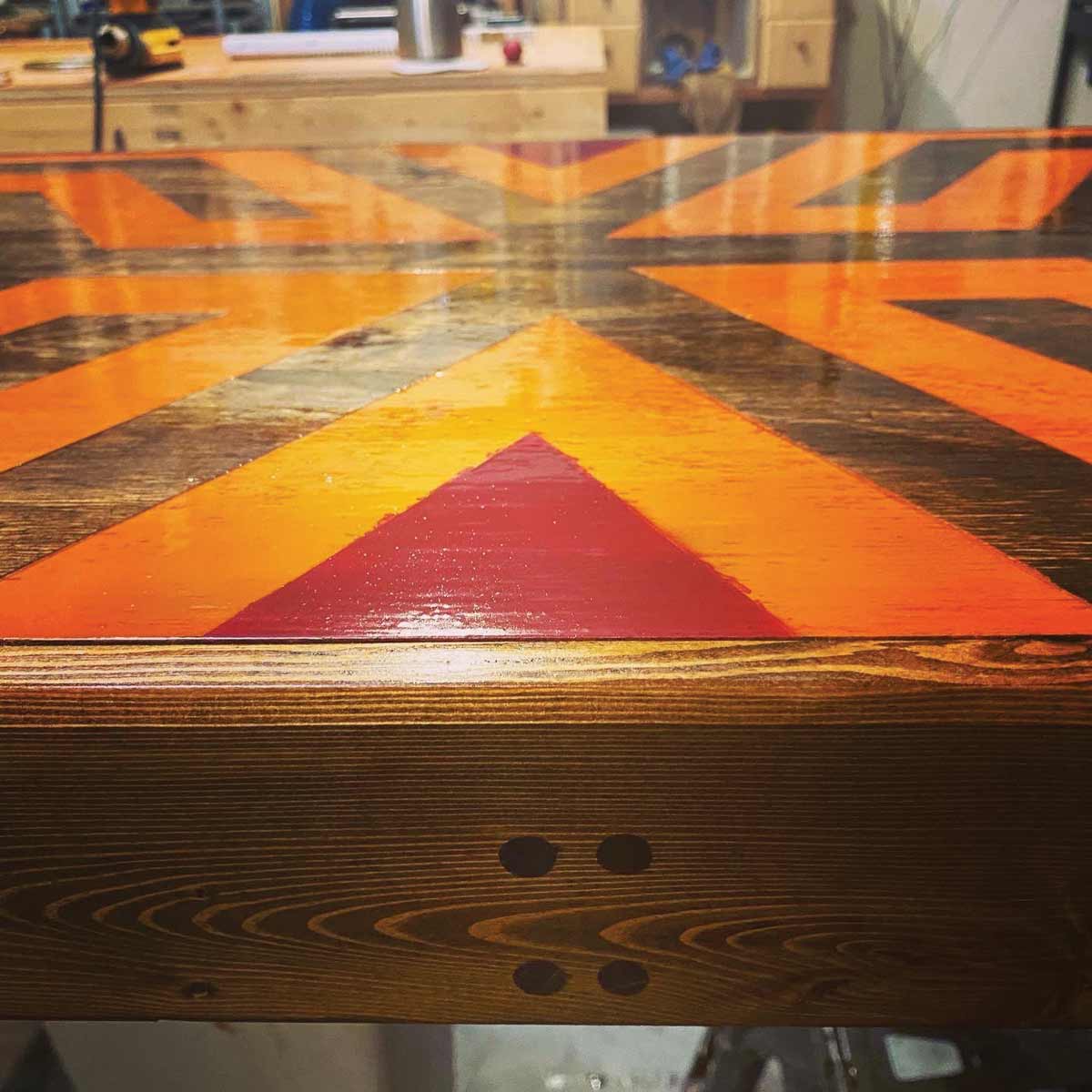 Frank’s biggest project to date is an industrial-sized wine locker for the members of Meadia Heights Golf Club. The structure, made with timber from Groff & Groff Lumber in Quarryville, stands floor to nearly ceiling and consists of 21 lockable compartments each holding up to a dozen bottles of wine. “It’s massive,” says Frank, who was planning to install the piece’s final touch on the day we spoke from his home. “With my background of bartending, I’d love to do more bar cabinets, hutches for home bars, places for people to display their collections and barware. I’ve repurposed old pieces, but now I am working on pieces for more finer décor.” 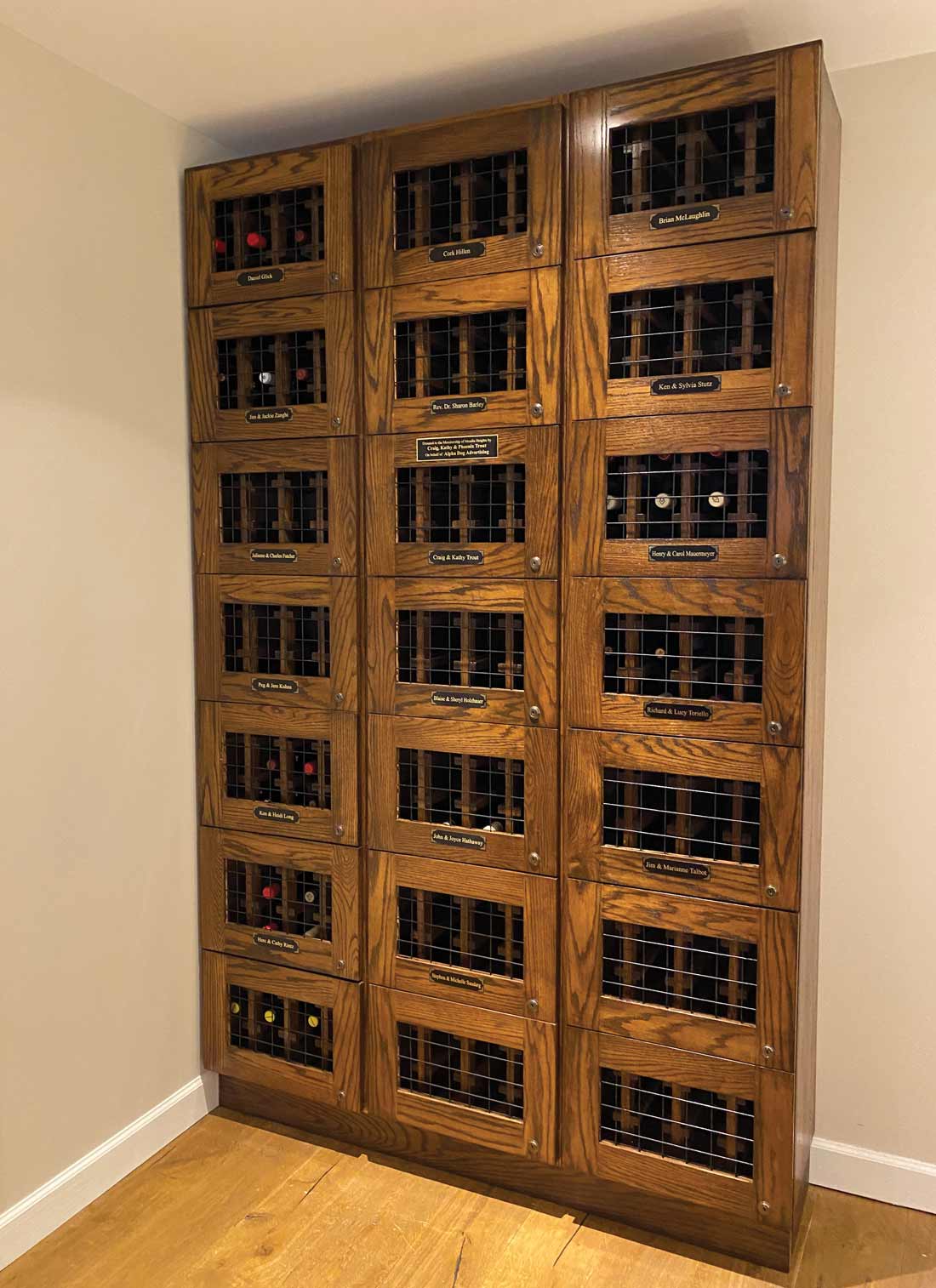 Frank’s most ambitious project to date is a wine locker he crafted for members of Meadia Heights Golf Club.

As far as a finished product is concerned, one of Frank’s favorite woods is walnut; however, he has a love-hate relationship with it. He despises working with the medium-density hardwood because even for Dusty Beards Custom Creations, there is just too much dust from walnut. White oak is his favorite medium and he enjoys creating fingerlap joints or what he calls a “poor man’s dovetail.” 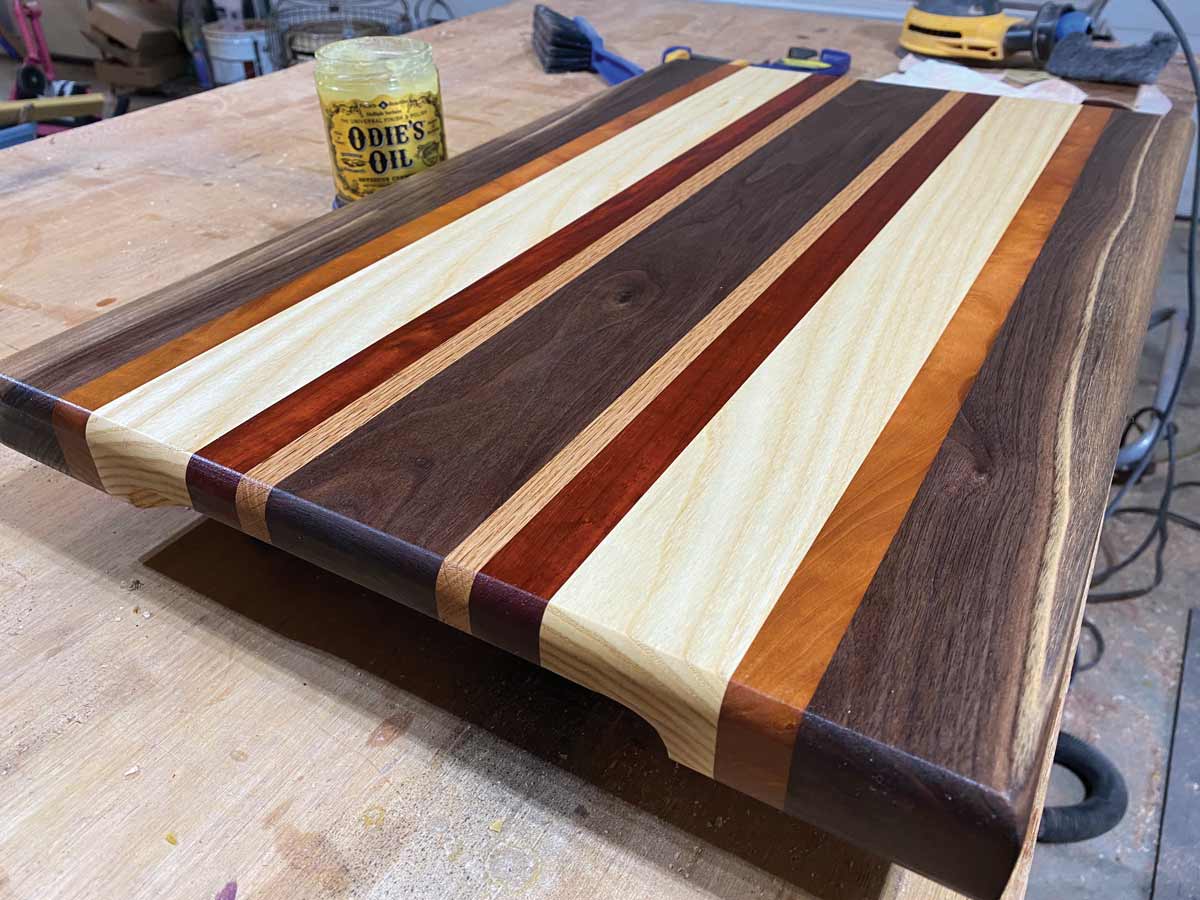 A cutting board crafted from exotic woods.

Concentrating more on woodworking than the bar scene is becoming a priority since he became a father several years ago. He now has a one-year-old, too. “I want to be able to spend as much time with my family as possible,” he says. A desire to be with the young people in his life has led him back to a passion he discovered as a young person himself. 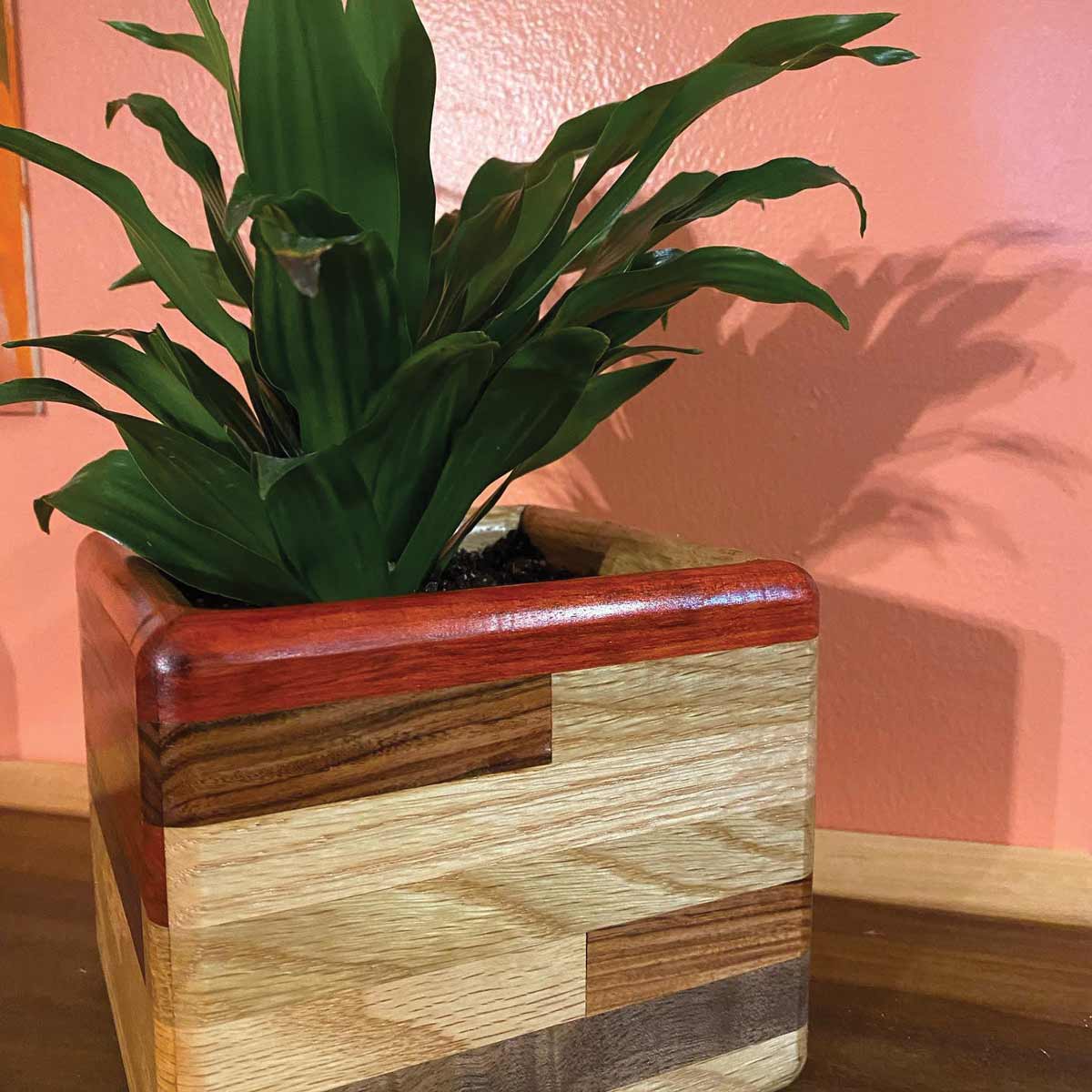 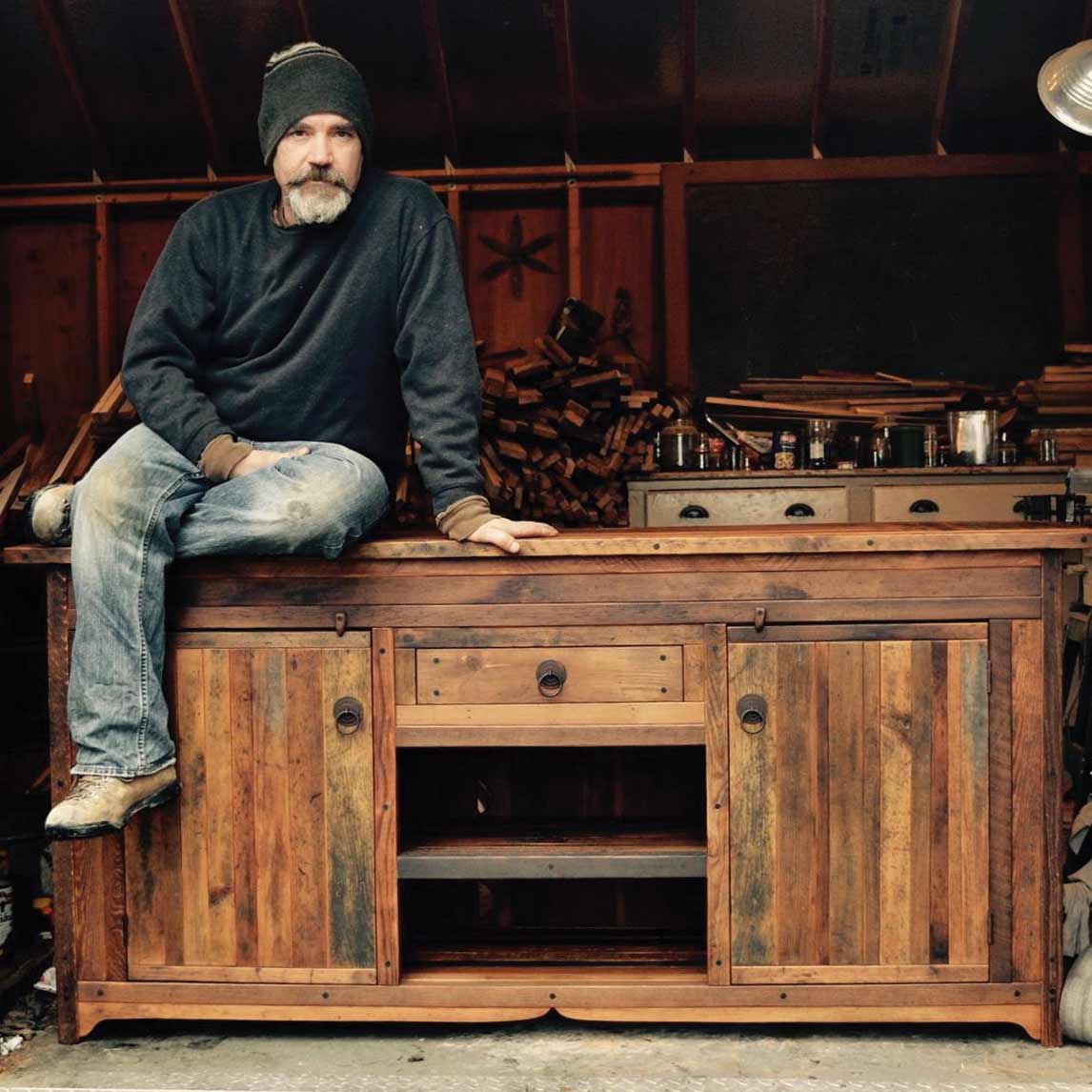 Dan’s designs are also inspired by the Japanese concept of wabi-sabi, in which beauty is seen in nature even though it might be imperfect, impermanent and incomplete.

Dan Dennis’ appreciation for wood also started at a young age. Growing up, he and his father would reclaim lumber from deconstruction projects for use in their home’s wood stove. “One time we ended up salvaging a lot of wood from an old barn that turned out to be useable lumber,” says Dan, remembering the early days of his life in Lititz.

Dan, who is the son of missionary parents, actually grew up in Japan, where he gained an appreciation for the concept of wabi-sabi – an aesthetic that is sometimes described as “one of appreciating beauty that is imperfect, impermanent and incomplete in nature.” It still inspires his work today. 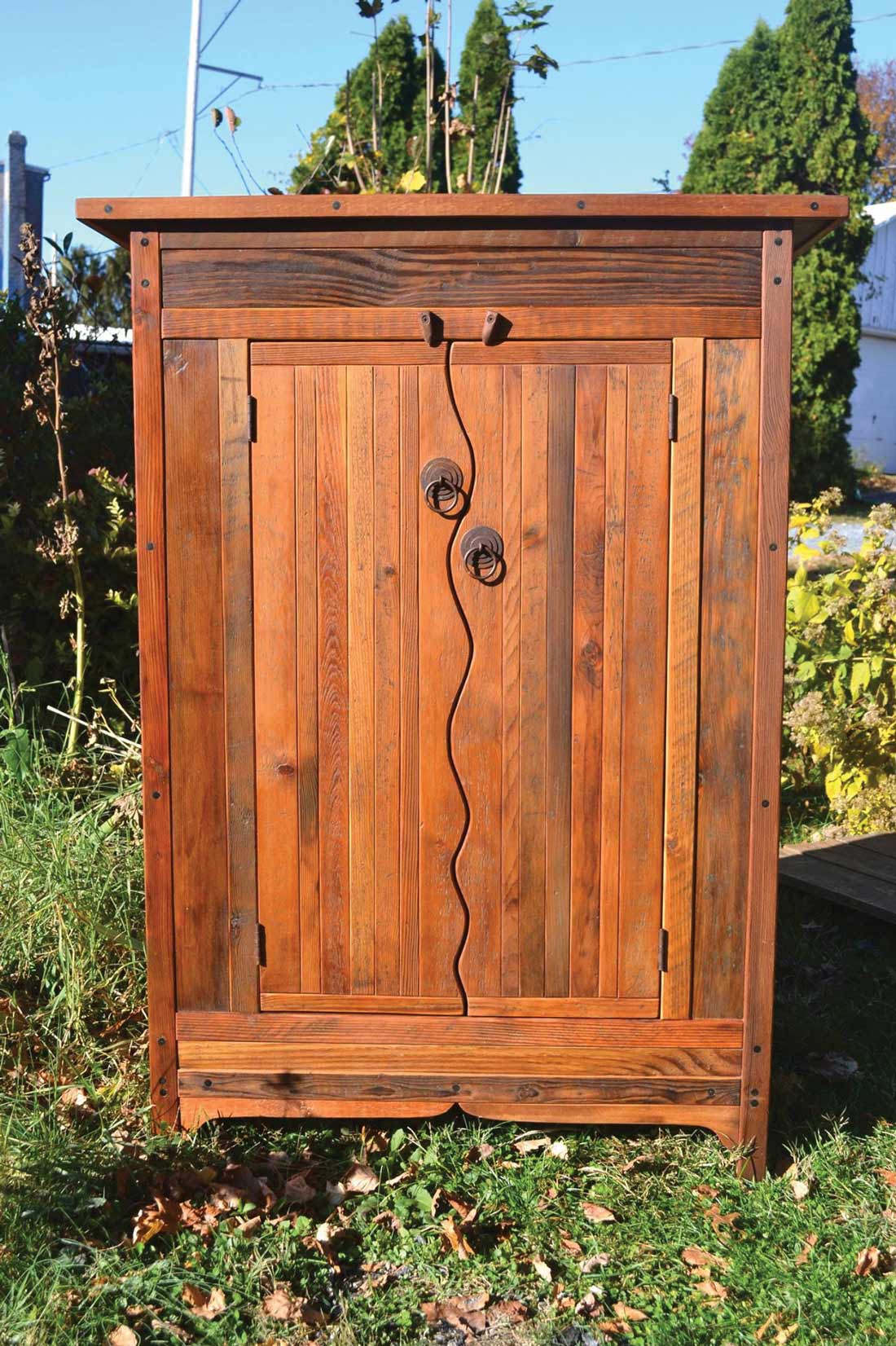 Made from materials salvaged from dismantled barns, Dan Dennis’ free-standing cabinets fulfill a myriad of storage purposes. They also are built using his signature curved-door design.

For his first piece – a cabinet for a TV – he worked with what was available, fashioning doors from old shutters and piecing something together from his own creativity. “Someone else liked it. Then, someone else wanted one and it has been a really slow-moving snowball over the years,” he recalls.

Woodworking slipped to the wayside as he traveled the world with stops in England, Israel, India and Nepal. Returning stateside, he graduated from Millersville University with a degree in English, but he never had any passion for what the degree enabled him to do professionally.

About 20 years ago he stumbled upon Pennsylvania Guild of Craftsmen shows and his inspiration grew. “I think I would be classified as a folk artist more than a craftsman,” says Dan, whose only formal training was a seventh-grade woodshop class. “It’s 100 percent self-taught mixed with little tips I’ve learned from people over the years.” 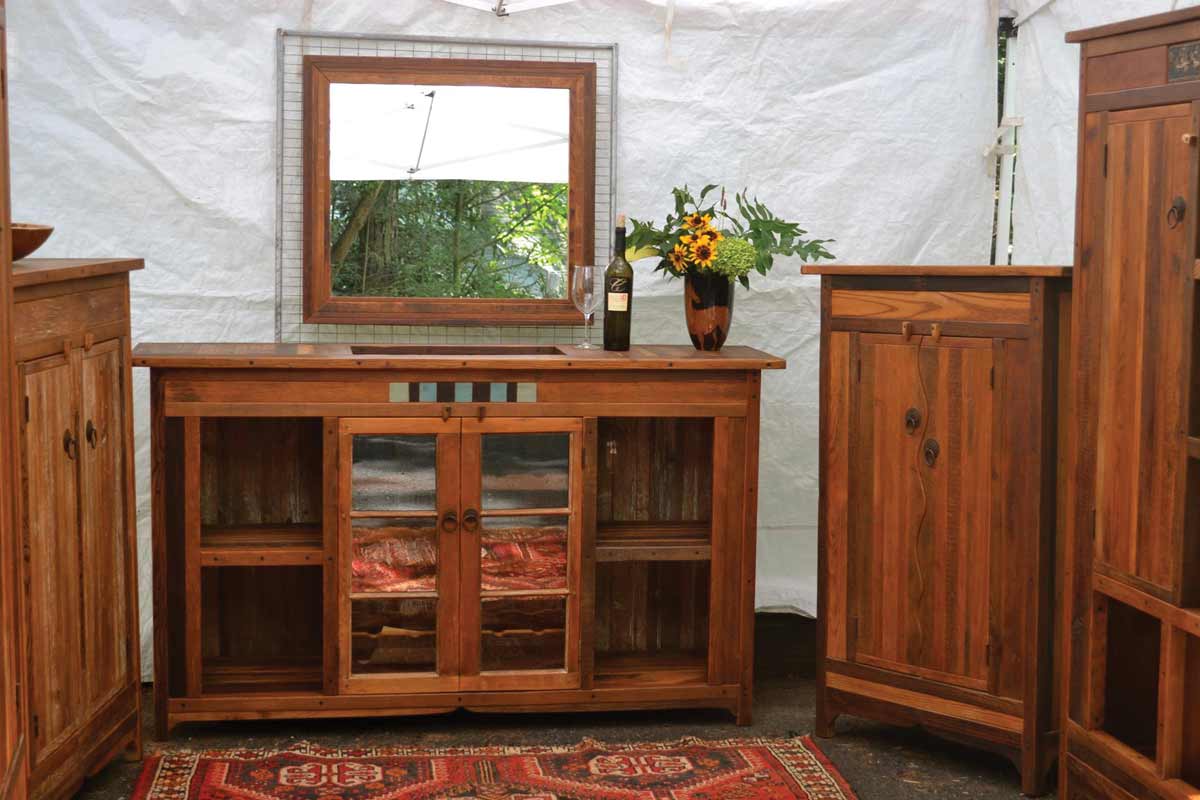 Dan has also expanded into cabinetry that is perfect for holding televisions, DVRs and other electronics.

Dan’s business name says it all: Lancaster County Barn Art. He specializes in repurposing local, salvaged material, all of which comes from dismantled barns. To obtain his materials, he relies on a small network of contacts who are often happy to trade a truckload of lumber for a day’s worth of labor.

Then he works his magic and turns barn boards and rafters into works of art, primarily free-standing cabinets with signature curved doors. This hallmark of his design harkens back to wabi-sabi. “I’ve learned to leave certain knots where they are,” explains Dan. “You have to develop an eye for how you want your world to look. There’s no rule that doors have to be square, for instance.” 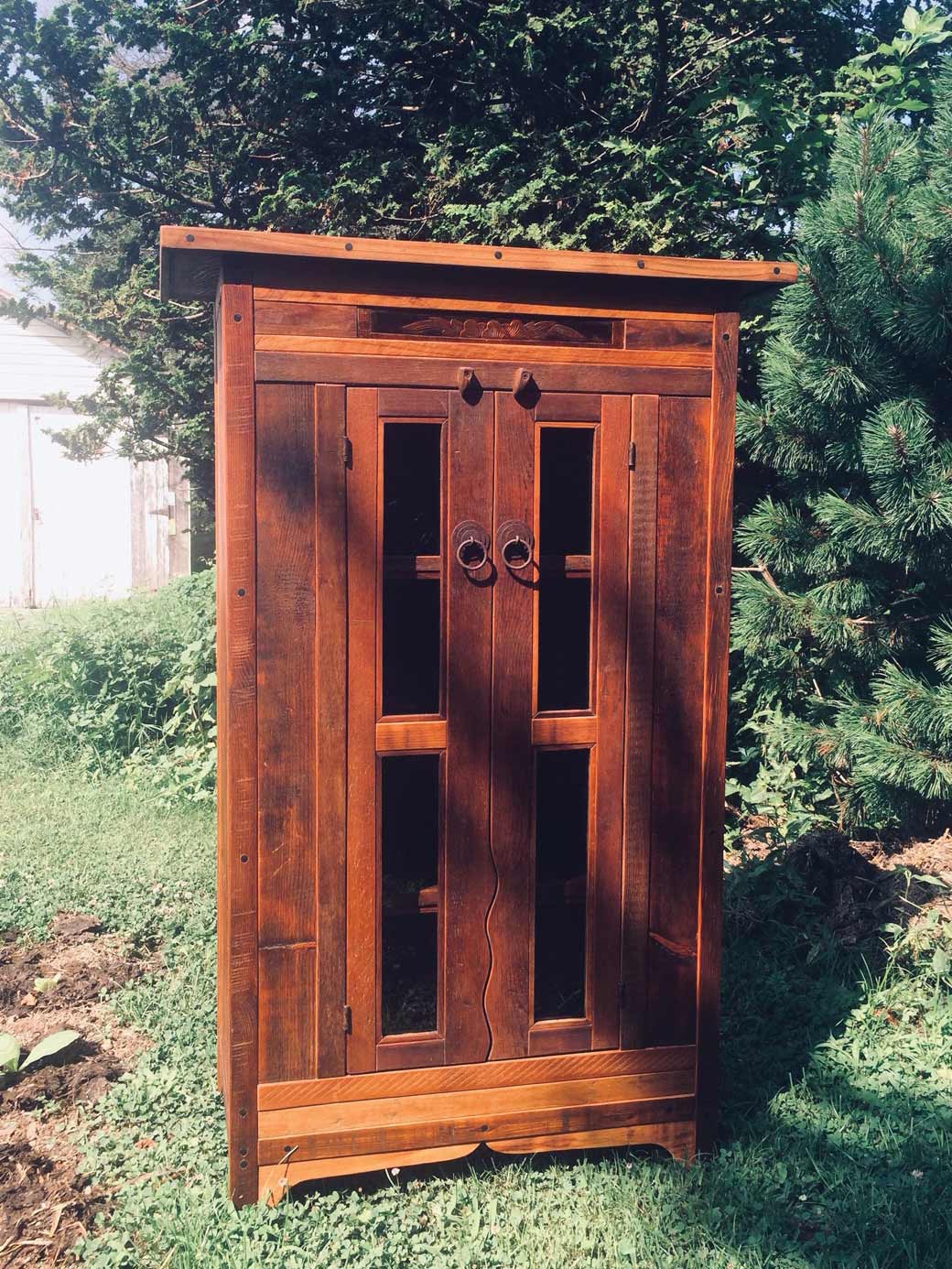 While many of Dan’s designs take their inspiration from furniture such as armoires, he considers himself to be a folk artist as opposed to a woodworker.

He also draws a lot of inspiration from modern folk art. He builds on themes. And he builds what sells; over the years he has come to recognize which pieces people like to buy, and his curved-door cabinets are one of those things.

He also creates commissioned pieces for friends and clients, including the 10-foot table he recently finished for a Delaware family made from floorboards of a home built by writer Upton Sinclair circa 1900. So, maybe the English degree paid off anyway!

With backyard entertainment growing in popularity because of Covid, Frank’s custom and colorful cornhole boards are in demand.