For the last decade, scientists, chemists, researchers, environmentalists, universities, physicians, manufacturers, bio-tech companies and food producers have been studying and creating new ways to make the world a better place. How? They are utilizing mushrooms in ways that extend way beyond pizza! 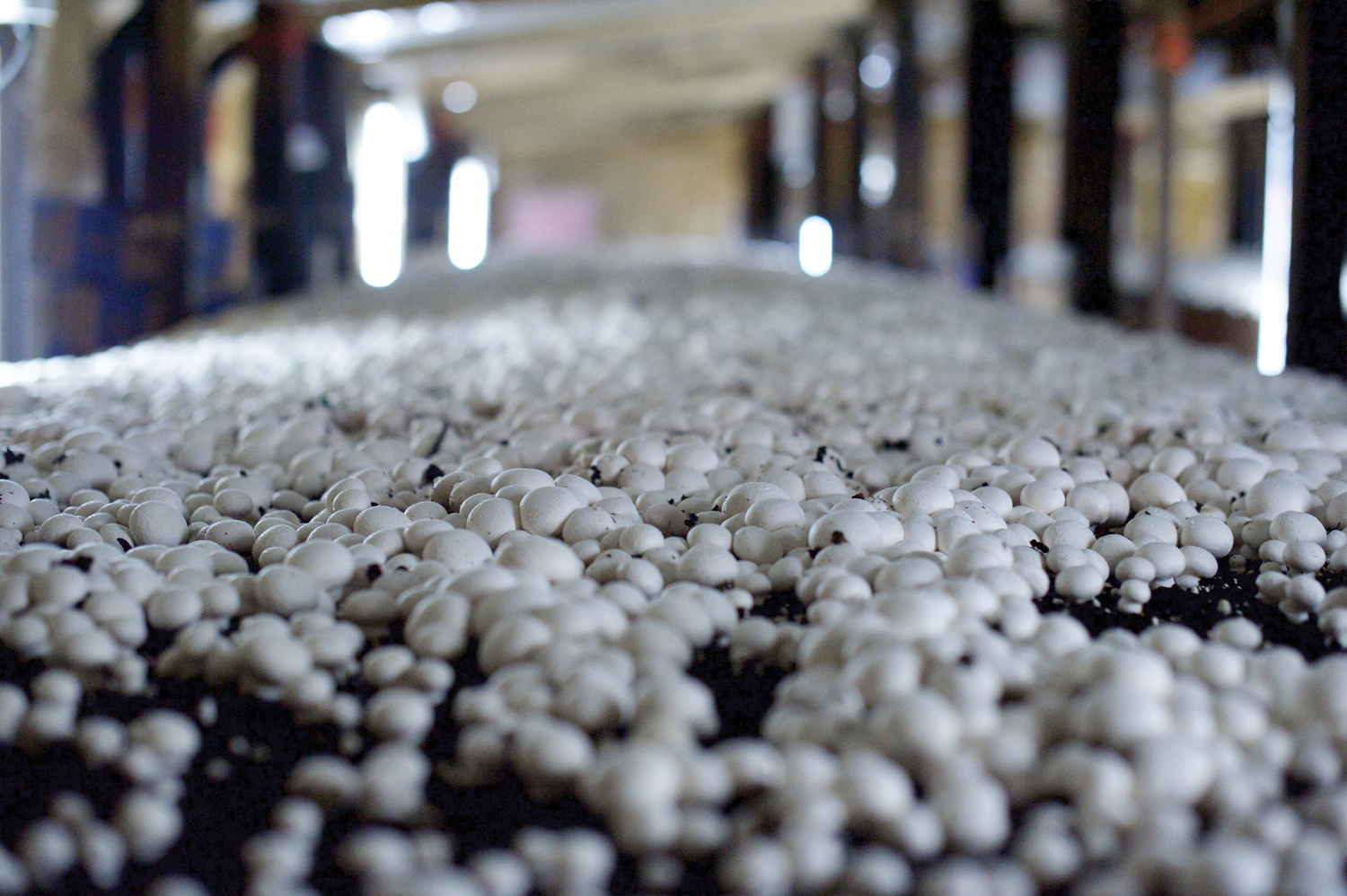 White Button mushrooms, shown here in a growing rack, account for 90% of commercially grown mushrooms in the United States, according to The Mushroom Council.

One of the more unique places my camera has taken me is to mushroom houses. You’ve probably “caught wind” of these concrete block structures around Kennett Square, Avondale or north of Reading. In fact, the area around Kennett Square leads the nation in mushroom production. FYI: Kennett Square’s 37th annual Mushroom Festival is scheduled for September 10-11. If you’re ever in the Kennett Square area, be sure to visit The Woodlands at Phillips Mushroom Farms, which features an all-things mushroom store and a museum. Needless to say, mushrooms are readily found on the menus of area restaurants. 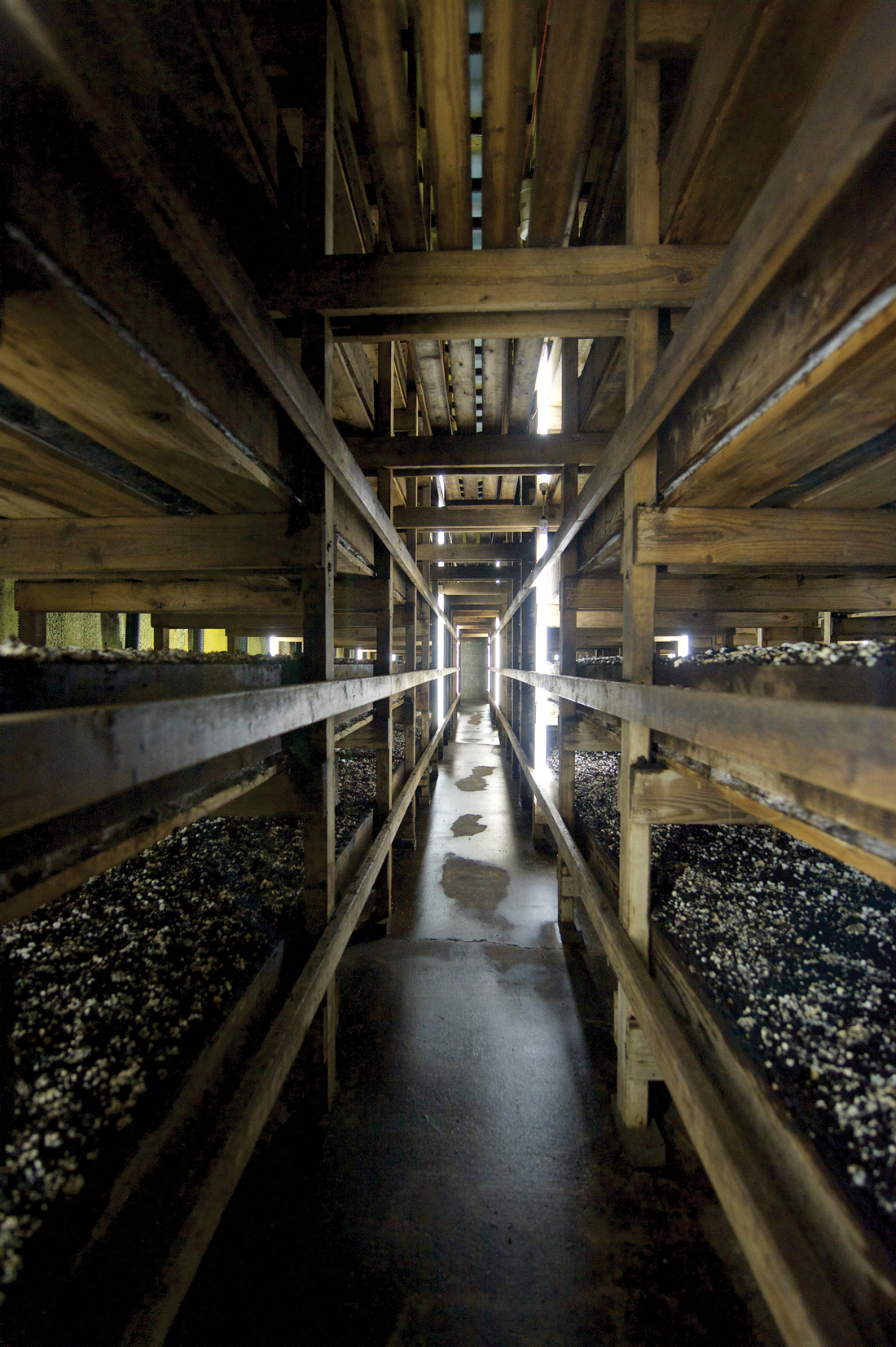 A fascinating history, Kennett Square’s mushroom industry traces its origins to the Quakers. Seeking to utilize the space beneath the carnations they grew, the Quakers turned to mushrooms. Sharing knowledge with one another started out of necessity and soon created communities of mushroom growers. Culturally, Italian and Mexican workers have contributed to the long success of mushroom farming in that area of Chester County. Today, families of growers are connected and even related to one another. 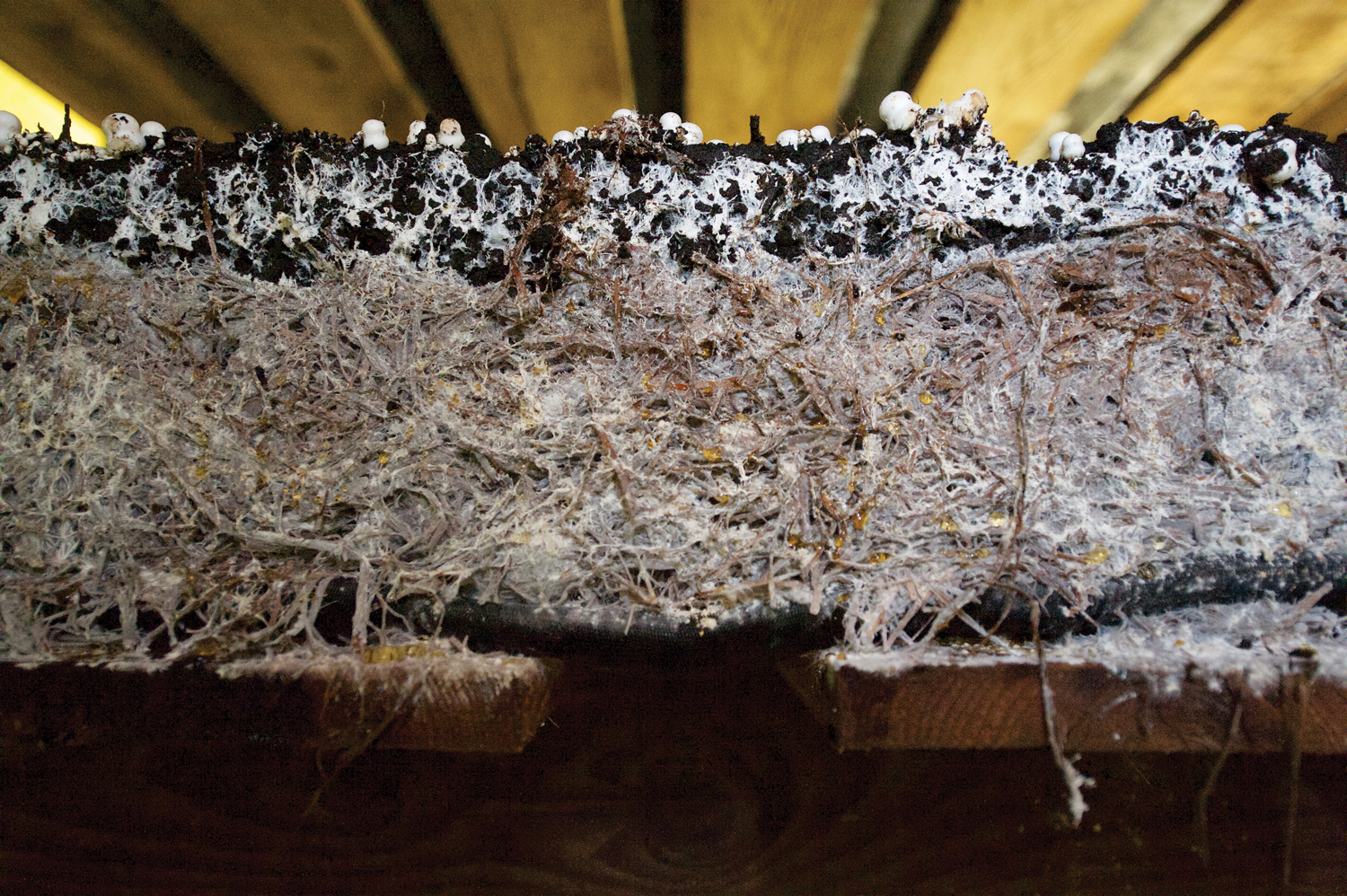 Mycelium, the fungal network growing through compost, is what produces mushrooms above the surface. Keeping compost at an even depth helps maintain consistent size and growth.

A term you’ll hear often in the mushroom kingdom is mycelium. Growing underground, the secret to mushrooms lies beneath the surface. Starting life as a single spore, mycelium spreads in decaying wood or underground through soil or compost, forming a hidden network of fungi that sprouts mushrooms above. According to Oregon Public Broadcasting, the Blue Mountains of eastern Oregon are home to the largest organism in the world. Colloquially known as the “Humungous Fungus,” this single mycelium network has spread to cover over three-square miles. The variety is defined as the Armillaria fungus, or the Honey Mushroom, and, based on its slow growth rate, is estimated to be thousands of years old.

Commercial production of mushrooms typically happens in grow rooms and mushroom houses – also known as “doubles” – where compost offers ideal conditions for mycelium to grow and spread throughout the loosely packed medium. Often made of hay, nitrogen and corn cobs, you might be surprised – as I was – to learn local compost might even include cocoa shells from Hershey Co., which maintains a goal of zero-waste-to-landfill (ZWL). To prevent other organisms from taking over in a mushroom house, compost is pasteurized in mushroom beds before being inoculated with mushroom spawn, then cased with peat moss, limestone and water. 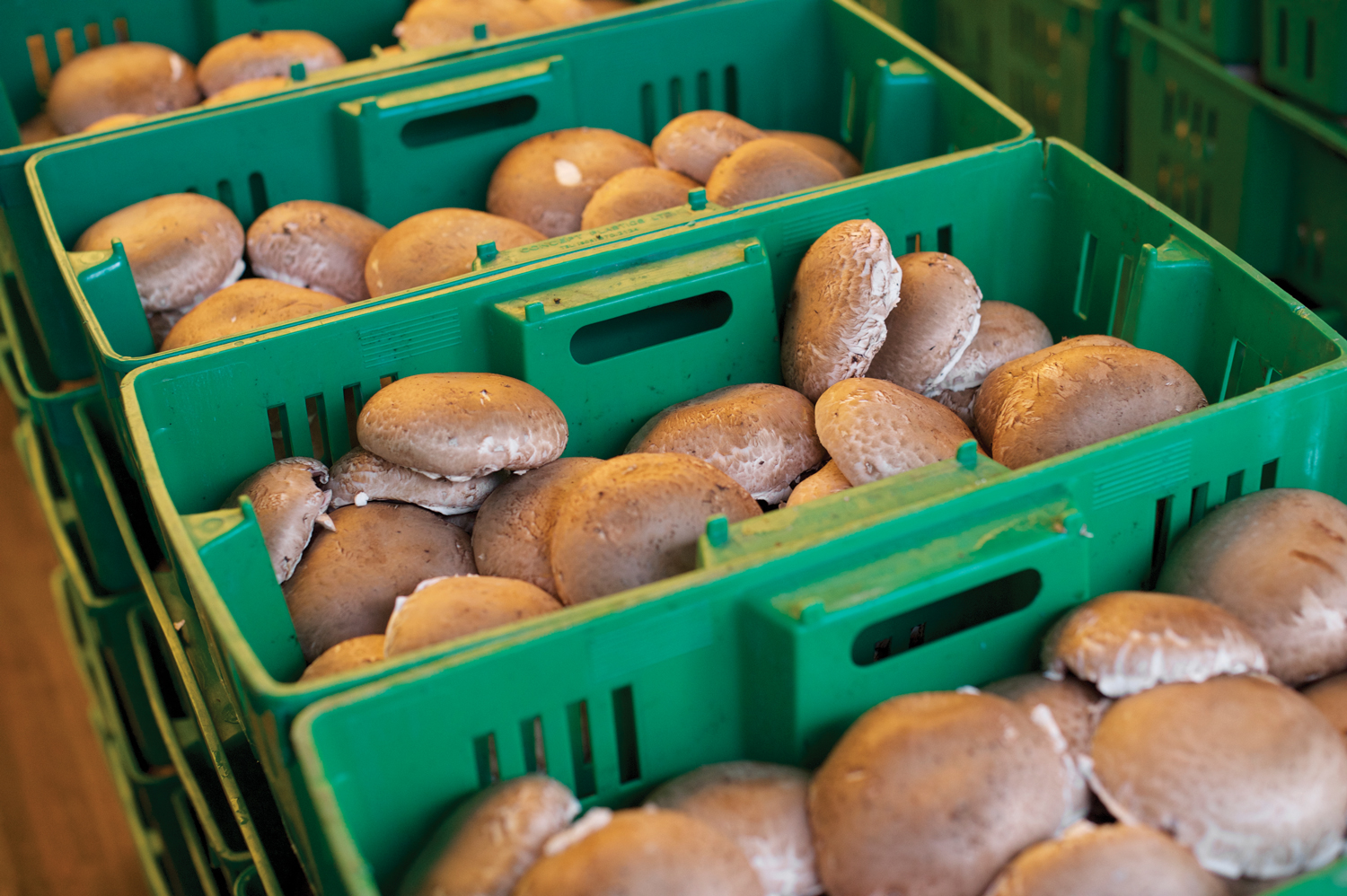 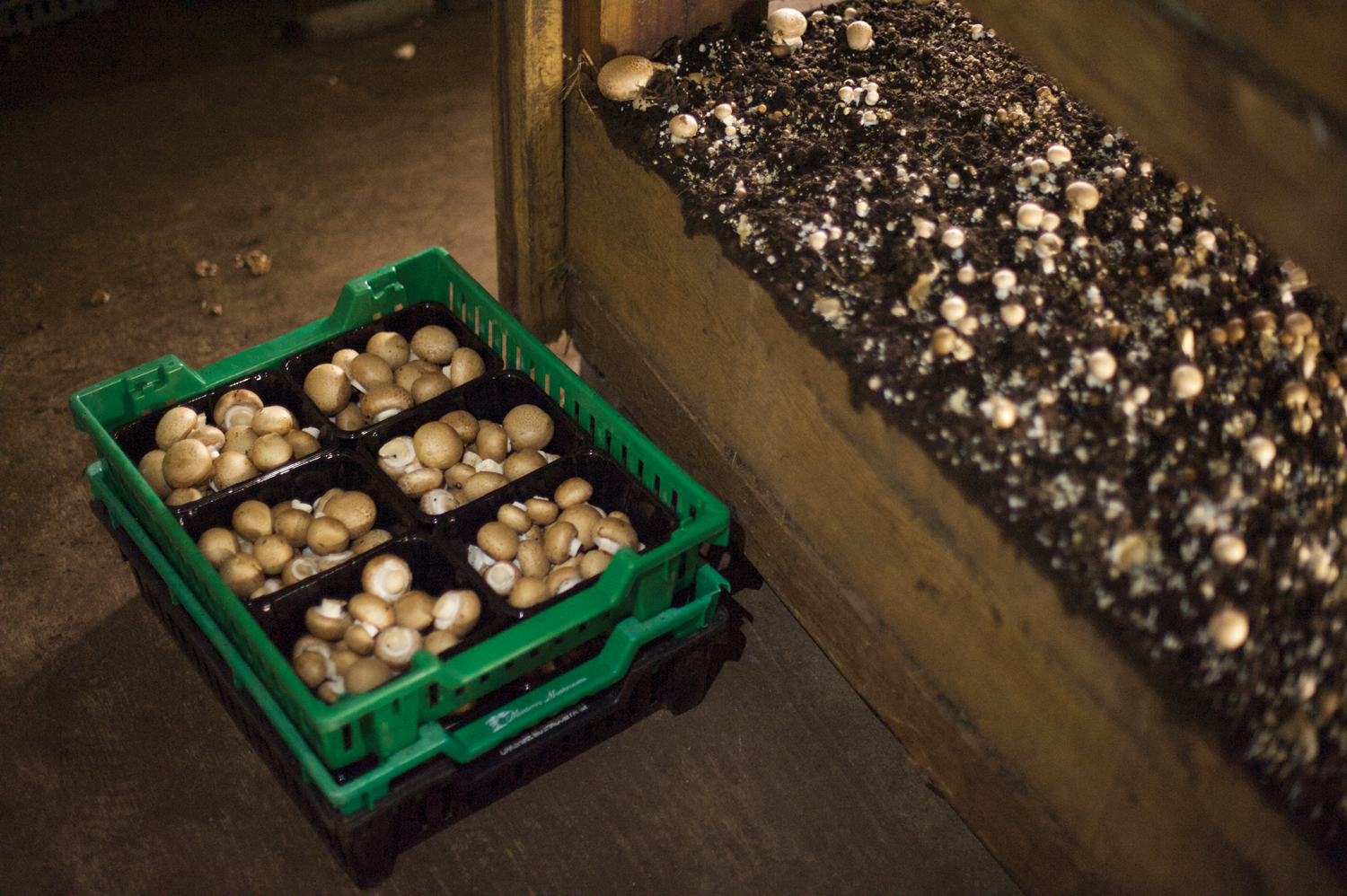 Portobello mushrooms are the most mature and largest of the same variety as younger (below) White Button and Baby Bella mushrooms.

Kept dark, humid and at temperatures around 60-65 degrees F, mushroom beds can first be harvested within a few weeks to months later depending on the variety. Illuminated by headlamps attached to their hard hats, workers hand-pick mushrooms early in the morning, after which they are immediately cleaned and packed.

The mulch represents just the tip of the iceberg in how mushrooms are being studied and used to better the world. For example, the London-based company, Biohm, has created a mushroom-based building insulation – Mycelium Insulation – that, according to the company’s website (biome.co.uk) outperforms the thermal qualities of standard insulation. The company’s other mushroom/agricultural-waste-based product, Organic Refuse Biocompound, is 100% biodegradable, vegan and renewable and can be used in a variety of applications for building purposes.

Still other companies such as furniture and home décor giant IKEA are experimenting with mycelium to create eco-friendly replacements for plastic, Styrofoam and other packaging. While such products resemble Styrofoam and recycled pulp cardboard, they are biodegradable. Products to fight pollution – including oil-absorbent booms used to clean up oil spills – are being developed using mycelium-based technology. 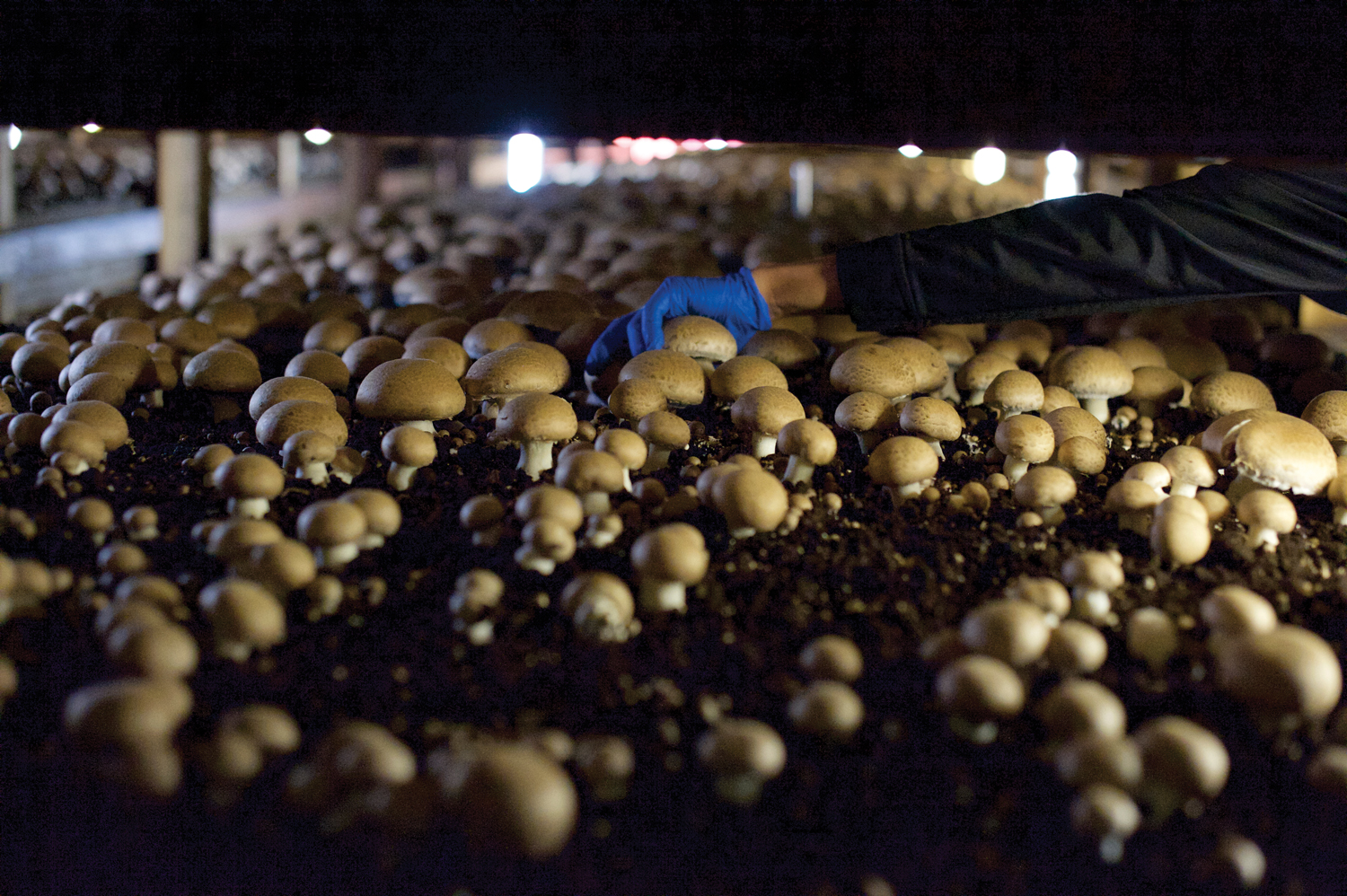 Two years ago, The New York Times asked whether mushrooms are the future of wellness. Indeed, the health benefits of mushrooms have been long touted by Eastern medicine since they are low in calories and are packed with vitamins, minerals, nutrients and antioxidants. Mushroom extract and powder, made into capsules or mixed with hot water to create a mushroom broth or “tea,” are popular forms to increase mushroom intake.

Mushrooms – notably the Cremini – are an excellent source of the new-favorite nutrient, zinc, plus they stimulate the production of macrophages, which boost the immune system. They are also sources of potassium, copper and magnesium. Mushrooms also help to absorb and eliminate waste in our systems.

As Peter McCoy, the author of Radical Mycology: A Treatise on Seeing and Working With Fungi, aptly put it: “Fungi are nature’s greatest chemists.”

In Asia, mushrooms are considered a “fifth taste” or “umami,” as they impart a savory, woodsy flavor to food. There are thousands of varieties of mushrooms in the world, but domestically, the most commercially produced mushrooms center around three variants: White Button, Baby Bella (Cremini) and Portobello. What might come as a surprise is all three are the same variety of mushroom (Agaricus bisporus) but are harvested at different stages. Each has a different use in the kitchen.

Being the most mature, the Portobello has the least moisture content, is the most expensive of the three and is often used as a protein substitute. Baby Bellas and White Buttons are higher in water content, so when frying, water is released as steam as soon as they start to cook. A hot pan with a pinch of salt aids in the release of water, helping the moisture to evaporate. Reducing the temperature and frying mushrooms for 15-20 minutes after removing moisture will caramelize them to a golden brown. Rich in color and flavor, they are perfect for soup. 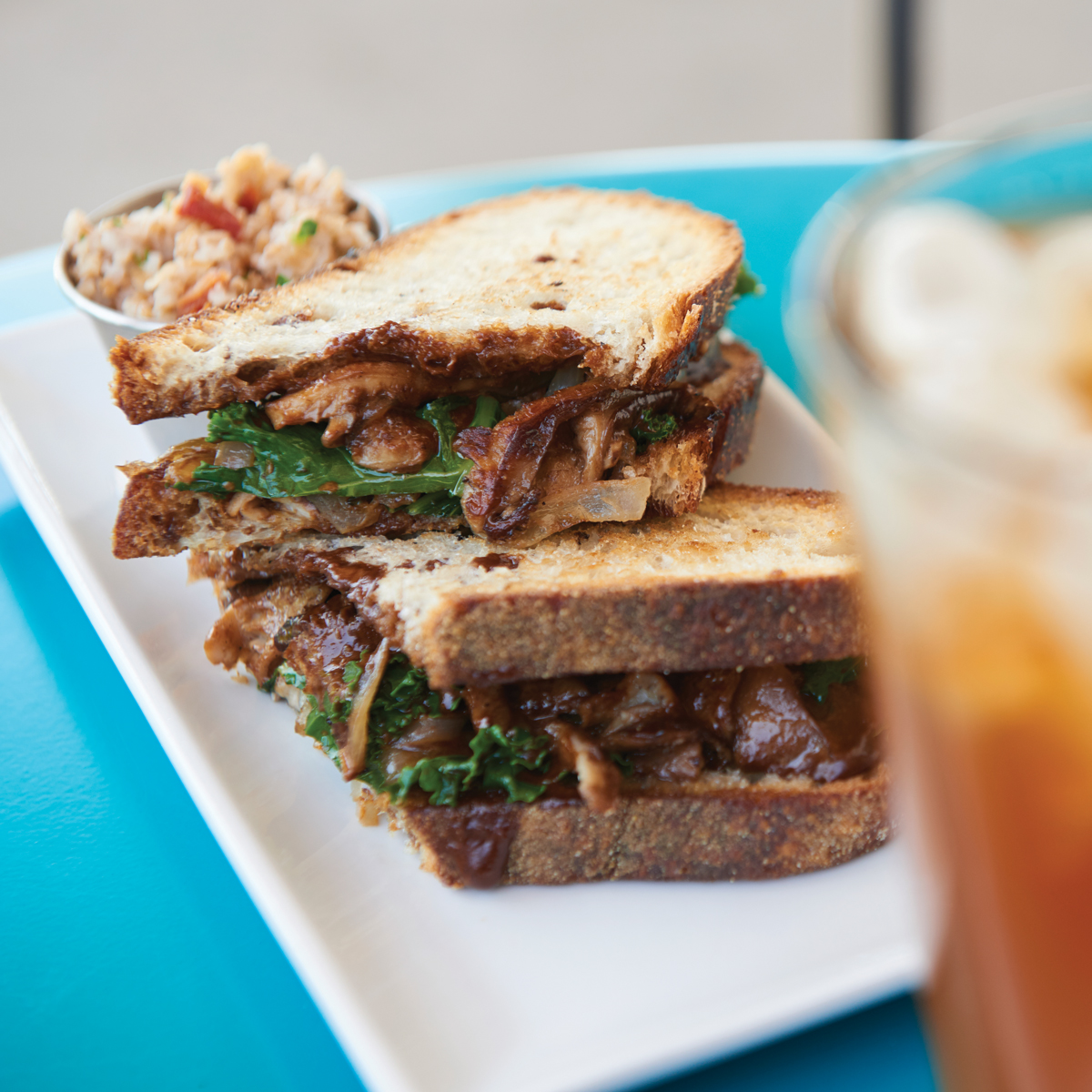 Mushrooms can be roasted in an oven or on a grill with oil and salt. For a party appetizer, larger mushrooms can be battered and fried like poppers or a blooming onion using Maitake. Caps can be stuffed with cheese, butter, oil, seasoning, sausage or bacon.

Dry varieties of mushrooms can be used as a direct meat or even bread replacement. Shiitake mushrooms are an excellent meat alternative. MyForest Foods Co. (myforestfoods.com) has developed MyBacon® Strips, a bacon alternative using mycelium. The company promises that “from the sound of the sizzle to the snap of that first bite – we satisfy every aspect of the bacon-eating experience.”

Blending chopped mushrooms with ground beef in burgers adds flavor and texture while being a useful recipe tip for portion control and to stretch ingredients. When basted in butter with thyme and onions, thicker mushrooms can be prepared like a steak.

Shaved black truffles and truffle butter or oil pair nicely with pasta or potatoes, gnocchi, eggs and cheese. The bitter, earthy flavor is acquired and coveted for its satisfying umami characteristics, for which I’m still developing an appreciation.

If you’re not going to use store-bought mushrooms immediately, keep them in an open paper bag in the refrigerator. If left in airtight packaging, they will not be able to breathe, will bruise quickly and develop a wet, slimy film.

When it comes to foraging for mushrooms, knowing what varieties are safe to pursue is critical. Wild mushrooms can be toxic, even fatal, but there are safe, choice-edible varieties to be found. According to the PA Department of Agriculture, “There are over 200,000 wild mushroom species in this region of the country, of which about 200 are edible and only 25 worth eating and normally sold.” Some poisonous look-alike varieties also exist, so it might be best to forage with someone who definitively knows what to look for. Look for varieties of wild mushrooms that you can determine with certainty are safe. 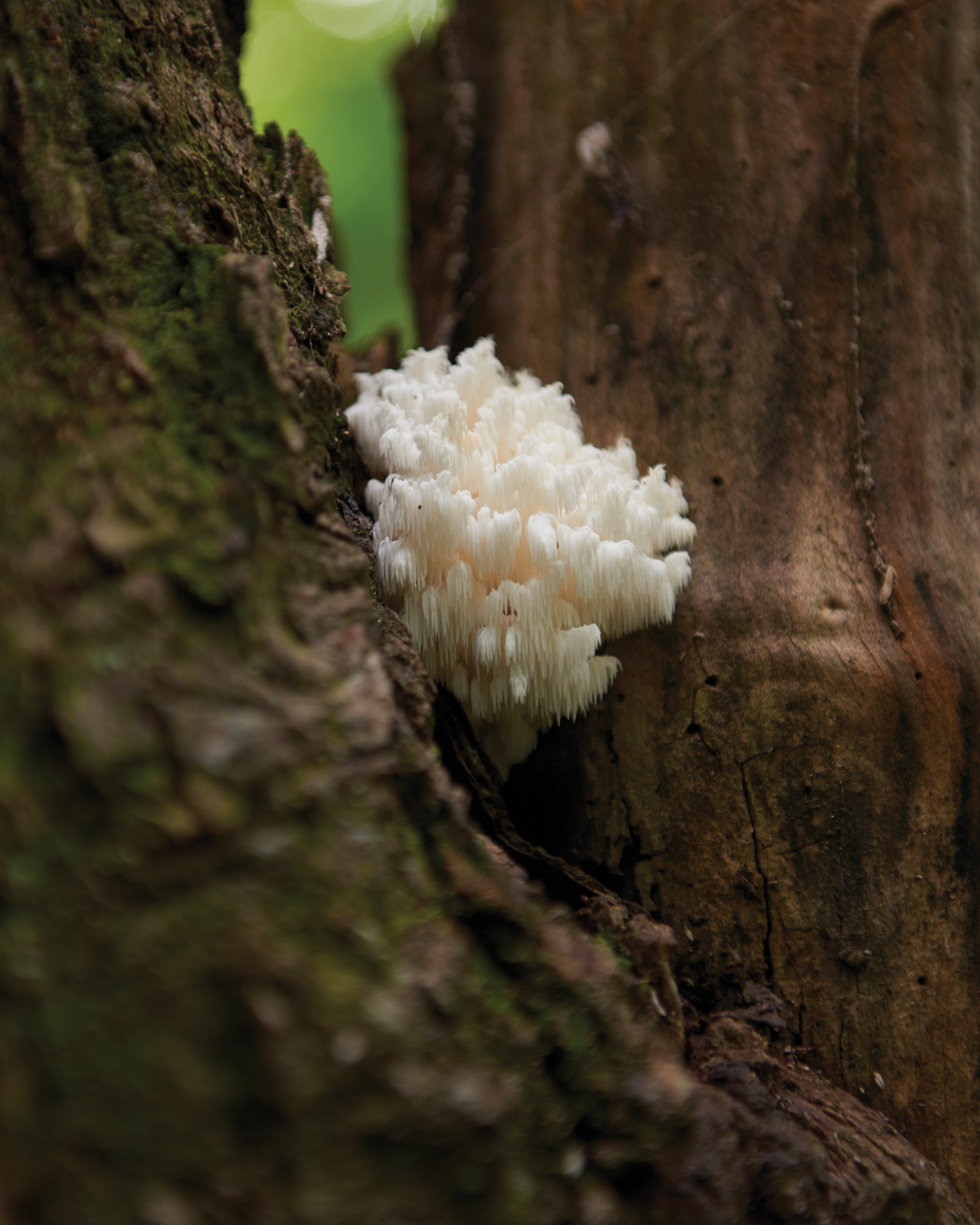 Lion’s Mane, Oyster, Chicken of the Woods, Hen of the Woods and Morels are some choice varieties to look for in our region. Lion’s Mane, which has no known poisonous look-alikes, is a good place to start. Compared to commercially grown mushrooms, Morels are practically unobtanium, being difficult to cultivate and highly prized by foragers and restaurateurs. 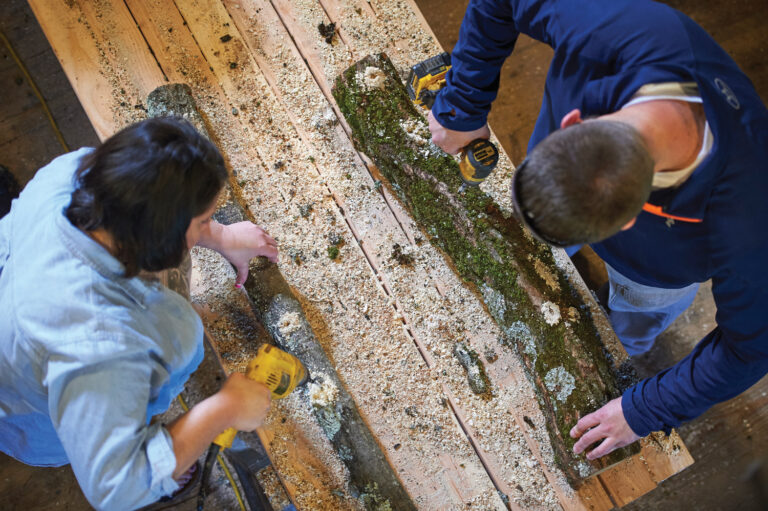 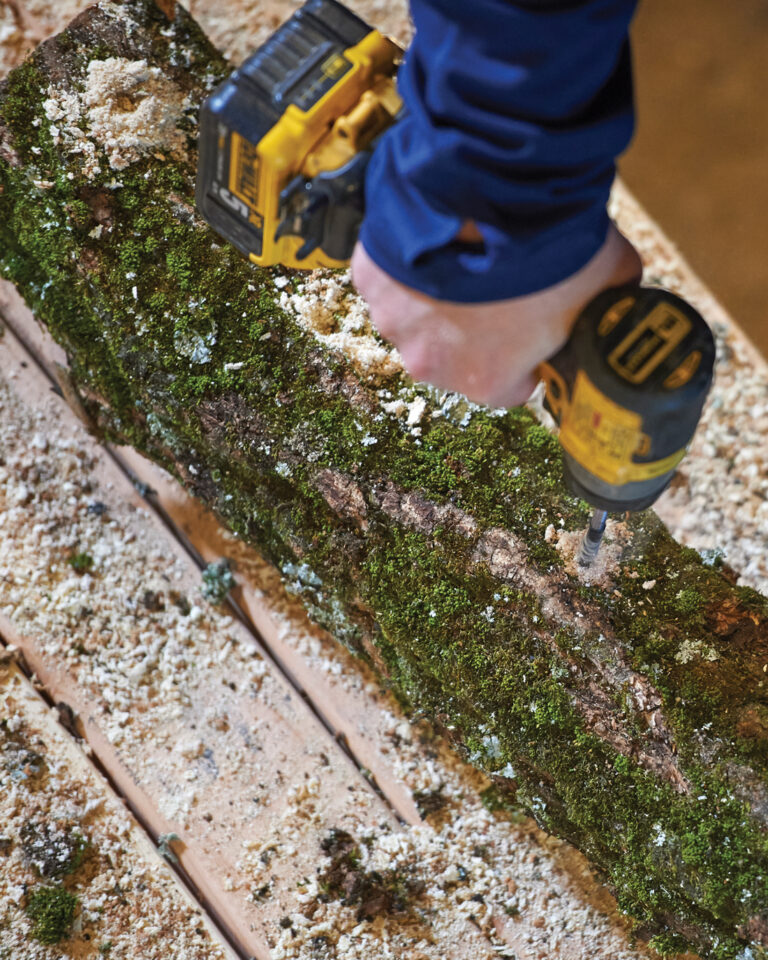 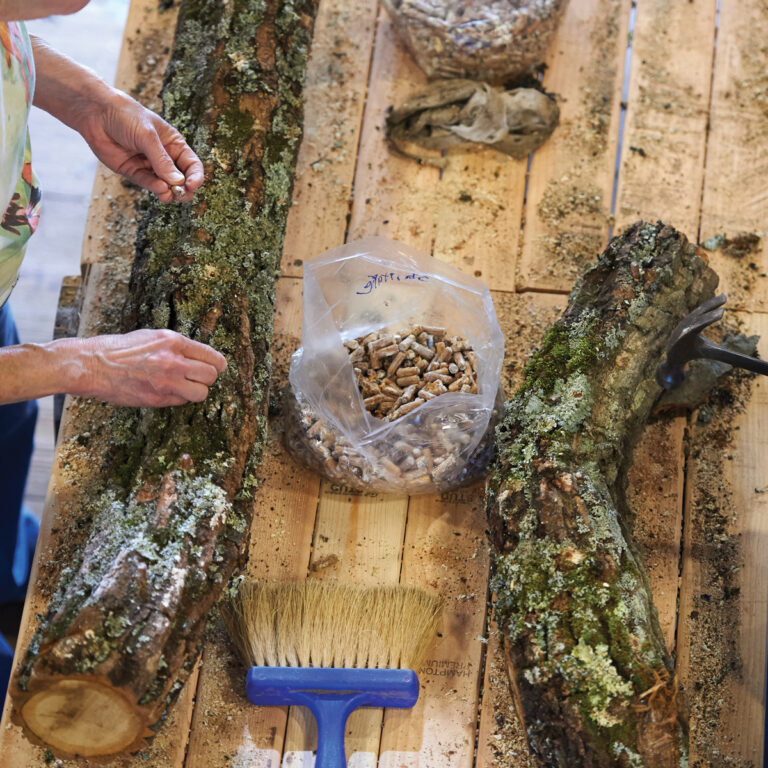 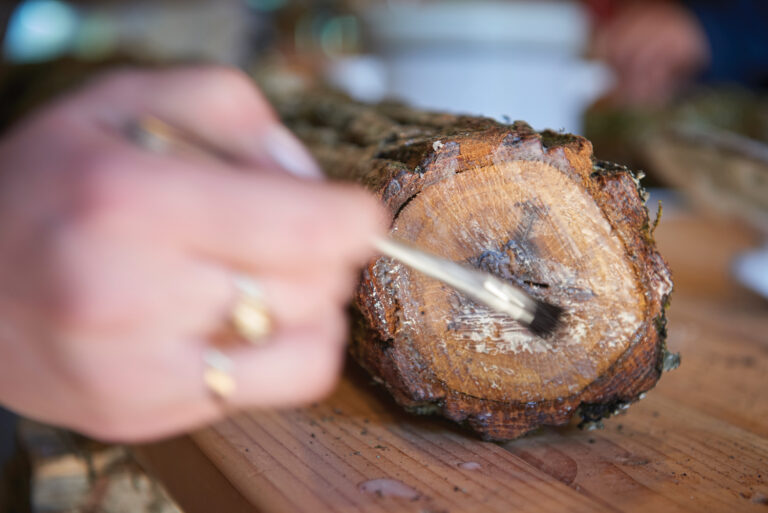 DIY homegrown mushroom kit assembly. Holes are drilled into wooden logs into which wooden plugs inoculated with mushroom spores are hammered. Openings in the log are sealed with melted wax to protect the mycelial network from infestation.

A safe, controlled way to harvest mushrooms in your backyard (or closer) is to purchase a grow kit. Mushrooms can be grown via inoculated wood plugs inserted into a decaying log outside, or by using wood shavings stores in a bag or bucket and kept outside. North Spore Mushrooms in Maine (northspore.com) sells a variety of mushroom grow kits online. Early spring is an ideal time to start, but summer and fall are also suitable.