Does the thought of one more sliced tomato, stuffed pepper, ear of corn or zucchini whatever make you want to stage a revolt? Fall arrives on September 22 and with it, another way to use those treasures from the garden: soups and chowders.

You could say that Jason Hampton is a member of a ground-breaking family. Back in the late 60s, Jason’s parents, Tom and Cindy Hampton, launched a small grape-growing operation in the Southern End. It was the first time in over 100 years that grapes were being grown for wine-making purposes in Lancaster County.

Initially they grew grapes (mainly Concord and French hybrids) for other vineyards (including Nissley and Mount Hope). “Then, my dad said, ‘Hey, let’s make wine,’ so we began making our own wine,” Jason recalls. The first vintages debuted in 1978.

According to Jason, they sold anything and everything to keep Tucquan Vineyards & Winery moving forward, including vegetables, fruit, cider and, of course, wine. “I grew up working non-stop,” says the Penn Manor grad. “If my brother [Brad] and I had nothing to do, my dad would say, ‘Well, then, pick up rocks and sticks.’”

Jason says he learned his work ethic from his parents, both of whom worked full-time jobs (Tom at Armstrong and Cindy at the Pennsylvania Dutch Convention & Visitors Bureau) in addition to overseeing their wine-making operation. “We were once featured in Money magazine,” Jason notes.

When a hail storm destroyed their crop in the late 80s, the Hamptons decided to close. “We just didn’t have the energy to start over,” Cindy recalls. They sold the farm and bought a house on the edge of the city.

As for Jason, wine helped to instill an interest in food, and he ultimately launched his culinary career as a bus boy at Casa Rillo’s, which opened a location in Centerville in the 90s but closed after a year. From there, Jason upped his game and began cooking at various restaurants around the county.

However, music was Jason’s first love and after graduating from high school, he became a music major at Marshall University in West Virginia. Still intrigued by food (and recognizing a career in music was a long shot), he decided to transfer and enroll in culinary school. “I figured cooking could support my music,” he explains. His next stop was the Johnson & Wales campus in Virginia Beach. “I worked at some seafood restaurants, too,” he adds. Despite his hectic schedule, Jason graduated with honors.

His next stop on the career ladder was Lake Tahoe, where he worked at a resort hotel. “I was able to occasionally get to Napa,” he says of California’s legendary wine country.

Then, it was back to Lancaster, where he worked in the kitchens at Haydn Zug’s and The Log Cabin. He also ventured into contract dining and worked at F&M under Chef Bill Scepansky.

That experience paved the way for Jason’s current position as the director of dining services and executive chef at Juniper Village, a retirement community in Mount Joy. There he oversees meals, catering, staffing, purchasing and menu creation. “It keeps me busy,” he admits.

Three years ago, he launched his own business, In a Pinch, offering personal chef and catering services. “It allows me to be even more creative and use ingredients that foodies are curious about,” he says. And, he’s doing his homework in order to stay abreast of trends and products. “I learn a lot through social media and reading,” he explains.

It seems a chef’s work is never done. “Jen and I enjoy cooking at home on Sundays,” he says, referring to his wife. Interestingly, he met Jen through the Office of Domestic Relations. “We both had aunts who worked there and one summer, we were their interns,” he elaborates. Married for 13 years, Jason and Jen are the parents of two daughters, Maia (10) and Madalyn (9). 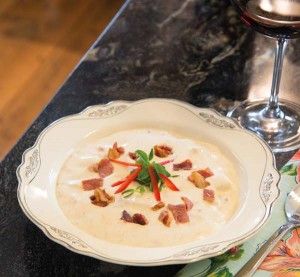 With the arrival of fall, root vegetables start arriving at market. “The early ones provide a nice transition from the raw, seasonal produce we’ve been eating,” Jason notes. He cautions that this chowder is “the real deal” and is not for those who are counting calories. In addition to potatoes, the chowder’s ingredients include roasted pepper, onion, heavy cream, Gouda cheese and rendered bacon. 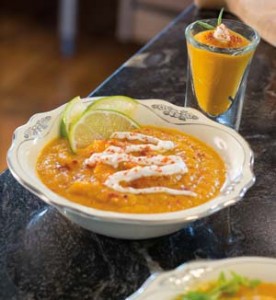 This will be served at the Field of Hope dinner as part of the appetizer course. Jason loves the versatility of this dish. For the dinner, he will serve it as a shooter. Of course, it can be served in a bowl as either a chilled or warm soup. And, it’s perfect for those following a vegan or gluten-free diet. In addition to carrots, ingredients include coconut milk, lime juice, bananas and harissa, a Moroccan pepper/spice blend. “I think it’s the next big spice,” he predicts. 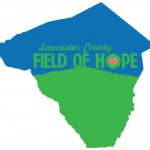 As with most ideas, this dinner with a purpose began as a conversation among friends.

On a trip to New York in March to attend the Architectural Digest Design Show, Carol Heth shared with her traveling companions that she’d like to put a dinner together that would serve a purpose. And, she already knew what that purpose would be: helping Heather Carlock, who had recently received a small bowel transplant, cope with her mounting medical bills. “Heather went to school with my kids,” she says of the personal connection.

She is also aware of the challenges Hayden Rettew is facing due to his Dravet Syndrome diagnosis, as she often works on design projects with his grandmother, Sally Ream, at Phillips Paint & Decorating Center. Jason Hampton, who will serve as the chef for the dinner, became aware of Dawson Waite’s battle with x-linked myotubular myopathy through working with Dawson’s mother. Hayden and Dawson will benefit as well.

The open-air dinner on the Heths’ farm in West Hempfield Township will be held September 17 (4-8 p.m.). Many of the ingredients for the farm-to-table dinner will be supplied by the farmers/vendors that comprise the Community of Oasis at Bird-in-Hand. Bird-in-Hand Bake Shop will provide fresh made Amish Bread and sticky buns. Cupcakes will be provided by CupCakinLori. Wine will be supplied by the Philip Carter Winery in Hume, Virginia. (The connection? Carter was an impromptu guest at one of the Heths’ Thanksgiving dinners, and a friendship was forged.) Josh Wolpert (the cousin of James Wolpert, who appeared on The Voice) will provide live entertainment.

Appetizers Under the Tent

Dinner in the Field

Dessert Under the Tent 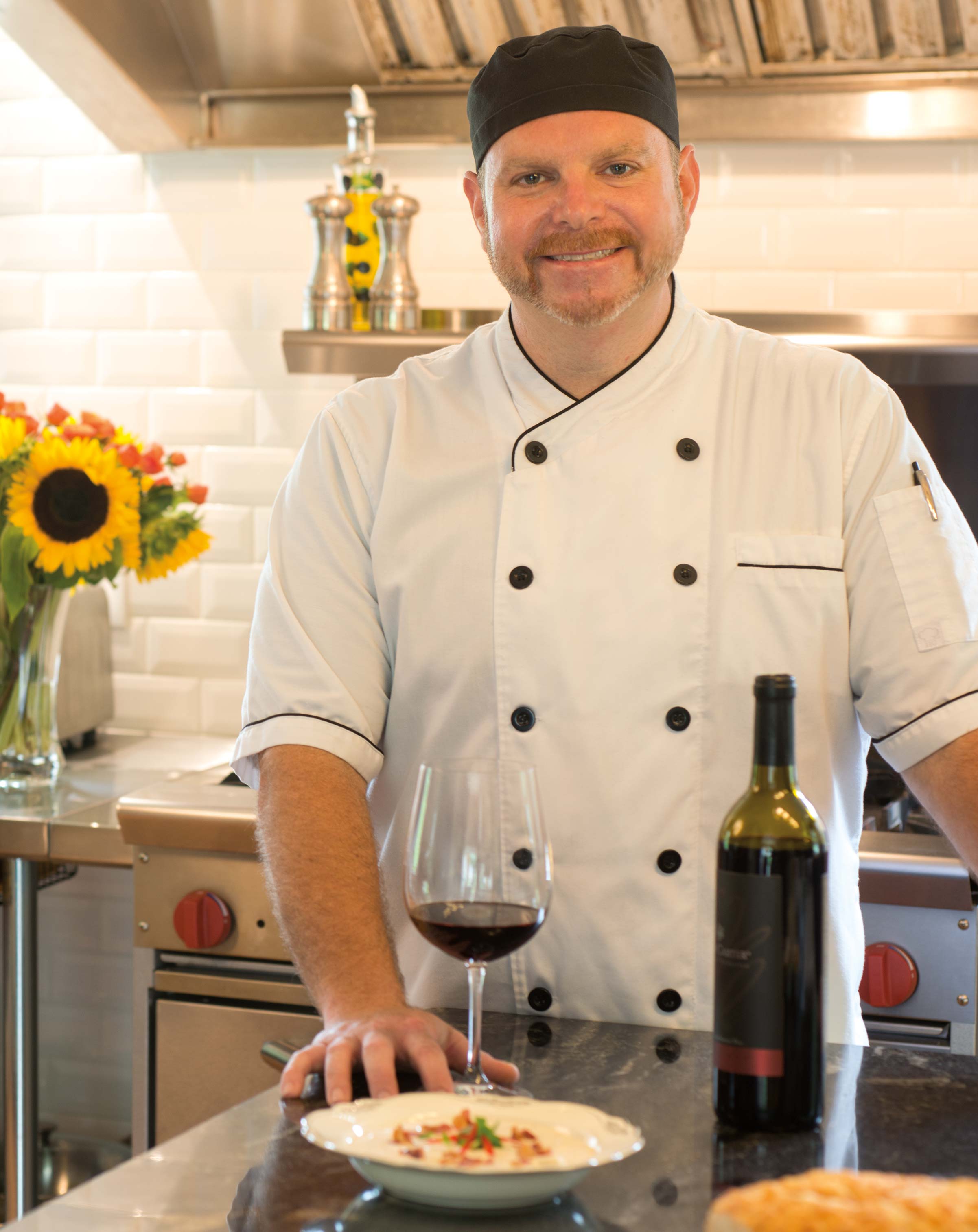 Chef Jason Hampton won the appetizer (2015) and the entrée (2016) categories in the A Taste of Western Lancaster County event, which is held in February at the Elizabethtown Public Library.