Whatever notions you may have of Columbia, toss them away right now. Get in your car and pay a visit to the town. Put your feet on the ground and walk around. Talk to the residents and shopkeepers. Keep your eyes peeled for little quirks and details. Follow your taste buds wherever they may lead. Keep your mind open – and most importantly, be ready for the unexpected. 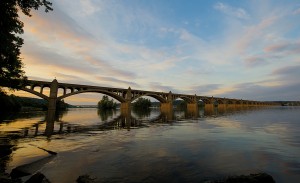 People of columbia don’t just preserve their history – they live it, breathe it and welcome it like an old friend.

There are museums and heritage sites, of course. The Wright’s Ferry Mansion illuminates the story of the family whose river business and philanthropic works launched Columbia into history. Columbia Historic Preservation Society is a treasure trove of early Columbia, Underground Railroad and Civil War information. The Turkey Hill Experience chronicles Columbia’s role in producing one of the top ice-cream brands in the country. The National Watch & Clock Museum is mentioned as part of the reason Smithsonian magazine declared Columbia one of “America’s Best Small Towns” for 2014.

But then, there’s the everyday history that can be found in the town’s antiques shops – many of which are appropriately housed in repurposed old buildings.

Take the former State Theatre, for example. Opened in 1928 as one of the largest movie theaters outside of big cities, it boasted 40 ft. ceilings and a seating capacity of close to a thousand. It closed in 1978 and was sporadically occupied for the next 30 years. Two years ago, Mike Boyer turned the movie house into the Old State Theatre Antique Mall, which now does a brisk business in entertainment-related memorabilia such as sports, carnivals and arcade games.

Burning Bridge Antiques Market features three floors of astounding architectural finds including stained and leaded windows, mantels, wood trim, doors and fixtures, plus commercial artifacts such as post-office boxes, cash registers and old pharmaceutical bottles. It’s also the site of an infamous 1917 fire that destroyed the fourth floor and killed a fireman, whose ghost reportedly can be heard walking up and down the stairs. 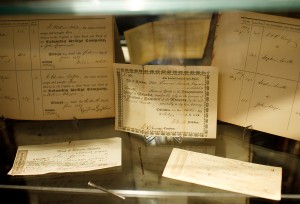 Columbia doesn’t just have ghosts. It has so many ghosts and stories of the unexplained that there’s even a museum dedicated to it.

Rick Fisher owns the National Museum of Mysteries, which features information on spirits, astrology, aliens and local lore including the Albatwitch: a sasquatch-like creature that supposedly lives around Chickies Rock and is fond of stealing apples. (Rick even helped organize the first-ever Albatwitch-related festival last month.) He also leads Ghost Tours of Columbia each weekend along with Chris Vera, director of the Columbia Historic Preservation Society.

Rick and Chris attribute the active apparitions to the restlessness of the river. So many people have made their way into Columbia over the past 300 years – militia men, escaped slaves, bounty hunters, bootleggers, gangsters, and workers for the railroad, canals, mills and iron forges – all flowing in and out with the Susquehanna’s waters.

The Columbia Market House, with its abandoned jail, probably is the town’s most haunted place. The market itself is said to be frequented by a little blonde girl named Katie Durberow, whose family owned a chocolate company across the street. Katie is a benign spirit: People at market have reported feeling a child’s hand holding theirs and the sound of jacks being played. Below ground, however, lies the “dungeon” – and its ghosts are not kind. The spirit of a hulking man dubbed “Big John” often is reported, as are screams and cries of “get out.” The tension in the air is so thick that Chris refuses to enter unless it’s absolutely necessary. 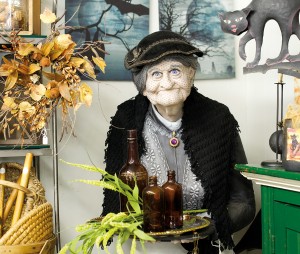 Whimsical Halloween décor is on display at Ladybug Keepers on Locust Street.

The people of columbia certainly don’t shy away from their town’s ghostly reputation, especially this time of year.

Displayed among the vast warehouse of vintage furniture and collectibles at Tollbooth Marketplace are rows of Halloween décor in almost every style imaginable: country, Victorian, cute, gory. There are little pumpkins and adorable witches and skull candelabras, but also horror-film masks and disembodied hands. Some Halloween images pop up in unexpected places, like a copy of a magazine called Everybody’s Poultry from 1934 with a jack-o-lantern on the cover.

Ladybug Keepers has delightful Halloween items in keeping with the shop’s usual selection of primitives and Early American décor. And, Hinkle’s Pharmacy is famous for its oversized display of Halloween items, which this year includes stuffed vultures and crows, spiders’ webs, skeletons, bats and witches galore.

Historically chilling items can be found at Rivertowne Antique Center: a Victorian-era surgery manual (complete with helpful illustrations of amputations), an encyclopedia set on psychic healing, an elegant branding iron and buttons from 1980 with Edvard Munch’s The Scream superimposed over Three Mile Island, to name a few. Rivertowne – housed in an old tobacco warehouse – also contains a lot of not-so-creepy history: the Art Deco luncheonette from the old Sun Restaurant in Lancaster is on display, as is an etching on the wall (circa 1896) supporting William McKinley for President.

In addition to its rich history, Columbia also is experiencing a current explosion of arts, culture and cuisine. You can especially feel it the fourth Friday of each month, when the town’s galleries, studios, shops and restaurants welcome visitors in the evening. (Fourth Friday activities also take place in Marietta and Wrightsville.)

At Susquehanna Center for the Creative Arts (SCCA), you can see everything from paintings to found art to installations with moving pictures, plus works by locally heralded artists including Carol Galligan, Claire Giblin and Milt Friedly (who also heads the center). The SCCA also has a glass-blowing facility operated by Milt’s son, Jeremy, who offers lessons by appointment.

Two blocks away, housed in a gorgeous Victorian home across from the historic Mount Bethel Cemetery, is Jonal Gallery/Alverta Arts Shop, owned by Dale Weibley and John Novak. On display are Dale’s intricate pen-and-ink stipple illustrations, as well as monthly exhibitions by regional artists. The Labyrinth Room, with a walkable pattern embedded in the wood floor, is a particular highlight.

Artists and guests often make their way to Garth Gallery at the end of the night. Owner Cle Berntheizel, a native son of Columbia and chair of Columbia Downtown Development Corporation, displays his own works, as well as rotating exhibitions by local artists in a gallery that’s just steps away from the Wright’s Ferry Mansion. On the second floor is Café Garth, a huge space with additional displays and room for special events, plus a coffee bar where Cle himself whips up the drinks. 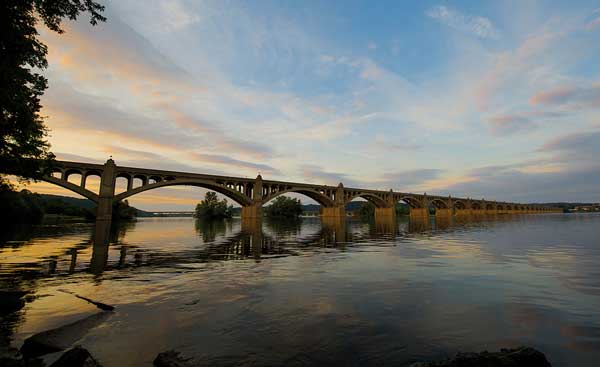