Rollin’ Into the Future of Bicycles
Search
October 4-7
The Midway, as well as games, food stands and vendors, can be found along West Main Street and North and South Roberts Avenue.
The Farm Show Building is located at 101 West Franklin Street.
The Midway is open from 11 a.m. to 10 p.m. daily.
Admission is free; parking is available in community and church lots for a fee.
Details: Newhollandfair.org

In 1927 five people, who were impressed by the success of fairs in communities such as Ephrata, Lititz and Manheim, proposed the idea of launching a Farmers Day Association in New Holland. The venture moved forward, and New Holland’s inaugural two-day fair was held October 21-22, 1927. Virtually every business in the downtown area donated window space for the purpose of displaying exhibits. The high school was pressed into service as well. Streets were closed so that vehicles, farm equipment and household appliances could be properly displayed. Food stands also filled the streets, and the City Band of Lancaster performed. Attendance was estimated to be as high as 18,000.

It seemed that New Holland had a hit on its hands, and the organizers were thrilled by the event’s success and the fact that they had $217.29 leftover after paying expenses. The decision was made to plan a fair for the following year, which just happened to mark New Holland’s 200th anniversary. Expanded to three days (October 18-20), organizers were able to close additional streets and add more exhibits. Attendance doubled!

In 1933 the New Holland Farmers Day Association was incorporated. A year later, a Mummers-style parade made its debut, offering $40 in prize money. The Baby Parade also stepped off for the first time, as did an Industrial Parade and a horse show. By 1935 women were permitted to participate in the corn-husking contest.

Fairs were not held during the war years (1941-45). Following the fair’s return, it grew to include a fourth day; music and rides were added in 1949. In 1952 the parade, which is always held Wednesday night, was officially named the Spectacle of Bands.

Over the course of the next several decades, the fair reflected the times in which we live. For example, an adult hula-hoop contest was waged in 1958. In 1960 political rallies were held for presidential candidates John F. Kennedy and Richard M. Nixon on two separate nights. In 1969 a Handcraft Show debuted, reflecting the country’s love of crafting. A Tug-of-War contest for women was waged for the first time in 1970. Due to a lack of participants, it lasted only two years and was replaced by the Ladies Bucket Brigade.

The Fireman’s Tug-of-War contest is one of the signature events of the fair. Its purse has grown to $600 for the winning team, $500 for the runner-up and $400 for the third-place finisher. Fourth place earns $300, while the other teams are awarded $50 consolation prizes. Seven banks and three other businesses sponsor the event, which is held rain or shine on Thursday and Saturday nights. Last year, the team from Intercourse took top honors.

Another contest has also gained notoriety. In 2005 the Long John Eating contest – sponsored by Achenbach’s Pastries – kicked off. The concept is simple: Kids are given three Long Johns, while teens get six and adults nine (plus, each receives a bottle of spring water), and whoever devours them first wins their division. The rules state that they must be eaten in their entirety and upchucking immediately disqualifies you. Last year’s adult winner, Justin Lana of Lititz (who claimed the adult purse of $40 for his effort), consumed nine Long Johns in 4 minutes and 3.36 seconds.

Then there is the winner of the apple pie baking contest: He or she earns $500 for his or her efforts.

Of course, the fair’s main focus is on agriculture. Numerous livestock shows are held in the tented area on Franklin Street throughout Fair Week. In 2009 the association purchased the Meke Building in New Holland, making it possible to display nearly all the exhibits under one roof.

There are also special events such as the pet parade, a tractor-driving contest and horseshoe pitching. The younger generation can participate in Kid’s Day and a pedal power contest (both are held Friday). Community groups and civic organizations also sponsor an array of food stands. 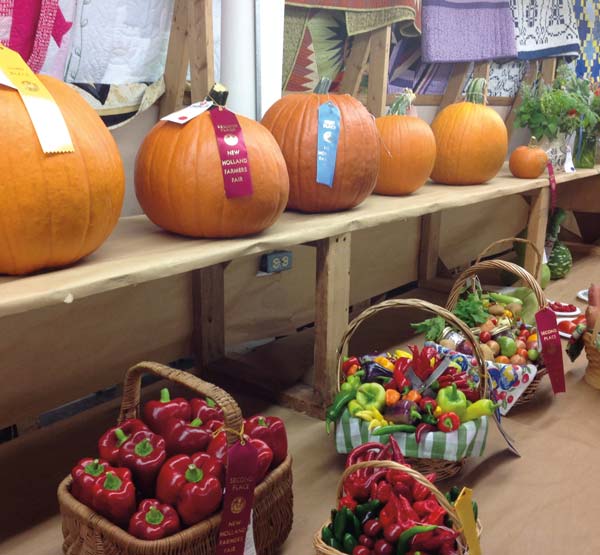