Now that your beds have sprung to life, it’s time to fill in the bare spots. I’m providing a list of no-fuss annuals that provide pops of color, attract pollinators and even re-seed. 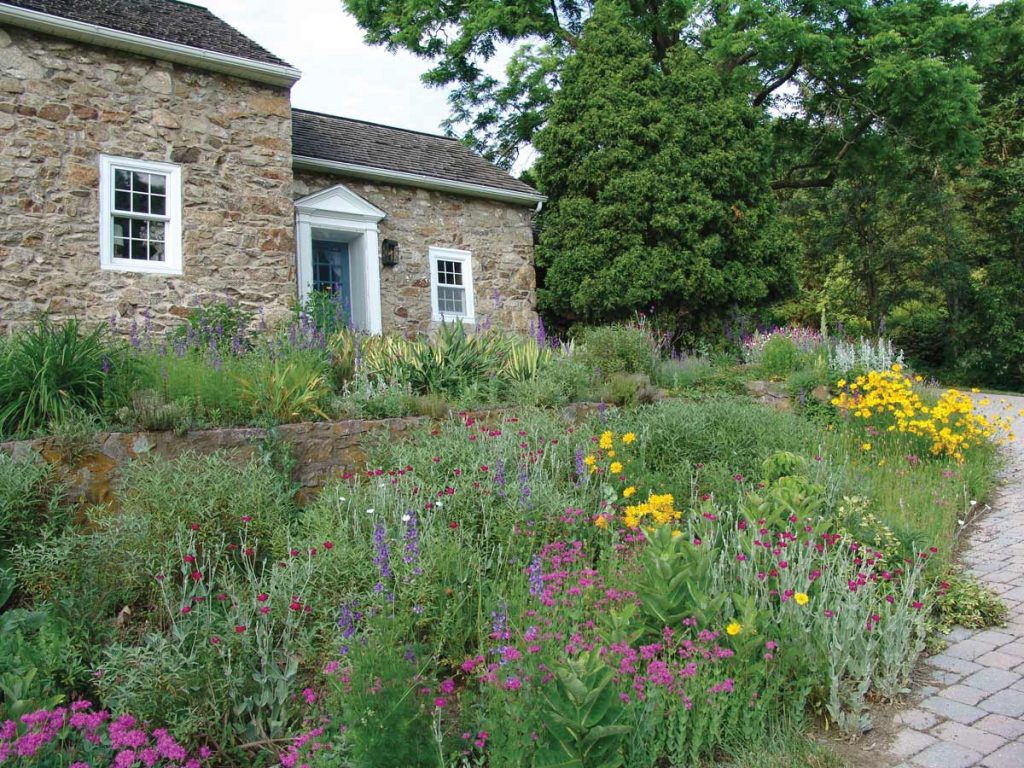 Two months ago, I recommended some plants for avid gardeners who were in search of something unusual that “no one else had.” On the flip side, there are casual gardeners who are searching for something foolproof, undemanding and will add color and cheer around their property during the summertime. For them, carefully selected annuals will fit their needs.

What follows are some suggested annuals that will not only provide color, but will also attract beneficial insect pollinators, hummingbirds and butterflies. They are all likely to be available in “six-packs” at the garden center, ready to pop in the ground. And, many will self-seed and return each year. Well, unless you insist on mulching.

All of these suggestions will do best in full or most-day sun and will tolerate average to poor soil. They are also chosen because deer, groundhogs and rabbits will not bother them. 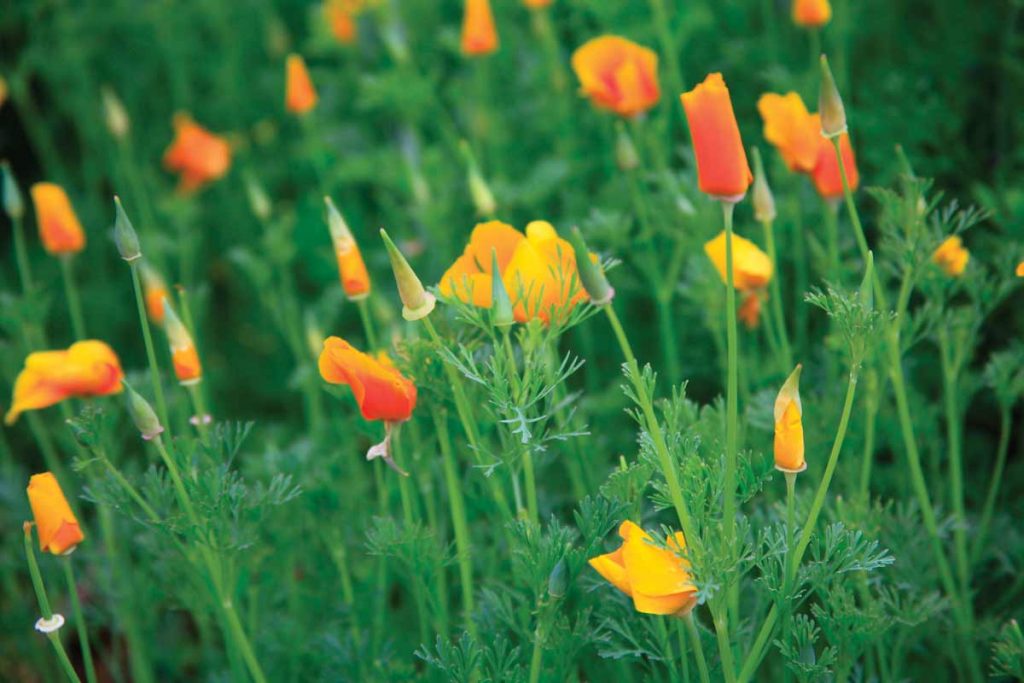 This cheerful native is the state flower of California and grows on hillsides, along roadsides and in open areas from southern Washington south to northern Mexico. The poppy is a perfect choice for hot, dry areas and will grow almost anywhere without a fuss. Plant it to cover a neglected or hard-to-cultivate area. It is considered a short-lived perennial because it sometimes returns but more likely will self-seed (if not mulched!).

The mounded, fern-like, blue-green foliage is covered with single, cup-shaped and delicate bright-orange flowers that bloom from late spring through summer. (There are cultivars available in other colors including pink, red and lilac.) The flowers will close on cloudy days and at night. Deadhead the flowers regularly for additional bloom, but be sure to leave some flowers later to produce seed. If you can’t find it at the garden center, it is easy to grow from seed, preferably sown directly in the garden at the last spring frost date (mid-May). Or, spread the seed this fall for next year.

Poppies are very easy to grow in sandy or even poor soil, provided there is good drainage; therefore, they are ideal for rock or gravel gardens. There are no insect or disease problems. 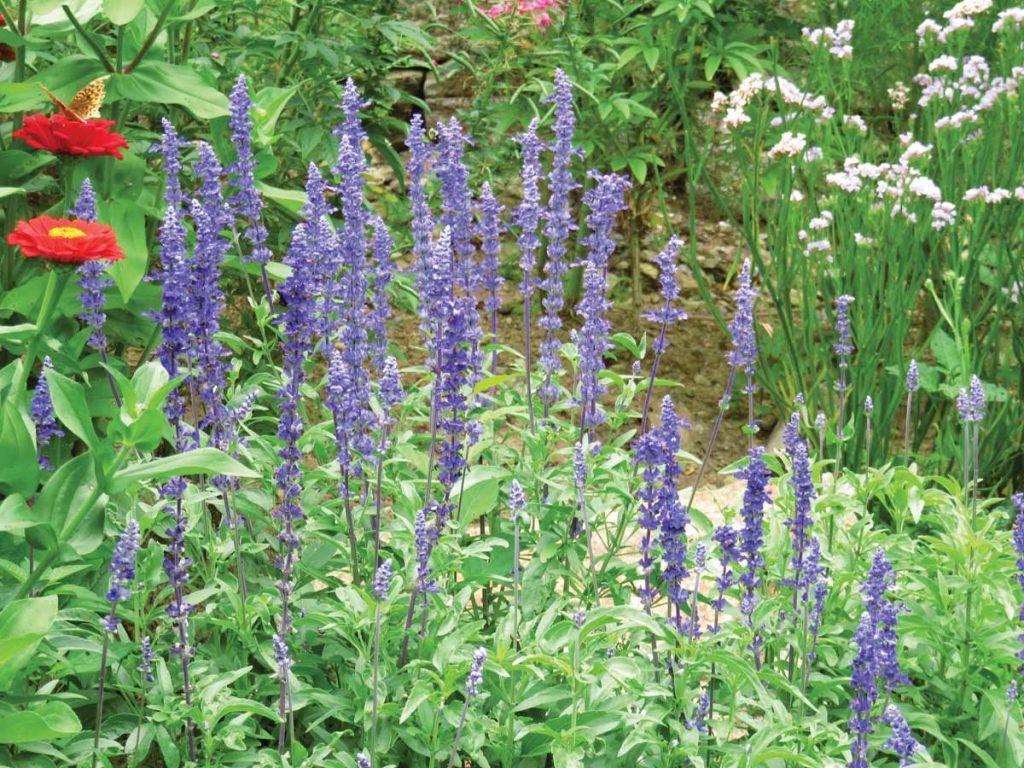 I’d call this the one annual that is worthy of being in everyone’s garden. It displays showy 2-foot spikes of deep-blue flowers above gray-green foliage from early summer to frost. It is a vertical plant that goes with anything but will look especially dramatic with orange flowers (like the California poppy). It will mix with pastel colors just as well.

It is best to use purchased starts rather than starting from seed. Cut back spent flowers for continuous bloom. It attracts butterflies, bees and hummingbirds. There are no serious insect or disease problems. It’s a good choice for clay soil and will tolerate dry spells, but it can get powdery mildew if constantly wet. 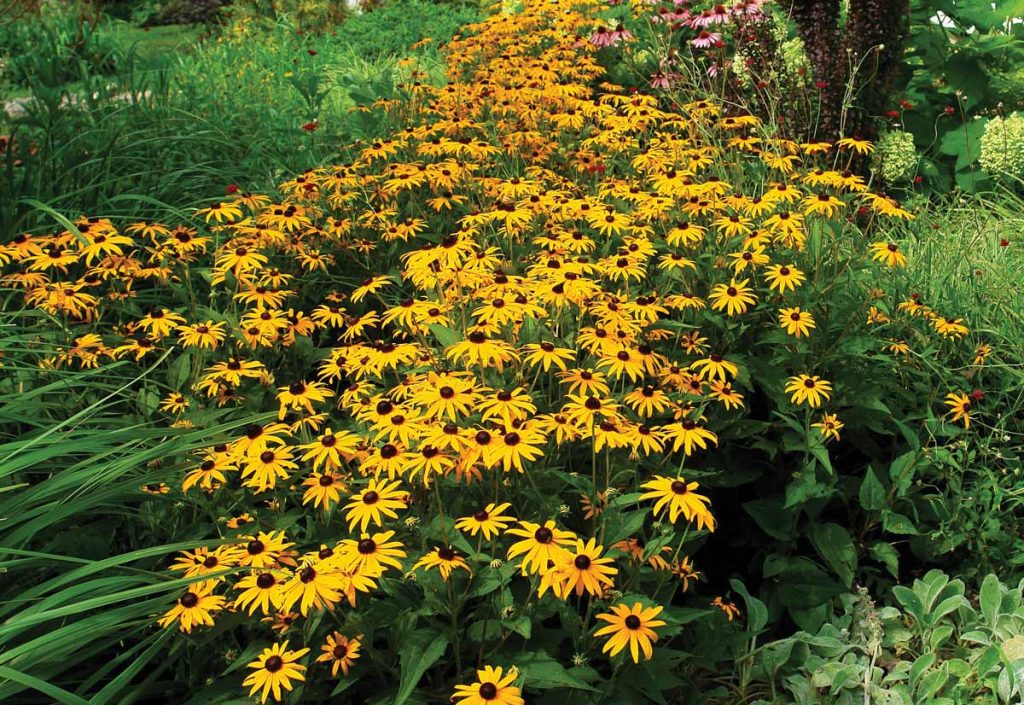 Here is another easy annual that will naturalize. Its showy yellow to orange-yellow flowers with dark-brown centers will bloom from June to September. The flowers appear on stiff, upright, 2-feet-tall stems. The leaves are rather coarse (hirta means hairy). It will survive dry spells and even grow in clay soil. It will bloom the first year from seed planted earlier, but by now, it is best to get market packs. It’s mostly pest-free although watch for slugs. It’s also ideal for mass plantings and makes a good cut flower. It’s native to the central U.S., where it grows in fields and roadsides. It attracts butterflies. 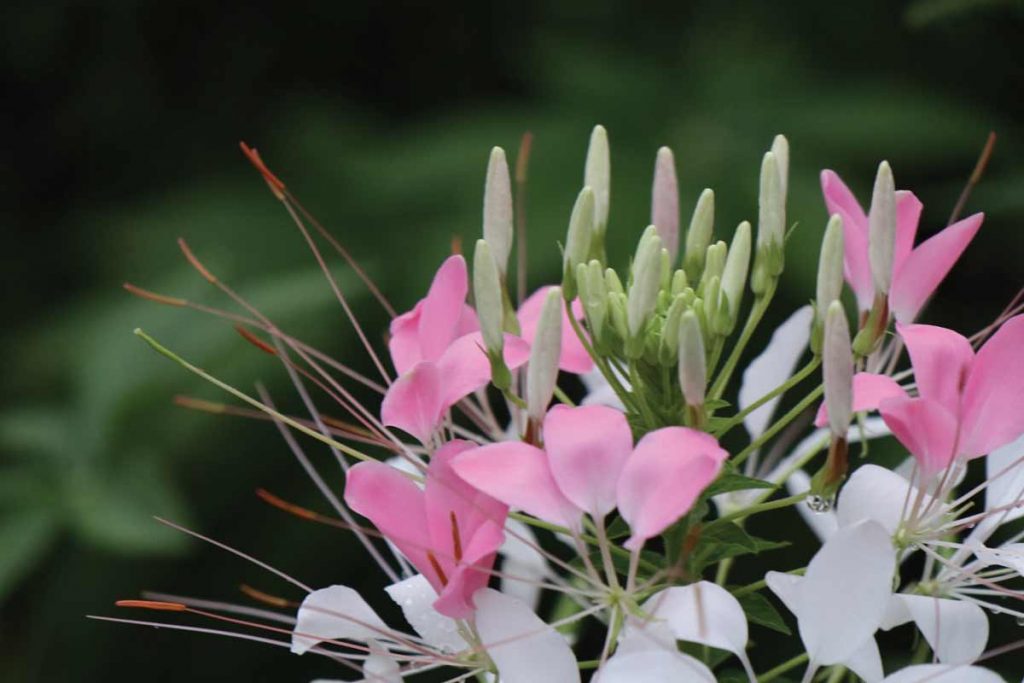 Cleome has been a garden favorite since the 1800s. It is dramatic, fast-growing and at 4-feet high is suitable for the back of the border or in the middle of an island bed. It blooms without pause beginning in late June and continuing until frost. The large, globe-shaped clusters of flowers have long, protruding, thread-like stamens, thus the common name. The flowers are usually shades of pink, but cultivars are available in violet or white. Cutting off the older flowers every other week will insure fresh blooms. Later, elongated seedpods will develop below the flowers. 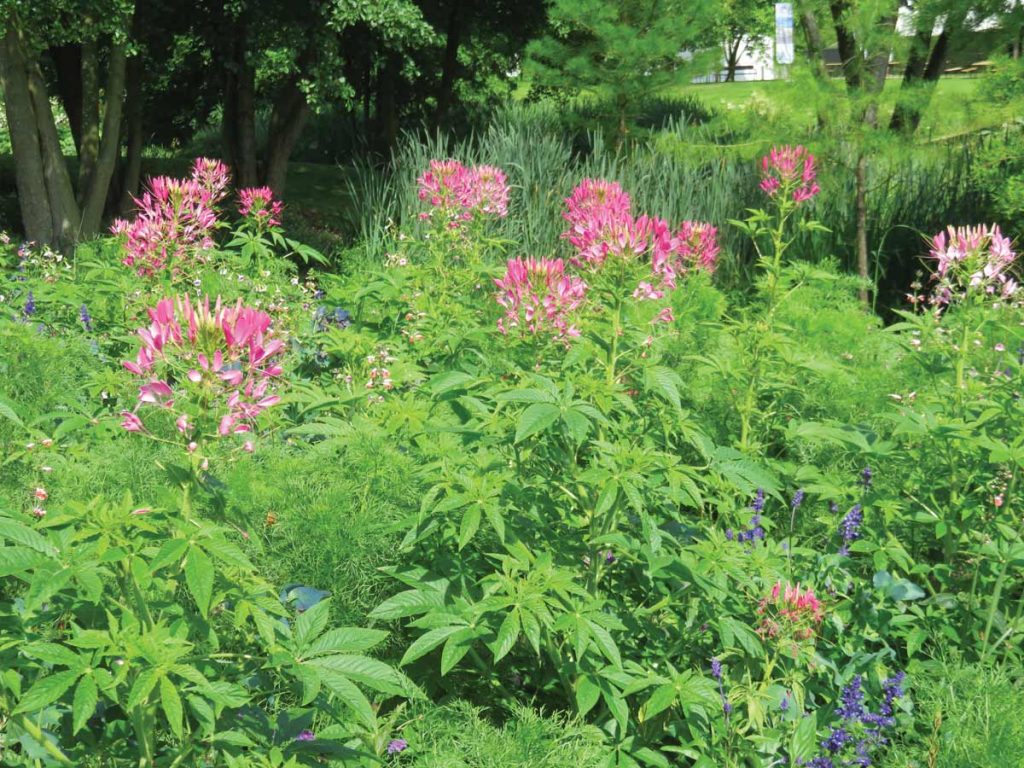 Spider flower grows best in full sun and in moist, well-drained soil. Although it tolerates dry conditions, watering will promote better growth and flowering, but overwatering and over fertilizing causes leggy growth.

In its native tropical habitat in South America, the pollinators of the flowers are primarily bats. Here, it will attract hummingbirds and butterflies; birds will eat the seeds later in the season. It freely self-seeds. The foliage is a bit sticky, perhaps the reason why critters won’t touch it. 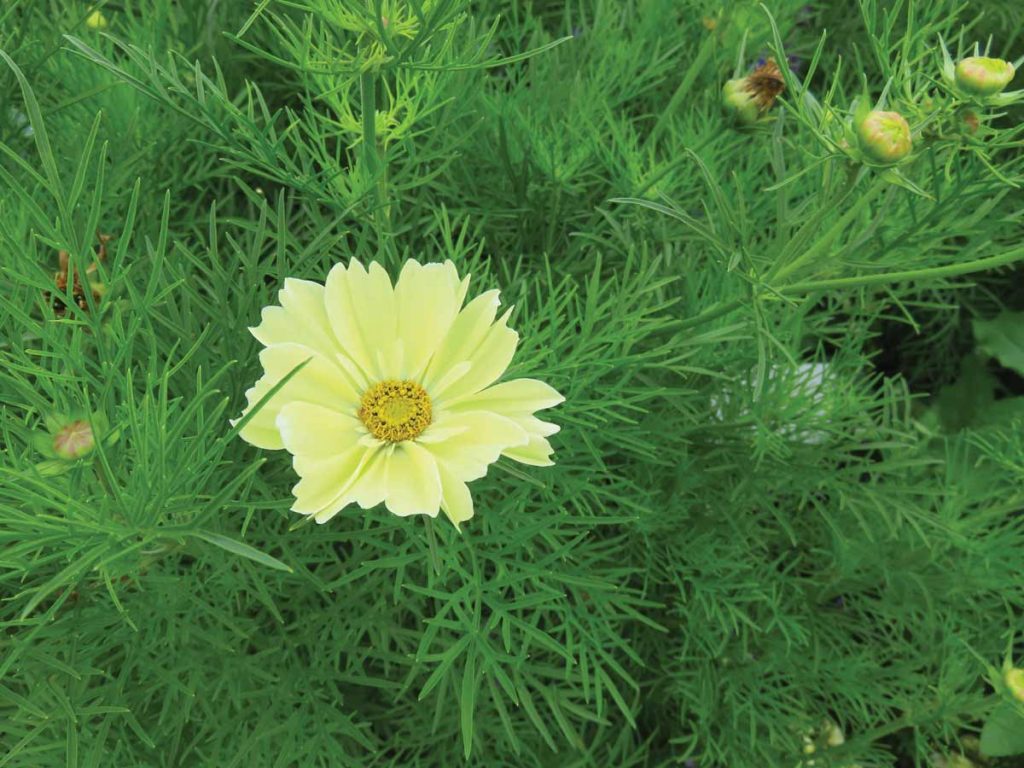 Another good choice for the back of the border, this native to Mexico and the southern U.S. reaches 4-feet tall with ferny medium-green foliage and will produce non-stop flowers from late spring to frost. The flowers are red, pink or white with a yellow center. There are also cultivars with double flowers and some dwarf varieties.

Cosmos does best in average soil; actually, rich fertile soil is best avoided. Space plants close together for mutual support and protect them from strong winds. Again, deadheading the spent flowers ensures constant fresh bloom, but allow some flowers to go to seed later in season for self-seeding. It attracts butterflies. The Greek word kosmos means beautiful, and that they are. 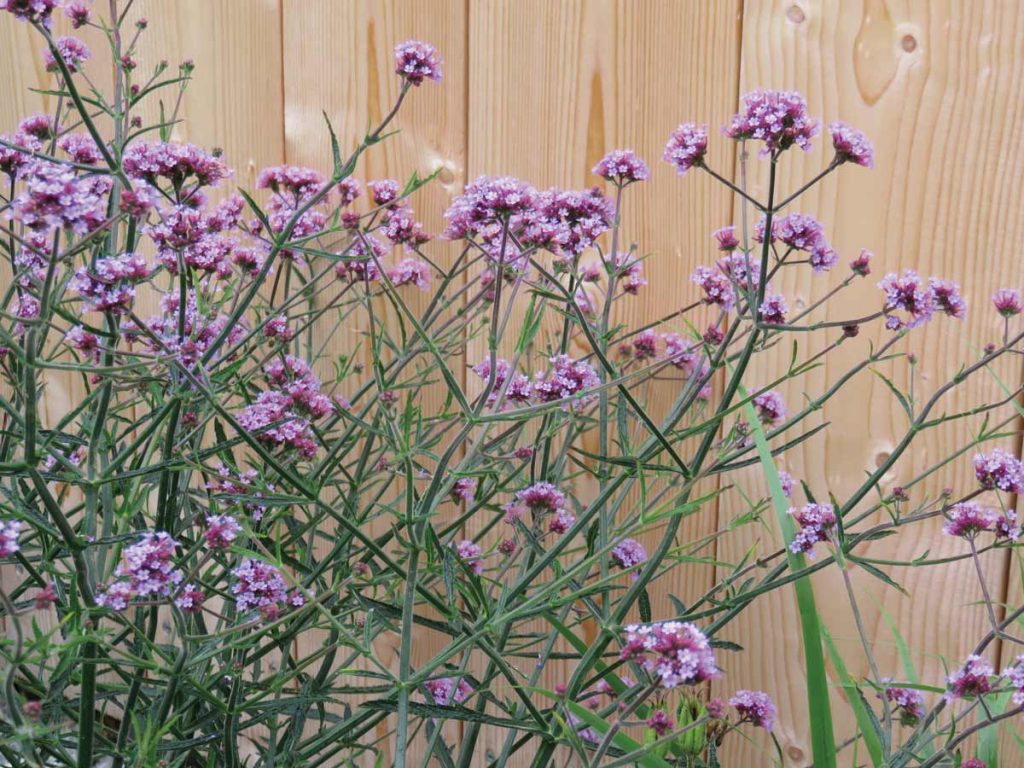 From a basal clump of leaves arises a stiff, erect leafless stem that grows to 4-feet tall and bears clusters of tiny rose-violet flowers from mid-summer to fall. It does not need staking. This see-through plant is a butterfly magnet. Native to Argentina and Brazil, the Latin species name refers to Buenos Aires. It self-seeds moderately and should be OK for this area, although in warmer areas of the southern U.S., it has reportedly become a roadside nuisance. It occasionally gets powdery mildew. 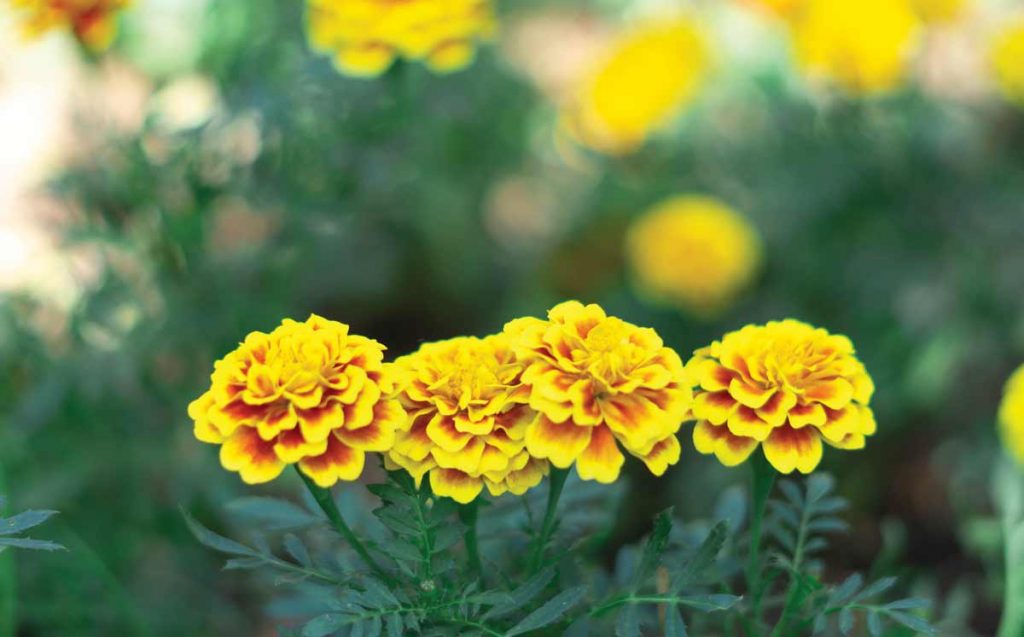 Marigolds have been an easy-to-grow garden favorite for generations. Although commonly called the French marigold, it is a native of Mexico. The showy yellow, orange, red and bicolor flowers attract butterflies. Deadhead spent flowers promptly for continuous fresh flowers. This is a lower-growing selection on my list for the front of the border. Pests avoid the aromatic foliage. 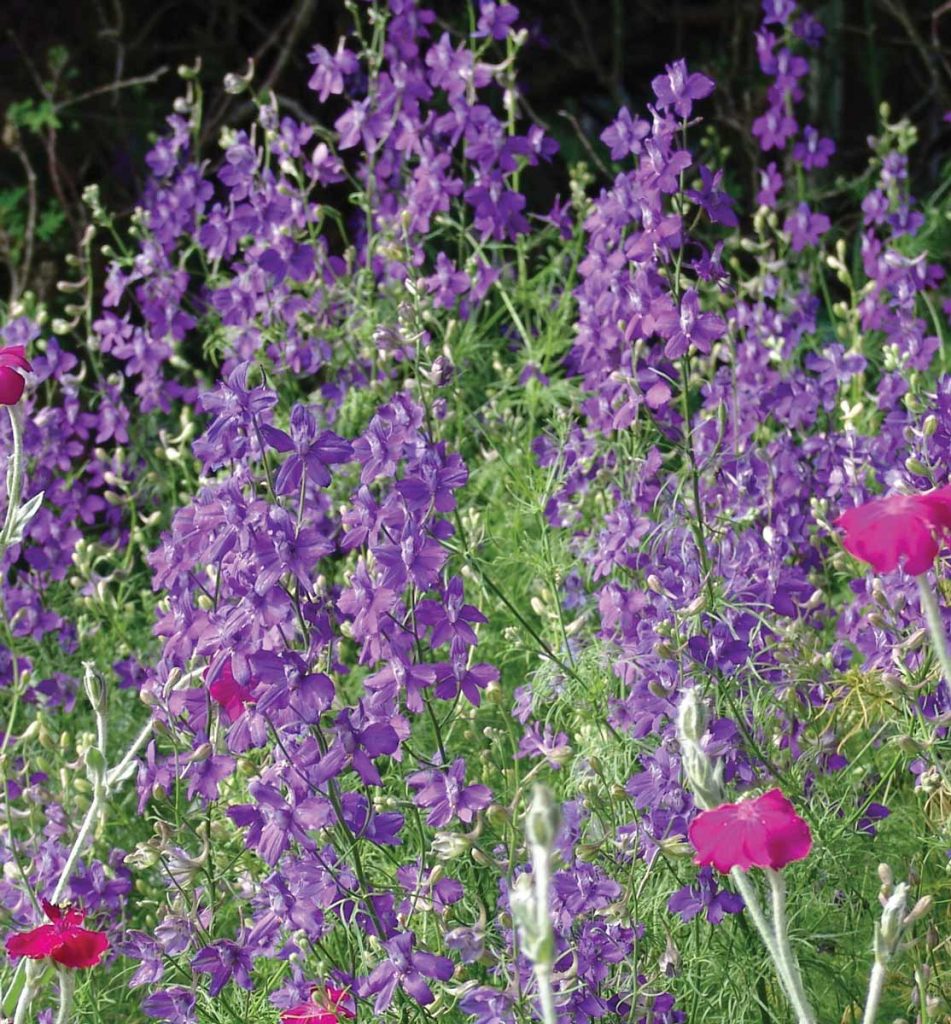 This self-seeding annual is a cool-weather bloomer that becomes dormant by June. But, if you can get some seeds from another gardener, scatter them now for a display in May of next year. The 2-foot, spiky, delphinium-like flowers that bloom above ferny foliage are usually blue-violet but are also available in mixtures of blue, pink and white. It is considered an excellent cut flower. 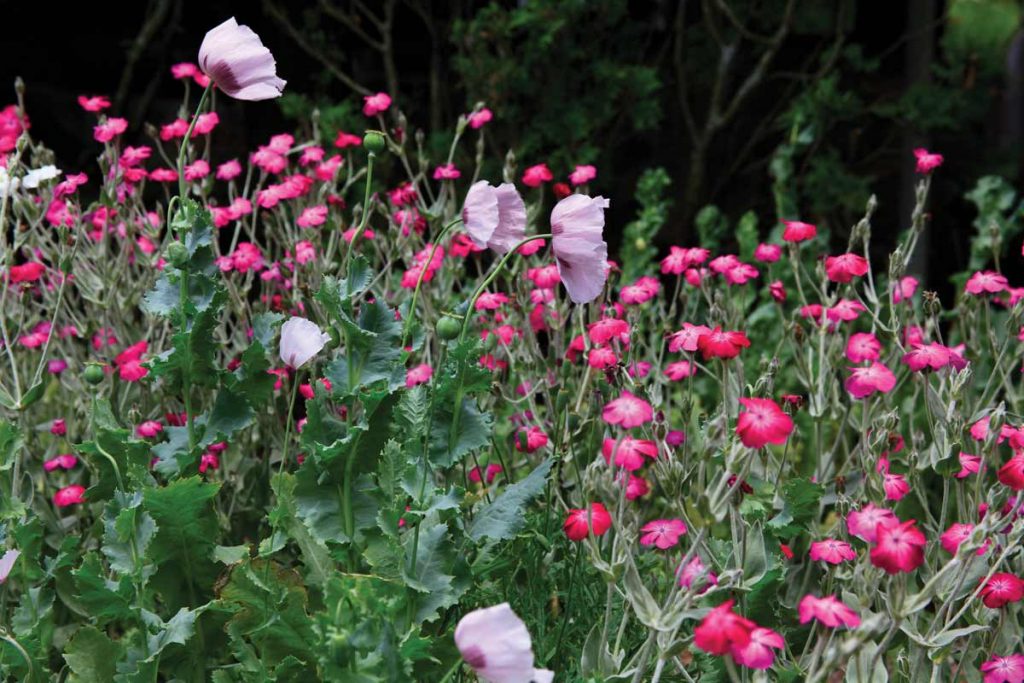 For some punch, Rose campion or Catchfly is just the thing. Grow this annual for both its intense magenta flower color and the fuzzy foliage. The flowers perch on 2-to-3-foot stems from May to July. After that, cut the flowers back, and the silver foliage will serve as a ground cover similar to Lamb’s Ears. It’s a good choice for poor, dry or rocky soils. It will freely self-seed, but dead-heading after bloom can prevent this.

If you are puzzled that I don’t have zinnias on my list, it’s certainly not because I don’t appreciate the wonderful flowers that are available in so many colors and variations. Additionally, zinnias are without equal as cut flowers. It’s just that in my garden, if they haven’t already been chewed by roving critters, by August they often become disfigured with powdery mildew.

Grab whichever of these easy annuals you can and plant in any combination – but, please, in drifts, never in rows. By doing so, you will create a splendid “cottage-style” garden with minimal fuss. And, if you lay off the mulch, many of them will self-seed and return next year.

One more thing: Snip off the first few flowers that form. This will ensure that your new plants will branch out and become more robust. 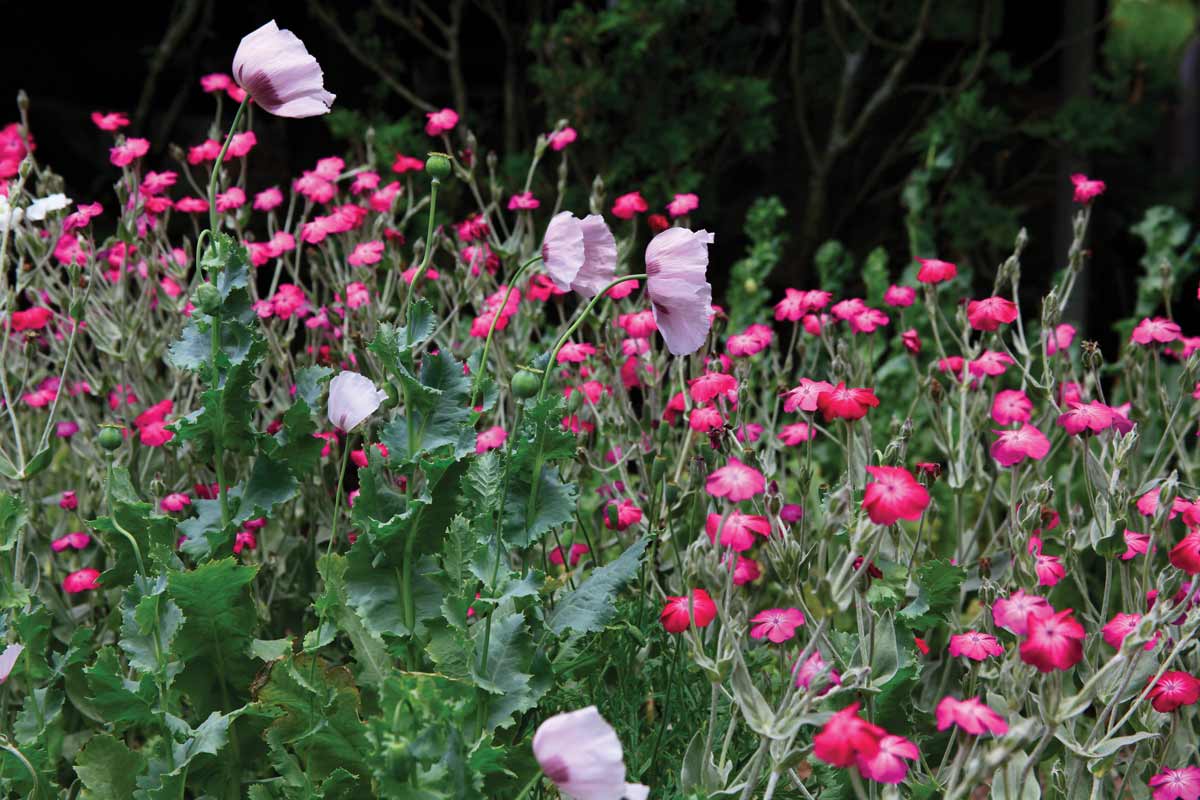