In the North & West, one of the newer players (opened November 2014) has a deep connection to the conservation of the county’s history and community. When I first walked into the business called Moo-Duck Brewery, I had no idea what to expect.

Situated in what seemed to be an auto mechanics garage, I learned owners Kristen and Mike Brubaker (not the former state Senator) have a passion for both brewing and giving back to the community. Each month or two a beer is designated as a charity beer. For every charity beer sold, 50 cents is given to a charitable organization. It’s a win-win-win.

The name Moo-Duck comes from Mike’s bird-watching team. He needed a name for competing in the World Series of Birding while working at the Pocono Environmental Education Center. He says the name is fun, and brewing should be, too. As a brewer, he likes to experiment with more traditional recipes. The brewery’s flagship brews are Hoppy Toad IPA, which has a heavy hop aroma backed by a solid malt background; Purple Carp Irish Red is seriously malty and carries a little roasted flavor; Mistopheles is a big Imperial Stout with the usual notes of chocolate and coffee; The Remedy is a light and refreshing honey chamomile wheat beer made with Orange Blossom honey; The Great 38 is a pale ale brewed with Mosaic Hops (the availability of this beer depends on the availability of this particular variety of hops).

In late August, Moo-Duck put its Crowler machine in motion and joined the trend of small breweries selling 32-ounces of fresh, draft beer in a can. The Crowler is a big can of beer invented by Colorado’s Oskar Blues Brewery to meet the demand of patrons who wanted beer to go.

November 5 marks the brewery’s second anniversary, and Moo-Duck plans to release a limited amount of King Slava Russian Imperial Stout, which is aged in Jack Daniel’s whiskey barrels. A recent upgrade from a 1.5 bbl (barrel) to a 5-bbl system will allow Moo-Duck to increase production to provide local restaurants and bars with its product. 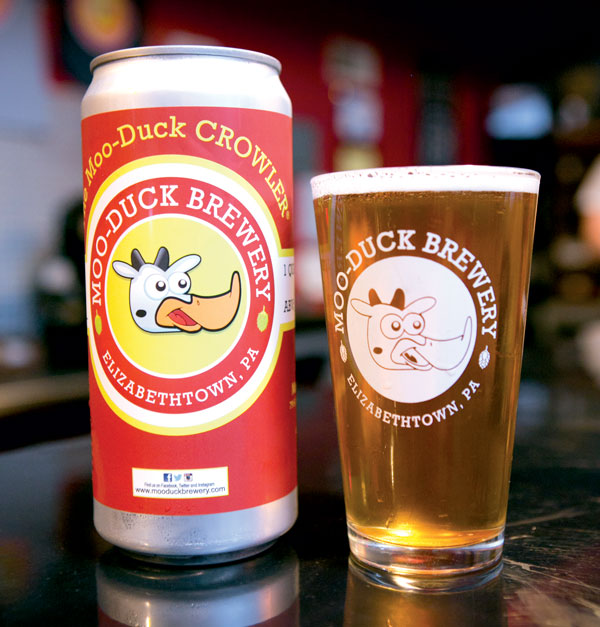