Whole-animal utilization, which is better known as nose-to-tail eating, ensures as little waste of an animal as possible. Locally, a few Lancaster County masters of cuisine have taken it upon themselves to champion the movement. While the results are environmentally and socially responsible, they’re also downright tasty!Sean Cavanaugh at John J. Jeffries

Make no bones about it, Sean Cavanaugh is passionate about his food – where it comes from and how it is served. 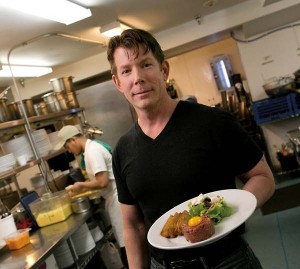 The Truth, a tartare dish made from grass-fed beef, is reflective of Sean Cavanaugh’s belief in responsible stewardship.

I first met Chef Sean Cavanaugh several years ago after being inspired by an item on John J. Jeffries’ menu. Called The Truth (with the menu asking if you can handle it), the tartare dish is made from grass-fed, dry-aged beef. Although the raw, minced-beef entrée is modified slightly to incorporate seasonal ingredients, it has remained virtually the same since making its debut. And, I still love it.

In talking with Chef Cavanaugh, I quickly learned of his deep passion for responsible stewardship that extends to all the ingredients served in his restaurant. “My personal beliefs are expressed through my food,” he explains. A graduate of the Culinary Institute of America, the chef’s career took him to restaurants at resort properties all over the United States. The Pittsburgh native moved to Central PA to open a restaurant in which he could promote a quality dining experience that would benefit the entire community – from the farmer to the diner.

By making regular trips to local cattle farms, the chef is able to establish relationships with the animals and those who raise them. He knows what the cattle eat and how they are physically handling changing seasons. He knows the farmer and his family. By purchasing a whole cow, he obtains everything he needs for his restaurant. The practice also allows the farmer more independence to focus on quality rather than quantity. “It is best for the farmer who can sell a whole animal rather than pieces,” Sean notes. “If we use fewer animals, we use fewer resources.”

From the farm, the beef moves to Smucker’s Meats in Mount Joy, where it’s processed, dry-aged for three weeks, and eventually delivered to J.J.J. Cavanaugh expresses the importance of using bones (a few thousand pounds a month) and organ meats for such health benefits as increased minerals. “There is a great advantage in nose-to-tail eating, for enjoyment and health,” he points out.

Being able to select any part of the cow keeps him creative and allows for more experimental dishes to appear on the J.J.J. menu. As a result, diners have accepted the adventurous dishes. 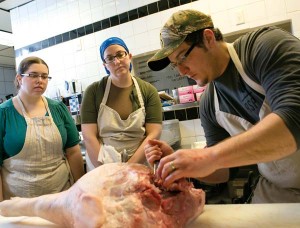 On January 31, Tony Page taught Pork Butchering 101, through which attendees learned how to butcher half a hog.

Tony and his wife/business partner Kristina are proud to support the animal-welfare cause. “A happy pig is a tasty pig,” says Tony.

In Elizabethtown, the star protein is pork. Tony Page, who owns Rooster St. Provisions with his wife Kristina, grew up a hunter. His father instilled a “kill it, eat it” mentality, thus whole-animal utilization was something he learned at a young age. The York native worked in kitchens during high school and went on to attend the Yorktowne Business Institute and School of Culinary Arts. After graduation, he worked his way through many prominent resorts and eateries in the United States, ultimately becoming chef de cuisine of Emeril Lagasse’s Chop House restaurant.

“I worked at several steak houses where we served tons of steaks,” he recalls. “After a while, my sous chefs and I marveled at the truth: meat doesn’t come from a box.” As a result, he started ordering whole animals, utilizing them head to tail – curing, aging and grinding (bones were used to create stocks and sauces). Eventually, he teamed up with his like-minded wife for a new, European-inspired retail venture that focuses primarily on pork (in December, they added lamb to the itinerary).

The pig is a prime example of how much of an animal can go to waste if not eating nose-to-tail. “Most people want what we call the 30 percents – chops and belly,” he explains. “Seventy percent of the rest of the animal is going to big factories and being processed.” He views the nost-to-tail movement as being a benefit for the ecosystem, explaining that when something dies, “the entire thing is being utilized in one location, instead of being shipped to several different locations across the country.”

The Pages offer custom cuts of pork, as well as standards like loin, ribs and shoulder. However, the selection of handmade sausages has put Rooster St. Provisions on the map. Link sausages change seasonally; when I spoke with Tony for this story, he had just finished making a batch of French onion sausage – imagine French onion soup in a pork-sausage form. Culturally inspired flavors such as Mexican chorizo, German weisswurst and Cajun boudin are found alongside traditional breakfast and country sausage. Rare cuts of pork are found in guanciale (cured pork jowl), culatello (aged, large-muscle mass in the rear leg), headcheese (the head meat) and terrine (assorted parts).
Outside of the display case, the Pages offer classes on butchering, sausage-making and curing. 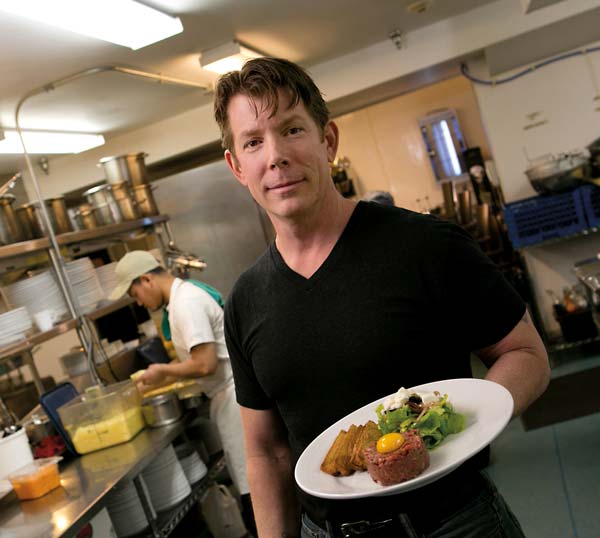 The Truth, a tartare dish made from grass-fed beef, is reflective of Sean Cavanaugh’s belief in responsible stewardship.