In recent decades, damage to our ornamental garden plants and the larger landscape caused by white-tailed deer (Odocoileus virginianus) has become an increasingly widespread problem. Once only a rural annoyance, it is now a complaint of suburban gardeners.

The problem is caused by a number of circumstances. The large predators of deer have disappeared because of the clear-cutting for agriculture, which at the same time has created browsing habitat for deer. The deer population is continually losing more of their accustomed haunts due in part to residential subdivisions cropping up everywhere. In the early 1900s, the white-tailed deer population totaled less than 500,000. Today the number of deer is growing, and it is estimated that there are more than 15 million deer in the United States.

A deer will eat between 6 and 10 pounds (2.7 and 4.5 kg) of vegetation a day. A buck requires 4,000-6,000 calories each day, while a lactating doe consumes 4,500 calories daily. When this is taken as buds, leaves, tender shoots and flower parts, the impact on garden plants is overwhelming. Whether deer will target a particular plant species depends on many factors besides palatability: weather conditions, availability of preferred foods, seasonal factors, snow cover, nutritional needs, previous feeding experience, availability of alternate foods and movement patterns.

A plant considered resistant in one part of the country can be ravaged in another. Because deer lack upper incisors, browsed twigs and stems show a rough, shredded surface. Damage caused by rabbits, on the other hand, has a neat, sharp 45-degree cut. Rodents leave narrow teeth marks when feeding on branches. Deer strip the bark and leave no teeth marks.

The antler-rubbing behavior of bucks during early fall is damaging to small hardwood saplings and conifers with stem diameters of under 6 inches. For that reason, it is best to cage the trunks of treasured young trees as the first fall chore. 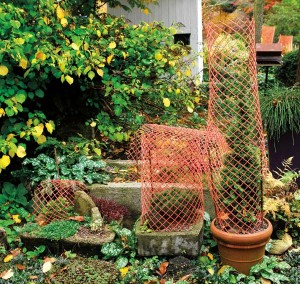 Caging can help to deter deer from devouring small specimens of conifers during cold-weather months.

Placing various repellents throughout the garden has been suggested – like bags of hair, fragrant soaps, various herbal and garlic preparations – and there are countless widely marketed commercial concoctions. These methods are usually effective only if the deer pressure is light and, even then, most work only temporarily. The only dependable remedy is to exclude the deer with tall fences, an expensive and often unsightly solution. Smaller specimens can be protected with chicken-wire cages. Dogs, especially beagles, are often effective provided they are in the garden at night.

Another strategy is planning your garden space by placing susceptible plants only in protected areas, perhaps close to the house, in a fenced yard, or in a ring of less-preferred species or barrier plants.

In my country garden, it seems the deer have completely lost their fear of structures and people and boldly browse within a few feet of my windows. I have learned to tolerate a certain level of deer damage.

Conifers provide structure in our gardens throughout the year and are among the longest-lived (and costliest to replace) plants in our landscape. Damage to them is particularly upsetting because many never recover their natural form. Landscaping with deer-resistant species is a necessary option. On this month’s Gardening Journey, I offer a list of conifers to consider when one is forced to share gardening space with marauding deer. However, readers should keep in mind that lists of “deer-resistant” plants are always a matter of dispute.

FIRS (Abies) are a good choice. Some to consider: Abies concolor ‘Candicans’ is one of the bluest conifers and far superior to the over-used Colorado spruce; Abies koreana ‘Silberlocke’ offers tightly curved-in silvery foliage and purple cones; Abies nordmanniana is stately and elegant. For a slow-growing, spreading, bright golden-yellow cultivar, look for ‘Golden Spreader.’

CEDARS (Cedrus) are another option. Cedrus atlantica, the blue-atlas cedar, is the hardiest, while ‘Glauca’ and ‘Glauca Pendula’ are the most popular, though often poorly placed. With global climate change, Cedrus deodara is worth trying. Great cultivars include the landscape-sized ‘Karl Fuchs’ and ‘Kashmir.’ For the home garden, consider ‘Devinely Blue,’ a wide-spreading and flat-topped mound, and ‘Feelin Blue,’ a dwarf, spreading form. Alaska-cedar (Xanthocyparis nootkatensis Syn:Chamaecyparis nootkatensis) ‘Green Arrow’ is a narrow form with branches that sweep straight downward. ‘Pendula’ is an elegant, weeping, landscape tree.

Hinoki false-cypress (Chamaecyparis obtusa) is enjoyed for its rich, dark-green foliage that is held in short flat sprays; there is a cultivar for every possible design, from a small container to a 50-foot tree. Rather adaptable to heat and drought conditions. ‘Crippsii’ is a slow-growing accent with ferny, golden-yellow foliage; ‘Nana Gracilis’ is a universally admired selection that reaches only 3 feet.

JAPANESE-CEDAR (Cryptomeria japonica) is appreciated for its graceful habit, shade tolerance and beautiful foliage. ‘Black Dragon’ is an upright cultivar; and ‘Globosa Nana’ is broadly rounded. Best choices for larger specimens are ‘Rein’s Dense Jade’ and ‘Yoshino’ (however, this year the deer were browsing the tender growth on young specimens in my garden).

Leyland cypress (×Cupressocyparis leylandii) is versatile, adaptable, salt-tolerant and very fast-growing for purposes of creating a quick screen or hedging. Must be planted in the spring. ‘Naylor’s Blue’ is true to its name (ditto this past winter).

GAINT ARBORVITAE (Thuja plicata) is very handsome for the home landscape with luxuriant, wide-sweeping boughs. It handles snow and ice well and is good for hedging with its single-stem habit. ‘Green Giant’ is a vigorous hybrid.

HEMLOCK (Tsuga), the state tree of Pennsylvania, is valued for its fine texture and shade tolerance; however, the species is not recommended because of its unrelenting demise from a pest, woolly adelgid. Dwarf choices that could be sprayed by the home gardener include ‘Bennett,’ ‘Cole’s Prostrate,’ ‘Everitt’s Golden’ and ‘Pendula.’

JUNIPER (Juniperus ssp). Countless cultivars are to be had for public and private gardens. Almost all have prickly foliage and are undemanding in cultivation, provided they have full sun and good drainage. Exceptional selections are J. virginiana ‘Corcorcor’ Emerald Sentinel™, narrow and conical, remaining a rich green all year and reaching 25-30 feet. ‘Grey Owl’ exhibits soft, silver-gray foliage, abundant cones and wide-spreading shrub.

SPRUCE (Picea). The exception is the oriental spruce, P. orientalis, possibly because of its softer needles. A noteworthy choice for the home garden is P. omorika ‘Pendula Bruns.’
Pines (Pinus). This past harsh winter, for the first time, I had damage on the tip growth of pines which, unfortunately, will not recover.
Douglas-fir (Pseudotsuga menziesii).

Deer were an important food source for Native Americans before the colonization by Europeans. Hunting by native tribes was effective in keeping a balance between the population and their plant supply. With the clearing of land for agriculture and the elimination of their natural prey, deer and forests were almost eliminated. In the early 20th century, the state forest system was established, the designated land regenerated, deer were reintroduced, and their population rapidly expanded. About the same time, doe management was introduced, and by the 1930s large portions of the state were experiencing severe habitat damage. Deer populations peaked in the 1970s and has been out of balance ever since.

In recent years our forest understory has been dominated by species that the deer do not prefer: beech, mountain laurel and huckleberry. Also, exotic invasives have moved in: multiflora rose, honeysuckle, and autumn olive. Federal studies of forested areas in northern Pennsylvania reveal there is not enough new native growth to replace the existing forest. In addition, many wildlife species are affected by the elimination of their desired habitat.

These should be applied before deer become habituated to your plants and will need to be regularly reapplied. This method only works when the damage risk is low. There are numerous recipes for homemade concoctions (usually involving garlic, eggs and hot pepper sauce), but success is questionable especially during late winter and early spring. Commercial repellents are usually odor- or taste-based and must not be used on plants intended for human consumption. They most often contain active ingredients of urine, putrescent egg solids and dried blood.

Bars of soap or unwashed cut hair placed in cheesecloth and hung from shrubs have inconsistent success.

Fence options include wire, plastic or electric. Fences must be at least 7-feet high and in contact with the ground to keep deer out. For years I’ve circled smaller treasured plants in plastic mesh fencing. When circling a plant, the mesh must be taut, or it will collapse with snow or ice. I’ve used 6-foot rebars and zip-ties with general success. Electric fences marked with ribbons and baited with peanut butter can be very effective but are generally not practical for suburban gardens.

Dogs that are out at night can be very effective, but this usually means the property will need an invisible fence system for the animals’ security. Other methods usually work for only a limited period of time: yard lights, loud radios, shiny objects and motion-activated water sprinklers. 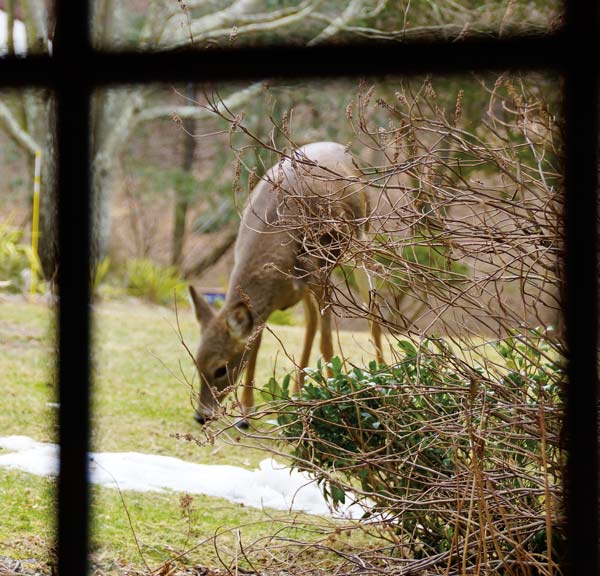