Don’t let summer slip by without savoring that quintessential treat: ice cream! But, before you indulge, sample Lickity Split’s array of starters, salads, soups and sandwiches.

Housed in a portion of New Holland’s historic Kauffman Hardware building, the 1,100-square-foot restaurant has garnered its fair share of attention over the past year. In August 2014, USA Today named Lickity Split as one of the “10 Best Stone-Cold Ice Cream Shops” in the country. The eatery was also featured on the Travel Channel. In June, it could be seen on a segment of HGTV’s House Hunters.

Owners Mitch and Gina Dissinger are New Holland natives and take great pride in their hometown. The former hardware store provides a warm, nostalgic setting thanks to tall ceilings and original hardwood floor in the front dining area. A large mural depicting New Holland’s Main Street in the 1800s has been in Mitch’s collection for a number of years. “I really love local history and have been collecting memorabilia for quite some time,” he says. Fittingly, The New Holland Area Historical Society – Mitch is a founding member and serves on the board of trustees – is housed on the second floor of the Kauffman building.

Gardeners will appreciate the fact that Lickity Split’s tables always feature fresh flowers that come from Gina’s cutting garden at the couple’s home (flowers may also be augmented by a local grower). Kids’ entertainment extends to games, toys, crayons and rolls of paper to color on.  “As a mom, I know the importance of keeping kids occupied. We try to have something here that will interest everyone,” Gina says.

Mitch and Gina have always enjoyed cooking, especially when they can do it together. Gina says that she’s more of a Pennsylvania Dutch cook, while Mitch’s talents lean to the gourmet side. After launching a catering business that garnered rave reviews, they purchased an ice cream truck in 2006 and began offering hand-dipped ice cream. A larger truck joined the enterprise in 2008. Now, Lickity Split is a three-pronged venture: the restaurant (which opened in June 2010), catering, and ice cream trucks that are mainly used for special events such as weddings, company picnics or customer/employee appreciation parties.

The menu is devoid of fried foods since the couple wanted to focus on more healthy items. “We try to source as much as we can locally. We roast the turkey that’s used on sandwiches ourselves. I hand-roast the pulled beef for our Tuesday special for 20 hours, and our chicken salad is made by a local deli,” Mitch says. Gina adds that soups are homemade – chicken corn noodle is a menu staple, and most soups are gluten-free.

Peruse the menu and you’ll notice many of the items pay homage to New Holland. For example, there’s the Railroad Avenue Sub, Kauffman’s Cuban, the Sales Barn Beef Dip and Weaver’s Chicken. One of Lickity Split’s signature sandwiches is Thanksgiving Day, which features turkey, stuffing and cranberry sauce on a Kaiser roll. “I grew up eating that sandwich,” Mitch says. Other popular sandwiches include the Garden Spot Melt (the top seller), Trimmer’s Tribute (which includes turkey, bacon and apple butter) and the Stuffed Pretzel Melt. Any sandwich can be made with gluten-free bread. A child-friendly menu is also available.

Ice cream in the form of shakes, floats, cones, dishes and sundaes rounds out the restaurant’s menu. According to Gina, the most popular ice cream flavor is salted caramel truffle, and top selling sundaes are Jiminy Cricket (mint chocolate), Kauffman’s Jailhouse Rock (black raspberry), and Wet and Muddy Road (caramel topping). One sundae, the Sweet Road Apple, is a chocolate lover’s dream dish. Plowed Field features cookies & cream ice cream “plowed” with crushed Oreos and other confections. Guests are also welcome to design their own sundaes.

The shakes are equally as intriguing. The Campfire is topped with roasted marshmallows, while the Sundae Shake entails a shake with a sundae on top.
Don’t dare skip the festivities with the excuse that you’re on a diet: the petite-sized scoop of ice cream has your name on it! 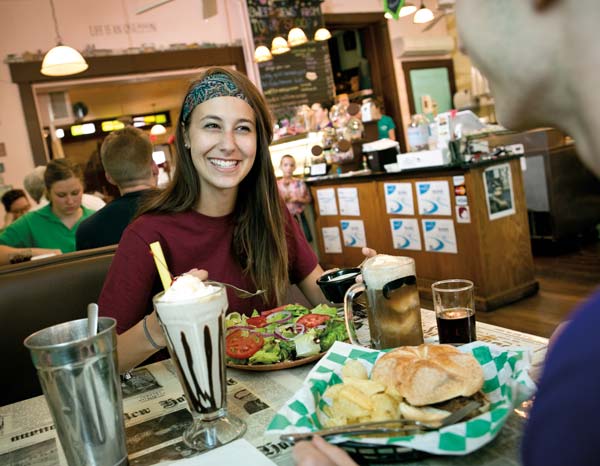 Lickity Split’s menu ranges from soups and salads to sandwiches (and includes options such as gluten-free). However, as Hannah Tennis can attest, no visit is complete without indulging in one of the restaurant’s ice cream confections.