After months of searching for a new home – and with an agreement already in hand for the home they lived in – John and Erika Vastyan needed a property soon. Their search ended when they became the owners of a house that had definitely seen better days. Now, post-remodel, they envision it as a place where they can settle into retirement.

John discovered what he calls “the renovation project from a bad dream” when he and his good friend, Pete Coleman, were riding motorcycles one day, enjoying a ride along country roads. Returning to Manheim on a back road, something caught John’s eye, so he signaled to Pete that he was turning around for another look.

An auction sign was posted where a driveway crossed a small bridge, but no house was visible through the trees and undergrowth. Walking in to investigate further, he could see a portion of a house that appeared to be built into a hill. For reasons John cannot explain, he was drawn to the property and its potential.  “We were ready for one last, great adventure,” John says. “What we didn’t anticipate was just how great that ‘adventure’ would be,” adds Erika.

After placing a winning bid on the property, the couple turned to Lititz-based Elm Ridge Construction for help. Fifteen years ago, the couple had worked with Elm Ridge to build their home in Manheim. The experience was excellent, so with that in mind, they chose to embark on a mission to remodel their newly purchased home.

They had their work cut out. “The property was a jungle when we bought it, with loads of overgrown or diseased trees and piles of debris everywhere,” Erika recalls. Manheim-based Arborist Enterprises had crews on-site for several days. “I think they removed 20 trees, and we eliminated a bunch more,” she adds.

The house was in even worse condition. In January 2015, Elm Ridge crews began to dismember the inside of the raised-ranch home that was built in 1971. The electrical components, interior walls, flooring, insulation and plumbing filled countless dumpsters. Even the septic lines, inside and out, had to go. On top of that, there was radon to remove and water problems to solve, as well.

The Vastyans’ now-remodeled home borrows influence from Germany and Lancaster County, with a bit of California sprinkled in. Actually, all the elements are related: Germany is Erika’s home of origin; John, who grew up in Hershey, met her there as a soldier during his first tour of duty. They then spent two years in Monterey, California, before John completed his military service. They’ve lived in Lancaster County for most of their married life.

However, they grew up in very different homes, with greatly different influences. “My parents were very much into art,” John explains. “But Erika lived in art,” he continues, explaining he was amazed at the beauty of old German architecture and way of life. “Together with Erika’s family, we roamed the countryside. Around every corner was a new surprise.”

Added square footage and an entirely new roof line to match that of the new garage served “to create an arts-and-crafts-style home that appears to be perched on a cliff,” explains Kevin Hess, the president of Elm Ridge. Just above the main cliff, the home’s most prominent windows, near the main entry, look west. From the outside, the wide, two-tone trim gives visitors the impression of a Lancaster County quilt.

One of the first things Erika wanted was a wood-fired cookstove in the kitchen. It got its first workout last winter, producing fresh bread from wheat Erika grinds into flour. She also produced giant cauldrons of stew. “The new [Elmira] woodstove also has the advantage of providing loads of heat in the kitchen, perfect for cold winter days and nights,” she says.

In the mechanical room, Haldeman Mechanical pros installed a small, wall-hung boiler to serve an eight-zone hydronic system that uses warm water to heat the home and domestic water. Most of the rooms are zoned individually, with German-made, tubular wall panels.

According to Mark Haldeman, president of the Manheim-based firm, their technicians also installed a high-efficiency, multi-zone, split-system heat pump to provide cooling and supplemental heat for the home.

Also, a Field Controls heat-recovery ventilator (HRV) was installed to bring fresh air in while eliminating most of the difference in outdoor temps or humidity, year-round.  “We had no idea how important this system was until we learned about the need to reduce humidity in a ‘tight’ house, while introducing fresh air,” says John.

The Vastyans were looking for a “signature” exterior to match the unique interior spaces. With Kevin’s help, they found it when Duane Martin of Keystone Lawn Company in Mount Joy showed them literature from New Holland-based NewLine Hardscapes, manufacturer of Rosetta Outcropping, a realistic, precast retaining wall system that fits together like a puzzle. Soon, multiple “limestone cliffs” were assembled to tame the hilly lot.

The last push by Elm Ridge crews was completion of the home’s expansive deck, an Azek masterpiece with an expressive gazebo.

Last spring, John and Erika asked Keystone Lawn Company for more hardscaping – a Rosetta stone stairway, fireplace and wall to match the larger stone retaining walls.
Erika then turned to Bowman’s Stove & Patio in Ephrata for something she had postponed for a long time: furnishing the deck. “Now, we’re ready for guests,” she says.

Like most homeowners, the Vastyans have compiled a rather ambitious to-do list for their property. There’s a small pond to dredge, eventually, and a stream to tend. There’s an expanding garden that will someday become a collection of raised beds.

Life at the new house also entails a sense of normalcy, as there are dogs to care for and chickens and goats to raise. Of course, it’s also a place filled with adventure for grandchildren.

But, according to Erika, “In a way, we don’t ever expect to fully complete the to-do list. And that becomes ‘the rest of the story.’” With their son, Dan, and daughter, Rachel Ruhl, the Vastyans own Common Ground, a small PR firm that serves the building industry. Dan and his wife, Vanessa, live half a mile away; Rachel, her husband Mark, and their daughter, Coralie, also live nearby.

“We all work together and enjoy the experience, so this home has become our anchor for both the business and the extended family,” says John. “For Erika, with relatives in Germany and Canada, the door is always open. It’s also a blessing to be just a few miles from our church.”

Gazing out from the now-furnished gazebo, the sun dips in the sky, setting the pond aglow. “This truly feels like home,” John says. 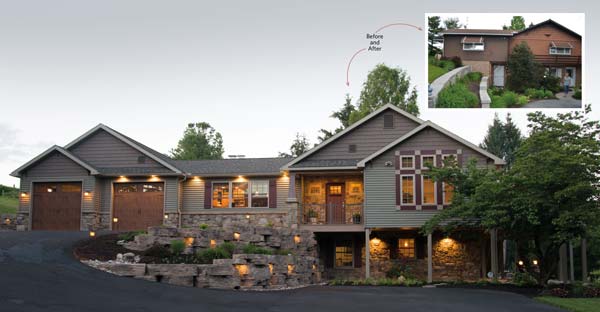