’Tis the season to celebrate! If a holiday dinner is on your schedule or you feel like welcoming the New Year with music and dancing, this downtown destination offers three floors of dining and entertainment under one roof. 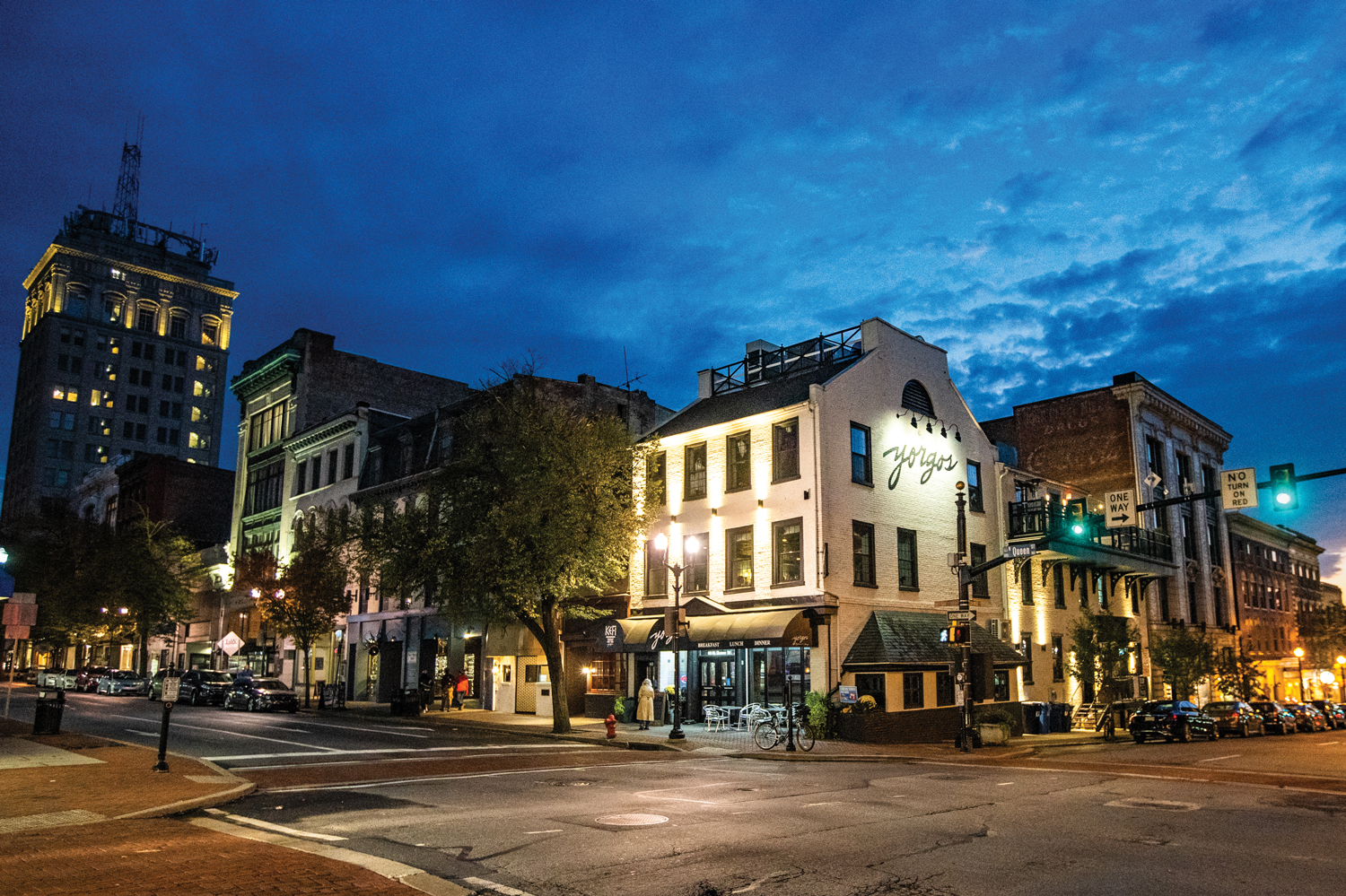 In 2017, an eight-month renovation project transformed both the interior and exterior of the building the Katsaros family purchased in 1989.

The family-owned-and-operated business opened in 1989, when George and Ekaterina Katsaros purchased the iconic Zimmerman’s Family Restaurant at the corner of Orange and Queen streets in Lancaster. A second generation, including sons Antoni “Tony” and Gus, have made the business a family affair. “I grew up in the business doing whatever I could, like washing dishes,” Tony recalls.

Not only are there two generations involved in the business, but its customer base extends across several generations, as well. “We have a lot of long-time customers; some have dined with us ever since we opened,” George says. “We have some customers who came here with their parents and now they’re coming in by themselves or with their families.” 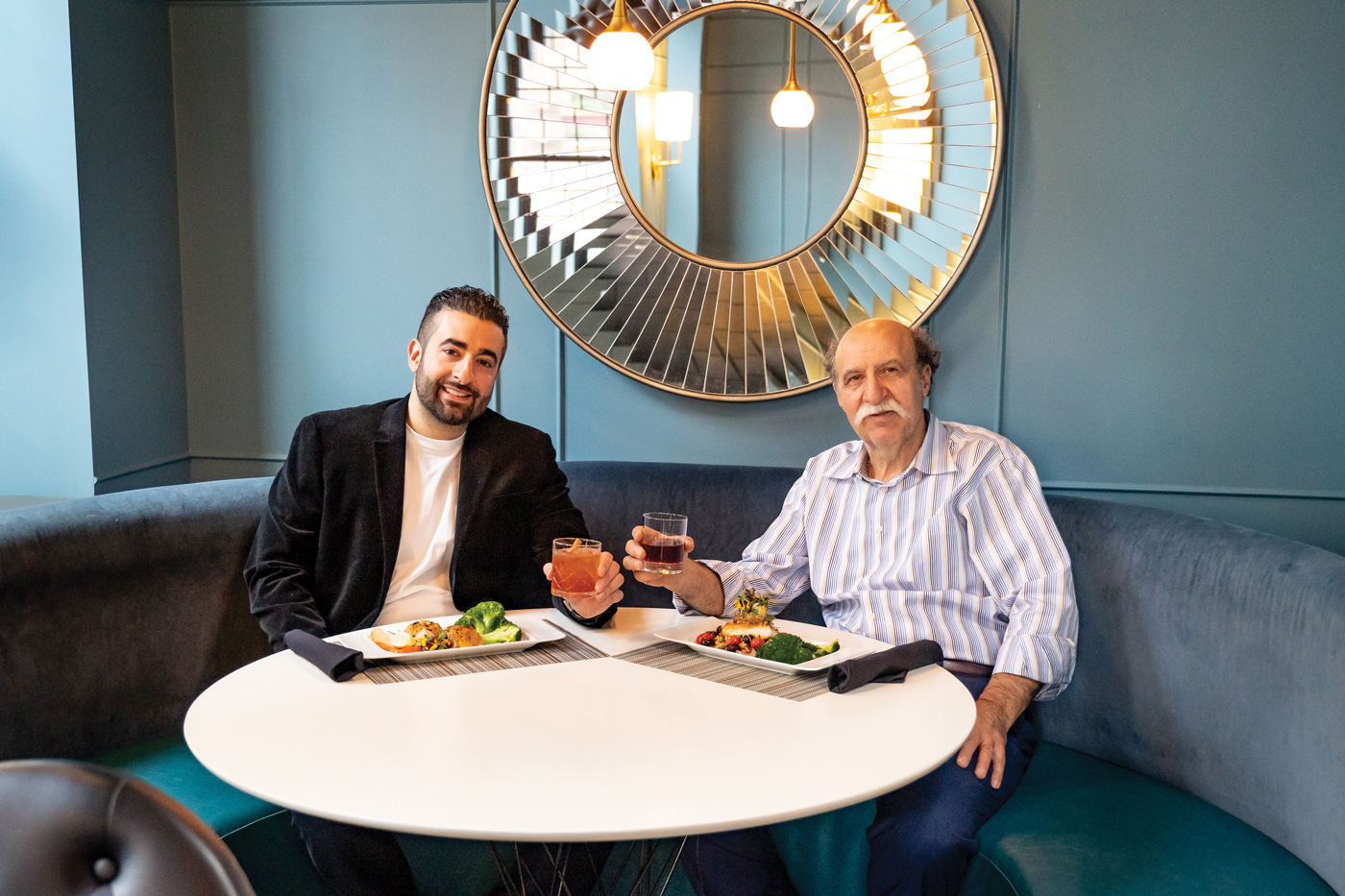 The restaurant’s founder and namesake, George Katsaros (right), with his son, Tony, who grew up in the business. Kefi’s color scheme pays homage to the Aegean Sea and other elements of Greece.

Over the years, the restaurant has gradually evolved via several renovations and expansions. The 2007 renovation included a name change from Zimmerman’s Family Restaurant to Yorgos Restaurant & Lounge. The name Yorgos is a nod to the family’s Greek heritage. Yorgos is the Greek form of George, making it a fitting choice when the family renamed the restaurant. During that renovation the first floor dining area was completely gutted and revamped. Hardwood floors and a U-shaped bar were installed. Several large-screen TVs are scattered throughout the area.

The restaurant closed for eight months in 2017 for extensive renovations that resulted in adding second and third floor dining areas, including the rooftop deck. The kitchen was also shifted to the lower level and an elevator was installed to provide access to all of the floors. 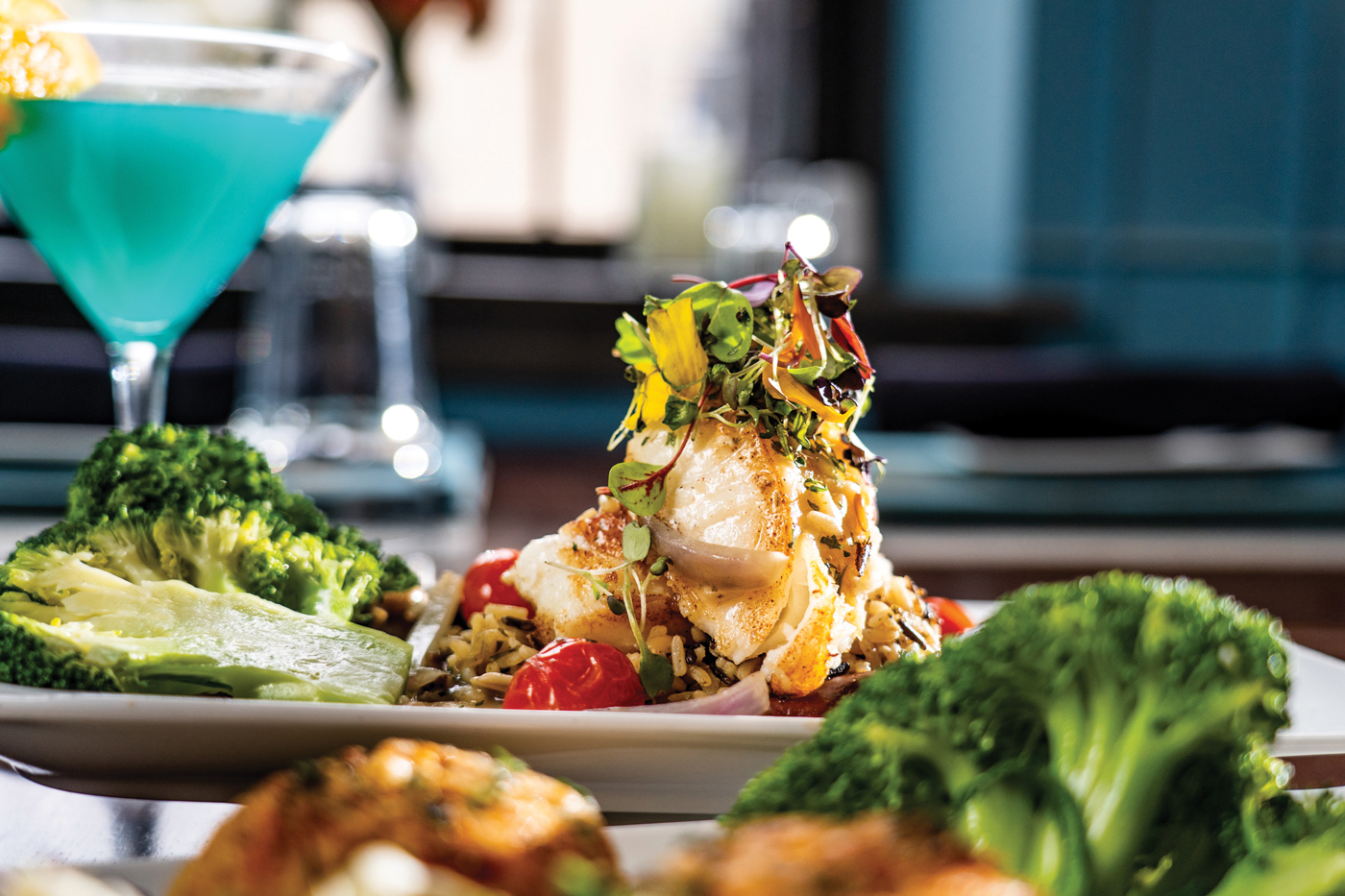 Each of the two dining venues – Yorgos Casual Pub on the first floor and Kefi Mediterranean Taverna on the second floor has its own atmosphere and menu. Tony says Yorgos, which seats 50 at the bar, high-tops, tables and a banquette, is more casual, with the menu’s focus being pub fare. Kefi is more upscale and the menu emphasizes Mediterranean cuisine. It seats about 70 and has its own bar. The third element – the rooftop venue, Little Mykonos – features indoor/outdoor dining and seats about 60 inside and 30 outside. It’s also home to music and dancing and is serviced by its own bar. “There’s an incredible view from the rooftop area. It’s great for parties,” Tony says of holiday gatherings, rehearsal dinners, showers, small weddings and other special celebrations that are held in the space. It’s also a great spot to watch Lancaster’s fireworks and New Year’s Eve activities. 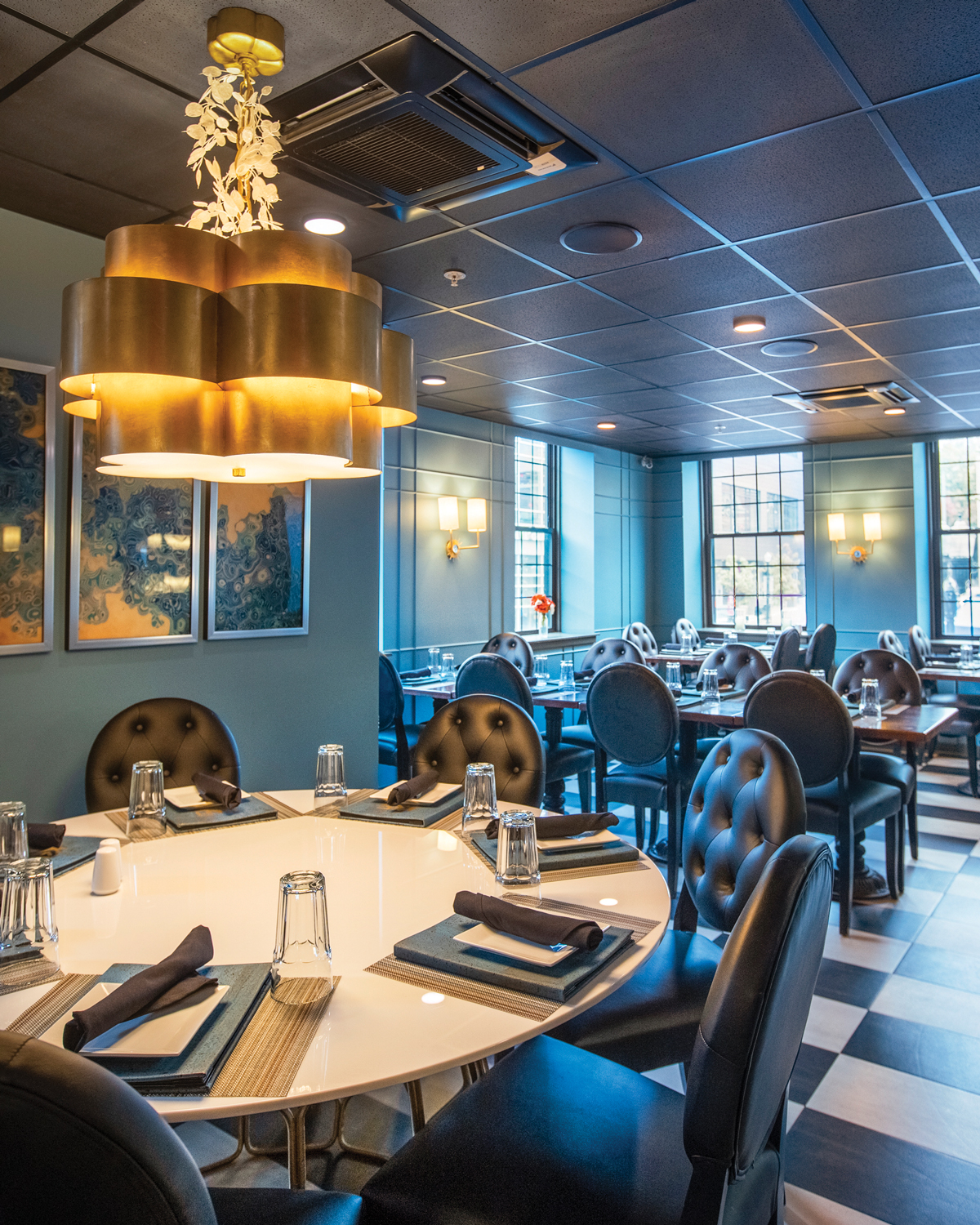 A second-floor storage area was transformed into a Greek-inspired taverna, while the third floor was reclaimed to function as a music and entertainment venue.

Last year’s pandemic regulations prompted outdoor dining to be extended into the winter months. At Yorgos, guests could dine on the rooftop in heated “bubbles.” George says the bubbles will be in service again this year. “They create an intimate dining space,” Tony says. “It’s really a different experience to be in one of the bubbles when there’s snow on top of them,” George adds of the ambiance the bubbles create.

Yorgos’ pub-style menu features soups, appetizers (starters), burgers made with Certified Angus Beef, paninis and sandwiches, flatbreads and entrées such as fish and chips and pasta primavera. Greek salads and entrées are available, as well. There’s even a kid’s menu. Breakfast is served daily until 1 p.m. 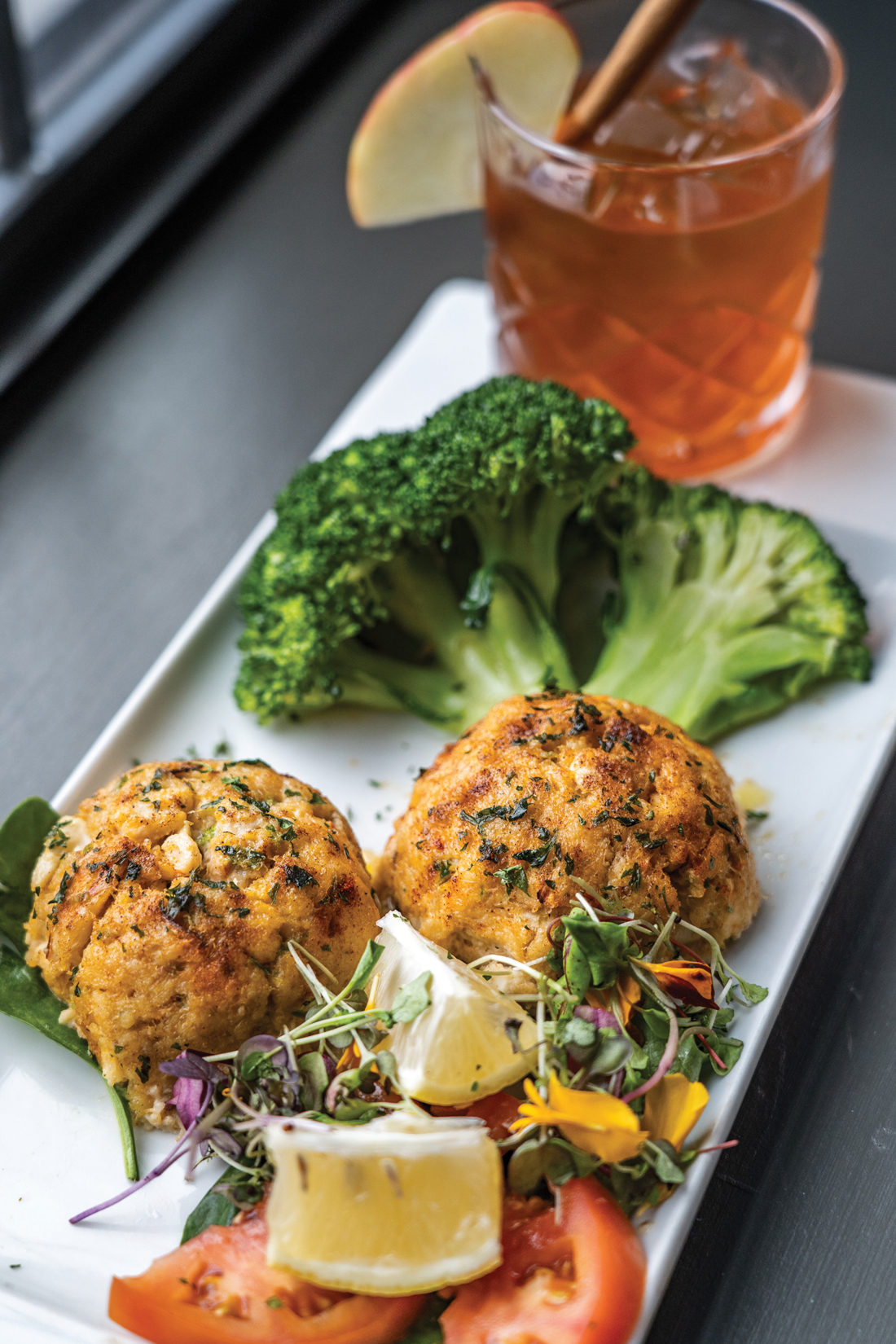 Broiled crabcakes are accompanied by a cocktail Chris calls a Yorgos Hennessey. “We put our own spin on the classics,” he says of the restaurant’s specialty cocktails.

Kefi’s menu features salads (including a grilled Greek salad), appetizers such as fried eggplant and fried calamari, and entrées such as pasta, steak, fish and seafood. Greek specialties such as Psari Plaki (baked halibut), Paidakia lamb chops and Mediterranean chicken also define the menu. “We’re known for our Greek items. We use family recipes and recipes we’ve developed over the past 32 years,” Tony says.

One of Yorgos’ and Kefi’s signature items is avgolemono, a classic Greek soup made from chicken, lemon and rice. George says it’s been made in-house by Ekaterina since the restaurant opened. Another Greek favorite is saganaki, a Kefalograviera cheese flambé that’s made table-side. Desserts include a Greek favorite, baklava. 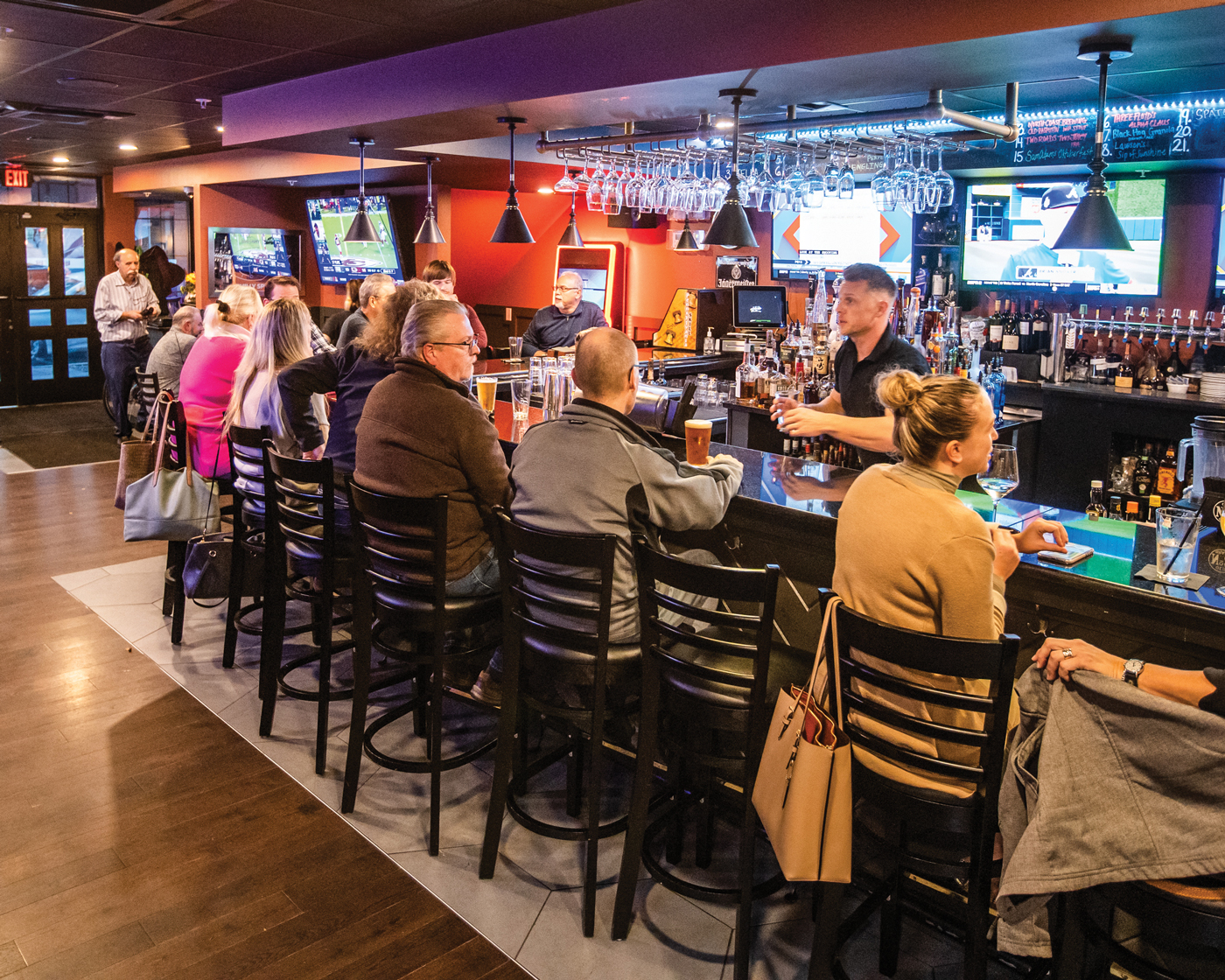 The ground floor’s pub-style atmosphere makes it a favorite destination to enjoy an after-work drink. 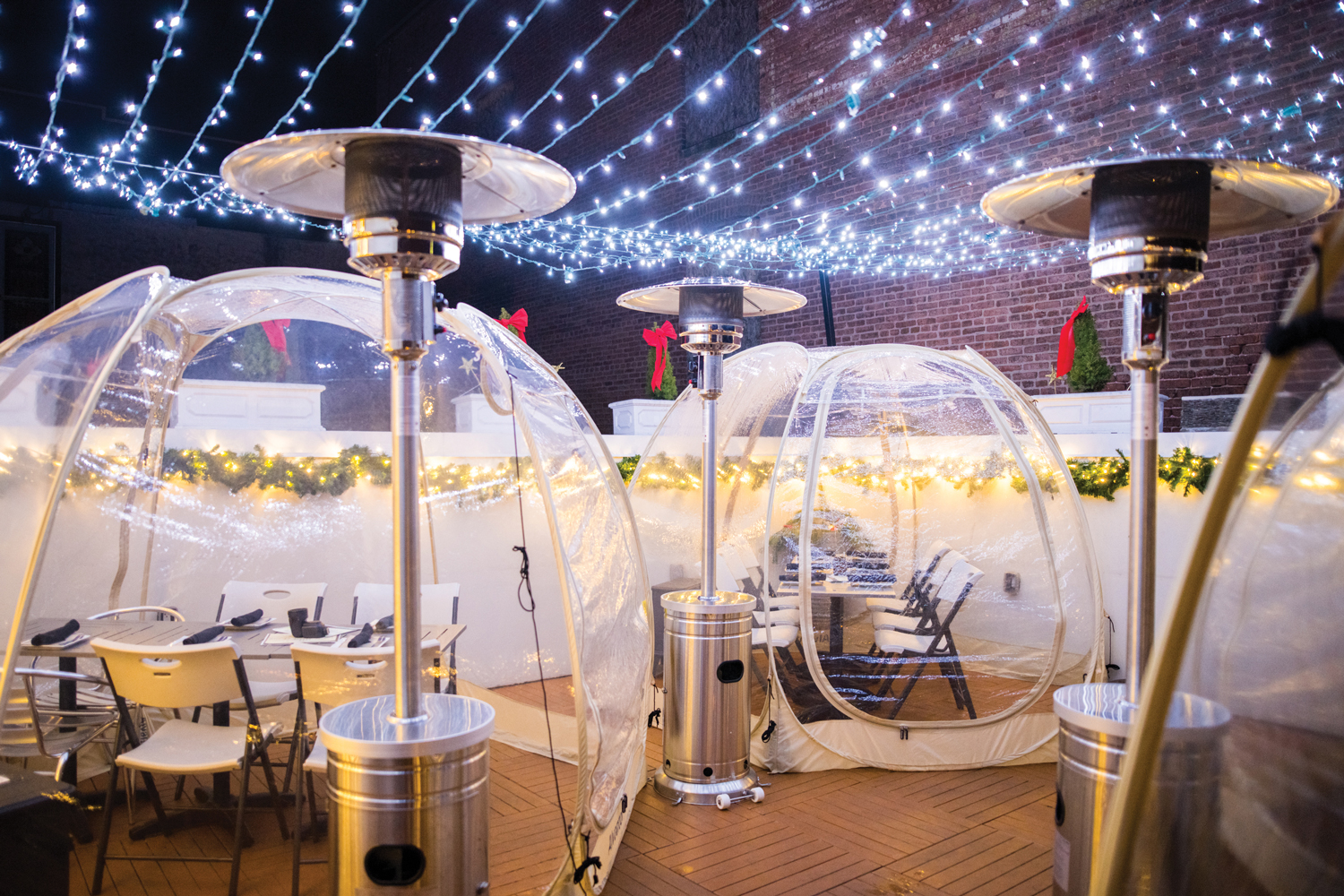 The rooftop “bubbles” that debuted last year will be back in service this winter. Photo courtesy of Yorgos.

Yorgos Restaurant and Lounge is located at 66 N. Queen St. Yorgos’ hours are 8 a.m.-2 a.m. daily. Kefi’s hours are 4-10 p.m., Monday through Sunday. Little Mykonos’ hours are 5 p.m.-close, Monday through Sunday. Reservations are suggested and can be made online via the restaurant’s website or through OpenTable. Carry-out is available. For details, call 717-394-6977 or visit yorgoslancaster.com, Facebook and Instagram.