Open to the Breeze!We may have suffered through sub-zero temperatures in February, but April makes us want to throw open the doors and windows and let fresh air waft through our homes.

A screening system was to build out the back of the columns to accommodate the tracks that the remote-controlled screens required.

Eighteen years ago, Neil Hollis was looking for a new venture. When he saw a product called Phantom Screens on the television show, This Old House, he immediately saw its potential. So, without ever seeing one in person, he applied to the manufacturer and was granted a distributorship.

At the first home show in which he displayed Phantom Screens, Neil was thrilled to meet This Old House hosts, Tom Silva and Richard Trethewey, who were there to do a seminar. He remembers that the Q/A session got underway with an attendee asking about the resiliency of the product. Tom shared that he and Richard tested many of the products used on the show on their own homes and, as a result, they had become huge fans of Phantom Screens.

Neil came away from the seminar knowing he had made the right decision. His company, Innovative Home Products, is the exclusive source for Phantom products in Central Pennsylvania and the Lehigh Valley. Based in British Columbia, Phantom Screens were developed in Holland more than 35 years ago. When their inventor moved to Canada, so did the company. When he moved back to Holland in the early ‘90s, he sold the business to a Canadian distribution company that is headed by C. Esther de Wolde. Phantom’s products are distributed throughout North America, Europe, Central America, Australia and beyond. The acquisition of a Florida-based company that had developed a motorized screening system allowed Phantom to further diversify. Neil reports the company’s main campus in Abbotsford, British Columbia, is breathtaking. “No matter which direction you look, all you see are the Canadian Rockies,” he says.

The premise of a Phantom Screens product for doors is simple. Envision a roll-style shade. Put it on its side and you have Phantom’s very popular screen door that disappears into a custom casing unit that unobtrusively runs the length of an inner doorway. “Our client list ranges from owners of mobile homes to multi-million-dollar mansions,” Neil reports. “When homeowners see them, they’re instantly intrigued. They sell themselves.” He tells of encountering Tom and Richard during a repeat appearance at the home show in Harrisburg (they remembered him) and taking them up on their offer to do a guest-star turn at his booth. Tom told the group that had gathered: “This is the greatest product I’ve seen for the home in 20 years.” According to Neil, “They immediately sold 30 screens.” Over the course of 18 years, “We’ve done over 10,000 doors in Central Pennsylvania,” Neil says, adding that those figures are two years old. “I haven’t had time to update them,” he admits.

The reasons homeowners are drawn to Phantom products are varied. Aesthetics are probably at the top of the list. The system eliminates having to deal with an unattractive screen door that detracts from the look of your front door, or for that matter, the architectural style of your home. “During the eight or nine months of the year that it’s not needed, the screen is out of sight, out of mind,” says Neil.

The aesthetics angle also plays into the fact that more and more communities are being governed by homeowners’ associations and with them come declarations that ban screen doors, etc., which can diminish the continuity of a neighborhood. “We’ve never had a homeowners’ association turn down a Phantom screen door,” Neil reports. “In fact, in some communities, ours is the only product that is acceptable.” Even historical districts have given Phantom their seals of approvals. “One of our clients lives in a home that George Washington slept in,” Neil shares. In fact, Phantom is spearheading a project in Mobile, Alabama, that will result in the restoration of the Ford House, an Arts & Crafts bungalow that dates to 1906.

Creative applications are another attraction. In addition to doors and windows, Neil has seen clients utilize the screening for garage entrances and to enclose porches, carports, outdoor kitchens, gazebos and other outdoor-living spaces. Add the motorized component and convenience becomes a factor.

Phantom Screens are also environmentally friendly. “They almost pay for themselves when you consider what you save in AC costs,” Neil points out. He also notes that because the entire doorway remains open, a home will receive twice as much ventilation as compared to typical screen doors. On another level, during dreary winter months, homes are not robbed of natural light. “Typical screens will block 40% of natural light,” Neil notes. In the case of Phantom solar window screens, which were developed 15 years ago, 90% of harmful UV light is blocked from entering your house. (No more faded fabrics!)

The retraction factor also pays other dividends: Because the screens are tucked away during the punishing winter months, they are not at the mercy of the wind and weather, plus they stay cleaner longer. “Some window cleaners will even charge less, because they don’t have to deal with screens and storm windows,” Neil adds.

Lastly, pets love them. The door screens allow them uninterrupted views of the yard or street, thus providing hours of entertainment. “They’re one of the most impact-resistant products on the market,” Neil avows.

As you might guess, all the love translates into awards. The all-things-home website, Houzz.com, which boasts 25-million unique visitors per month, names Phantom as one of the products that attracts the most interest, plus promotes an unprecedented amount of discussion. Thus, Phantom received one of its 2015 “Best of Houzz” awards that relate to design and customer satisfaction.

Want to see Phantom Screens up close? Mark your calendars for this year’s Parade of Homes, June 13-21. Innovative Home Products will be outfitting Custom Home Group’s entry in Manheim with Phantom products! 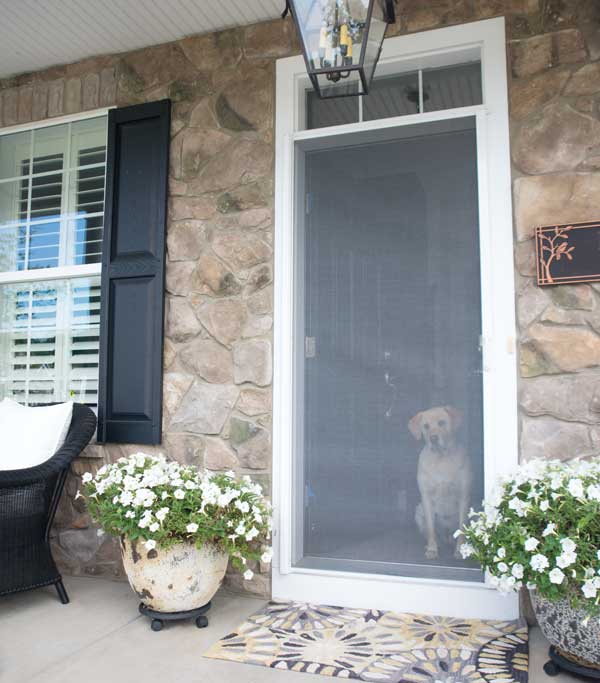 The most popular application is a front-door screen system.