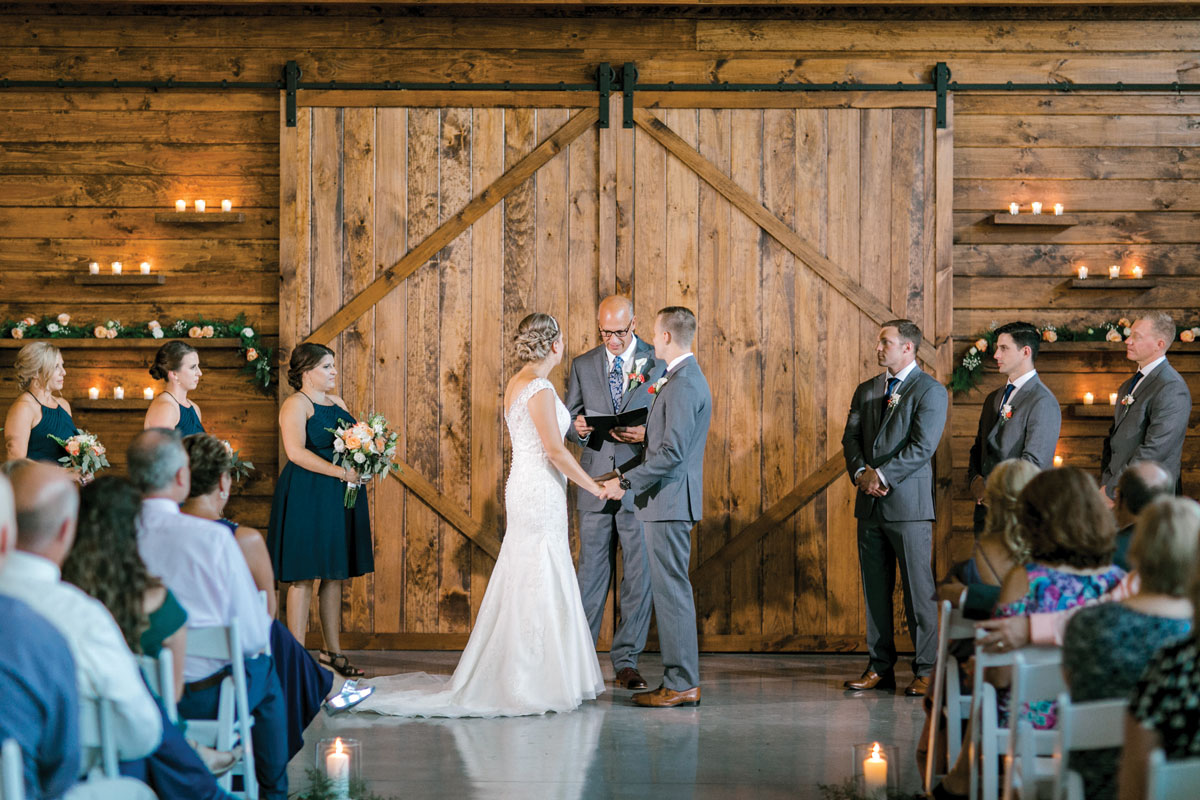 The Hay Barn at The Barn at Silverstone provided the setting for Emily Gerlach and Ryan Trees’ wedding ceremony. Emily’s father, Bryan, performed the ceremony. Emily’s gown was courtesy of the organization, Brides Across America, with alterations by Country Threads by Gail.

The wedding gown. It’s the centerpiece of a wedding. Emily Gerlach’s gown had a story all its own thanks to the nonprofit organization Brides Across America.

In late 2016, Ryan Trees, a logistics operations planner with the U.S. Army, was deployed to Iraq. He began blogging about his experiences, sharing the posts with family and friends. His mother, Penny Trees, a fifth-grade teacher at Kissel Hill Elementary, shared the blogs with a young co-worker, Emily Gerlach. In a show of support, Emily, who is a fifth- and sixth-grade intervention specialist, reached out to Ryan via Facebook. Soon, a long-distance relationship developed. The distance shortened in the summer of 2017 when Ryan returned stateside and was assigned to Fort Lee in Virginia. 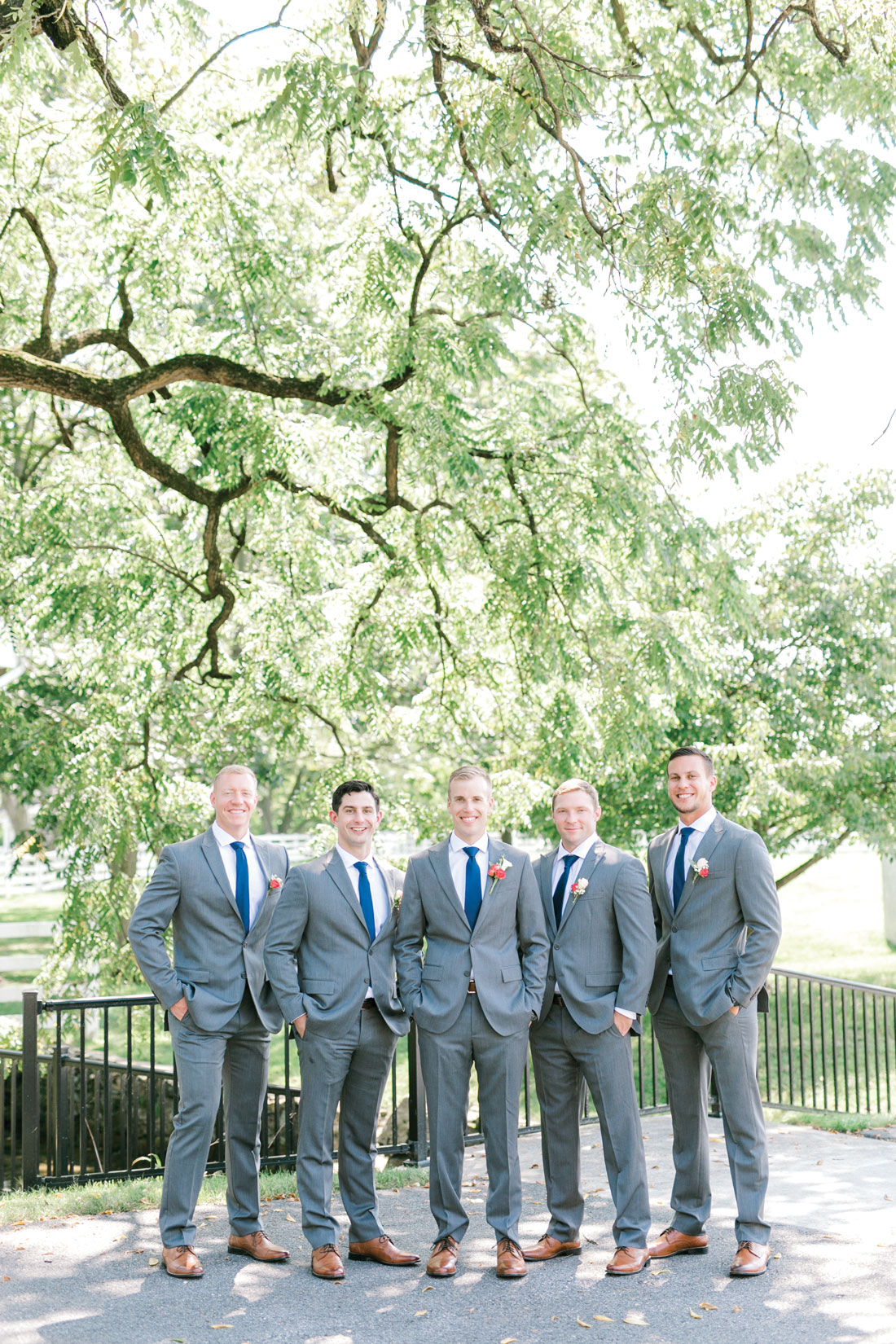 The two began traveling back and forth as often as their schedules allowed. With one or the other hitting the road, they estimate they racked up 10,000 miles on their trips between Lancaster and Fort Lee. For a time, it appeared they would have to resume their long-distance relationship, as Ryan received orders that would take him to Italy. But, before he could leave, he received a medical retirement from the Army and returned to Lancaster in September 2018. He now works for The Hershey Company. 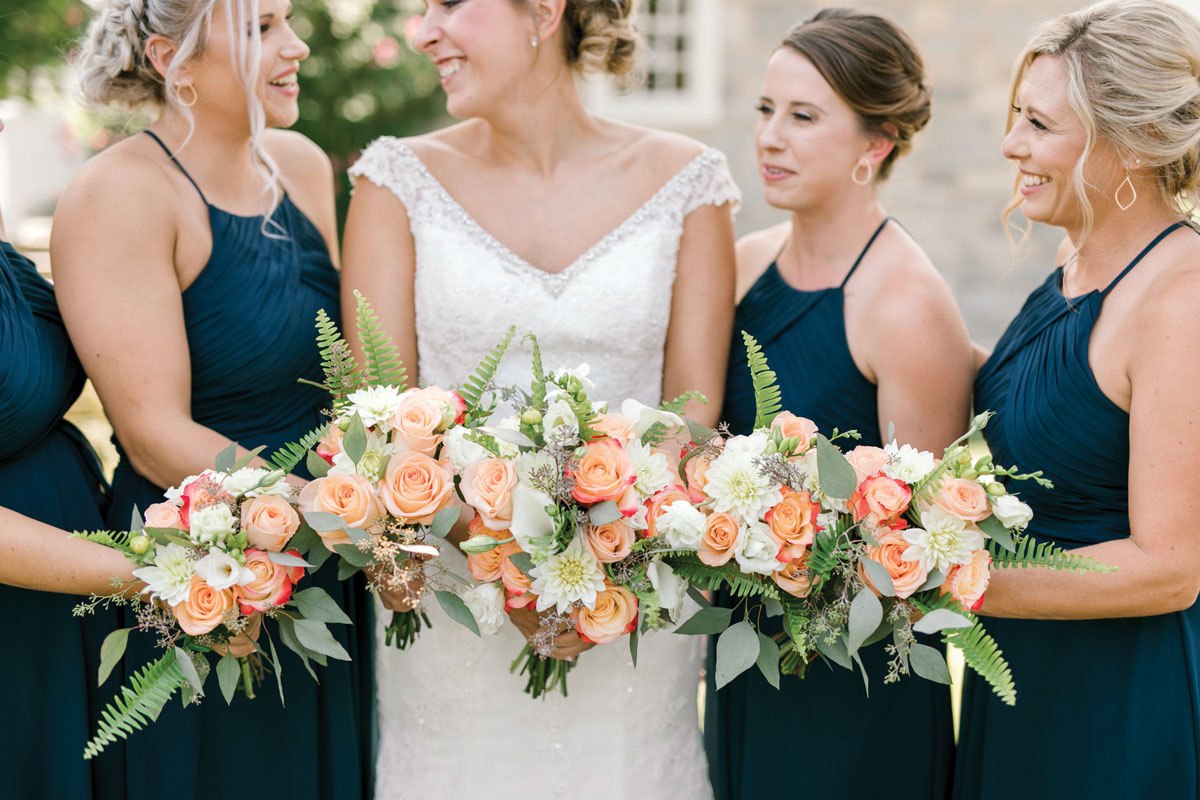 The attendants’ dresses and the bouquets echoed the navy, coral, gray and green color scheme.

A month later, Emily and Ryan found themselves in Rehoboth Beach. “We had gone for the Seawitch Festival,” she explains. Because of a nor’easter that impacted the coast, the festival’s activities were canceled. Still, Emily wasn’t surprised to hear Ryan announce he wanted to go fishing. “Nothing will keep him from going fishing,” she laughs. So, the unsuspecting Emily braved the wind and rain and headed for the beach with Ryan. The only other person on the beach was a photographer. When they arrived, Ryan began digging around in his tackle box, pulled out a diamond ring and proposed, which of course was captured by the photographer. Meanwhile, Emily’s parents, Lynn and Bryan Gerlach, were anxiously awaiting their return. “We knew Ryan was planning to propose,” Lynn says. 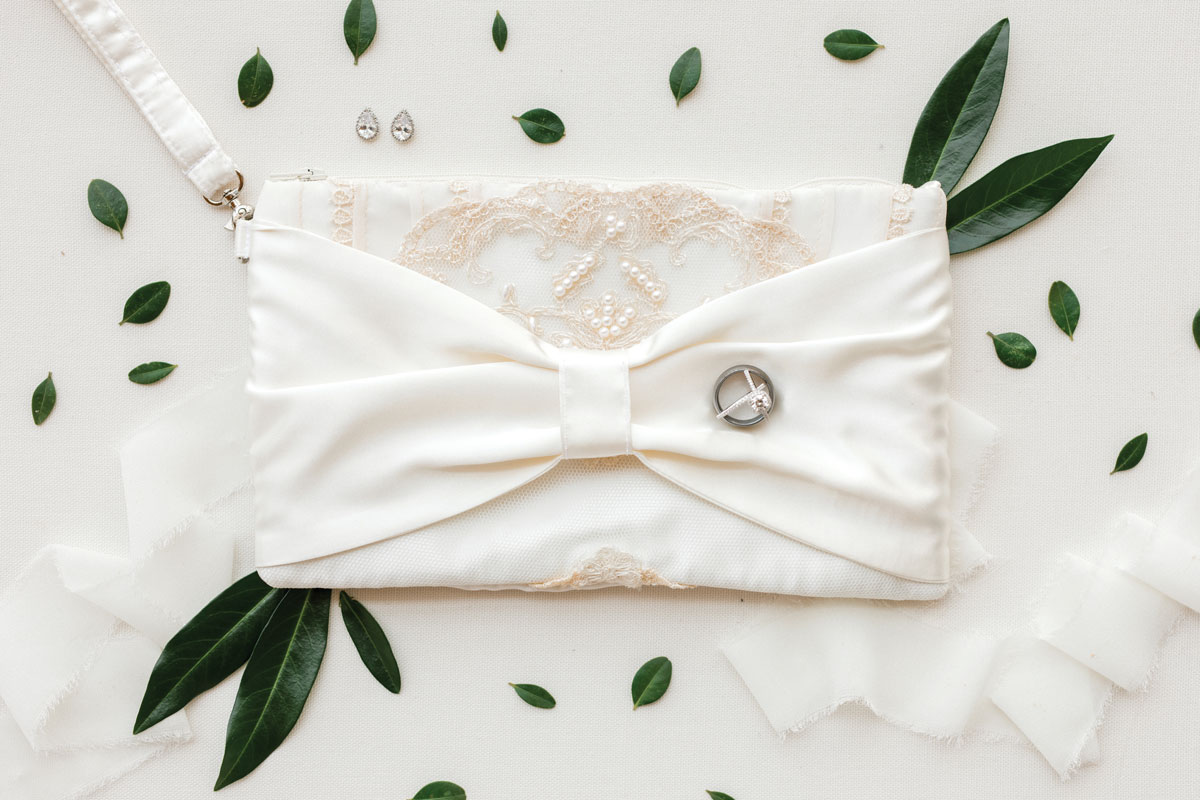 Something borrowed, something new: The bag Emily carried on her wedding day was made from her mother’s wedding gown.

Emily and Ryan wanted their wedding to be personal and fun. After visiting several venues, they agreed on The Barn at Silverstone in East Lampeter Township. The property’s Hay Barn would provide a perfect setting for the ceremony, while the beautifully restored Barn Hall could host the reception. “And, there were sheep!” Emily says. “How many people get to have sheep in the background for their pictures?”

As for the personal element, Emily’s father performed the ceremony, while the 100 guests included a few of Ryan’s Army buddies. 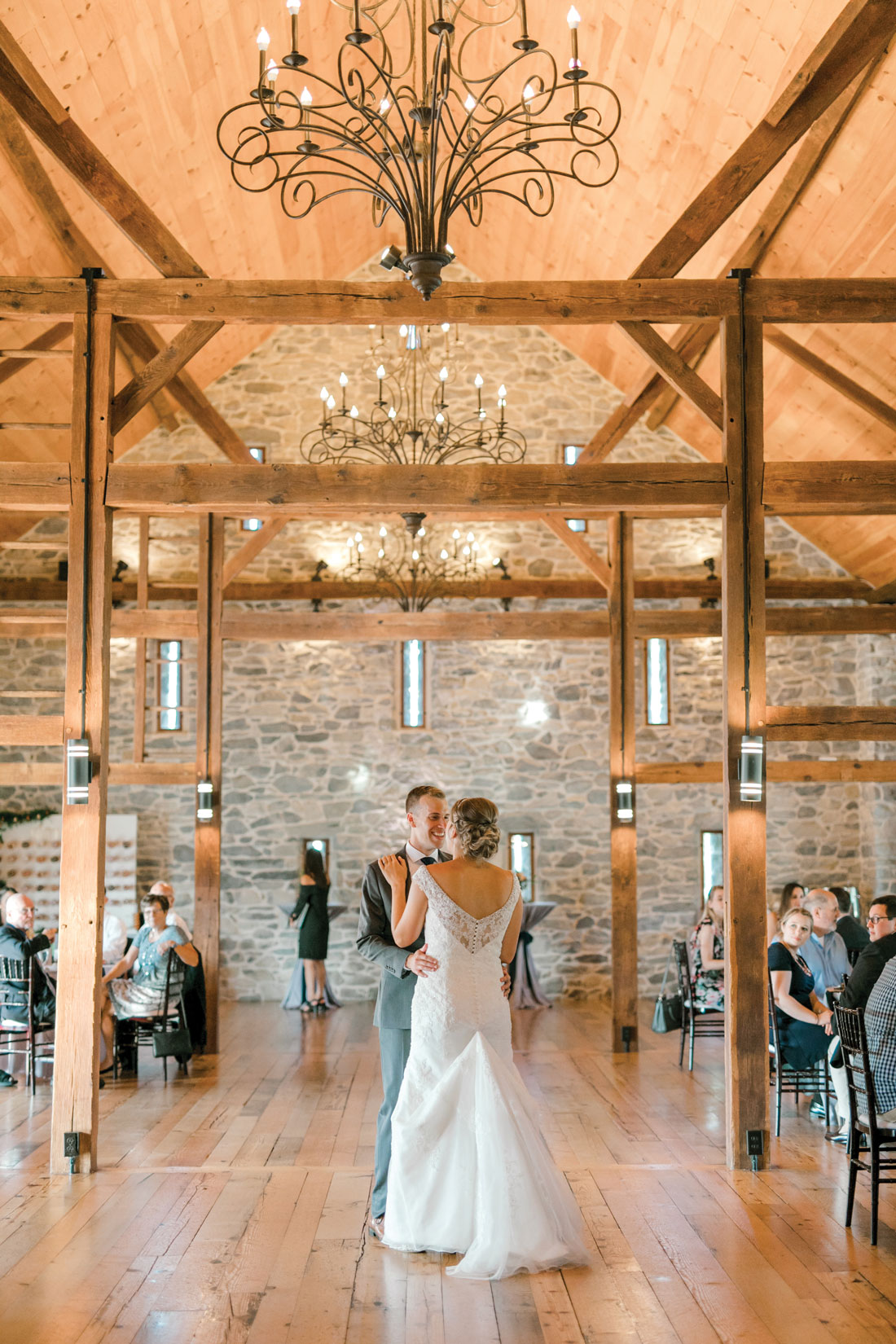 Barn Hall provided ample space for a seated dinner for 100, plus room for dancing.

The fun elements included a doughnut wall and cake, lots of Hershey chocolate candies and cornhole. The doughnuts were from Duck Donuts. “That was a fun tasting,” Emily says of the selection process she and Ryan enjoyed at the Fruitville Pike store. “We chose five kinds, and they delivered them on the day of the wedding.” 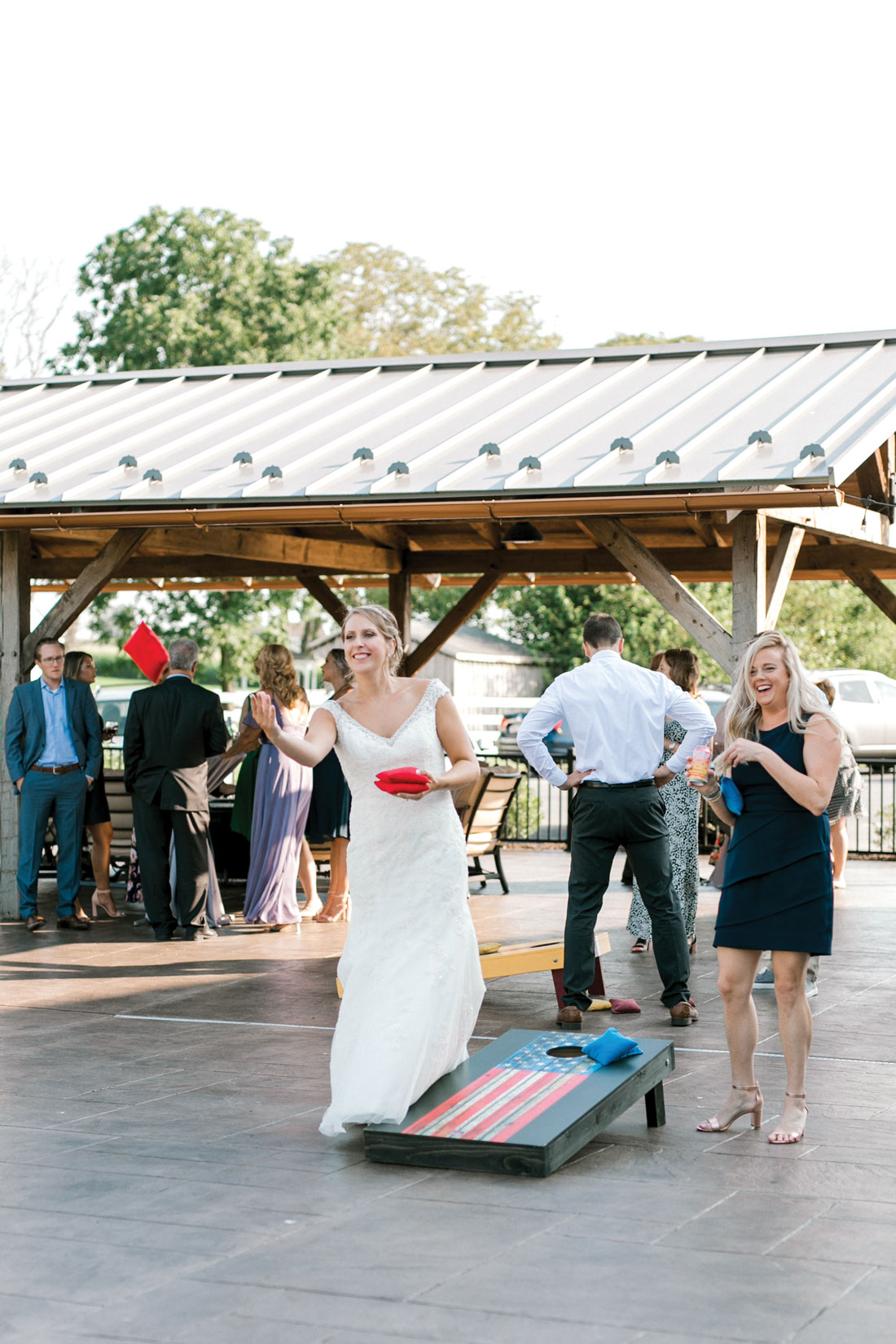 So that everyone could enjoy the day, Emily added a day-of coordinator – Kirsten Headland – to her list of vendors. “She was great; we didn’t have to worry about a thing and could just enjoy the day,” Emily says.

Emily learned of the organization Brides Across America (BAA) and did some research in hopes that a local bridal shop would be participating. Unfortunately, the participants for the November 11, 2018, Operation Wedding Gown event were located well out of the area. However, a shop in North Carolina – Poffie Girls in Gastonia – was on the list of participants. It just so happened Emily’s brother lives in nearby Charlotte. Road trip! 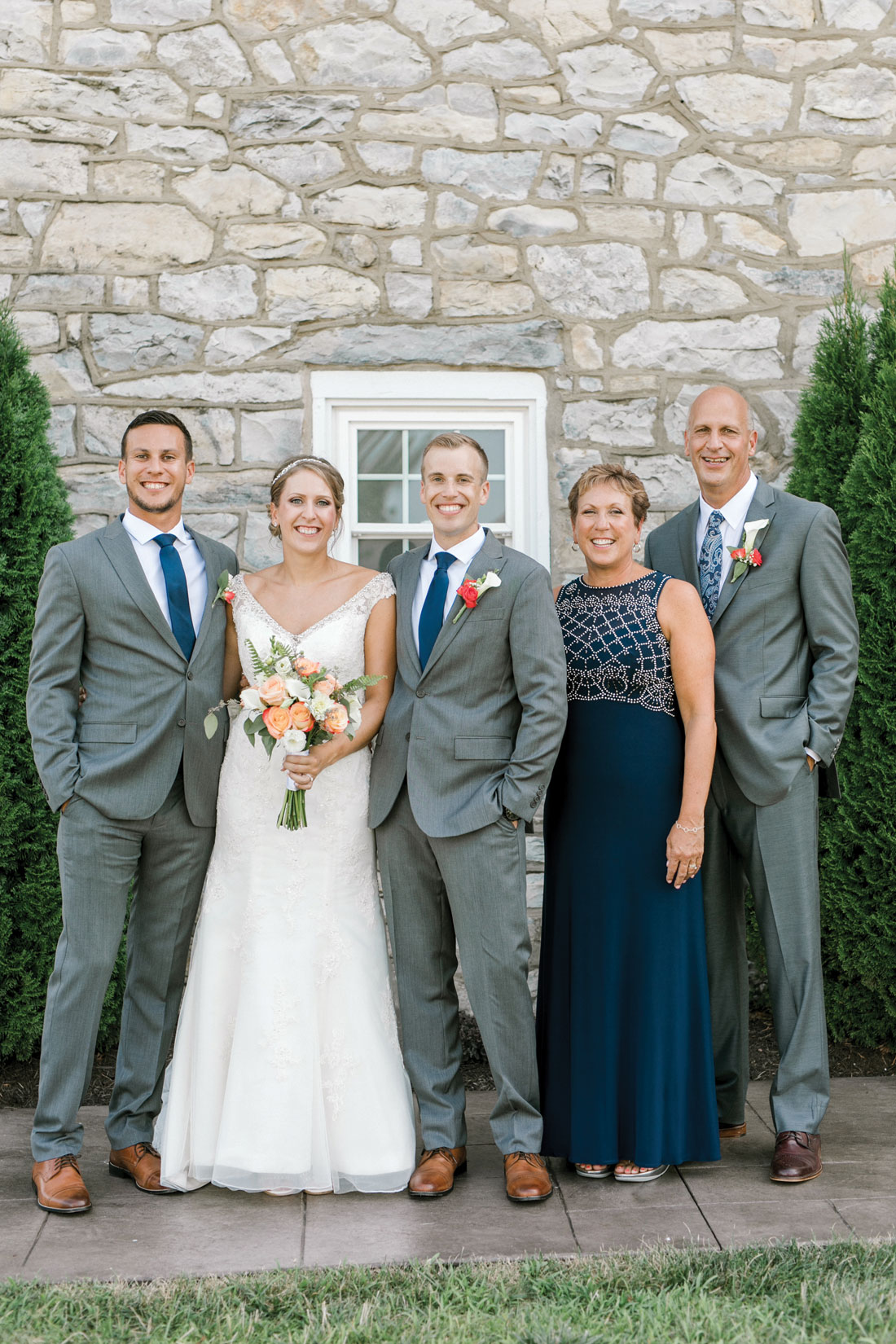 Emily and Ryan with her brother, Eric, and parents, Lynn and Bryan.

Brides Across America was founded by Heidi Janson in 2008. At the time, Janson, who had 20 years of experience in the industry and operated her own shop near Boston, was also working with an organization that helped impoverished women develop micro businesses.

In doing research, Janson read a story in which a deployed soldier questioned whether people on the homefront were appreciative of the work that was being done by military men and women in Afghanistan and Iraq. 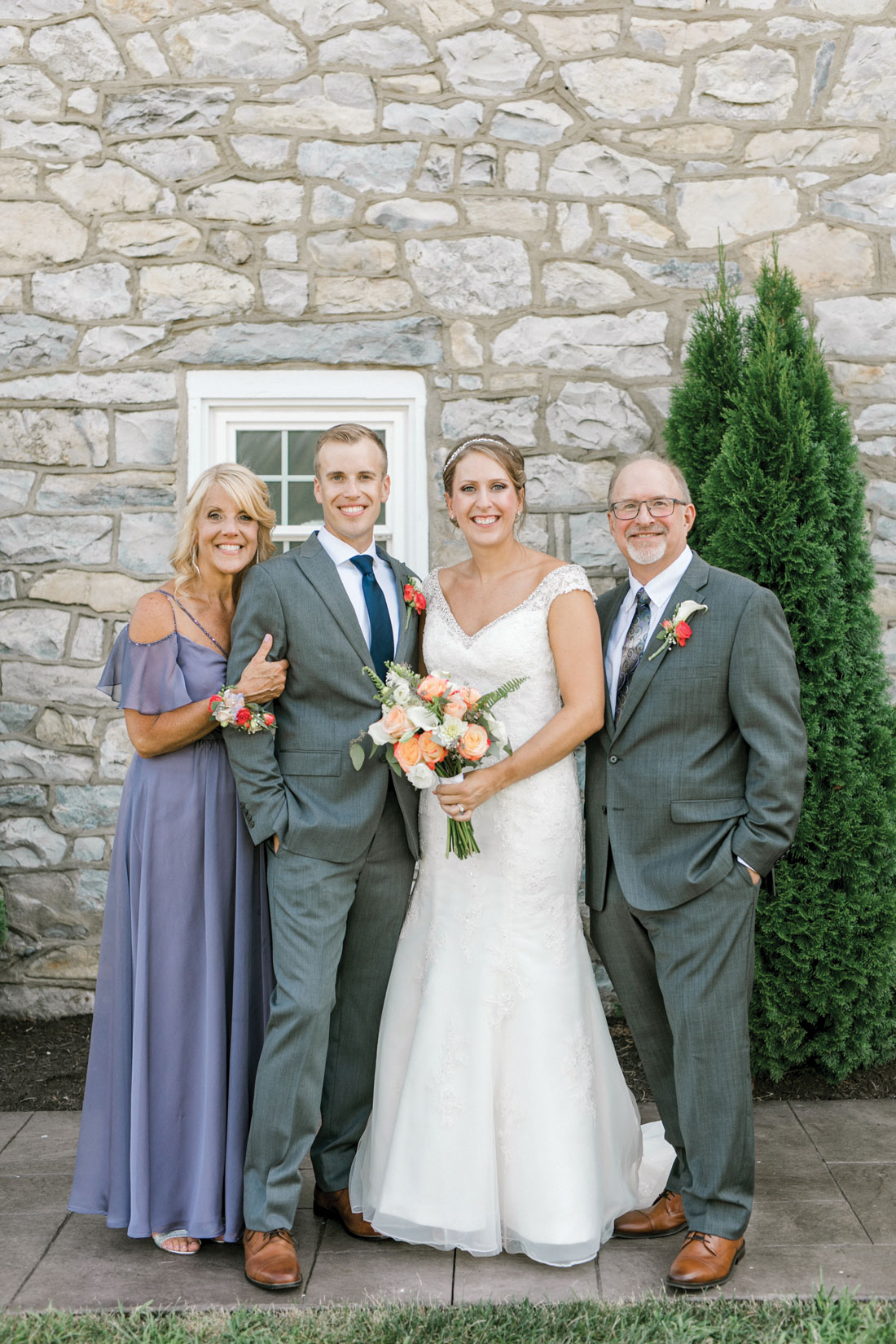 Ryan and Emily with his parents, Penny and Jeff Trees.

The story resonated with Janson, and she announced her bridal shop would be giving away wedding gowns to military brides over a two-day period in July, explaining that she was aware that for many military personnel a dream wedding is just that – a dream. She felt it was her civic duty to lend a helping hand. Through giving away 60 gowns, Janson received media attention from across the nation. Brides Across America grew out of the giveaway.

Since then, the endeavor has grown to include shops across America. Some regularly participate, while others do so occasionally. The gowns are donated by the shop owners, as well as designers and even former brides who wish to see their gowns bring happiness to other women. In addition to the gowns, veils, headpieces, accessories and more are donated. BAA also operates a store in Andover, Massachusetts.

Operation Wedding Gown events are held twice a year, in July (to honor Independence Day) and November (to coincide with Veteran’s Day). Over the past 10 years, more than 24,000 gowns have been gifted to members of the military or their fiancées. Veterans are also eligible. In 2016, the program expanded to include the community of first responders. BAA has also grown to provide military/first responder couples with entire weddings. Janson now views BAA as her “life’s work.”

While Emily traveled to North Carolina for her gown, she was excited to learn that a local shop, Tiffany’s Bridal Boutique, which is located in Stevens, participated in November 2019’s Operation Wedding Gown event. For details and eligibility requirements, visit bridesacrossamerica.com. 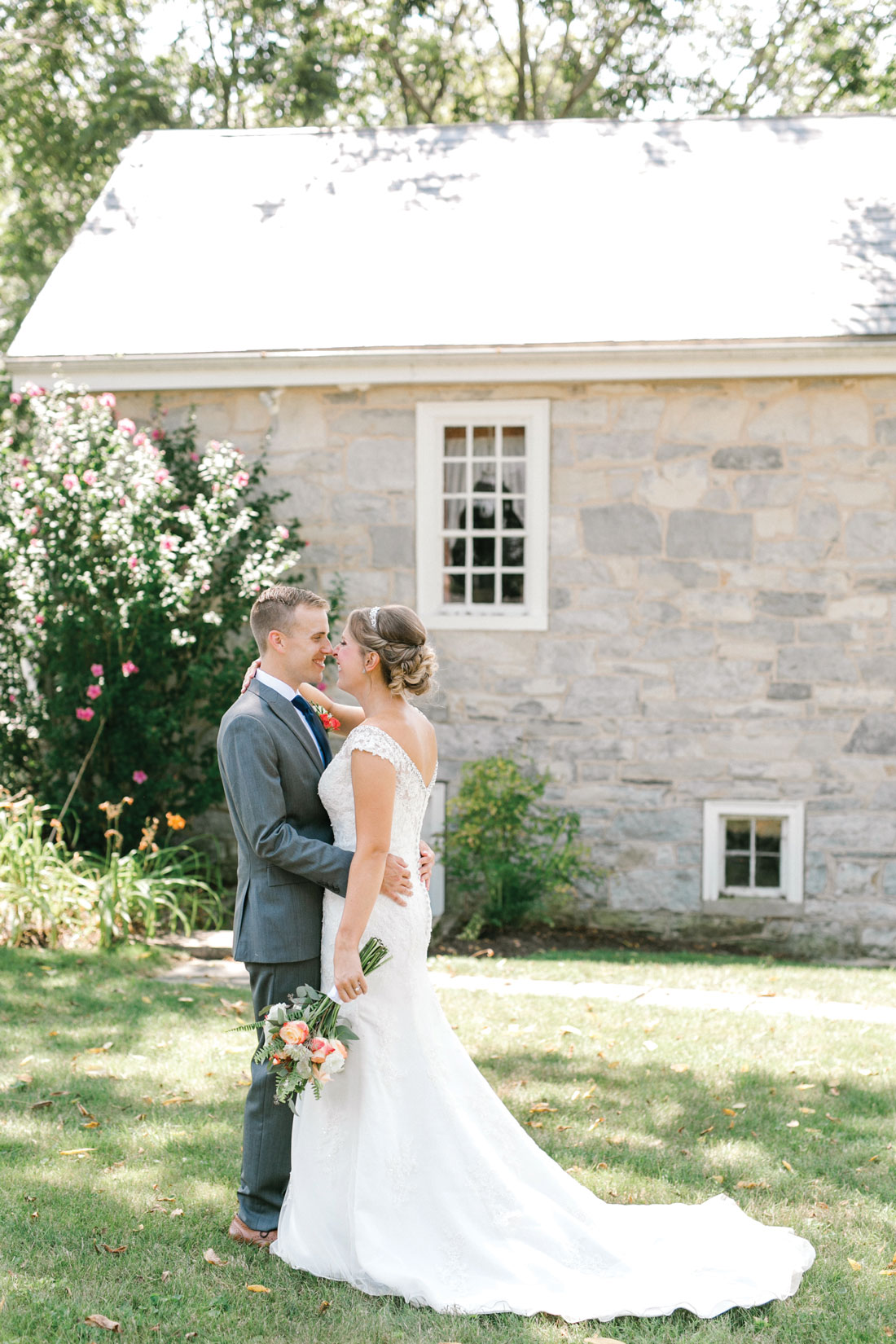 Emily registered for the November 2018 event and headed south with Ryan, her parents and Ryan’s mother and sister. While the girls visited the bridal salon at the appointed hour, the guys teed off at a local golf course.

“They made quite an event out of it,” Emily says of the reception she and the other 17 brides received at Poffie’s. “There was a DJ, food, and we all were interviewed on camera,” she recalls. “It turned out that I traveled the farthest. Then, we were ushered – three to four at a time – into a room that was filled with gowns.”

Just as on the television show, Say Yes to the Dress, Emily became nervous when nothing piqued her interest. “I had an idea of what I wanted, but I wasn’t seeing it,” she explains. 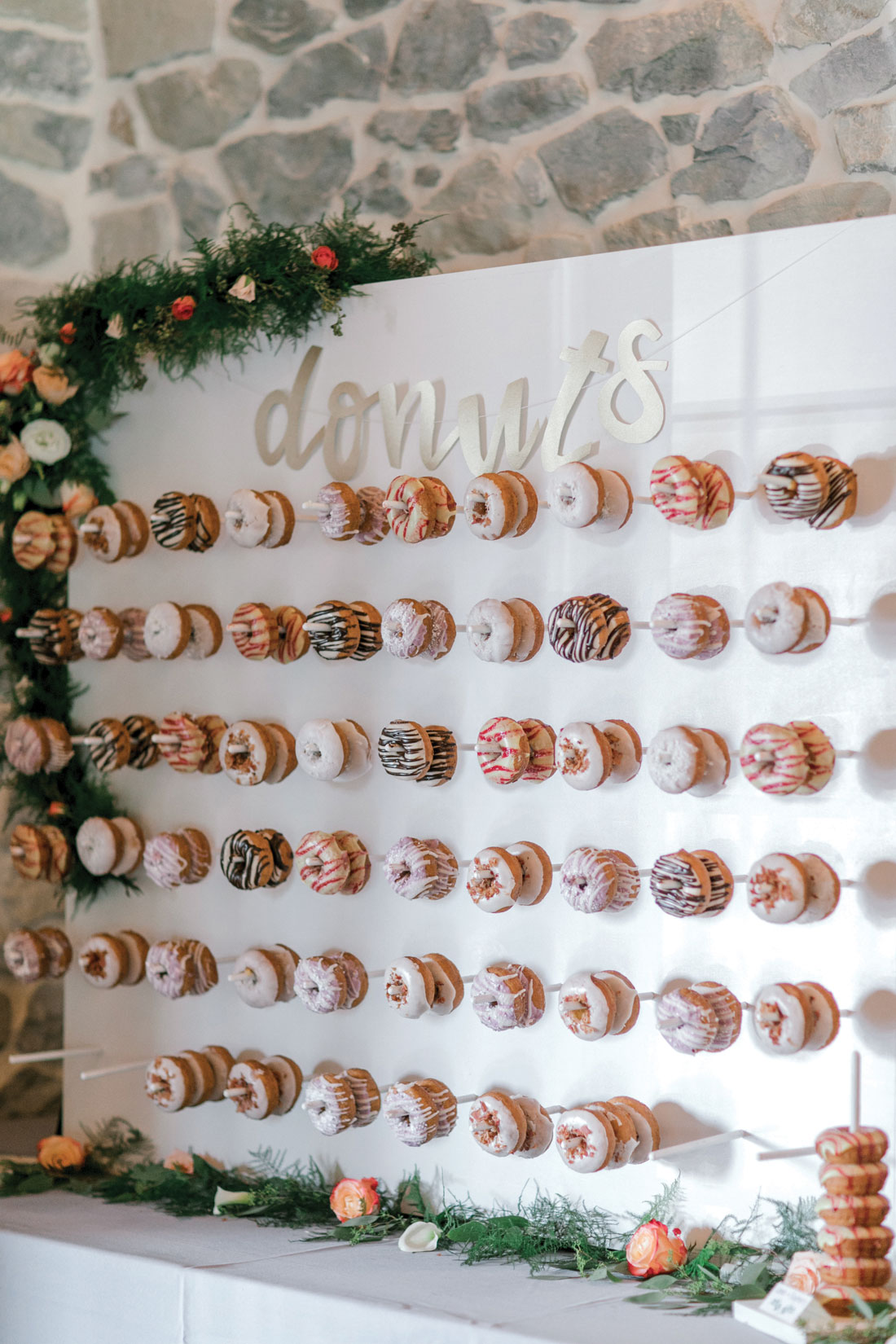 Then, a shop employee came to her rescue. “She had moved to Charlotte from Manheim Township!” Emily explains. The woman listened to Emily’s description of her dream dress and just like on Say Yes to the Dress, she set off and went shopping. She returned with the perfect candidate, but there was a problem – the dress was several sizes too large and would drown her.

Figuring she had nothing to lose, she tried it on and the magic indicator – tears – confirmed Emily was destined to wear the dress for her wedding. The team conferred and upon being assured that alterations would be easily doable, Emily left with her dress. 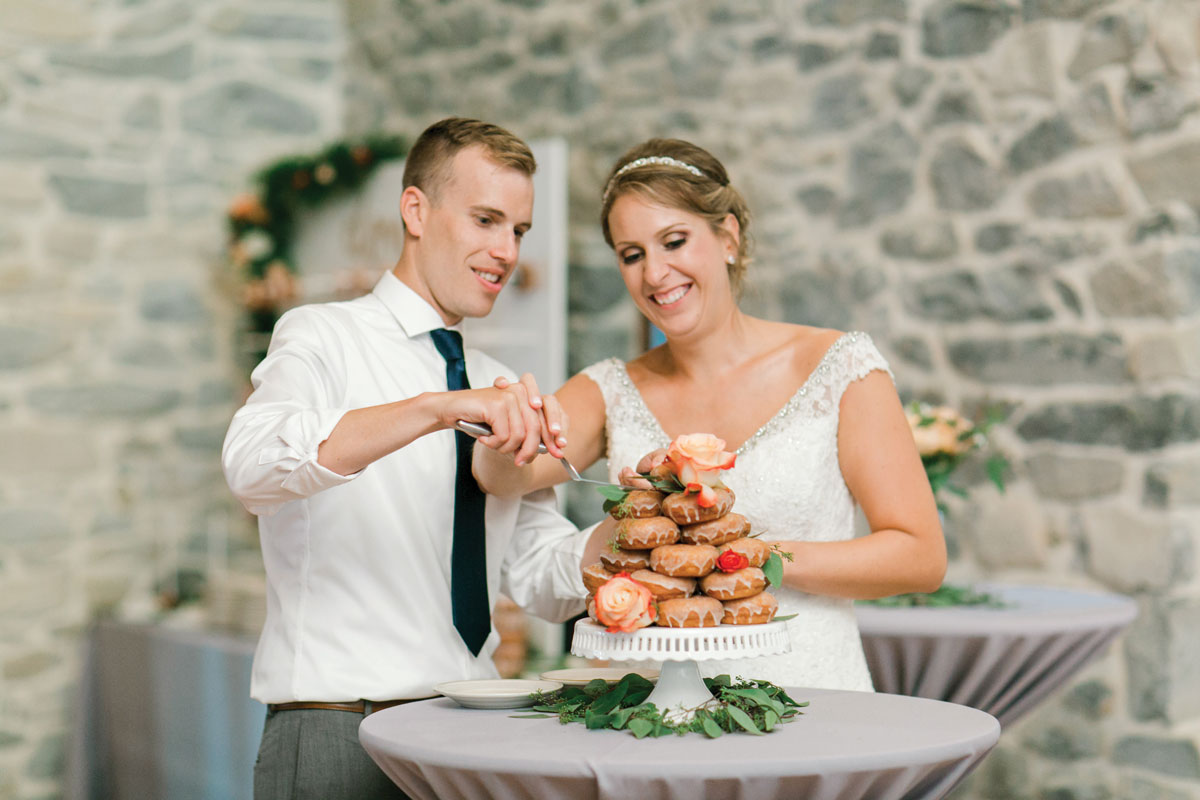 Instead of a traditional cake, the newlyweds cut into a cake-shaped array of doughnuts.

Once back in Lancaster, Emily began the search for someone who could alter the dress. At the suggestion of a friend, she called Country Threads by Gail, whose staff expertly altered the dress. “Several fittings, and it was done,” Emily recalls. “They did a wonderful job.” Lynn also discovered her dress at Country Threads by Gail. “It was perfect – just what I was looking for!” she says.

Oh, and Ryan did end up in Italy – he and Emily honeymooned there, where they divided their time among beach destinations, wineries and the sights in Rome.
Meanwhile, back in Lancaster, Kissel Hill Elementary had to alter its staff directory to account for two Mrs. Treeses. 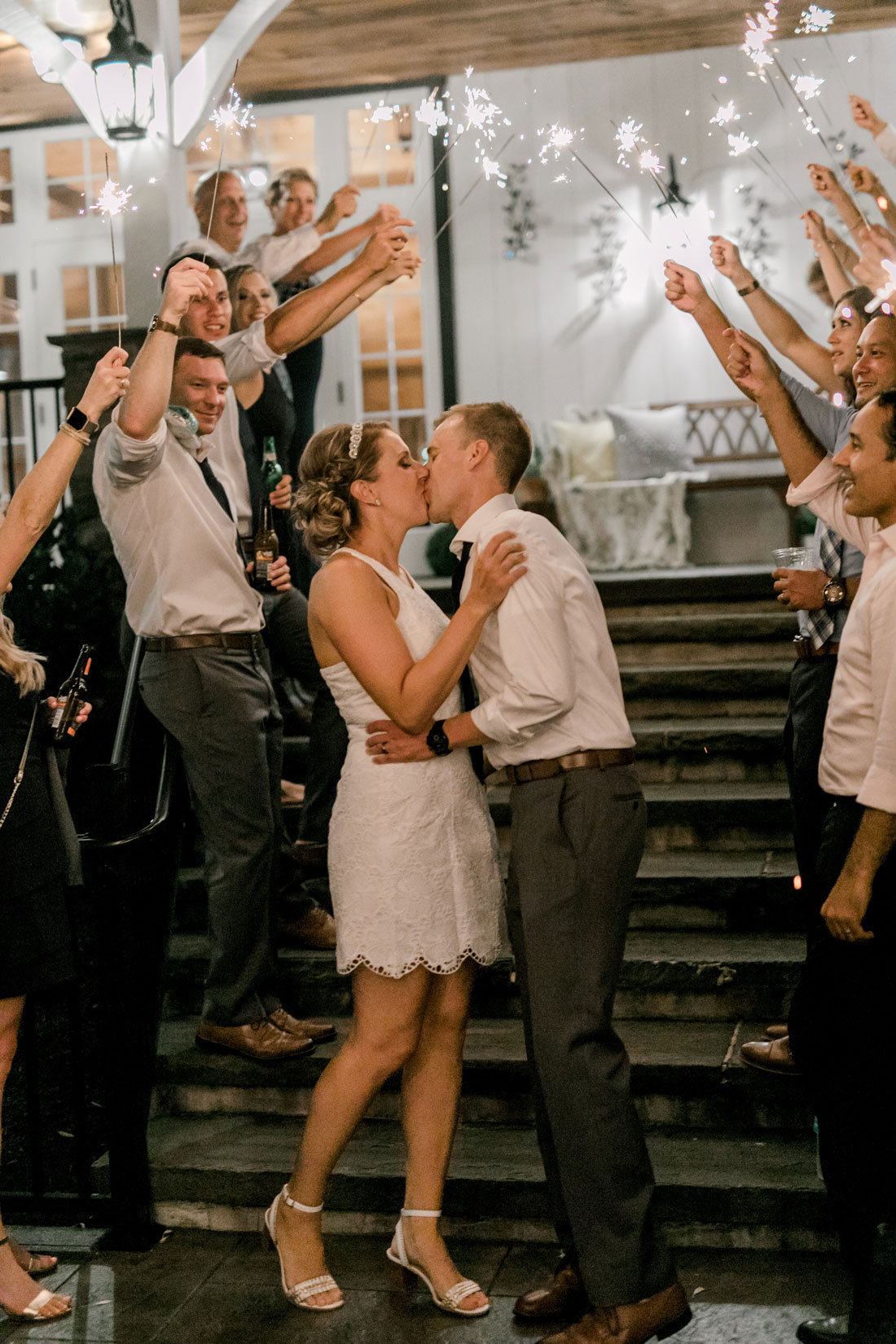 Mother of the Bride Gown:
Country Threads by Gail

Venue:
The Barn at Silverstone

DJ: Bring on the Bash

The attendants' dresses and the bouquets echoed the navy, coral, gray and green color scheme.