Not long ago, a friend who gardens on a small urban plot was lamenting to me that her garden is almost too soothing. While she cherishes the easy blending of the pastel colors she’s cultivated for years, she’s determined to add some “punch” to her borders in 2016.

Recognizing she’s obviously thinking along the lines of color and not texture, my immediate suggestion was orange. Yes, orange is advancing, earthy, hot, often irrepressible and bold, but it’s capable of delicacy, too.

“Oh, but marigolds are just too common” she responded dismissively. I pointed out that orange is found in more than marigolds and is super as an accent color floating above border plantings, weaving throughout its neighbors, or perhaps filling in cracks on a stony slope. Then, remembering her museum membership, I hastily pointed out that orange is a van Gogh color. After all, he once wrote, “There is no blue … without orange.” Furthermore, he had orange hair!

Indeed orange flowers will add sizzle and visual excitement to the border, especially in combination with blue and purple. Remember that color wheel from art class: complementary colors. 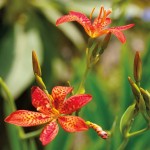 BLACKBERRY LILY(I’ve always known it as Belamcanda  chinensis, but it’s now listed as Iris domestica) is an ideal orange accent for high summer. Its flowers give way to seed pods that split open into blackberry-like seed clusters, which make a nice addition to dried arrangements. While it has 2-3 feet-tall flat fans of iris-like foliage, this Asian native’s perky orange, red-dotted flowers float even higher on sturdy stems. In my garden, it self-seeds and spreads slowly by rhizomes. It prefers full sun and must have good winter drainage. 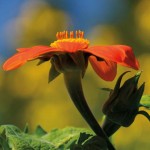 My own favorite late-summer annual with orange flowers is Tithonia rotundiflolia, often called the MEXICAN SUNFLOWER. It’s seldom available in nurseries, but fortunately it’s easy to grow from seed. It grows 5-6 feet tall and half as wide when it is given good drainage and a hot growing season. The fuzzy, dark-green foliage is a bit coarse, but the large (3-inch) daisy-like flowers are a brilliant red-orange in color. It is possible that in all of nature it displays the deepest orange. Mexican sunflower is one of the best flowers I’ve grown for attracting butterflies; they actually seem to compete for landing rights. For smaller gardens, a beautiful cultivar ‘Torch’ is only 3 feet tall. 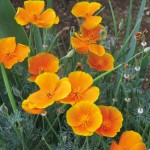 For the front of the border, along a path or nicely tucked in a rocky slope, the native CALIFORNIA POPPY, Eschscholzia californica, is a gem that will win the hearts of even those who disdain orange. It is easily grown as a short-lived perennial or self-seeding annual in sandy, poor-to-average soil in full sun. Like other poppies, it must have sharp drainage. The mounding blue-green foliage is fern-like. The lovely four-petaled flowers are mostly bright orange, but yellow-orange hues can be found. Plant it where it can freely reseed (that means no mulching!). 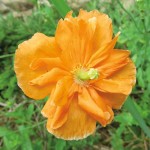 Another poppy that self-seeds in my garden is Papaver atlanticum. Commonly known as MOROCCAN POPPY, its basal clumps of grey-green foliage send up wiry 12-inch stems with crepe-papery orange blossoms that last a day. This poppy blooms continuously into fall for me when I remember to dead-head the spent flowers. It insists on good drainage and is very drought-and-heat tolerant. 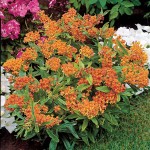 A local native with showy orange flowers is the trouble-free BUTTERFLY WEED, Asclepias tuberosa. Empathically it’s not a weed, but a butterfly magnet that flowers all summer in full sun and dry, shallow, rocky soil. Be sure to remember where it is planted because the new growth emerges very late in spring, and you’ll likely think you lost it. It should be left undisturbed due to its deep taproot. We should all be giving this milkweed a place in our borders because the leaves are a food source for monarch butterfly caterpillars. 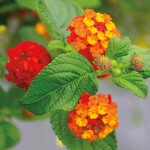 LANTANA (Lantana camara) is an easily grown annual that is available in orange (it often mixes with multiple colors in the same flower). Flowering from June to frost, it tolerates hot, humid conditions, drought and poor soil. To ensure a nicely shaped mounding plant, cut back the first flowers. Butterflies will flock to it. Lantana has been reported as invasive in areas with warm winters. 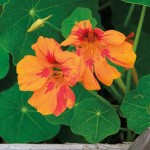 Another trouble-free species that tolerates poor dry soil is NASTURTIUM, Tropaeolum  majus, which blooms all summer in red, orange, yellow or cream in full sun. The flowers have a spicy fragrance. There are both trailing and bushy types with many cultivar series available. The mounding types are popular for edging in borders, while the trailing type works very well in containers and hanging baskets. Nasturtiums are appropriate for adding color to herb and vegetable gardens because all parts, except the roots, are edible and add a peppery flavor to salads. 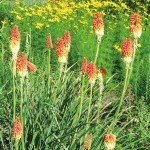 For an outstanding bold, vertical accent from late July into September, nothing attracts attention like the so-called RED-HOT-POKER, Kniphofia. The bottlebrush-like flower spikes are available in shades of red, orange and yellow, with ‘Bressingham Comet’ being a good choice for orange seekers. Torch lily, another common name, well describes the showy flower spikes, which are broad at the top and taper to the base. The short-stalked tubular flowers typically bloom bottom to top. Another plant for full sun and good winter drainage, torch lilies should not be disturbed once planted. Supplemental watering during the summer months will ensure a longer bloom time. 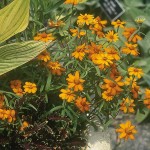 Common garden ZINNIAS (Zinnia elegans) come in many colors, including orange. But I’m not the only gardener who has reluctantly stopped planting them because of the powdery mildew and other foliar diseases they are subject to. Although it’s sometimes hard to find in retail centers, the native, creeping, narrow-leaf zinnia, Zinnia angustifolia, is a prize with its single, daisy-like, bright-orange flowers. It flowers profusely from June to frost in full sun, providing a showy, butterfly-attracting display. It is easily grown in humusy, evenly moist, well-drained soil. This species does not fade in summer (as is sometimes the case with the common zinnia), is resistant to fungal diseases and requires no deadheading. It is worth considering for containers. 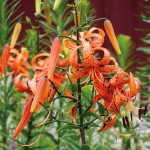 ASIATIC LILY (Lilium, various cvs.) bulbs give way to vivid-orange flowers in June and July. The non-fragrant flowers are on rigid stems rising 2-3 feet. Although considered one of the easiest lilies to grow – it makes for a great cut flower – certain cultural needs should be provided to ensure a dramatic display. It prefers rich, organic soil and is happiest if the upper plant is in full sun with the roots shaded. The soil should never dry out. It should be grouped for best display.

Plant Azania only if you don’t have rabbits. 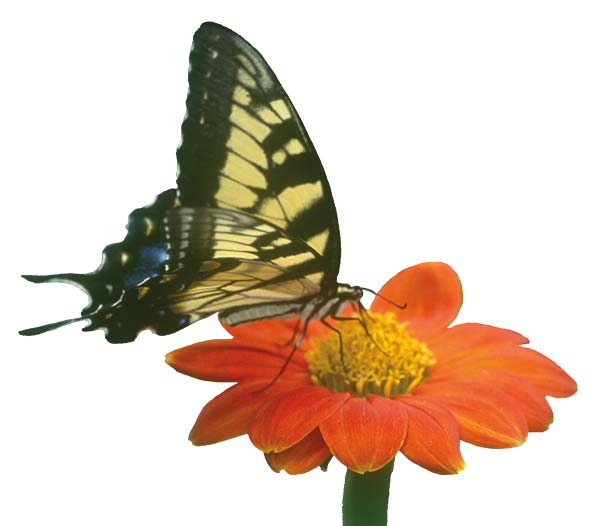