“If I could have one superpower, it would be the ability to communicate with animals,” says Pamela Campbell, who co-owns Spooky Nook Llama & Alpaca Farm, located near Landisville, with her fiancé, Michael Scornavacchi. “I’d love to know what they are thinking and have them tell me what hurts if they are not feeling well.” 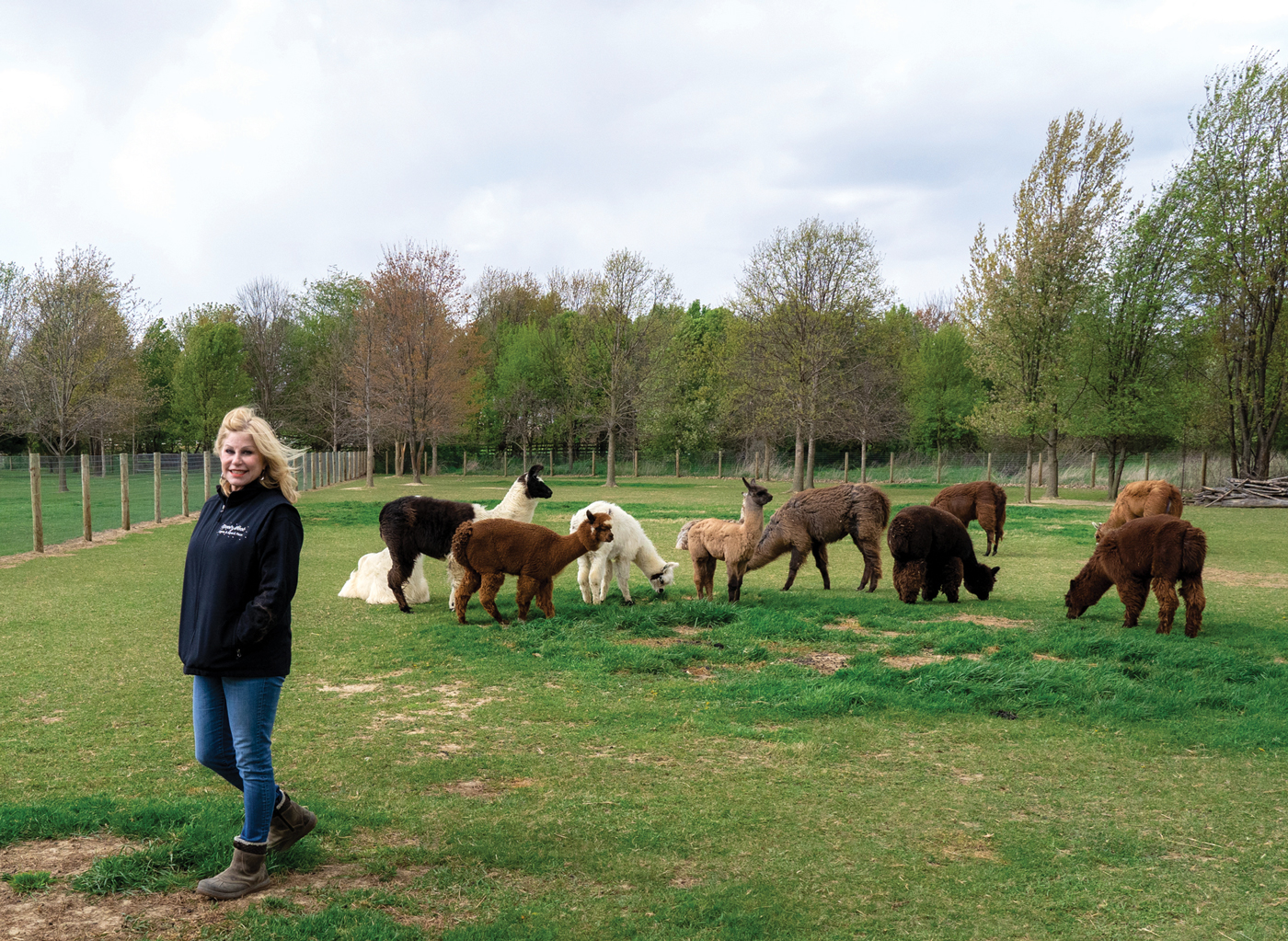 Pamela Campbell, who was the owner of a day spa on Marco Island in Florida, is now a Lancaster County farm girl who breeds and raises llamas, alpacas, sheep and horses.

Pamela is a firm believer that career paths do not have to follow a straight line. Instead, they should evolve and even deviate from where they began. She and Mike are prime examples of that philosophy. Born in Pittsburgh, the aesthetician and makeup artist resided in Michigan for 30 years before moving to Marco Island in Florida, where she owned and operated a day spa. Mike, who is originally from Reading and is the founder of the material-handling company, LIFT, Inc., always spent half the year in Florida.

The two became acquainted through attending the same church and being members of the same country club. One day, the recently divorced Mike texted Pamela and asked if she’d like to get a group of her friends together and go out for dinner. She agreed and in an effort to play matchmaker, recruited 11 of her girlfriends to go to dinner with Mike and her. “By the end of the evening, we were the only two left,” she recalls. They discovered their shared interests extended to being entrepreneurs and not having traditional viewpoints of what retirement looks like. “I think you can reinvent yourself at any age,” Pamela says. “As for myself, I couldn’t envision sitting around and playing Mahjong all day.”

Pamela and her fiancé, Michael Scornavacchi, relocated to Lancaster County six years ago and are the owners of two farms located just outside of Landisville. They’ve spent the last four years restoring the barn and farmhouse, both of which are more than 200 years old. Pamela’s daughter provided the artwork on the barn.

Motivated by the fact that Pamela’s mother had moved back to Pittsburgh, the two began looking for business opportunities in the Northeast. “Most people retire and move to Florida,” Pamela notes. “We did the opposite and came north!” Mike had previously bought the farm where they now live and leased out the fields. Two years ago, he purchased the adjacent farm. Together, the two farms cover 80 acres. Mike and Pamela’s farm is home to llamas, alpacas, sheep, horses and three dogs, two of which she describes as “foo-foo dogs who now think they are farm dogs!”

The couple has devoted the past four years to renovating the stone farmhouse that is more than 200 years old. They are nearing the completion of an addition that will hold the master suite. “The front yard has been dug up for the last four years and I’ll be so happy to see grass growing there again,” Pamela says. The barn, which predates the house, was fully renovated (the stonework was repointed throughout) and adapted to animal care. “We just want to be good stewards,” says Pamela. 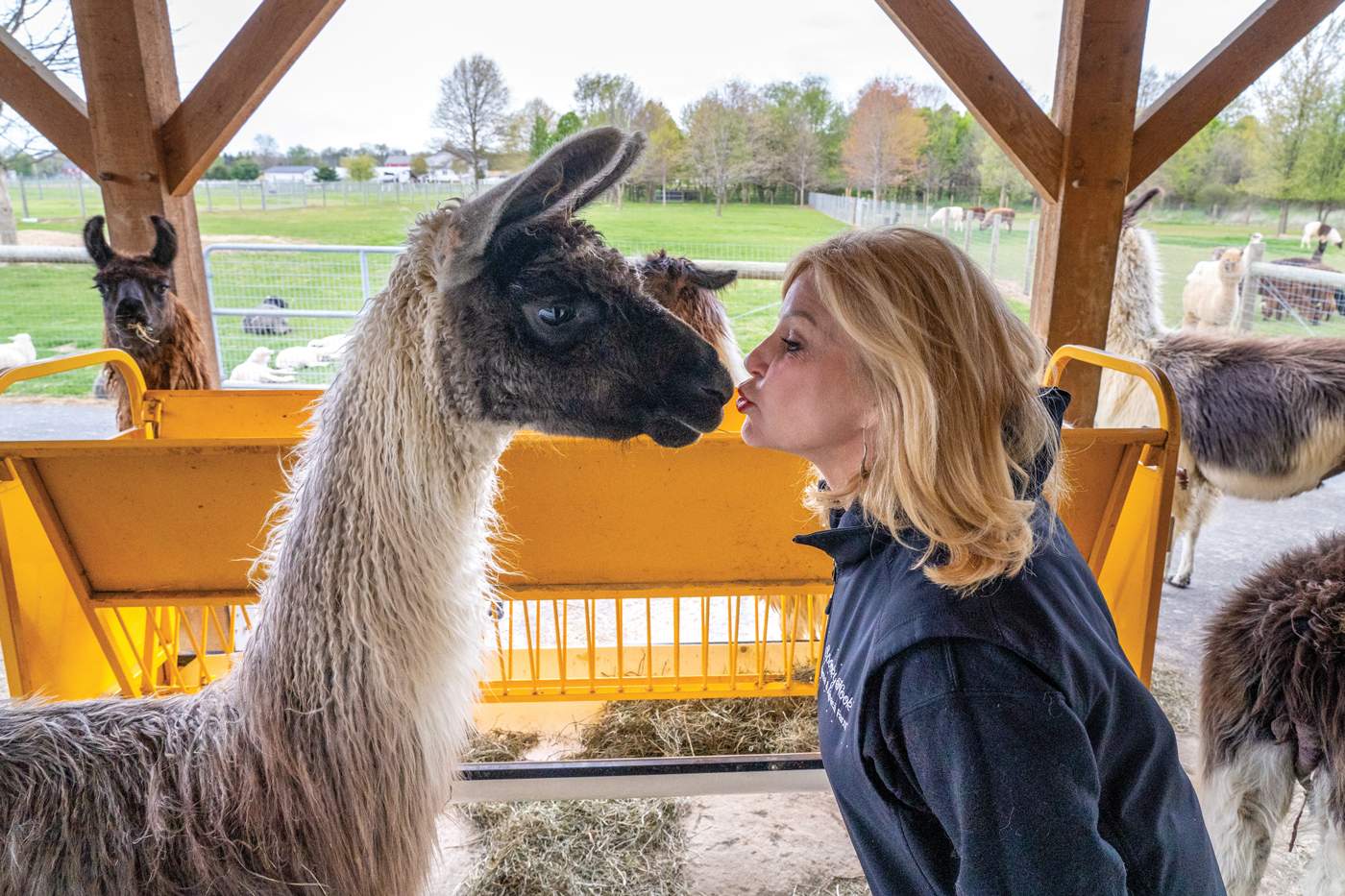 Livestock of a Different Sort

When it comes to livestock, Lancaster is known for its herds of dairy cows. There are plenty of sheep, as well. Yes, there are several llama/alpaca farms, too. “We knew nothing about llamas and alpacas,” says Pamela. Attending a community fair changed all that when they spied a llama. Pamela, a self-confessed animal lover since childhood, was intrigued and began doing research.

Llamas and alpacas have been used as pack animals in the mountains of South America since pre-Columbian times. (Pamela dreams of traveling to South America once Covid-related travel restrictions are eased in order to see llamas and alpacas in their natural environment.) They’ve since made their way to North America and have become familiar sights in the Rocky Mountain states, where they are used by hikers and campers to transport gear. “They do well here,” Pamela says of the United States. As for Lancaster County, Pamela reports, “The cold doesn’t bother them but they are not fond of hot weather.” When the weather turns hot and humid, Pamela’s herd likes to spend the warmest part of the day in the temperature-controlled barn. 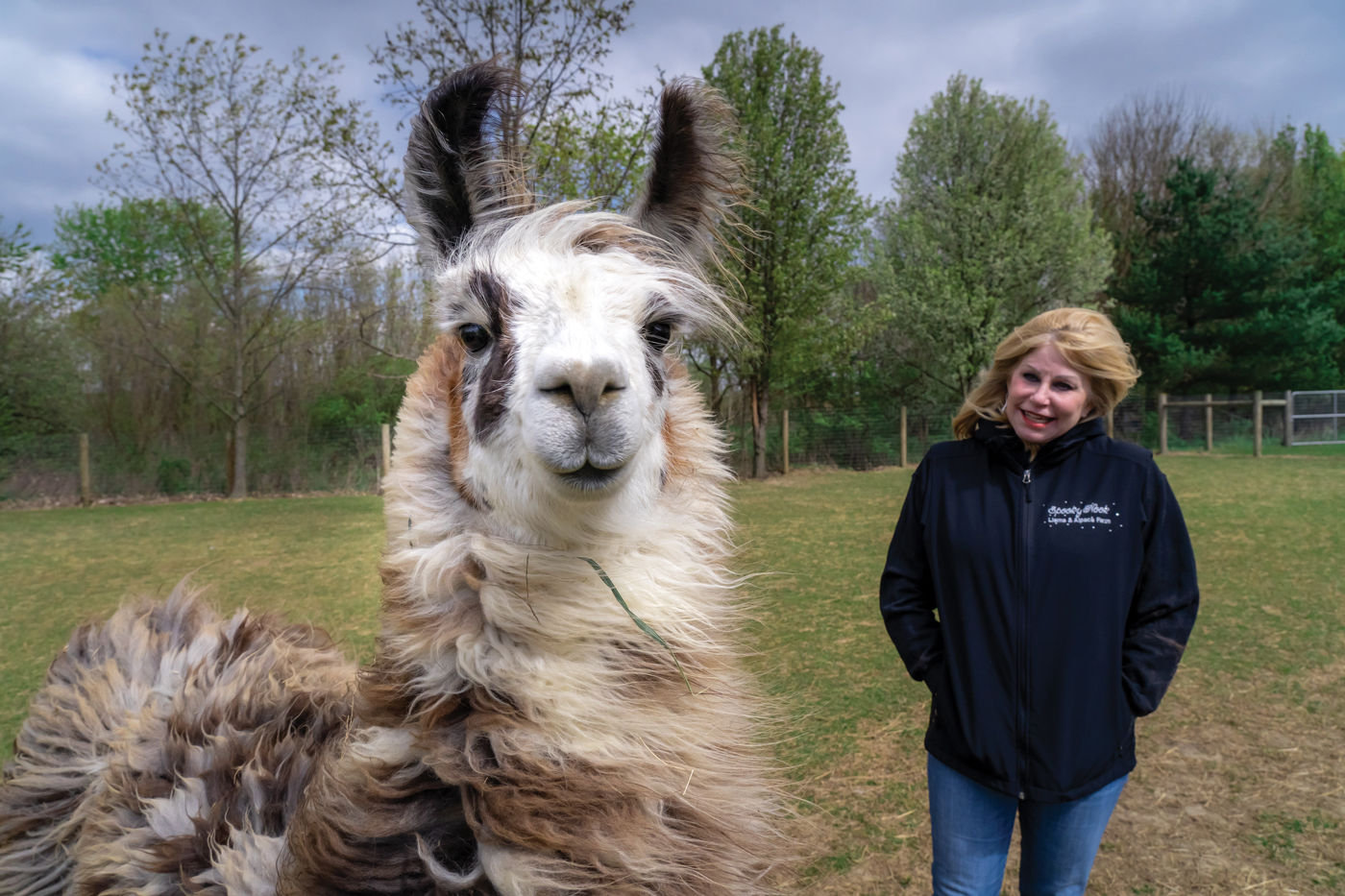 Llamas tend to be friendly and approachable.

Llamas and alpacas are also renowned for their fleece. Because it’s hollow, the fiber is lightweight yet incredibly warm. “That’s why it’s so expensive,” Pamela remarks. Another plus is that unlike sheep wool, it is lanolin-free.

As we discovered, llamas can be incredibly friendly and will readily approach you. Their expressive and long-lashed eyes are captivating. Alpacas, which are smaller and different from llamas in several ways, tend to be on the shy side. 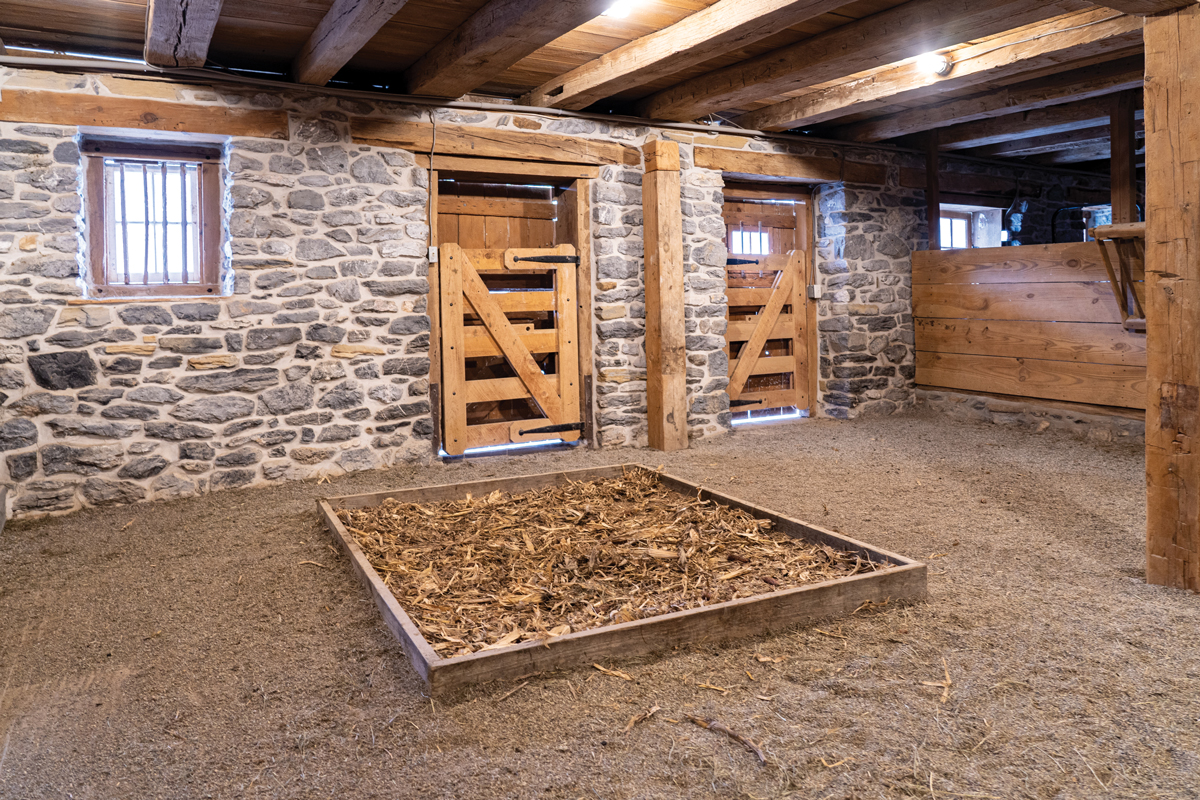 When given the opportunity, llamas will use a “litterbox” such as this one that was set up inside the barn.

Pamela and Mike did their homework and welcomed six alpacas to the farm. “They were not very friendly,” she recalls. In search of answers, she attended a GALA (Greater Appalachian Llamas and Alpacas) meeting that was held in Lancaster. “Everyone was so welcoming and helpful,” she says.

From there, they added two llamas, who hailed from Upstate New York. “That’s when I discovered llamas are like potato chips – you can’t stop with one,” she relates. Pamela became totally immersed and began attending seminars relating to all-things camelid, including breeding and birthing methodology. (A llama’s gestation period is 350 days. Their life expectancy averages 25 years.) “My goal in breeding is to achieve good dispositions, followed by composition and good fiber,” Pamela explains. “I have to work with them, so I’d prefer them to have nice temperaments.” Apparently, the feelings are mutual. Once the animals spy Pamela, they come running to greet her. It’s a sight to see and experience. 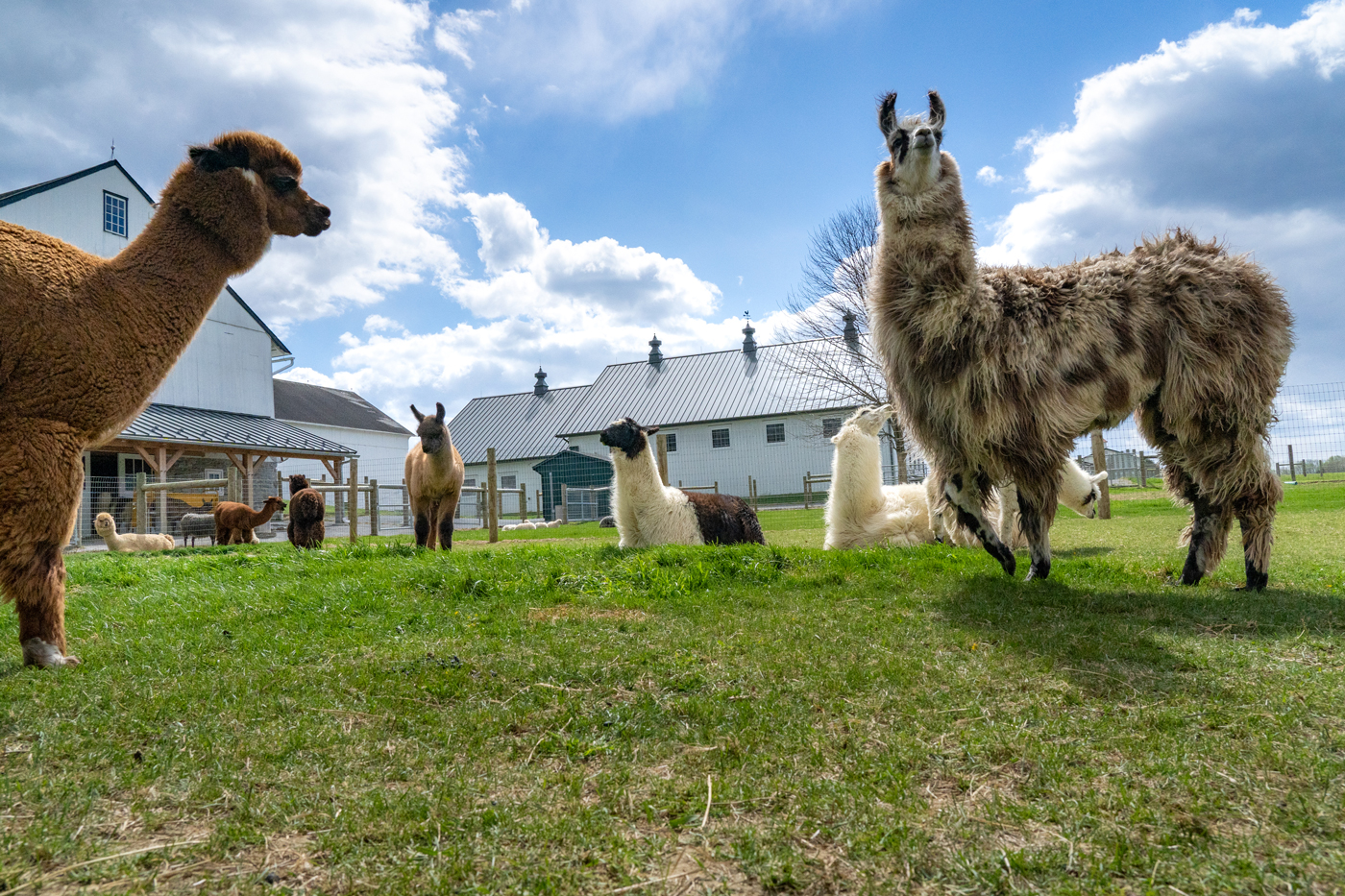 Pamela also gives kudos to Dr. Cynthia Foulke, a veterinarian with Ag Vet Associates in Lititz, for taking her under her wing. “I’ve learned so much from her,” Pamela says. She also credits Sue and Kevin Zurin at Eastland Alpacas in Mount Joy for their help and support.

Pamela has also immersed herself in competing on the show circuit. One of her llamas, Mr. GQ, has been winning titles from coast to coast. “He knows he’s beautiful,” she says of the self-confidence he displays during competitions. Their latest competition – nationals – took them to Indiana in late April. Pamela was very pleased with Spooky Nook’s showing. “There were over 400 llamas entered,” she notes. “In every class we entered, we were in the Top 5. One of my girls took first place in a class of 25 llamas. We were thrilled to place in every division!” 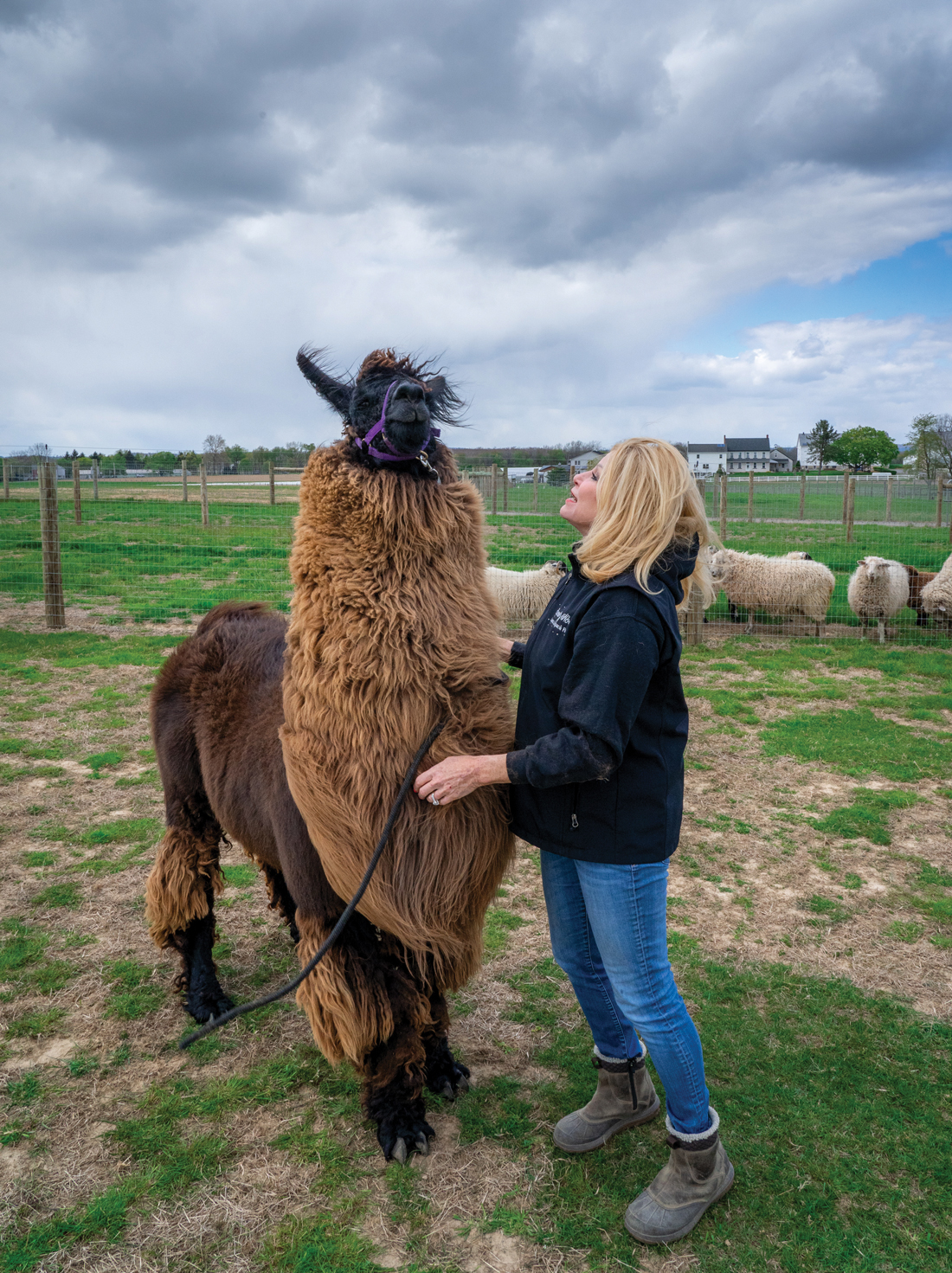 Pamela with her pride and joy – Mr. GQ, whose Argentinian bloodlines help to make him a winner on the show circuit.

Pamela also launched a llama club at the farm. “We have a core group of 10 to 15 people. We have educational meetings and they come out to walk and groom the llamas and alpacas and help with events. Everyone is assigned an animal. They’ve become a great asset to the farm.”

People on the front lines of the pandemic have also discovered the “magical powers” that llamas possess. “Walking a llama is very zen-like and therapeutic,” Pamela notes. “We’ve had quite a few first responders come to the farm to destress by taking part in our llama walks.” 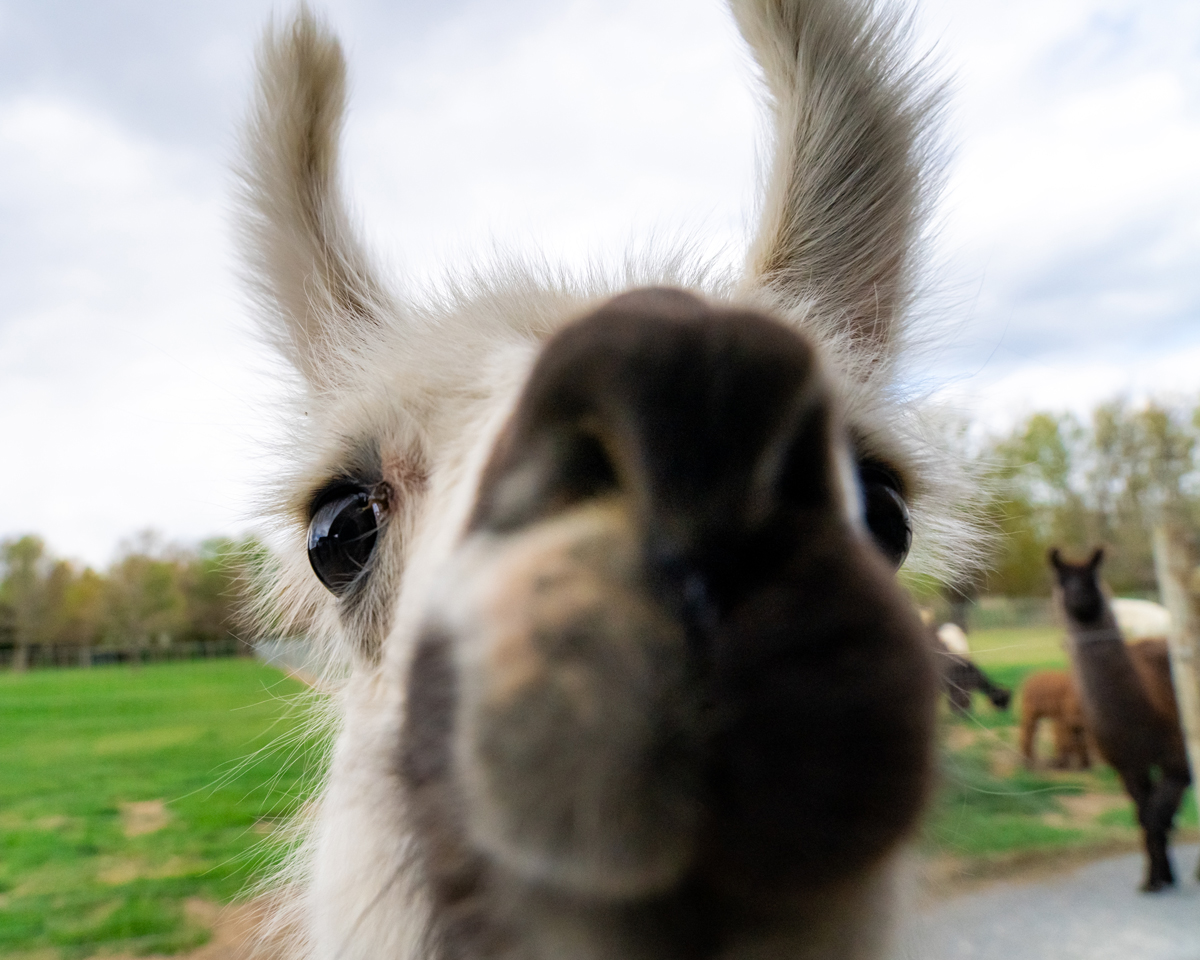 Now that the farm is part of the agri-tourism movement, Pamela and Mike have been welcoming visitors. “We get lots of homeschool groups,” she says. “Every tour is private – we don’t do group tours on the hour. We want the tours to be as personal and educational as possible.”

Because llamas and alpacas are susceptible to parasites, Pamela and Mike make it their mission to clean the fields on a daily basis. “We couldn’t do all this without each other,” she shares. 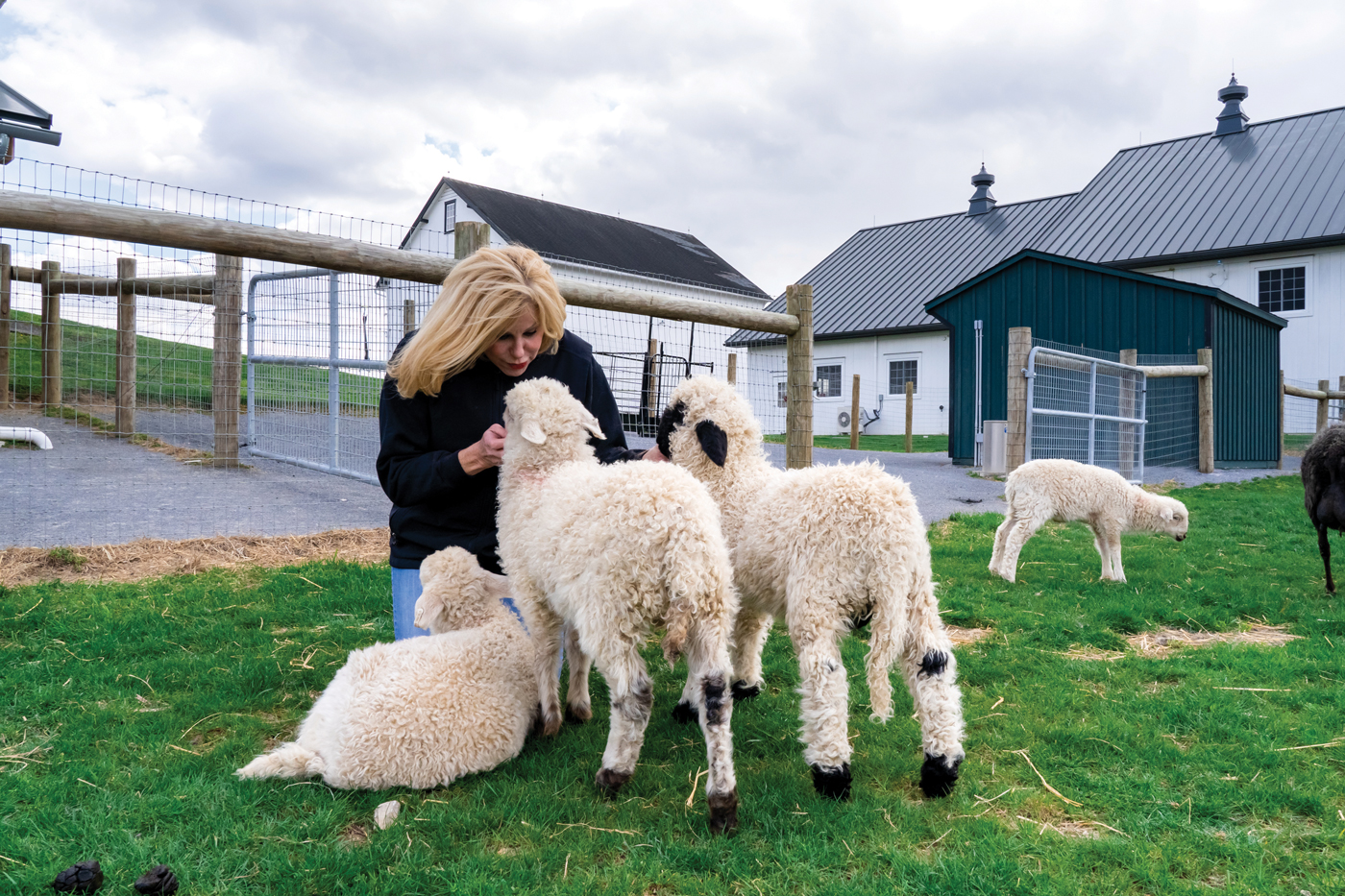 One day Pamela was online when she spied “the most amazing sheep.” What caught her attention are Valais Blacknose sheep from Switzerland. One website refers to them as “the cutest sheep in the world.” Distinguished by their black faces and ears, as well as knees, hocks and feet, their curly wool makes them almost look like labradoodle dogs. Pamela affirms they have dog-like behavior, as they love to be held and cuddled and will come running at the sight of a human. “They’ll just follow you around like a dog,” she adds. Today, they are primarily raised as pets. “People buy them because of their personalities but their fiber is amazing, too,” she reports, adding, “I’m really attached to them.” 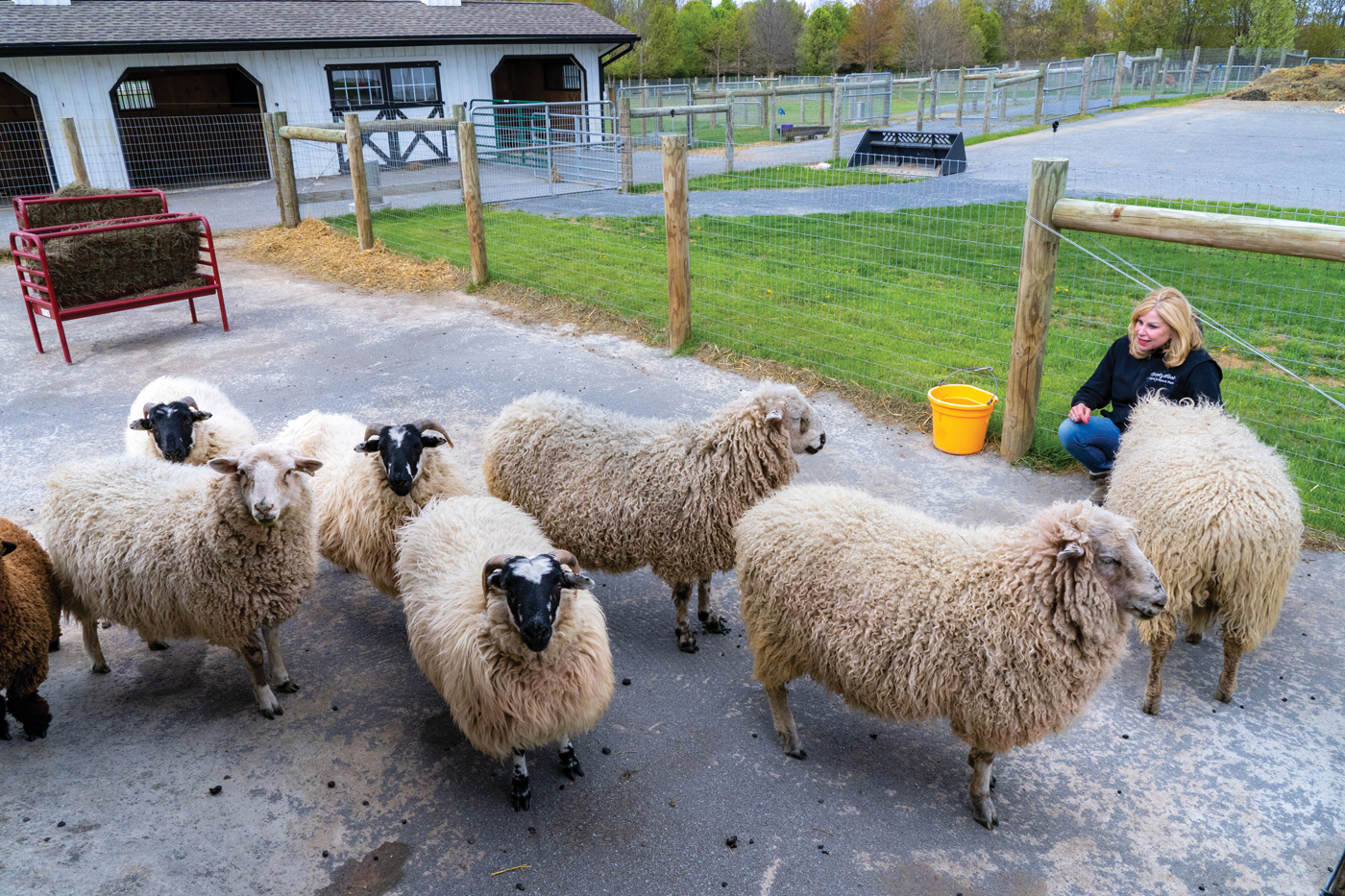 Unfortunately, because of predators, Valais Blacknose sheep have become an endangered breed in Switzerland. Breeding programs are being carried out in New Zealand and the United Kingdom. A breeding program has also been launched in the United States, which first depended upon sperm for reproduction but is now reliant on embryos. Spooky Nook is the first farm in Pennsylvania – as well as one of the first in the country – to successfully develop Valais Blacknose sheep.

“It takes four generations to arrive at a purebred,” Pamela explains. She takes pride in the fact that Spooky Nook now has two purebreds. The lambing season, which stretches from December through March, is one of trial, tribulation and sleepless nights. Pamela and Mike have the barn outfitted with cameras so they can follow the birthing process from inside the house. If a mother is in need of help, they go to the barn and lend a hand. “One time we had a lamb in trouble and had to bottle-feed it. It ended up living in the house,” Pamela recalls. “You do what you gotta do!” 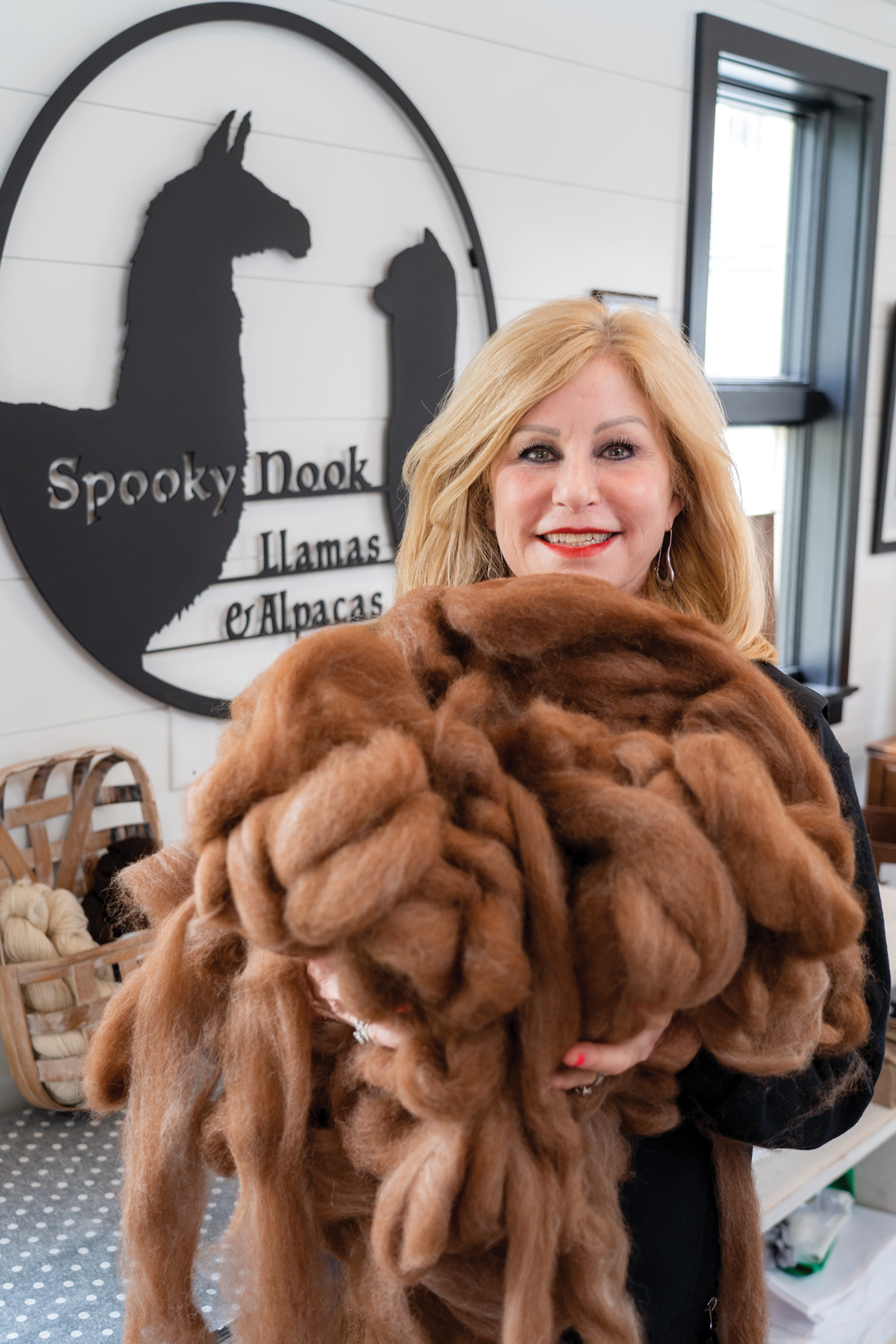 While the fleece from llamas looks heavy, it’s light as a feather.

In 2020, Pamela took advantage of a small outbuilding on the farm and opened Pamela’s She Shed. It is stocked with an assortment of all-things llama and alpaca, ranging from doormats and throw pillows to jewelry and yarn. She also shops the gift shows and purchases art, clothing and fun things such as message blocks inscribed with sayings such as “If Target had a bar, it would be perfect!” Classes (such as felting) are held. “I’m trying to find someone to lead a knitting class,” she says. 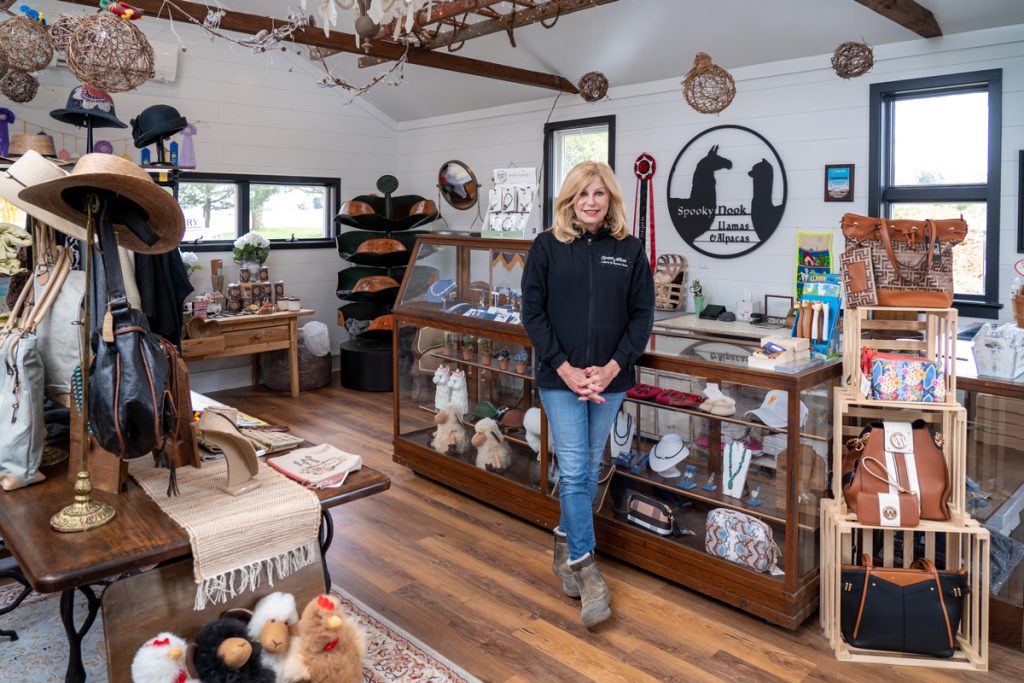 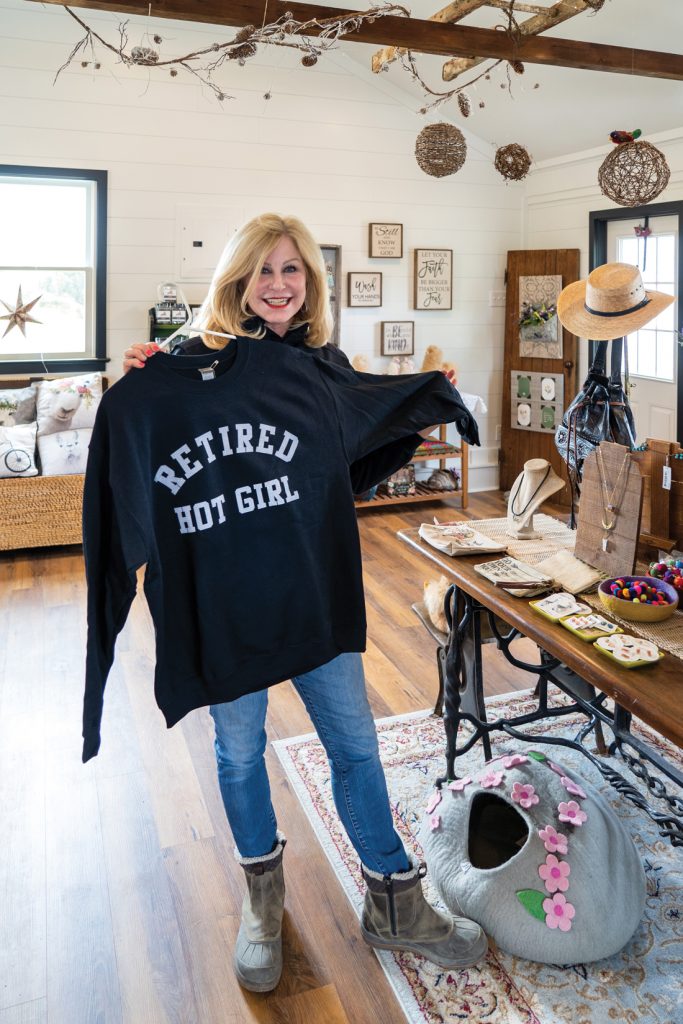 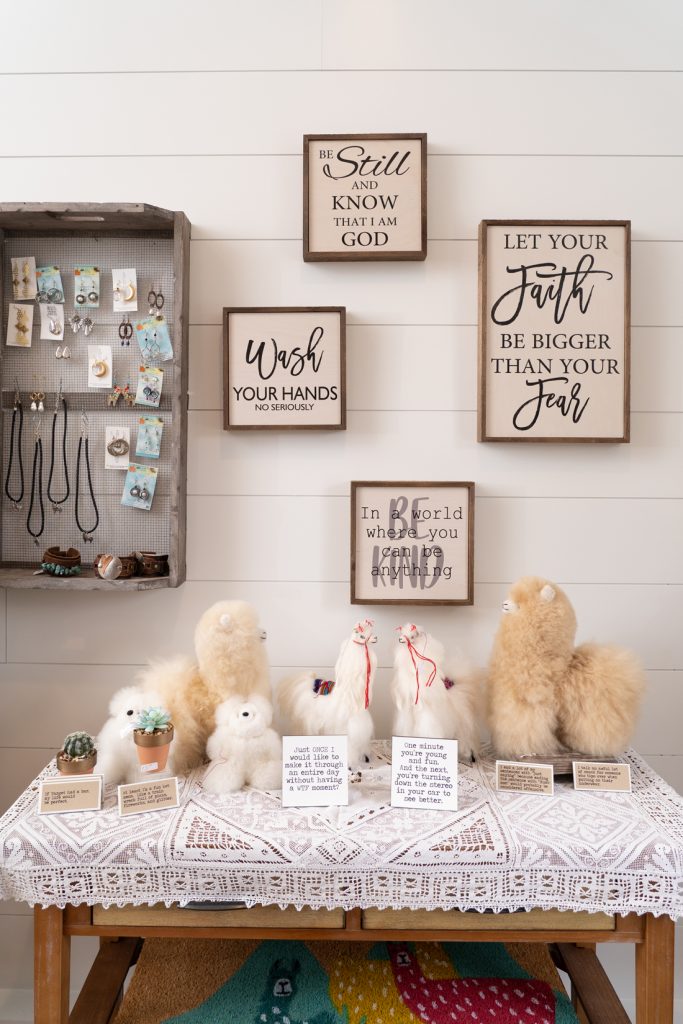 Admitting that some days she feels like she’s “100 years old,” Pamela and Mike are making plans for the future. “We’d like to take 20 acres and grow Christmas trees,” she says.

For the time being, however, she is devoted to her animals. “You know, if someone had told me 10 years ago that I’d be living on a farm and raising animals, I would have thought they were out of their minds. Ten years ago, I dressed to the nines everyday to look the part of a spa owner. Now, I muck around in boots, jeans and sweatshirts. But, you know what? I’m having the time of my life!”